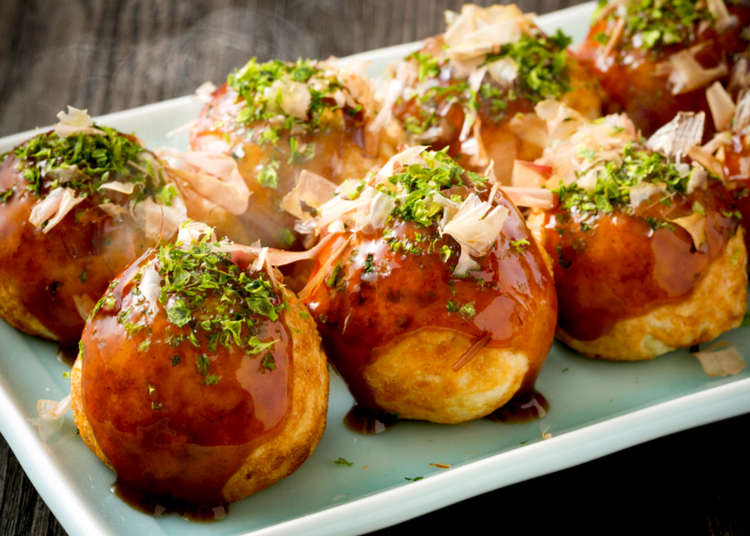 Japan is divided into eight major regions with a total of forty-seven prefectures, from the Okinawa islands in the southwest to Tokyo in the east and Hokkaido in the north, each unique in their customs, sights, and food cultures. The vast difference in geography and climates between each area has given birth to unique agriculture, resulting in the emergence of meibutsu, which are famous foods or dishes local to each area.

From Hokkaido in the North to Okinawa in the South, Discover the Best of Japanese Local Food

When traveling to different areas in Japan, people customarily buy and eat ekiben (short for eki bento, a local lunch box sold at train stations) or to bring home some meibutsu local to the region as an omiyage (souvenir) for friends, family, and/or coworkers. People tend to take a lot of pride in such meibutsu from their hometowns and for most people, it is common knowledge which meibutsu comes from each major city. For those who have moved away from their hometowns, these meibutsu can be a great reminder of the taste of home. 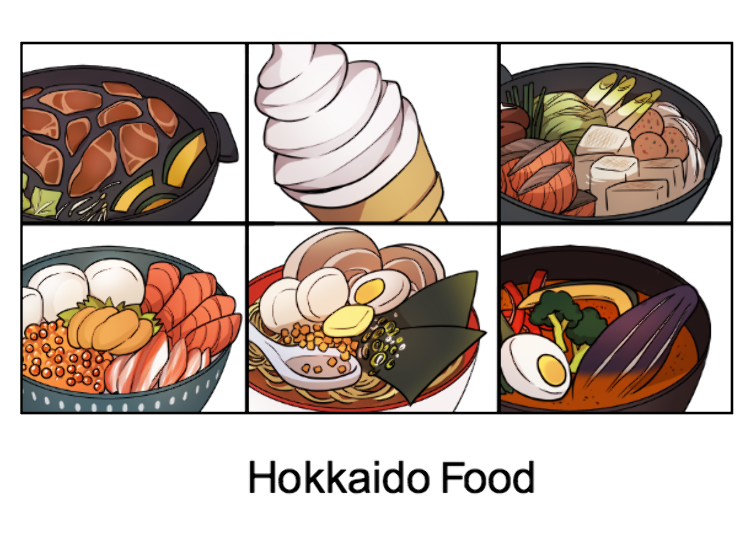 Located in the far north of Japan is Hokkaido, the prefecture so large that it is a region in and of itself. With snowy winters and pleasantly mild summers, this spacious prefecture is the source of some of Japan’s greatest agricultural products and seafood. One of Hokkaido’s most famous meibutsu is kaisen-don (seafood rice bowl). Imagine some of the freshest, high-quality seafood you’ve ever seen piled on top of a steaming hot bowl of rice. All of the best ingredients from glistening ikura (salmon roe) to sweet scallops and premium uni (sea urchin). Another meibutsu Hokkaido is well known for is its famous mutton-based meibutsu called “jingisukan” (Genghis Khan barbecue), which consists of grilled lamb and vegetables. 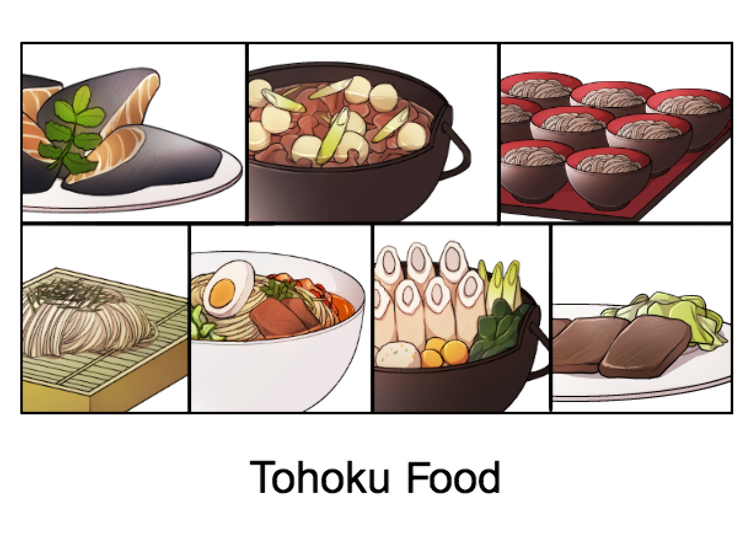 The Tohoku area, which literally means “northeast,” is divided into six prefectures, each with a plethora of good eats. Of Tohoku’s many delicious foods, one of the most famous food items is wanko soba from Iwate Prefecture, an all-you-can-eat meal featuring teacup-sized bowls of soba (buckwheat noodles). More of a challenge than a meal, the server will continually pour bite-sized portions into your bowl as you eat. They will stack the empty bowls so that you can later count how many you were able to down before you’d had your fill. When you are full, make sure to cover your bowl with a lid quickly, as some enthusiastic servers like to playfully force you over your limit.

Another one of Tohoku’s meibutsu is gyutan (ox tongue) from Sendai. Gyutan has a distinct meaty flavor and tastes great when grilled and eaten a la carte. 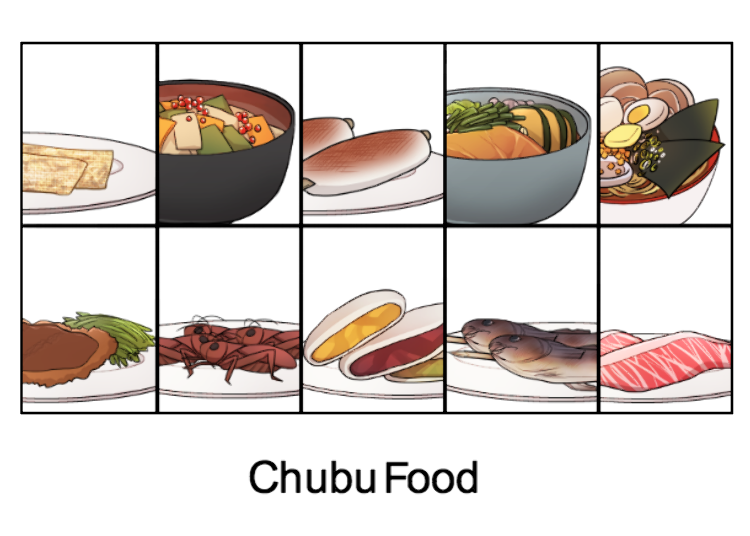 The Chubu, or “central” region, is made up of nine prefecture in the center of Japan. The Japanese Alps runs through the heart of this region, which has greatly influenced the type of meibutsu this area is known for. For example, oyaki, which are roasted dumplings from Nagano, are made with fermented dough and vegetables. Rather than rice or other grains, the dough uses buckwheat flour because the steep, mountainous geography of the alps make it difficult for rice to grow. Local ingredients such as mushrooms and seasonal mountain vegetables are used for the ingredients. Noppe from Niigata is another meibutsu that makes use of the mountain vegetables in the area. Noppe is a hearty vegetable stew eaten at New Year celebrations and other festivals.

Tokyo Day Trip Advice - Tips and Tricks to Make the Most of Your Time! 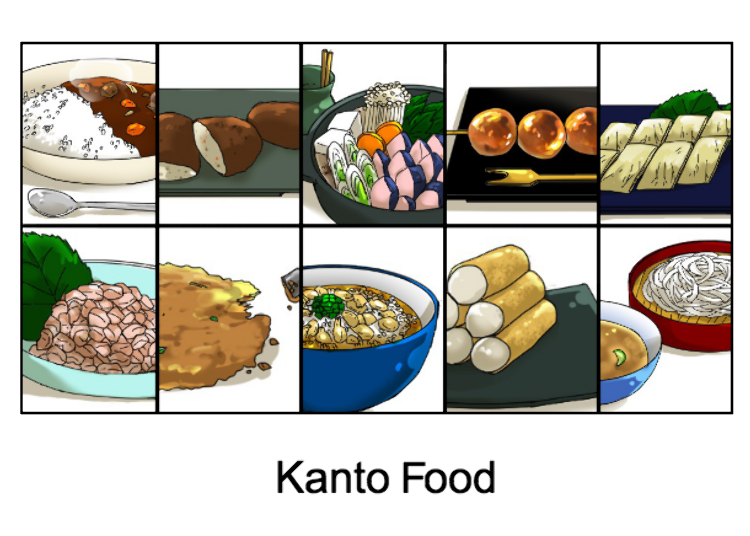 The eastern region of Japan is called “Kanto” and it is home to the nation’s capital of Tokyo, as well as six other prefectures, each with their own unique meibutsu. One such meibutsu is kaigun kare (navy curry), which originated in Yokosuka city in Kanagawa Prefecture. It’s a stew-like dish that was popular among sailors in the former Japanese imperial navy and has remained popular in Yokosuka to this day.

Yet another popular dish of the Kanto region is yaki manju (roasted steamed bun). As the name suggests, it is a steamed bun that’s filled with anko (red bean paste) and roasted. Many travelers find themselves at one of Gunma’s several famous hot spring resorts and it’s quite common to bring home yaki manju as an omiyage before heading home.

Also quite popular in the metropolitan capital of Tokyo, is monjayaki, Kanto’s version of the popular Kansai dish, okonomiyaki. Although both dishes are made by frying ingredients and batter on an open griddle, whereas Kansai’s okonomiyaki is made into a pancake-shaped dish, Kanto’s monjayaki ingredients are watered down, making them a kind of pasty texture to be eaten bite-by-bite with tiny spatulas. 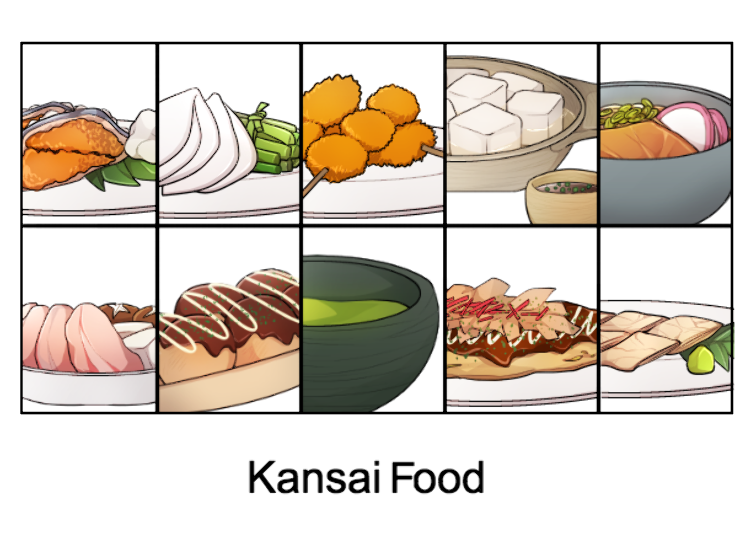 Not to be outdone by the Kanto region, is Kansai, or western region. This area is home to both Osaka, one of the largest cities in Japan, as well as one of Japan’s most traditional cities, Kyoto. It’s said that people from Kansai are true gourmets and their love for food is unrivaled by any other place in Japan. The meibutsu in the Kansai region are quite numerous, from the addictive street food of Osaka, such as takoyaki (deep-fried dough balls with Octopus meat) and okonomiyaki, not to mention the traditional foods of Kyoto that are centuries old.

In Kyoto, you can find tofu dishes such as yudofu (simmered tofu) and other soy-based dishes such as yuba (a tofu skin dish). The city of Uji, near Kyoto, is also the source of Japan’s finest premium matcha green tea. 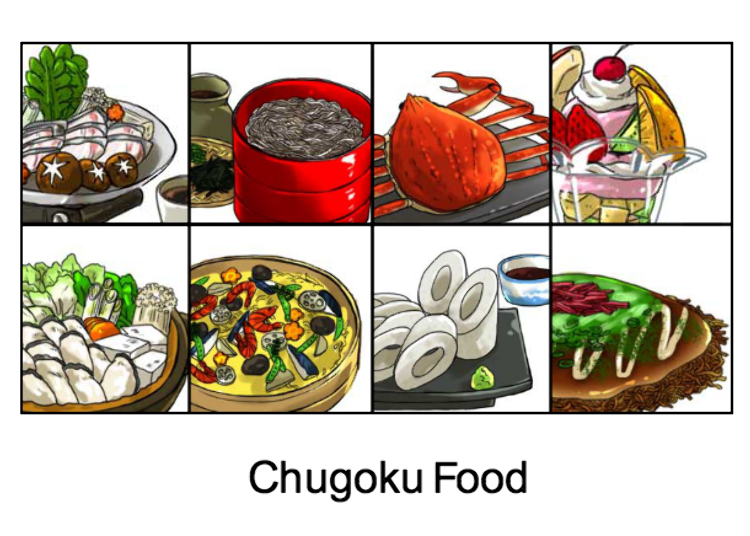 The Chugoku region is home to five prefectures known for their excellent seafood, due to their location between the Sea of Japan and the Seto Inland Sea. Tottori Prefecture, which is on the Sea of Japan side, is famous for its sand dunes as well as its delicious matsuba gani (snow crab). For those of you brave enough to try fugu (pufferfish), the dish in which professional cooks expertly remove the deadly poison from the fish’s meat, you can find this dish in Yamaguchi Prefecture.

Another area known for seafood is Hiroshima with their dote-nabe (oyster hot pot) with miso (soybean paste). For those who don’t care so much for seafood, the region has non-seafood meibutsu as well, such as succulent fruit parfaits from Okayama, Japan’s sunniest prefecture. 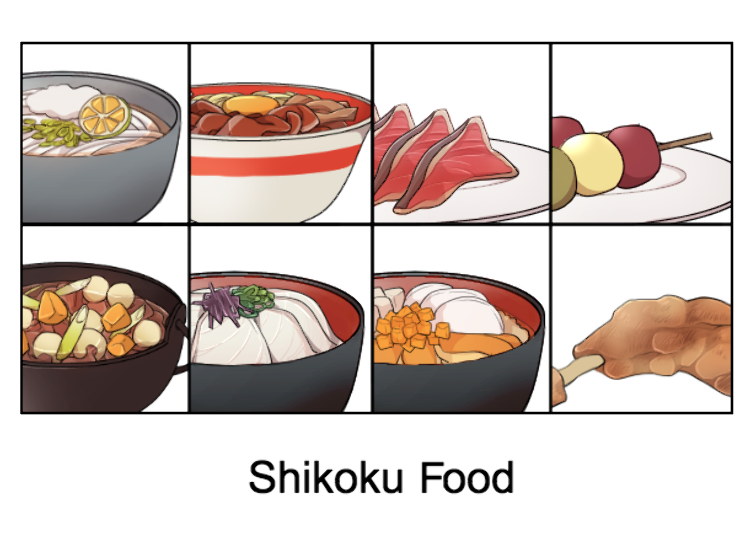 Shikoku is a small mountainous island made up of four prefectures that have developed their own very distinct cultures. Arguably the most famous meibutsu of the area is Kagawa Prefecture’s Sanuki udon, a type of udon with thick noodles that is named one of the “three famous udon noodles” of Japan. Also famous is a dish from Kochi prefecture called “katsuo no tataki”. It’s a lightly seared katsuo (skipjack tuna) fish fillet that’s thinly sliced and served with sliced leek, garlic, ginger, and ponzu citrus dressing. 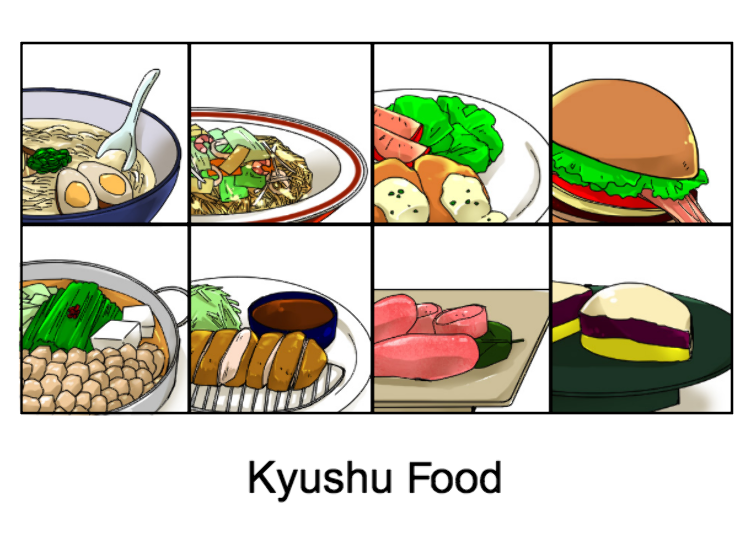 The southwesternmost of Japan’s four main islands is Kyushu, made up of seven prefectures as well as Okinawa to the south. As it is the top producer of premium grade Japanese kurobuta (black pork), many local dishes feature this ingredient such as tonkotsu ramen (pork bone ramen) from the Hakata region and tonkatsu (pork cutlet) in Kagoshima. Kyushu’s proximity to the rest of Asia has brought in a lot of overseas influences which is clearly reflected in meibutsu such as champon, a noodle dish from Nagasaki inspired by Chinese noodles, and spicy mentaiko (cod roe) which came to Fukuoka from Korea. 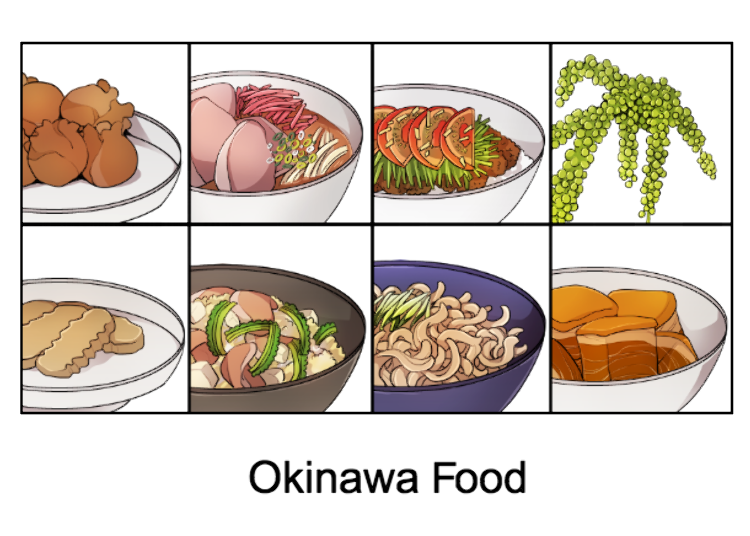 While technically part of the Kyushu region, Okinawa, located over 600 km south of Kyushu, is a group of islands with its own traditional culture and local foods. Rich in delicious fruits, one of the most well-known meibutsu in Okinawa is goya which is a bitter melon that is the main ingredient in a stir-fry dish called “goya champuru.” Umibudo (sea grapes) are another food unique to Okinawa. The tiny grapes are actually clusters of seaweed that burst with a salty yet refreshing pop with every bite.

Additionally, as Okinawa has a strong American Navy Base influence, the area has a number of Tex-mex inspired food as well, such as taco rice, something of a taco salad served over rice. Taco rice from Okinawa is so famous that make-at-home taco rice kits are a popular meibutsu to bring home as omiyage, and it’s served in cafés all throughout Japan as well.

The Japanese meibutsu culture makes it easy to differentiate and access different foods from different areas. Be sure to sample some of the best foods that every region has to offer as you travel and don’t forget to bring back some as omiyage for your friends and family as well!