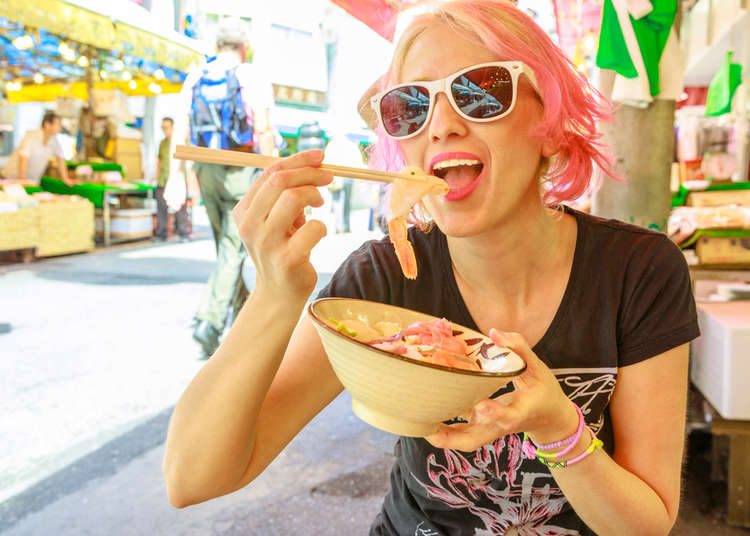 10 Japanese Seafood Varieties That You Should Try At Least Once

Japan is famous for a lot of things, and Japanese seafood is definitely one of them! Surrounded by bountiful oceans in every direction, the country has brought forth amazing seafood creations, both modern and traditional.

Sushi, while undoubtedly the famous one, is but one dish of many Japanese seafood specialties – but what exactly goes into these dishes? What do Japanese fishermen generally have in their nets and what tasty marine treats await on seafood restaurants’ menus all over Japan?

Here are 10 must-try Japanese seafood varieties, for foodies and beginners! 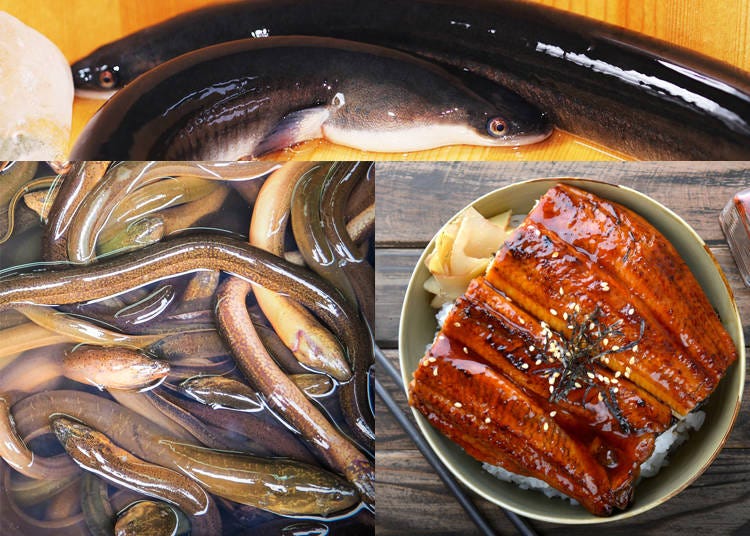 Unagi is eaten since a long time in Japan. It is preferably sliced, grilled, and served on a bed of rice as “unagidon” with rice in a round bowl, or “unagi no kabayaki,” which is just the grilled eel on a plate.

Another dish is called "unaju," which is a layer of rice in a lacquered box topped with eel.

Many people compare the taste of unagi to that of chicken, because of its somewhat dense consistency. Eel has a reputation of being a summer food because it is said to fend off exhaustion from heat, so its prime time is during summer.

Unagi specialty restaurants serve it year-round, however, and because it is grilled, it’s an excellent choice for seafood beginners. The only downside: unagi is fairly expensive.

Unagi is rich in:

Vitamin B
Vitamin A

A Guide to Japanese Grilled Eel: Unagi no Kabayaki 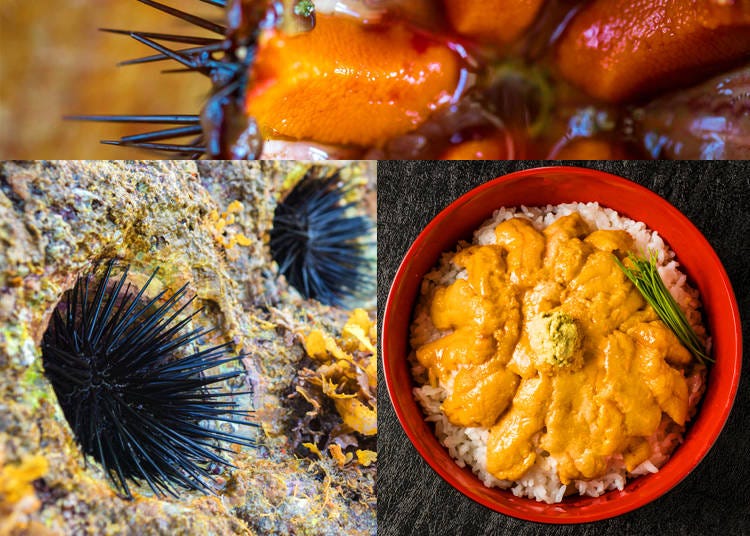 Uni actually refers to the edible gonads of sea urchin and is considered a delicacy in Japan! Generally, uni is enjoyed raw as sashimi or as a sushi topping and tastes best with a bit of soy sauce and wasabi.

The taste is sometimes rather briny and its creaminess might surprise many a foodie, and even in Japan, uni is often considered an acquired taste. If you want to try it for yourself, uni is on the menu of basically every Japanese seafood and sushi restaurant and market all around and is said to taste best in Hokkaido.

Uni is rich in: 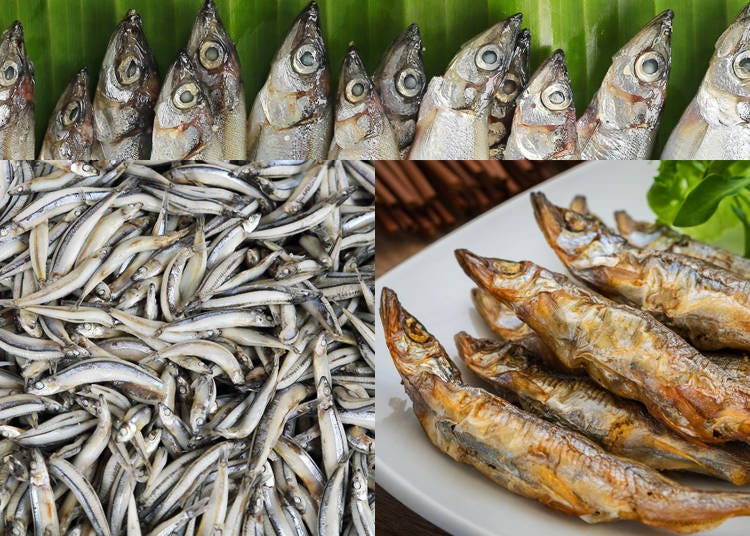 Shishamo is a small saltwater fish that resembles a willow leaf, which is the direct translation of the little fish’s name.

They are usually grilled or fried with the roe still in the fish, making for a surprise when biting into them! As a very popular izakaya dish with a mild taste and exquisite crispiness, enjoy them with a cool glass of beer. People who aren’t fans of roe might want to stay away from shishamo – everybody else, give it a try!

Shishamo is rich in: 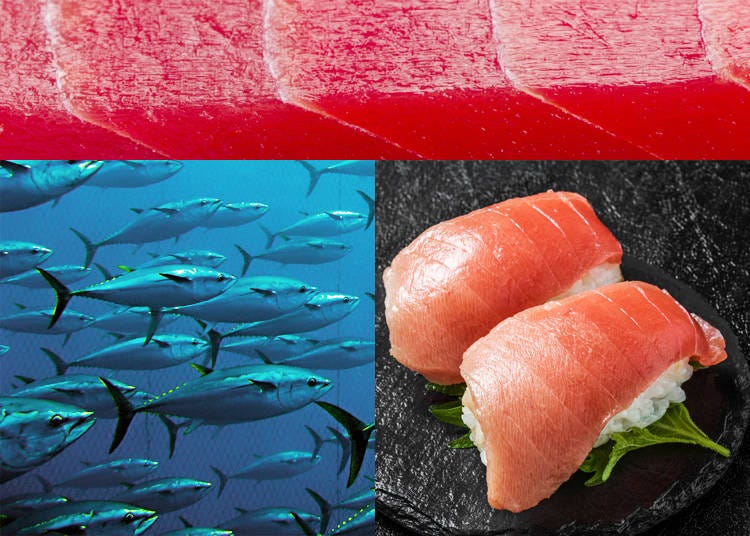 Maguro is a Japanese seafood delicacy that is as tasty as it is versatile. Its meat is classified in different kinds: akami (lean meat from the sides), toro (fatty belly), chu-toro (fatty side), o-toro (fattiest underside).

One of Japan’s most popular sushi toppings and sashimi, maguro can fetch a very high prize on fish markets. This is an absolute must-try when in Japan and suitable for pretty much everyone, so head over to the nearest sushi restaurant!

Maguro is rich in:

[MOVIE] From Tuna to Sushi: Visiting the Tuna Cutting Show and Tasting Fresh Fish in Tokyo 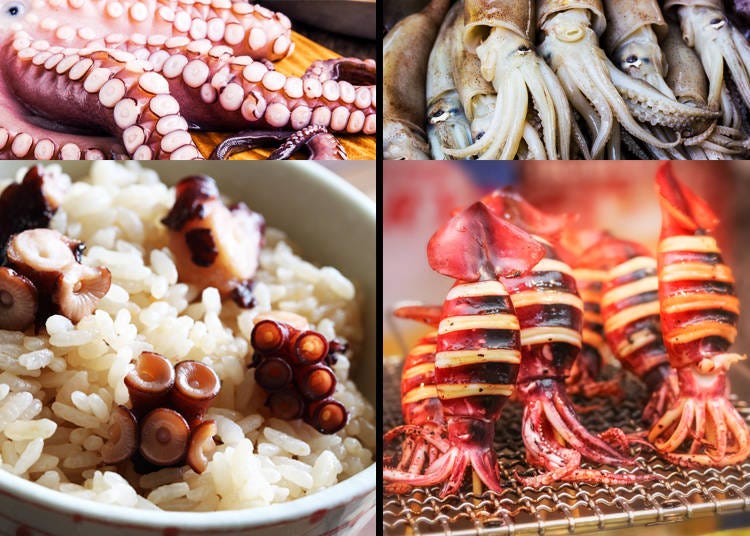 Ika is squid or cuttlefish, while tako refers to octopus.
As for ika, the mantle generally is the part that is eaten, and the somewhat transparent meat has a mild flavor and firm texture. As sushi and sashimi, ika is generally enjoyed raw. Dried squid, however, is a popular, healthy snack that you can buy in every convenience store!

Ika is rich in:

Raw tako, on the other hand, is a fairly rare sight. In general, steamed octopus is used for all kinds of sushi, sashimi, and other Japanese seafood dishes – if the color of the skin is purple, you know the tako has been steamed. Grilled versions are also a popular menu item.

Tako is rich in: 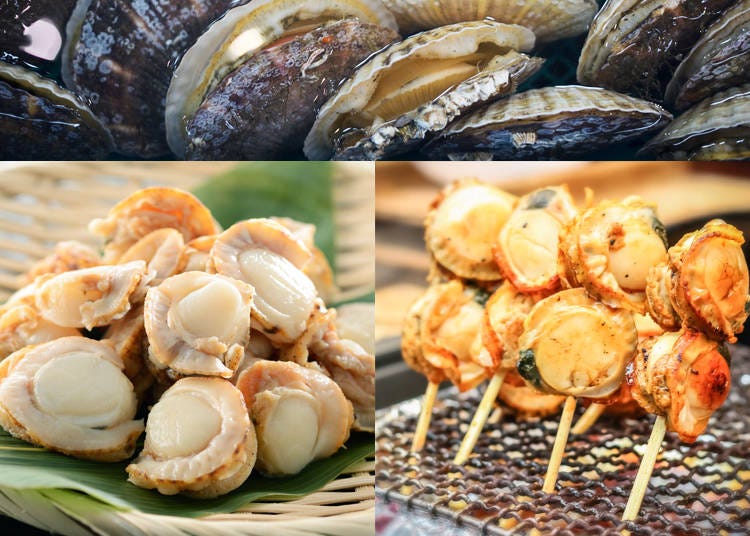 While scallops are a beloved shellfish all around the world, Japan likes to enjoy its hotate raw on sushi and as sashimi.

In teppan (table grill) restaurants, they are also a very popular dish and make for an excellent grilled delight. The shellfish has a soft, sweet taste and is a safe choice for everyone who’s a bit suspicious of seafood, even in its raw state.

Hotate is rich in: 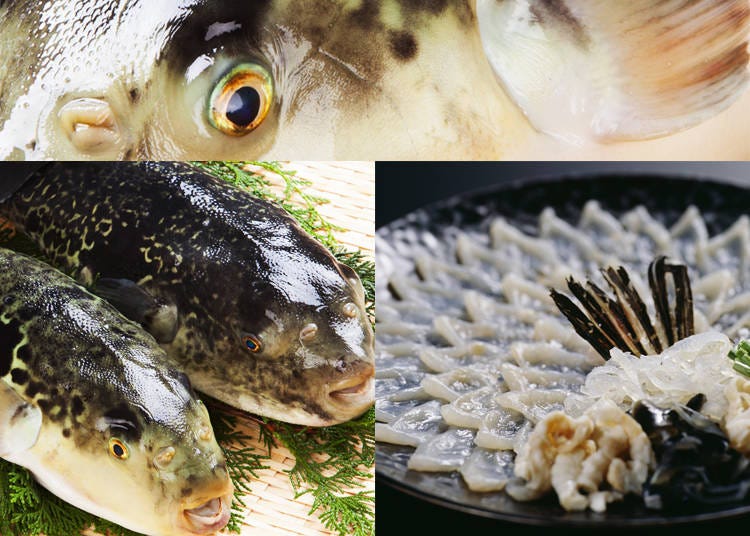 Ah yes, the enigmatic, dangerous fugu is notoriously poisonous! For everyone who wants to test their courage and try real pufferfish, visit Japan in winter – then it’s fugu season.

Handled as a delicacy, pufferfish actually has a very mild taste and is generally served raw. Please do make sure to eat it at a certified restaurant, as a pufferfish's poison shuts down your nervous system and you really don’t want that to happen.

Fugu is rich in: 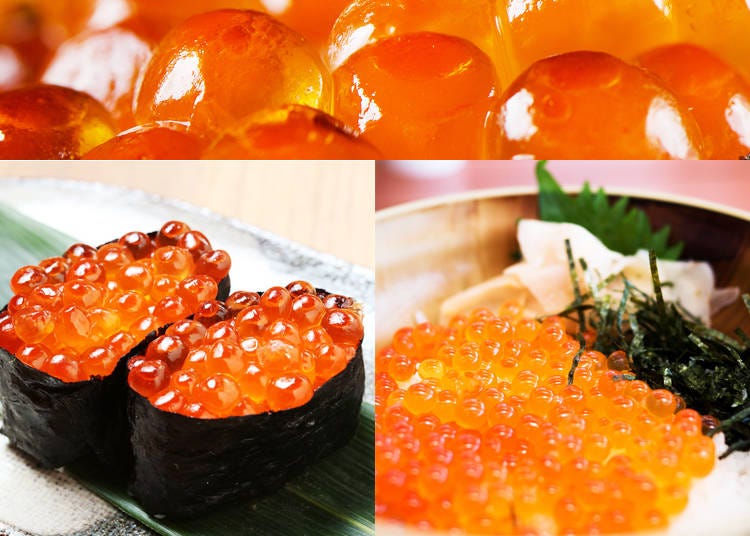 Ikura, the bright orange salmon roe, is a favorite topping of sushi and rice bowls. Also referred to as “red caviar,” ikura is commonly eaten and not considered a luxury food at all – if anything, it’s a Japanese seafood staple that belongs in every “kaisendon,” or seafood bowl.

Salmon roe has a fresh, salty, and mildly briny taste to it and we do think it is a good seafood for beginners – try a tablespoon, for example at the Tsukiji Market right from a seafood stall, and see how you like it!

Ikura is rich in: 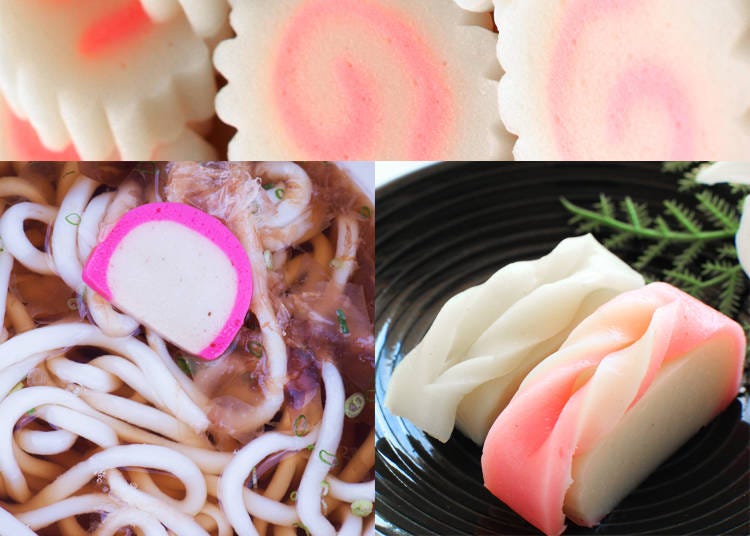 Kamaboko is a “nerimono,” or fish paste product. It is made from fish that is first pressed, then steamed, and thus has a springy texture and only a slightly fishy taste to it. The fun thing about kamaboko is that it comes in all sorts of shapes and colors, but you might know it best with a purple swirl in the middle – that particular kind is called “Naruto” and a staple ramen topping. Kamaboko can be bought at every seafood market and in every supermarket.

Kamaboko is rich in: 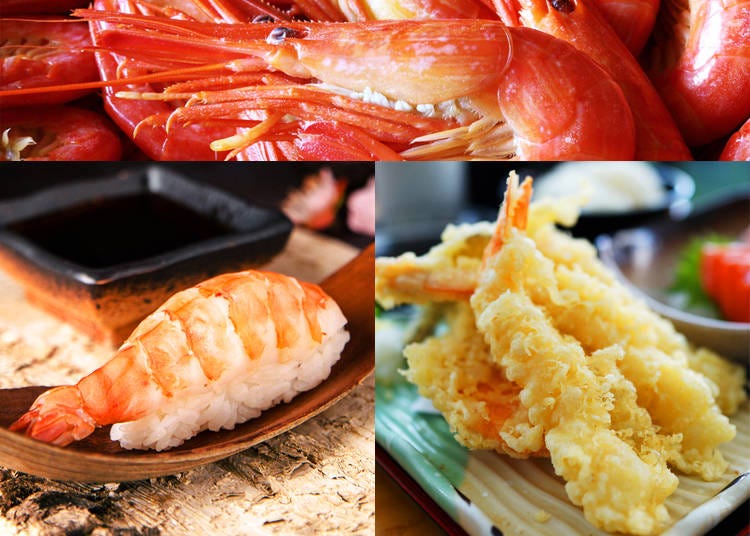 Shrimp might not sound too exciting at first, as you’re likely to have it encountered in numerous dishes of all kinds of cuisine.

Japan, however, has a ton of amazing ebi dishes – from raw on sushi, grilled on a teppan, to crispy and juicy as tempura. As long as you’re not allergic, Japan is a true paradise for both shrimp experts and beginners – especially for the latter group, we highly recommend ama-ebi (sweet shrimp) tempura at a proper tempura specialty restaurant.

Sweet shrimp (ama-ebi) is rich in:

No matter whether you’re a Japanese seafood veteran or have just begun your gourmet journey under the sea, so to say, Japan is a treasure trove of marine delicacies of every shape and taste.

Raw, grilled, or fried – we urge you to go on a real Japanese seafood adventure with our ten must-try tips! Which one will be your favorite?

Fresh Fish for Seafood Lovers: The Best Seafood Bowls in Tokyo
Numazuko Kaisho in Ueno: Fresh All-You-Can-Eat Seafood Delights for Just US$12!?
Mouthwatering Fresh Tuna & More! Locals Swear By These 5 Secret Japanese Seafood Spots Near Tokyo
*This information is from the time of this article's publication.
*Prices and options mentioned are subject to change.
*Unless stated otherwise, all prices include tax.