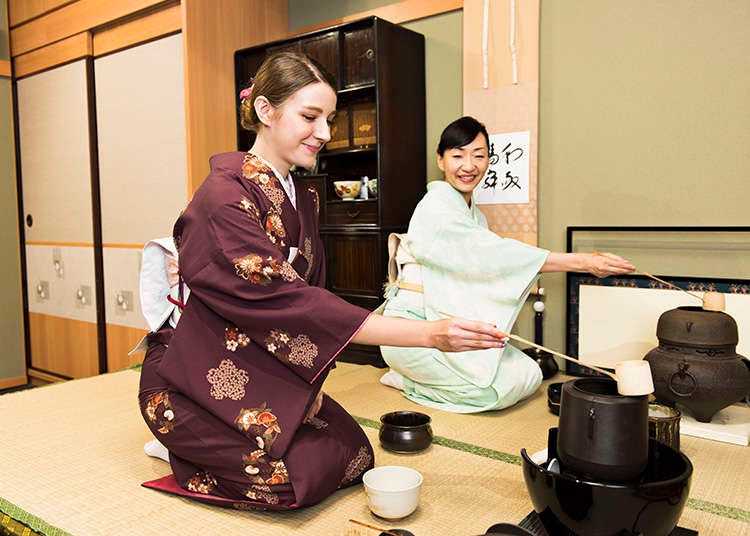 The Way of Tea - this is what sado literally means. Also often referred to as cha no yu, the Tea Ceremony is a crucial and famous part of Japanese traditions. Every move is coordinated, every move has a meaning - understanding The Way of Tea is not an easy endeavor.

Look up establishments by Tea Ceremony

The History of Sado 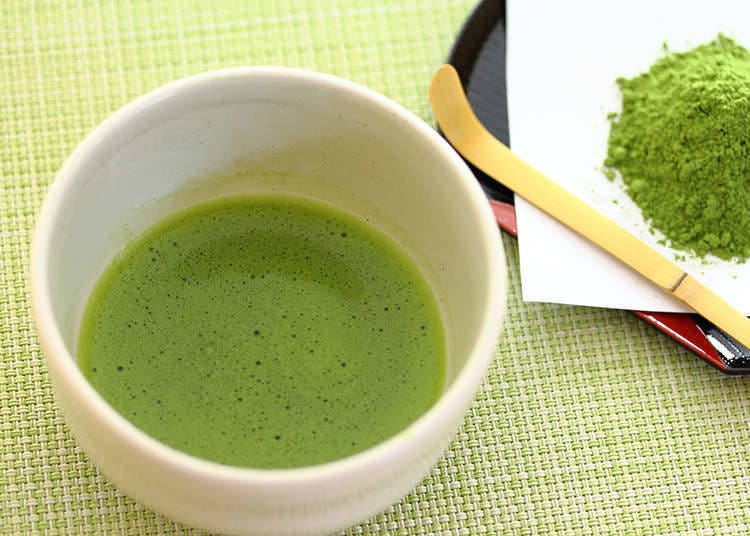 The tradition of the Tea Ceremony dates back to the 9th century. The Nihon Koki, one of the most important texts of Japanese history, tells the tale of the Buddhist monk Eichu who, after returning from China, personally served sencha (unground green tea) to the emperor in the style of what then, over the span of roughly 700 years, became known as sado. Originating from China, the Japanese Tea Ceremony underwent evolution during the years, developing its own style, specifics, and rites.
The strongest influence to what can be called the spirit of sado was undoubtedly Zen Buddhism during the 16th century. Its teachings and principles were integrated in the way of serving tea, consolidating the practice as it is known today. While originating from sencha, the ceremony began to be centered on matcha (green tea powder) over time.

The Philosophy of Tea 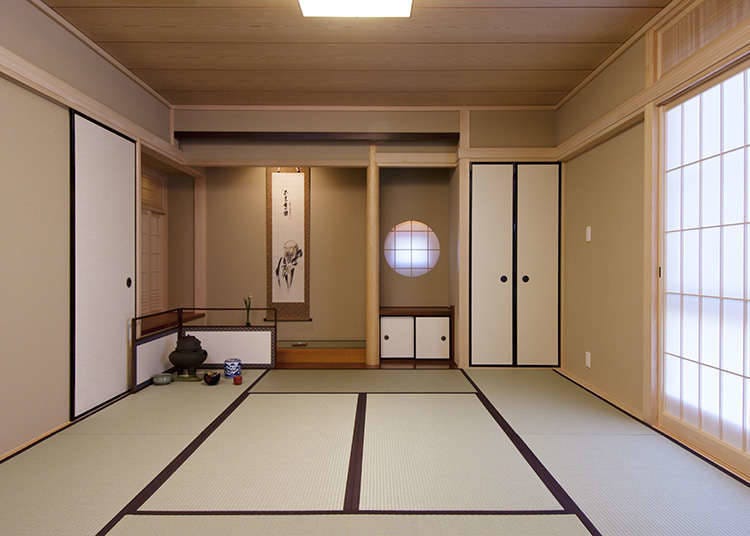 Looking at the Tea Ceremony, wabi-sabi, the Japanese philosophy of beauty in evanescence, is ever-present in this tradition. It is not solely about serving tea, after all. Sado revolves around the mindset while serving the tea - it is a mental discipline to pursue the philosophy of wabi-sabi. The utensils, like jugs, cups, and bowls, are intentionally kept simple and without decoration. More than often, they even have an uneven shape or a little dent and this is fully intended. Beauty is found in imperfection after all. Accepting this fact, the ceremonist honors imperfection by pouring their whole heart into serving the tea while having a calm, content state of mind. 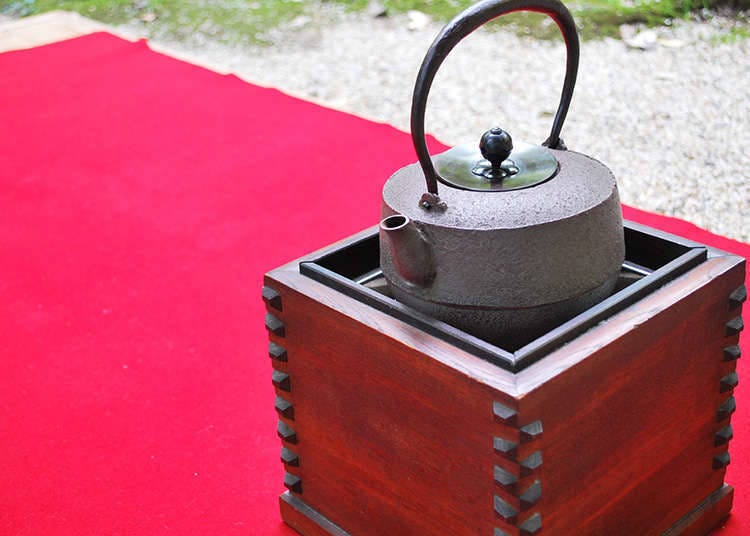 What is needed for the Tea Ceremony?
・Fukusa – a two-ply silk cloth used for cleaning the tea utensils.
・Kaishi – a small piece of washi, or Japanese paper, on which the sweets are served on. It can be placed next to the guest when not being able to eat all of the sweets. When drinking weak matcha, the bowl is wiped clean with one’s finger, which is then cleaned with the kaishi. After drinking strong tea, the kaishi is used to wipe the bowl directly.
・Chakin - a small, rectangular cloth that is used to wipe the tea bowl.
・Tea Caddy (natsume) - a small, lidded container in which weak powdered tea is kept.
・Porcelain Caddy (chaire) – a porcelain container that is used to store strong powdered tea.
・Tea Scoop (chashaku) - used to scoop tea from the caddy into the bowl that is usually made out of bamboo.
・Tea Whisk (chasen) - used to uniformly distribute the powdered tea in the hot water.
・Tea Cloth (chakin) – a wet linen cloth used to wipe the tea bowl.
・Tea Bowl (chawan) - depending on the season in which the ceremony is held, the size and style of the tea bowls used in the ceremony varies.
・Ladle (hishaku) - used to pour the water. During summer, it is smaller, and in winter, it is larger. Just like the tea bowl, its shape and size varies with the passing seasons.
・Tea Kettle (chagama) - used to boil the water. 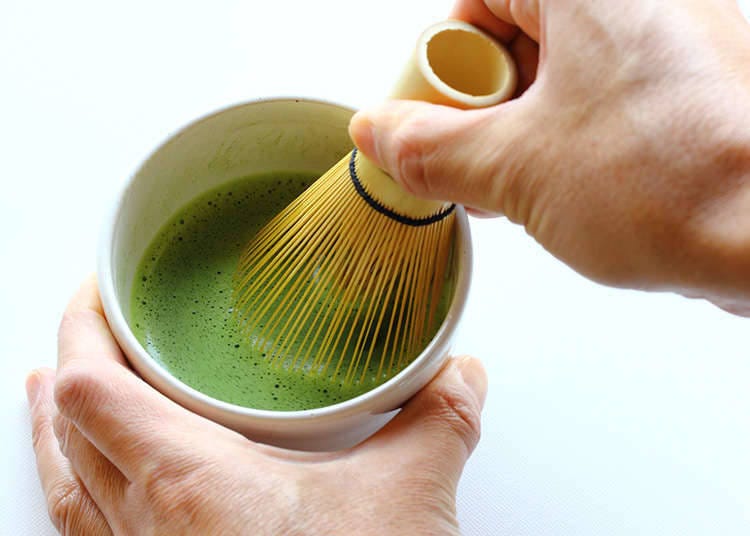 Every sado school has its very own sequence of serving the tea. Doing all the different actions in a full Tea Ceremony is called temae. The following describes a short, general procedure that does not feature any specific actions based on school, season, or time of day:

Apart from a perfect performance while serving the tea itself, there are certain other things that play a big role when performing sado:
・The Tea Room: the ceremony cannot be performed anywhere. A Tatami room is necessary - the placement of the mats determines the position of host and guests, for example.
・Clothing: to honor the ceremony, formal wear is a must. While the host will mostly always wear a kimono, depending on what kind of ceremony is held, guests are also allowed to wear Western formal wear, like a suit, if not a kimono.
・Hanging Scroll: a hanging scroll can be found in the alcove called tokonoma. They usually display a painting or calligraphy, always a reference to the ceremony itself.
・Flower Vase: hanaire is a generally small vase containing a flower arrangement, displayed in the tokonoma. Seasonal flowers are used alongside bamboo, rattan, or ceramics.
・Meal: fresh, seasonal ingredients are used to serve a small meal that is used to stress the season the ceremony is held in.

The Tea Ceremony is not something that can be learned easily. While understanding and following the sequence is a matter of remembering what to do, the required mindset for sado is an entirely different matter. Performing sado correctly requires an understanding and acceptance of the philosophy of wabi-sabi. Students learn from older students who are exclusively taught by an official teacher.
If one desires to learn the Way of Tea, a "circle" must be joined. These sado circles exist as private schools or societies. In Japan, usually every Middle or High School has a Tea Ceremony Club that dedicates itself to sado.

Look up establishments by Tea Ceremony
*This information is from the time of this article's publication.
*Prices and options mentioned are subject to change.
*Unless stated otherwise, all prices include tax.