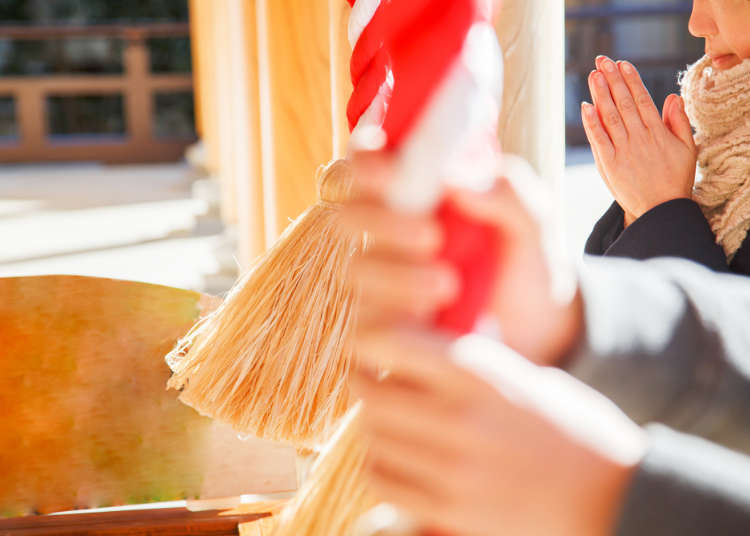 Omairi: Worshipping at Shrines and Temples

A Shinto shrine is a place of worship to the honored ‘kami,’ deities of Shinto, just as it is a home to the kami enshrined within. The most common name of a shrine is ‘jinja’ 神社, which literally translates to “place of the kami.” Depending on which kami the shrine is built for, it features very distinctive elements and rituals performed at the shrine itself. It can either be dedicated to a local deity that is believed to reside in and protect the area the shrine is built in, or to one of the major Shinto kami that are worshipped without local boundaries.

A Buddhist temple, on the other hand, is dedicated to and enshrines a Buddhist deity. In the past, monks were trained at the many temples throughout Japan, but today they are mainly a place for worship. While there are certain similarities to shrines, they do have their very own rules to follow.

Shinto shrines and Buddhist temples may have a lot of things in common but nonetheless are different religious facilities. A shrine, example, is the home of the deity enshrined within, while a temple is first and foremost a home to monks to live, work, and study. Since the philosophy and way of thinking is different in Shinto and Buddhism, the way of worship is also a different one. Let’s take a closer look.

Entering the Realm of Shinto and Buddhism 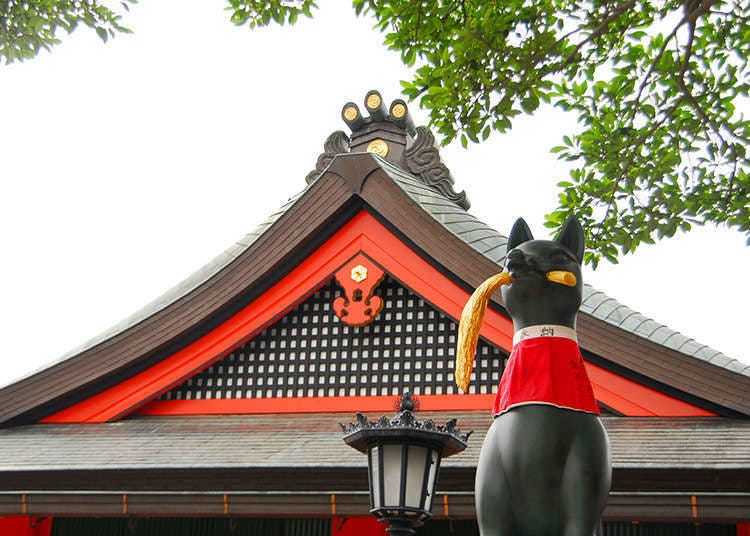 A shrine or temple visit is called omairi. It follows a strict routine to not only to calm one’s heart, but also to please the kami residing within. Certain steps need to be followed when one wants to properly visit a shrine or temple and communicate with the kami or Buddha within.
When you’re visiting a shrine, you enter its precincts by going through a gate, called a torii. This gate both marks where the realm of Shinto kami begins and separates it from the secular world. The precincts Buddhist temples are entered via a gate called ‘sanmon.’ By entering the grounds through either gate, you are stepping onto sacred grounds: be aware of this. Prepare your mind and your heart, calm yourself, and appreciate everything around you, be it visible or not.

Purification at the Temizuya 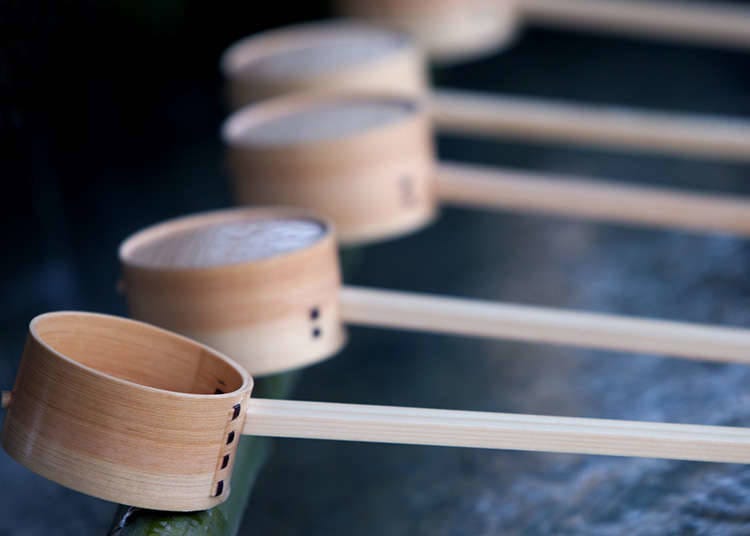 Every shrine and temple features a water basin, called a ‘temizuya’ or ‘chōzuya,’ at which worshipers are supposed to purify themselves, literally and figuratively. This purification follows a strict order:
1 - First, take the wooden ladle in your right hand, fill it with water, and pour the water over your left hand.
2 - Take the ladle in the left hand and clean your right hand respectively.
3 - Then, pour water into the palm of your left hand, bring it up to your face and rinse your mouth. To not drink the water; instead, spit it out again.
4 - Clean your left hand once more. Then, lift the ladle in a vertical position to clean it with the remaining water before putting it back.

[MOVIE] Visiting a Japanese Shinto Shrine – Everything You Need to Know, Step by Step! 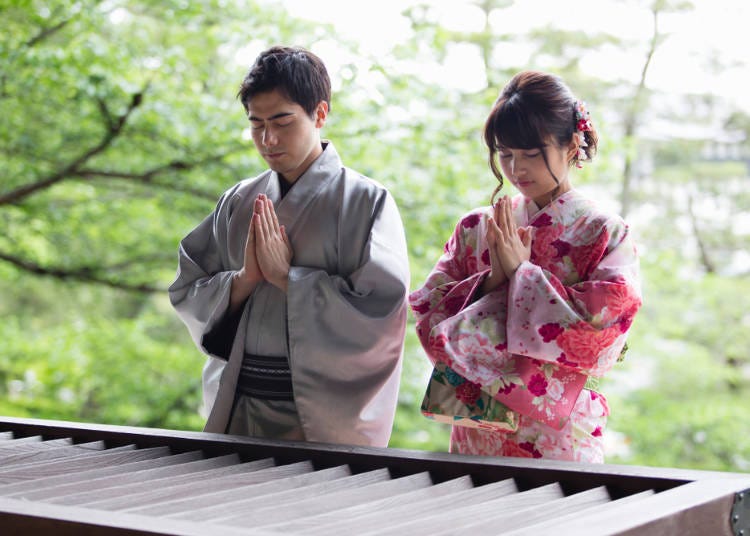 Just like the purification, the actual worship is also ritualized. A general rule of thumb when going to a shrine and temple to worship: in a shrine, it is always two bows, two claps, one bow. At Buddhist temples, however, there’s no clapping at all.

Praying at a shrine:
1 – First, throw a coin, usually 100 or 50 yen, in the offering box.
2 - Should there be a bell or gong, ring it firmly for a few times, as this helps get the attention of the kami. Then bow twice, deeply, at 90 degrees. After bowing, clap your hands twice. Should you want to pray, do so after clapping – and do it quietly. Kami do not require spoken words.
3 - After you are done, bow one more time, just as deeply as before.

Praying at a temple:
1 – Throw a coin in the offering box.
2 – Should there be a temple gong, ring it firmly for a few times. Instead of clapping, just press your hands together in front of your chest and pray quietly.
3 – Bow once after you are done praying.

While the terms “prayer” and “praying” are often used to explain the ways of worship at both shrines and temples, the kind of praying is actually quite different depending on whether you’re at a temple or shrine.
At a shrine, people usually wish for happiness during their life or even specific situations, such as exams or job interviews. At a temple, however, people pray for entering paradise in the afterlife. Apart from that, shrine worship is generally linked to purifying oneself of impurities, while temple prayers are often reflections upon one’s behavior and vows to improve it from now on. 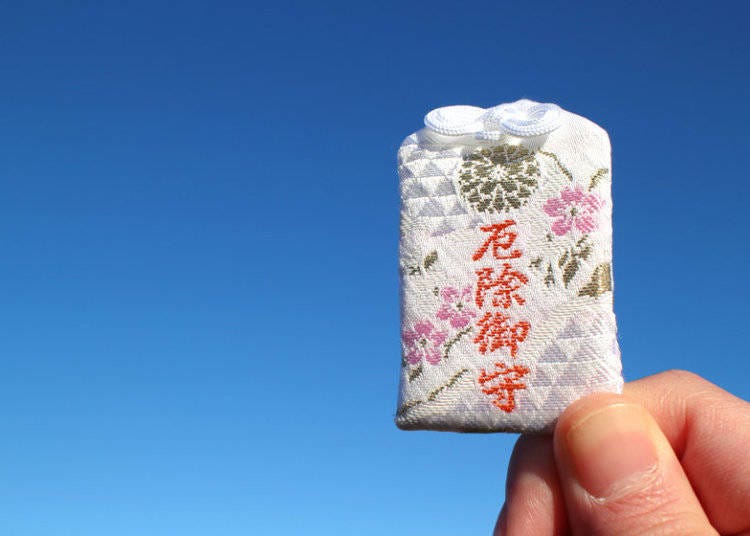 The most popular lucky charm in Shinto belief is undoubtedly the ‘omamori.’ Dedicated to a variety of different wishes and events, such as, studies, health, or love, an omamori basically a protective charm enclosed within a tiny, colorful bag of cloth. Typically, they are either carried around by one person at all times, as a phone strap or on a bag, for example, or are affixed to a certain location – in one’s car or at one’s desk, to name two of them.
Another thing to be purchased at shrines is the ‘omikuji.’ These are little strips of paper drawn from a wooden box for a small offering to the temple or shrine, functioning as some form of fortune lottery. Blessings concerning things such as health, business, marriage, and so on are written on the paper, predicting different fortunes – but beware, you can also get cursed! Curse papers are usually tied either to a tree or a wall provided by the shrine or temple. By doing so, worshipers put their fortune in the hands of the kami or Buddha of the place so that the curse can be avoided.

While a good majority of the newer Japanese population would not consider themselves particularly religious, Shinto and Buddhist customs and rituals still play an important role in Japanese day to day life, with shrine and temple visits leading the way. Experiencing these worshipping rituals is sure to offer a unique, authentic glimpse, not only into old Japanese philosophies and traditions, but also on the modern society of the 21st century.