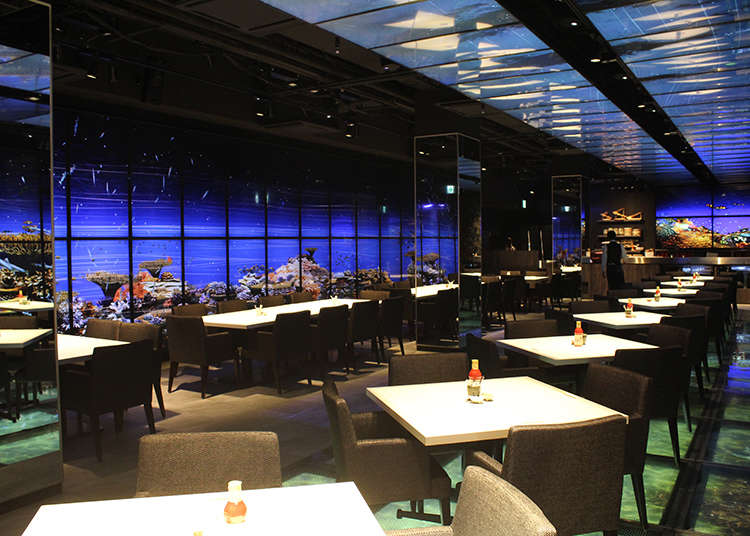 During the last century, Tsukiji achieved global fame as the home of Tokyo's most venerated fish market. Since the market uprooted to Toyosu in the Tokyo Bay area at the end of 2018, Tsukiji is now in the throes of revitalization.

The newest seafood restaurant on the block, Nazuki, encapsulates the essence of this project aimed at breathing new life into the area. It's a fusion of traditional, refined seafood cuisine and the latest trends in digital art technology. Together they create an experience that is genuinely unlike anything else in the city. 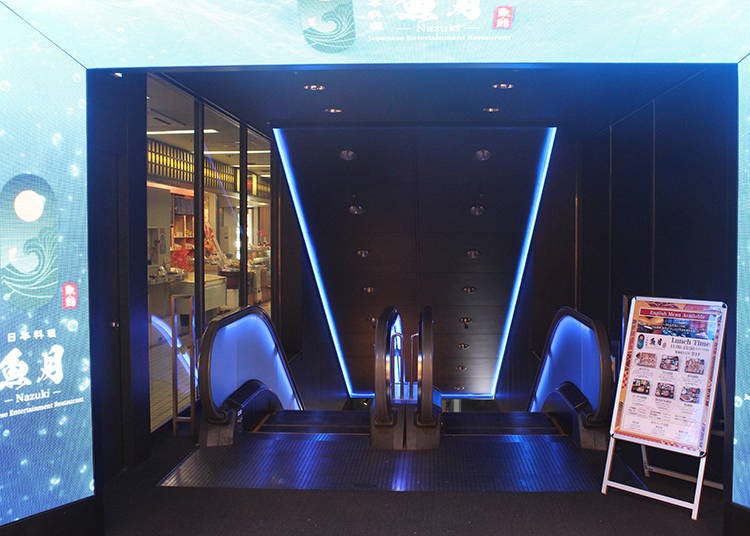 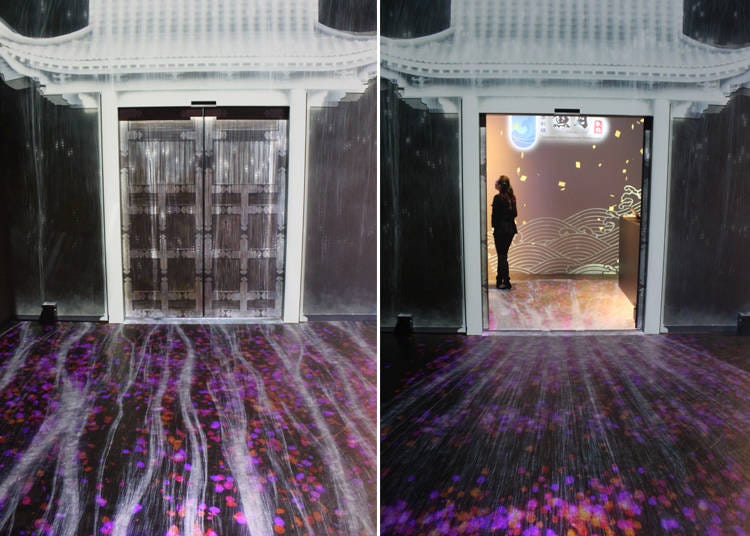 The sliding-door entrance hides behind a digital projection of an ancient temple doorway which opens into a sprawling dining space of 90 seats, and tables separated by shimmering bead curtains. 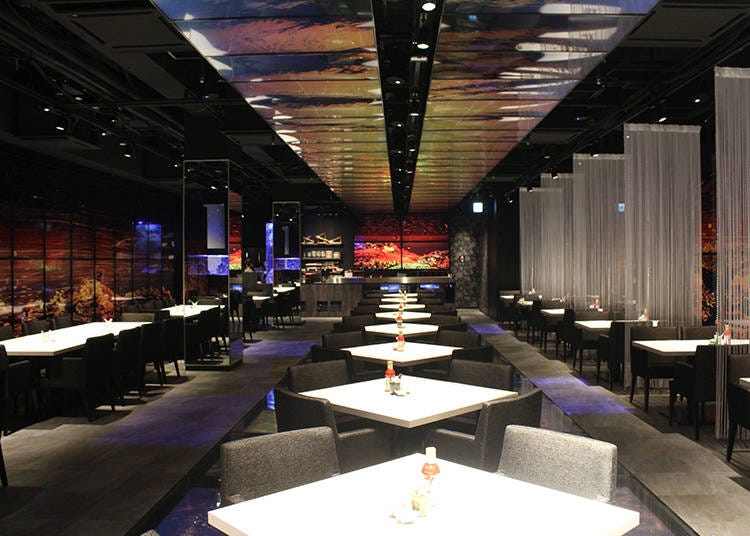 What immediately catches the eye however, are huge screens running the length of the shop perimeter, and fish tanks filled with a striking array of aquatic creatures. The surrounding wall screens, equally alive, are populated by digitized marine life aimlessly toing and froing in the deep. More screens run in strips along the floor and on the ceiling, projecting the seabed and water's surface respectively. Immersion is clearly a key component of the restaurant's concept. 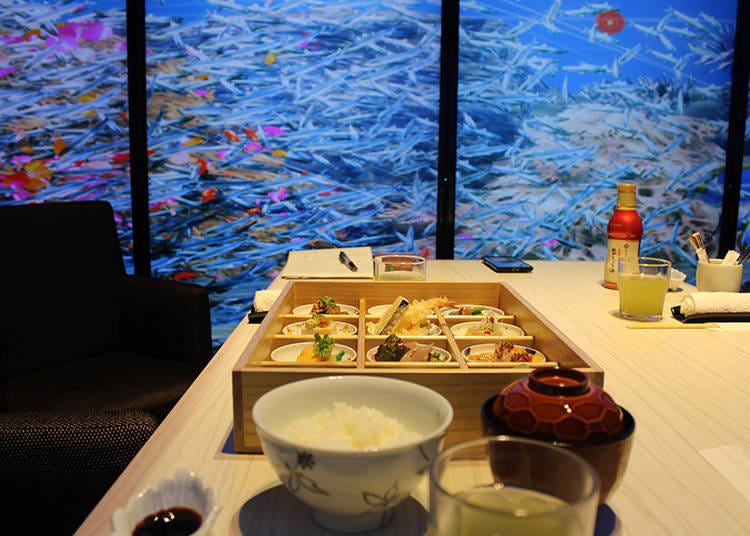 At Nazuki customers dine in the company of digitally-rendered whale sharks, schools of dancing fish, majestic rays, weaving jellyfish, drifting sea turtles, and lolling corals. The screens housing the fish are also interactive: touching them activates multi-colored floral projections that burst forth in states of quiet ecstasy.
The screens operate on a high-speed day/night loop using different color palettes to express the passage of time. The visuals are accompanied by a newly-composed ethereal, woodwind soundtrack, lending itself to the calming aura of the restaurant environs.

The Concept: Fusing Old and New 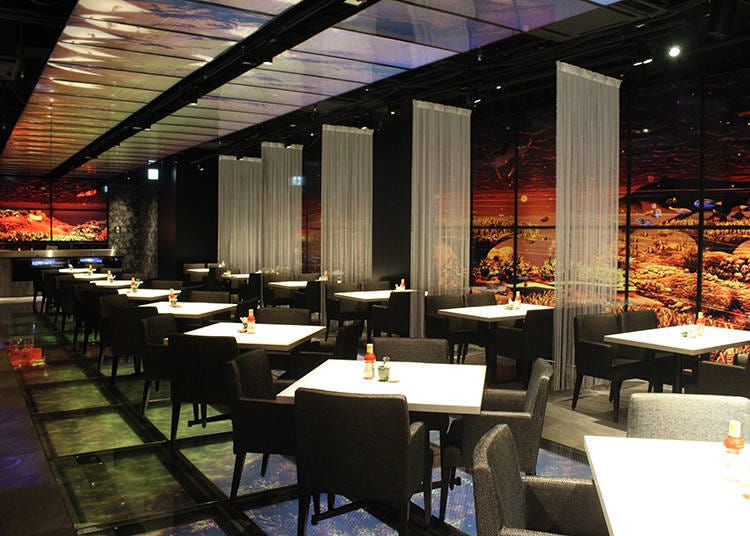 The inspired design and artistic concept focus on marrying modern high-tech designs with old Japanese folktales; a throwback to the traditional reputation of the neighborhood. Nazuki's manager, Yamamoto san, says: "We wanted to present these traditional stories to a new audience through a modern and interactive experience". 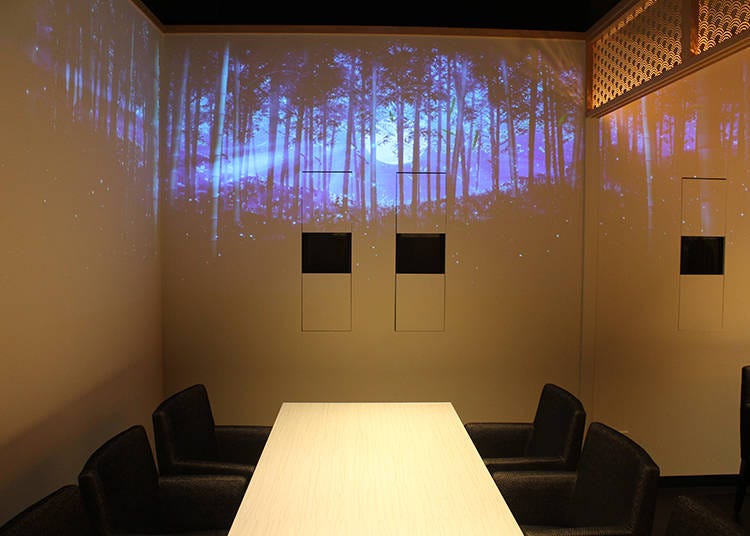 Urashima Taro, a famous protagonist from Japanese folklore who carried a rescued turtle to the Dragon Palace beneath the sea, features heavily in the digital narratives at Nazuki. Likewise, The Tale of the Bamboo Cutter, which celebrates the story of Princess Kaguya-Hime, provided inspiration for the restaurant's wall art. Yamamoto san adds that, "We want to create a story book of these tales in the future for customers to take home".

While the focus in the main dining room is on the life beneath the surface, there are other spaces in the restaurant which depict different classical narratives (including The Tale of the Bamboo Cutter). There are two private VIP rooms for parties of up to 10 near the front-of-house, draped in interactive hanging wall scrolls. Another dining room at the back, features permanent artworks coexisting with dynamic light projections. 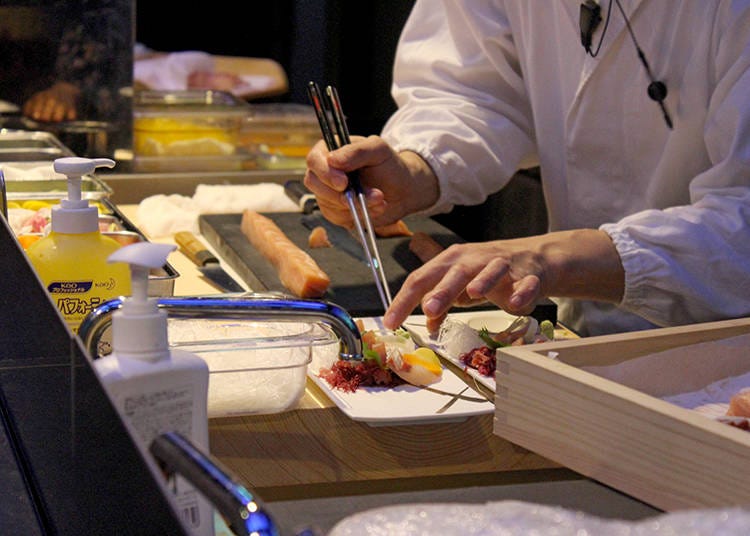 Thankfully, Nazuki is far from just a gimmick. Each section of the restaurant feels genuinely immersive in its own way, and the traditional music and attractive, kimono-clad waitresses do this sensation no harm whatsoever. Most importantly however, the classy interior space is backed up with serious cooking proficiency. Nazuki fuses style with substance, as adeptly as it blends old with new. 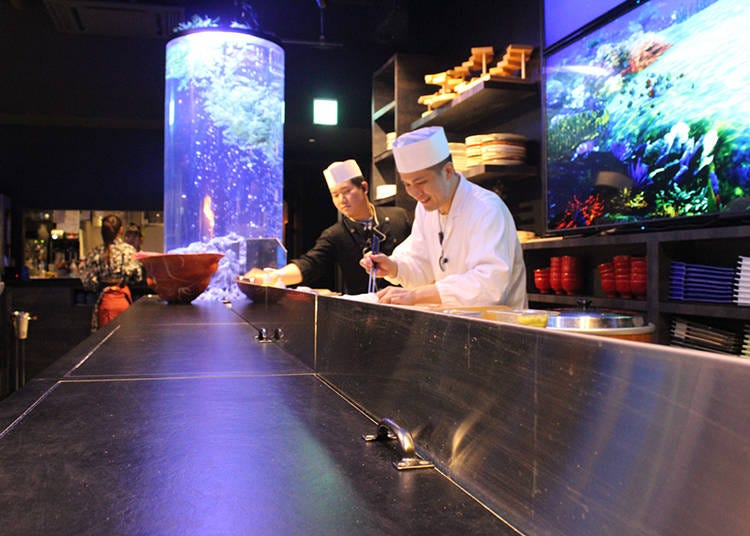 The menu is highly seasonal, focusing on the freshest and latest catch, along with whatever veg is currently on the market. The chefs slice and dice in an open kitchen, carefully placed in front of gigantic screen of meandering sea creatures, which is separated from the restaurant by a stainless-steel counter. A capacious, cylindrical fish tank bubbles to one side, while earthenware pottery and bamboo serving boxes are stacked haphazardly upon the shelves. These facets combine to create a kind of culinary theatre, which wandering customers are free to admire. 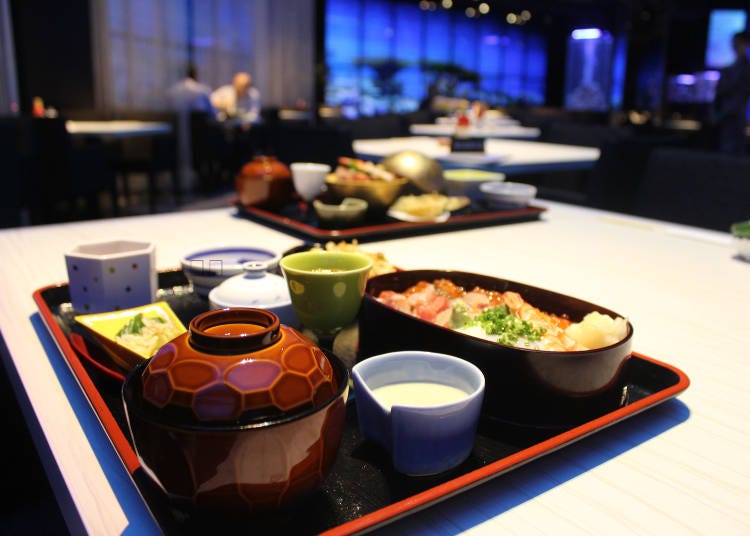 The menu at Nazuki is beefy, so to speak, without being overwhelming. English menus are also available, with the ingredients of each dish helpfully outlined. We opted for the osusume (recommendation), a Nazuki Bento, and the Bara-Sushi Set.

The Bara-Sushi Set may be a little more familiar to those uninitiated with the refined forms of Japanese cuisine. A smorgasbord of assorted raw fish (various tuna, sea urchin, shrimp, cod roe) is served on a bed of rice – a dish frequently called "sashimi don" – alongside soft-boiled egg, freshly peeled and crushed wasabi, and flakes of ginger to cleanse the palette. Seafood tempura, chawanmushi ("egg custard"), pickles and miso soup complete the set. 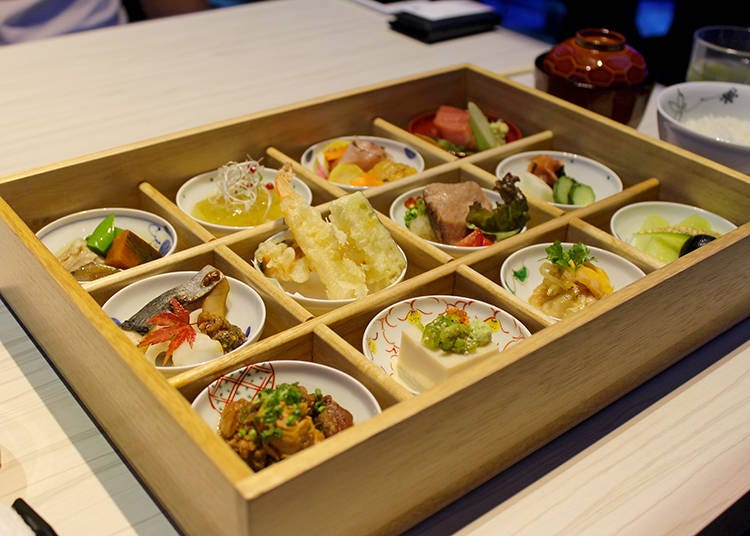 The Nazuki Bento is exquisitely presented: a bamboo box, split into 12 squares of equal size, is filled with a traditional and colored assortment of appetizers, raw fish, cooked meats, salads, pickles, rice and a desert.

Both meals tasted as exquisitely as they appeared. The fish was tender as butter, and as fresh as one would expect to find on the door step of Tsukiji market. The dishes were equally composed of creative and well-balanced flavors: the soft briny bite of cod roe coupled with sweet and creamy sea urchin ticked all the right boxes for me. Nothing felt too overpowering (which is a common slip up among meals offering so much variety). Classic Japanese cuisine is all about elegance and paying homage to the seasons; a nail that Nazuki hits square on the head. 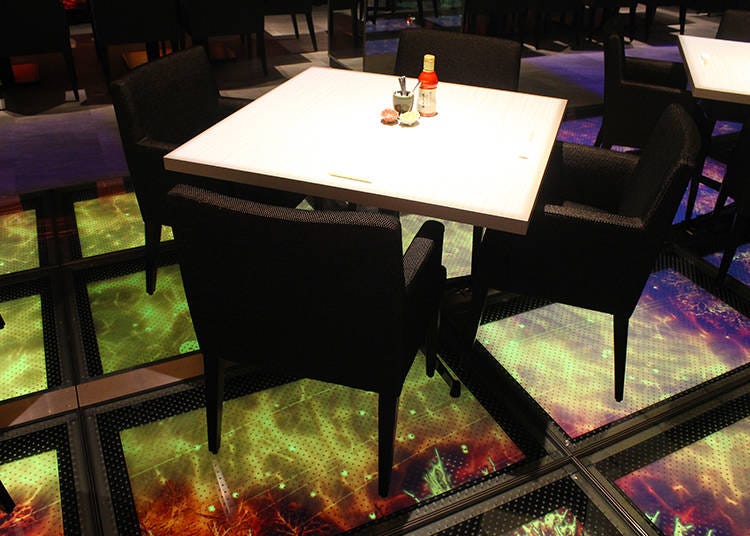 Nazuki is certainly a different dining experience, but it's been carefully curated and tastefully implemented. In a city that has no shortage of gimmicky restaurants, Nazuki has the potential to break the trend, and become one of the frontrunners in Tokyo's entertainment dining scene. All told, it's a fitting expression of the revitalization that aging Tsukiji has been looking for.