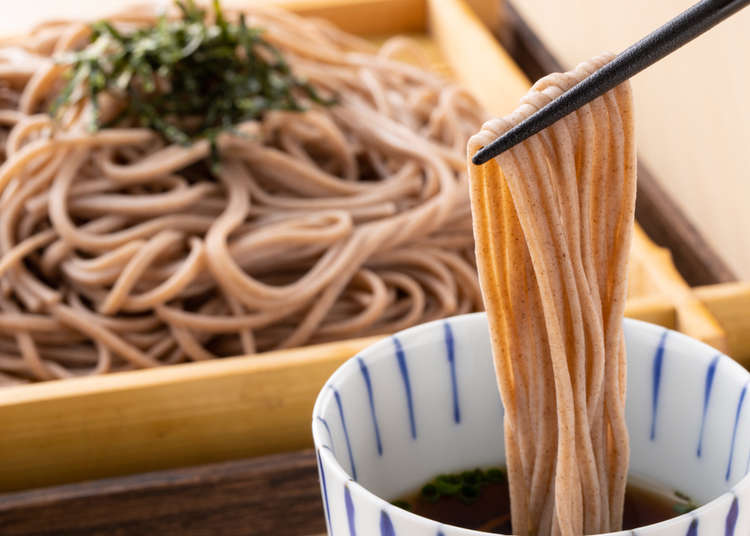 Local Cuisine Guide: The 15 Best Tokyo Dishes You Need To Try Next Visit

While Japanese food is incredible all across the country, flavors and styles can vary from region to region. In this article, we're going to look at 15 Tokyo dishes that have their roots firmly in the nation's capital. Some you might have heard of, some you might not.

To help us out, we got in touch with Dave Conklin, a food historian, writer, editor, and author of Mr. Conklin Eats His Way Around Traditional Tokyo to give us the lowdown on these 15 traditional Tokyo foods. 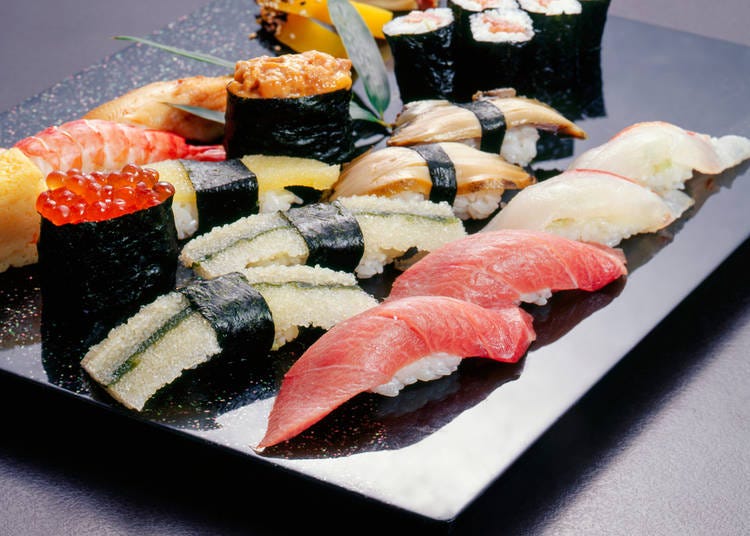 Edomae sushi refers to bitesize pieces of fish that have been slightly pickled with salt or vinegar on top of small clumps of rice soaked in (usually) red vinegar. The term edomae is a reference to Edo (Tokyo) Bay, where most of the fish traditionally came from. However, it also has the meaning of "high quality", which might explain its use in other areas of Japan somewhat far from the original Edo Bay.

This style of sushi was first made in the 1820s at a shop called Yoheizushi, located in the Ryogoku neighborhood of Tokyo. Although the original shop has long been closed, there are still a few sushi shops around that can trace their lineage back to Yoheizushi, including Kizushi in Ningyōchō and Benten Miyako Sushi in Asakusa. There are hundreds of other restaurants in Tokyo where you can also enjoy edomae sushi, one of the most famous foods of Japan. 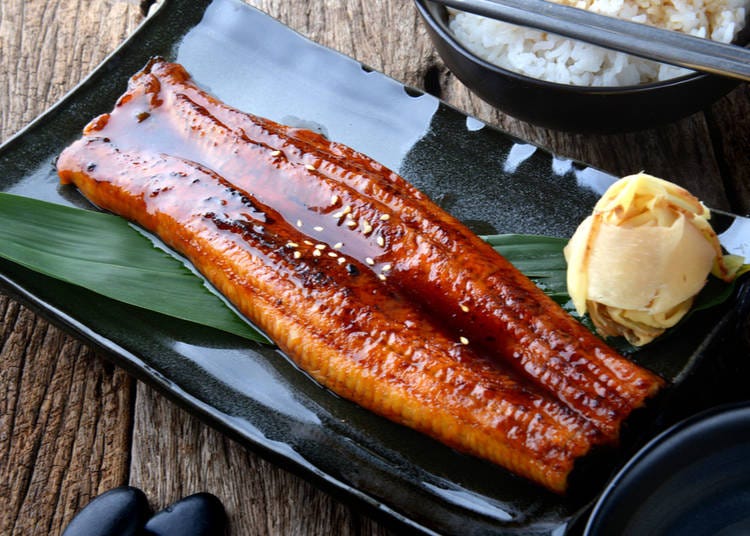 Unagi is freshwater eel which is deboned, grilled and served over rice.

In addition to edomae sushi, unagi—grilled freshwater eel—is another of the "Four Foods of Edo," Edo being the name of Tokyo until 1868. It is usually eaten at restaurants that specialize in it, and in Tokyo, it is generally prepared as kabayaki. This is where the eel is split open from the back, deboned, then skewered, steamed, and then dipped in a sweet shoyu-based sauce and grilled over charcoal, then served over a box of rice.

A different style is shirayaki, where the eel is grilled with only salt and no sauce. Unagi restaurants often have a sign or banner in front with the Japanese characters for 'unagi' written so as to resemble an eel. 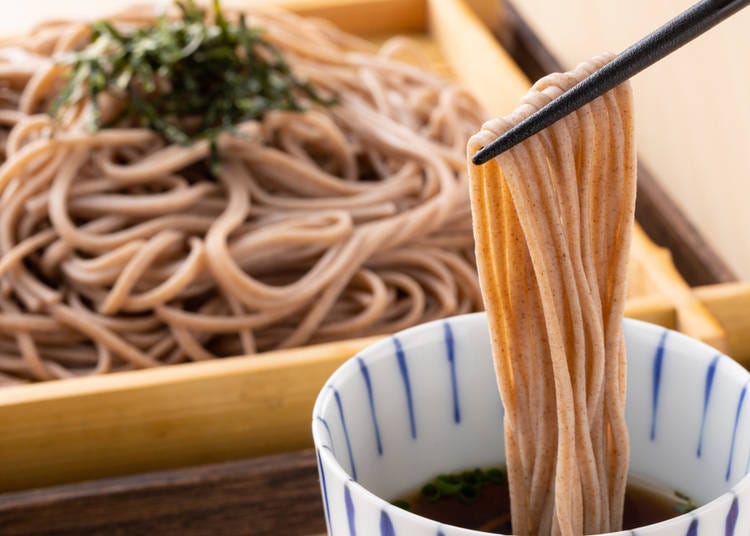 Soba is a noodle made from buckwheat flour and can be eaten hot or cold.

The third of the Four Foods of Edo is soba. These are noodles made from buckwheat and the preferred noodle of the Tokyo region. The noodles can be eaten hot, served in a bowl of soup made from dashi and a darker, saltier shoyu sauce or cold, with the noodles served with a cup of tsuyu, a stronger version of the hot soba soup.

Many other ingredients can be added to the hot soup, while cold soba is usually eaten as is or with tempura. There are thousands of soba shops in Tokyo, ranging from places where you stand and eat to shops serving handmade, artisanal noodles. Be sure to enjoy this healthier noodle dish and remember; slurping while eating is fine, and even considered as a sign you're enjoying your food! 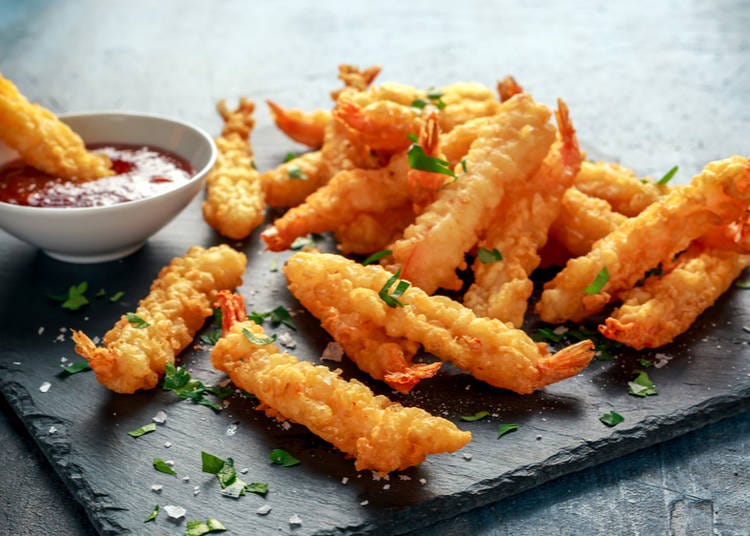 Tempura is seafood and vegetables coated in a light batter.

Tempura, pieces of fish or vegetables battered and fried in hot oil, is the last of the Four Foods of Edo. As with the other three, this was originally a "fast food." The name likely originated when Portuguese missionaries in the 16th century saw deep-fried foods being eaten in Buddhist temples. Its popularity spread in the Edo period after cooking oil became more plentiful as the country entered a period of peace and stonemasons who previously carved stones for castles turned their energies to carving stones for milling. Tempura is usually eaten dipped in a light sauce or salt. 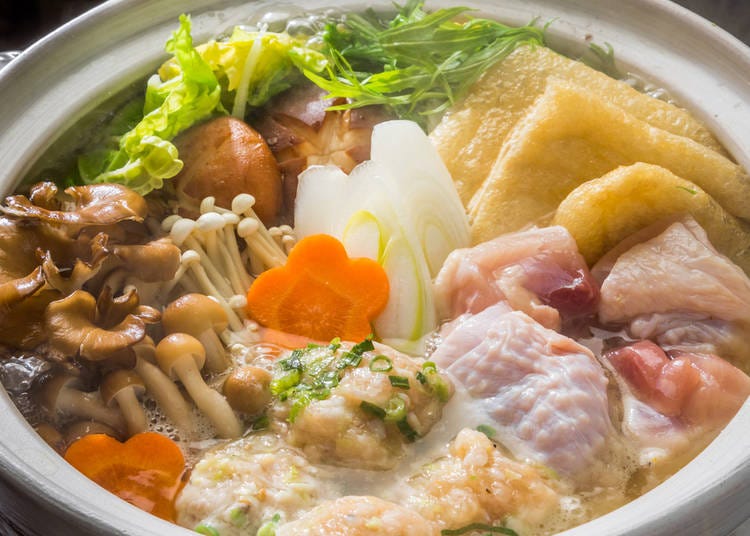 Chanko nabe is a protein-rich stew consumed by sumo wrestlers.

Chanko nabe (pronounced 'na-bay') is a hotpot stew eaten by sumo wrestlers. It usually consists of a base soup flavored with either salt, miso or shōyu (Japanese soy sauce), a meat (usually pork or chicken, sometimes fish), and lots of vegetables and tōfu. It is accompanied by various side dishes as well as lots of rice, all of it washed down with bottles of beer. It was first made in the 1910s by a very successful sumo coach who had some 200 sumo wrestlers in his charge. Chanko nabe apparently solved the problem of how to feed so many hungry mouths.

What do many sumo wrestlers do after retiring? Open restaurants serving the food they know best: Chanko nabe. Many chanko restaurants can be found in the Ryogoku neighborhood, the center of sumo culture. One, Kawasaki Chanko, was the first such restaurant and is still in business just a short walk from the sumo arena. 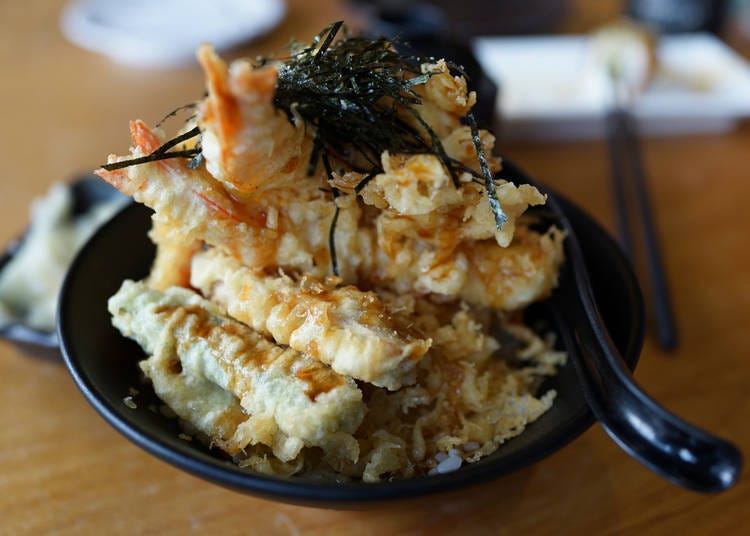 Tendon is crunchy and salty seafood tempura served on rice.

You may have heard of donburi, which is a bowl of rice with some form of cooked topping. Tendon is usually a seafood tempura donburi. The tempura most often consists of large shrimp and assorted vegetables served on top of a bowl of rice, then smothered in a sweet and thick soy-based sauce. It was first made some 200 years ago in the Shinbashi neighborhood of Tokyo. Restaurants serving tendon can be found throughout Japan, with a serving generally costing less than 1,200 yen, or about US$10. 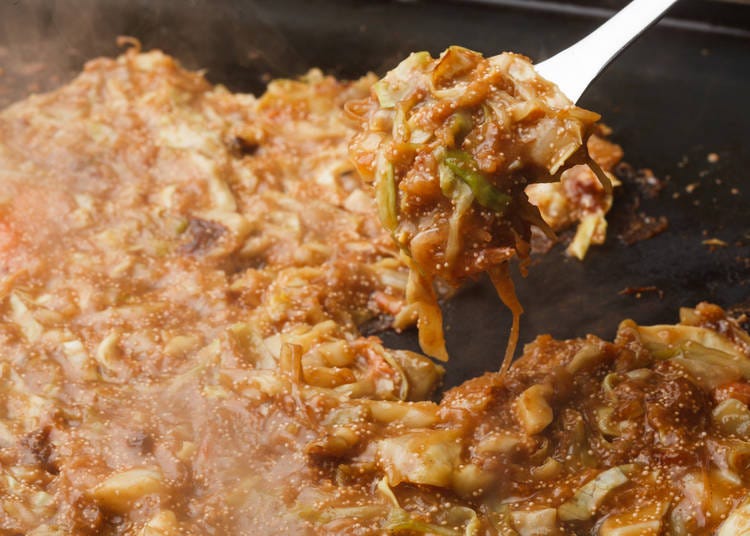 Monjayaki is pan-fried batter with a mix of meat and vegetable fillings.

If you enjoy playing with your food, then monjayaki, or just monja, is for you. Monjayaki is a mix of your choice of meat or fish and vegetables in a watery flour and egg batter that you cook in front of you on a griddle table. You eat it with the small spatulas you use to cook with, topped with different sauces and flavorings. Although monja restaurants are common throughout Tokyo, the best place to go for it is Monja Dori in Tsukishima, an area in which there are about 100 restaurants specializing in this historical dish. 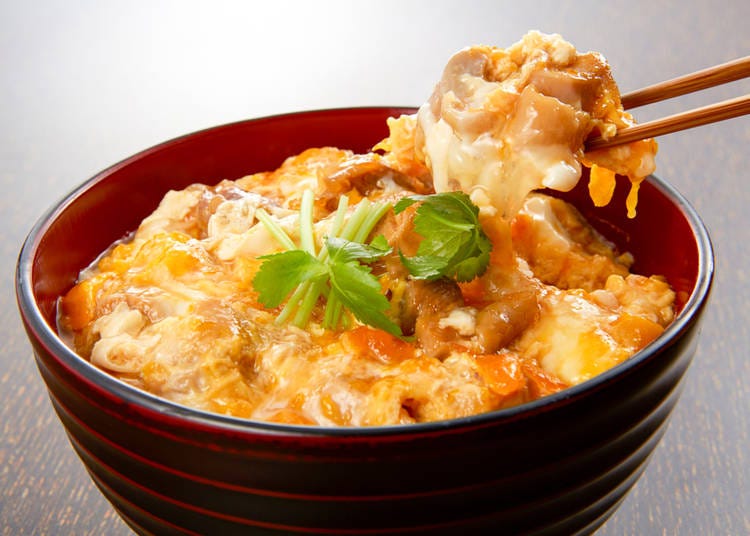 Oyakodon is chicken and eggs simmered in sauce and served over rice.

Oyakodon is a dish of chicken meat cooked in a sweet miso sauce over a bowl of rice and topped by a raw egg that semi-cooks on the hot chicken sauce. The name means "parent and child" over rice (don, short for donburi), a reference to the chicken and egg. This dish was first made in the 1880s at Tamahide, a restaurant in Tokyo's Nihonbashi Ningyocho neighborhood that opened in 1760. Tamahide also serves a version made with shamo (fighting game cocks). 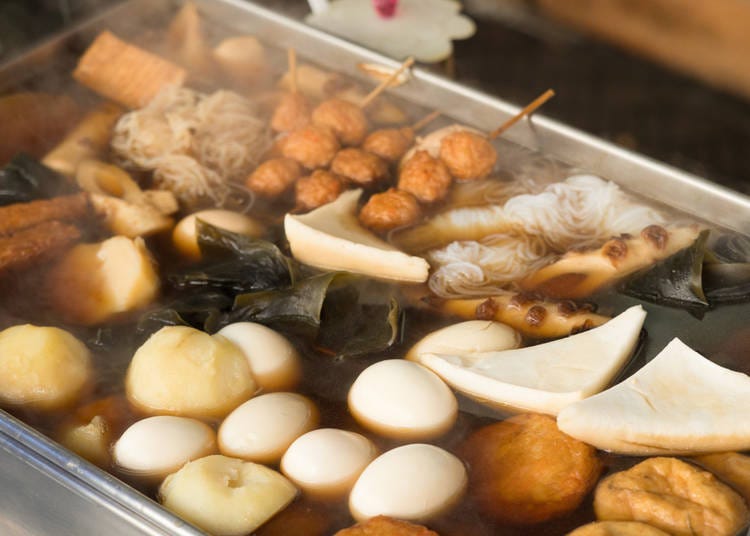 Oden is a stew made with eggs, fish cakes, daikon and dashi soup.

Oden is a hearty stew of processed fish products, vegetables such as daikon, onions and carrots, tōfu products (there are many!), konbu kelp, konnyaku, boiled eggs, and more, all simmered in dashi stock and served with a dollop of hot mustard. It is especially popular in the winter when it can be found at oden restaurants, izakaya, street carts, and in most convenience stores. It is a warming dish that goes especially well with a cup of warm sake. It is usually priced by the piece, vegetables being cheaper than fish. 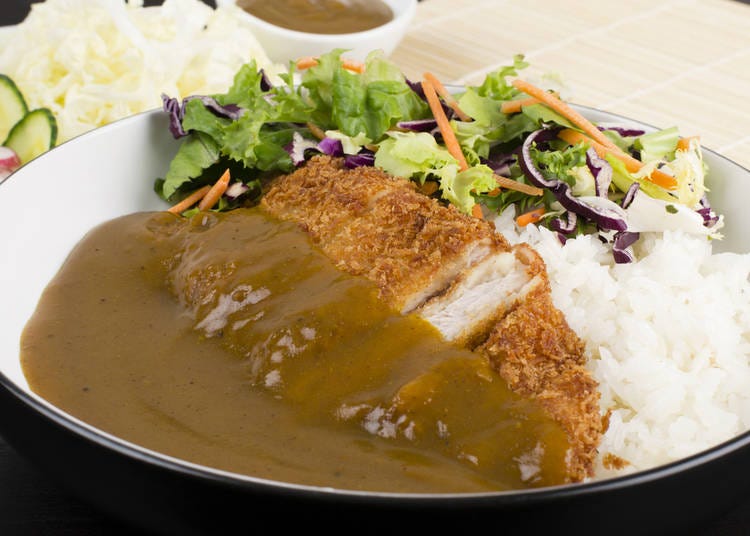 Yōshoku is a general term for dishes inspired by western cuisine. Pictured here is katsu curry.

Yōshoku means "western cuisine," and consists of simple western dishes prepared Japanese style using ingredients and equipment that were available in the 1880s in Japan when this cuisine first came out. The most famous yōshoku foods are ka-re raisu (curry rice), Hamburg steak (minced beef covered with a sauce), many fried foods, including shrimp, various small fish, oysters, croquettes, etc., always served with a pile of shredded cabbage, and even potato salad.

There is also tonkatsu (とんかつor 豚かつdeep fried pork cutlets) and gyukatsu (牛かつ deep-fried beef). The fried foods are first coated in flour, then dredged in beaten eggs, and finally coated in panko (bread crumbs) before being deep-fried. Most people pour a thick, dark sweet katsu sauce on their fried items. Sometimes, “katsu” abroad is thought of as the curry. However, “katsu” refers to the meat cutlet itself, so if there is no meat cutlet, it’s not a katsu curry, it’s just curry rice! 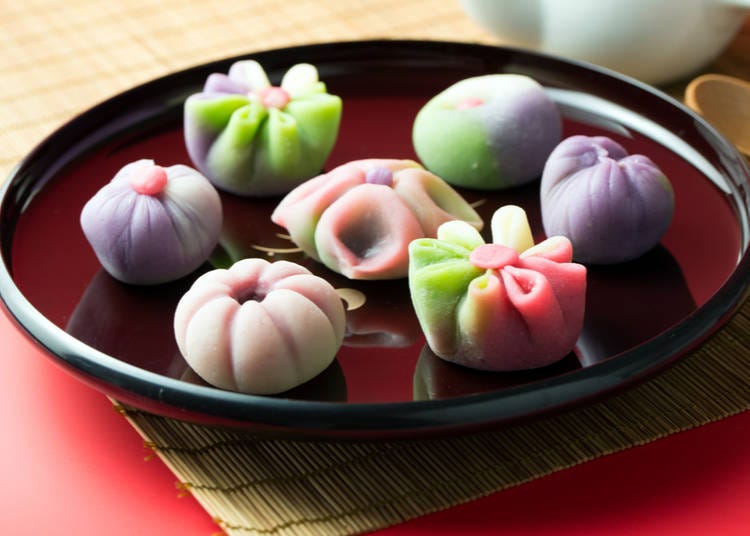 Wagashi are confectionary made from bean paste and served with green tea.

The term wagashi (wa = Japan, kashi = confection) covers a lot of things, but essentially means Japanese sweets and confections made mainly from rice flour and sweet beans. The most beautiful and elegant are intended to be eaten during the tea ceremony, and the mild sweetness is meant to contrast with the strong and bitter flavor of the matcha tea. Very often, the design of the sweet is reflective of the season. Many small shops specialize in wagashi throughout Japan; department store food floors known as depachika also offer extensive selections. 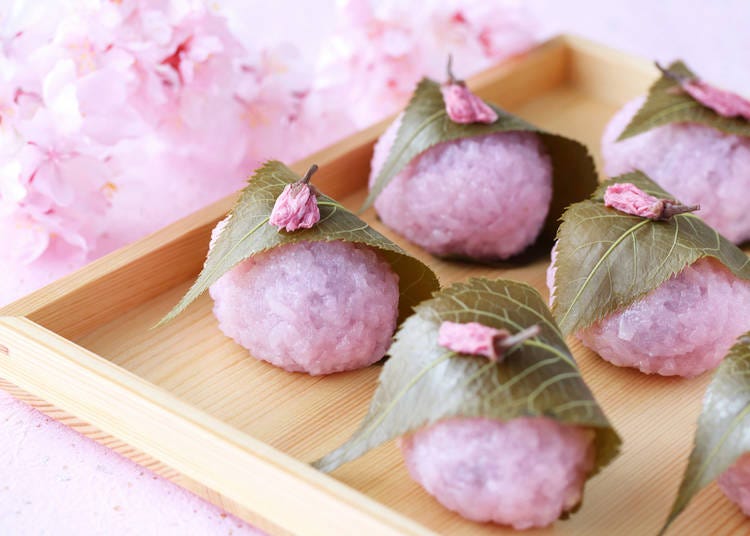 Sakura mocha is a type of confectionary made of sweet rice.

Sakura mochi is a type of wagashi that consists of mochi (steamed and pounded glutenous rice) with sweet bean paste (an) inside wrapped in a salt-pickled cherry leaf. It was first made nearly 300 years ago when a priest raking fallen cherry leaves from the temple grounds came up with the idea to preserve the leaves to eat later. This traditional sweet can be found throughout Japan all year round, but is especially popular in the spring when the sakura (cherry) blossoms are blooming. 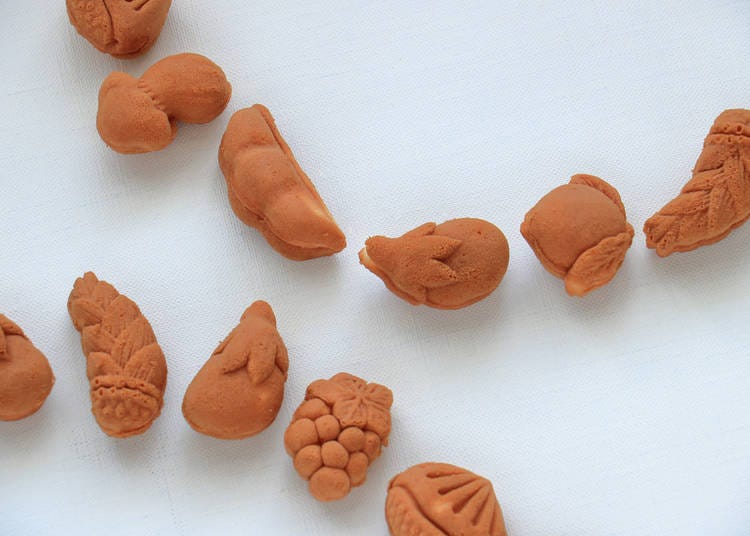 Ningyoyaki is a small spongecake filled with anko bean paste.

Ningyoyaki are small, bite-sized cakes filled with sweet bean paste baked in cast metal molds in the form of the Seven Gods of Good Fortune and other shapes. This delectable sweet was first made in 1907 by Itakuraya, a small shop in Ningyōchō, a neighbor that was at the time famous for its bunraku puppet theaters (“ningyo” means doll, “yaki” cooked). Ningyoyaki can be found throughout Tokyo in many different shapes, including at festivals and still, at Itakuraya. They are best when eaten fresh off the fire and warm. 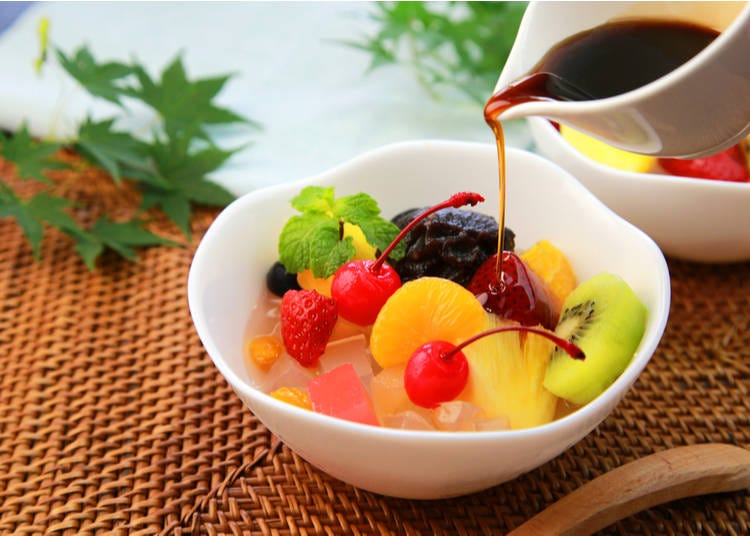 Anmitsu is a dessert with fruit, gelatin and red bean paste.

Anmitsu is a simple and refreshing dessert that combines jelly, fruit, and sugary syrup. It dates back almost 200 years ago to a shop in what is now the Ginza area of Tokyo. Anmitsu is always served in a bowl, with pieces of cubed agar jelly on the bottom, topped with sweet bean paste and a mix of different fruits such as kiwi, watermelon, and berries. A sweet black syrup called mitsu is served on the side. Cool and refreshing, anmistsu, the perfect treat for the hot and humid summer season, can be found in many restaurants and specialty shops throughout Tokyo, especially in the summer. 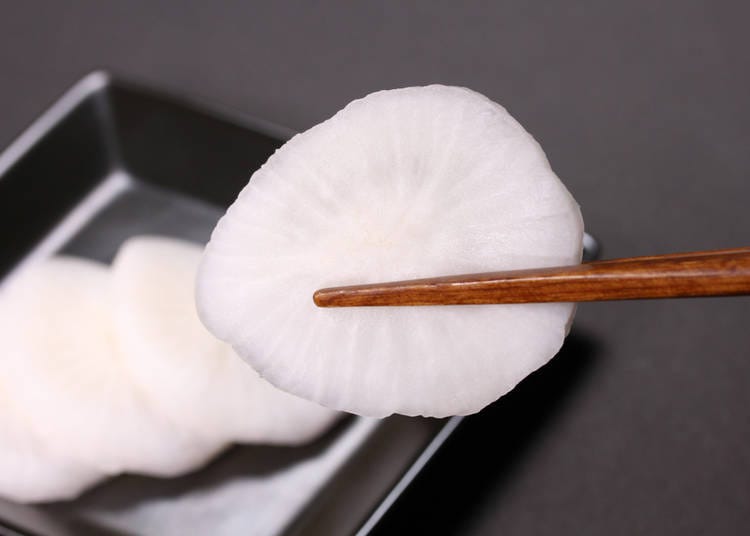 Bettara is a type of Japanese pickle that was first made in Japan and has become synonymous with the Nihonbashi area of Tokyo. Bettara is made by soaking daikon radish in a mix of sugar, kōji, vinegar and water (recipes vary), the result being a sweet and crunchy treat. It comes in at least two main forms, the first being the picked form and the second being mixed with mochi and then grilled on a skewer. If you happen to be in Tokyo in the fall, a two-day bettara market festival is held every October 19 and 20 in Nihonbashi, an event that has been taking place since 1606.