HOME Tokyo and Surroundings Tokyo Tokyo Station 'What's Shoyu and Mirin?!' Become a Pro in the Kitchen With These Japanese Words & Ingredients! 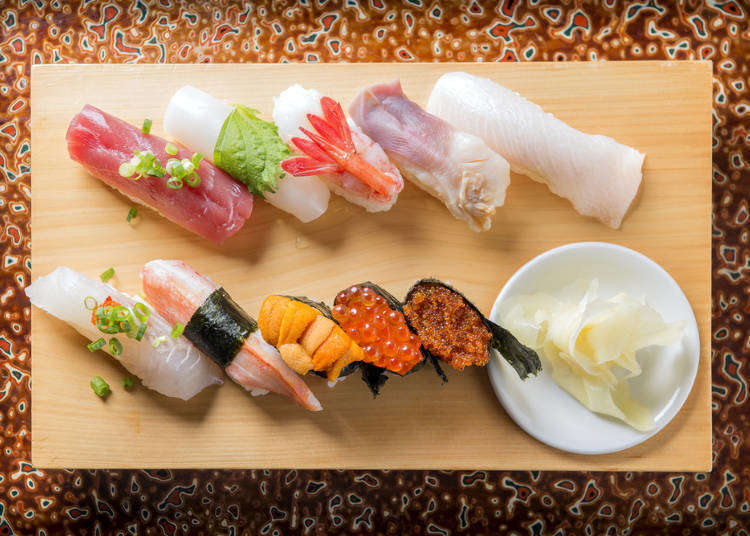 'What's Shoyu and Mirin?!' Become a Pro in the Kitchen With These Japanese Words & Ingredients!

Washoku [Japanese food] is registered as a UNESCO intangible cultural property, and is a Japanese cuisine that attracts attention from around the world. Whether you're on a trip, or at a place meeting with colleagues or friends, there are plenty of opportunities for eating.

For that reason we have selected some basic Japanese vocabulary that is commonly used for Japanese cuisine and at eating establishments. We will introduce useful words that you should know, such as for seasonal foods, cooking methods, and sushi shop terminology.

■ “Event dishes” that are eaten during seasonal events in Japan

In Japan, there are various seasonal events throughout the year, such as Oshogatsu [New Year's Day], Setsubun [day before the beginning of spring] and Hinamatsuri [Doll’s Day], and there is a custom of eating special dishes for each event.

Especially dishes for Oshogatsu and Setsubun, which are very much a part of Japanese daily life, can also be found in convenience stores and supermarkets. By learning these words you will be able to get a deeper sense of Japanese culture. 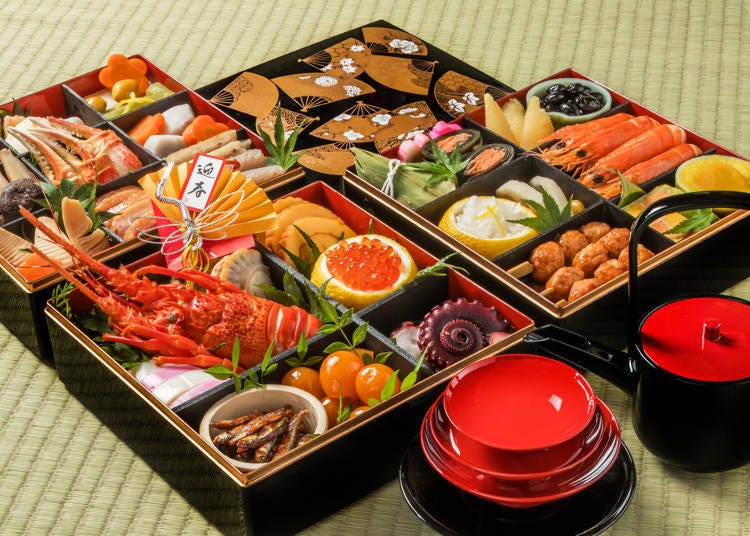 Osechi is a celebratory cuisine (iwaizen) eaten during the first three days of the New Year. The dishes are traditionally served in jubako [tiered lacquer ware boxes]. Although the content and seasoning of the dishes differ depending on the region and the home, they tend to be used for their auspicious colors, such as red and white kamaboko (boiled fish paste) and golden kurikinton (sweet chestnut paste). 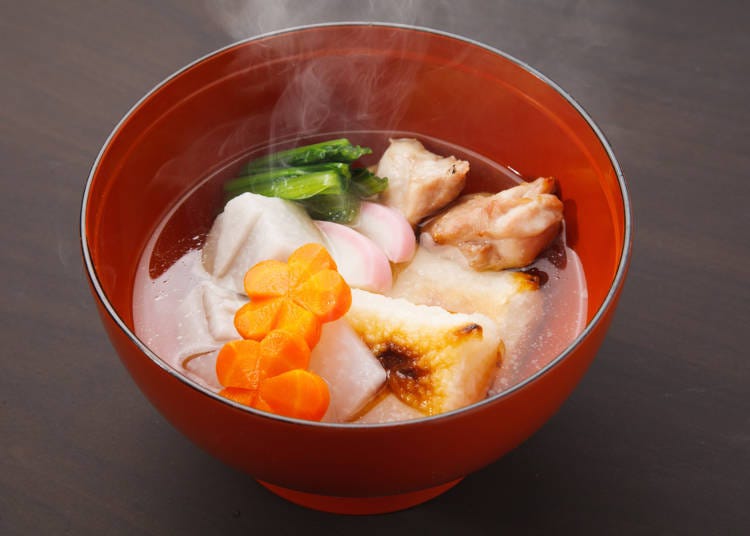 Ozoni is dish consisting of rice cakes served in a miso soup. Recipes for it vary from region to region and household to household.

Otoso is a sake drink that is believed to ward off bad energies throughout the year and is also considered an auspicious drink by those wishing for a long life. 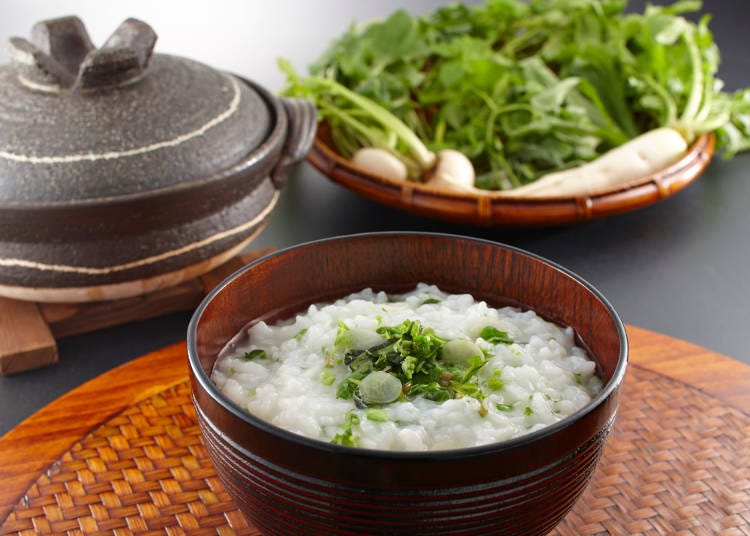 Nanakusagayu is eaten on the People’s Day Festival held on January 7th together with wishes for good health. These celebratory dishes and drinks are also said to be good for digestion. 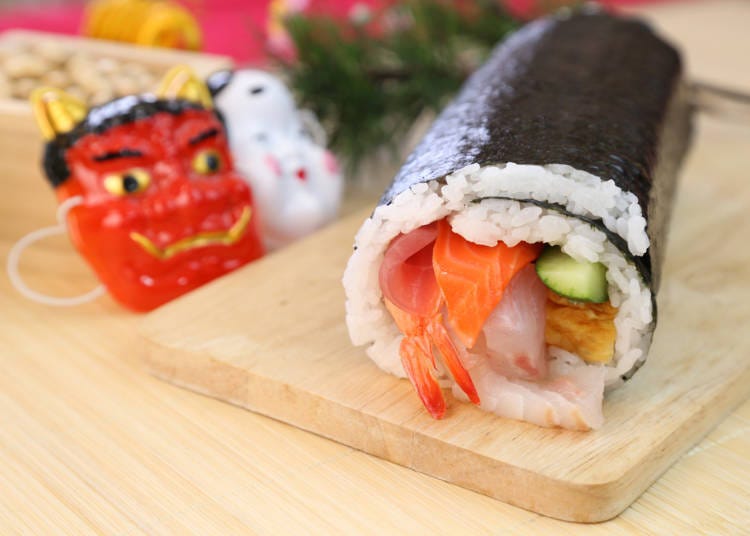 When Setsubun occurs on February 3rd, ehomaki is often found in convenience stores and supermarkets. Various types of ingredients are rolled up in rice and wrapped with seaweed to make ehomaki.

The origins of this popular custom are not clear, however, these days the custom is to eat the ehomaki on the night of Setsubun while facing the direction of eho - a lucky direction according to the Japanese zodiac. If the person eats the entire roll without out uttering a word while thinking of his wish, then that wish will be granted.

Also, during Setsubun, there are the customs of throwing roasted soybeans, called "lucky beans", while saying aloud, "Oni wa soto, fuku wa uchi" [Out with the devil and in with good fortune], and eating one bean for each year of one's age to ward off bad luck. Speaking of Setsubun, the throwing of beans is popular, however, in recent times you are probably more likely to have a chance to see ehomaki.

■ Vocabulary for the basic seasons used in Japanese food

If you know something about Japanese cooking, especially the many seasonings often used in Japanese dishes, you can easily use them in ways to suit your own taste.

Here are some words used to describe basic seasonings used in Japanese dishes. 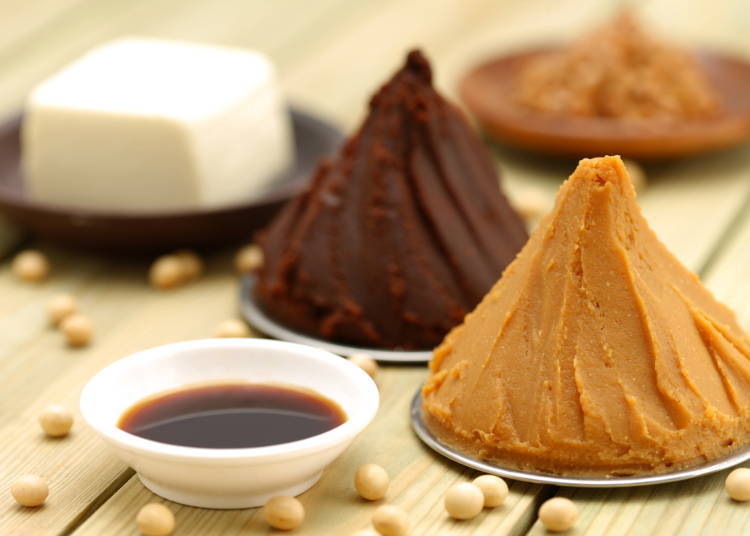 ・Shoyu [Soy Sauce]
Shoyu is the most representative seasoning used in Japanese cuisine. There are two types: one made from fermented soybeans, wheat and salt mixed with fermented soybeans, and the other made from amino acid mixed with salt. It has a salty taste and may be used as it is in dishes like sashimi or tofu, or it may be used to season boiled or soup dishes.

・Miso [fermented soybean paste]
Miso, which is famous as a seasoning used in miso soup, is steamed soybeans that have been fermented by adding salt and koji [malted rice]. That made only with soybeans is mame miso [bean miso], that made by mixing and fermenting soybeans and rice is kome miso [rice miso], that made by fermenting soybeans and barley or buckwheat is mugi miso [barley miso], and all of them mixed together is called chogo miso [blended miso]. There are dark aka miso [red miso] and light shiro miso [white miso], but this is due to the difference in the length of the fermentation period and the composition of the basic ingredients. The type of miso used varies according to region and the dish being prepared.

・Mirin [sweet sake]
Mirin is sake that is brewed by adding glutinous rice and koji to shochu [distilled liquor], and is characterized by a strong sweetness. It is used for simmered dishes, soup for noodles, and teriyaki glazing. It is mainly used as a seasoning, but it may also be consumed as otosu which was mentioned earlier. 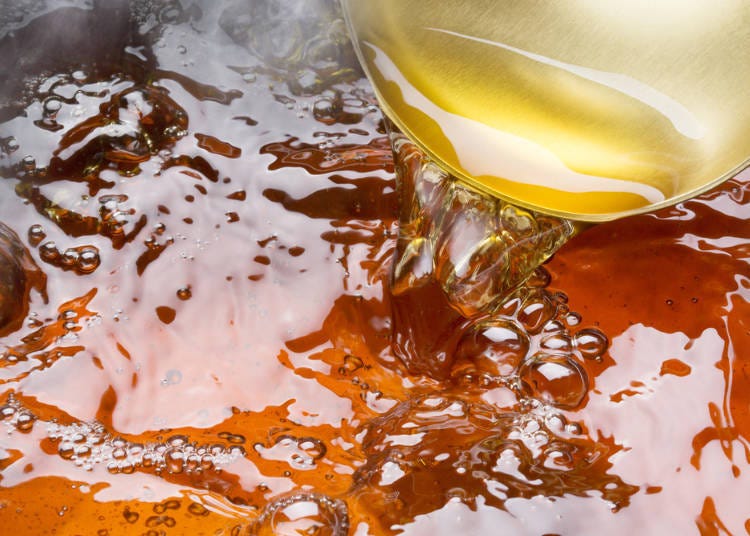 Dashi is an abbreviation of nidashi-jiru [boiled soup] and is a soup made from such things as katsuobushi [dried bonito shavings] and konbu [kelp]. It has the effect of increasing the umami [good flavor] of the cuisine, and it is an important condiment that can be regarded as the deciding factor in the taste of Japanese-style dishes and ramen.

Liquid types and granular types, convenient for home cooking, are sold because making it is a time-consuming process.

When talking about Japanese food, tsuyu refers to soup-like foods such as sumashijiru [clear soup] and those prepared by adding soy sauce to the soup stock. The word tsuyu is sometimes used as a term that refers to all soup types such as those used in udon, soba, and ramen.

There are many ways to prepare Japanese cuisine. Depending on the method in which fire is used, the type of dishes created will vary greatly. Here are some words that often appear in restaurants that refer to how food is prepared.

Remembering these words will make ordering easier because you will be able to imagine what sort of dish will be prepared. 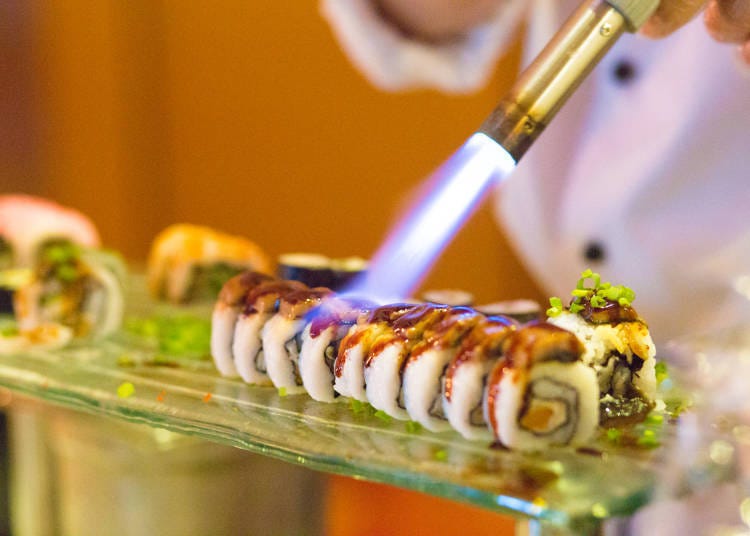 Using fire to heat food or to grill it is called aburu in Japanese. Often you will hear the word aburi in eating establishments and this refers to applying fire to the food to dry it to some degree.

By searing the exterior of food the flavor is enhanced as the interior retains and increases its original flavor while giving it texture.

・Nama (raw; fresh)
Nama refers to any food that is served in its uncooked natural state. The same applies when used referring to food. The food is served uncooked as it is, so the freshness of it determines how delicious it will be. In restaurants you will often see nama biiru [draft beer] advertised and in Japan it refers to beer that has not been heat treated.

・Yaki [grilled]
Many types of Japanese dishes are prepared yaki style such as yakisakana [grilled fish] and yakitori [chicken grilled on skewers].

This word comes from the verb yaku which means to grill, broil, or cook. In most cases food is cooked in pots, fry pans, or in ovens. You may also see jikabiyaki which refers to food cooked over an open flame.

・Niru [simmer]
Yaki refer to food that has been grilled or cooked with fire, whereas with niru the food is cooked in water or other liquid that has been seasoned.

There are many nimono [stewed dishes] in Japanese cooking, such as nizakana [stewed fish] and nikujaga [meat and potatoes stew]. When simmering, many of the previous mentioned seasonings are added for flavor, so if you want to eat typical Japanese food, you can't go wrong with nimono.

When you hear mention of Japanese food, probably sushi comes first to mind. In recent years sushi shops have sprung up all over the world.

The following are words only used in sushi shops. Knowing these words will make you a sushi aficionado! Here are some of the basic ones. 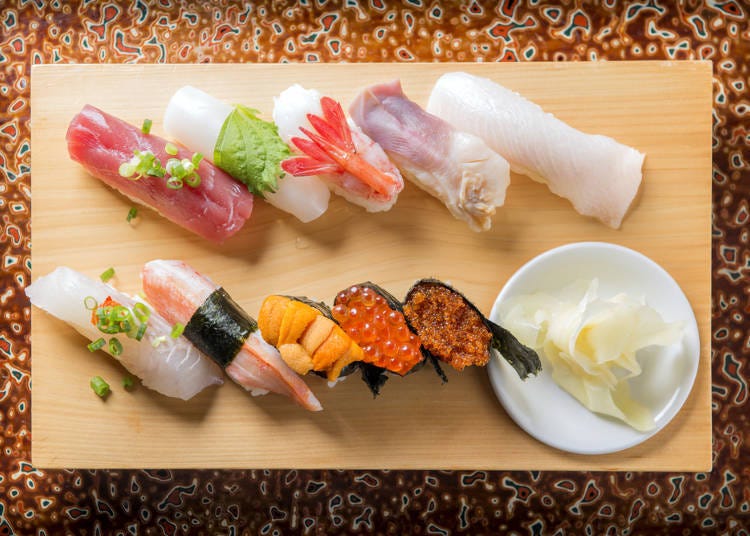 Shari is the bed of vinegared rice on which the slices of raw fish are placed. Shiro shari [white shari] is rice that has been seasoned with white vinegar and is the type used in most sushi shops. Edomae [Edo-style] sushi, on the other hand, has a long tradition of using aka shari [red shari]. Aka shari is shari that has made with red vinegar that has been brewed from sakekasu [sake lees].

・Neta, tane [sushi topping]
Neta and tane are words that refer to the seafood ingredient that goes on top of the shari. There are many kinds of tane. The following are two special types of neta. Toro refers to fatty tuna and zuke refers to tuna that has been marinated in soy sauce.

・Gari
Gari is sliced ginger prepared in vinegar. The word comes from the sound made when eating it: garigari [crunchy]. Gari serves two roles: one is to refresh the palate and the other is to fight germs. 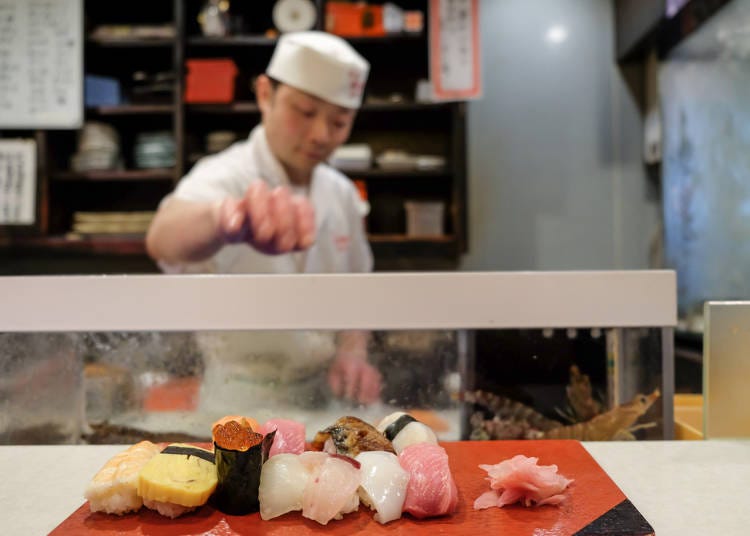 ・Namida [wasabi]
In a sushi shop wasabi [Japanese horseradish] is called namida. It is called this because too much wasabi can make your eyes water and namida normally means “teardrop”.

・Murasaki [purple]
In a sushi shop murasaki means “soy sauce”. It is called this because the soy sauce resembles a dark purple color.

・Agari [tea]
Tea that is served in a sushi shop is called agari. This word was originally used by geisha and referred to “the last thing served”. Many sushi shops offer powdered tea and bancha [coarse tea].