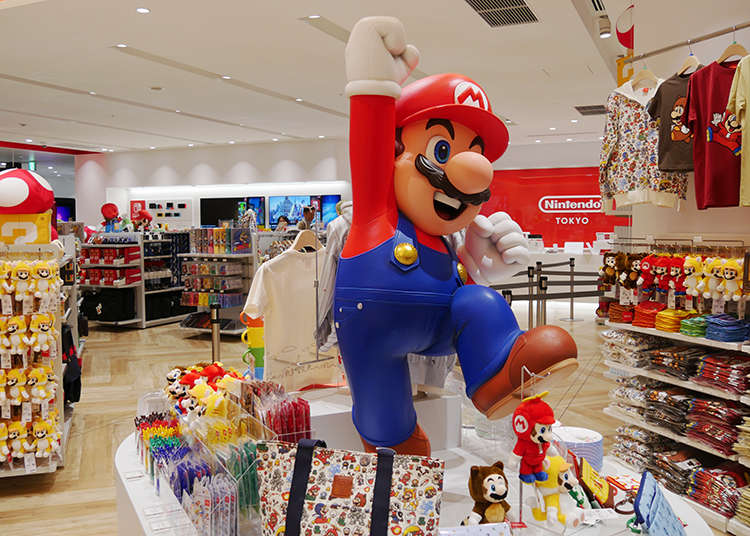 Nintendo Tokyo: Inside the First Official Nintendo Store in Japan (With Video)

Nintendo Tokyo - Nintendo’s first shop in Japan, and second in the world (after Nintendo NYC) - opened on November 22, 2019 inside the department store Shibuya PARCO.

Inside the Nintendo Store in Tokyo! 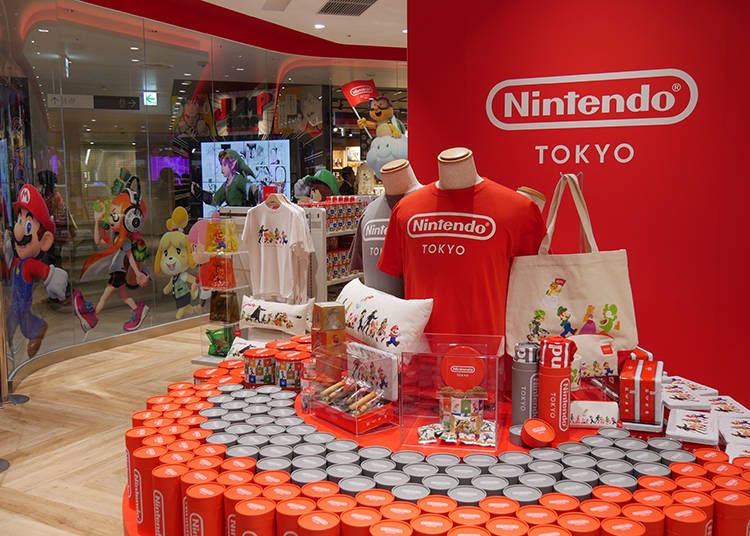 With two entrances on opposite sides and a wide open space in the center, Nintendo Tokyo is designed to prepare for the oncoming traffic of Nintendo fans pouring in and out.

Or for those who simply wish to stand and take in all the colorful décor and merchandise before settling on an aisle, without getting in anyone’s way.

But where to start?

The 4 Pillars of Nintendo Tokyo 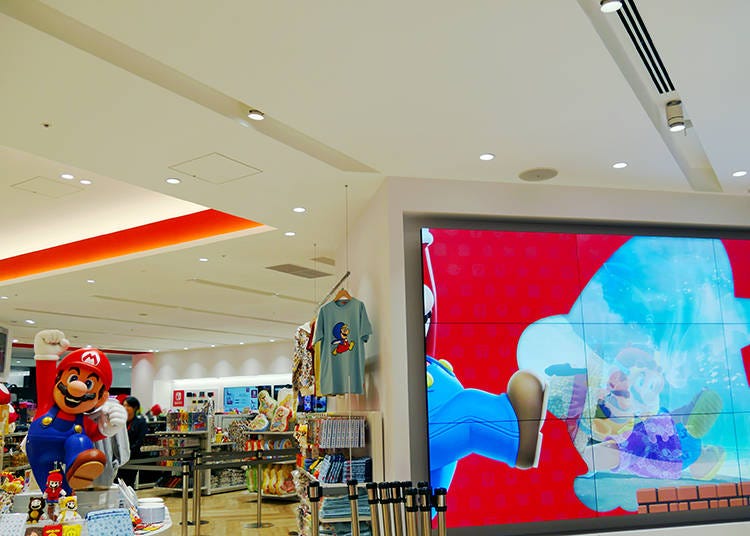 There's a variety of cool t-shirts and other Nintendo souvenirs right at Nintendo Tokyo!

Luckily, there are four statues of iconic Nintendo characters, each representing the “genre” in their corner of the store. Nintendo Tokyo is well organized, allowing customers to head directly to the products featuring their favorite characters. 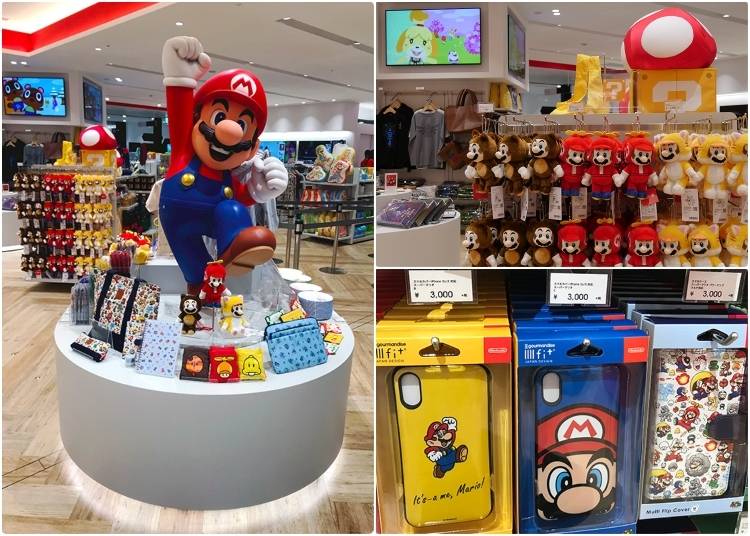 In one corner is a large Mario, dressed in his recognizable red shirt and blue overalls, thrusting his fist through the air in excitement, surrounded by a sample of items that can be found in his corner.

These include plush toys of different Mario costumes from Raccoon Tanooki to Kitsune Fox (priced at 1,500 yen) colorful bags and wallets decorated with the Super Mario characters, Mario smartphone cases (3,000 yen), stationery, and two whole aisles filled with plush toys of every Mario character under the sun, from multi-colors of Yoshi, to Luigi, Princess Peach, and many others. 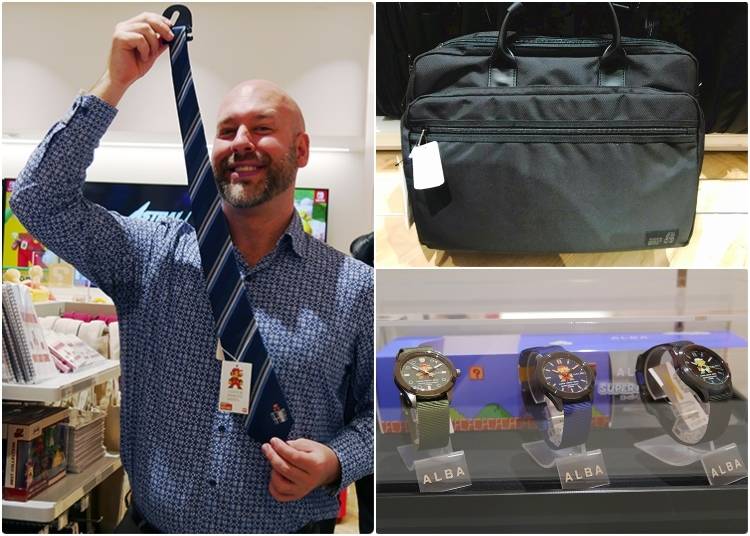 Nintendo Tokyo even has cool merchandise for adults!

It’s not all just for kids. There are also black briefcases with a Mario engraving for 7,900 yen, some fashionable Mario neckties to wear at the office, and even some classy looking Alba watches with a retro 8-bit Mario on its face. 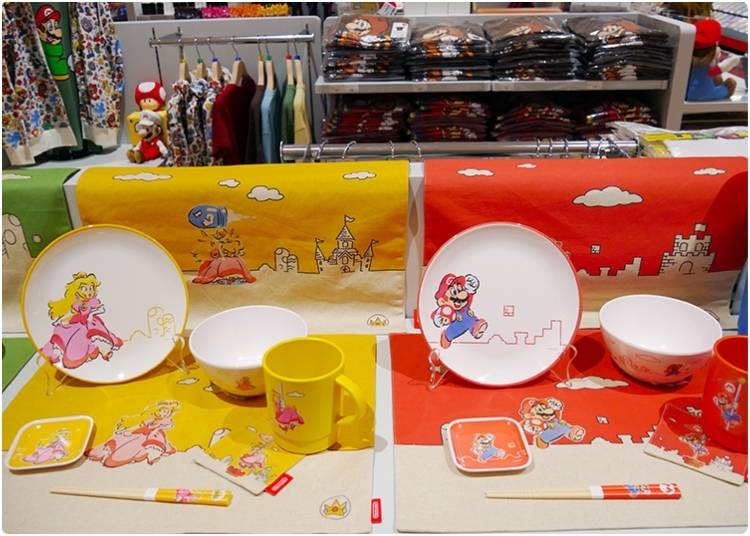 You can even find themed plates and chopsticks - perfect Nintendo souvenirs from Tokyo!

Parents eager to introduce their toddlers into Nintendo might be interested in picking up a dish set. Each sold separately, these include plates, cups, bowls, chopsticks, and even a placemat.

Have four children at home? Don’t worry, they have a set for each of the four main characters: Mario, Luigi, Toad, and Princess Peach. 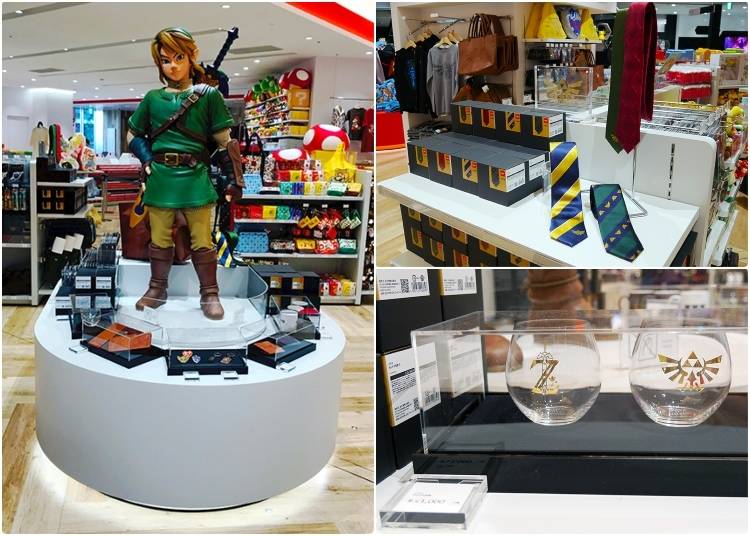 Link, Link neckties and a set of Legend of Zelda glasses

In the next corner is a statue of Link, standing vigilant while carrying a sword and shield on his back. Much of his Nintendo merchandise are the same items you would find in the Mario section, only more limited.

These include more elegant neckties, and even a set of glasses (only 1,000 yen) to plush toys of Link and Zelda for the kiddies – and collectors. 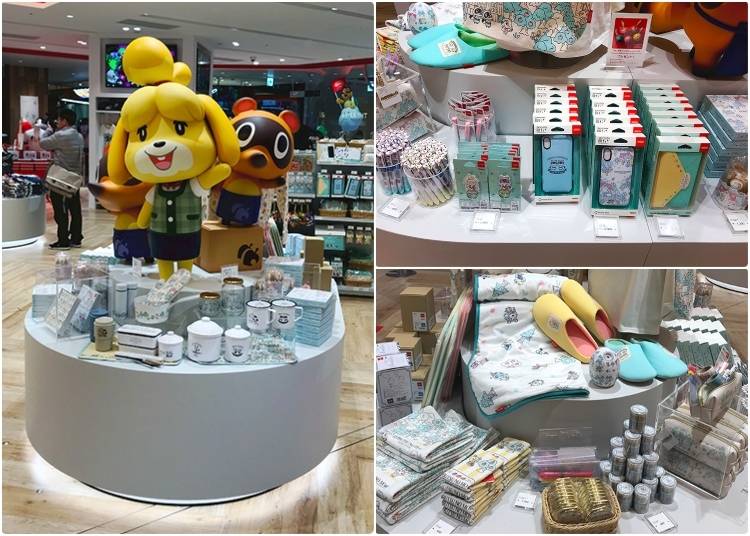 The Animal Crossing corner has everything a fan would want!

On the opposite side is a giant figure of Isabelle, the yellow dog from Animal Crossing, dressed in her secretary’s uniform and waving at the customers, while the Nooklings Timmy and Tommy timidly peeking from behind.

Since Animal Crossing isn’t retro, nor aimed at adults, you won’t find any neckties or whisky glasses here. Instead, there are ceramic cups and tea-bag containers, pastel-colored slippers, T-shirts and pajamas featuring Animal Crossing characters, bags of different sizes, and of course more plush toys. 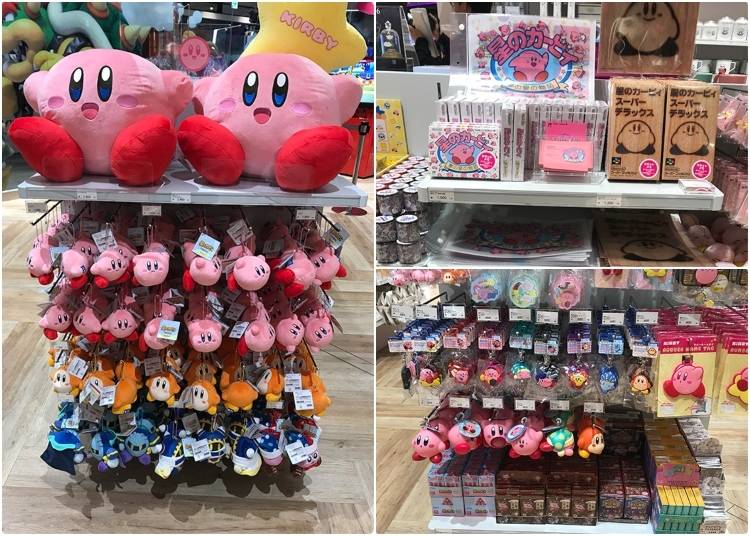 Kirby plushies? Yes, Nintendo Tokyo has them too!

The Animal Crossing corner spills into a small Kirby exhibit, where you can buy a giant pillow-like plush toy of the famous pink character (7,800 yen) or smaller versions for only 1,000 yen. 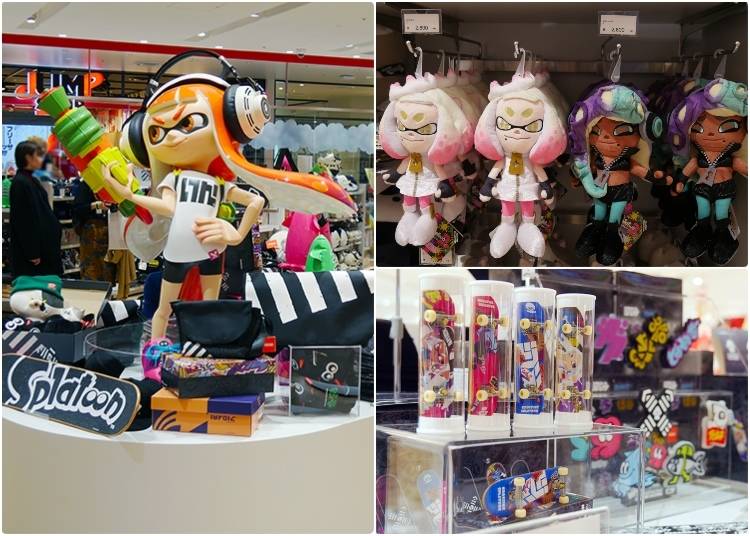 The last corner features a statue of the orange-haired Inkling Girl from Splatoon, holding her ink weapon and flashing a sassy smile at the customers.

Targeting teens, the Splatoon corner has T-shirts that range in size from Small to XL, hoodies, jackets, and even sneakers that match the character’s shoes.

Don’t worry, there’s still plush toys, as well. Also miniature skateboards, or “finger boards,” in different collectible designs for 1,200 yen. Nintendo apparently expects these to be a hot item, as a sign warns customers that these finger boards are only one per customer. 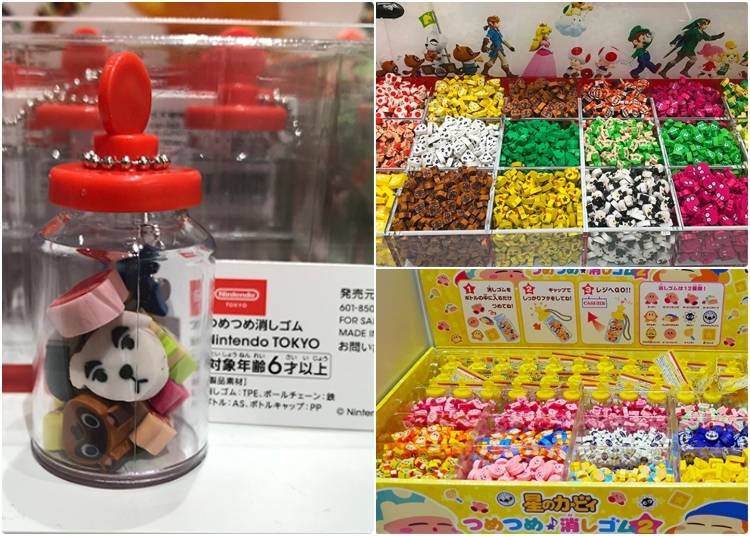 At the back of the store (or front, depending on where you enter from) Nintendo Tokyo has a make-your-own set of erasers.

Resembling a colorful buffet, children pick out their favorite Nintendo characters in the form of tiny erasers, and collect them into a jar. Each jar costs 400 yen, and holds about eight or nine erasers. 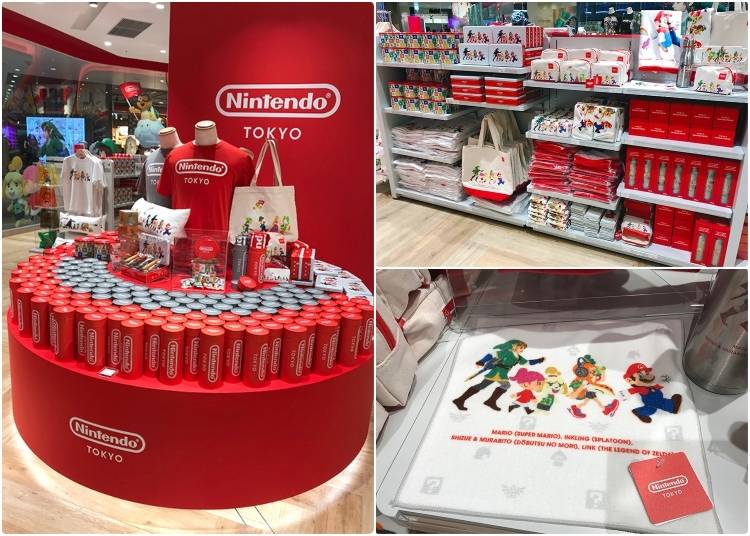 Finally, for those who are already the proud owner of Mario plush toys and Link whisky glasses, and are looking for something a little more exclusive, Nintendo Tokyo has you covered.

A small area near the entrance (or exit) has Nintendo Tokyo T-shirts (for 4,800 yen) pillows for the airplane, tote bags, pouches, and a tin of Japanese sweets.

These items, due to their slightly higher prices, seem to be catered towards tourists wishing to bring something back home as a souvenir. 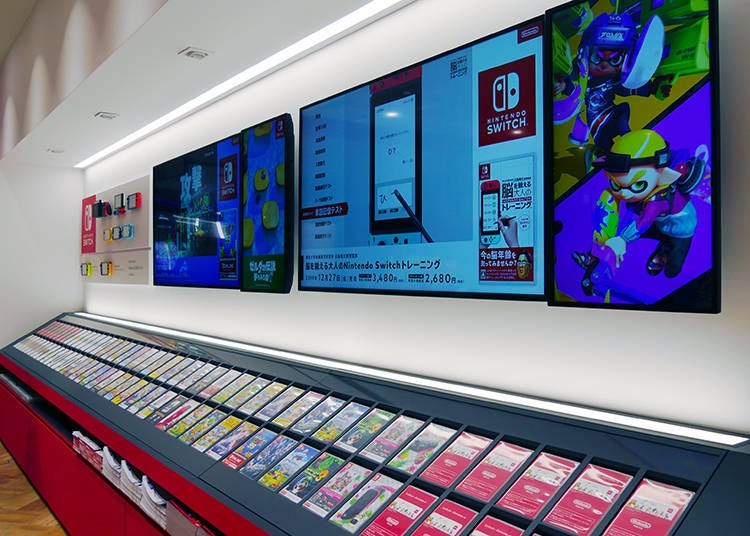 But wait, Nintendo isn’t famous for erasers and neckties. Doesn’t Nintendo Tokyo have any games?

They do in fact sell games. Against the wall near the cash register, is a line-up of about fifteen of Nintendo Switch’s latest titles, from Donkey Kong Tropical Freeze to Luigi Mansion 3 (nothing for the 3DS, or older consoles).

As of writing, their prices are actually cheaper than what you would normally find. For example, they have Super Mario Maker 2 for 5,980 yen, though is normally sold for about 6,230 yen at any Bic Camera or Yamada Denki.

In addition, Nintendo Tokyo also sells different colored Switch controllers (in case you’re getting tired of the red and blue) as well as other Switch necessities, such as adapters and wires.

Not sure what game to get? Try a demo on one of the four TVs set up in the shop, or even new accessories like the Ring-Con on a giant screen in front of the entrance.

It Is What It Is: A Nintendo Store in Tokyo for Fans 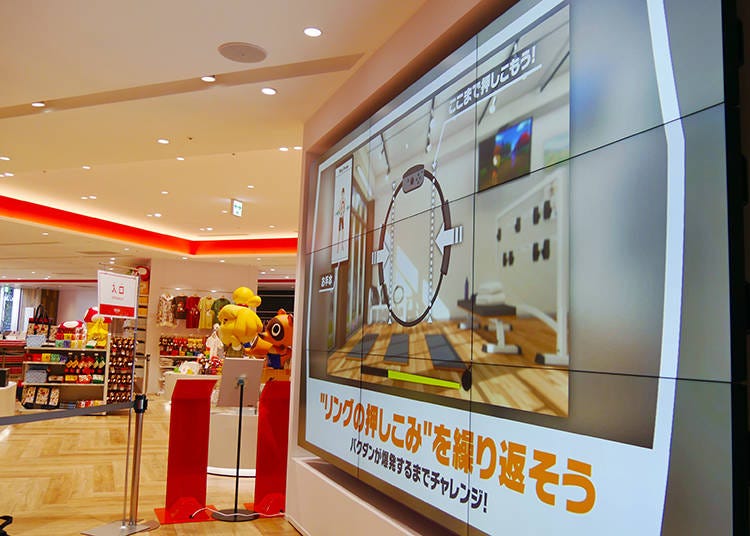 Unlike other game-themed shops like the Pokemon Center Tokyo or even Nintendo NYC, Nintendo Tokyo doesn’t have a café, doesn’t service to birthday parties, or have any events planned for the near future, according to their PR staff. Nor do they sell any of their items online. Instead, it is exactly as advertised: a shop for Nintendo fans. 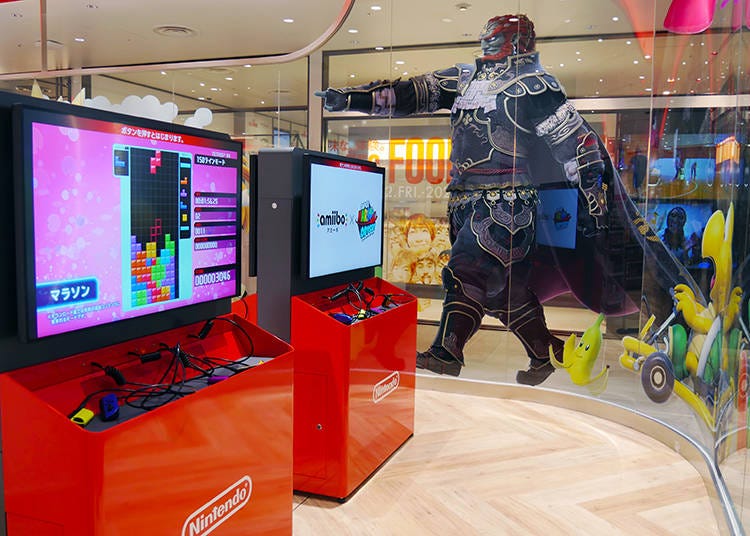 Despite a few exceptions, most of their prices are quite reasonable. And Nintendo Tokyo does a marvelous job of packing a ton of merchandise and Nintendo souvenirs without appearing like an overcrowded stockroom.

The story is bright and surrounded with color, there’s enough space to meander around, and the staff seem both happy and honored to work there.

Whether it’s a T-shirt to represent the Nintendoness in your heart, a Mario briefcase and necktie to take to work, a Kirby throw-pillow for the bed, or plush toys for the kids, Nintendo Tokyo has something for fans of all ages. 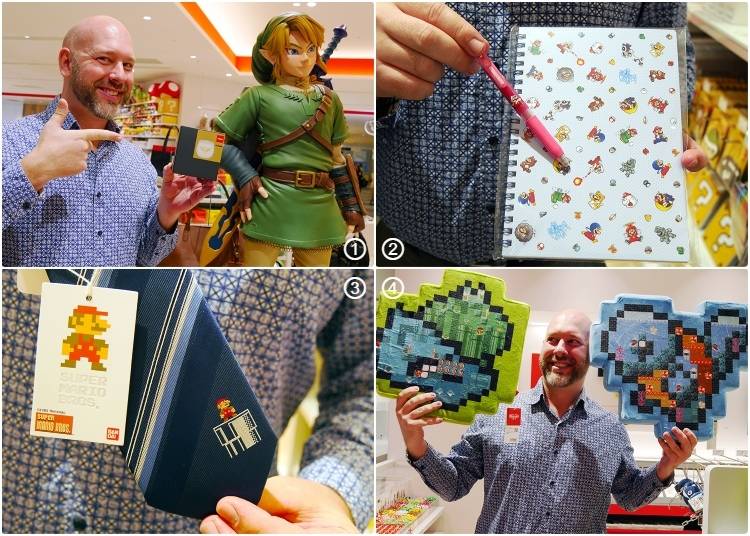 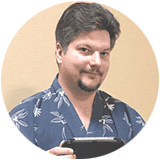 Damon Finos was born in Toronto, Canada, and has been living in Japan for 20 years. He has written several ESL textbooks, published short stories and flash fiction in online magazines, and articles for Trophy-Hunter.net, a website which focuses on gaming news, tips, and strategies. He has been playing video games nearly his entire life.