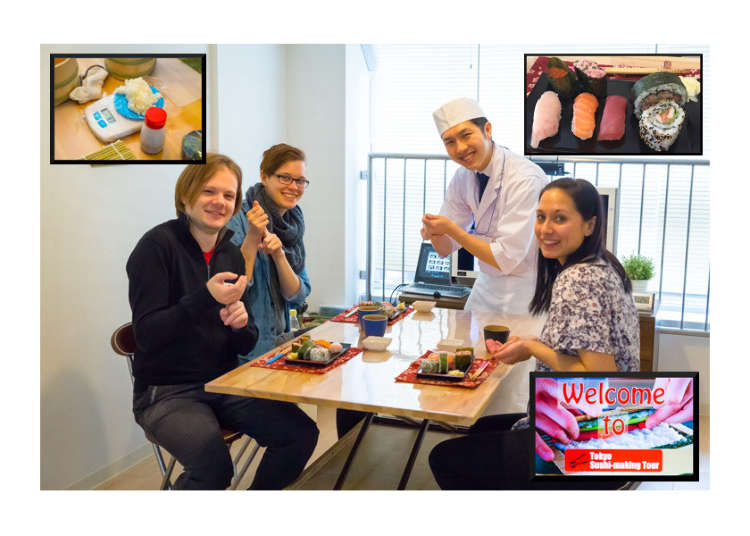 [MOVIE] Learn, Make, and Eat with the Tokyo Sushi-Making Class!

The LIVE JAPAN team recently had the chance to participate in a sushi making experience! During this small group lesson offered by Tokyo Sushi-Making Tour, we learned the history and customs surrounding Japan’s world-famous raw fish and rice cuisine, before rolling up our sleeves and making real sushi for ourselves! Best of all, we could eat all the sushi we made–and there was plenty! 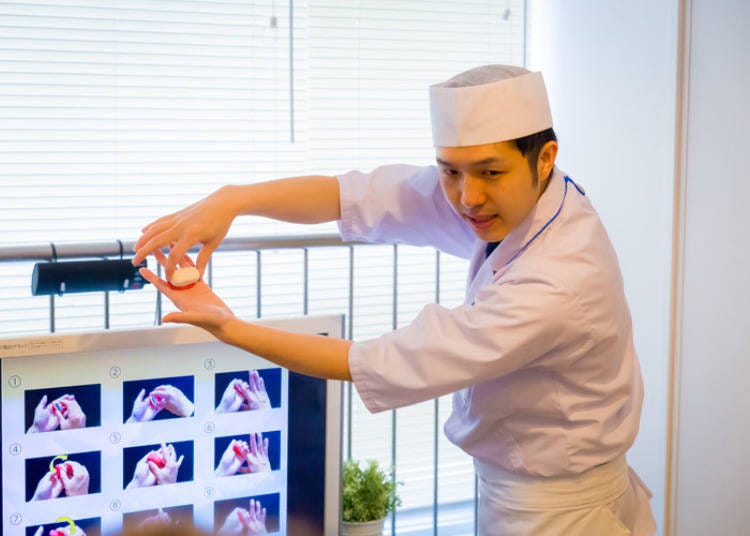 Before getting started, we had the chance to talk with Morris, our Japanese sushi sensei, and founder of the Tokyo Sushi-Making Tour. After studying English while traveling abroad, Morris decided to start the company as a way to provide visitors a “fantastic memory of Japan” by learning the art of sushi making. Since 2013, over 3,000 international visitors have attended the Sushi Making Class.

The Tokyo Sushi-Making Tour offers two types of classes: a Small Group Lesson for up to eight people, and a Large Group Lesson for groups of nine or more (even extra-large groups of over of 60 participants are welcome!). As there were just three of us, we took part in the Small Group Lesson, which is located in a cozy, home-style classroom just a few minutes’ walk from Kita-Senju Station in Northern Tokyo. 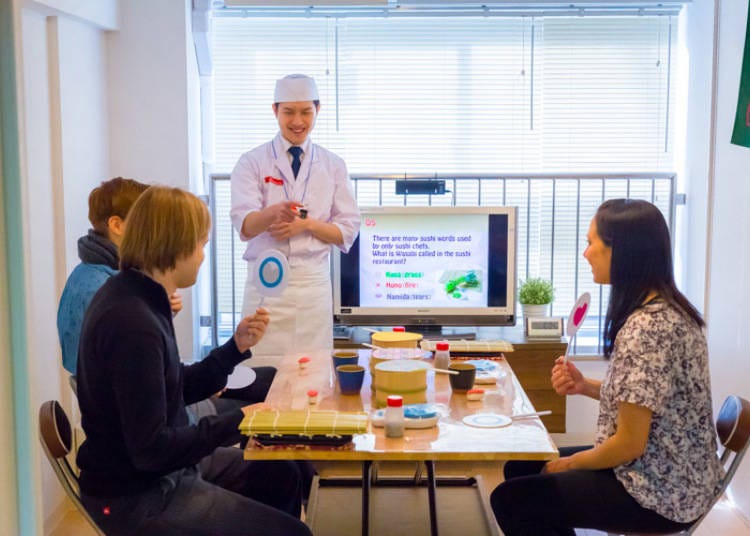 The first thing you should know about the Sushi Making Class is that it’s more than just a cooking lesson. We sat down at the table and Morris played a short video showing travelers in locations around the world. Rather than the typical tourist activities, the people in the video were shown participating in activities which allowed them interact with the locals while engaging with the culture. This is the heart of the Sushi-Making Tour: making a genuine connection with Japanese culture and its people through the experience of preparing one of the country’s most beloved cuisines.

We were then given a game show style quiz, during which we were asked multiple choice questions. Being the sushi-lover I am, I knew some of the answers right off the bat. However, there were a few that completely stumped me and my fellow classmates. We were also treated to a presentation on the history of sushi, beginning with its early origins as fish that was covered in rice balls as a means of preservation. This also relates to the reason why modern sushi is usually served two pieces per plate: the original rice balls were so large, they were cut in half before being eaten. 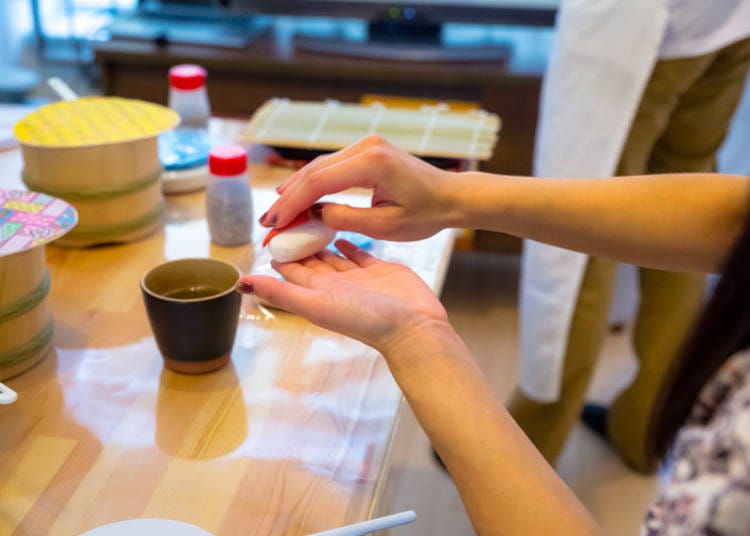 Nigiri is the name of the type of sushi consisting of a slice of raw fish on top of a vinegared rice ball. In other words, the sushi that is not a roll, or wrapped with seaweed. It may look simple, but to make perfect nigiri involves several steps, which we practiced using model “shari” (sushi rice) and “neta” (sushi topping; typically raw fish). Step by step, we carefully practiced each movement. We had started to get the hang of it, when Morris mentioned that sushi chefs perform this entire process in mere seconds! We may not have been anywhere close to the professionals, but we were beginning to understand the effort and skill required to make real sushi. 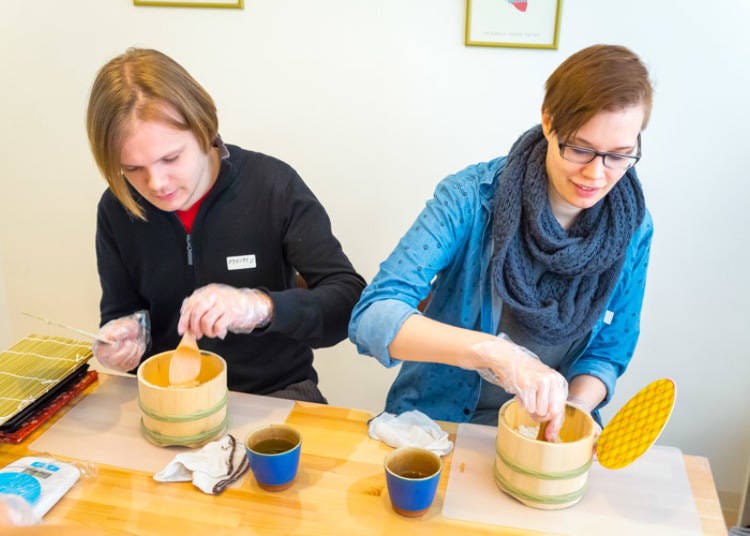 After practicing how to form nigiri sushi, it was time to prepare the shari. For sushi, rice is prepared with a mixture of vinegar, sugar, and salt. The exact ratio depends on the individual chef. To simplify the process, premade “sushi vinegar” can also be bought from just about any Japanese supermarket. Also, as Morris had explained earlier, sushi can only be made using a particular sticky, short-grain rice, rather than the long-grain varieties popular in many other countries.

To prepare the shari, each of us were given a wooden container of hot, cooked rice. Wood is traditionally used because of its ability to soak up any of the rice’s excess moisture. We each put a large spoonful of sushi vinegar over the rice. Instead of mixing in a circular motion, as you might a cake batter, we were instructed to make slices through the rice with a paddle, flipping it on occasion. Then, using a scale, we then measured out our vinegared rice into balls of varying sizes. 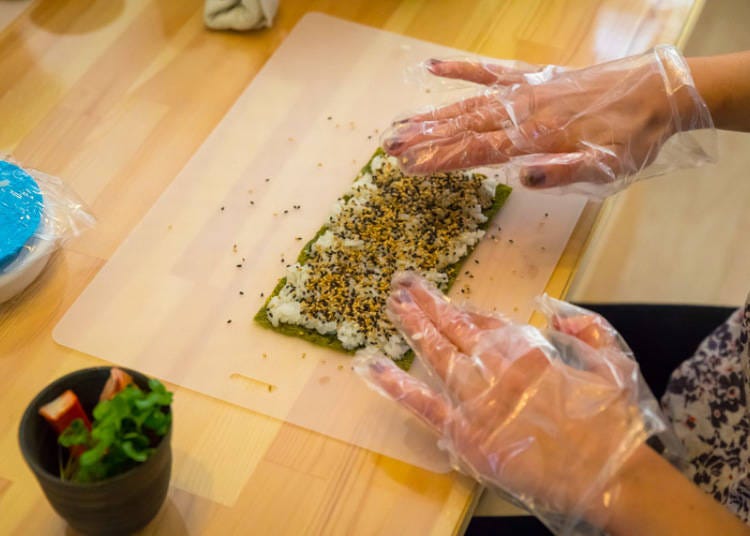 During the Sushi Making Class, we were able to learn how to make two types of “maki-zushi,” commonly known overseas as “sushi rolls.” The first was what our instructor referred to as a “reverse roll.” In Japan, the standard sushi roll is made with neta and shari that is wrapped in dried seaweed called nori. However, overseas, it is reverse rolls, with rice on the outside, that are among the most popular sushi. An example of a reverse roll is the California Roll. To make this kind of roll, we spread rice evenly across a piece of nori, and sprinkled sesame seeds on top. Then the nori is flipped over, so that the rice side is face down on a bamboo mat. We arranged our neta of imitation crab, sprouts, and salmon on the nori, and at last, we were ready to roll! We rolled the bamboo mat, along with shari and neta, while removing the plastic, and then cut it into a few pieces. Finally, we had made our first sushi rolls! 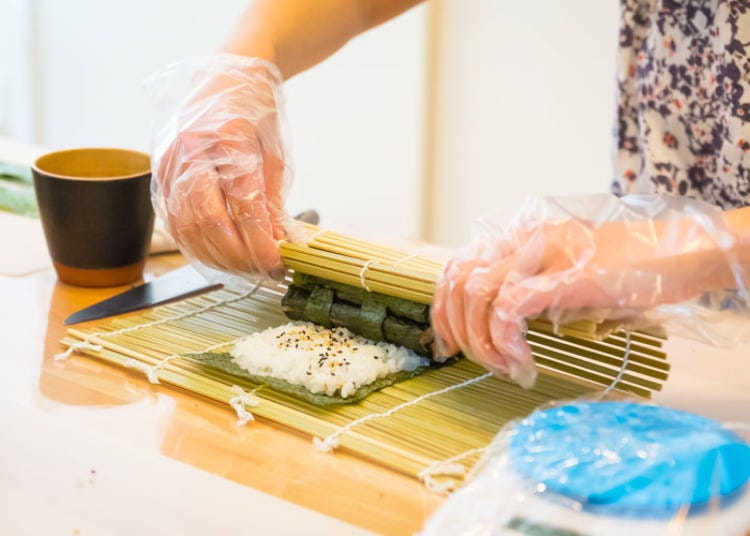 The second type of roll was what our instructor referred to as a “Decorative Sushi Roll.” For this sushi, we worked in pairs, using teamwork to make what was, without question, the prettiest sushi of the day. The result was a sushi roll with a brightly colored flower of neta inside. To make the pink petals, mentaiko (cod roe) rice topping, called “furikake” in Japanese, was sprinkled and mixed in a portion of rice. The innermost part was made from a single fish paste sausage. For this roll, various sizes of nori were used. It was more complicated than the first roll we made, but the final result was worth the extra work. 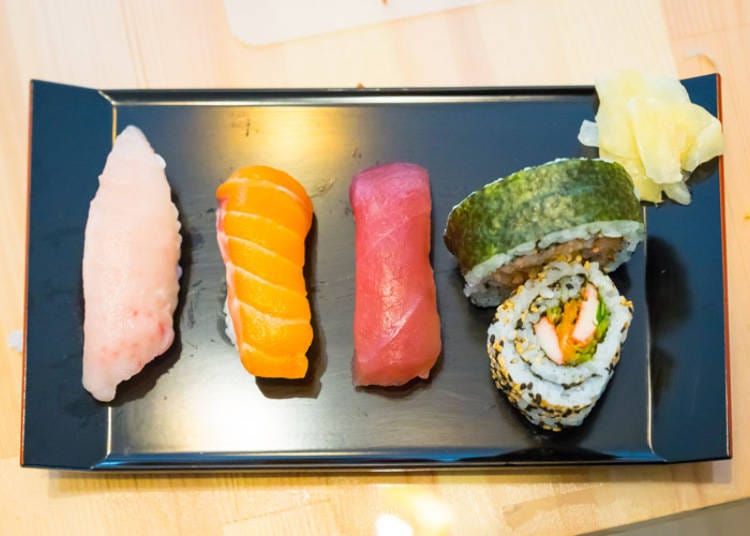 To make nigiri sushi (pronounced “nigiri-zushi” in Japanese), we recalled our initial practice with the model sushi. This time, however, we were using the genuine article. Of course, forming a properly shaped rice ball with real shari was quite a bit different, but it was even better to actually make it with my own hands. After a dab of wasabi, I placed the neta on top, and it looked like a real piece of nigiri sushi! We made three pieces of this sushi, using salmon, tuna, and Albacore tuna. 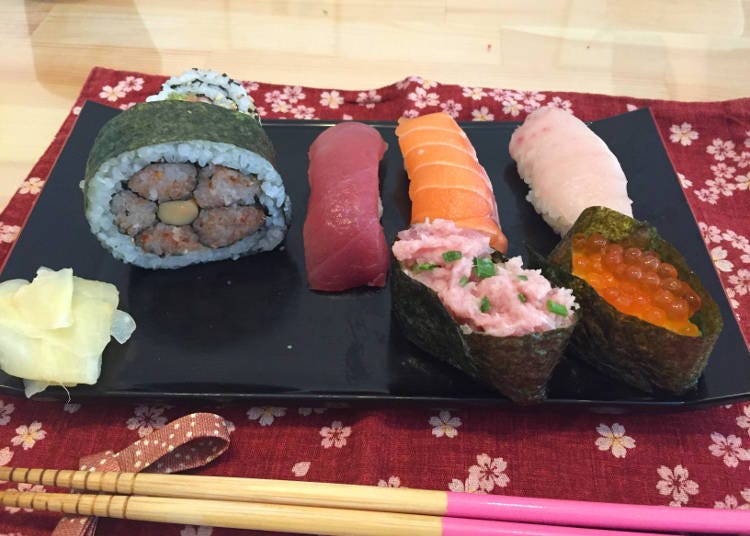 The final type of sushi we made was “Battleship Sushi,” called “gunkan” in Japanese. To make this sushi, nori is wrapped around oval-shaped rice and filled up with neta, in this case negitoro (a combination of chopped green onions and fatty tuna) and ikura (salmon roe). While not as complicated as the rolls, this battleship style still makes for an impressive, aesthetically-pleasing sushi.

At last, we arranged the sushi beautifully on plates, complete with a side of pickled ginger, called “gari.” But before eating, Morris went over a few phrases that are essential when dining in Japan, including the word for delicious, “oishii,” and the customary words spoken before and after eating a meal, “itadakimasu” and “gotchi-so-sama-deshita,” respectively. With our sushi plates fully prepared, and tea poured, we were ready for a sushi feast! While I’ve eaten countless pieces of sushi over the years in Japan, dining on sushi that I had prepared myself was satisfying in an entirely new way! 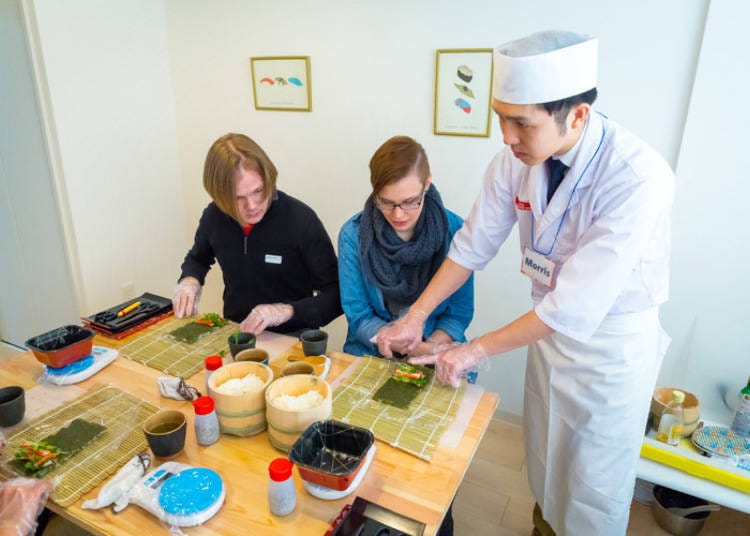 I asked one of my fellow classmates for her thoughts on the Tokyo Sushi-Making Class:

"I enjoyed the introduction a lot. The quiz was fun, some questions were challenging even for someone who has lived in Japan for a while / someone who is supposed to be a learned expert on Japan ^^;
I particularly liked Morris' way of uhm, hosting us you could say? He always engaged in conversation, there was no moment that felt unnatural or awkward despite being complete strangers and sitting in his private kitchen. It also felt like he asked all the personal questions out of genuine interest and not just for the sake of talking.

As for the actual sushi making, he did a marvelous job in making it feel like an authentic cooking class without being too serious about it. The little tidbits of knowledge he dropped in between the explanations were really interesting as well.

I was also positively surprised by how much sushi we actually made, it was basically a full course plus instructions plus entertainment. While I usually don't like going to someone's private home, I felt like in this case, it actually added to the entire experience - it was fun and cozy and it seemed more like we were hanging out with friend who happens to be a sushi chef.

In the West, sushi does have a reputation as a luxury food and I do think that this could intimidate some people into never even bother seeking out a sushi place in Japan because they fear it might be too expensive or something - I feel like there's no better way to convey sushi and Japanese food culture as a whole than in the way Morris and his Sushi Cooking does. It's fun, it's educational, and it does make the topic SO much more approachable." - Pamela

Try Your Hand at Making Some Tokyo Sushi 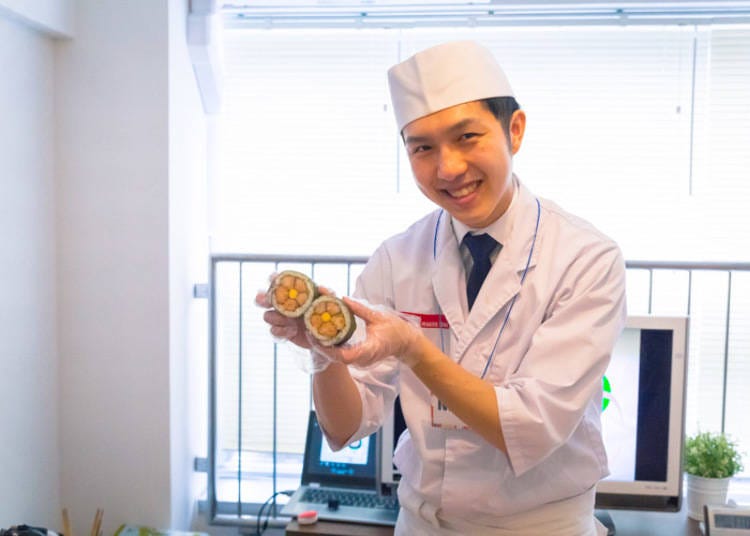 If you’re visiting Tokyo and would like to take your sushi obsession a step further, you should definitely consider reserving a spot with Tokyo Sushi-Making Tour! It’s a fun and delicious way to experience a part of Japanese culture that will, as promised leave you with a fantastic and unforgettable memory.