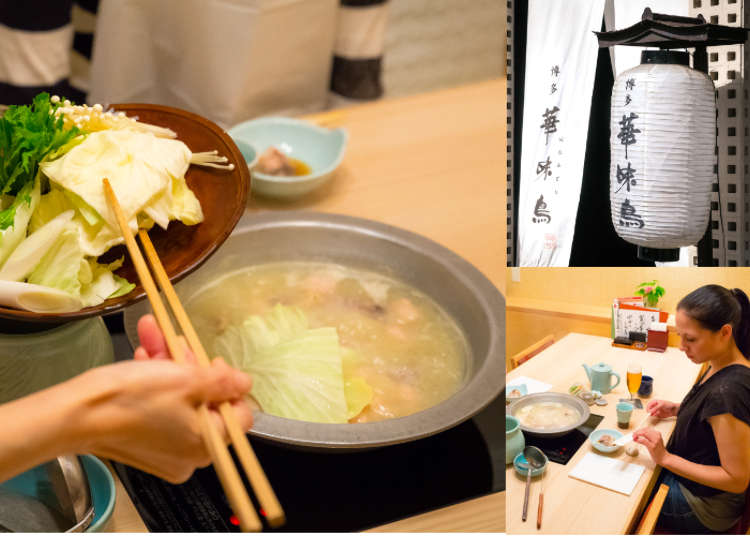 As the weather cools, there’s one dish that everyone in Japan looks forward to getting a taste of: nabe, otherwise known as the Japanese-style hotpot. LIVE JAPAN took a visit to Hanamidori in Ginza to try one of the best restaurants for the type of nabe called mizutaki.

What is Nabe? How is Mizutaki Different? 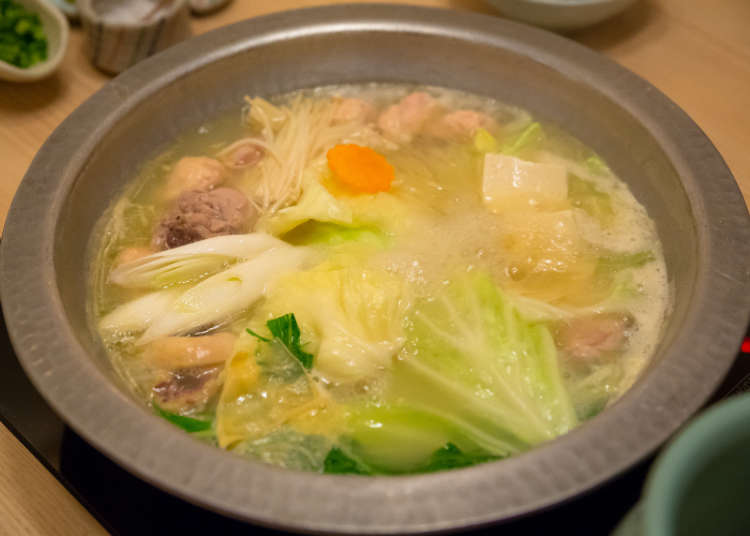 There are many kinds of hot pot dishes in Japan. You can find a number of variations on the cold weather dish, with ingredients such as fish, scallops, meat, mushrooms, leafy greens, and more, depending on the type, region, or personal preference. Nabe is often thought of as typical home-cooked type of meal. There’s nothing quite like gathering around a hot pot shared with family and friends in the comfort of one’s home. However, even if you are only visiting Japan, you can still experience a traditional hot pot meal!

I’m no stranger to nabe; I’ve tasted quite a few, and enjoy trying to cook my own version at home. Does this mean I’ve tasted them all? Certainly not! Always in search of a new food discovery, there was one particular type of nabe I was curious to try: mizutaki. Mizutaki is a type of chicken hot pot originating from Fukuoka Prefecture. Besides the main ingredient of chicken, what makes mizutaki quite unique is that a specific method of eating has been developed to maximize the tasting experience. 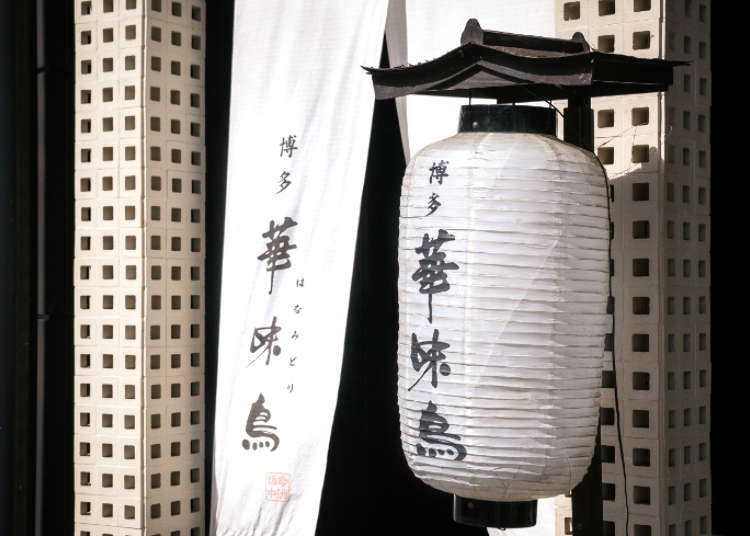 Mizutaki is a specialty of Fukuoka, so finding this type of nabe outside of Kyushu can be a bit of a challenge. Luckily, Hanamidori, one of Hakata, Fukuoka’s best restaurants for mizutaki, has branches across Japan, as well as in Taiwan, China, and Singapore. My friend Kaori and I visited the Hanamidori in Ginza, but there are in fact, several other Hanamidori locations throughout Tokyo.

The restaurant itself has a traditional sophistication about it, but still has a comfortable atmosphere, so we could easily relax throughout our meal and make ourselves ‘at home’ to a certain extent. An English menu is available, so even customers without the slightest knowledge of Japanese can order without concern.

Preparation and an Exquisite Broth 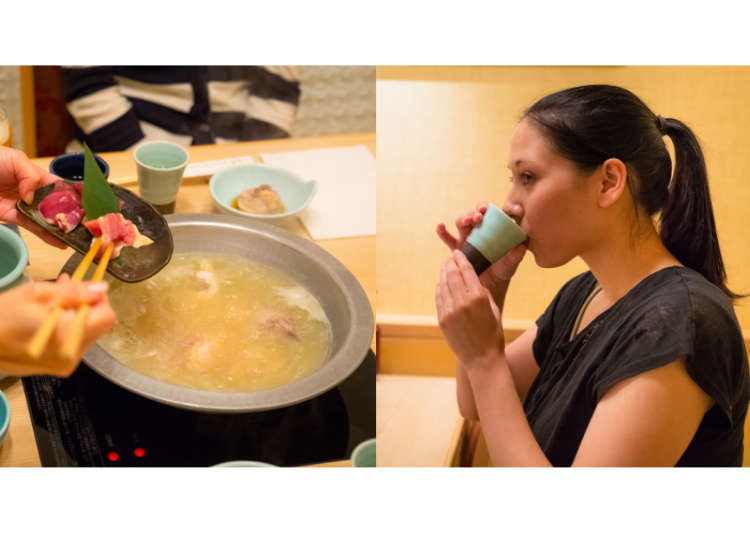 Kaori and I ordered the “Hanamidori Mizutaki Aji Course.”（The price is 4,200 yen per person. A minimum of two people are required.) This is the base nabe of the shop. For those who are feeling especially hungry, course meals are an option, as well as additional items. To begin, our hostess for the meal placed a shallow pot on top of the electric burner located in the center of our table, into which, a light,salty broth made from a chicken-based stock was poured. As the liquid began heating up, large pieces of chicken leg meat were placed in the pot. We sipped drinks and waited for the first taste as the savory aroma of the nabe began to fill the room. After a few minutes, the froth floating on the top of the liquid was skimmed out, and the broth was poured into two soup cups. While this smooth soup appeared to be simple, its flavor was intense and flavorful. It’s worth noting that unlike other kinds of soup, this is meant to be sipped straight from the cup, rather than ladled from a spoon.

The First Taste of Savory Chicken 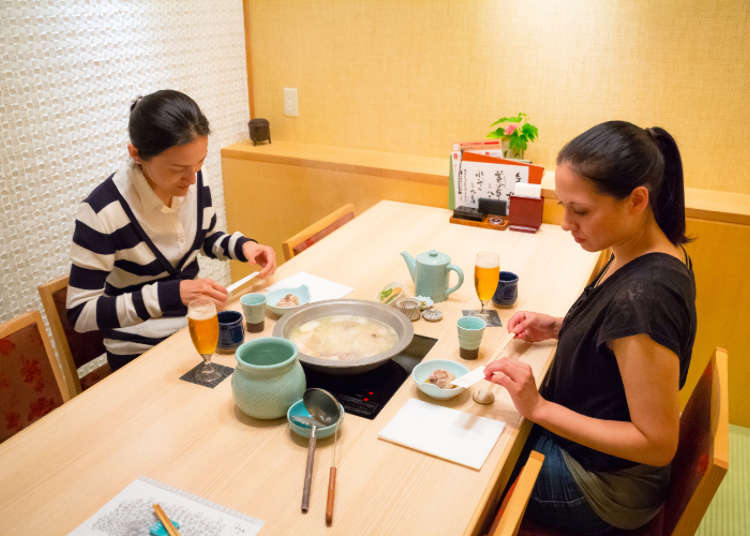 I still had not finished the soup before my first piece of chicken was ready to be savored. The chicken legs were placed into bowls with a small amount of ponzu, which is a tart, citrus-based sauce. Before I took my first bite of the juicy meat, I took full advantage of the optional toppings on the table: a generous helping of chopped scallions, and a dab of the spicy-citrusy yuzu-kosho (a paste made from chili peppers and the Japanese yuzu fruit) completed my chicken preparations.

While it was a bit tricky to pick up such a large piece of meat without the aid of a fork and knife, the chicken looked so delectable that nothing was going to get in my way! The meat was tender and delicious. Once we had eaten all of the meat, we put the bones in the provided pot. But there was still more to come… 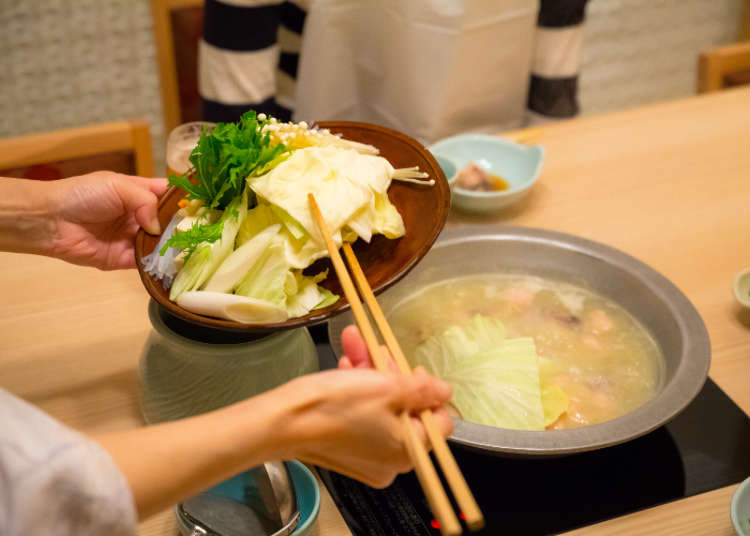 Now that our tastebuds were properly warmed up, it was time to move on to the next stage! The next ingredients added to the pot were chicken thighs, liver, and minchi. The minchi, which are basically meatballs, were made right before our eyes, as a minced chicken meat and egg mixture were formed into perfectly formed balls and put into the nabe. Next was an item you’re not likely to find in a Western-style hot pot: collagen. Collagen has become a very popular ingredient in Japan due to its reported beauty benefits, and it thickened the nabe quite nicely. A plate full of vegetables was also carefully placed among the other ingredients. This included carrot, cabbage, mizuna (a type of Japanese mustard), enoki mushrooms, leeks, and also kuzukiri, a long starchy noodle-like food made from the root of the kudzu plant. 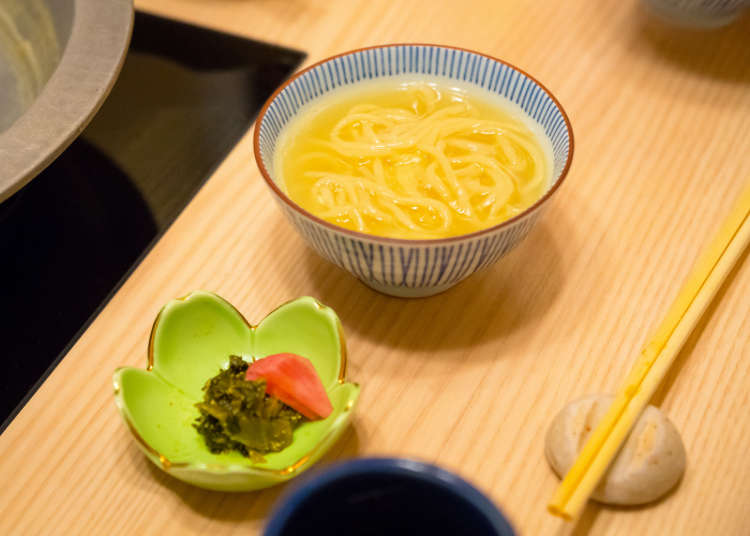 We finished the last of the hot pot, and said our goodbyes to the staff, any hunger fully satiated by this point. While sushi and ramen may be more well-known foods from Japan, if you want to try a true homestyle meal from Japan, you really need to get a taste of nabe, and if you have the chance, I highly recommend mizutake!