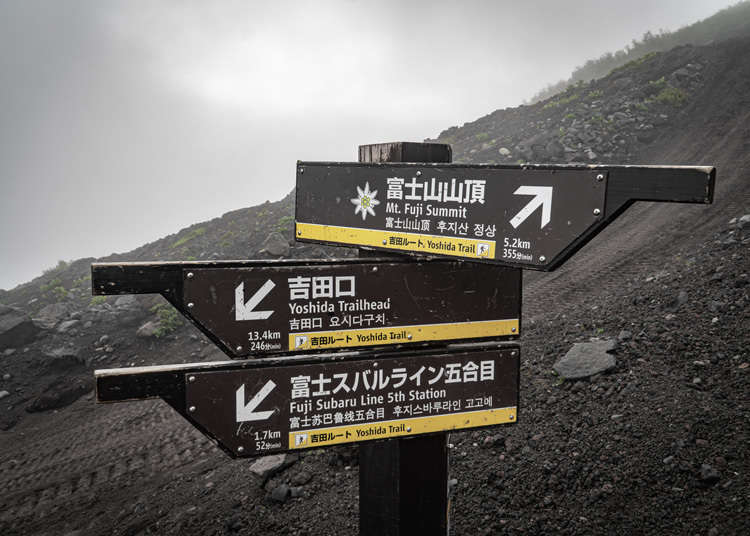 Of Mt. Fuji’s climbing routes, the Yoshida Trail is used by the largest number of climbers. It’s a varied path that features both flat and zigzagging sections. Here are the basics of the Yoshida Trail, including its features and facility information.

Features of the Yoshida Trail 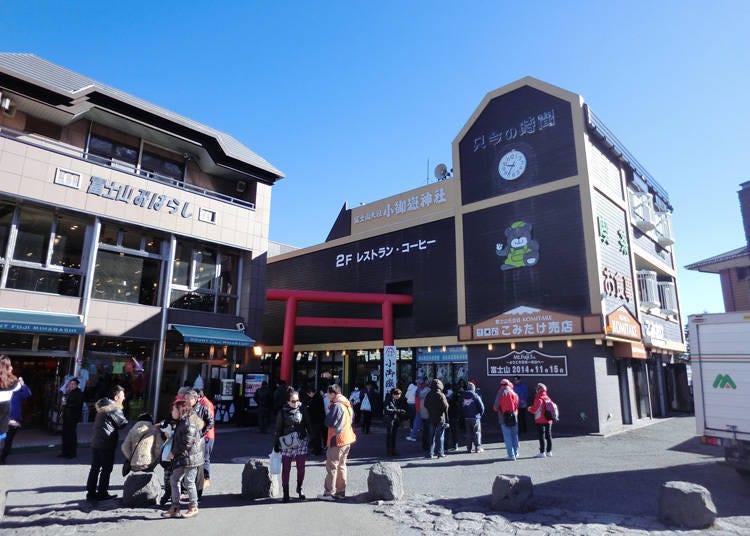 Located on the Yamanashi side, the Yoshida Trail leads to the summit on the Mt. Fuji’s north side and is used by more than half of those who climb the mountain. Starting from the Fuji Subaru Line Fifth Station, the trail converges with the Yoshidaguchi Trail at the Sixth Station.
Fifth Station altitude: 2305m
Round trip distance: about 14km (ascent 6.8km; descent unspecified)
Approximate climbing time: about 6 hours to ascend; about 4 hours to descend
One notable difference between the ascending and descending portions of the trail is the number of mountains huts. The ascent has plenty for climbers to rest, but there are almost none on the way down. 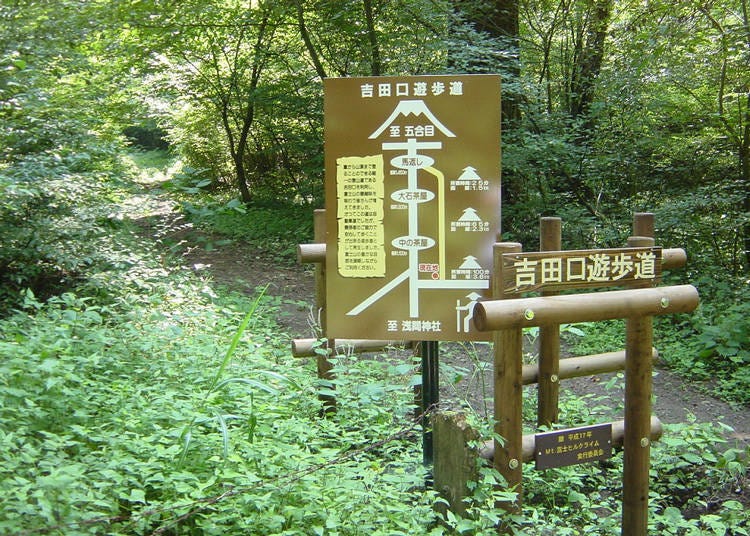 Starting from the Fifth Station of the Fuji Subaru Line, the trail is flat and wide before coming to the first fork at Izumigataki. From there climbers can continue the ascent or head to Yoshidaguchi Fifth Station.

The journey to the Sixth Station is steep and passes through the tree line. As you approach the station you’ll see the Mt. Fuji Safety Guidance Center and from there the Yoshida Trail joins the Yoshidaguchi Trail that starts below, at Kitaguchi-hongu Fuji Sengen Shrine. On this section of the trail, be careful of heat stroke because there isn’t much shade.

Since the route from the Sixth Station is steep, mountain climbing equipment will be required. The trail zigzags on for a while and then you’ll come to the Seventh Station and the first mountain hut, “Hanakoya.” After the hut, there are numerous steep, rocky points. Depending on the season, the number of night climbers attempting to reach the summit in time to see the sunrise may be high, congesting the trail.

As the altitude exceeds 3000m at the Eighth Station, the number of people who experience altitude sickness will increase. The Yoshida Trail merges with the Subashiri Trail at the Original Eighth Station.

The Yoshida Trail descent follows a different path than the one that leads up Mt. Fuji and from the summit down to the Eighth Station (Shita Edoya) it again shares the same course as the Subashiri route.

Be careful not to miss the yellow signs marking the Yoshida Trail, which is often confused with the Subashiri Trail at the junction near Shita Edoya. If you take a wrong turn and end up on the Subashiri Trail, you’ll have to complete the trip down the mountain by bus from the Subashiriguchi Fifth Station.

From the Seventh Station, the trail leads down to the Sixth Station and then on to the Fifth Station of the Fuji Subaru Line.

Main Facilities on the Yoshida Trail

Facilities between the Yoshida Trail Sixth and Seventh Stations

Vacancy is limited, so reservations are recommended.

Also take note that the Yoshida Trail is often crowded. And remember, since there are few facilities on the descending trail, be careful to rest at the summit and take advantage of the toilets located there.

Climbing Mount Fuji for Beginners: Trails, Preparation and Access!
What To Know About Climbing Mt. Fuji
16 Secrets About Mt. Fuji, the Symbol of Japan: Even Japanese People Don’t Know That?!
*This information is from the time of this article's publication.
*Prices and options mentioned are subject to change.
*Unless stated otherwise, all prices include tax.