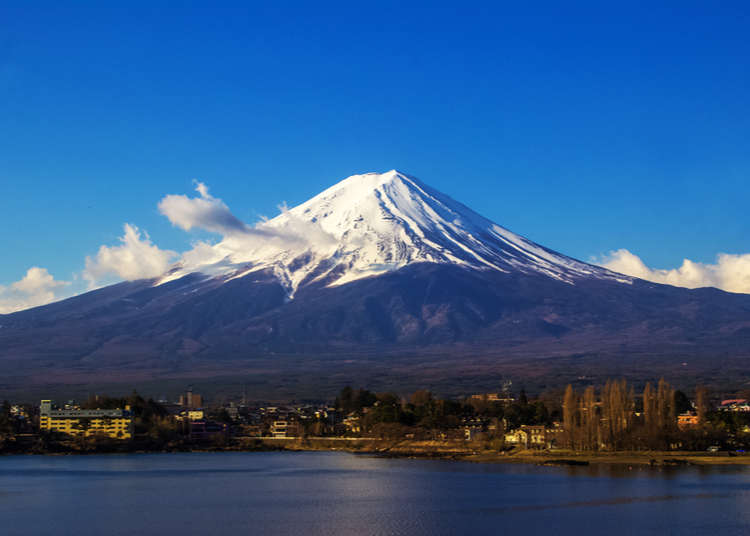 Mount Fuji is the symbol of Japan and pretty much everyone who comes to Japan wants to see it first-hand. But Mount Fuji isn’t always visible from Tokyo and even if you stay for a week, weather and season might have it hide behind clouds the entire time. So, when are the best chances of seeing Mount Fuji?

Which season is the best, when is the best time of day? How is the weather connected to how Mount Fuji looks? We’ll tell you when to best see Mount Fuji in all its glory from various angles! 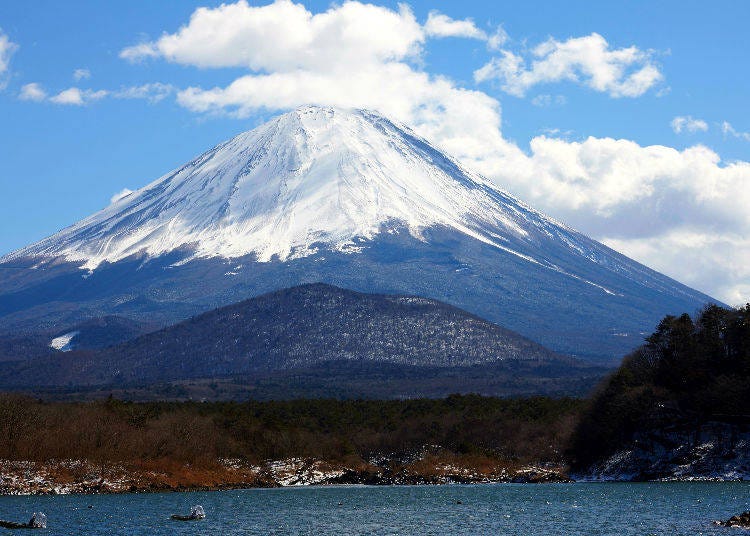 Mount Fuji is 3,776 meters high and the tallest mountain in Japan. It has been an object of faith and worship since ancient times for the Japanese people and has inspired countless paintings and poems – in short, it is dear to an entire nation. With this background, it has been registered as a UNESCO World Cultural Heritage site in 2013.

Mount Fuji is in south-south-west direction of Tokyo, sitting right at the border of Tokyo’s neighboring prefecture Yamanashi and Shizuoka next to it. The mountain’s closest station is Fujisan Station on the Fujikyuko Line. From Tokyo, first go from Shinjuku Station to Ōtsuki Station via JR Chūō Main Line (Express), then transfer to the Fujikyuko Line to Fujisan Station. There’s also an express bus from Shinjuku Station and both routes take about two hours. The train fee is 3,270 yen while the bus costs about 2,000 yen.

About 10 minutes away from Fujisan Station is Lake Kawaguchi, a famous scenic spot known for its stunning contrast between clear lake and Mount Fuji.

What You Need to Know for Seeing Mount Fuji First-Hand 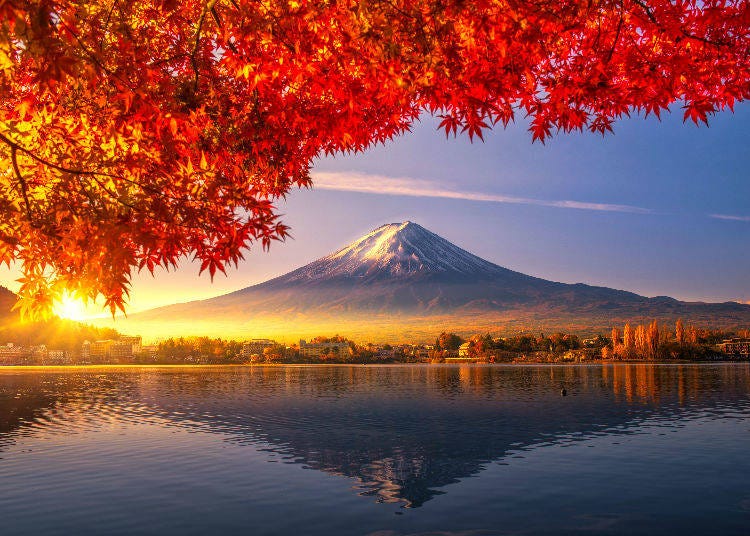 If you want to see Mount Fuji from Tokyo, you need to know that the mountain’s appearance varies greatly by season. It is visible from the capital on many days between November and February, while very rarely between April and August. The chances of seeing the mountain are also rather low in September and its typhoon season.

Hence, Mount Fuji is best visible from autumn to winter. The following graph by Fuji City shows the ratio of the number of days on which Mount Fuji was visible at 8 a.m. The data is as of 2017 and it also illustrates that the chances are best throughout winter, making it the prime Fuji spotting season. 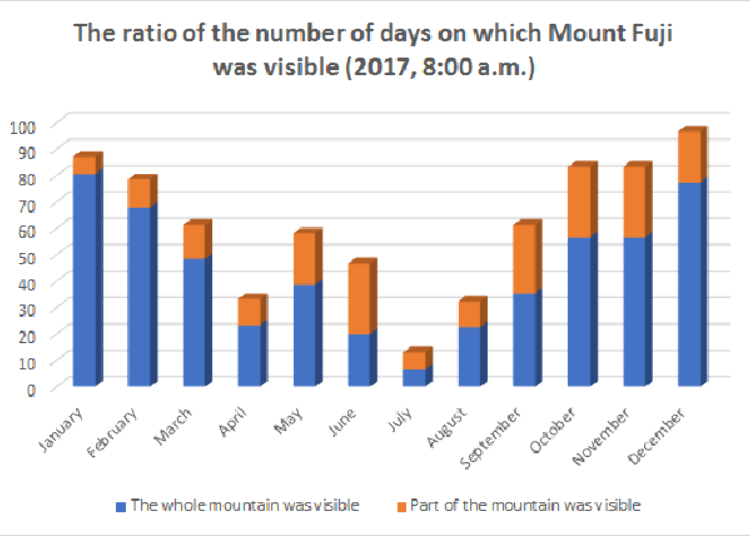 With a chance of 77.4%, December is the best season to see Mount Fuji. Even the chances of seeing only some parts of the mountain are high with 19.4%, and there was only a single day (3.2%) on which it couldn’t be seen at all. 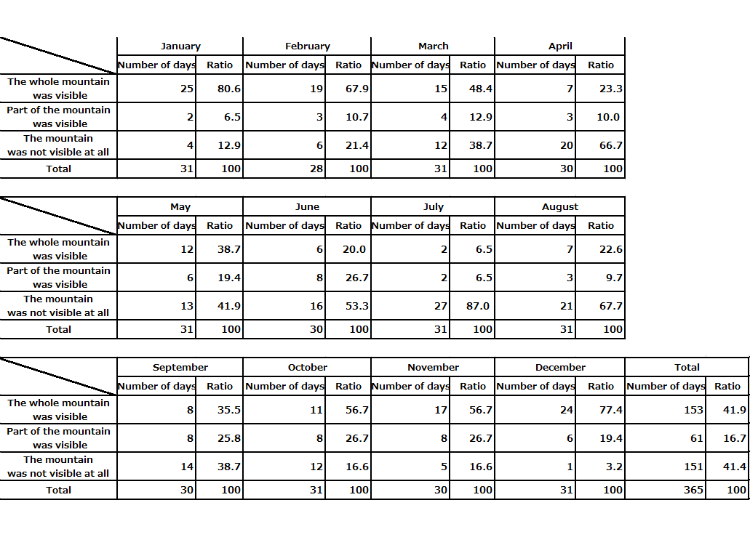 Additionally, January had even better results: Mount Fuji was visible in its entirety a full 80.6% of the month, even more than in December. However, this depends on the weather and climate and there are some years in which visibility is better during December, and some years in which January is the prime month. That’s why it is said that winter, including both December and January, is the best time of the year to see the mountain. Mount Fuji during winter is stunningly beautiful, coated in pure white snow and visible even from far away thanks to the dry air.

Furthermore, February still carries the chilliness of December and January while November marks the change from autumn to winter – both months have figures of high chances of seeing Mount Fuji. It is 67.9% in February and 56.7% in November.

Looking at several past years, you’ll come across summers in which Mount Fuji’s visibility sits at 0% for July and/or August every once in a while. If you plan a trip to Japan during summer, it may be smart to not expect too much in terms of being able to gaze at Japan’s most iconic mountain. On the other hand, if you get to spot it during the hot months, you can consider yourself kissed by luck!

The data makes clear that the chances of seeing Mount Fuji greatly depend on the season. If Mount Fuji is on top of your must-see list when coming to Japan, you should choose the timing of your trip accordingly.

2) When is the Best Time of Day to See Mount Fuji? 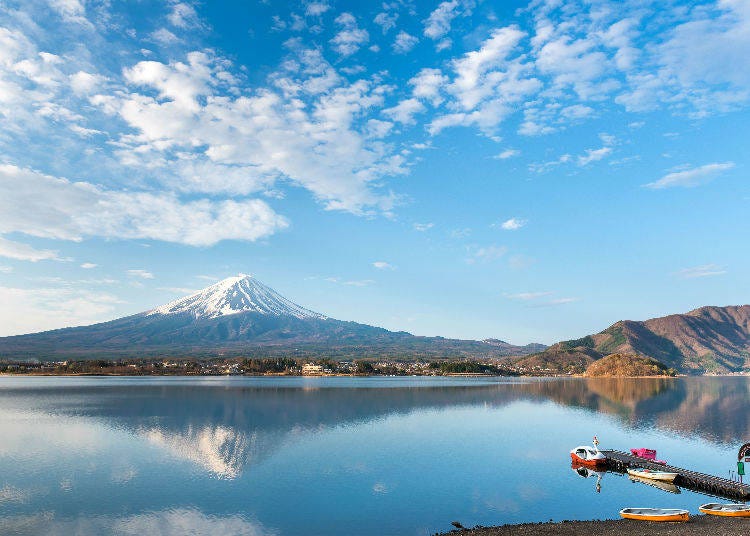 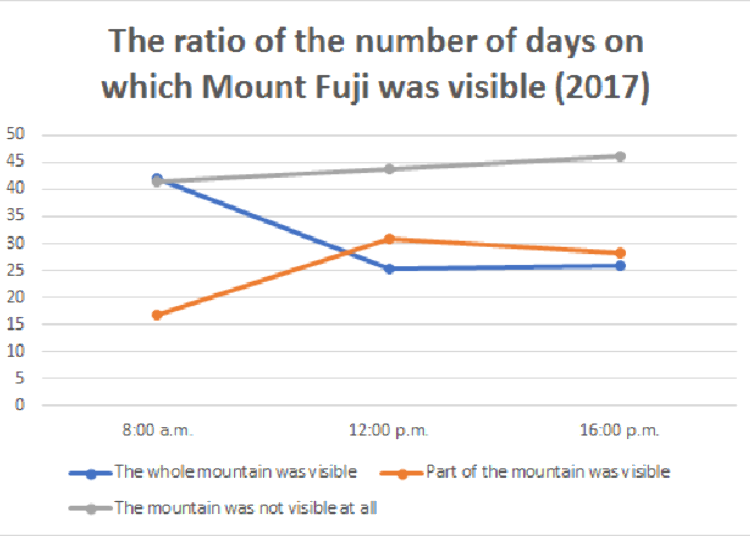 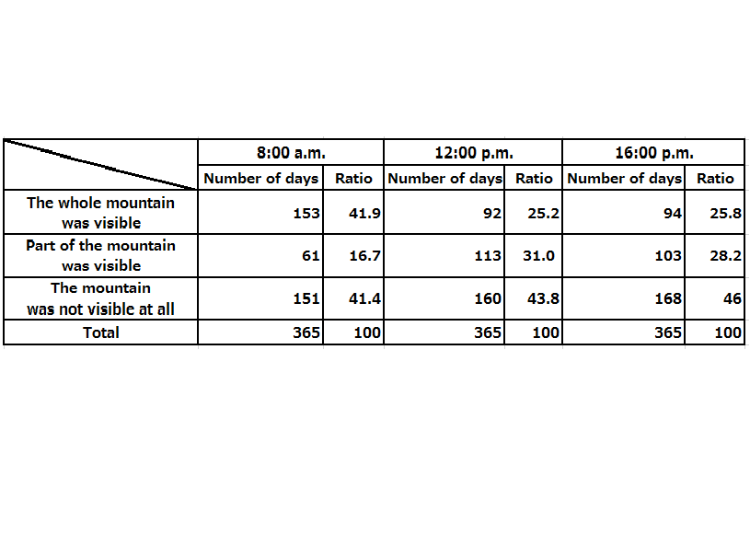 However, the difference is very small on days on which Mount Fuji cannot be seen at all (with 10% even in years with big differences). There are considerable differences regarding time of day as to how well the full mountain can be seen. 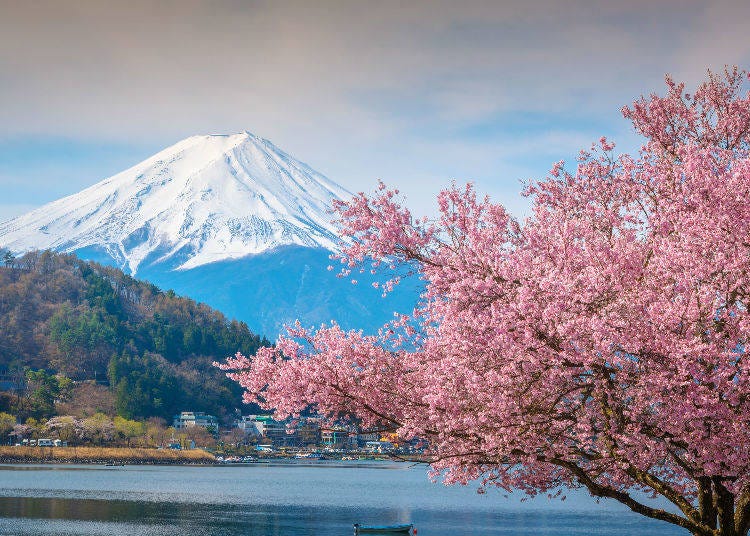 It’s rather obvious that Mount Fuji cannot be seen during cloudy or rainy weather, but on the other hand side, sunny weather in flat areas such as Tokyo does not guarantee a beautifully visible mountain. 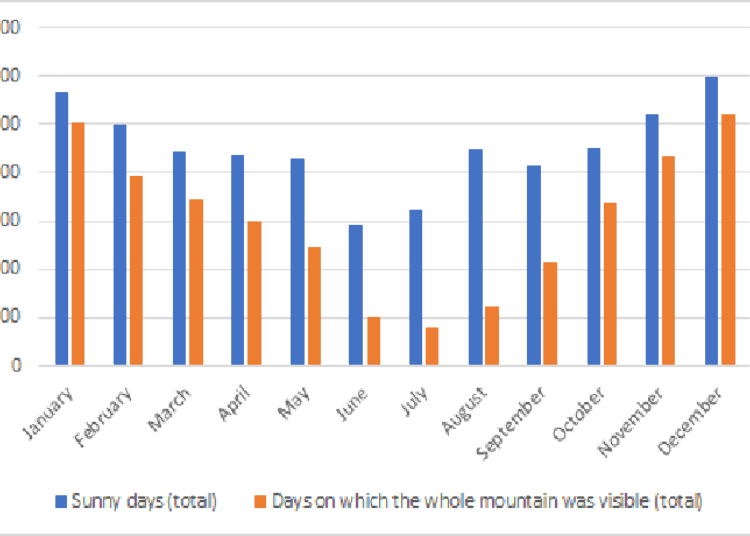 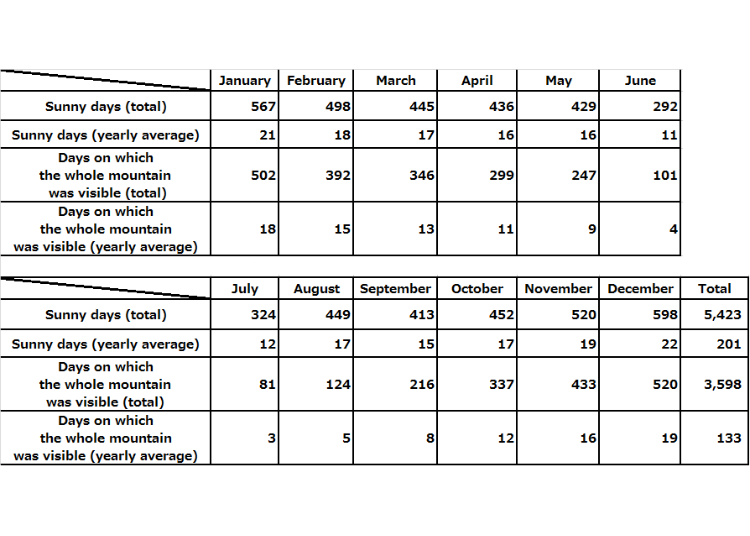 According to Fuji City’s results of observing “the relationship between the weather on the ground and Mount Fuji’s visibility,” there is not much difference between sunny days and days on which the mountain can be seen as a whole between January and April, as well as between October and December. However, even fair weather may have Mount Fuji hidden behind haze or clouds between May and September that’s a rather large difference there. 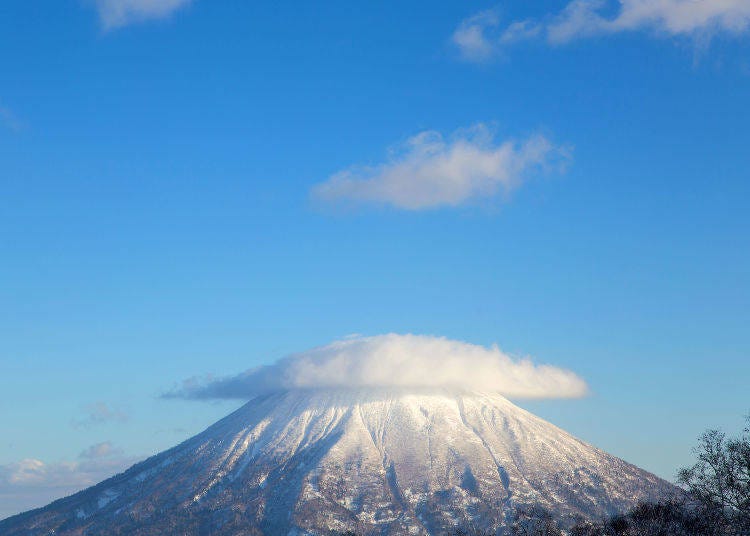 Additionally, when Mount Fuji is surrounded by clouds (except those that are above the summit), it often is a precursor to rain. People living in the flatland around Mount Fuji use this as one staple method to predict the weather.

4) From Which Spots in Tokyo Can Mount Fuji be Seen the Best? 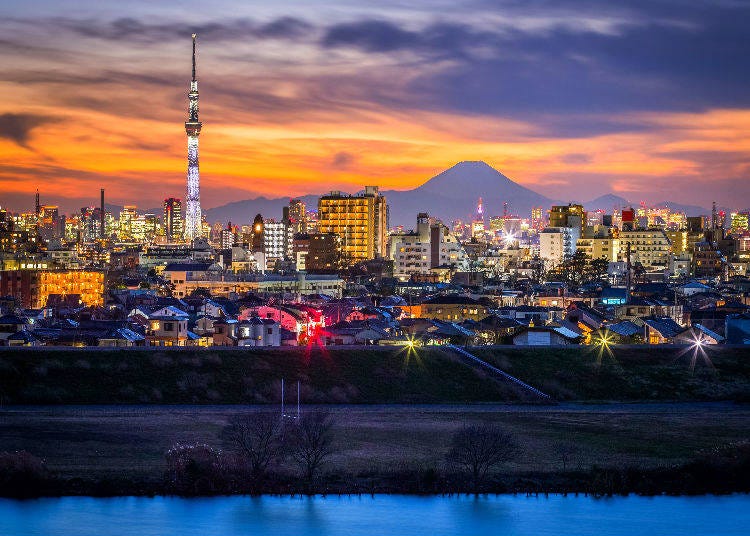 There are various spots all around Tokyo from which you can get a nice view on Mount Fuji, with the prime choices being observation platforms such as the Tokyo Metropolitan Government Observation Deck, Tokyo Tower, Roppongi Hills, and Tokyo Skytree. But there are also other places that are not extremely high up. If you walk north towards Ebisu Station from Meguro Station, go towards Ebisu Garden Place and descend westward from Fujimisaka (between Meguro-ku Meguro 1-Chome and Shinagawa-ku Kamiōsaki 2-chome). There, you’ll see Mount Fuji right in front of you.

Another good spot is Mount Takao, although it is about an hour by train from Shinjuku Station. From the nature-rich spot, you’ll often get to see Mount Fuji. On top of that, Mount Takao is a wonderful natural getaway if you need a break from Tokyo’s hustle and bustle.

Mount Fuji can also be seen well from the observation deck on the 5th floor of Haneda Airport’s International Terminal. This is also the only spot that is open 24 hours, so if you happen to have a flight early in the morning, make sure to stop by that observation deck. It’s very likely that you’ll be able to see Mount Fuji in the soft glow of the early morning.

5) Taking the Shinkansen from Tokyo to Kansai: Where to Sit to See Mount Fuji 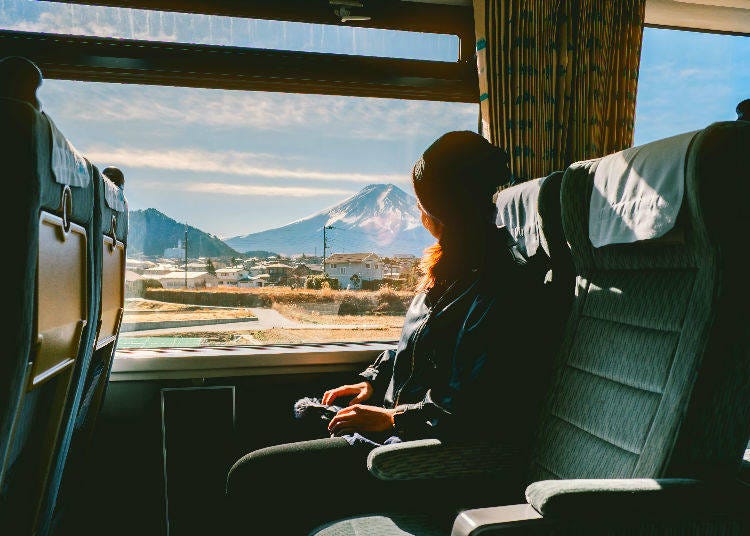 Mount Fuji sits on the prefectural border between Yamanashi and Shizuoka Prefecture, south-south-west of Tokyo. If you travel between Tokyo and the Kansai area (Osaka, Kyoto, and so on), you are able to see the iconic mountain from the Tokaido Shinkansen.

Sit on the right side of the travel direction if you go from Tokyo to the Kansai area and you will have a wonderful view of the mountain.
Likewise, going from Kansai to Tokyo, try to sit on the left side of the direction of travel. The mountain can be seen from Shizuoka Station, about 1 hour and 40 minutes into the journey from Shin-Osaka Station.

The part where Mount Fuji can be seen is the second section if you come from Tokyo Station, between Shin-Yokohama Station and Shizuoka Station. It also looks beautiful from Atami Station which is about 35 minutes after Tokyo, and the part between the three stations of Atami, Mishima, and Shin-Fuji offer a great view. However, note that only the “Kodama” Shinkansen stops at Shin-Fuji Station.
If you come from Osaka and ride the Tokaido Shinkansen’s “Hikari,” we recommend having your camera at the ready from Shizuoka Station. It is about 1 hour and 40 to 50 minutes away from Shin-Osaka Station.

The earliest Shinkansen “Nozomi” does not stop at either Atami, Mishima, Shin-Fuji or Shizuoka Station. As a rough guide, get ready around 30 minutes after departing from Tokyo and right behind Atami Station. Coming from Shin-Osaka, it takes about 1 hour and 40 minutes until you need to pay attention, right after Shizuoka Station. 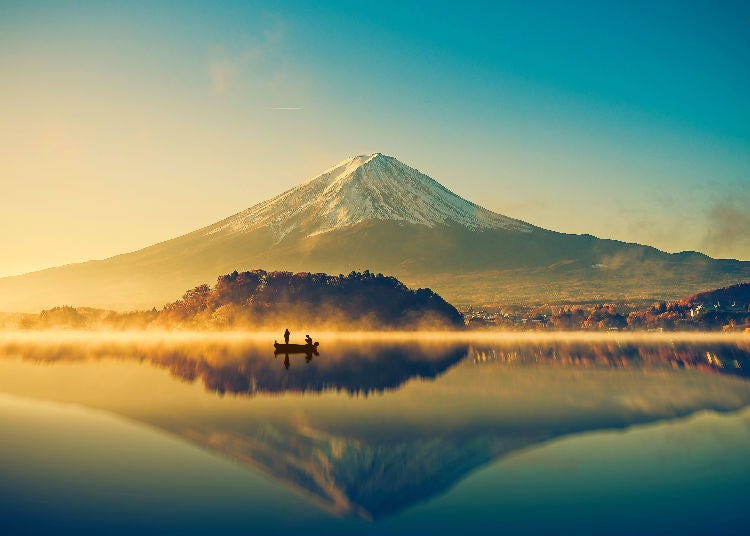 Mount Fuji is synonymous with Japan itself and a must-see for pretty much every tourist and traveler. Knowing the best and worst timings when the mountain is visible does drastically increase the chances of making the most out of your Mount Fuji experience! If you’ve planned a trip to Japan in summer, it might be best to not focus on the mountain too much and instead enjoy the many other experiences that a Japanese summer has to offer. Winter, on the other hand, will offer you spectacular views and it would be a shame to miss out on the stunning view of Mount Fuji! We hope that our little guide will help you make the most out of your trip!