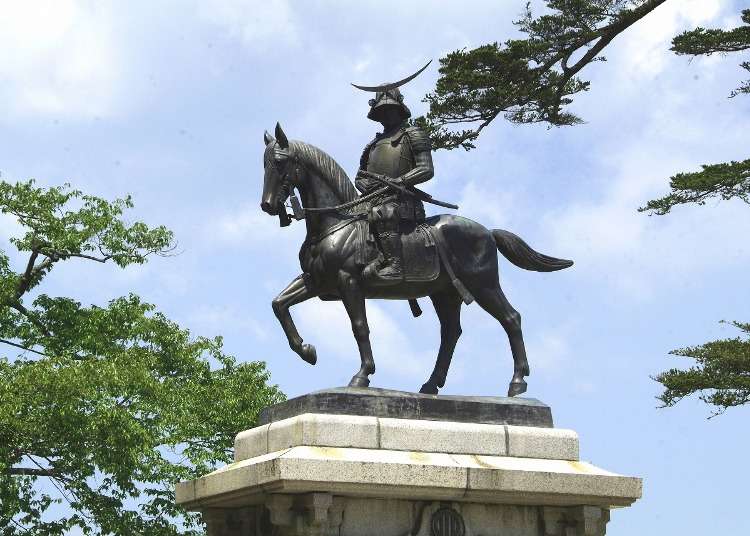 Date Masamune was a legendary Japanese military commander of the Warring States period who laid the foundations for Sendai City.

Nicknamed ‘The Hero of the North-east’ and ‘The One-eyed Dragon,’ his trademark eyepatch, jet-black armor, and crescent helmet are now seen as the epitome of ‘ancient cool!’ Often featured in TV shows, anime, and even games, his popularity is ever-growing, even overseas.

Here we’ll take you on a tour of Sendai through the life of this remarkable legend. From castle ruins to ancient temples, following the footsteps of Date Masamune is the perfect way to appreciate the beautiful city of Sendai.

So, Who Was Date Masamune? 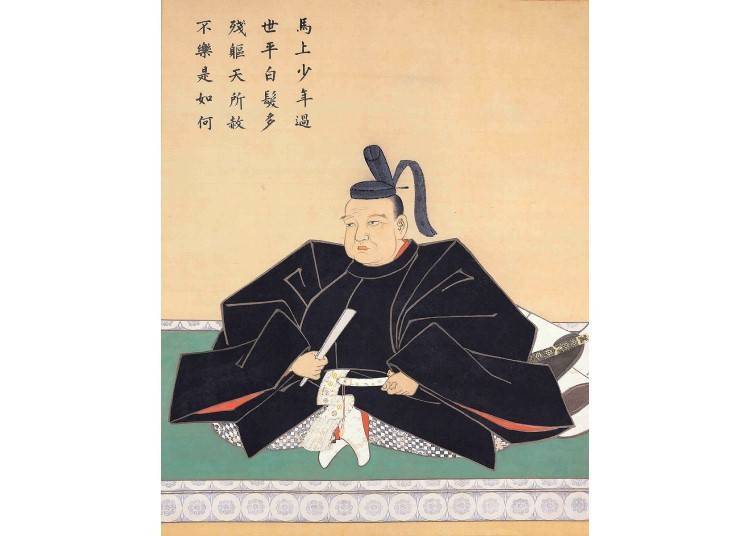 Born in 1567 in what is now Yonezawa City in Yamagata, Date Masamune was a famed Japanese military commander. Losing his right eye to smallpox as a child, he was given the nickname ‘The One-eyed Dragon,’ modeled after Chinese military governor Li Keyong.

When Masamune turned 18 (1585), he inherited his family’s legacy, and by 23 (1590), he presided over the largest domain his family had ever owned. At 24 (1591), he began to serve for politician Toyotomi Hideyoshi and headed for what is now Iwadeyama in Miyagi Prefecture.

At age 35, after the death of Hideyoshi, he established the Sendai Domain and built Sendai Castle under the rule of Tokugawa Ieyasu.

Aiming to create a world of peace and stability, he strove to establish new rice fields and improve both land and water transportation. In 1636, he passed away at 70 in the Sendai residence in Edo City (present-day Tokyo).

Exploring Sendai is Easy with the Loople Sightseeing Bus! 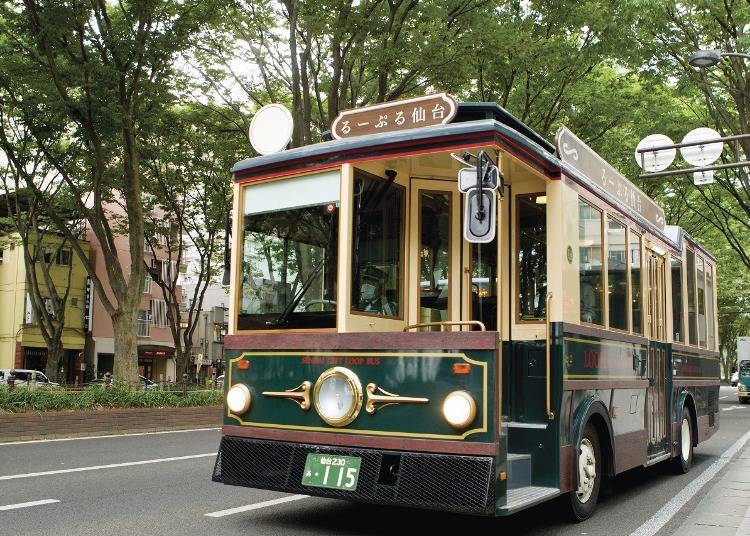 As the 6 spots we’ll introduce are dotted throughout Sendai City, we recommend getting around via the bus or subway system. For a stress-free journey without getting lost, try the Sendai Loople sightseeing bus, which circles 15 attractions throughout the city.

One ride is 260 yen and a 1-day unlimited ticket is 630 yen. If you’re planning to visit three or more spots, we recommend the latter. 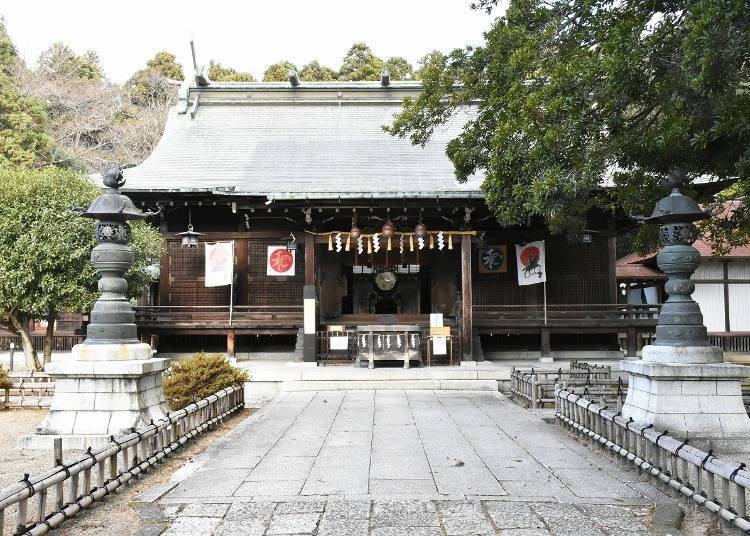 You can get to Aoba Shrine by taking the Senzan Line from Sendai Station and getting off at Kita-Sendai Station after 10 minutes. Walk an extra 10 minutes to find the shrine. Unfortunately, the Loople sightseeing bus doesn't service Aoba Shrine, so do be aware before going.

Completed in 1927, Aoba Shrine was constructed on the Date family temple's grounds. A tranquil, idyllic spot, it was said that Masamune himself would visit these northern hills to write poems and unwind. 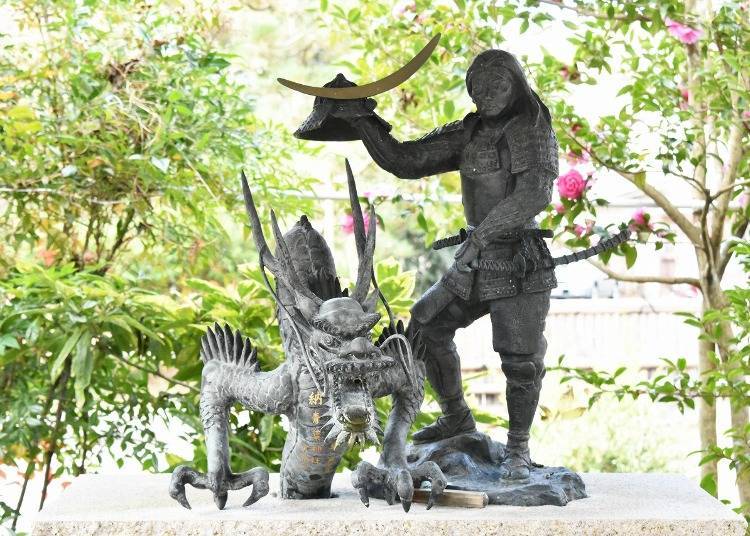 The shrine grounds brim with fascinating details! Most notable is the front temple entrance, which was constructed to enshrine Masamune, along with the family shrine.

Another eye-catching highlight, located in front of the basin to purify your hands before praying, is the striking statue of Masamune with a dragon.

While statues of dragons are found all throughout shrines in Japan, one accompanying such a legend is a true treat for history fans! 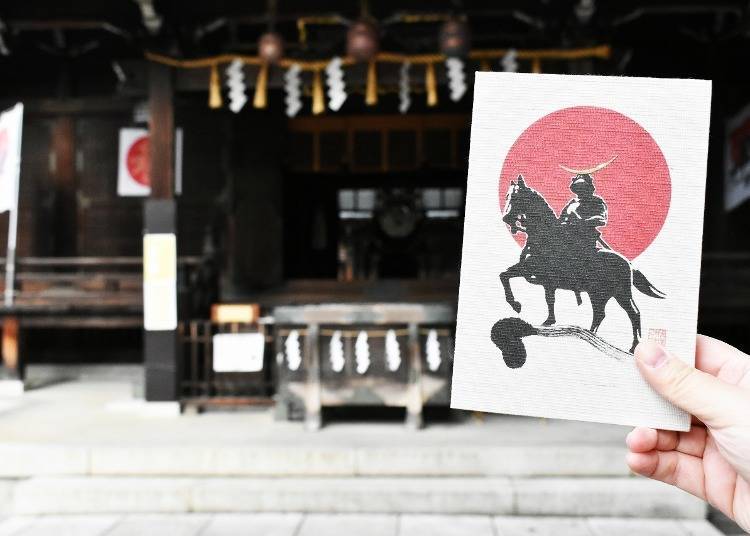 Once you've put your hands together in a little prayer, make your way to the shrine counter to purchase charms and fortune slips, along with plenty of fancy ema and swanky stickers featuring Masamune himself. If you have one, you can get your goshuin shrine book stamped for a contribution of 300 yen. If you don't own a stamp book yet, you can get a very elegant one here for 2,500 yen. 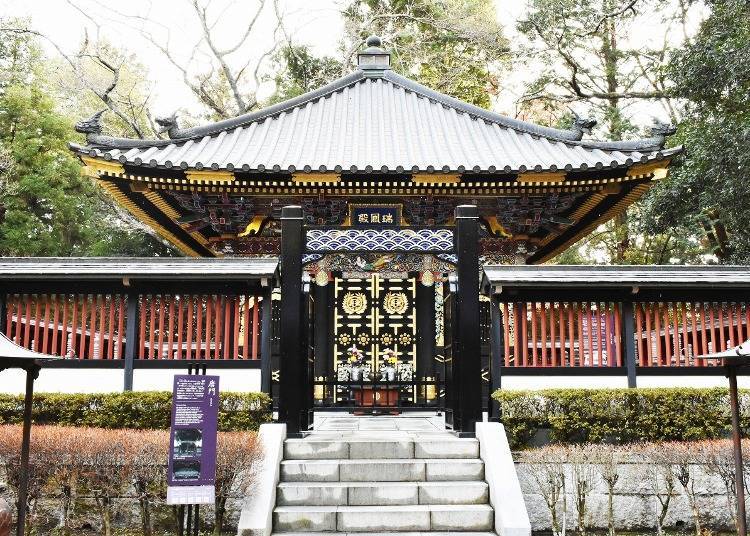 The Kyogamine Date-ke Bosho is the mausoleum and tomb for the family of the Sendai Domain. Aside from the famous Zuihōden Temple, the grounds boast numerous sights, including an exhibition hall displaying excavated historical materials and a fancy museum shop.

You can get here in 13 minutes on the Loople sightseeing bus by getting off at Zuihōden-mae and walking 5 minutes down the shrine road. If you're taking the municipal bus, get on the bus heading to Yagiyama-Dobutsuen Station from the JR Aoba-doori Station bus terminal. After roughly a 10-minute ride, get off at Otamayabashi Zuihōden Iriguchi and walk around 7 minutes. 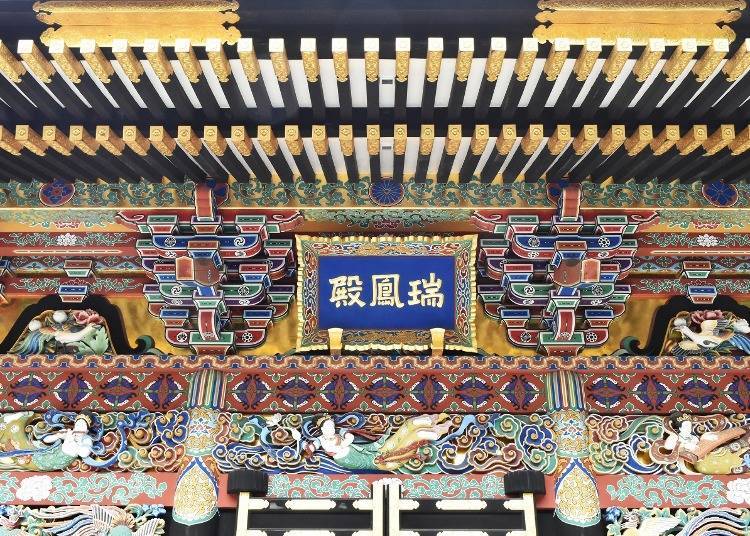 The mausoleum where Date Masamune rests is Zuihōden Temple, which is noted for its black lacquer (the same used to make Masamune's iconic helmet) and super-colorful ornaments. 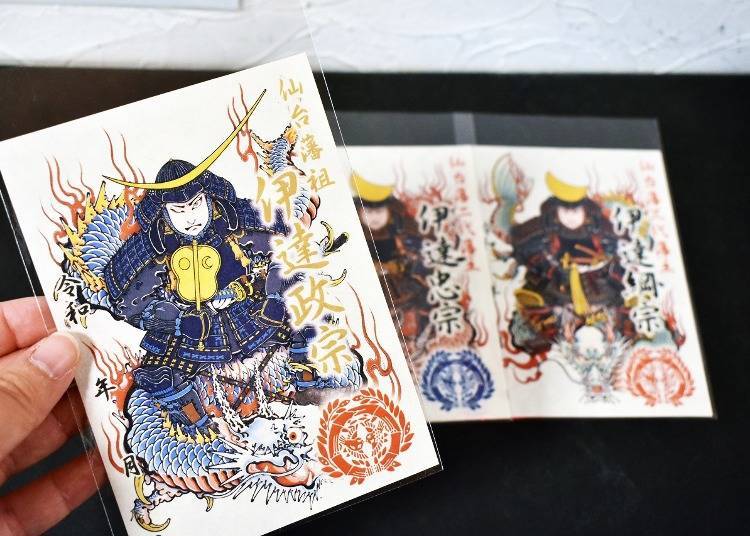 At the museum shop next to the entrance are loads of souvenirs based around the iconic Masamune and Date clan family crests.

One popular choice is the tanzaku bookmark, which is stamped with the family seal (660 yen). You can also pick up cool Warring States generals cards featuring stylish interpretations of Date Masamune, Tadamune, and Tsunamune (300 yen each). 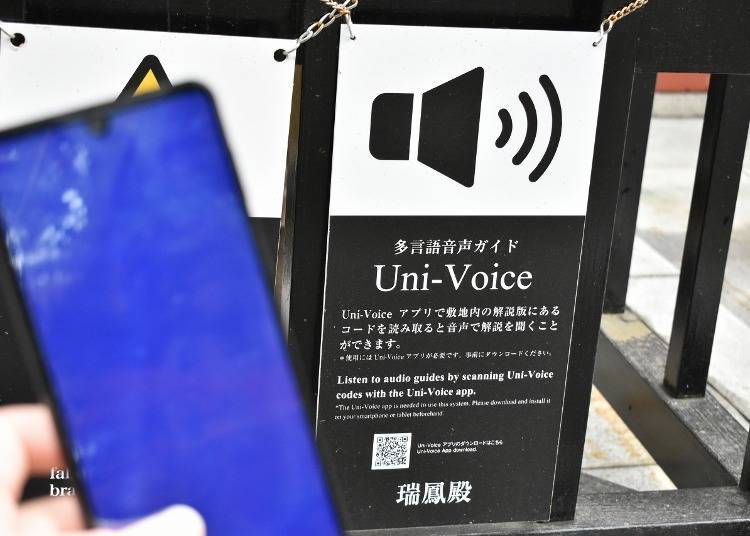 Inside the grounds are information boards with barcodes for the multi-language voice guidance Uni-Voice app. Download the app onto your smartphone and scan the barcode to listen to translated guidance in 5 different languages, including English, Chinese, and Thai. 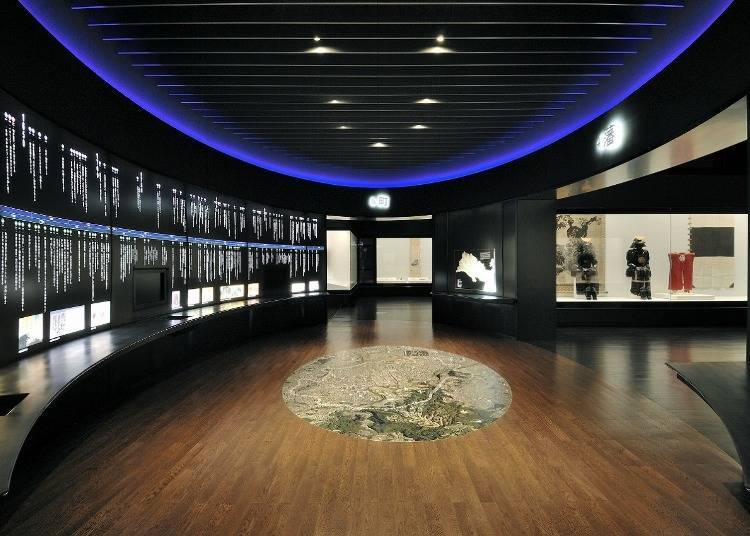 Packed with cultural treasures relating to the life of Masamune and other local legends, the museum boasts approximately 98,000 artifacts. This includes Masamune's armor, clothes, and other items he used throughout his life. Thankfully, the information is presented in English, so you won't miss any of the tantalizing historical details!

The Sendai City Museum is an 8-minute walk from International Center Station on the Sendai City Subway-Tozai Line, or a 20-minute ride on the Loople sightseeing bus from JR Sendai Station. 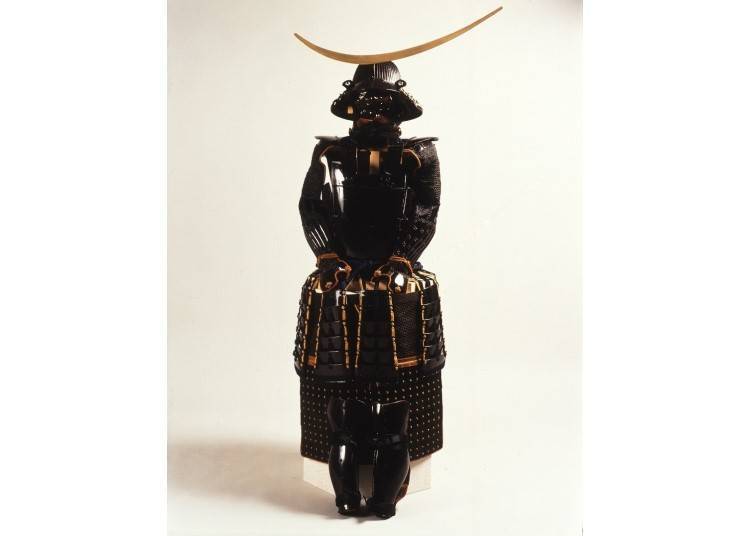 The museum's permanent exhibition features Masamune's writings along with illustrations of ancient Sendai. The current highlight of the limited exhibition is Masamune's beloved 'black lacquer 5-piece cuirass armor,' which is truly a unique specimen.

With glossy black lacquer paint combined with the crescent-shaped crest on the helmet, it stands out even today! Expertly coated with iron plating, this extremely sturdy armor was said to be able to withstand bullets! 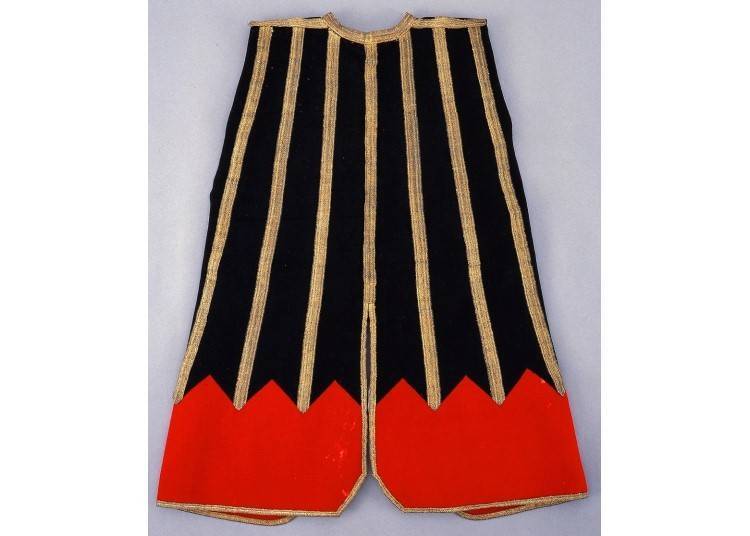 Another must-see item is Masamune's battle surcoat, which is modeled upon Western-style fashion popular at the time and features a vivid red mountain pattern at the hemline. Masamune, who is said to be an expert at consolidating power and self-promotion, likely wore these eye-catching clothes to intimidate foes and stick in the minds of allies.

*Depending upon the time of year, some exhibitions may be closed or replaced with replicas.

The following COVID-19 measures are in place:
All facilities are regularly disinfected and cleaned. Disinfectant spray is provided. Store and facilities are regularly ventilated. Coin trays and partition boards are in use. Staff wear masks and/or gloves, wash hands, disinfect, gargle, and check temperatures. Store capacity is limited and seat spacing has been rearranged. Limited entrance, reservation system in place (depending upon the situation). Customers are required to wear masks and undergo temperature checks.

4. The Ruins of Sendai Castle – Stunning Panoramas of the Entire City! 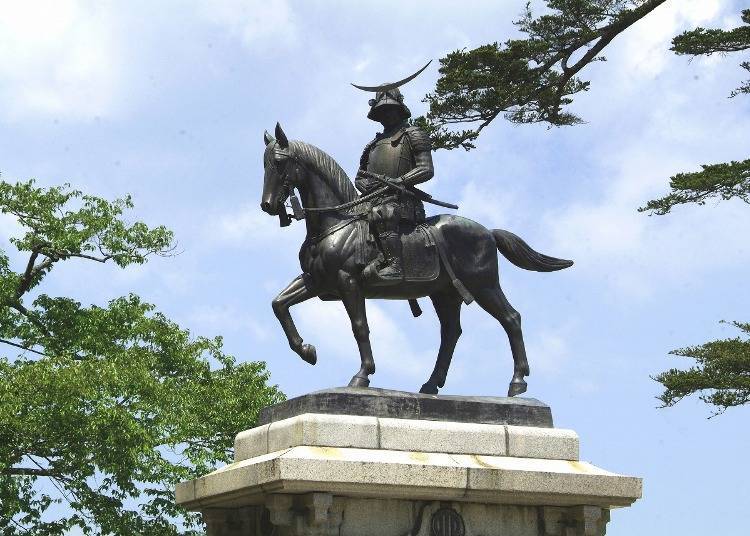 The Sendai Castle Ruins sit upon Mt. Aoba and tower over Sendai City. Known for the iconic statue of Date Masamune riding his horse, these fascinating grounds are adored by locals and tourists alike.

You can get to the Sendai Castle Ruins on the Sendai City Subway-Tozai Line from JR Sendai Station. After disembarking at International Center Station, the ruins are a further 20-minute walk. The walk from the subway station is quite steep, so if you'd rather not tire yourself out, you can also take the Loople sightseeing bus straight there in roughly 23 minutes from JR Sendai Station. 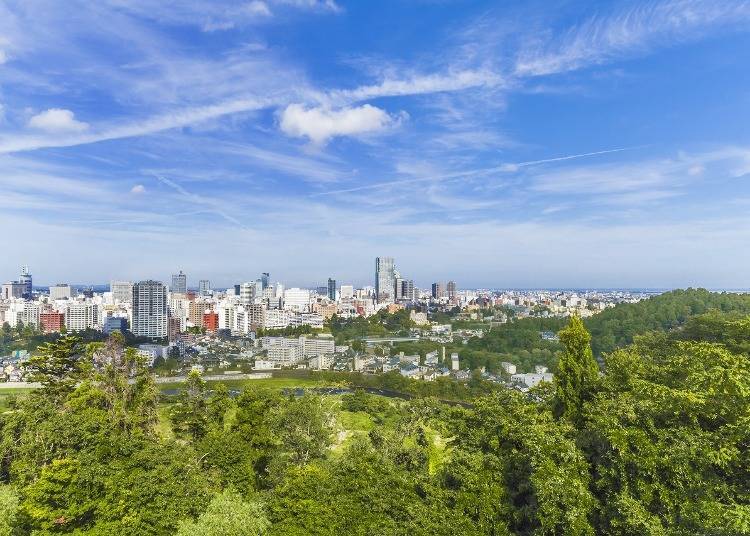 Sendai Castle was originally the domain of Date Masamune. The symbol of Japanese military commanders, castles were a vital part of ancient Japanese rule.

Sendai Castle was believed to have consisted of the central honmaru building, which included Masamune's private quarters and guest spaces, surrounded by the subsequent ninomaru and sannomaru complexes.

As Sendai Castle lacked a castle tower, it boasted a very unusual design. While the entire castle was lost to fire, the reconstructed watchtower and stone wall remains near the main gate, along with exhibitions in the Sendai Castle Information Center, provide a glimpse into how it may have appeared. 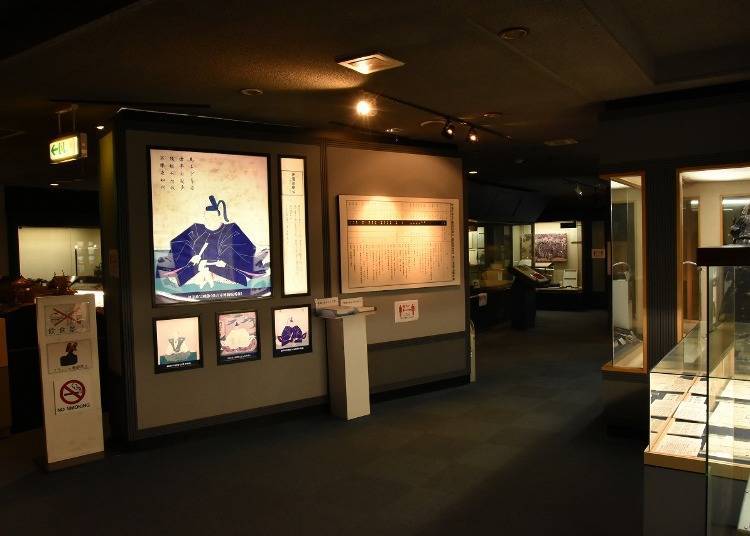 The Aoba Castle Museum, tucked inside the ruins of Sendai Castle, holds loads of fascinating historical gems - including the weapons and letters of Date Masamune!

Also inside is a theatre screening a CG recreation of Sendai Castle at its peak (approximately 16 minutes long), allowing insight into the true nature of the site. 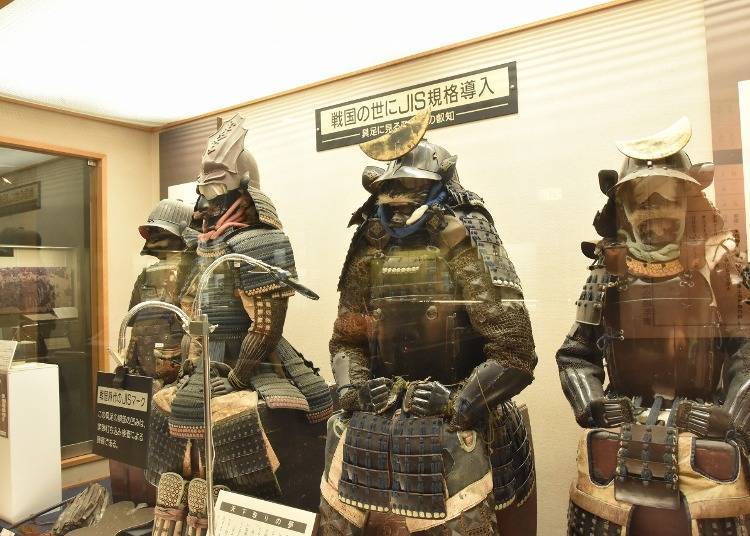 Included in the exhibition is the special 5-layer iron armor used by the Date clan, along with a selection of other armors commonly worn by commanders of the period. This contrasting display allows visitors to compare armors and truly comprehend just how unique the Date style was.

Despite the armor being behind glass, it's close enough to observe small dints from gunshots used to test the strength of the armor – a raw glimpse into the harsh conditions of the era! 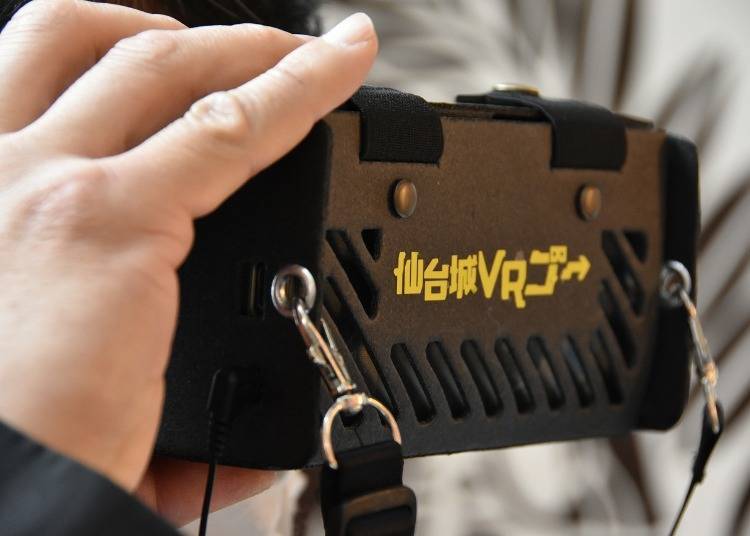 If you want to step further into Sendai Castle's magnificent history, the 'Sendai Castle VR GO' experience provides history-buffs with a guided virtual walk through the castle at its prime.

With a 360° field of vision, every minuscule detail of Sendai Castle is painstakingly rendered before you on the castle's original plot. This is as close to time travel as you can get! 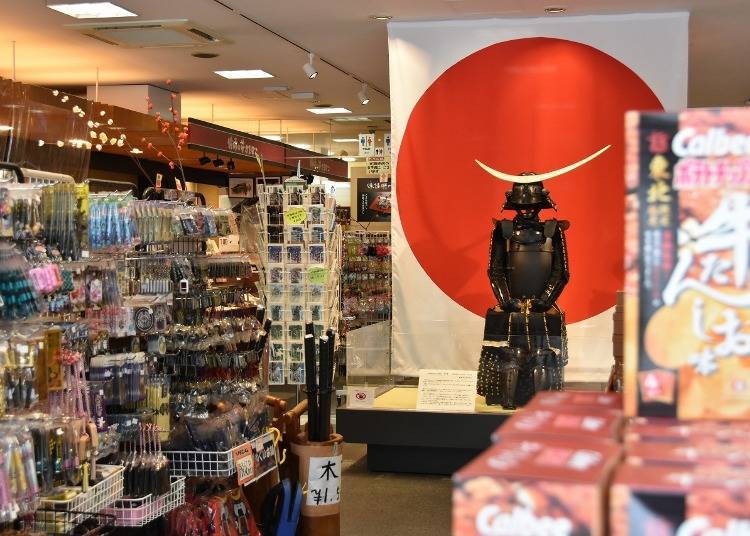 The VR experience needs to be booked in advance, so make sure you confirm before visiting! It can be found on the 1st floor Lower Aoba Castle Meihinkan section of the museum.

On the same floor are loads of local treats, including roasted gyutan beef tongue, green soybean mochi, kamaboko fish cakes, and more! Of course, you can find ample Date Masamune merchandise along with castle stamps to commemorate your visit.

The following COVID-19 measures are in place:
All facilities are regularly disinfected and cleaned. Disinfectant spray is provided. Space is cleaned after each customer. Building is regularly ventilated. Coin trays and partition boards are in use. Staff wear masks, wash hands, disinfect, gargle, and check temperatures. Store capacity is limited and seat spacing has been rearranged. Limited entrance, reservation system in place (depending upon the situation). Customers are required to wear masks and undergo temperature checks. 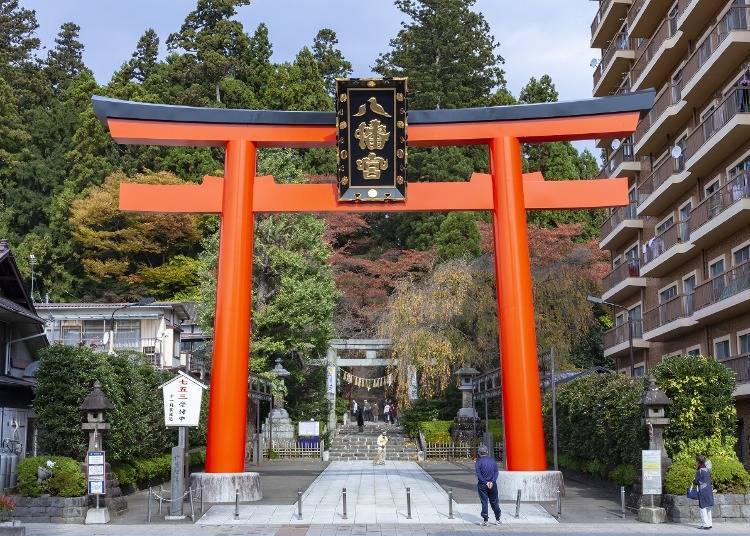 Officially designated a National Treasure of Japan, the final addition to our tour is Osaki Hachiman-gu Shrine.

You can get here via a roughly 40-minute journey on the Loople sightseeing bus, or with a 22-minute ride on the municipal bus heading to Sanezawa Eigyosho-mae from Aoba-doori Station and getting off at Kunimi Ni-chome. 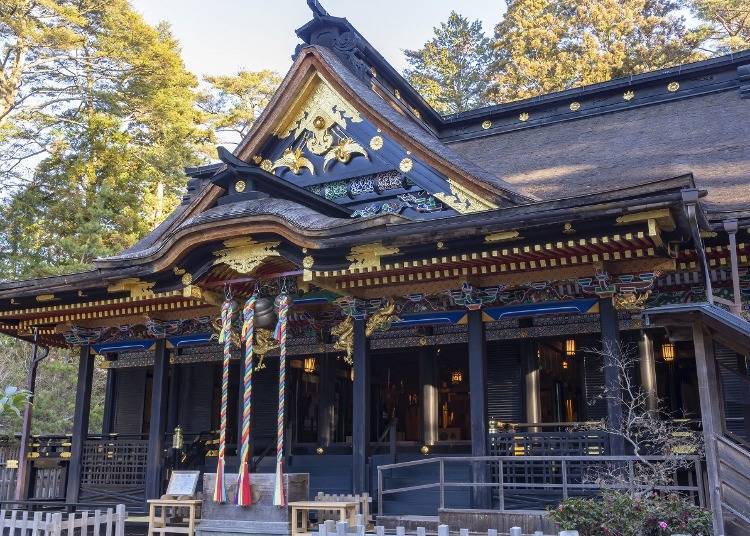 Constructed in 1607, Osaki Hachiman-gu is Sendai's protective shrine. It is believed to have been built or run by Date Masamune, allowing visitors to feel the intensity of his faith through the grandeur of its design.

The main shrine and worship hall, along with the stone room connecting the two, are the oldest structures built in the gongen-zukuri style of Shinto architecture. 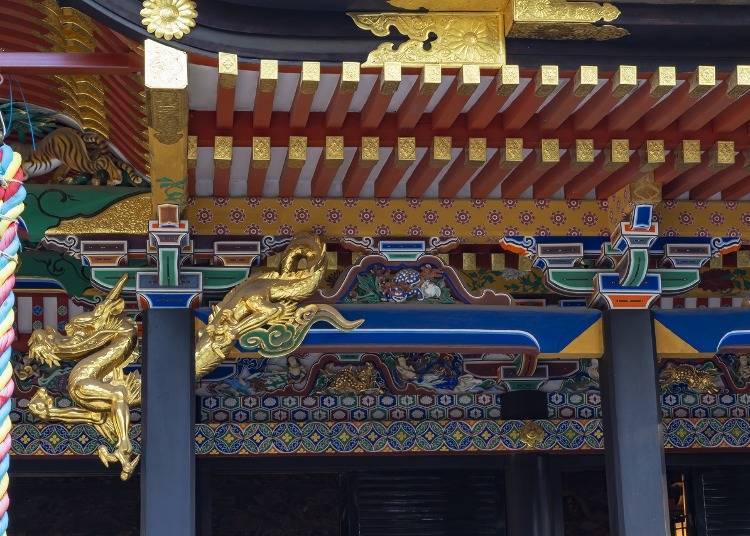 The highlight is the colorful decorations adorning the black lacquer-coated main shrine. With mythical creatures such as phoenixes, kirin, and dragons accompanied by cranes, deer, plants, flowers, and more, the skill behind this stunning craftsmanship shrines through the ages. Take a good, long look and see how many details you can spot!

Pamphlets in English, Chinese, Korean, and German are available.

Truly, there's no better way to appreciate the grandeur of history than in following the footsteps of legends. Date Masamune is one of Japan's most influential and famous figures, and a household name across Sendai. If you're looking for fresh Japan travel inspiration, head to Sendai and walk the path of a famed samurai ruler!

* The information in this article is as of January 2021. Please check the official website for the latest information.

Date Masamune: Discovering the Mysteries of Sendai's “One-Eyed Dragon”
Best Things to Do in Sendai: Sightseeing, Attractions, Food and More!
*This information is from the time of this article's publication.
*Prices and options mentioned are subject to change.
*Unless stated otherwise, all prices include tax.