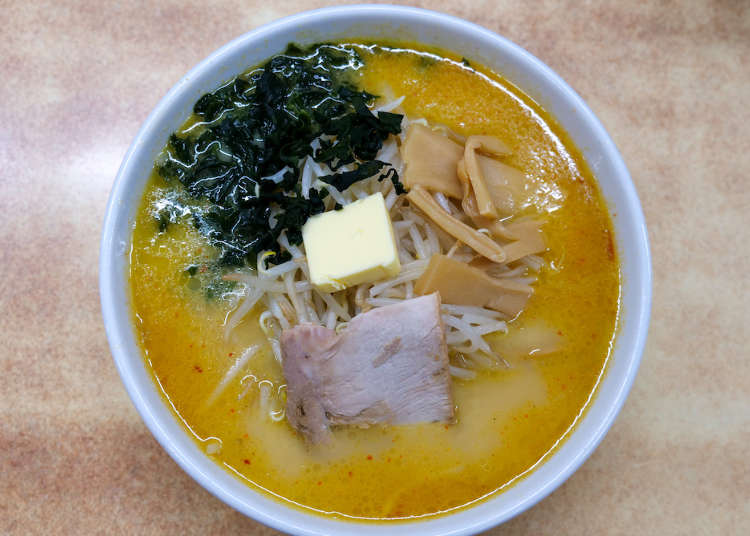 Aomori ramen, is the slurp of dreams. As the number one consumer of cup ramen in Japan, Aomori loves ramen! The city teems with hole-in-the-wall ramen spots lining the streets.

In particular, the three major cities of Hirosaki, Aomori, and Hachinohe have many shops that have continued to run for many years, as well as uniquely flavored ramens shops. There are different ramen cultures in different areas of Aomori Prefecture.

Here, we’ll be introducing three of the top Aomori ramen that you have to eat when you’re in the prefecture.

What are the ramen of the three big cities in Aomori Prefecture?

Aomori Prefecture has many types and varieties of ramen available, and amongst these, the three main types are Tsugaru ramen, Hachinohe ramen, and miso curry milk ramen.

Tsugaru ramen originated from Hirosaki city in the Tsugaru region and has a sardine-based soup. There are two types available, one where you can taste a light shoyu based soup and a thick soup made of pork bones, chicken bones, and dried sardines. Meanwhile, Hachinohe ramen’s unique point is its light shoyu based soup paired with thin noodles and is a flavor that is near and dear to the city since long ago.

And then there’s miso curry milk ramen, Aomori’s soul food, and as its name implies, it’s a ramen made of a mixture of miso, milk, and curry. Its flavor is so unique and full of character that it can’t be put into simple words, and we’ll explain it as we introduce shops that specialize in it. 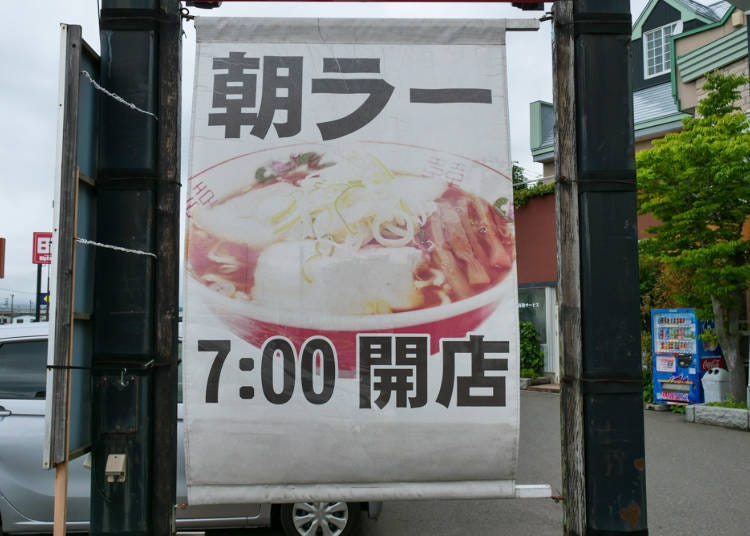 In Aomori, the culture of eating ramen in the morning is called “asara” 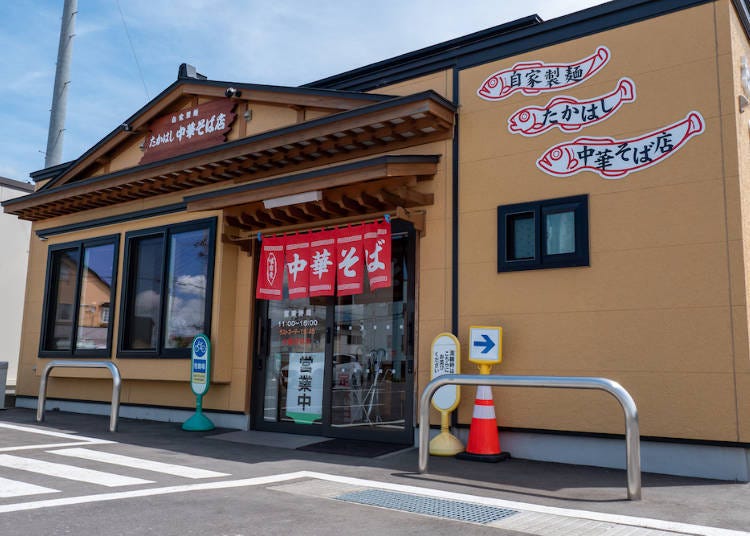 The first Aomori ramen shop we’ll be introducing is “Takahashi Chukasoba,” situated in Hirosaki city in the southern part of Aomori Prefecture. The restaurant first opened its doors in 1982 and is well known as the “holy ground” of Tsugaru ramen.

It’s popular not just with the locals, but has fans from all over the country as well. When lunchtime arrives, you’ll see queues start to form, as the smell of dried sardines gently wafts over you. 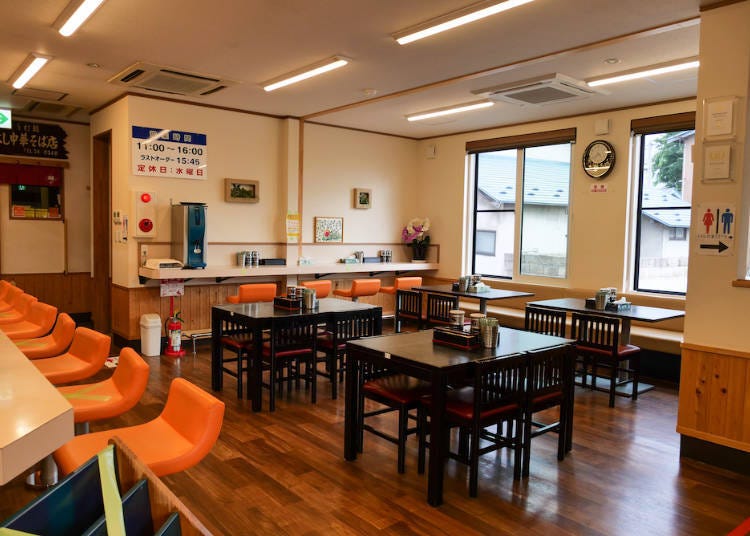 The shop interior is wide and spacious. Alcohol disinfectants are placed throughout the shop, and alternate seats are left empty at the counter to prevent the spread of Covid-19.

The shop’s most unique point is its soup, which is so thick that you can’t even see the noodles. Using large amounts of high-quality dried sardines, it’s boiled together with pork and chicken bones and kombu seaweed for around four to five hours, to get a soup that spreads the thick richness of the sardines the moment it passes your lips, followed by a refreshing after taste, for a very unique flavor profile indeed. 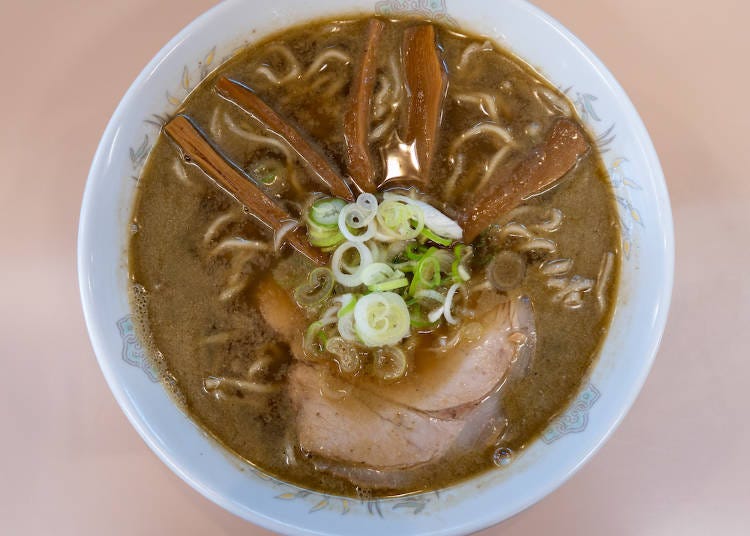 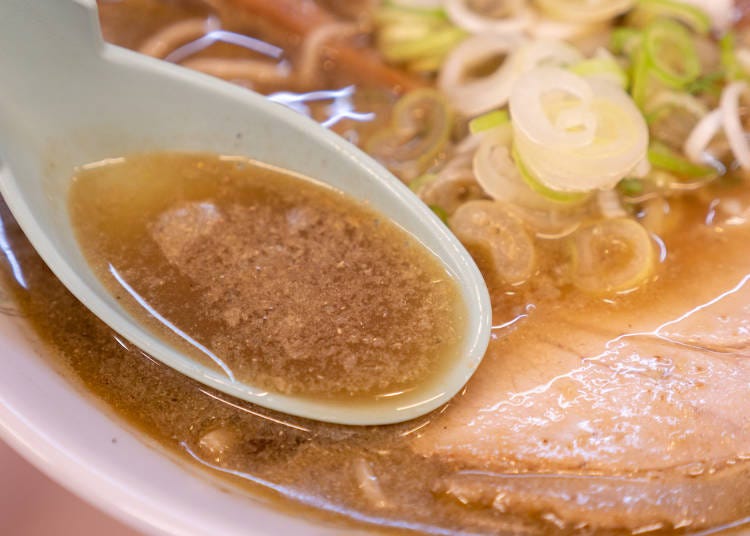 Soup with powder from the dried sardines used to make it

The thick and curly noodles are made in house, and its springiness makes it a delight to eat. As you slurp the noodles together with the soup, the fragrance of the dried sardine spreads throughout your mouth. The rich taste of the bamboo shoots and roast chashū pork are accented by the crunchy and refreshing leeks. 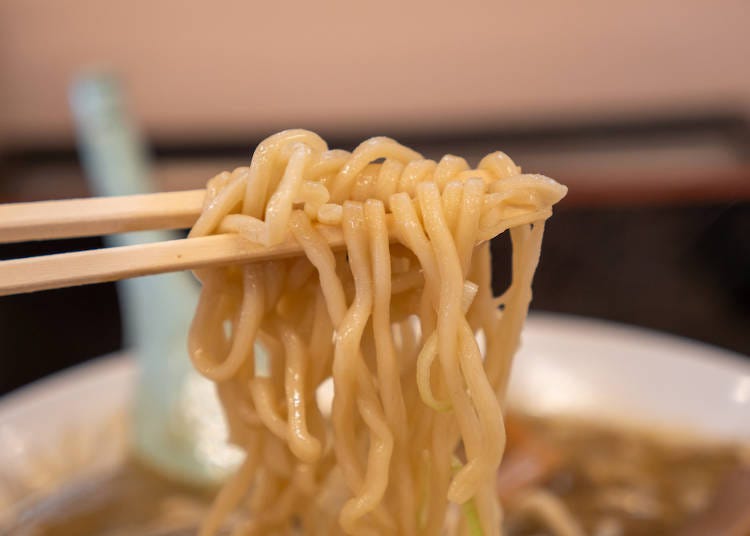 The rich and smooth tasting soup with its refreshing aftertaste is an unexpected combination, which is achieved by controlling the heat on the soup while boiling until it becomes like miso soup. Over twenty years of hard work went into achieving the current taste, and people from far and wide who come for it sing its praises too. 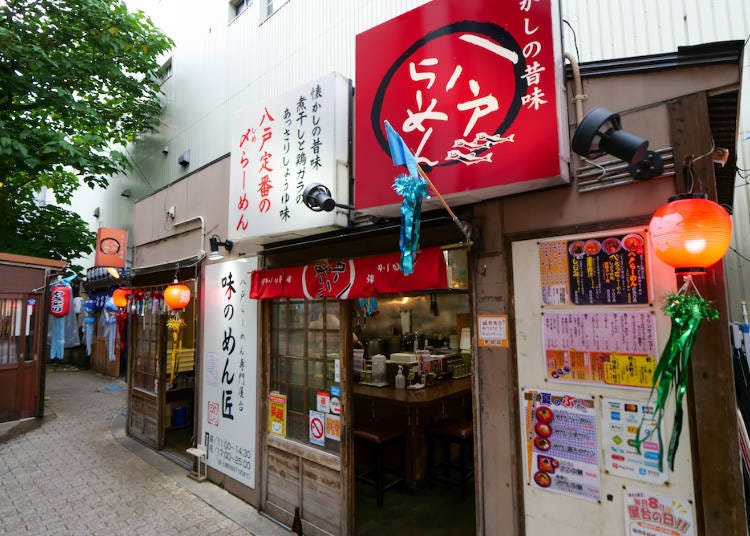 Moving on, we’ll be telling you more about a famous Aomori ramen shop which sells Hachinohe ramen in Hachinohe city, in the eastern part of the prefecture.

In Miroku Yokochō, home to small food stalls and eateries, is “Aji-no-men Sho,” a shop specializing in Hachinohe ramen, and many locals and visitors flock here to get a taste of its nostalgic flavor. English and Chinese menus are available as well, making it easy for foreign visitors to place their orders. 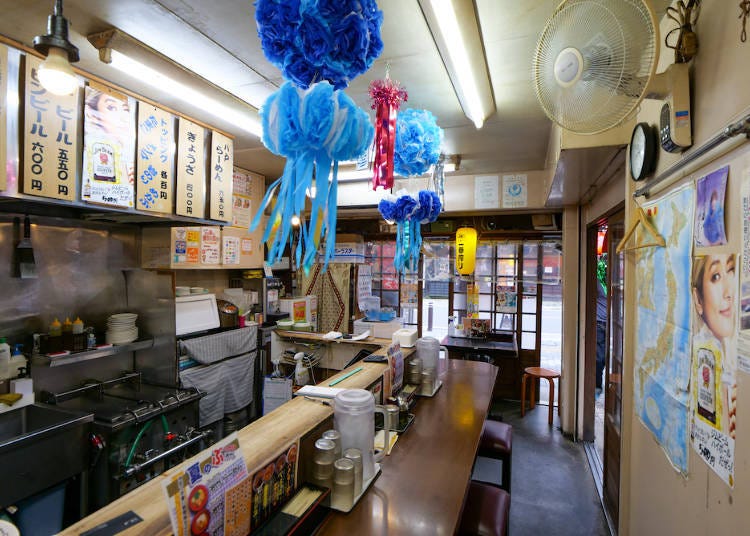 The shop is ventilated regularly, and counter seats are placed further apart to prevent the spread of Covid-19

The signature Hachinohe ramen uses mainly dried sardines and chicken bones to create a light shoyu soup base, with the sardines produced in Hachinohe, and the chickens being a local breed in Aomori Prefecture, the Aomori Shamrock. The refreshing and straightforward shoyu soup has a gentle taste. It is easy to drink, and you can fully enjoy the taste of the sardine and chicken too. 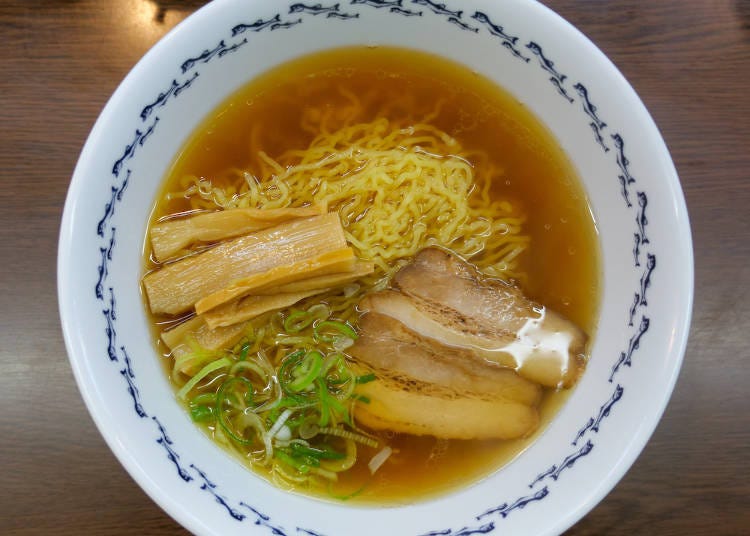 The most popular menu item, the Hachinohe ramen at 650 yen (with tax) 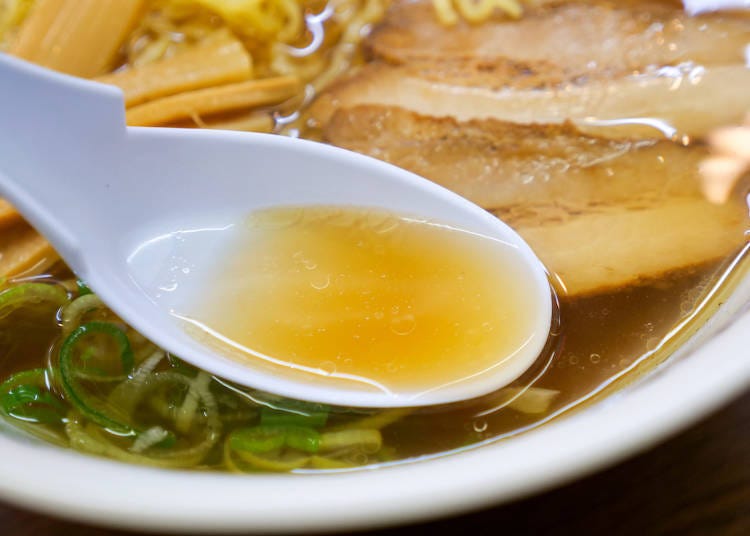 The light brown soup has a gentle taste.

The thin and curly noodles are an excellent match for the soup, and smooth texture makes it easy to slurp. The noodle is also springy, a trait of Hachinohe ramen that has remained unchanged since times begone. 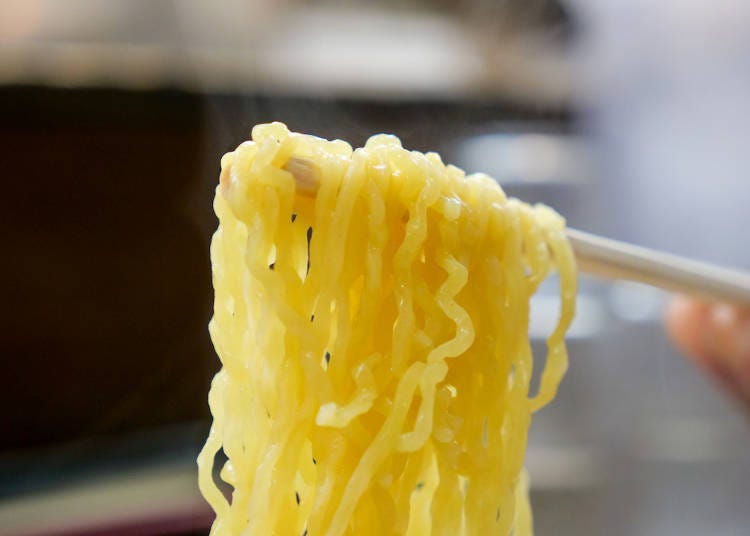 Thin and curly noodles remain unchanged since long ago

Hachinohe ramen seems to have been first created in 1923, using Chinese soba noodles from Tokyo. As the dish adapted to the taste of the residents of Hachinohe City, many customers drop by for a bowl of ramen after drinking parties, before heading home. Aji-no-men Sho, popular be it for lunch or supper. Please give this nostalgic flavor well-loved by the locals a try. 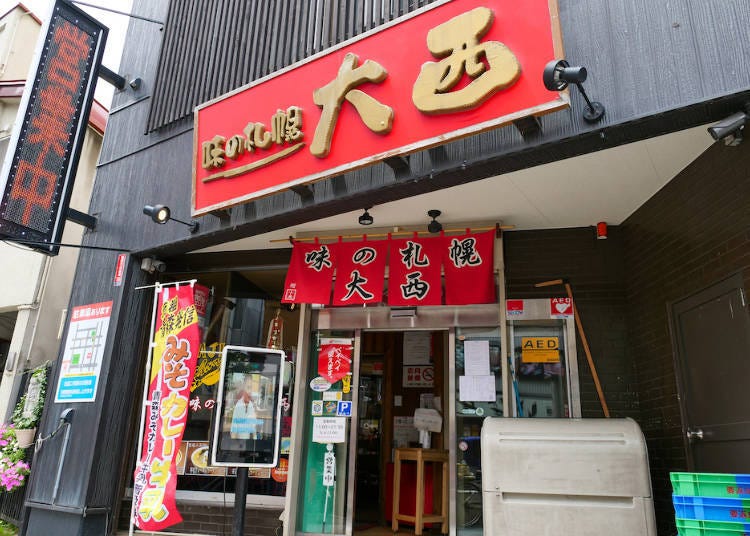 The shop has appeared frequently on local media. “Ōnishi” is the owner’s name.

Last but not least, eight minutes away from Aomori station by foot is “Aji-no-Sapporo Ōnishi.” Known as the creator of Aomori’s soul food, miso curry milk ramen, it’s so popular that 80 percent of its customers order the same item.

Incidentally, the “Sapporo” in the shop name refers to the shop’s origins in Hokkaido’s Sapporo Ramen Yokochō. To spread the word of its famous miso ramen, it set up shop in Aomori, and has continued its business like this since. 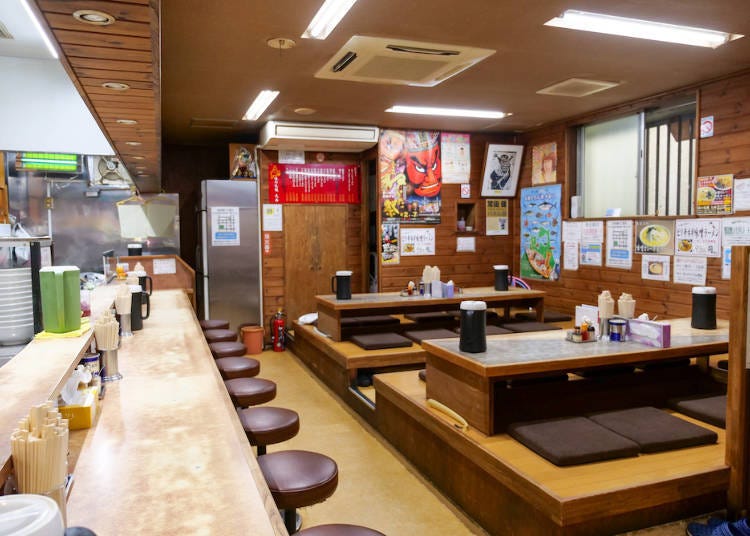 The shop has raised Japanese style seats, and counter seats. Ventilation and humidification, along with alcohol disinfection, are currently in place to prevent the spread of Covid-19

While waiting for the delicious Aomori ramen to arrive, we spoke to the owner Ōnishi to find out more about the creation of miso curry milk ramen.

Several years after the shop first opened in the 1970s, the high schoolers who frequented the shop would add ketchup and mayonnaise, amongst other toppings, to their ramen to make it more filling, and mix it all up before slurping it all down. Out of the added ingredients, based on feedback, miso, curry, and milk resulted in a delicious combination, and it was added to the menu as a regular item. Though it may come as a surprise that Aomori’s soul food has such an accidental origin, we can only wait in anticipation to taste it for ourselves. 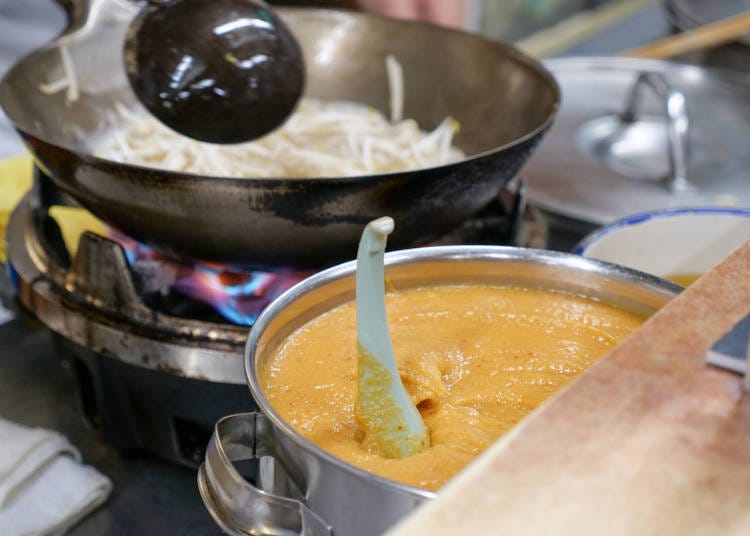 In the kitchen, homemade miso and milk, and curry powder, are lined up 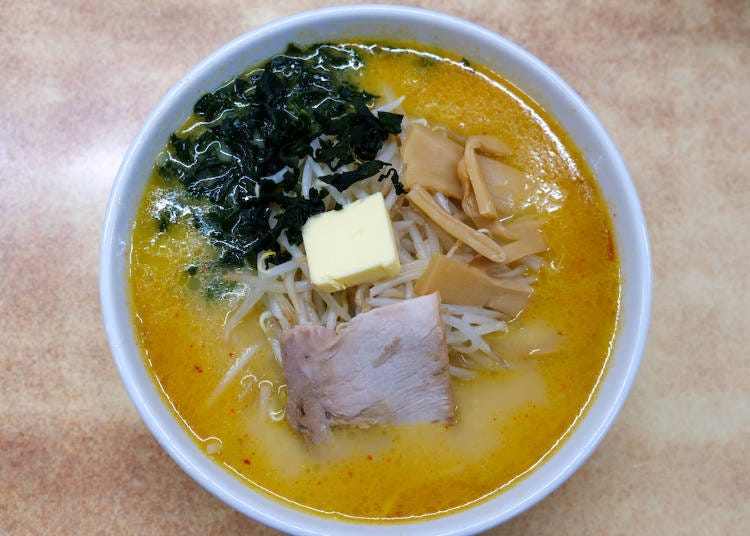 Miso curry milk ramen with butter, at 880 yen (with tax)

First, we tried the soup, and it was surprisingly mild. The soup is made with a base of pork and chicken bones. You can taste the lightness of the miso and the smell of the curry, and combined with the milk from Aomori Prefecture, the flavor is well put together. Contrary to expectations, the milk did not stand out too much, and the combination of the ingredients matched the soup perfectly. 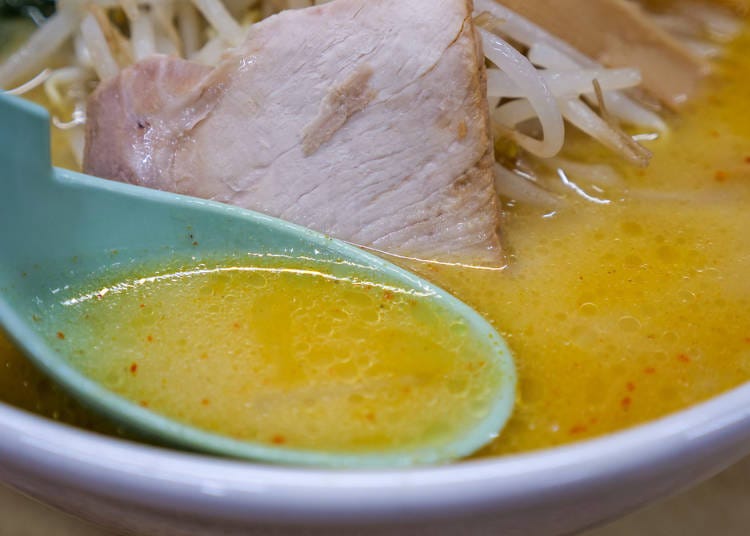 The thickness of the miso curry milk soup condenses together

The noodles are purchased from a noodle maker in Aomori City, and the egg-yellow noodles are thick and curly, with a strong and springy texture that’s very flavorful. It catches the soup well, and the thick springiness of the noodles makes them easy to eat and leaves you wanting more. 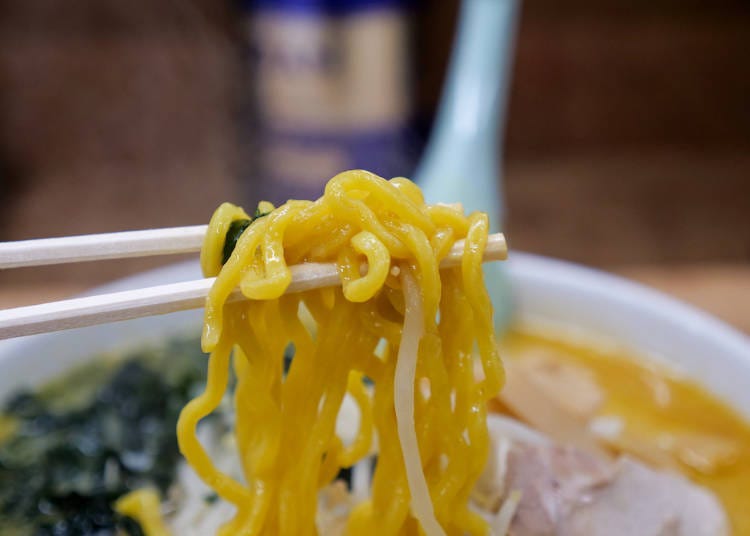 The thick and curly noodles complement the soup

After eating for a bit, you should try melting the butter into the soup before continuing. The light saltiness results in a thicker soup, allowing you to enjoy the noodles and toppings with a different flavor. 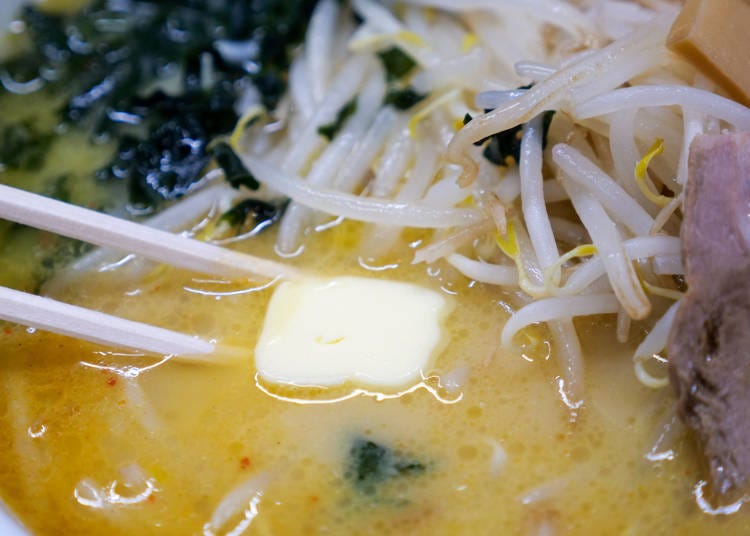 The representative cuisine of Aomori, Tsugaru ramen, Hachinohe ramen, and miso curry milk ramen. With so many different types of Aomori ramen, you can only get their full flavor at their place of origin, do enjoy these dishes when you’re in Aomori Prefecture!

Text by: Tsubasa Shimoda
Information current as of July 2020.

Tsurukameya Shokudo: Try These Maguro-don Tuna Bowls Once & You'll Never Forget!
Aomori Bucket List: 10 Things to Do in Aomori, Japan's Popular Northern Nature Paradise!
*This information is from the time of this article's publication.
*Prices and options mentioned are subject to change.
*Unless stated otherwise, all prices include tax.