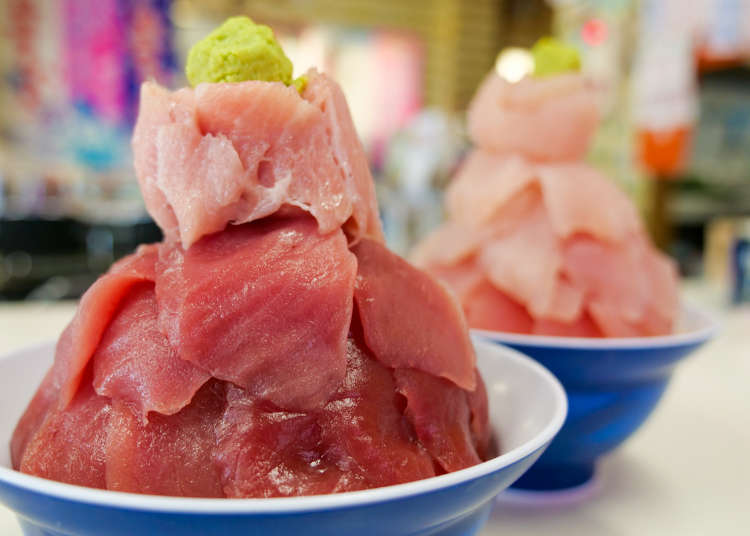 Maguro-don, or tuna rice bowls, are a fun way to try sushi in a completely different way. Rather than having a bit of sushi on rice, you can get a generous heap of fresh sliced fish over steaming white rice. And one of the best places for this just might be in Japan's north - in Aomori Prefecture.

With access to four seas, namely the Sea of Japan, the Pacific Ocean, the Tsugaru Straits, and the Rikuoku Gulf, Aomori Prefecture produces an abundance of seafood, including scallops, squid, and flounder, and the “black diamond” of tuna, the luxurious Pacific bluefin tuna.

For the people who want to eat Aomori’s maguro, or bluefin tuna, but are unable to spare the long traveling time needed to reach the ports or are unable to make it when it’s in season, we’re here to introduce to you the mega maguro-don tuna bowls at one of Aomori City's most popular shops: Tsurukameya Shokudo. 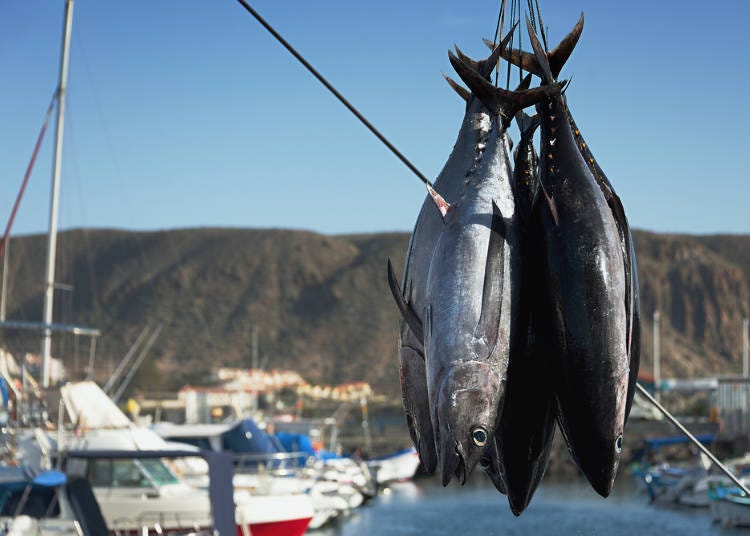 Tuna can be caught all over the world, but why is the tuna from Aomori of exceptionally high quality? This has to do with the ocean and environment that the tunas grow up in.

In colder waters, the tunas grow to have firm bodies with ample fat reserves, resulting in exquisite taste and texture.

One brand of bluefin tuna, the Ōma-maguro, which is still fished with single-lined rods, is famous worldwide.

This brand of tuna also made headlines when it netted 300 million yen during the Hatsuzeri, the first fish market auction of the New Year. 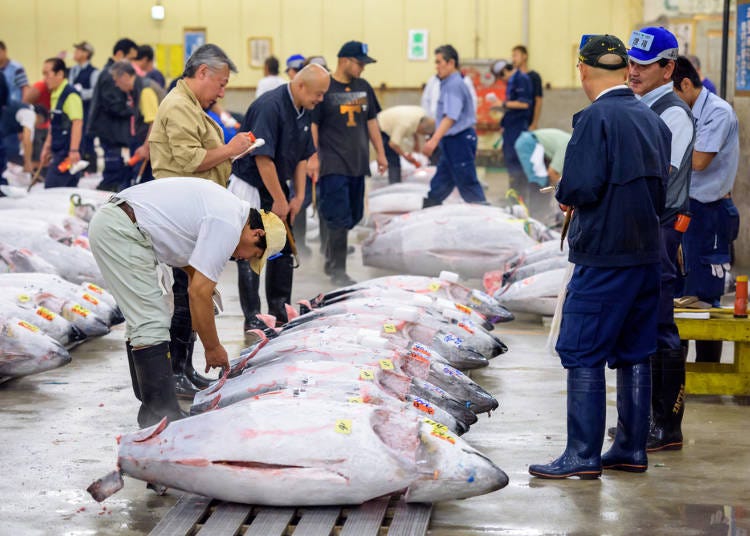 If you plan to visit Aomori City to have a taste of tuna, the fishing season for maguro is typically from July to December, and some shops may not carry it when it’s offseason.

Amongst these shops, there are rumors that there is one restaurant where you can have maguro-don the whole year round, and that’s Tsurukameya Shokudo in Aomori prefecture, where we’re heading to today. 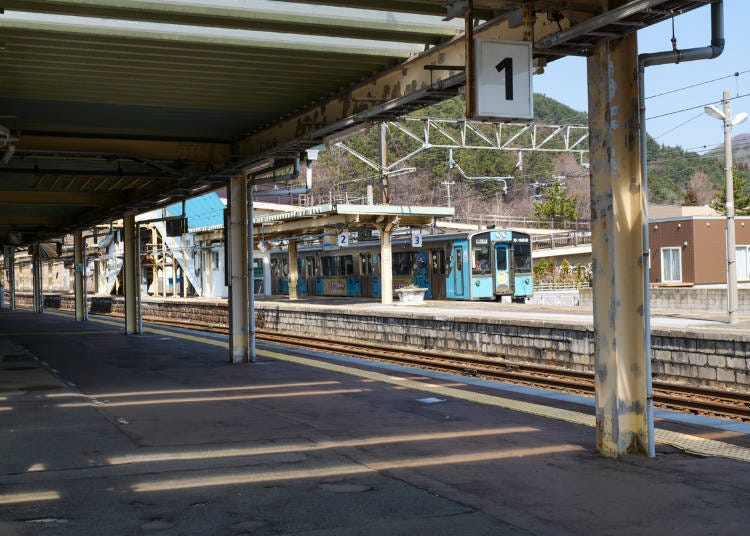 Twenty minutes away by train from Aomori Station on the Aoimori Railway, is Asamushi-Onsen Station, the closest station to Tsurukameya Shokudo, which is just five minutes away by foot.

Originally opened together with a ski lodge nearby, this eatery has a proud 80-year history, and is well-loved by the locals for its set meals. The place started serving maguro-don around ten years ago.

Initially just snapping up the occasional tuna that pops up in the markets of Aomori City, this restaurant used to serve all the tuna they procured in a single day until they were sold out, until they started procuring tuna in bulk.

And so, maguro-don gradually became one of the famous items on their menu. 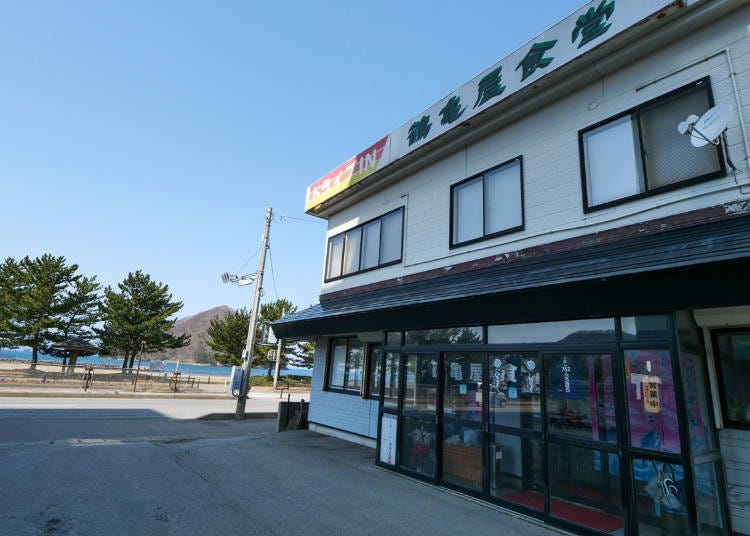 The spacious shop interior has a calm and soothing atmosphere, and it’s almost like stepping into a time slip in to Japan from 50 years ago. Once you peek into this retro-style shop, you’ll be surprised at the number of tuna related fittings decorating the inside. 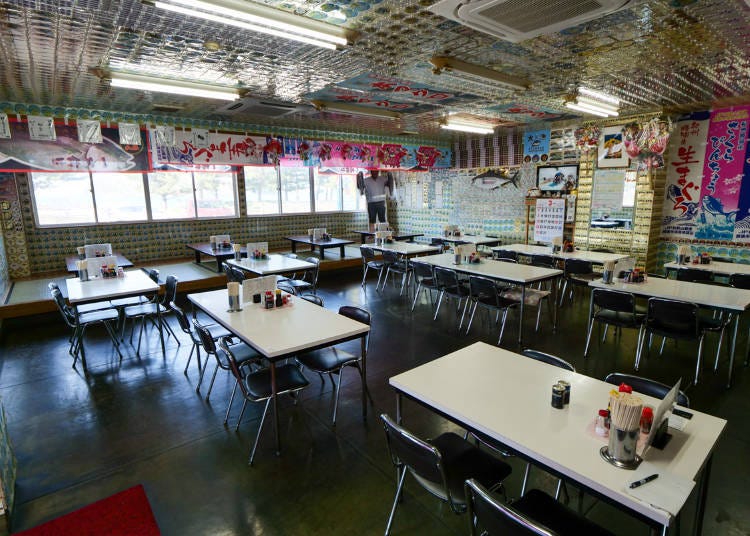 From the spacious shop interior, the sea is visible from the window 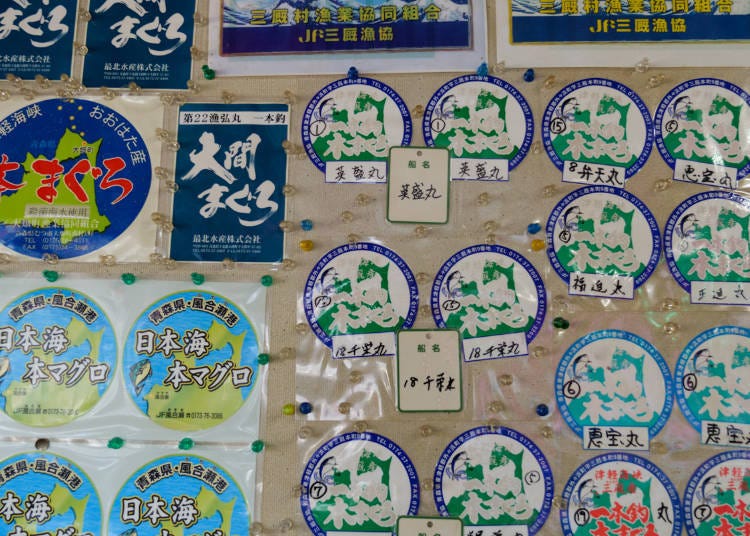 Stickers certifying the place of production of the tuna sold.

We immediately ordered their signature dish, the “Hon-maguro-don”. There are three sizes ranging from mini to small and medium, and for those who want to fill their bellies up, we recommend getting the medium. As we excitedly waited for our orders to arrive, we were greeted by this impressive maguro-don! 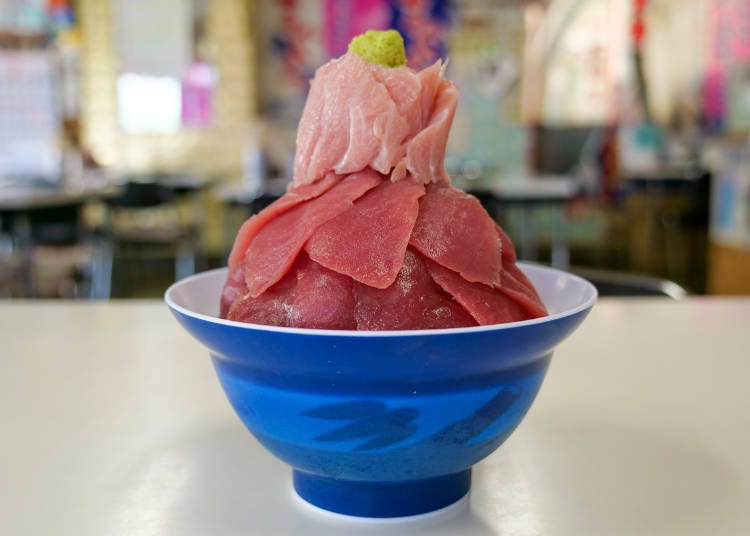 Topped with five to six slices of ōtoro, or fatty tuna, the rice bowl is piled high with numerous slices of hon-maguro, or red tuna, enough to completely hide the bed of rice the tuna sits on.

If you read the menu carefully, the medium-sized bowl supposedly has 20 slices of tuna on it, but no matter how we looked at the one we were served, the sheer volume clearly shows more than just 20 slices.

The silent bonus slices from the shop did not go unnoticed by us, and we quickly dug in with our hearts full of gratitude. 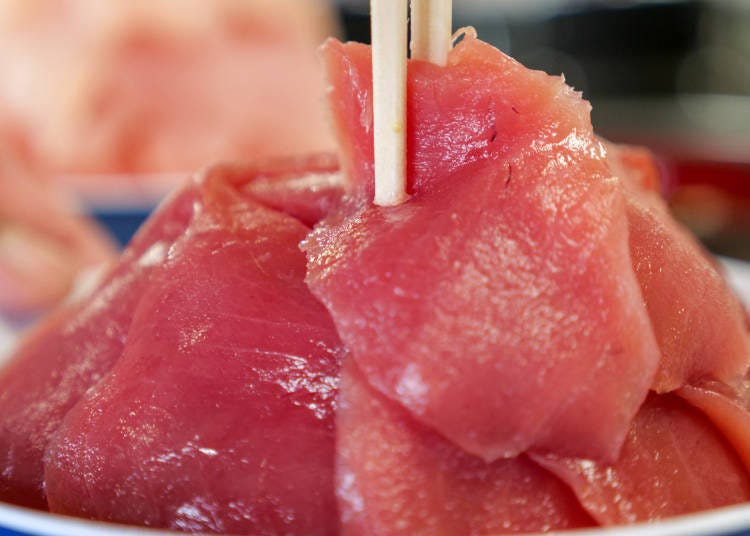 Even as we removed the tuna slice by slice, we still couldn’t see the rice

We were lost trying to figure out how best to start eating this rather imposing-looking feast, so we found out from the shop the best way to enjoy it.

If you start eating from the top of the mountain of tuna, the heat from the rice will start to warm up the tuna, and the soy sauce will begin to pool at the bottom of the bowl. Instead, you should move the tuna onto a small plate, before you start eating.

Once you’ve separated the fish slices from the rice, you can eat it like a sashimi set meal too. 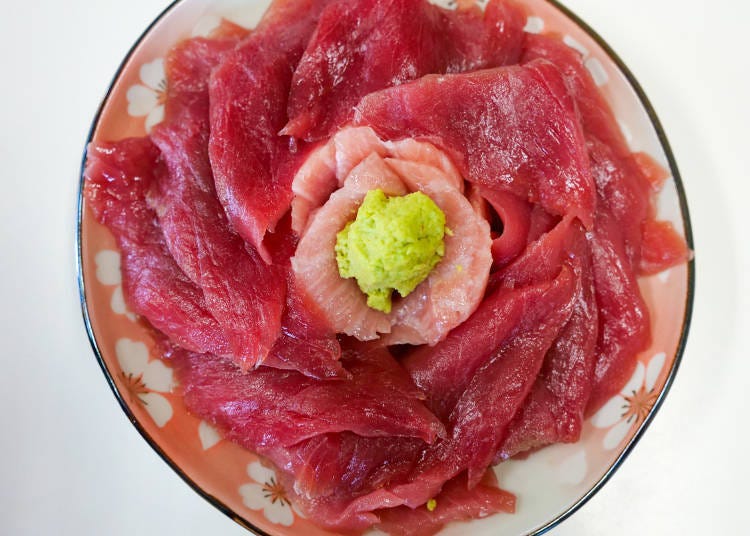 The contrast between the wasabi, hon-maguro, and ōtoro is beautiful

Once we’ve moved the fish slices onto another plate, we first devoured the ōtoro to savor the fattiness and umami of the tuna. It melts in your mouth!

As the fat spreads throughout your mouth, the sweetness of the tuna blooms, and eating it is almost like a dream.

Next, we had the thick slices of red tuna, savoring its light taste and thick texture. For soy sauce, we used konbu soy sauce from Ōma, which contains kelp, while the wasabi used is a custom-ordered type made from special powder and kneaded into shape.

All these contribute to the perfect flavor profile to savor the tuna, in its best and most delicious state. 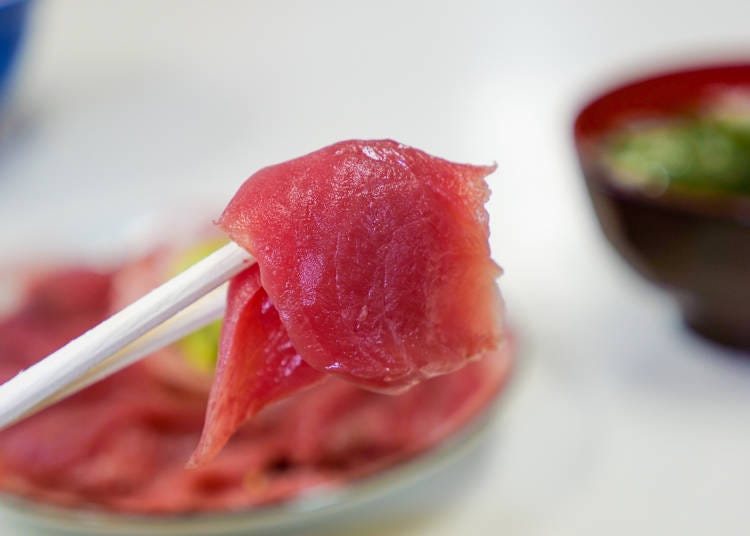 The red tuna is rich in umami and easily palatable, and you can’t stop no matter how much you’ve eaten 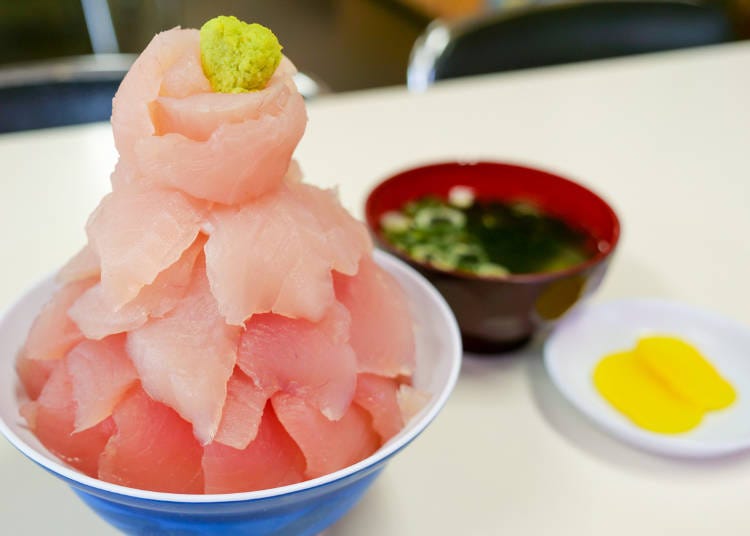 Served in a staggeringly large volume as well, the fish slices are the light pink color of cherry blossoms and look beautiful, with the color gradient gradually becoming richer towards the bottom of the bowl.

Once it hits your tongue, you’ll be surprised by how springy the flesh is, being firmer in texture than hon-maguro, with just the right amount of fat for a tasty and easy-to-eat delicacy.

Like the hon-maguro, it’s recommended to move the fish slices onto a plate before you start eating, to enjoy the most of your meal. 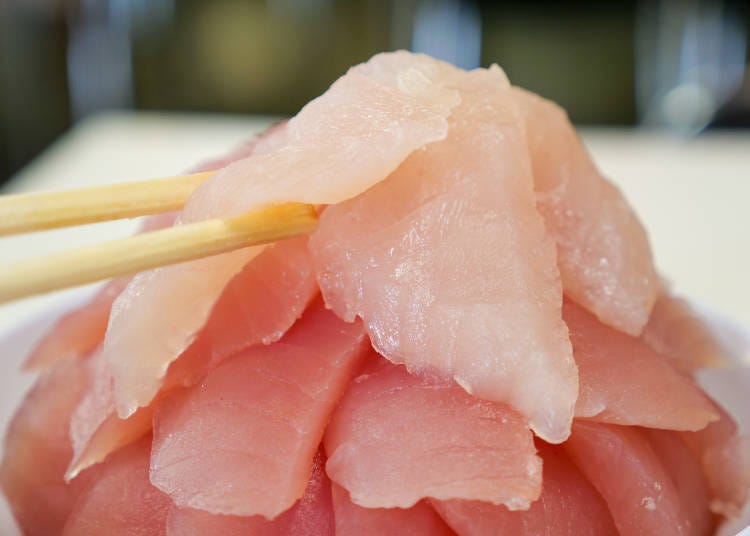 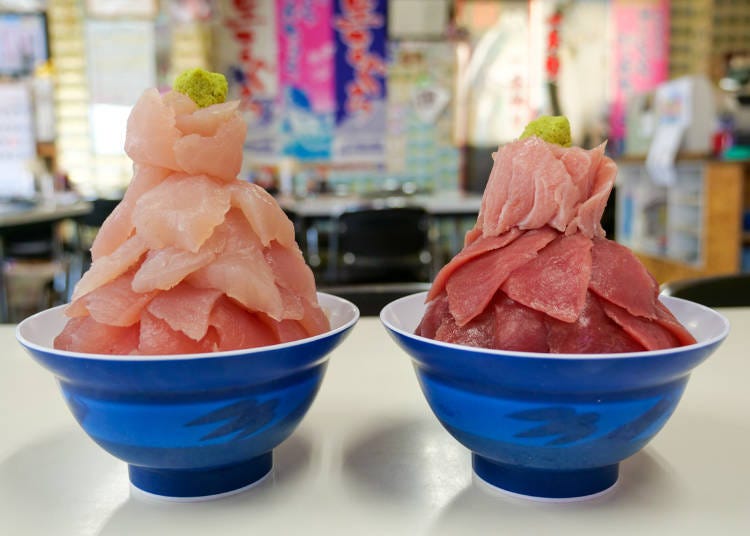 Comparing the size of the two rice bowls leaves us stunned by their amazing portion sizes. There are probably many customers who find the divide between reality and their wildest dreams blurred at the sight of their orders arriving

As one of the special traits of tuna is its far and wide territory, the name of the production site changes with the place the tuna is caught at. 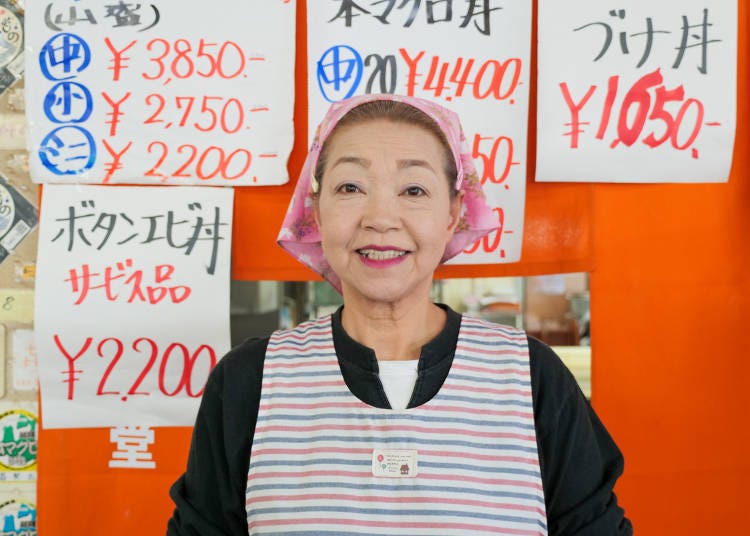 Miss Kimura Setsuko, who patiently explained to us about the shop

After having your fill of maguro-don, you should take some time to explore the surrounding area. Asamushi Onsen, in line with its name, is an onsen, or hot spring, and you can also take a walk along the coastline.

Asamushi Onsen has many places that you can enjoy without a car too, so don’t forget to make some unforgettable memories of your journey after your gourmet feast. 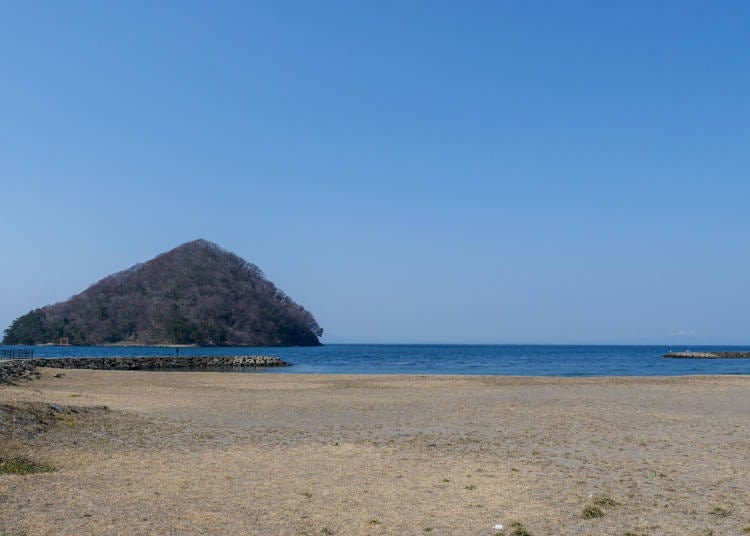 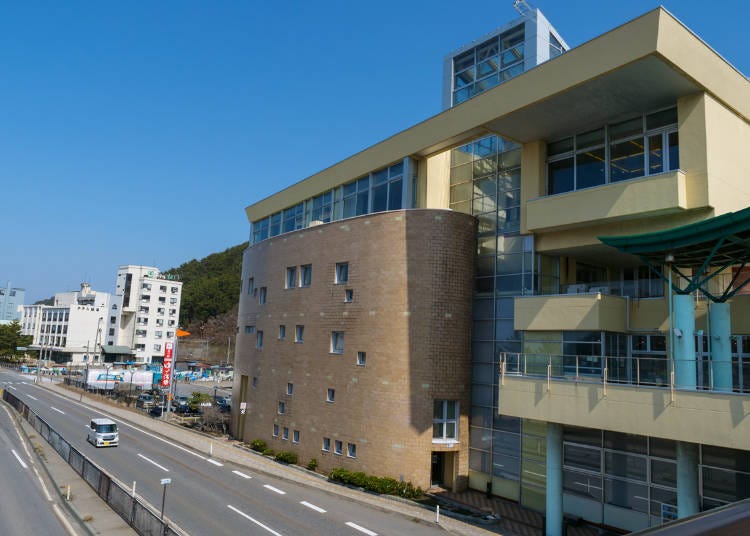 Yu-sa Asamushi, which offers a view of the whole of the Rikuoku Gulf from its observation deck.

Book an unforgettable experience in Aomori!

Explore Aomori City and create your own seafood rice bowl!
*This information is from the time of this article's publication.
*Prices and options mentioned are subject to change.
*Unless stated otherwise, all prices include tax.