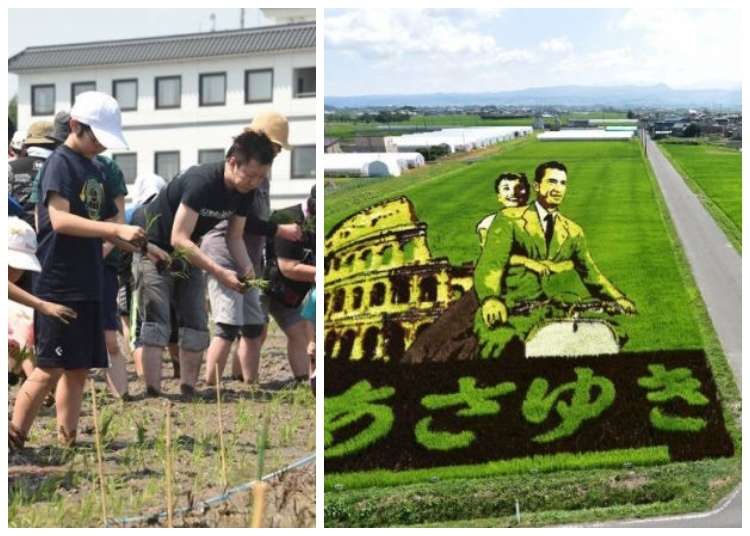 The Japanese town of Inakadate has become famous for its rice field art (called Tanbo Art in Japanese) held from early June to October.

The designs change every year and have included such themes as Star Wars and Roman Holiday. What is it about Inakadate's rice field art that draws visitors from all over the world?

Exactly what is rice field art in Japan? 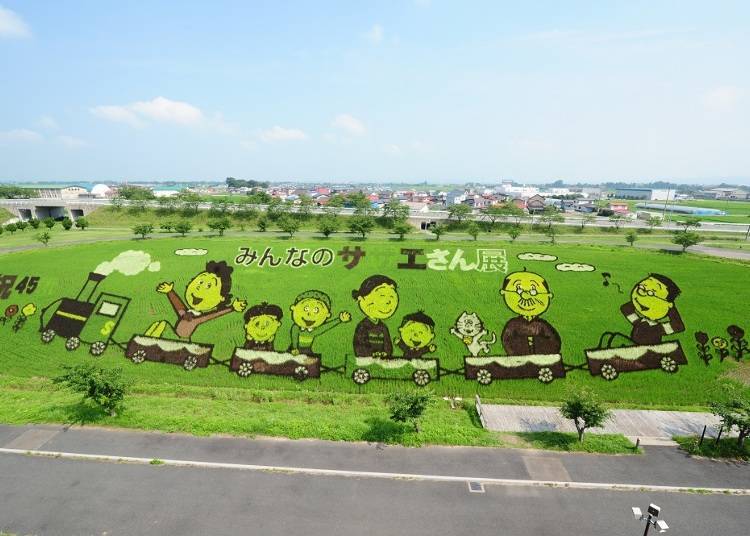 Rice paddy art, or Tanbo Art, is the creation of pictures and letters made by planting different color types of rice.

Inakadate Village in Japan, located in the middle of Aomori Prefecture, was the first place to create rice paddy art and currently, there are two locations in the village dedicated for that purpose.

It originally began as a way of promoting the local Tsugaru Otome rice brand. It started in 1993 when the staff at the village office came up with the idea that it would be interesting not only to experience rice cultivation, such as rice planting and rice harvesting but also to create pictures with three types of rice of different colors. 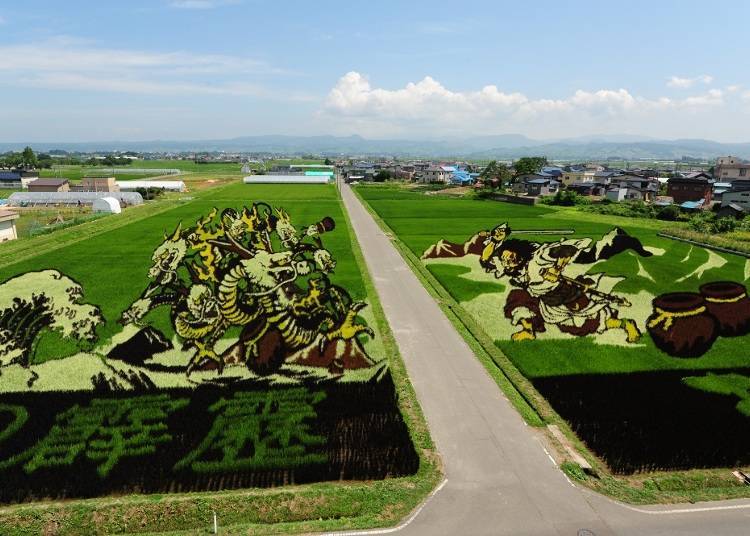 The design changes every year with the art teacher in the village school lending a hand. It is drawn in perspective so that the picture is not distorted when viewed from an observation deck.

Once a design has been decided, the varieties of rice to be planted are selected and a blueprint is made. The positions that will serve as marks for planting the seedlings are determined and then marked by stakes following the completed blueprint.

Once that is done, the planting of the seedlings begins. Once the rice plants have matured the rice paddy art is completed. What is amazing is that all of this work is done manually by the villagers. 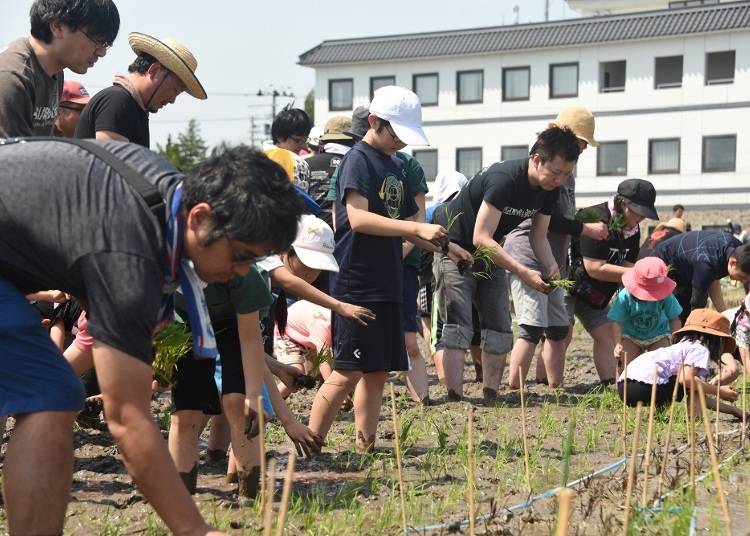 Applications to participate can be made on the Inakadate Village website (English, Korean, and Chinese languages supported). Both are on a first-come, first-served basis, so if you are interested, early application is recommended.

Some of the incredible Inakadate rice field art works created in the past! 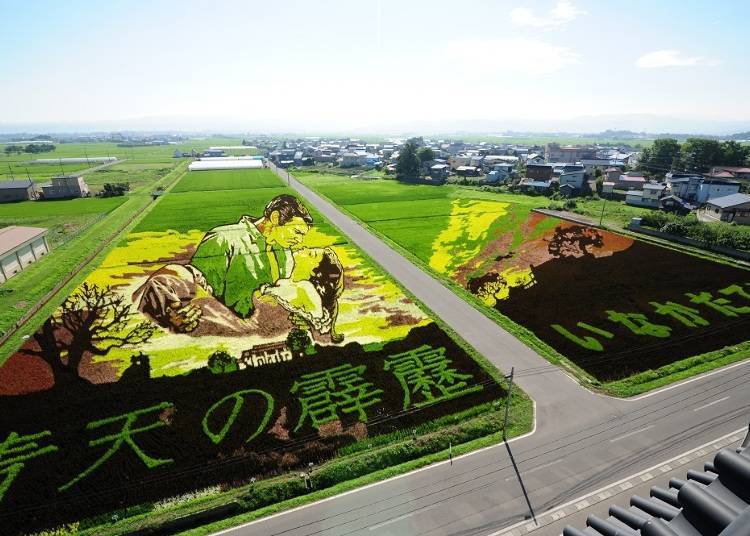 The theme in 2015 was Hollywood movies. Two works, the timeless masterpiece Gone with the Wind, which was released in 1939, and Star Wars: the Force Awakens were created in the rice fields at that time. The scene of Rhett Butler holding Scarlett O'Hara, used in the movie poster, was skillfully reproduced. 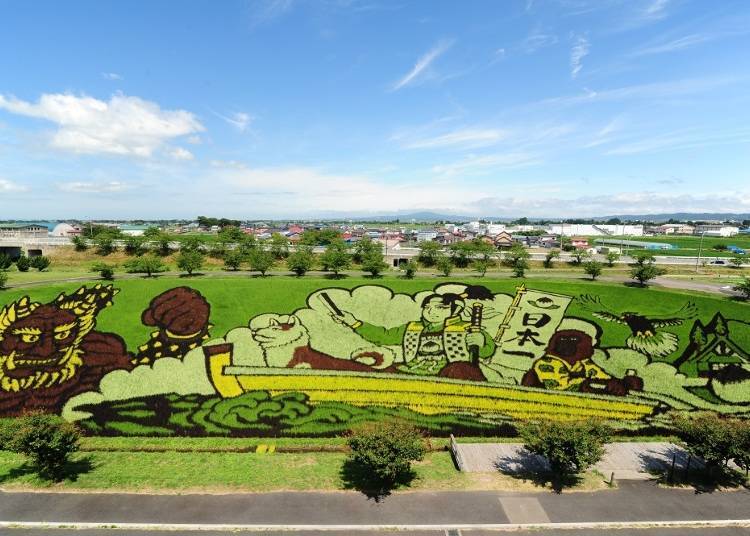 The themes in 2017 were the Japanese fairy tale Momotaro and The Legend of Yamata no Orochi, the famous Japanese mythological story about an eight-headed and eight-tailed Japanese dragon. The contrast of the fur on the dog and the drawing of Momotaro looks realistic! 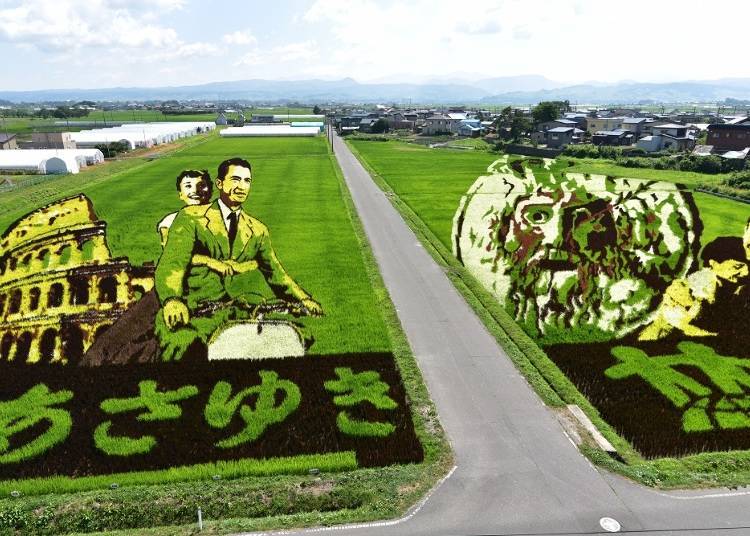 The themes for 2018 were Roman Holiday and Tezuka Osamu Characters. The scene of Joe Bradley and Princess Ann riding a Vespa around the city of Rome from the movie Roman Holiday was recreated. The animated expressions of the two are so realistic that they seem three-dimensional.

Where you can see Inakadate Village’s rice paddy art 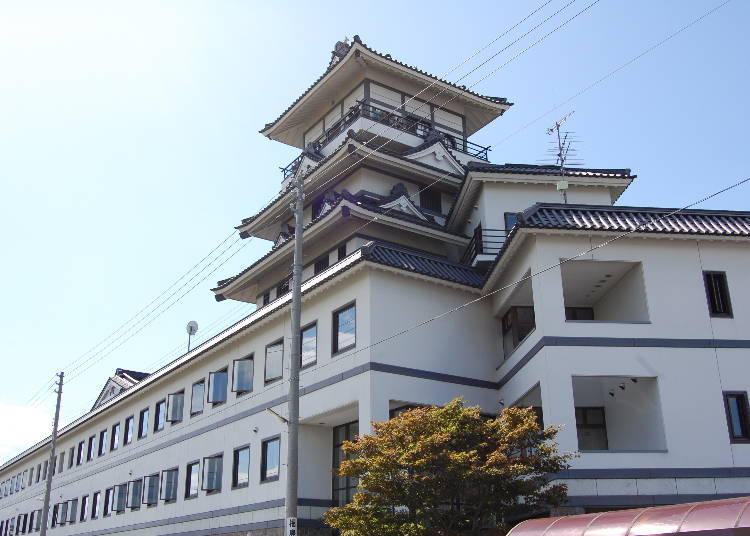 The first venue, Inakadate Village Observatory, is located inside the Inakadate Village Government Office and the field can be seen from the observation deck on the 4th floor and the castle tower on the 6th floor. 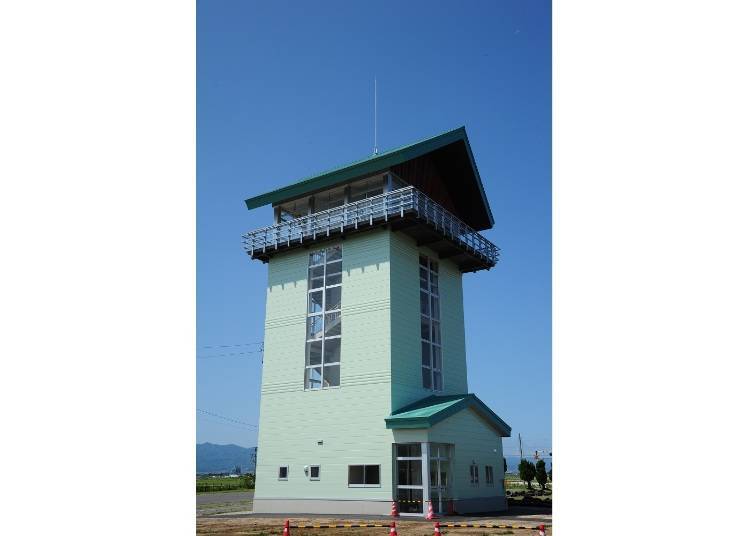 The second venue, Yayoi no Sato Observatory, is located on the premises of the Inakadate Yayoi no Sato Road Station. Since it has a restaurant and a direct sales office, it is ideal for having a meal and shopping for souvenirs.

In addition, the Tanbo Art Station, which is located on the Konan Railway Konan Line, is about a 30-minute walk from the first venue and open for a limited period from April to November.

The themes for 2020 are the Mona Lisa, a motif based on the masterpiece of Italy's leading artist Leonardo da Vinci and Japanese Western artist Kiyoki Kuroda, and the anime Evangelion, the popularity of which has caused a social phenomenon in Japan. The Mona Lisa will be at the first venue from June 1 to October 11 (closed on October 4 ), and Evangelion will be at the second venue from June 13 to October 11.

The best time to see the fields is from mid-July to mid-August when the spaces between the rice stalks disappear as the rice grows. However, in June the rice fields are still a lush green and do not begin to change color until September. Visit Inakadate Village and see the incredible rice paddy art!

When visiting from the Tokyo metropolitan area, take the Tohoku Shinkansen Hayabusa from Tokyo Station to Shin-Aomori Station. Transfer to the JR Ou Main Line, get off at Hirosaki Station, then transfer to the Konan Railway Konan Line and head to Tanbo Art Station.

From mid-June to early October, when the rice field art is at its best, the free shuttle bus Tasaabei (capacity: 9 people) connecting the two venues runs every 30 minutes. The Yayoi-no-Sato Observatory is about a 5-minute walk from Tanbo Art Station, so it's best to first view the 2nd rice paddy art and then take the bus to the 1st rice paddy art venue.

*This article was originally published in April 2020. Details may have changed since this time.

Tohoku's Hidden Gems: These Rural Japanese Areas Look Like Something From A Fairy Tale
Amazing Rice Paddy Art! Behind the scenes of a unique modern Japanese tradition
*This information is from the time of this article's publication.
*Prices and options mentioned are subject to change.
*Unless stated otherwise, all prices include tax.