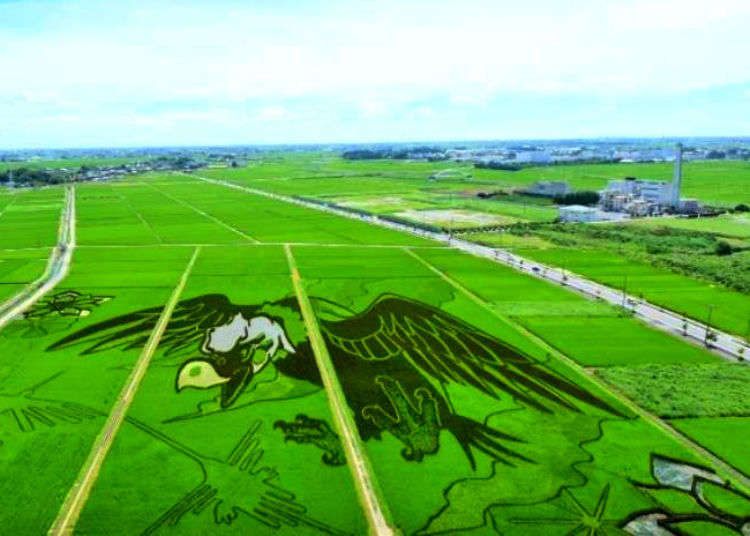 Amazing Rice Paddy Art! Behind the scenes of a unique modern Japanese tradition

Using a whole paddy field as a canvas, planting different varieties of rice that boast all sorts of colors, from green to red, and having them grow into large artworks of anime characters or sceneries – that’s Japan’s rice paddy art of July and August! This curious art style was first started in a village called Inakadate in Aomori Prefecture and the large landscape art drew in so many people, the topic spread all across Japan and even to Korea and Taiwan. As of today, there are over 100 places doing rice paddy art!

2018 also marks the 7th anniversary of the National Rice Paddy Art Summit, held to exchange information on technology and more among paddy enthusiasts. This year, it took place in Aichi Prefecture’s Nagoya City and about 25 groups and organizations from all over Japan gather each year while rice paddy art crops up across the country.

We’ll be taking a closer look at this fun art style, discovering how exactly such an artwork is made and showcasing a hot spot that's near Tokyo as well. With plenty of water and big differences in temperature between day and night, Japan is perfect for growing rice – so let’s go check out these dynamic artworks that connect centuries of history with modern ideas!

How is Rice Paddy Art Made? 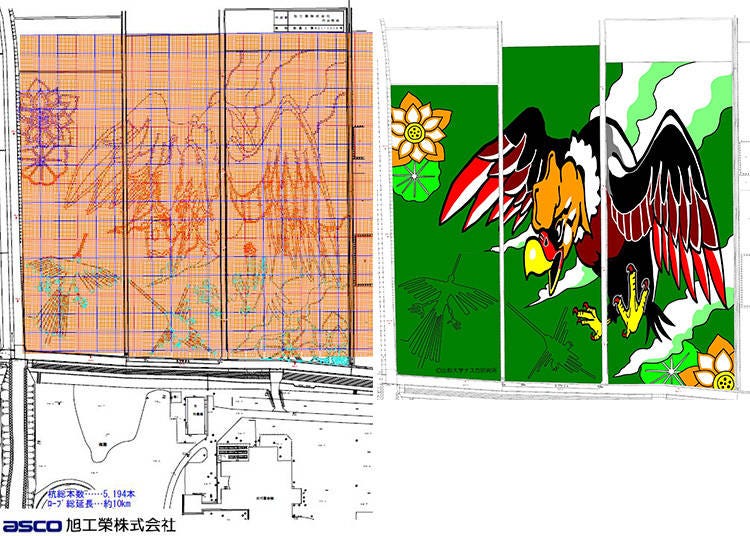 1. Creating a design
How does the design for the rice paddy art come to be? Generally, municipalities or the people in charge of an executive committee are at the center and many designs focus on a specific theme, often famous paintings or people and things that the local area has a connection to.

Sometimes, the public decides on a design. Recent years have seen a lot of collaborations with famous series such as Star Wars or Dragon Quest. The designs are also getting ever more elaborate in their setup, often spaced out over different areas that have visitors go from one spot to the other to visit several neighborhoods.

2. Devising a blueprint
Once the design is decided, the surveyor makes a blueprint. Since rice paddy art is looked at diagonally from above or from far away, it needs to look three-dimensional by planning it in perspective. Software is used to determine markers that act as coordination points to outline the design – it’s not uncommon to have thousands of these markers for a single picture!

Based on them, a mesh of horizontal and vertical lines is created that the design is then placed in. When looking at it directly from above, you’ll see the top part of the design fanning out.

Based on the calculated distance and angle of the coordination points, sticks are set up in the rice field with the help of a theodolite (an instrument that measures angles between points). 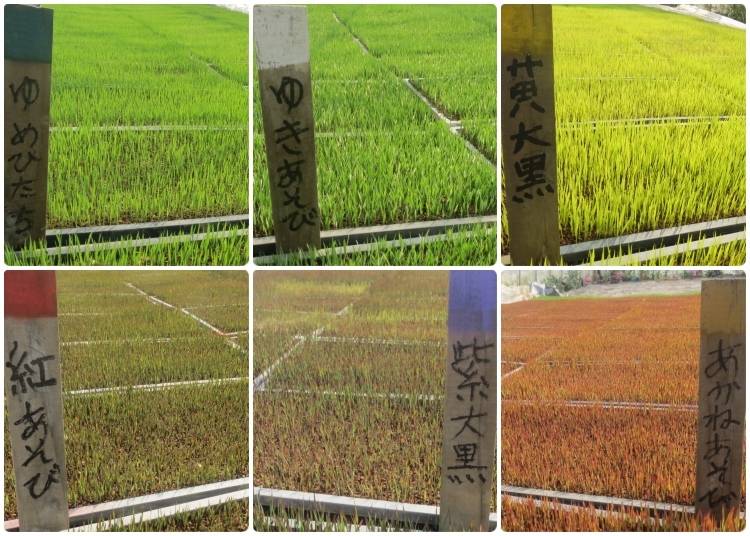 3. Growing the rice (between May and June)
Before the seeds are sowed on the field, the artists grow seedlings for planting that match the design – this can range from modern edible rice to varieties grown in ancient times, glutinous rice, and more.

Their colors vary quite drastically, including the standard green, a yellowish green, deep purple, yellow, white, orange, red, and so on. The more complex the design, the more colors are needed, so you’ll see some artworks that incorporate over 10 varieties of rice! 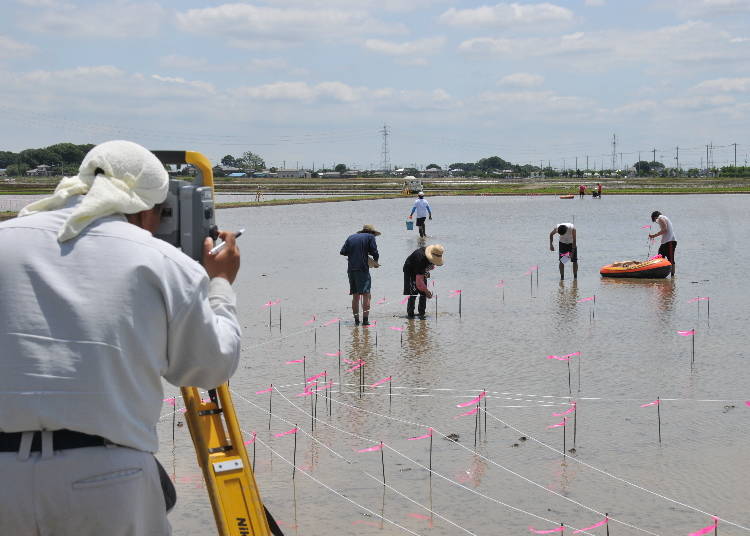 4. Marking the field
The rice paddy is further marked accurately with wooden poles, based on the distance and angles of the coordination points. Then, the artists are divided into a survey team and a paddy team, placing stakes into the field where the rice seedlings will be planted to look their best from a distance.

The field is also divided into different areas by spanning a rope. This is an important step that lays the foundation of the rice paddy artwork and accurate work like this is what makes smooth curves in a design possible in the first place. Depending on how big the field is, this careful marking usually takes about a full week. 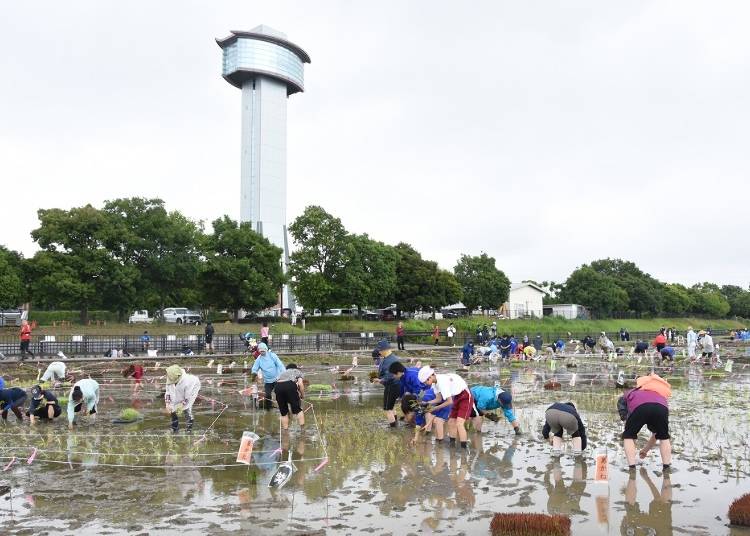 5. Planting the seedlings (June)
The planting of the seedlings is a popular event in which many local citizens participate via prior application. Each seedling needs to be planted by hand, one by one. The rice paddy art’s executive committee usually starts the recruitment of volunteers around May and the planting starts in June, with more than 1,000 people helping out with large-scale artworks. Based on the previously set markers, several kinds of rice seedlings go on the field.

6. Tending to the rice (from June) 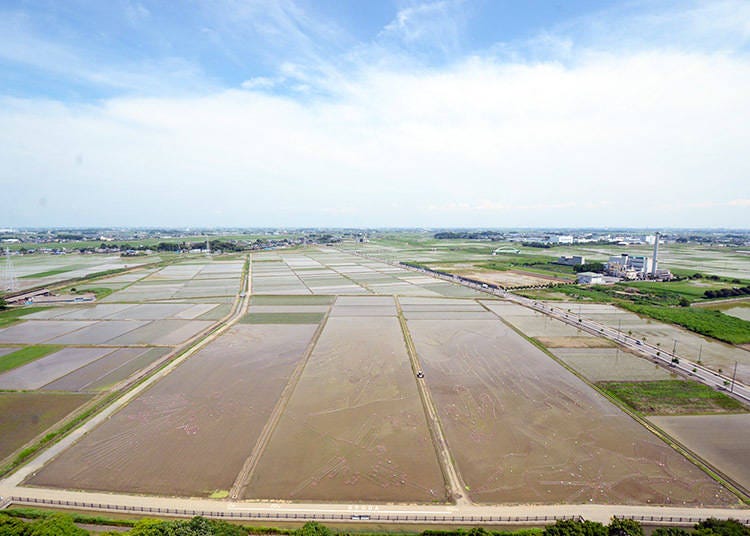 Right after planting. Note the faint outline of the design. 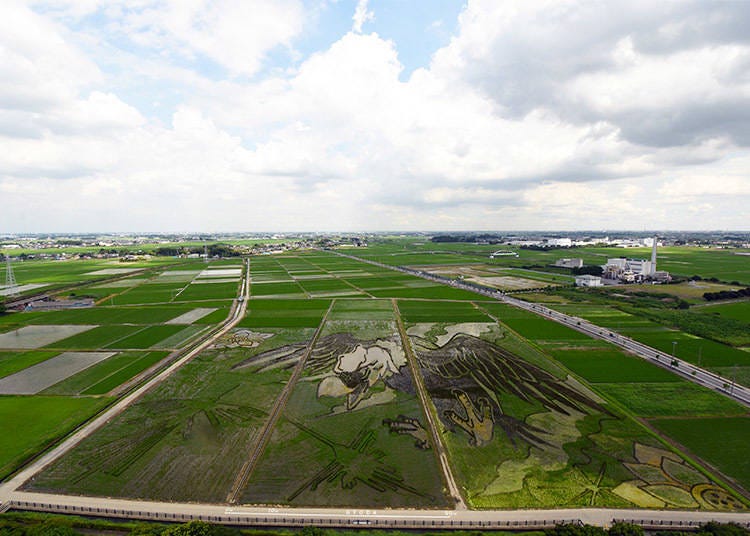 The field between mid-July to late August. The design becomes much more well-defined. 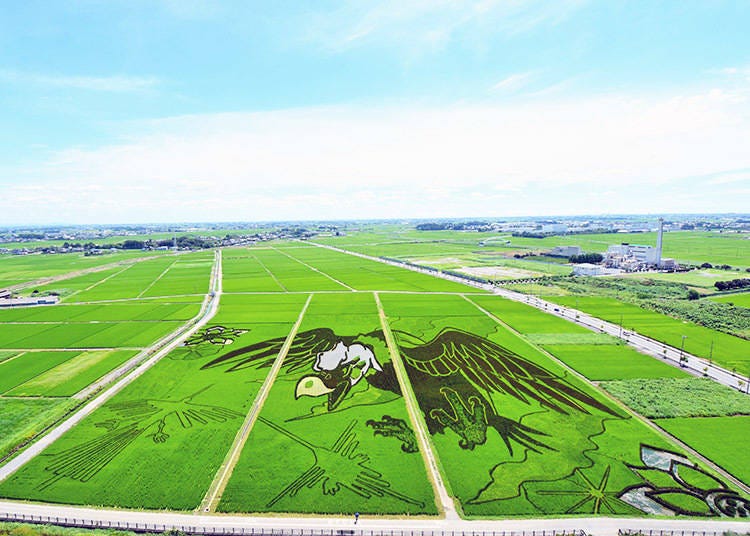 As the rice grows, people from all around the world flock to the paddy fields to admire the artwork! For an entrance fee, you can climb on a tower or a high building to see the piece from above, and depending on the location, temporary observation platforms are also often set up just for this purpose. 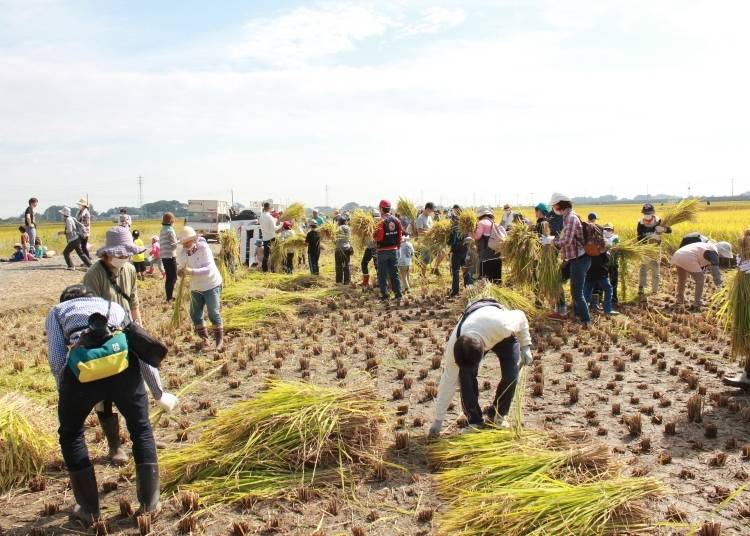 7. Rice Harvest Event (September to October)
Rice harvesting experiences are held to reap the rice from the paddy field throughout September and October. Because an artwork is made up of different varieties of rice, machine harvest won’t work and the field needs to be reaped by hand for the most part. Sometimes, certain parts are harvested in advance and the participants then get to enjoy rice balls made with the fresh rice from the field or may take the rice they harvested home with them. In general, the rice from the artworks is used for school meals in the area, while the decorative varieties are fed to livestock.

While many of the larger rice paddy art sites are a fair distance north of Tokyo, we picked up a site that is doable on a day trip.

Gyoda City is in the northern part of Saitama Prefecture and registered as a Japanese heritage site for its historic tabi (traditional Japanese socks) industry. It also holds the Guinness World Record for the world’s largest rice paddy art (27,195 square meters!) – a rather famous place!

In Gyoda, rice paddy art means to deepen the understanding of agriculture and environment through the experience of “making rice” as art. It all began with the desire to make people more familiar with rice, which is the staple food of Japan. The theme of the 2018 artwork is “Great Wings and Nazca Lines.” Nazca Lines are famous ancient geoglyphs in southern Peru and the rice paddy artwork doesn’t only feature the representative hummingbirds and a condor but also the “ancient lotus,” the symbol of Gyoda City.

Visiting Japan in May-October? Give rice paddy art a go!

Rice field art is a big project that lasts from May to October, for about half a year. With fun events such as rice planting and harvest, the art is particularly popular among families, illustrating how rice is grown and how it finds its way on our tables. Rice paddy art is an event not only for the locals – it draws in people from all over the country and many venues now feature cameras that show the evolution of the paddy field, from bare to fully grown. The recent rice field art boom has created various platforms for exchange between tourists and locals, leading to people having a better understanding of agriculture and a heightened awareness for things such as food safety. On top of that, admission fees, on-site food stalls, and utilizing multiple venues creates a ripple effect that revitalizes the entire area. With international visitors from countries such as China and France, Japan’s rice field art is sure to spread even further!