HOME Kansai Wakayama Kumano Kodo, Shingu, Shirahama Adventure World Japan: Safari Tours and more - nowhere else in Japan can you get this close to pandas and other wildlife! 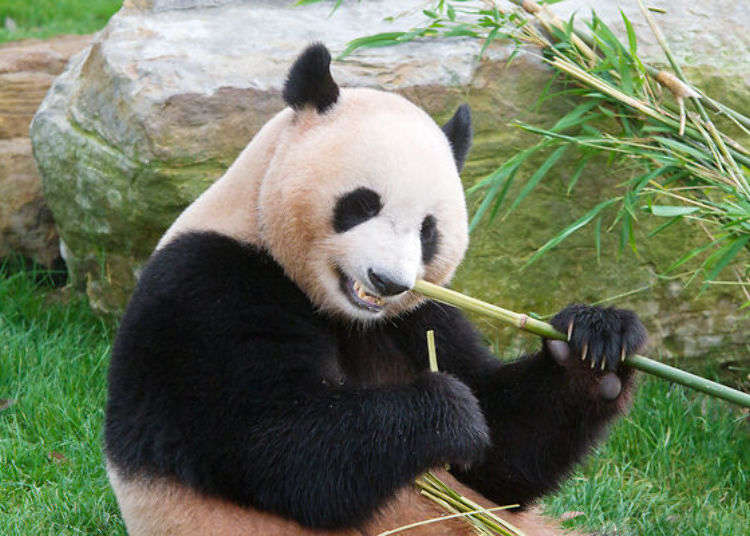 Adventure World Japan: Safari Tours and more - nowhere else in Japan can you get this close to pandas and other wildlife!

You can not only get up surprisingly close to pandas here, but also many other animals as well, and some you can even touch at the theme park Adventure World. This is no run-of-the-mill zoo. The scale is huge and you will be enthralled by all the animals awaiting you!

Most noticeable are the panda that have almost celebrity status in the animal world. There is not a person in Japan today who does not know about pandas. But even though it is a major animal attraction, as of 2016 there are only three places in Japan where you can see them. Among them, Adventure World in Shirahama-cho, Wakayama Prefecture boasts the largest number of giant pandas reared in Japan.

For animal lovers, this is a dream world come true 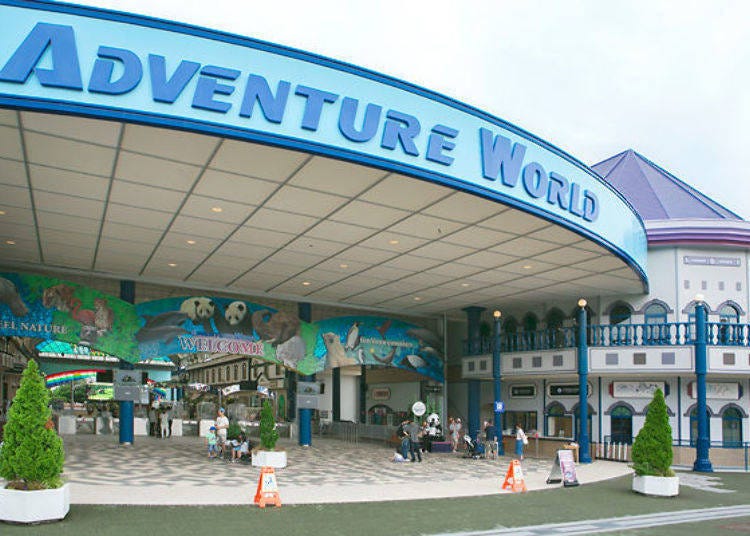 Adventure World is a theme park in which a zoo, an aquarium and an amusement park are integrated. Not only giant pandas but also many other animals live around the ~80 hectare (198 acre) grounds. 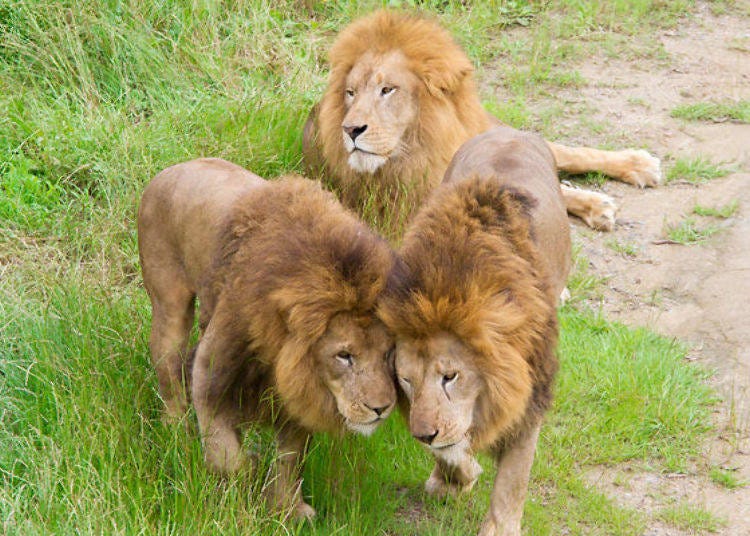 The lion is the King of Beasts. 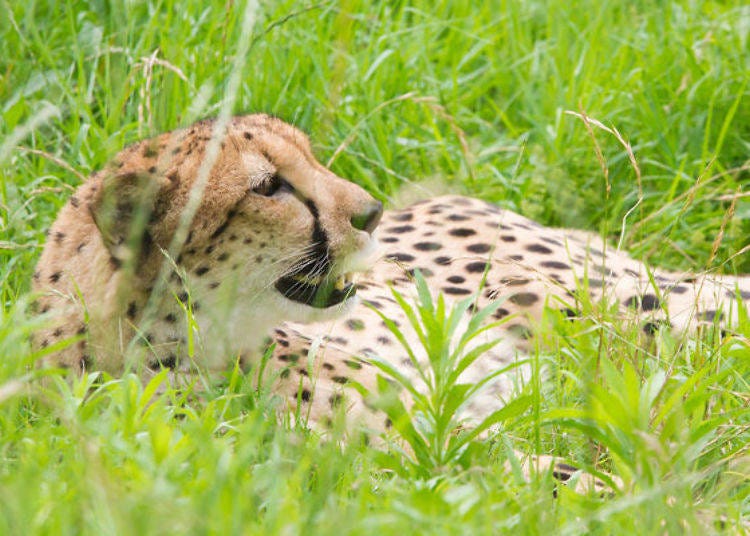 The cheetah is the fastest carnivore on earth. 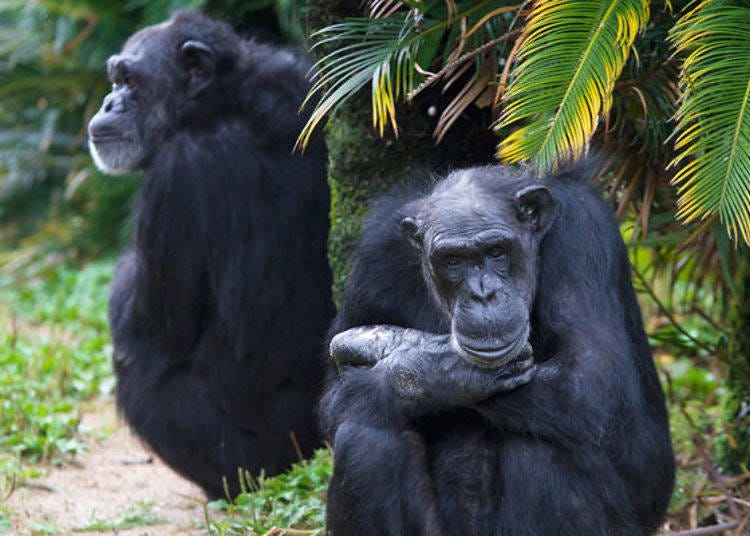 Chimpanzees are said to be very closely related to man. 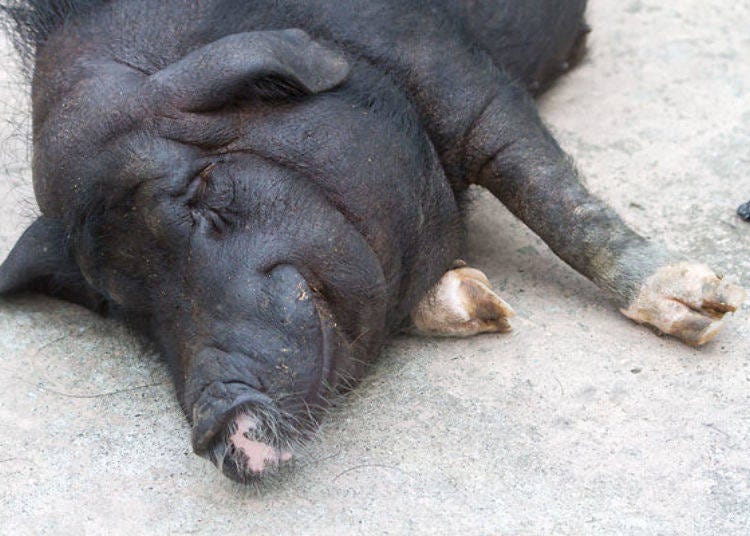 …A pig taking a nap.

These are but a few of the 1,400 animals that you can see in Adventure World. Animal lovers will be thrilled as here they can see land, air, and water animals all in one place.

Not only the size sets it apart from other zoos, but also its unique feature of allowing visitors to get up close to the animals. 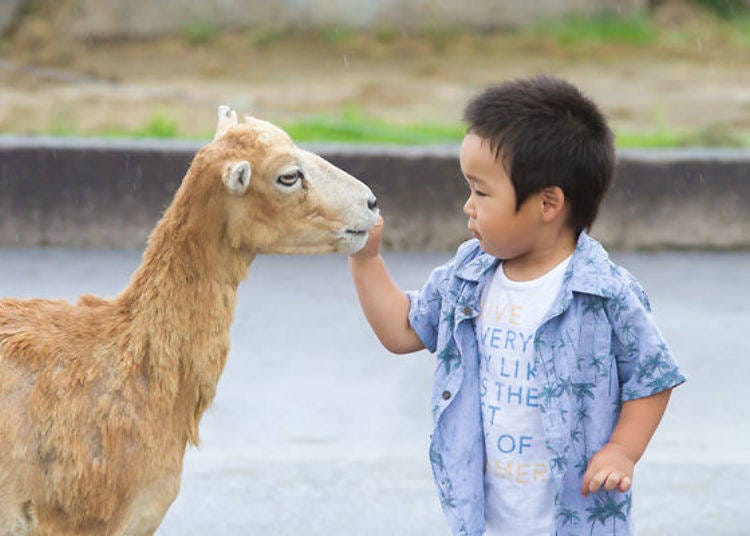 ▲This is how close you can get to some of them!

That might come as a surprise to many. Some might be alarmed by how close you can get to some of the animals, but in addition to being able to get so surprisingly close, there are many other experiences and attractions offered to allow you to come into contact with the animals. 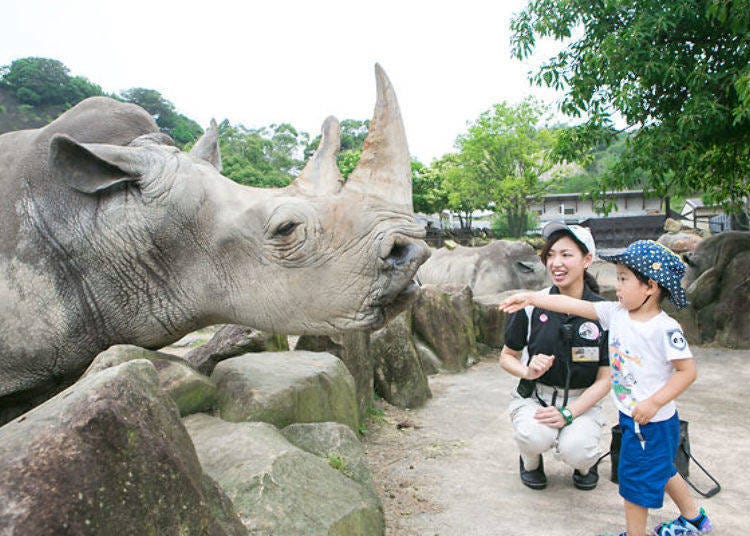 “We are of course famous for our panda, but our other strong point is enabling visitors to get up close to the animals. The concept here is ‘people, animals, and nature coming together’ and being able to get close to the animals is essential to that. This of course presents challenges to everything being safely managed because Adventure World is so huge,” explains Mr. Mitsuhiro Takahama of the PR Department.

The theme park is divided into a number of areas such as Safari World, Big Ocean, Animal Land, and a petting zone, and each offers a number of attractions and experiences.

Here is a brief description of some of the attractions and experiences which we recommend.

Lots of ways to get around! In Safari World you can feel like an explorer

This is the Safari World area. It is the largest area in Adventure World. In it the animals are kept in conditions as closely similar to their natural habitats as possible. 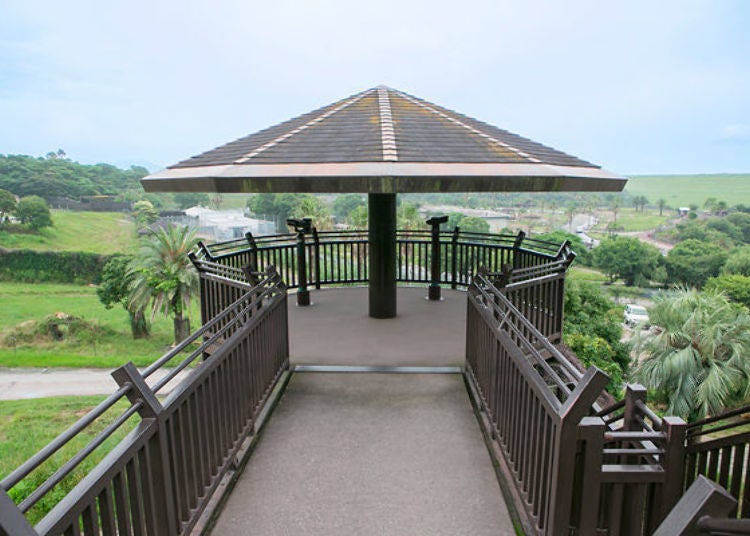 ▲From the Lion Terrace you can observe much of Safari World.

Shown in the photo is the Lion Terrace observation deck. Lions are lounging in the grassy area directly below. The broad expanse in the background is the Safari World area.It almost looks like a scene out of a Hollywood Jurassic Park movie.

Observing Safari World from here is a prelude to the excitement that lies ahead. The carnivore and herbivore animals are in separate zones and there are various ways each can be explored. 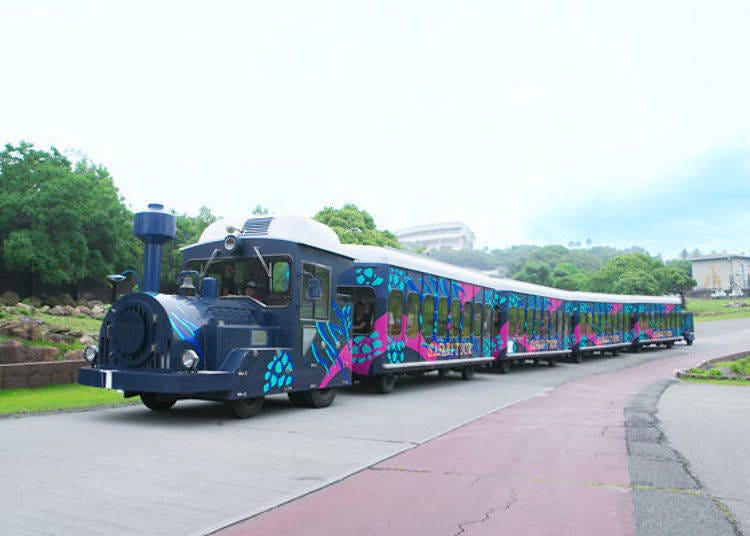 ▲The Kenya train goes all around Safari World and takes about 25 minutes, plus there is no charge. 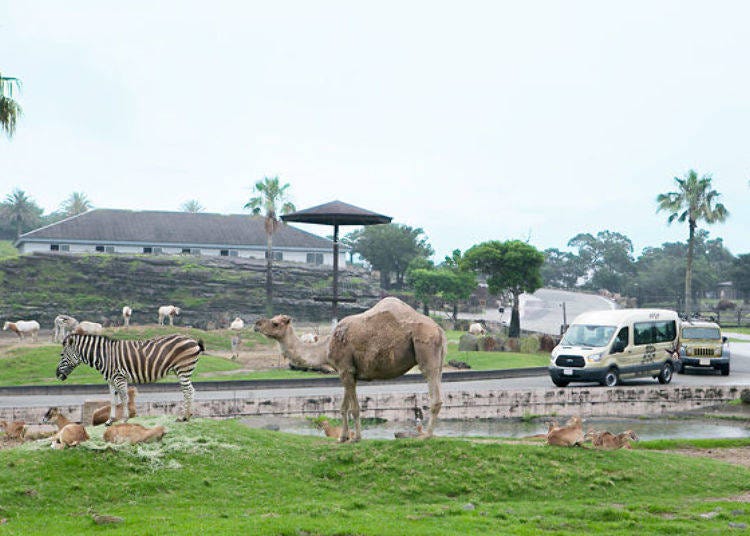 ▲ In the Jeep Safari Explore Tour you ride in a chartered jeep following the guide car while listening to explanations by wireless radio (estimated time about 70 minutes, Friendly Jeep [minibus] costs 3,000 yen per person; Family Jeep [chartered jeep] costs 12,000 per vehicle) *tax included in both prices 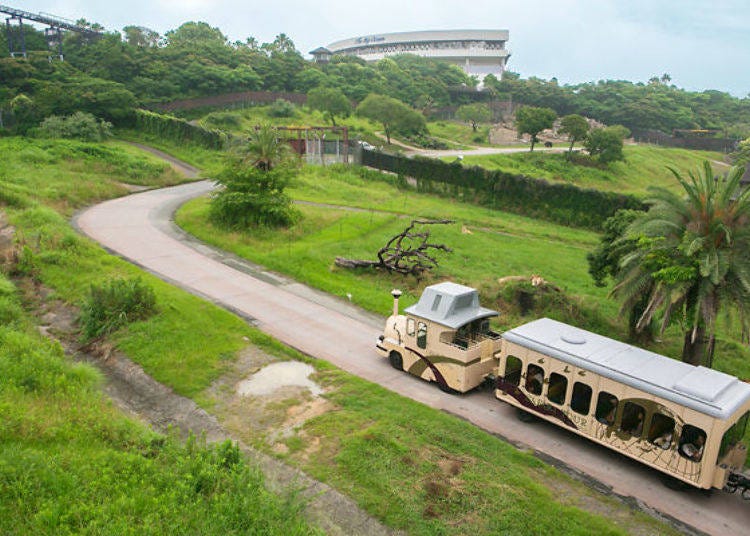 ▲You can see the carnivores up close from the Safari Caravan (estimated time about 60 minutes, 2,500 yen per person including tax)

In the herbivore zone you can rent bicycles and special carts and even walking is possible. You can actually walk up close to the animals. The efforts Adventure World make to enable visitors to get close to the animals is quite impressive. You can figure out the kind of tour
combination that best suits your tastes and that is a good way to start.

African elephants, rhinoceroses, giraffes! Enjoy the excitement of feeding them!

We boarded Mr. Takahama’s cart and he took us to the
herbivore zone for our first experience. 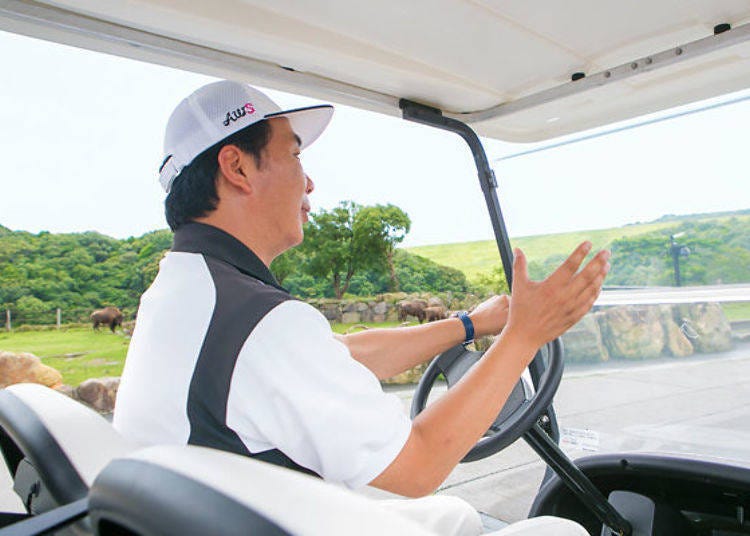 “In this zone we have a number of different feeding
experience attractions for the different animals. I think you will enjoy the experience of having these animals eat out of your hand,” he said. 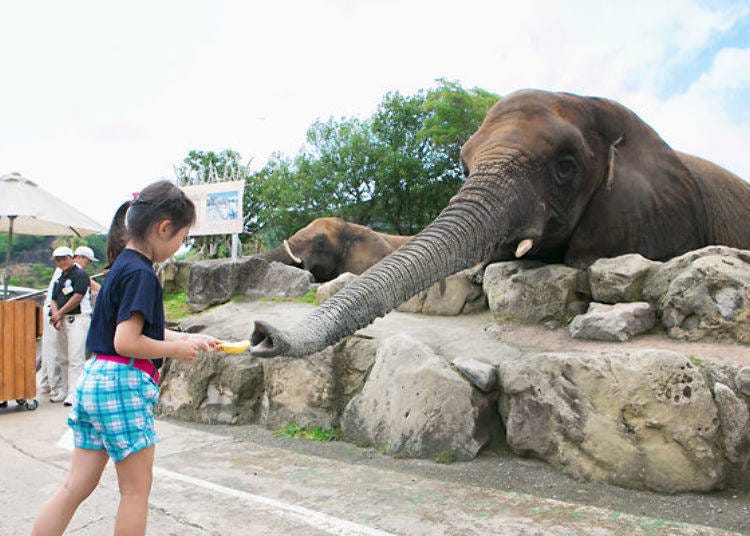 Child cautiously giving a banana to the elephant. The elephant deftly retrieves the banana with its trunk and quickly gobbles it down. 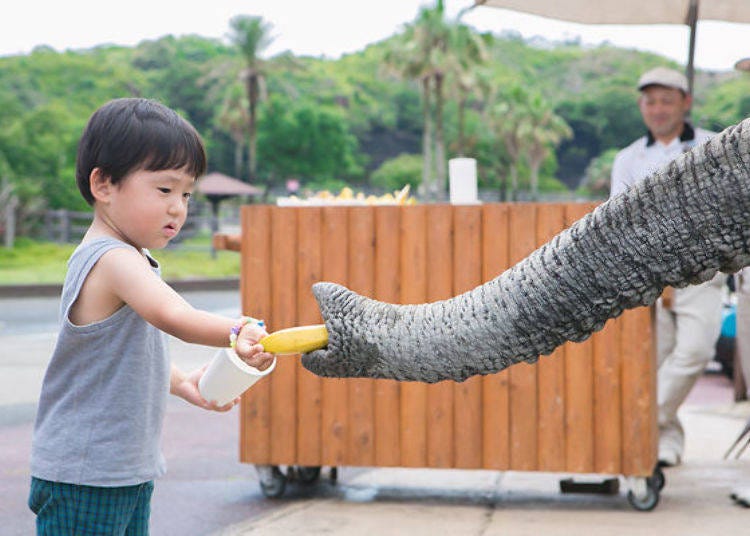 Adults watch on in interest. It’s not very often that you’ll get an opportunity to see animals being fed up this close.

There are many other types of animal feeding, too. Giraffes, white rhinoceroses, Malayan tapir... 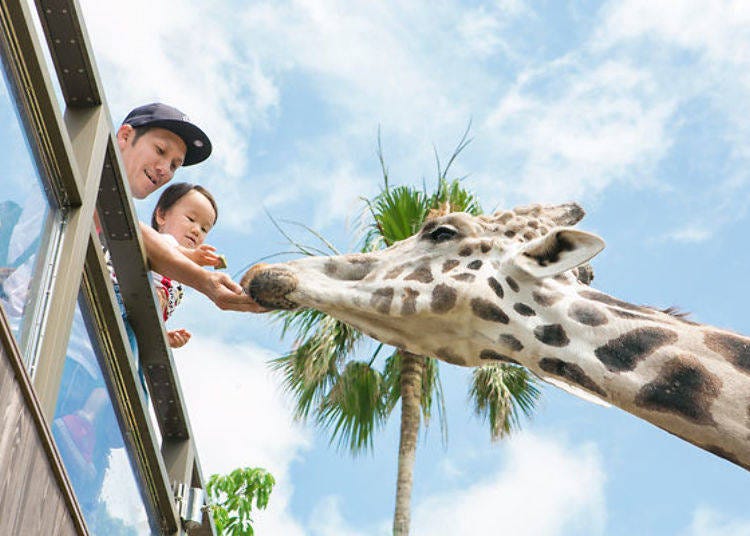 ▲Giraffe feeding (100 yen each time including tax). The giraffe will lick your hand with its warm tongue.

As for the animal feeding experience, the times vary according to the type of animal, so please keep that in mind. Plan your visit while looking at the Park Guide you receive when you enter the park.

All sorts of attractions! Lots of exciting things to see inside the park!

There are many other experiences and attractions vying for your attention in addition to the Safari World. 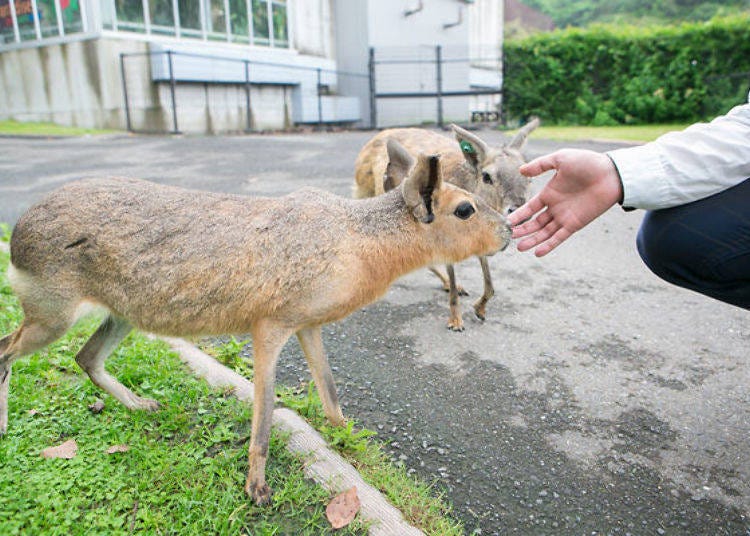 ▲There are many kinds of small animals and birds in the Feeling Area. You can freely touch the animals that roam around the area. 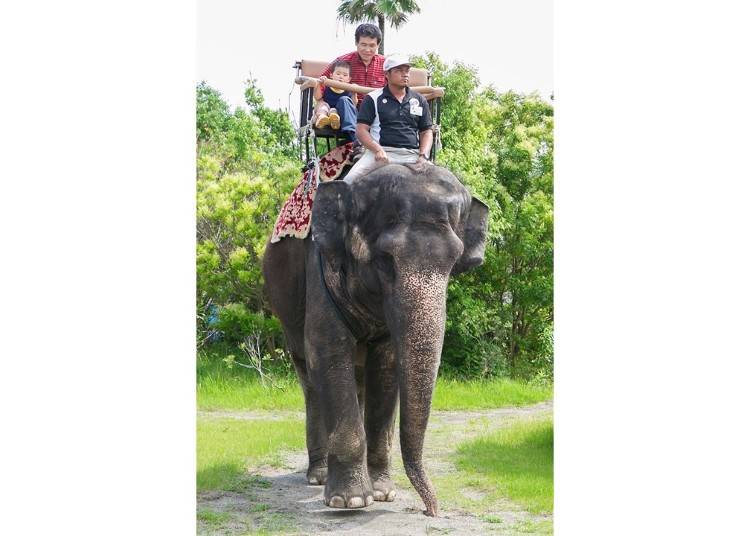 ▲ At Elephant Land in the Feeling Area you can ride an elephant. Ride atop the large back of an Asian elephant! (200 yen per person tax included) 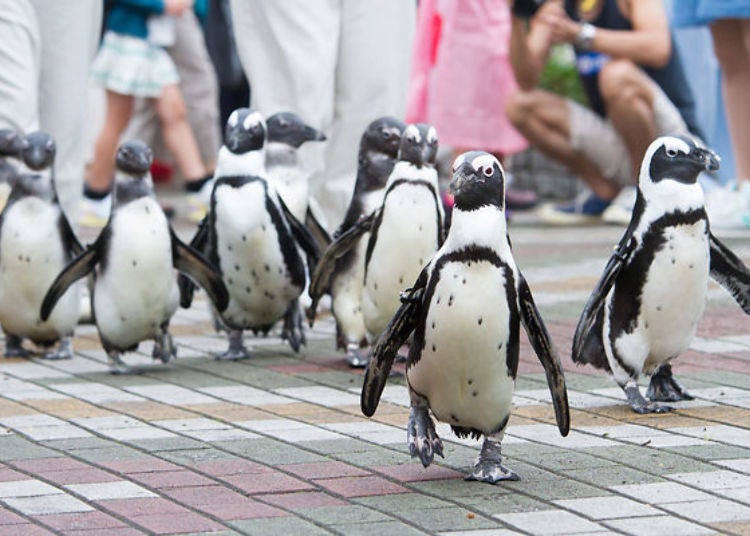 This large pool is called Big Ocean and the Marine Live dolphin show is held here three times a day. 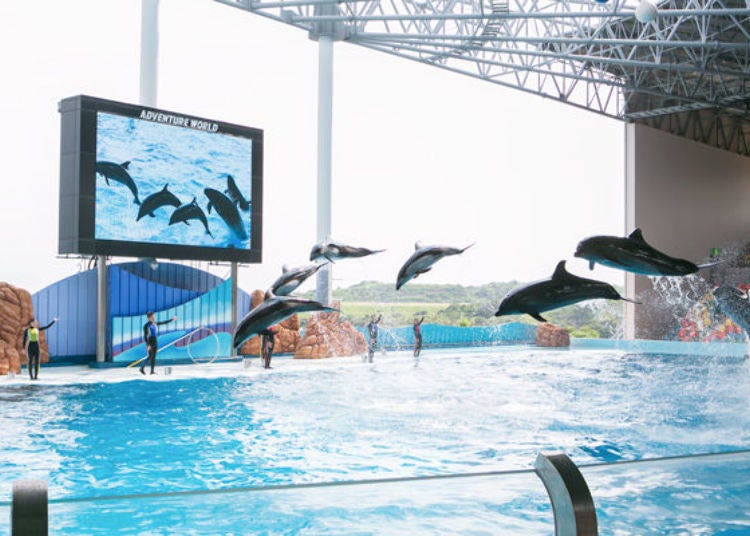 The dolphins delight spectators with their elegant performances set to music. This is also a very popular attraction. 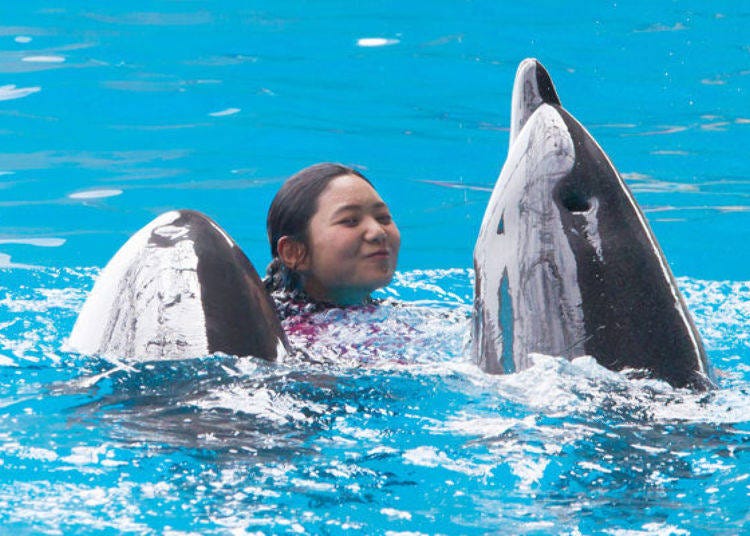 This theme park is a zoo, aquarium, and amusement park all in one. Hearing that you might think that each is quite small. Which would be only natural.

But just the opposite is true. As you can see, there is much to see in each area. You could easily spend an entire day here and not tire of all there is to do.

Now what you have been waiting for! The thrill of seeing pandas up close!

This is what you have been waiting for. The stars of Adventure World are without a doubt the pandas.

First, let’s begin with some trivia about pandas. Pandas (which are generally called Giant Pandas to distinguish them from Lesser Pandas) have not changed or evolved over the millenniums and as such are called “living fossils”. But pandas in the wild live only in deep forests in the mist-covered mountains of China, and because the pandas’ habits are elusive, until only recently they were considered to be “phantom animals”. 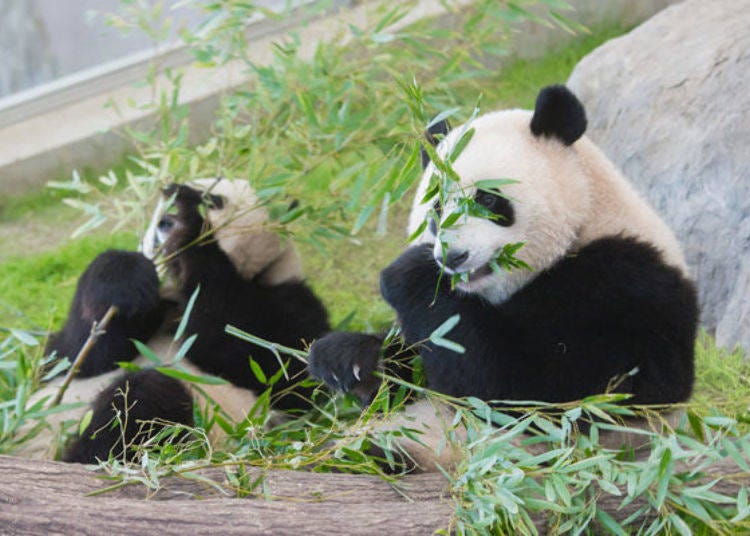 For various reasons, such as poaching, loss of habitat due to China’s economic growth, and worsening conditions regarding their food, their numbers sharply declined to a dangerously low level.

The main reason for their near-extinction stems from the low survival rate of pandas bred in captivity. There are only two times in a year in which female panda can become impregnated. “If the male and female are not able to mate at one of those times, then that year there will be no baby pandas,” explains the person in charge of the pandas.

That explains why there are so few in spite of their cute looks.

So now pandas are protected by conservation groups and the Chinese government. Accordingly, Adventure World started Japan-China collaborative research in 1994 as a Japanese branch of the Chengdu Giant Panda Breeding Research Base in China, in order to study the natural breeding of the giant panda. Two pandas were brought to Adventure World.

From then until 2016 14 have been bred here. That is the most anywhere in the world outside of China. Adventure World is one of the few places in the world to have successfully bred and raised pandas. 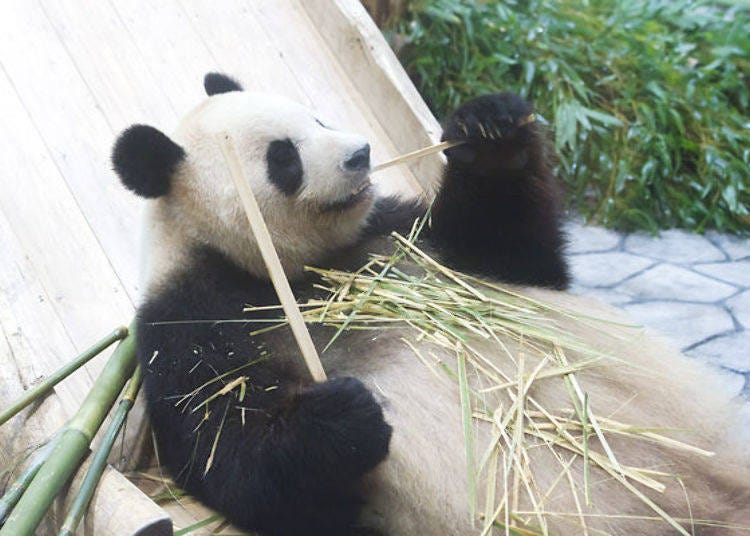 There are two places in Adventure World where you can see pandas: the rare animal breeding center called Panda Love and the Center for Research on Breeding and Wildlife Conservation called the Breeding Center. In the indoor and outdoor exercise areas of these centers you can see a total of seven pandas. 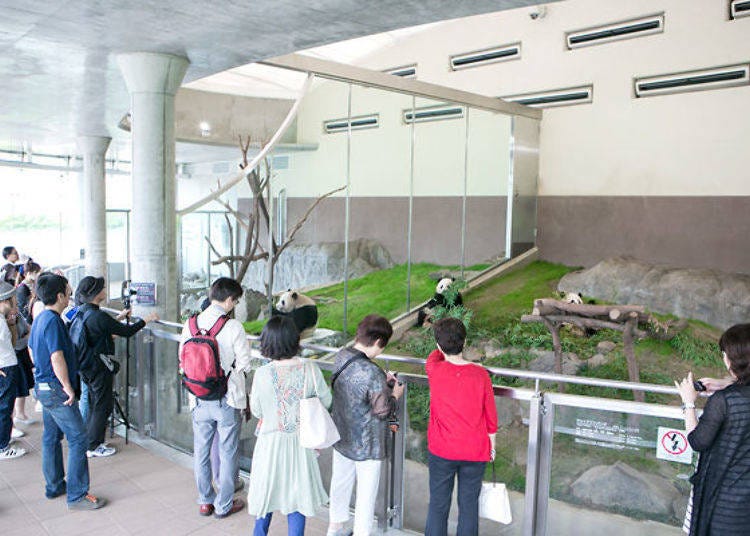 ▲Indoor panda area of Panda Love. It is crowded with park visitors throughout the day.

The pandas seem to spend all their time eating, sleeping, and lolling about. That would be a very lazy lifestyle by human standards. 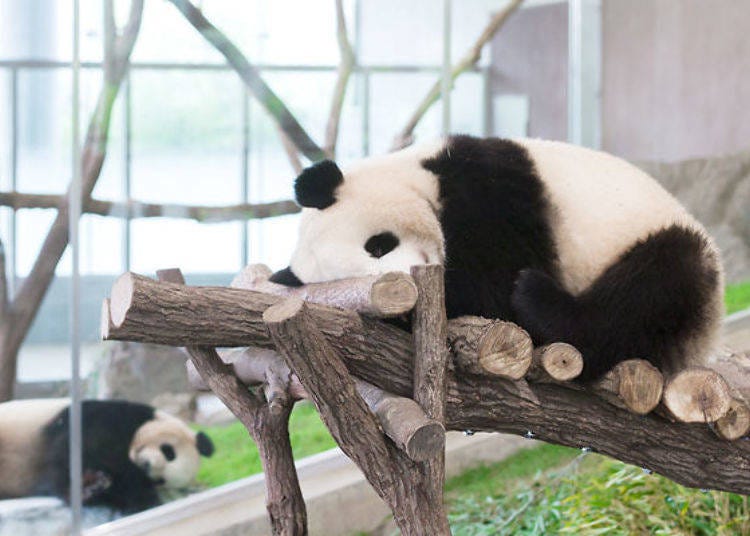 Pandas spend half of the day eating. An adult panda will eat more than 10 kg of bamboo and bamboo grass in a single day.

“They eat constantly from the time they get up,” Mr. Takahama of PR explained. 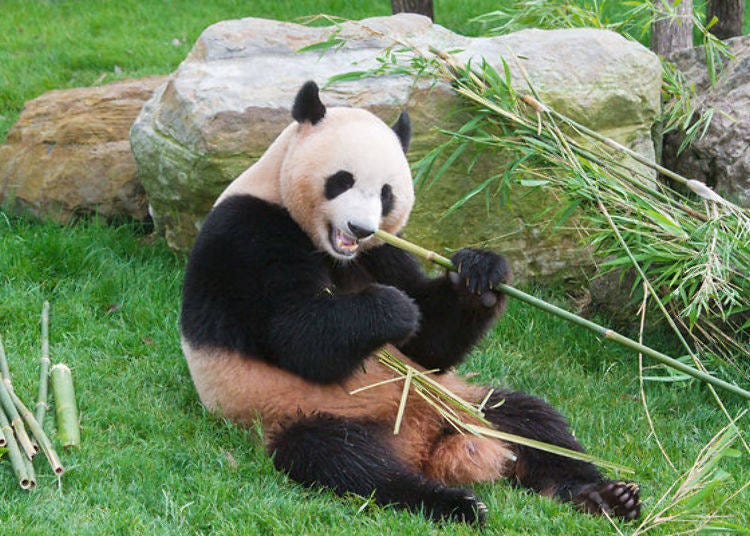 That dispelled my perception of them being nonchalant about eating, but doing so out of necessity. They are able to break down the hard bamboo with their powerful jaws and teeth.

So far we have mentioned a few of the attractions offered at Adventure World, but you are probably wondering
“Aren’t there any panda experiences?”

Naturally the answer to that is “Yes!” It’s called the Panda Love Tour (lasts about 50 minutes and costs 7,000 yen per person including tax). Participants on the Panda Love Tour are allowed to visit the backyard. This tour allows visitors to get closer to the panda than anywhere else.

However, the tour is only held once a day and limited to only 15 participants so as not to adversely affect the physical condition of the pandas, thus making the Panda Love Tour a very rare experience. It is necessary to sign up in advance on the website, but you should do this well in advance because tours quickly become fully booked due to their popularity.

Details of the tour are not allowed to be publically mentioned.

But after much cajoling, Mr. Takahama reluctantly told us a little bit about it. 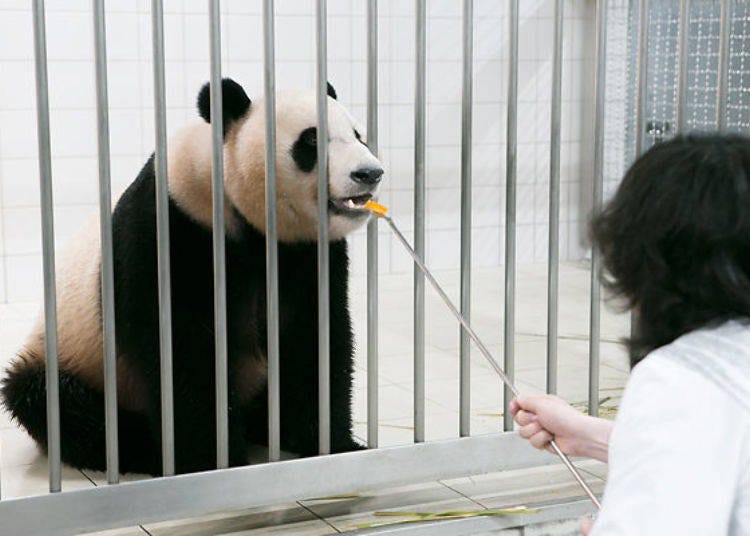 ▲You are allowed to feed the panda on the Panda Love Tour. 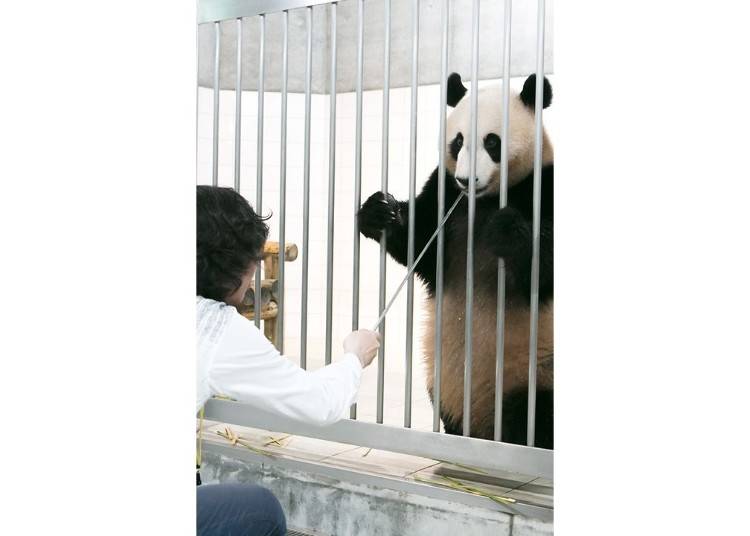 Pandas are close relatives to the bear family. Even though they are not likely to attack a person, they are large and powerful. Keeping that in mind, being able to get this close to the pandas to feed them is quite remarkable. 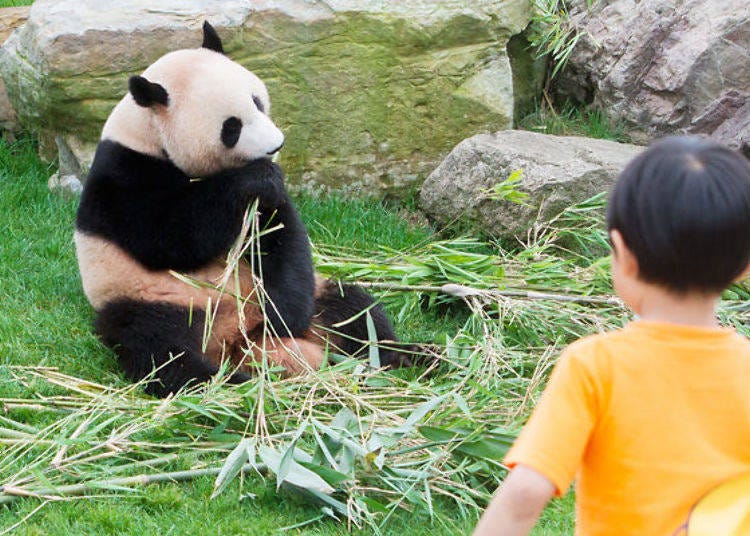 At Adventure World you can see the animals up close and even touch some of them, so this is a place that the whole family can enjoy.