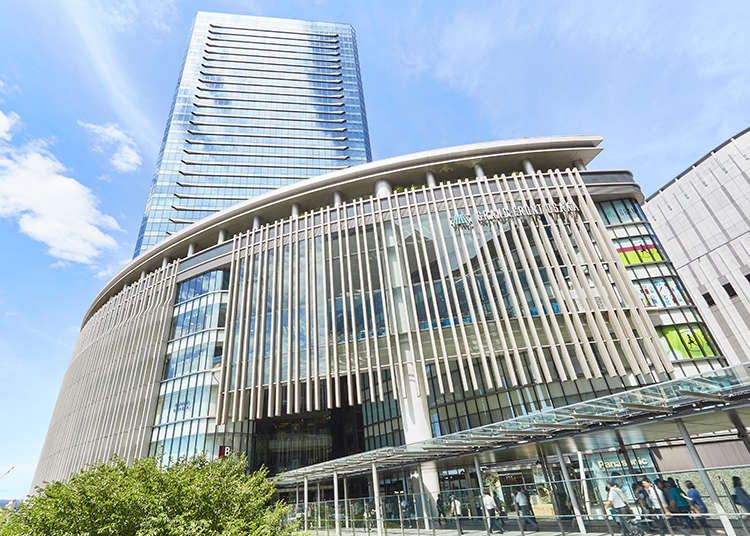 If you come to Osaka Station, this is one place you don’t want to pass by! Grand Front Osaka is the largest commercial facility in west Japan, with over 270 establishments. From cafes to relax in, restaurants to enjoy, and boutiques to buy clothes in, you’ll find what you’re looking for.

It’s split into three areas, Umekita Plaza, the South Building, and the North Building. Since it’s attached to JR Osaka Station, you don’t need to worry about getting wet on rainy days, either.

It’s an easy place to visit if you’re a tourist, too – with multilingual assistance and tax-free shops, they have you covered. And shopping isn’t all there is, either – there are places like ACTIVE Lab., where you can check out Japan’s latest technology. 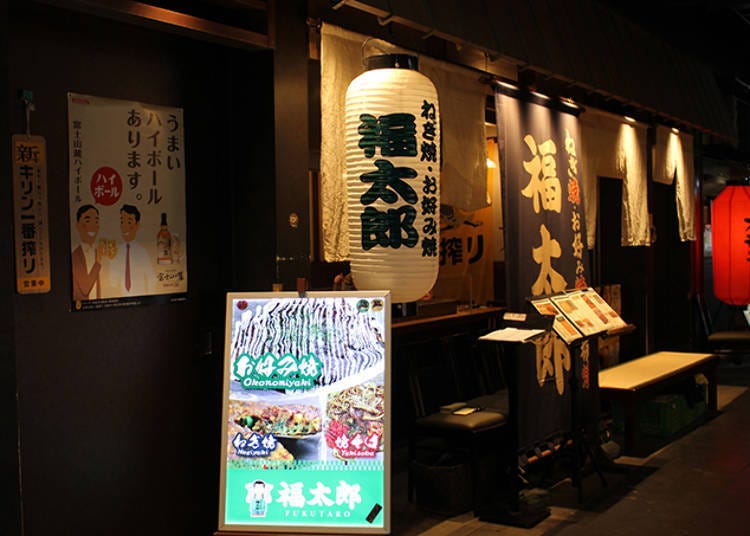 The okonomiyaki restaurant on Grand Front Osaka South Building’s 7th floor, Fukutaro, has a large lantern out front as its sign. It has a large griddle inside that they make your food on right in front of you, so you can enjoy taking pictures of the scene yourself! 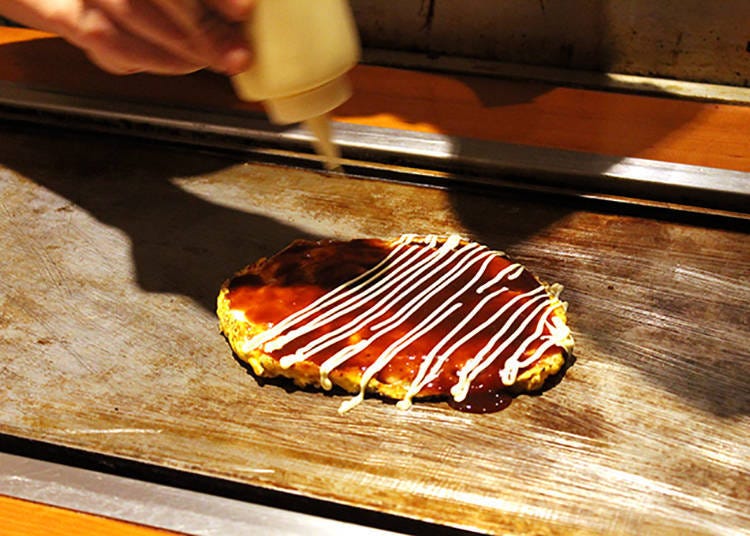 The appeal of seeing food on the griddle in real time

There are plenty of photos on the menu as well as English, Chinese (Traditional and Simplified) and Korean text. Popular items include the cheesy Mochidama-yaki, and the Tonpei-yaki Classic. The soft and fluffy okonomiyaki with plenty of cabbage have fully customizable toppings, and that’s half the fun. You can also order a vegetarian version, without the pork. 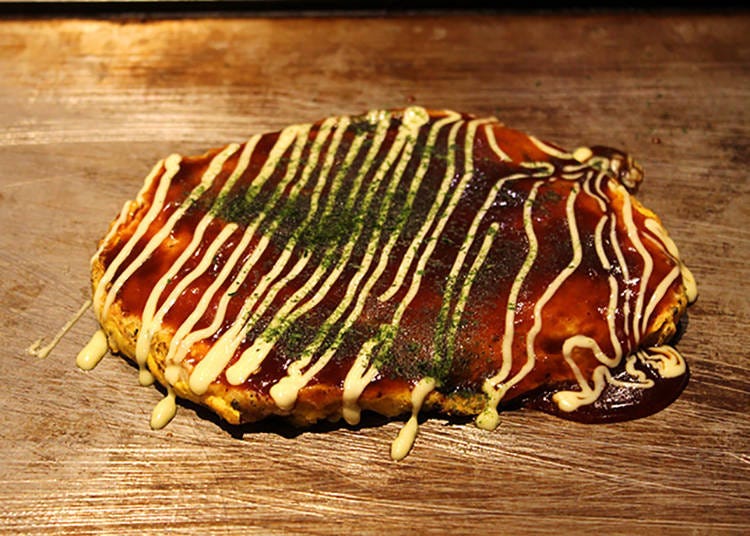 The side dishes other than okonomiyaki are also excellent, so groups will often order them with okonomiyaki and share. 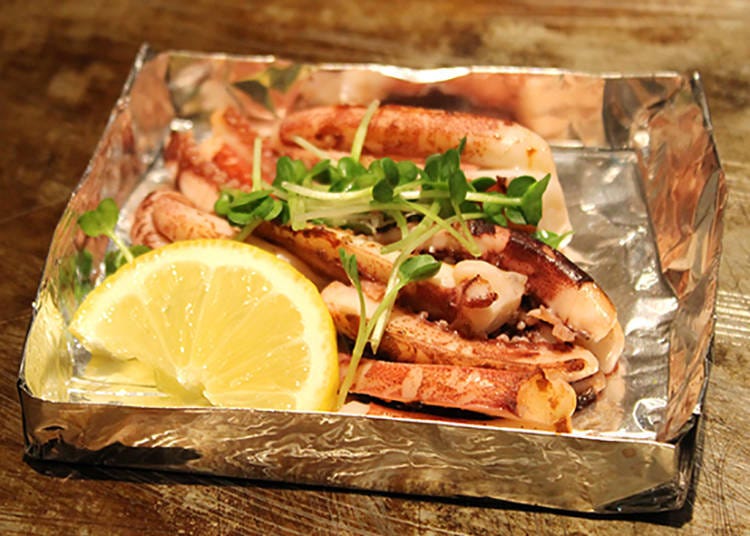 Including the counter, the shop has 28 seats. Lines form on weekends and around dinner, but people tend to eat fast, so you won’t be in line for too long. It’s also a fun place to visit alone or with a group. 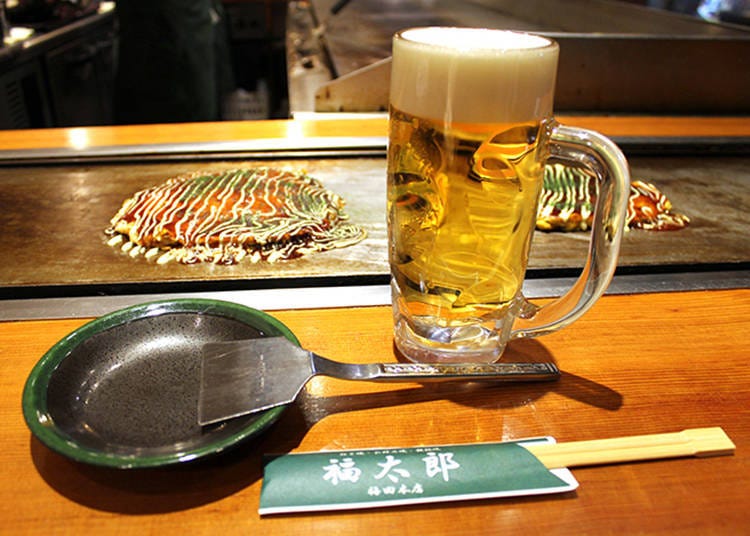 The counter seats are directly at the grill, so the food doesn’t get cold

The sights and sounds of okonomiyaki being made in real time are things to be witnessed. Be careful if you’re bringing children, since the grill gets hot, but there’s plenty of fun to be had – the staff will agree to take photos, so shoot away! 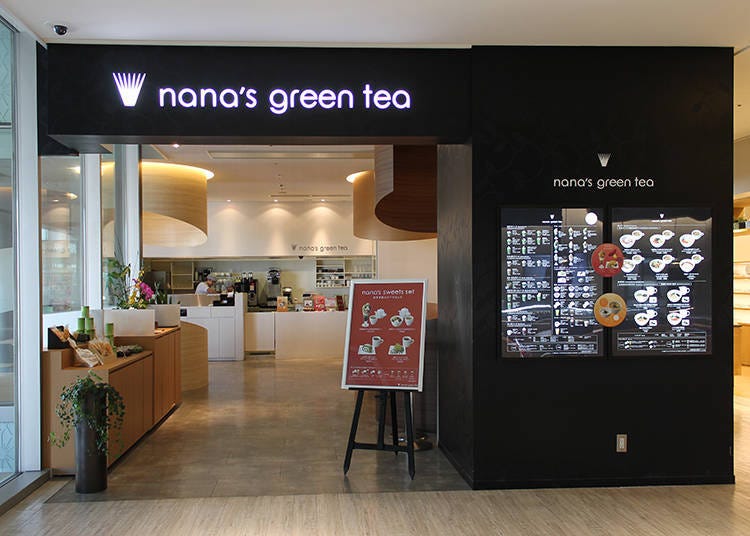 The Japanese café nana’s green tea, with a selection of matcha and green tea, is to be found on the 4th floor of Grand Front Osaka's South Building. Large with 132 seats, it exudes the aura of a modern teahouse. There are booth seats perfect for families and groups, and parfaits and other desserts that make use of matcha to enjoy. The menu is only in Japanese and English, but all of the items have photographs, making pointing and ordering a cinch. 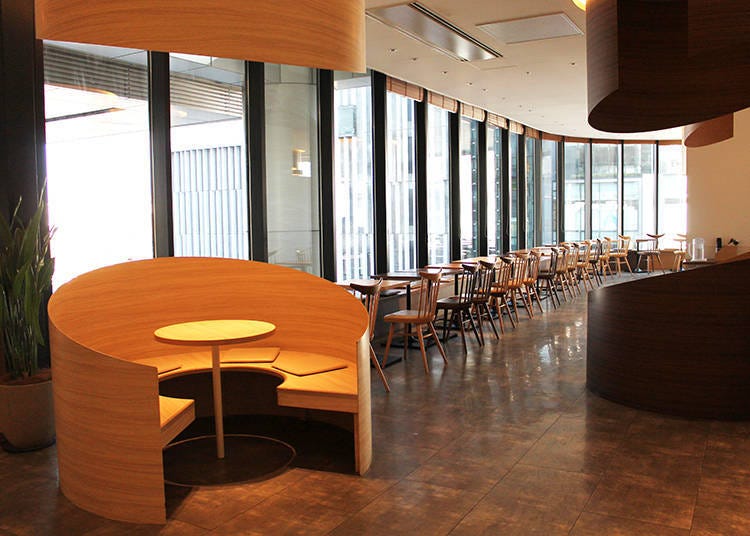 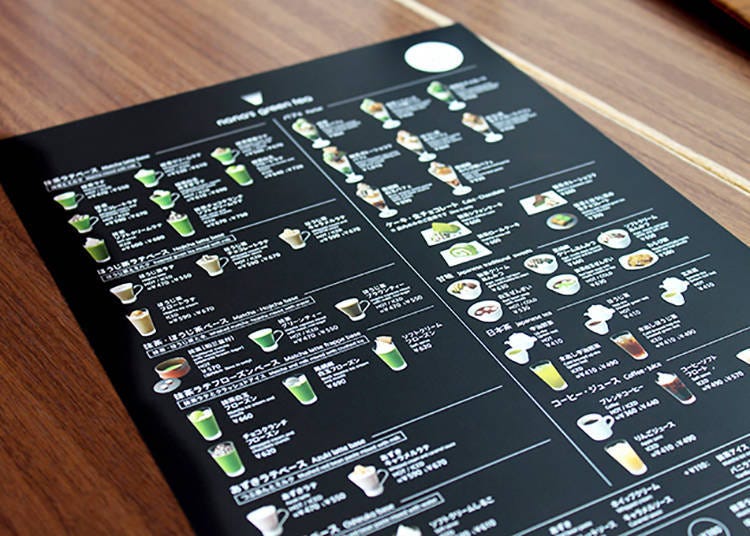 The photos on the menu make ordering easy

The café has a variety of teas and tea-based drinks, most popular of which are the Matcha Shiratama Parfait and Matcha Latte. The matcha used is from Uji in Kyoto, guaranteeing you an authentic taste. With Japanese ingredients such as matcha pudding, shiratama, and red bean paste, the parfait’s fetching appearance has gained popularity on social media, drawing more guests to the café. The Matcha Latte can be had hot or iced, with the iced having a more pronounced matcha taste. 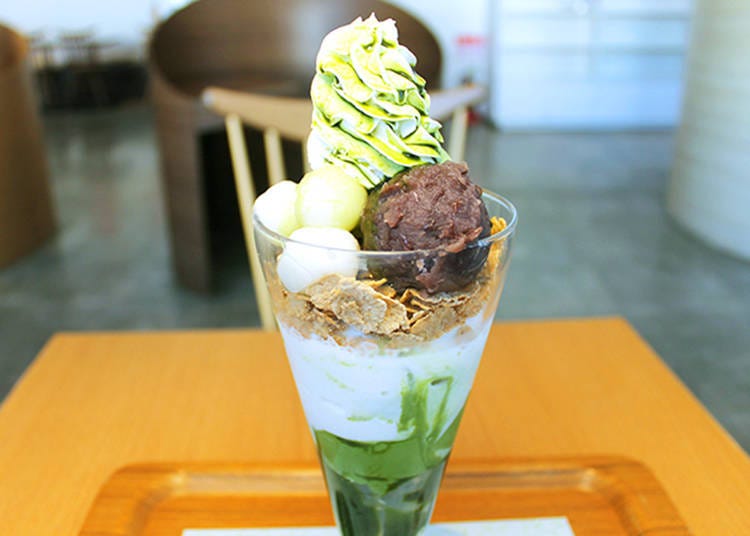 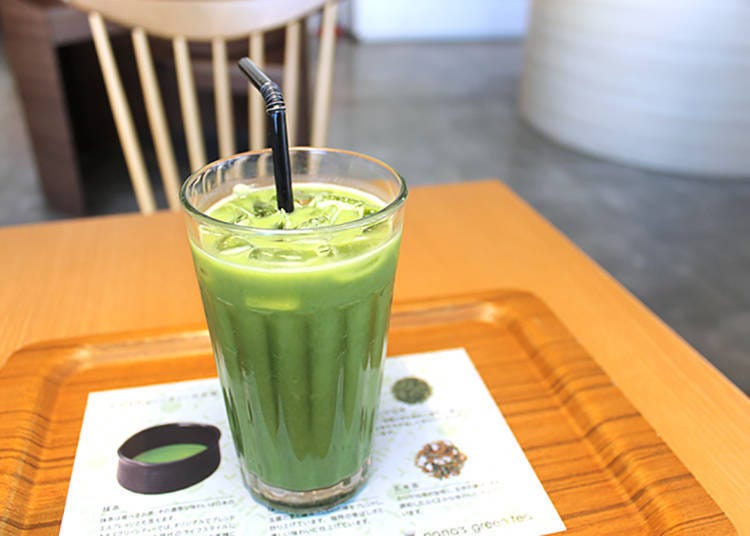 The sweets and drinks aren’t the only popular items at this Grand Front Osaka cafe. The Salmon and Roe Oyako-don (1,060 yen, S 880 yen, tax included) and other food items are available for lunch. There are plenty of seats, too, making this a perfect place to relax in after a shopping session. 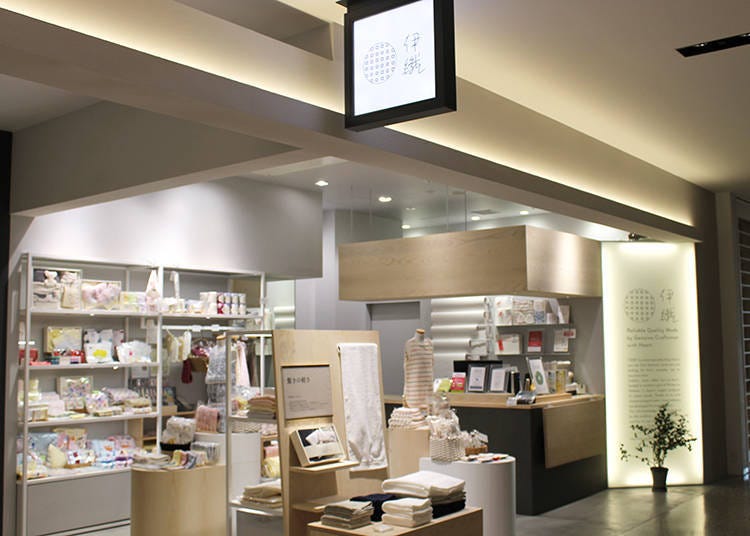 Iori, on the second floor of the Grand Front Osaka North Building, is a shop you can buy the highest quality Imabari towels in. Imabari is known as a high-class Japanese brand, even outside of Japan. Inside, you’ll find towels with all sorts of designs, colors and functions. The most popular ones are the Mt. Fuji and cherry blossom designs. 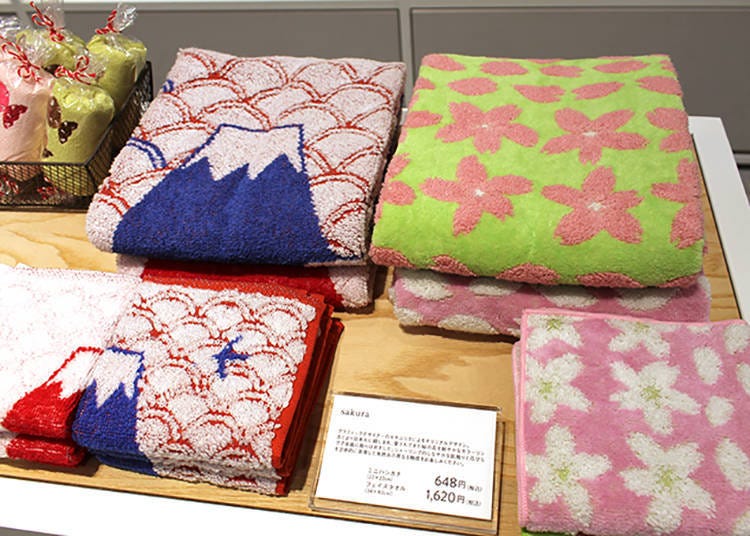 The towel designed after the nature of Ehime Prefecture, “Ehime no Tabimonogatari MIKAN” has a variety of sizes from mini-handkerchief to bath towel, allowing you to collect your favorites. Since they’re so soft and comfortable, plenty of people buy them for use at home. 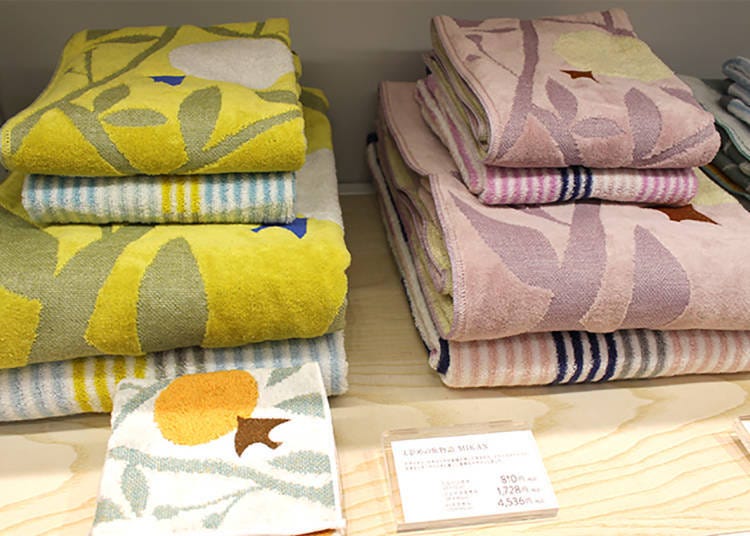 The popular, fast-drying towel “umi” is a Japanese innovation: a towel with a gauze side. There’s also the “Face Mask”, a cosmetic hot mask heated a microwave and put over a facial mask to prevent drying up. There other items that that are just as comfortable as the Imabari towels, such as hair drying gloves and baby bathrobes. 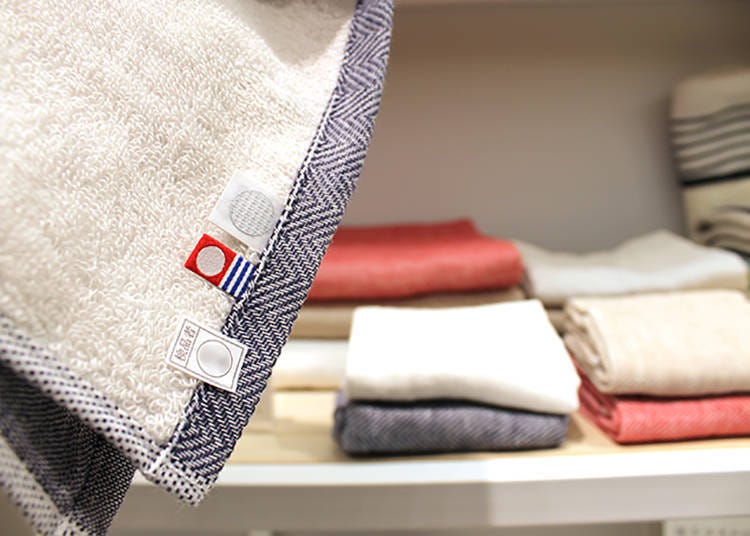 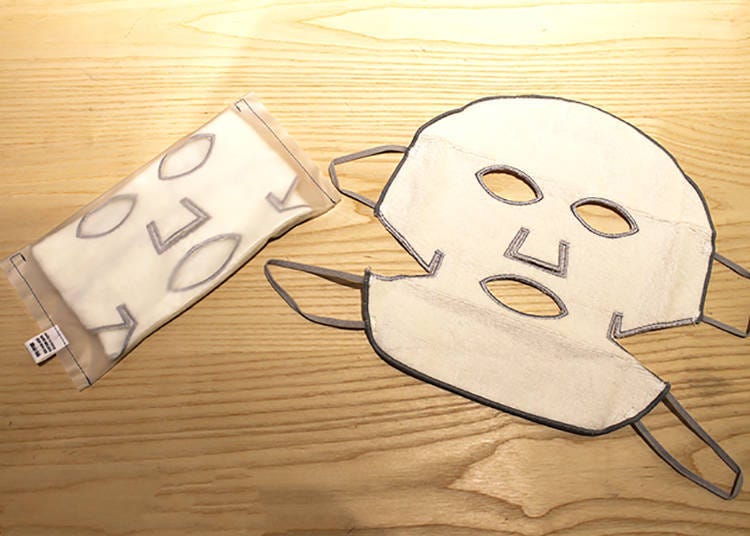 High quality Imabari towels make a great souvenir, or a great addition to your home. There are all sorts of color variations and sizes, so try picking up one you like! 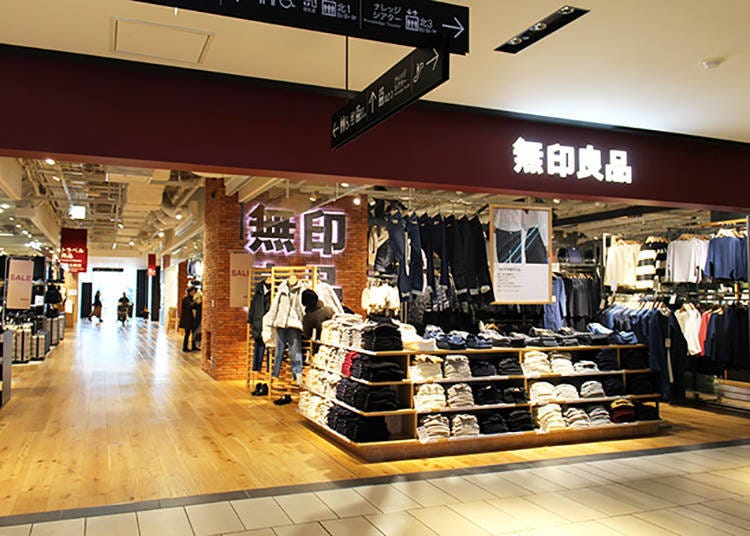 Kansai’s largest Muji establishment is on the 4th floor of the Grand Front Osaka North Building. It’s a massive store with plenty of items, from food to stationery to clothes and furniture. On the fashion side, most popular are linen tops, stoles, and sneakers. Items tend to have a variety of colors, too, letting you pick the one you want. 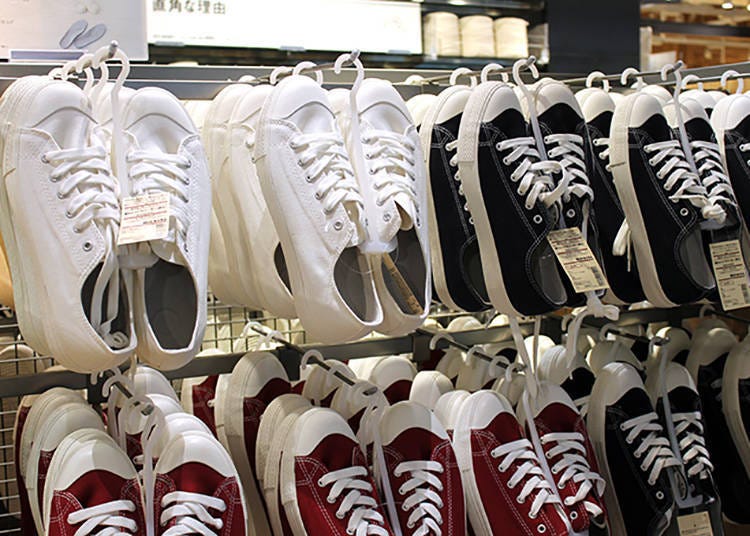 Items comes in a variety of colors

The bright, resilient gel ink ball-point pens are a popular item that draws in repeat buyers. Their ink tubes are replaceable, allowing you to use the pens without waste. 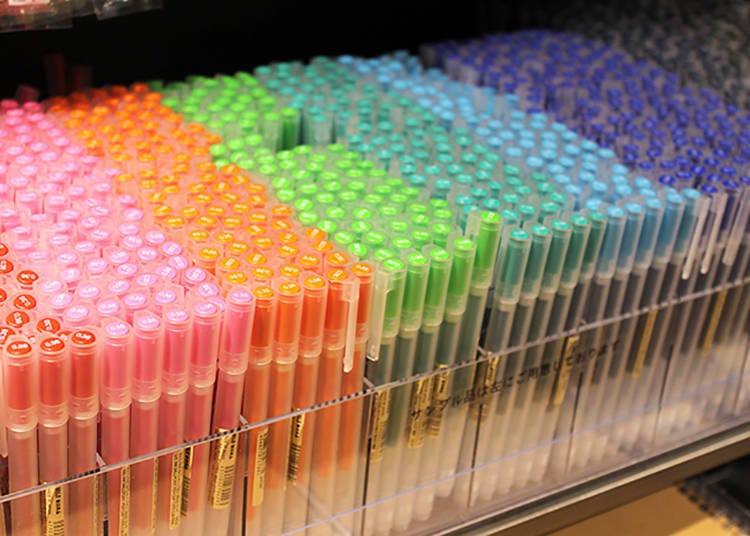 Though Muji Osaka has branches abroad, it has a much greater selection at lower prices in Japan itself. This shop in particular has a tax-free counter where people buy pens, lotion, snacks and other supplies in bulk. The shop also has free wi-fi, allowing you to search the web to help you find what you’re looking for. 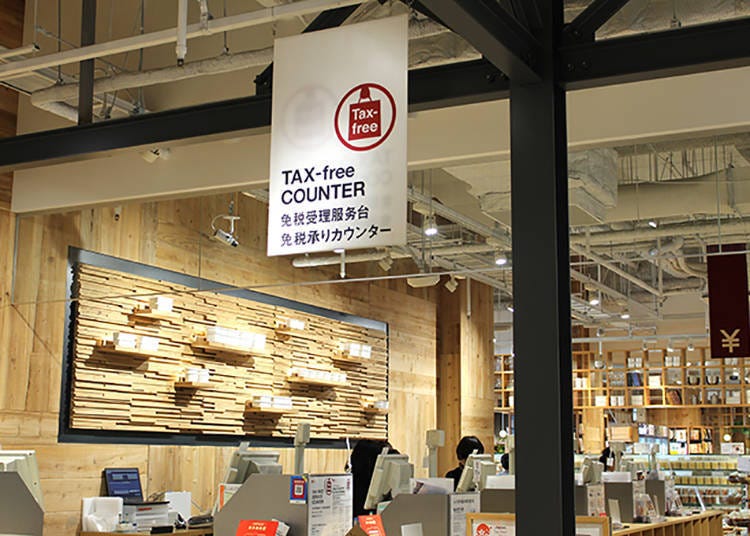 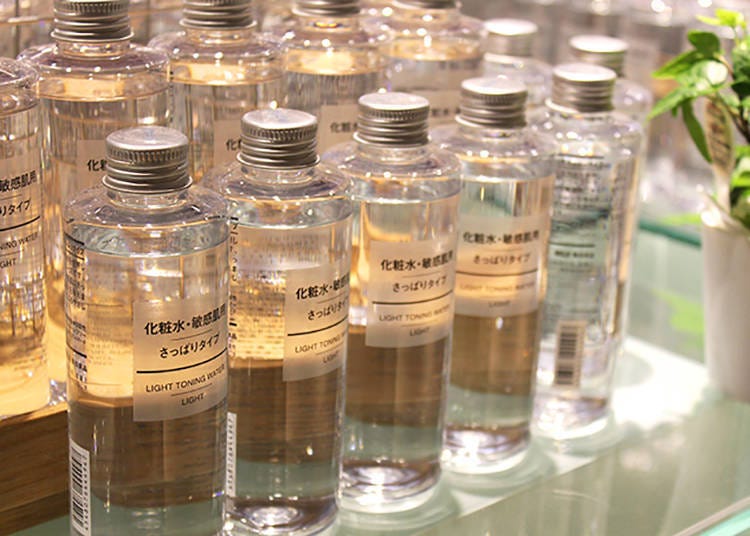 Lotion for sensitive skin: 580 yen (tax included). There are a variety of lotions for different skin types, too

Muji Osaka has a comfortably large, wooden interior that’s easy for lugging your baggage through. It’s the perfect place to buy what you want all at once. 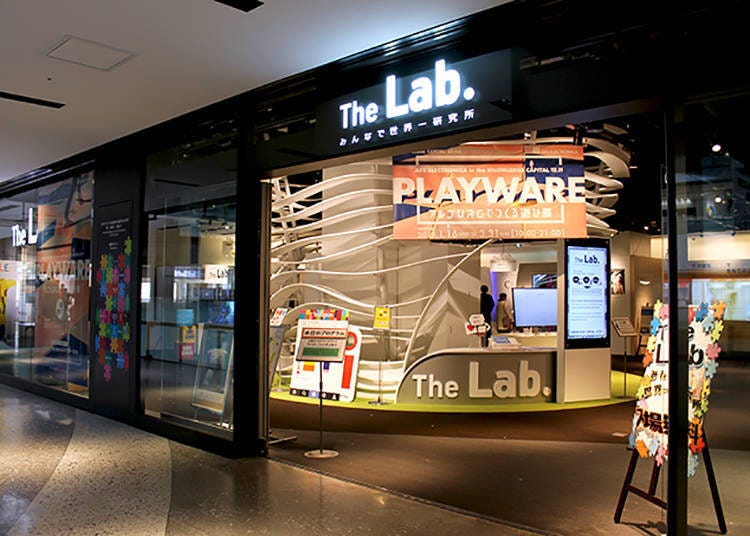 Shopping and food isn’t all that Grand Front Osaka has to offer, either. “The Lab.” on both the second and third floors of the North Building is an exhibition area anyone can enter for free, but is surprisingly unknown.

A variety of companies, schools and research organizations display yet unreleased prototypes there, allowing visitors to experience the latest in Japanese technology. Some of the exhibits don’t have multilingual support, but the floor has expert staff and simple, picture-based explanations, allowing anyone to experience the displays. 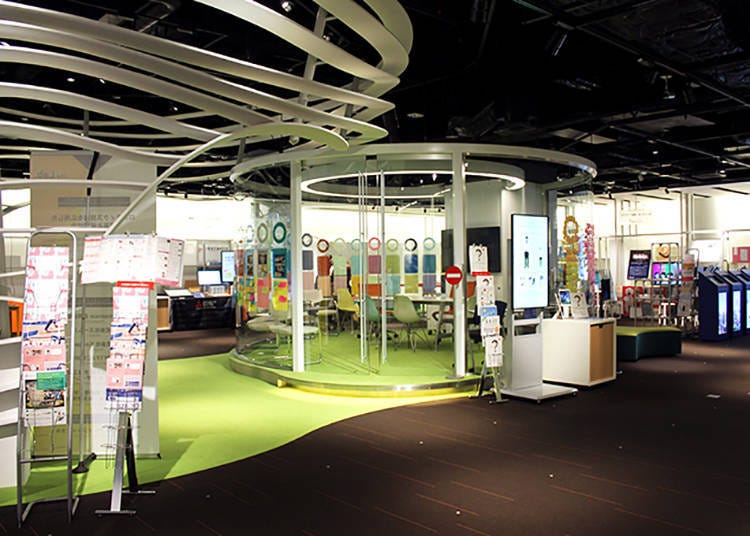 Multiple booths stretching from the second to third floor

One particularly popular booth is the “Virtual Fitting” exhibit, where you can experience wearing a glamorous kimono just by standing there. There are also costumes available for children and men. 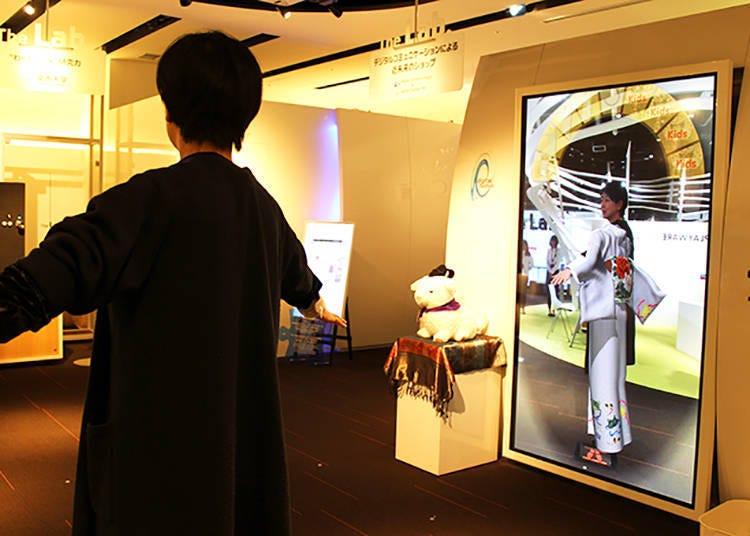 View Paint is an exhibit where the viewer uses a controller to view Vermeer’s famous “The Milkmaid” painting from a variety of angles. The ceiling, not shown in the original painting, was recreated with scholarly supervision, allowing one to take on a completely new view of a classic painting. 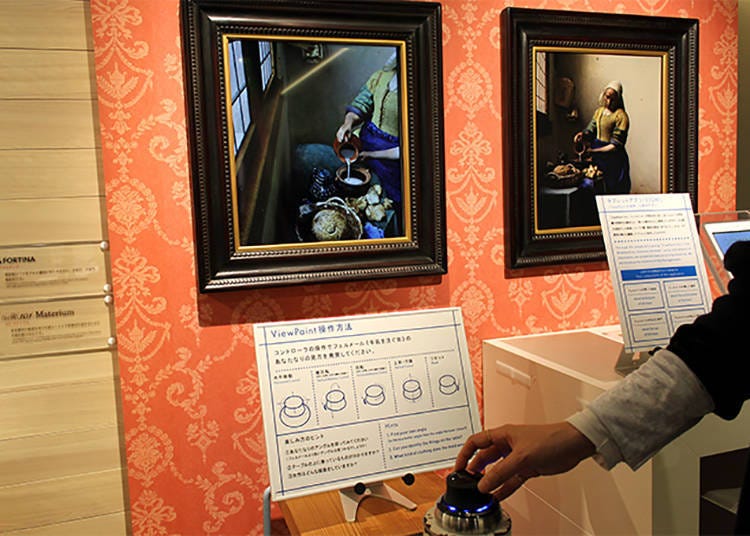 View the painting from a variety of angles with the controller©Rijksmuseum Amsterdam. Purchased with the support of the Vereniging Rembrandt. ViewPaint: Vermeer’s “The Milkmaid” Produced by Toppan Printing Co., Supervisor: Yoriko Kobayashi

Kishiman, the next generation picture book, plays out its story with a large display. It uses projection mapping technology, and kids love the different images with every turn of the page. 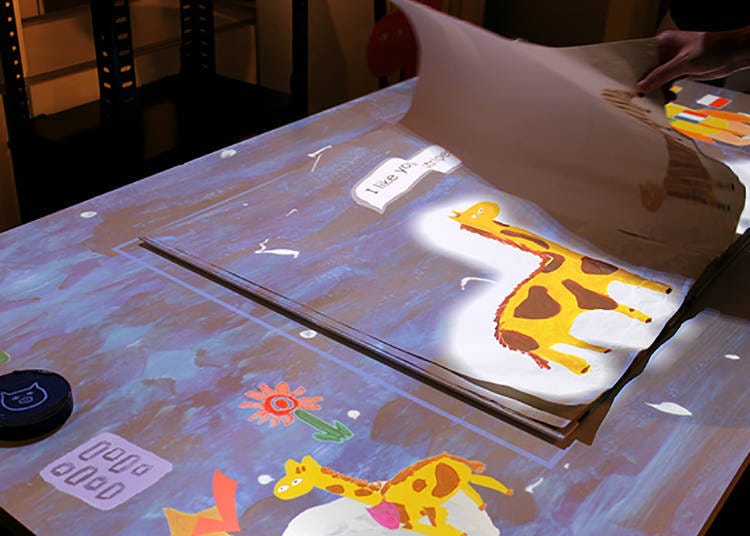 The book is in Japanese, English, Chinese, French, Polish, German, and Thai

“The Lab.” can be visited for absolutely free. After you’ve finished up some shopping or eating, try paying it a visit to enjoy some of Japan’s latest technologies!

Complete Guide to the Osakan Symbol, Tsutenkaku
*This information is from the time of this article's publication.
*Prices and options mentioned are subject to change.
*Unless stated otherwise, all prices include tax.