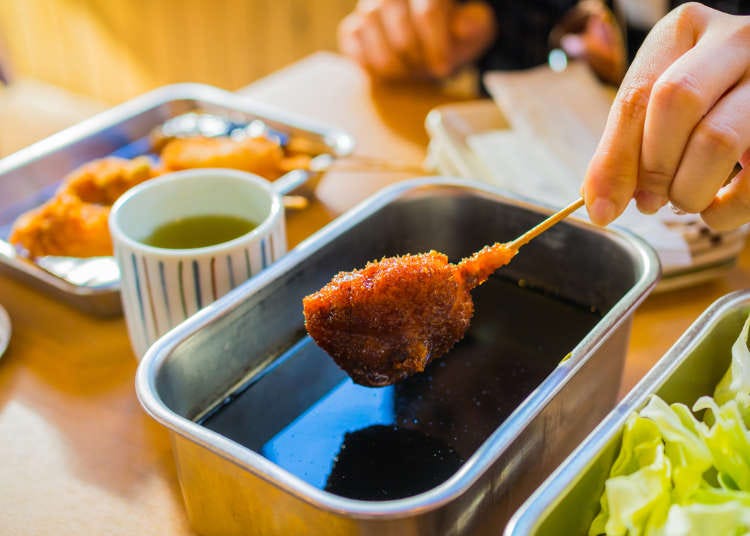 Kushikatsu is one of the classic dishes in Osaka, a city famed for its variety of culinary delights. A deep-fried dish of skewered meat or vegetables cut into bite-sized pieces, it's something you definitely want to try when visiting Osaka.

Before you do, however, you'll want to know a few notes of local etiquette. Buckle in and study up: It's time to learn how to enjoy kushikatsu! 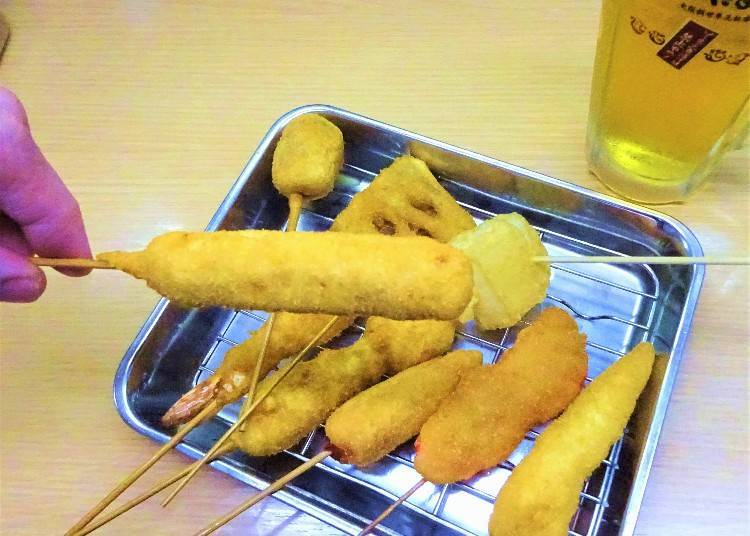 In Japan, any food with a koromo - the crispy coating after frying - is called katsu. Katsu that's on a kushi, a skewer, is hence called kushikatsu. Affordable and tasty with beer or other drinks, they're well-loved in and around Osaka. 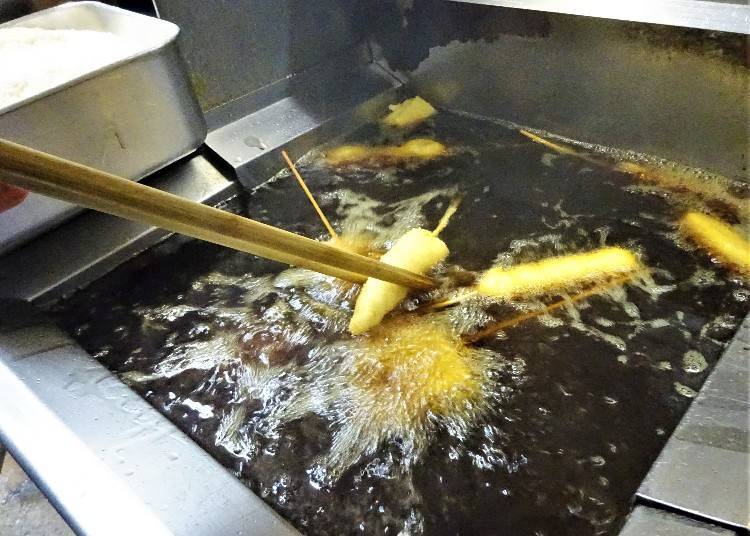 Kushikatsu made by deep-frying skewered and battered food. The “koromo” is usually thin, adding a light crunch to the main ingredient's flavor. 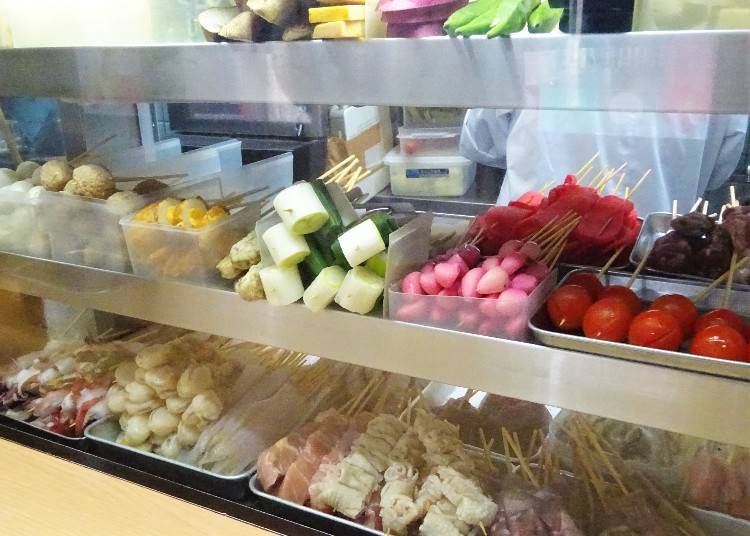 All sorts of things can go on kushikatsu skewers, from the standard beef to seafood, vegetables, and more! And they're all about 100 yen apiece, so no need to worry about the budget!

There are, however, more establishments nowadays that deal in more high-class ingredients: Wagyu beef, cheese, and even desserts. 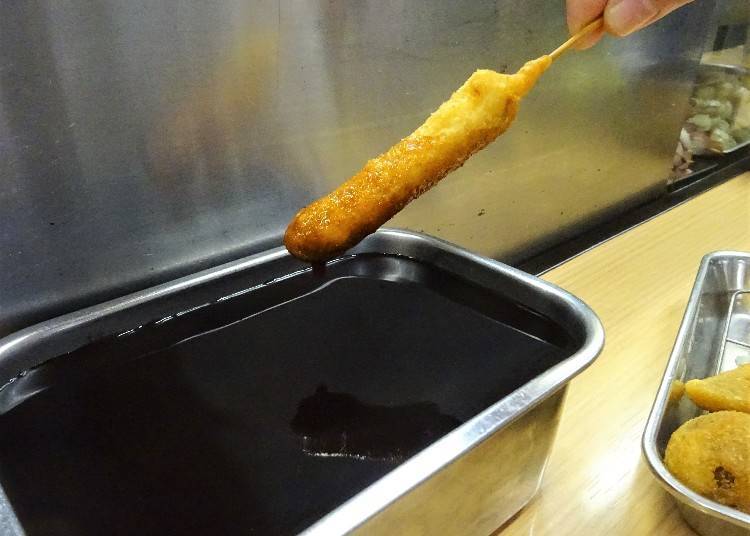 You generally eat kushikatsu by dipping it into sauce. Restaurants generally won't have sauce in bottles, but in a tray like the one pictured above. Now, when dipping it in, you want to watch out for double-dipping. If you do, the staff will warn you about it! 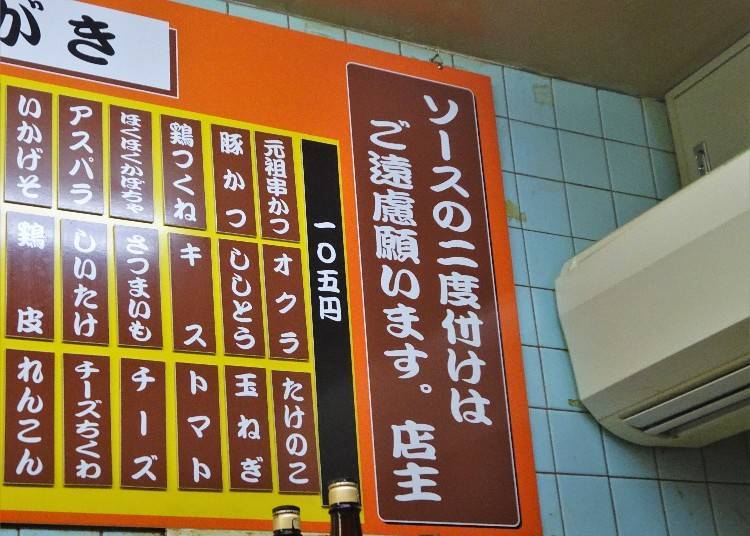 Most restaurants have rules against double-dipping. Why? Well, since the sauces are shared among all customers, the rule exists for hygiene reasons. It's part of the kushikatsu dining etiquette and is a defining characteristic of kushikatsu in Osaka to many.

How to Eat Kushikatsu 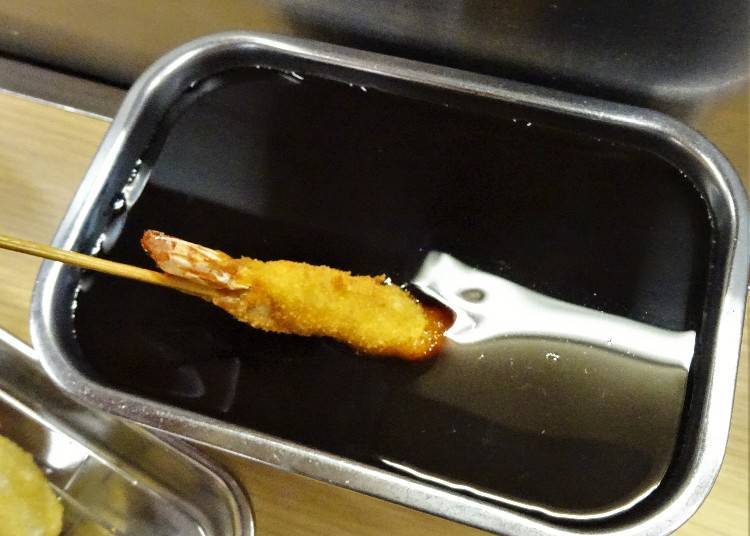 If you want to avoid double-dipping, you want to get a lot of sauce on your first dip. The trick is to lay the skewer down and put it into the sauce at a diagonal angle. This will get the sauce going right down into the core of the katsu. 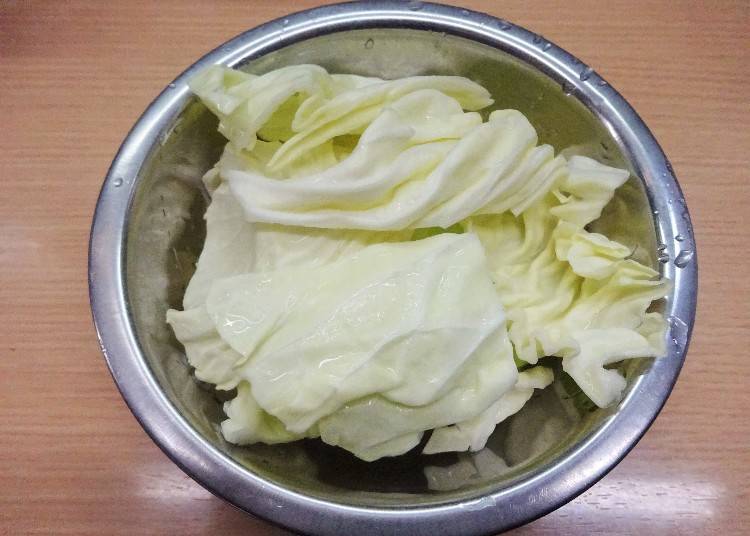 Most kushikatsu joints provide all the cabbage you can eat, absolutely free. While they're meant to clean out your mouth in between kushikatsu chomps, they're actually an essential item for transporting more sauce to your plate. 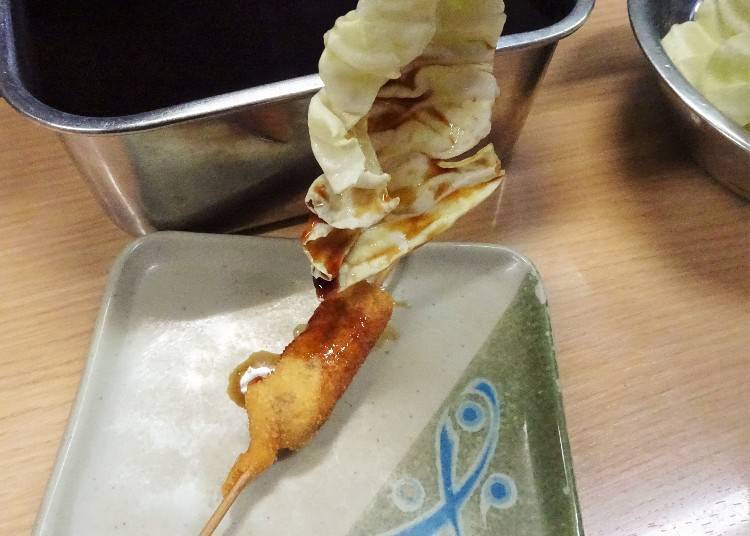 First, scoop up the sauce with it, using the cabbage like a spoon - and there you go, extra sauce without dirtying the tray! Use this technique to have all the sauce you want, but remember that double-dipping applies to cabbage, so use a new leaf each time. 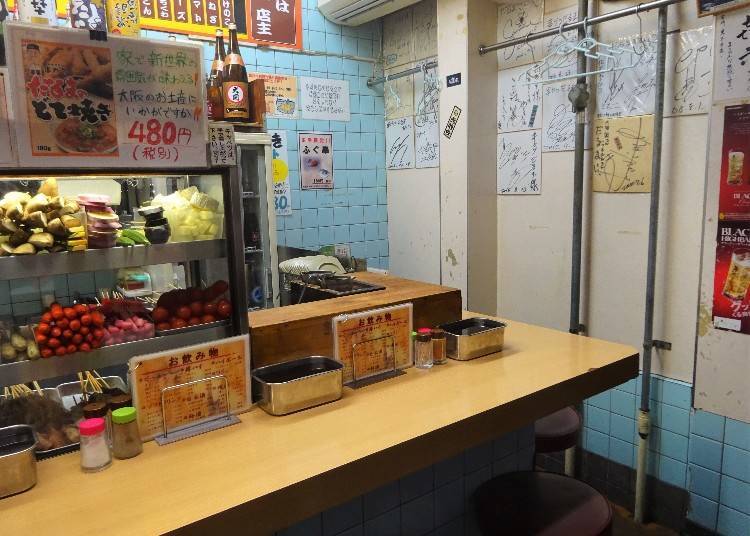 So, what restaurant started the trend against double-dipping? That would be the place we've visited for this article, Kushikatsu Daruma.

It has plenty of branches in the Shinsekai area, known well for its Tsutenkaku tower and less well for the fierce kushikatsu competition.

Each establishment has lines of eager diners, as well as menus in English, Chinese and Korean. Among them, we have to recommend the Sohon branch, in operation for 90 years.

It stands in a cramped alley, with only a counter to house its patrons. It's here that more than anywhere else, you can enjoy an old-style Japanese atmosphere as you munch on your kushikatsu. 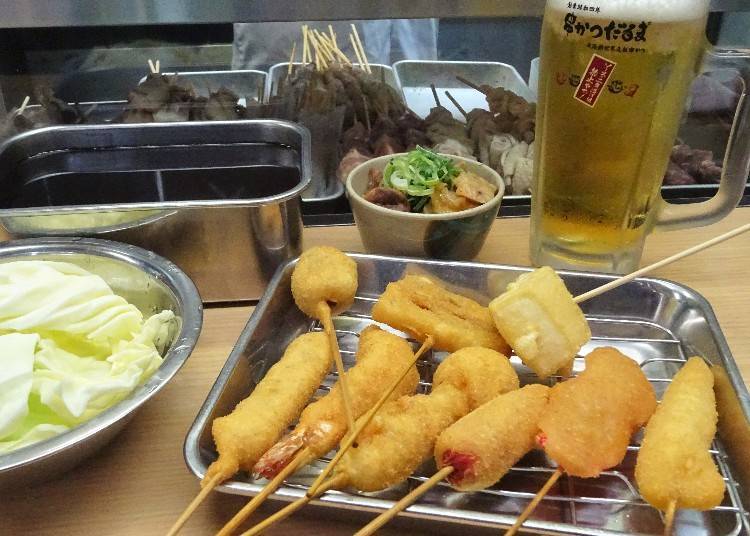 If you come here, you'll want the Souhonten Set. A bargain for the price, it has 9 skewers with ingredients such as beef, shrimp, and sausage. There's some beef tendon with a bit of a sweet, spicy kick to it known as the Doteyaki that comes with it to try, too. Pick up the lager beer of the day, too, as a perfect match to the spicy kushikatsu.

Finally: What To Do With Those Kushikatsu Skewers? 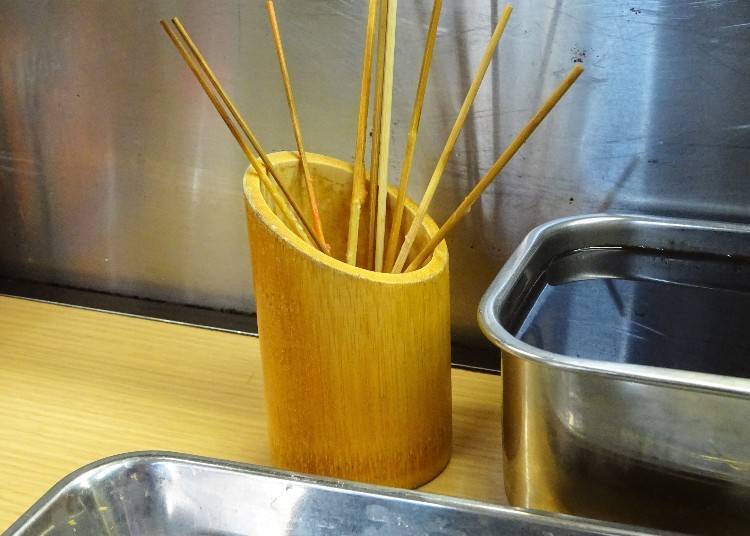 Remember to place skewers you're finished with in the bamboo tube on the table. It gets them out of the way and makes it a lot easier for the staff to clean it up, so remember this bit of etiquette along with the rule against double dipping - mannerly dining will make your kushikatsu experience all the better!

How to Make Your Own ‘Kushikatsu,’ Osaka’s Deep-Fried Specialty! Is Japanese Food Always Healthy?!
Easy Japanese Recipes: Japanese-Style BBQ Skewers!
*This information is from the time of this article's publication.
*Prices and options mentioned are subject to change.
*Unless stated otherwise, all prices include tax.