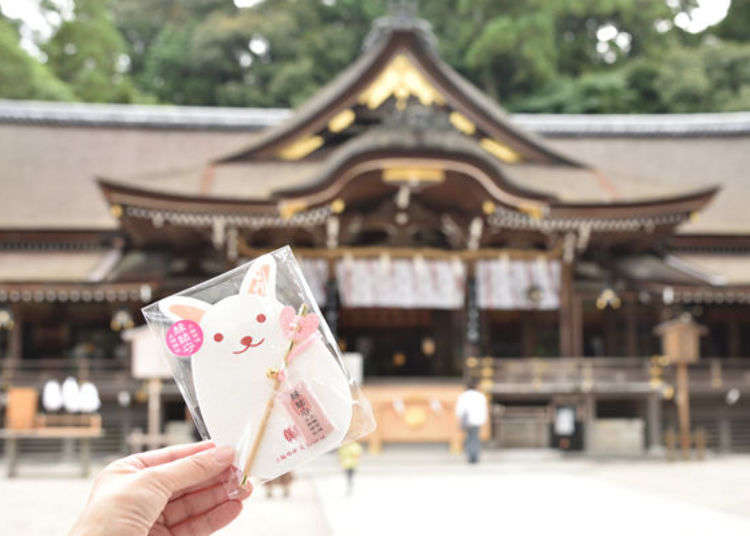 Omiwa Shrine is one of Japan’s oldest shrine that worships Mount Miwa. It is an important shrine that keeps the way of the ancient faith.

The relevant deity is said to have built the nation and is also the guardian deity of all aspects of human life, such as industry, health, brewery, medicine, and transportation. It is also known as a place of strong spiritual power. On top of that, it's also said to bring good luck with matchmaking!

We decided to visit the shrine for a spiritual connection.

Omiwa Shrine is Japan’s oldest shrine that is mentioned in “Kojiki” (Japan(s oldest historical record) and “Nihon Shoki” (Japan’s oldest chronicles). Omononushi-no-kami appeared in front of Izumono-no Okuni-no-nushi and requested to be worshiped in Mount Miwa and was enshrined there.

Since the enshrined deity is in the mountain, the shrine doesn’t have a honden (main hall), and from ancient times people directly prayed to Mount Miwa. At Omiwa Shrine, worship has been conducted before shrine buildings were used, and the original form of worship has been handed down. 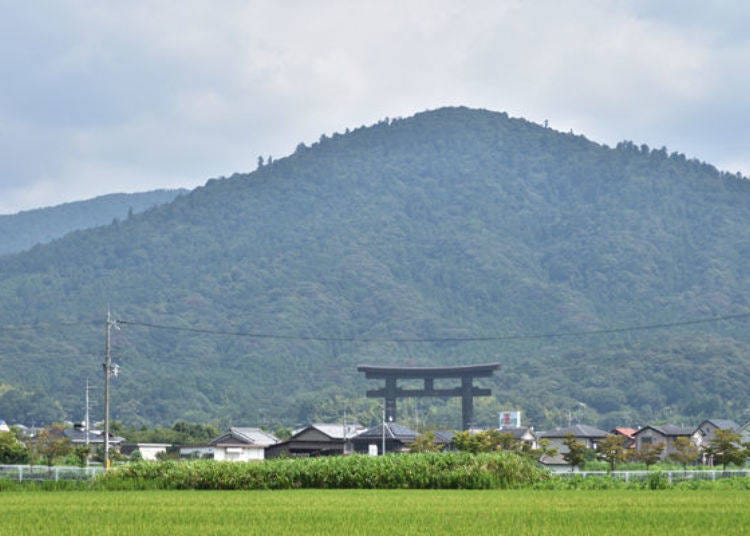 From JR Nara Station, it takes about 30 minutes to reach JR Miwa Station, which is the closest station to Omiwa Shrine. It takes about 5 minutes on foot to reach Ni-no-Torii from the station. 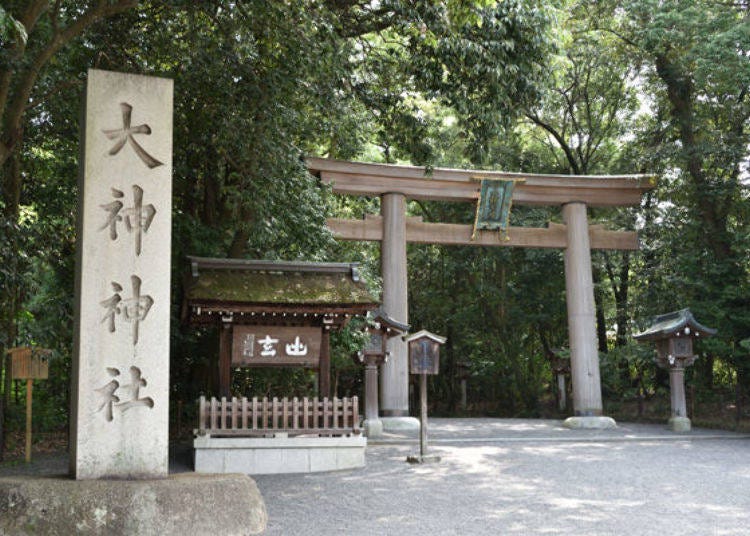 Go through Ni-no-Torii to enter the sacred grounds

Proceed through the path surrounded by trees to reach the shrine.

The place is filled with sacred powers, and you can feel the air change around you once you step through the torii. 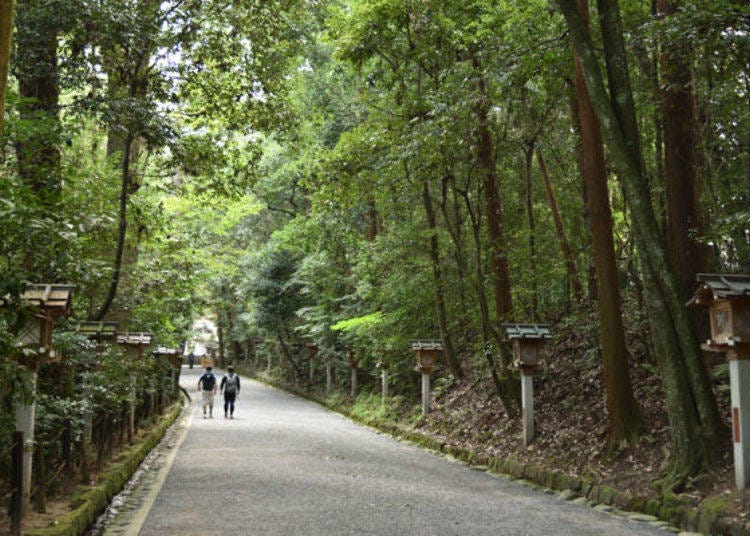 While walking along the long path leading to the shrine, if feels like your body is being cleansed. The center of the path is for deities, so make sure you walk on the sides

Cleanse your mouth and hands at the Temizusha along the path and enter the hall of worship. 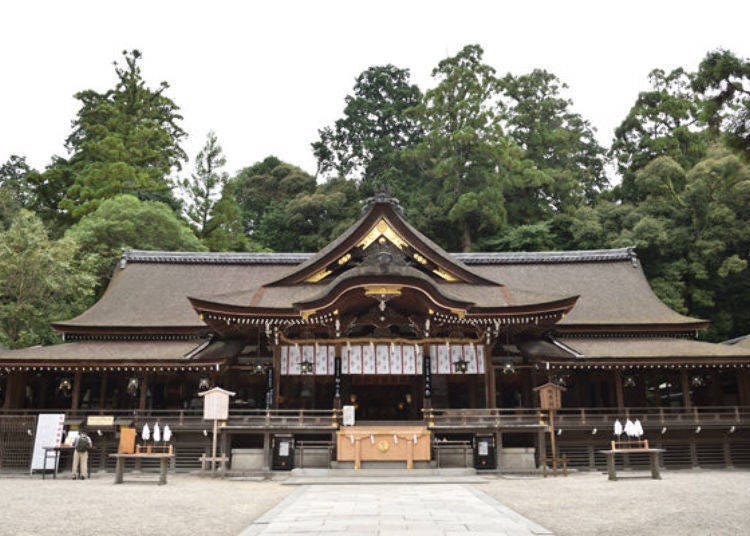 The Hall of Worship is designated as a national important cultural property. It was built in the Kamakura period, and the current building was rebuilt during the Edo period by the 4th shogun of the Tokugawa dynasty, Tokugawa Ietsuna.

Omiwa Shrine doesn’t have a main hall, so you will make your prayer thought he Mitsu-torii behind the hall of worship.

Pray to the Cute Rabbit for Luck in Relationships!

On the large grounds, there are many shrines that bring good luck such as brewery, business, health, entertainment, education, and others, but we strongly recommend this relationship fortune spot!

Go back towards Ni-no-Torii from the hall of worship and go towards the “Meoto Iwa” (husband and wife rocks). Two rocks are snuggled together. The miraculous iwakura (rock where a deity is enshrined) is said to bring good fortune for matchmaking, fulfillment in love, and a happy marriage. 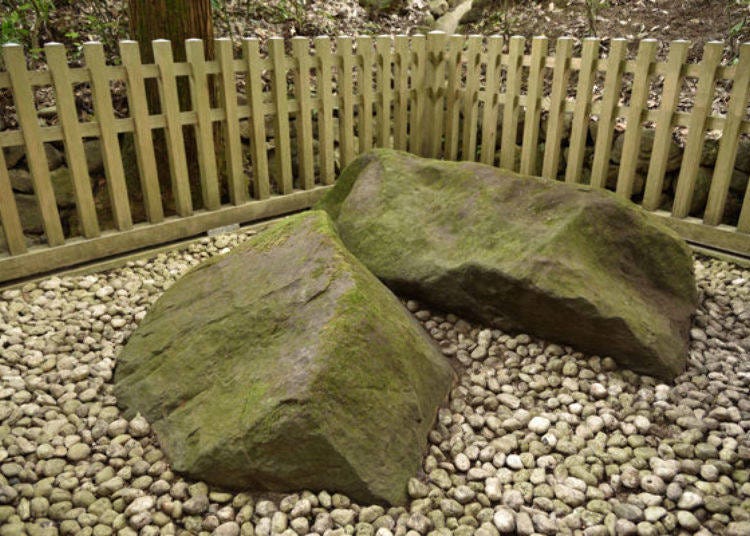 Meoto Iwa. You can make a prayer through the fence

These rocks are also related to the legend of the “red thread of fate.”
It is said that “the person you are connected with a red thread is the person of your fate,” and the story of the red fate is listed in “Kojiki” Japan’s oldest historical record.

Long ago, a handsome man would visit the beautiful girl Ikutamayoribime at night. The two would fall in love, and the girl became pregnant. To figure out who this man was, the surprised parents told their daughter to put red dirt on the floor and pierce the helm of the kimono with a needle threaded with a spool of hemp thread. In the morning the girl followed the thread covered with red dirt and arrived at Mount Miwa and learned that the man was Omononushi-no-kami.

The thread with red dirt would lead you to the person of your fate and from here the “red thread of fate” started. It’s quite a romantic story! 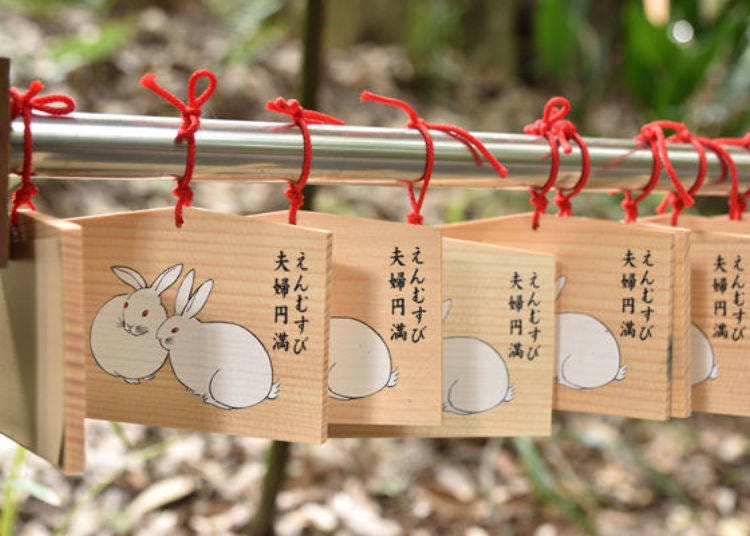 Near the “Meoto Iwa” are ema (votive pictures) (500 yen) with “matchmaking and happy marriage” written on it that are tied with a red thread. Write your wish on the backside and tie it up. You can purchase the ema at the conferment place.

The ema has a drawing of two rabbits, and rabbits have a deep connection with Omiwa Shrine. The annual festival for Omiwa Shrine “Ogano Matsuri” started back in the 8th year of Emperor Sujin on the day of the rabbit. For this reason the rabbit became a zodiac that is deeply related to the gods, and to this day every month of the day of the rabbit, a ceremony is held.

Also Omononushi-no-kami and Izumono-no Okuni-no-nushi are the same deities, and with the famous legend of Okuni-no-nushi saved the Inaba no Shiro Usagi (Hare of Inaba), the shrine has a deep connection with rabbits.

At the Sanshuden on the left side of the hall of worship, there is the cute “Nade Usagi” (petting rabbit). 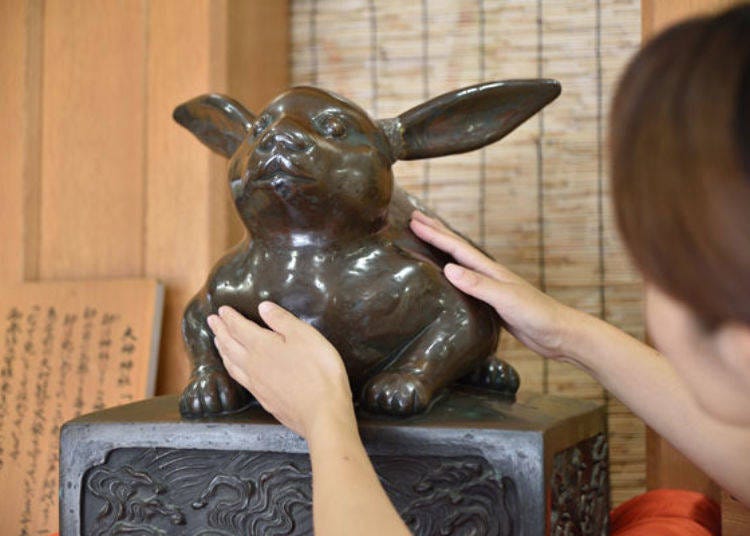 The cute Nade Usagi with the ears sticking out

By rubbing the rabbit it is said to increase your luck and rubbing the area where your body hurts, it will heal you. Since it has been rubbed by so many people, it is very shiny.
I wanted to increase my luck, so I petted it with both hands.

The conferment place has many cute rabbit themed charms. 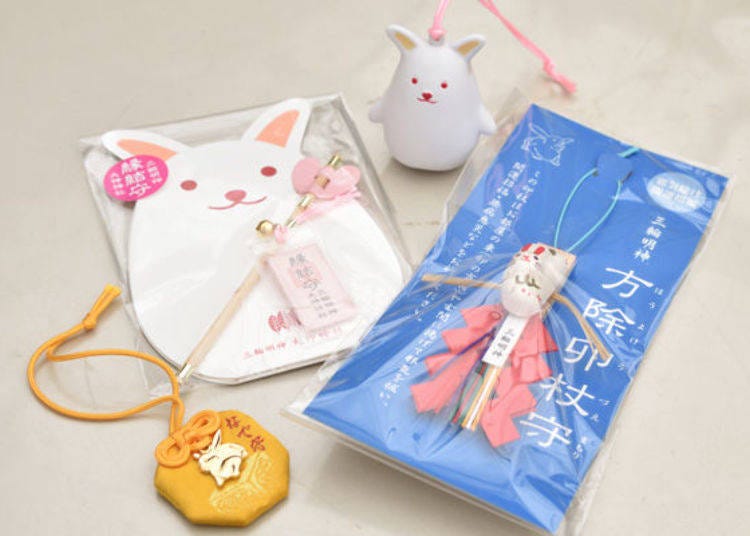 The “Nade Mamori” where you pet to rabbit for your wish to come true, will fit in your palm and easy to carry.

The “Embusbi Mamori” is a cute charm that can also be placed in your room as a decoration.

The “Hoyoke Uzuema Mamori” should be placed towards the east (direction of the rabbit) or the entrance to cleanse evil spirits, and you should pray for good luck and no illness.

Into Mount Miwa. Gain Power through Worship Climbing Near God

We strongly recommend visiting Sai Shrine, about 5 minutes on foot from Omiwa Shrine. This shrine worships the god of healing. 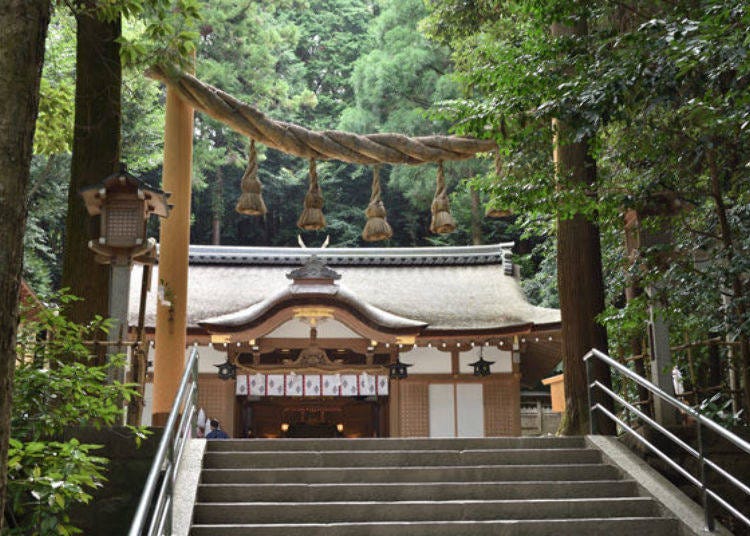 The hall of worship of Sai Shrine

You can reach the worship climbing entrance to holy Mount Miwa, where the deity is enshrined, from the shrine grounds. 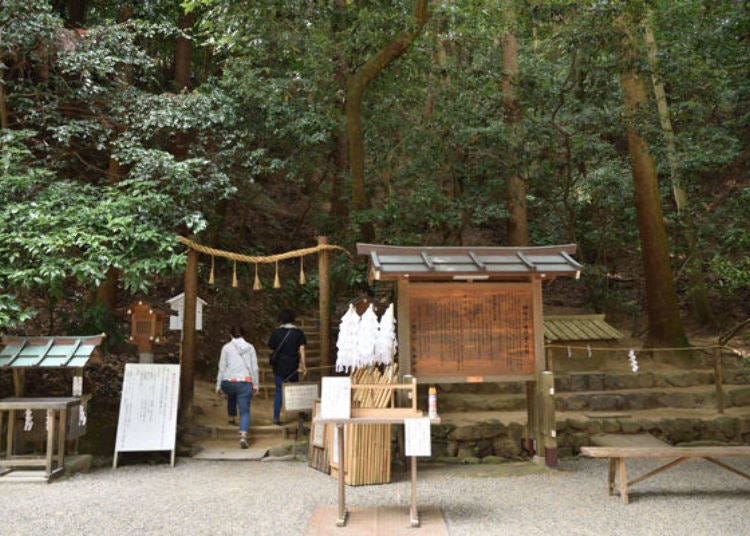 Mount Miwa with the iwakura where god descends. It used to be an off-limit mountain with limited entry, however after the Meiji Period they allowed worship climbing as long people followed the rules.

After the reception, put on the Mount Miwa worshiper sash and use the haraegushi to purify yourself and enter the mountain. 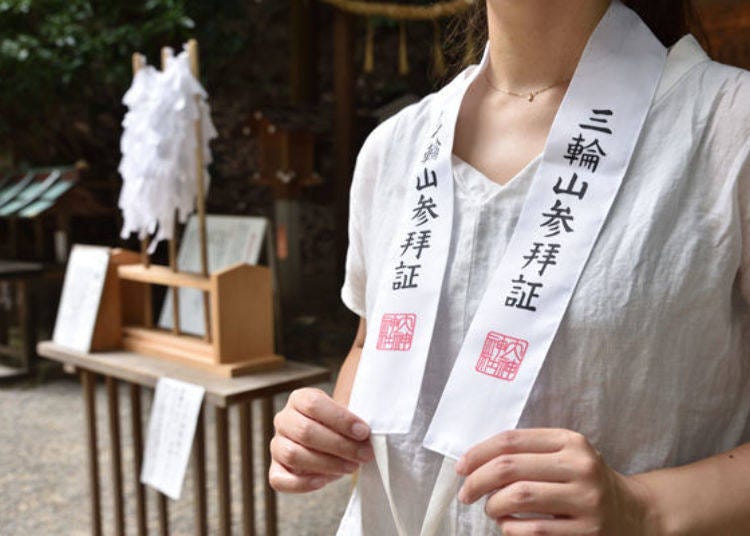 Originally you are supposed to register wearing tradition white clothing, but by using the sash you can enter the mountain. The haraegushi can be seen in the background. Purify yourself and climb carefully 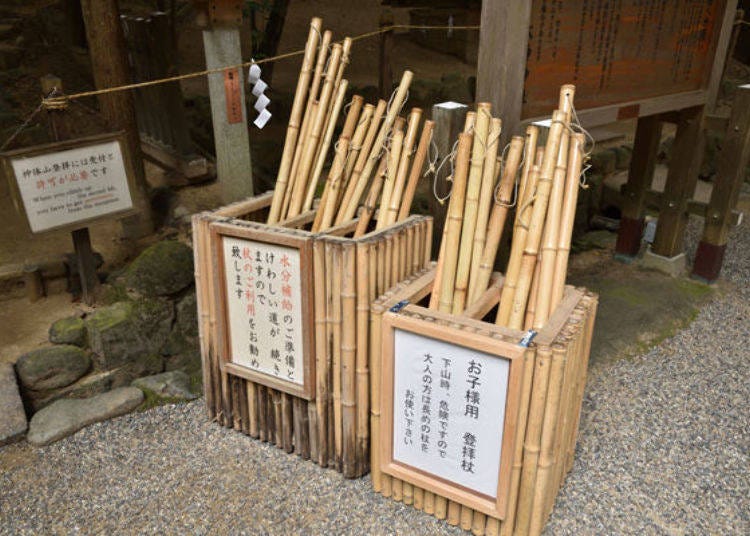 They even have walking sticks!

The holy mountain is the strongest place of spiritual power. Remember you are not going hiking, you are entering a holy site. Water is only allowed for hydration, and cameras are prohibited, what you see in the mountain must be kept a secret.

It takes about 2 to 3 hours to climb the mountain, but here you can look into yourself and while surrounded by spiritual powers.

After you descend, have a drink of the holy water from “Yakuido,” located behind the hall of worship, it is said that it cured diseases since ancient times. You can feel the water spread through your body with each sip. 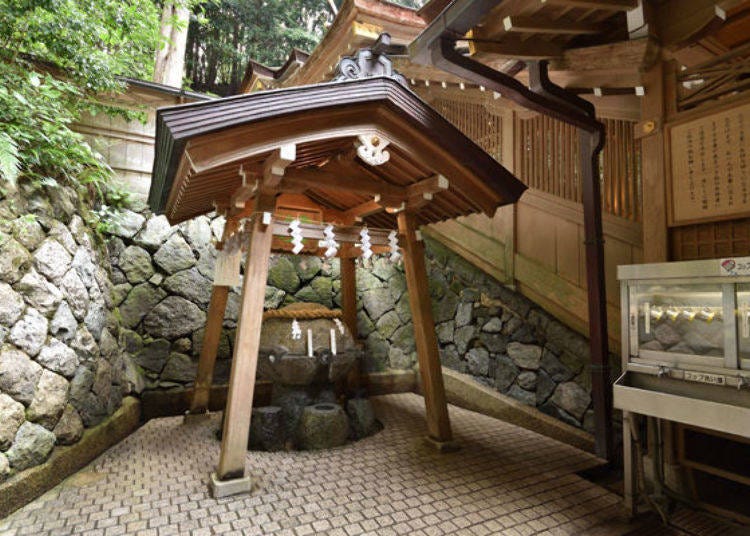 The holy water from “Yakuido” flowing from Mount Miwa 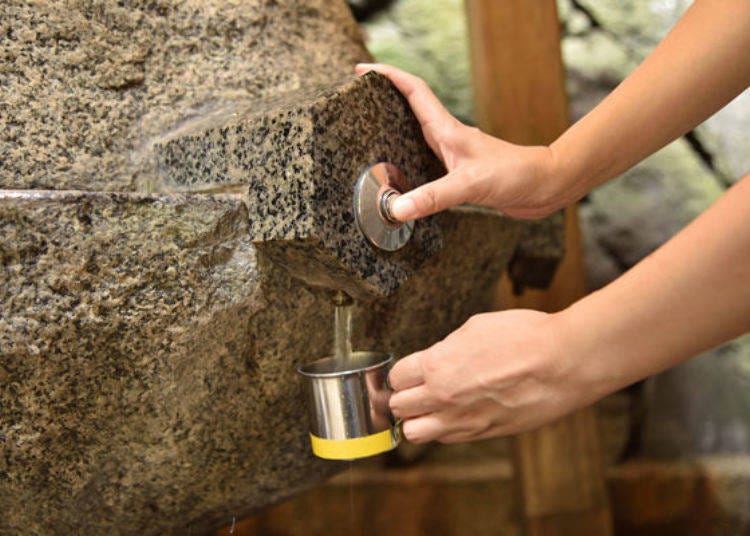 You can drink as much as you want with the provided cup. The water is smooth and soft

There are many comments regarding Mount Miwa, such as “I experienced something mysterious,” or “I couldn’t reach the destination unless I was called upon,” these comments are proof that it is a true place of spiritual power.

It is a place with cute charms, good luck for matchmaking, and a place you can receive spiritual powers.

We strongly recommend people to visit if you are looking for your new match! 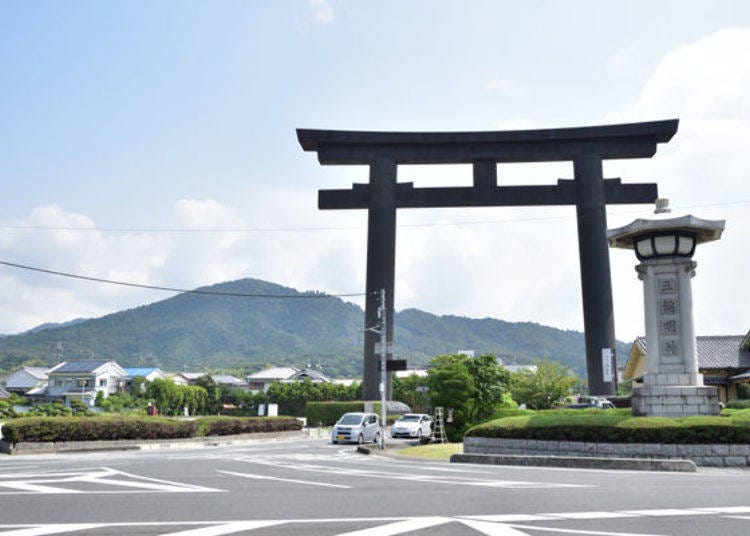 The Otorii is one of Japan’s largest torii with a height of 32.2m and 23m between pillars.
*This information is from the time of this article's publication.
*Prices and options mentioned are subject to change.
*Unless stated otherwise, all prices include tax.