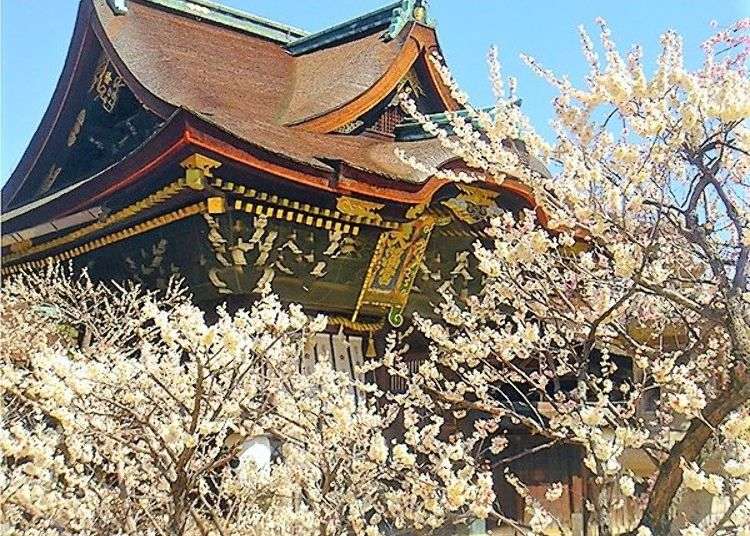 Kitano Tenmangu Shrine in Kyoto was built in honor of Sugawara no Michizane, revered in the Shinto religion as the god of learning. The shrine is renowned for its gorgeous plum blossoms which bloom from the beginning of February to the end of March. There are plenty of other points of interest in the grounds as well as the plum blossoms, and today we’ll tell you about some of these.

50 varieties of plum blossom: 1,500 trees blooming in competition with each other!

When Sugawara no Michizane was exiled to Dazaifu, he sang a poem as he bade farewell to the plum trees that bloomed in the garden. “When the east wind blows let it send your fragrance, oh plum blossoms; although your master is gone, do not forget the spring.” Sugawara no Michizane is worshipped here at Kitano Tenmangu shrine and throughout the country there are as many as 12,000 shrines in his honor. However, this is the original Tenjin shrine. It has been famous for its beautiful plum blossoms from ancient times. Many worshippers come to visit from early February to the end of March. 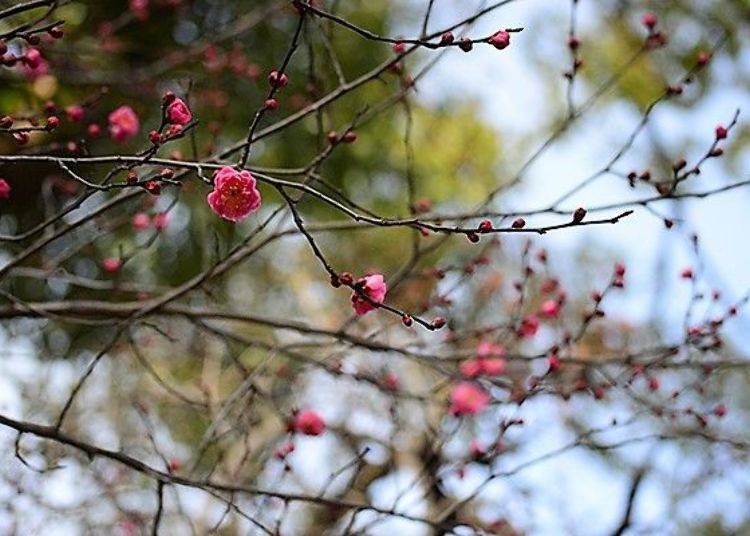 Different plum tree varieties are planted over an area of 66,000 sq meters. There are 50 varieties with around 1,500 trees in total. The different varieties start to bloom after the New Year and carry on until around the middle of March. There is the early blooming Kankoubai, for instance, or Tsuki no Katsura, which has a pale blue green tinge to it, or the hard to find Kuroume. 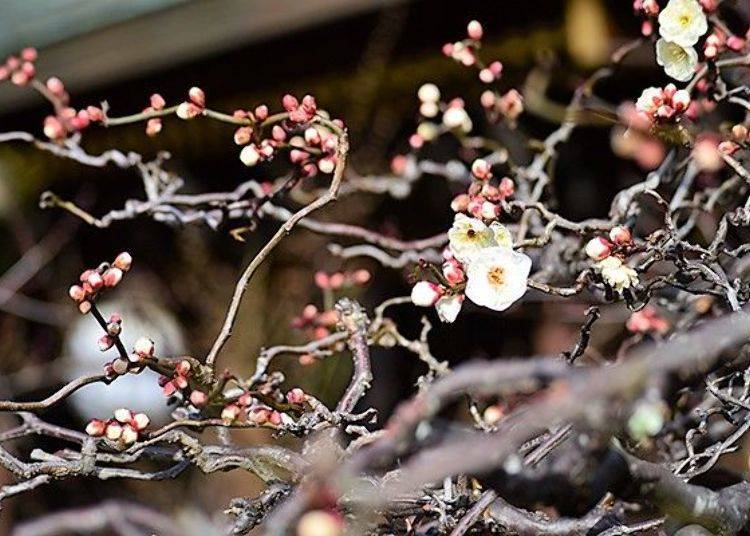 ▲Unryu ume blooms round the back of the Main Hall

Let’s take a closer look at Kitano Tenmangu Shrine, with its array of gorgeous plum blossoms!

Highlights of Kitano Tenmangu Shrine: the birthplace of the Tenjin faith 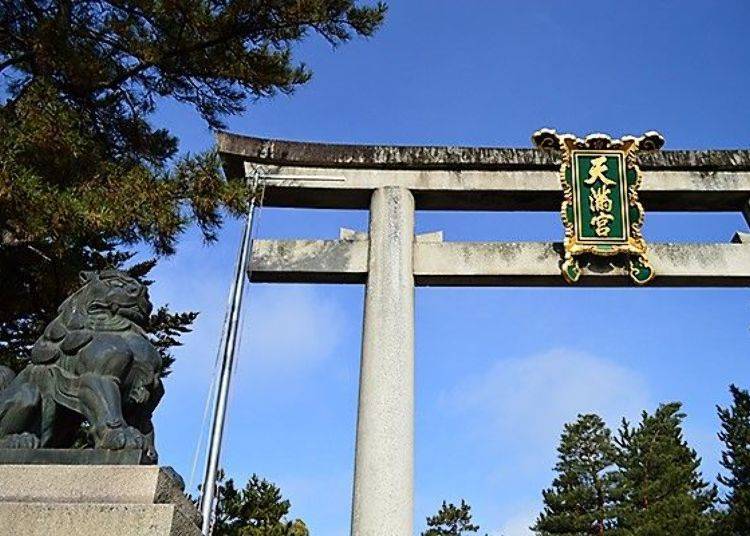 Tenmangu Shrine was built in 947 and dates back to the middle of the Heian period. Ayako Tajihino, Michizane’s nurse, is said to have founded this place in his honor.

Michizane was devoted to his studies from childhood onwards, and has left behind many wonderful Japanese poems and several volumes of Chinese verse. As a scholar he was active in the politics of the time, but suffered a reversal of fortune under the Fujiwara family and was exiled to Dazaifu. Various legends of his achievements and the suffering of his later life came to light after his death. This gave rise to the Tenjin faith, which became established throughout Japan. Nowadays, Michizane is revered as a scholar and a statesman, and is seen as a purifying force for good. 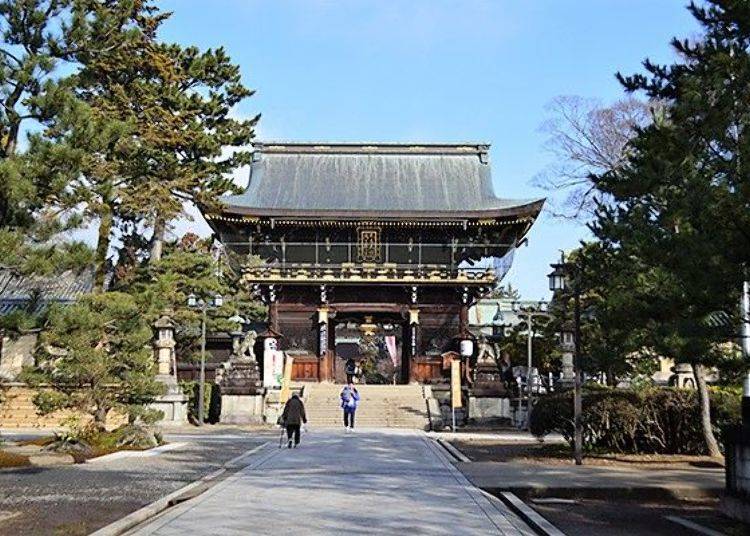 As you pass through the torii gate and walk for a short distance, the Romon comes into view. It’s a huge tower gate, a magnificent and imposing structure from the Momoyama period. It’s known for the “jumbo ema” (votive tablets) that are put up here. 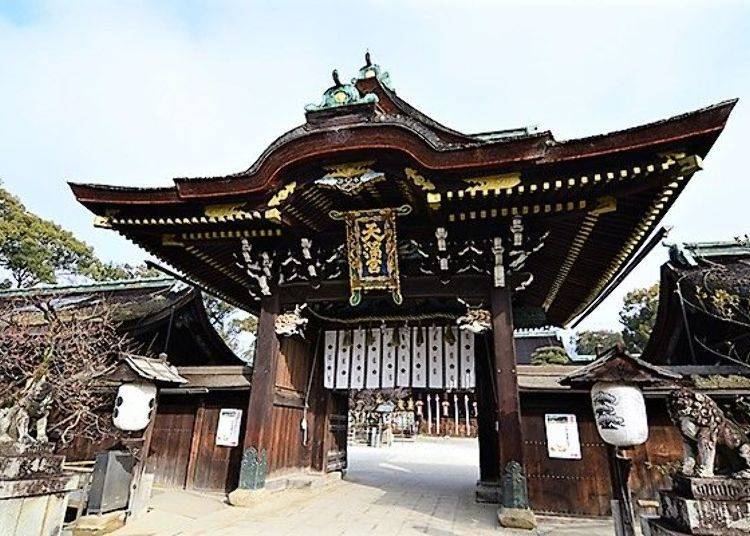 The next thing to see is Sankomon (literally “Three Light Gate”). This is an intermediate gate standing between the Romon and the Main Hall. It is also a Momoyama-style structure similar to the Romon, and is a famous symbol of Tenmangu shrine. It’s designated as an Important Cultural Property. 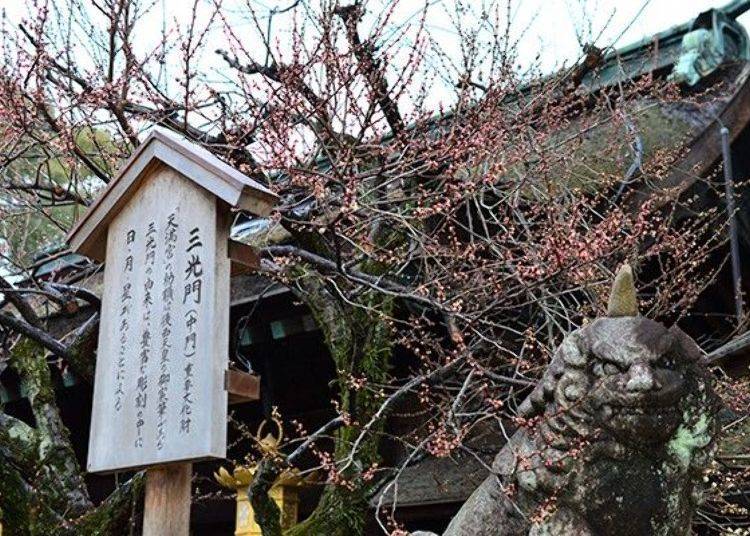 The “three lights” referred to here are the sun, moon and stars. The sun and the moon are carved into the woodwork, but there is no carving of a star here. It’s said that the reason for this is that when one looked up from the Taikyoden (Council Hall) where the imperial court used to be, the North Star could be seen shining brightly directly over the gate. That’s why, according to legend, the name of this gate is “Sankomon Without a Star.” It's counted as one of the Seven Wonders of Kitano Tenmangu Shrine. 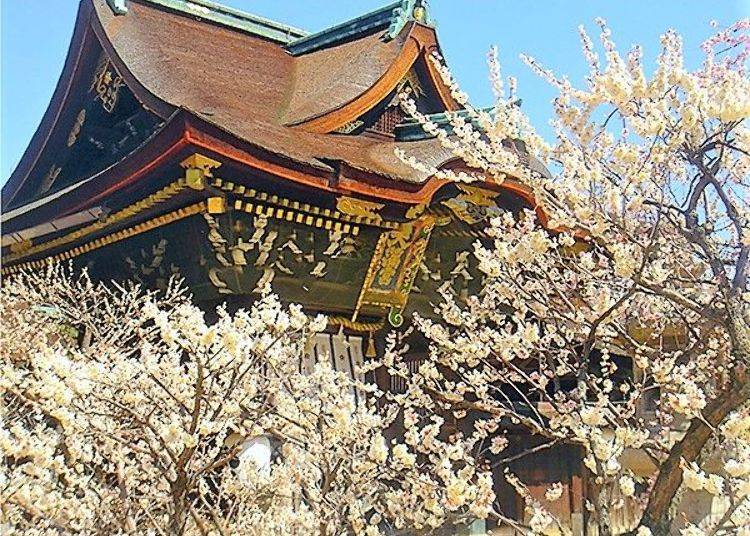 ▲Sankomon during the peak blossom season 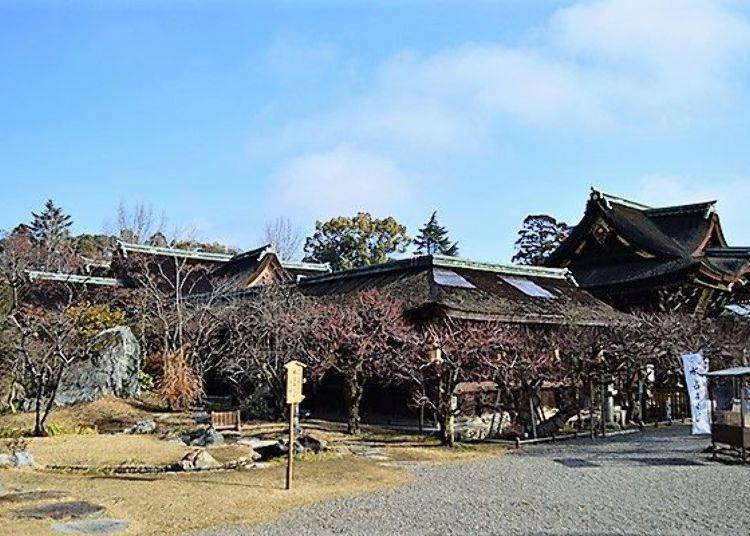 Here is a view of the Kobaidono Funade no Niwa next to Sankomon. The buds were just starting to color at the time of writing (February 2, 2018). The best time to see the garden is around the beginning of March every year. 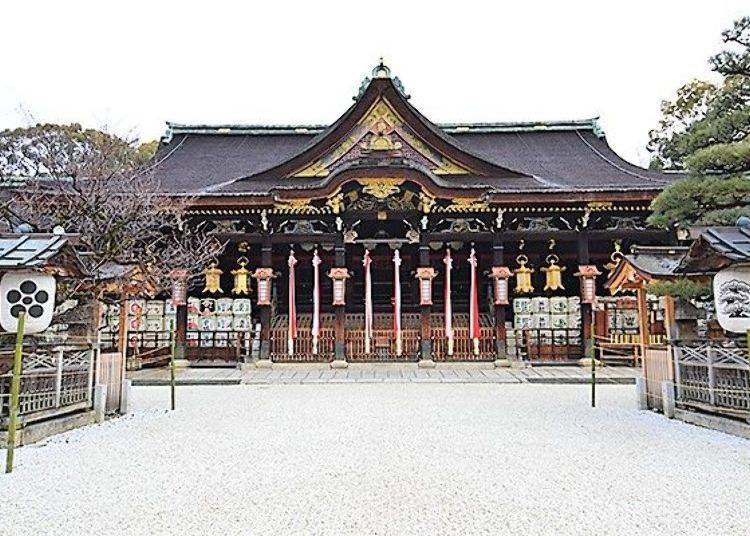 When you pass through Sankomon you come to the main building of Kitano Tenmangu Shrine.

The shrine is designated as a national treasure. It consists of a Honden (main hall), Haiden (a hall for prayer), Ishinoma (stone hall) and Gakunoma (a music room) all linked together in Japan’s oldest example of an architectural style known as yamudzukuri. It is a valuable record of the history of shrine building in Japan. The shrine was built by Toyotomi Hideyori in 1607 on the dying wish of the great samurai general, Toyotomi Hideyoshi. 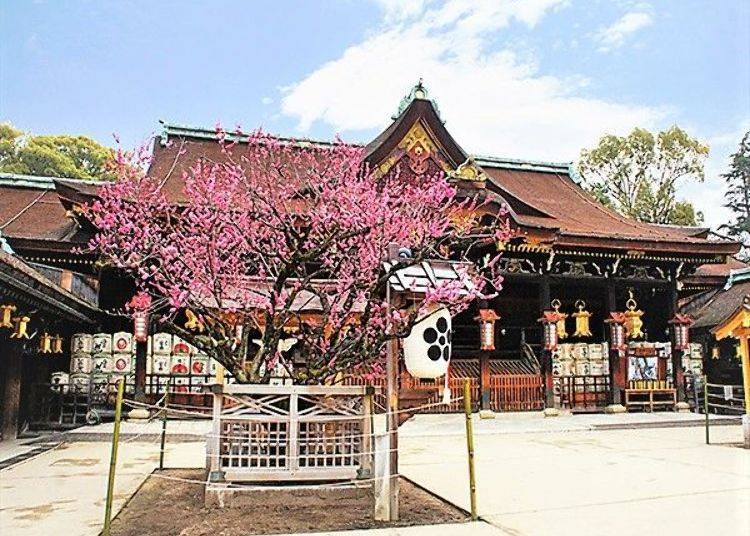 Plum trees grow in front of the Main Hall. There is a plum tree on the left side as you face the Main Hall, while on the right a pine tree is planted. 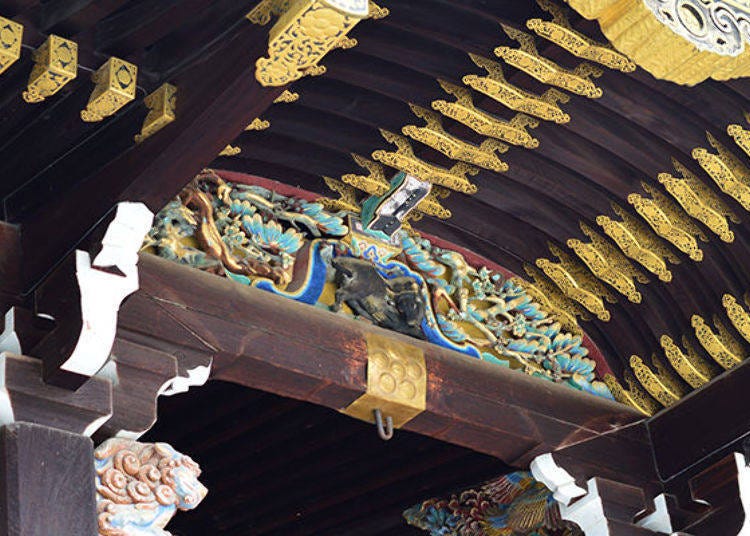 There are many images and statues of Michizane as a cow in the grounds of the shrine. However, they are all in a reclining posture. For some reason, this is the only standing cow in the shrine precinct. This is also counted as one of the Seven Wonders of Kitano Tenmangu Shrine. 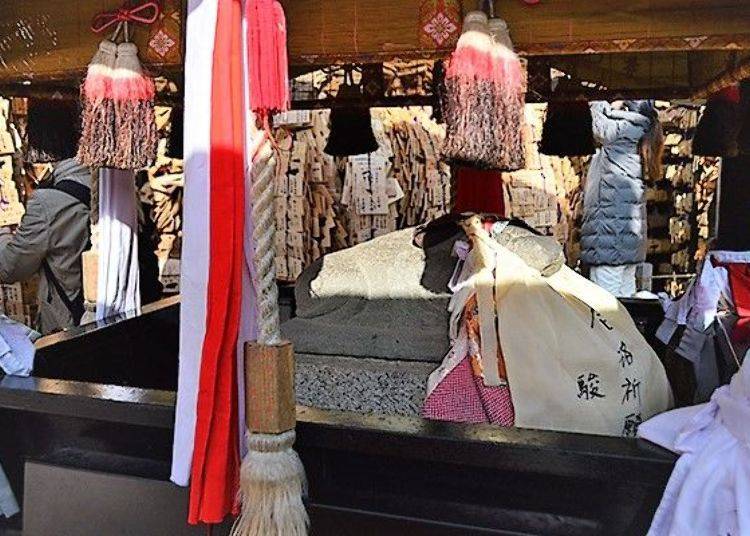 In the northwest corner of the precinct you’ll find Ichi ganjoju no oGyusama (the “Wishing Cow”). Of the many cows at Kitano Tenmangu, it’s said that you can make a wish come true by stroking this cow. There was a whole line of people queuing up to do this when we visited! 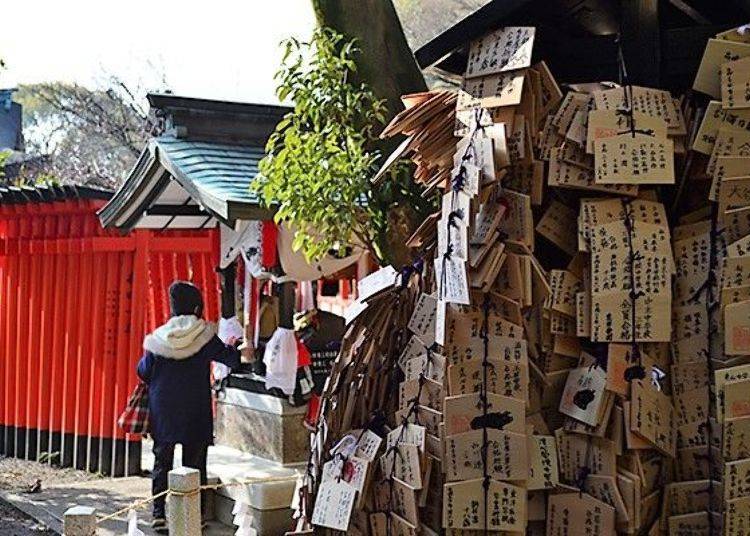 ▲Hundreds of prayers are made to the Wishing Cow 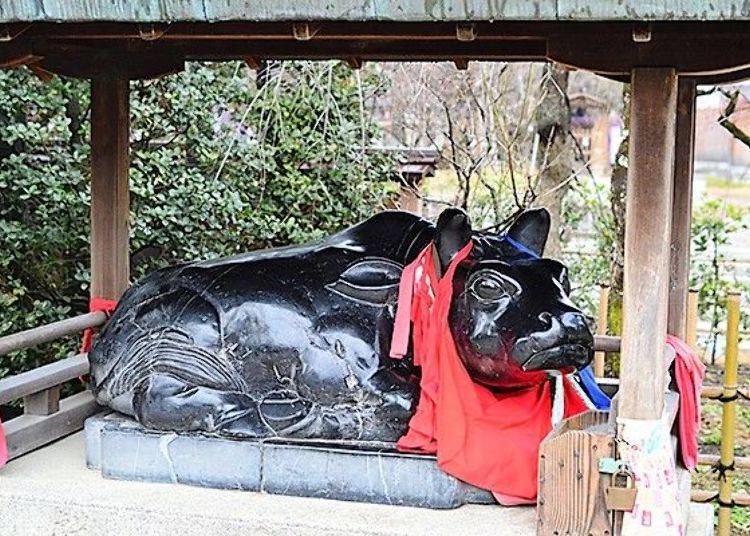 Here is the cow that people stroke. It’s said that stroking its head will make you wiser and more intelligent. So if you’re a student or you’re revising for exams you should give this a try! It’s also said that if you rub an injured body part, then rub the same part on the cow statue, that part of your body will get better.

Once you’ve finished worshipping and praying for academic success in the Main Hall, head to the Plum Garden. 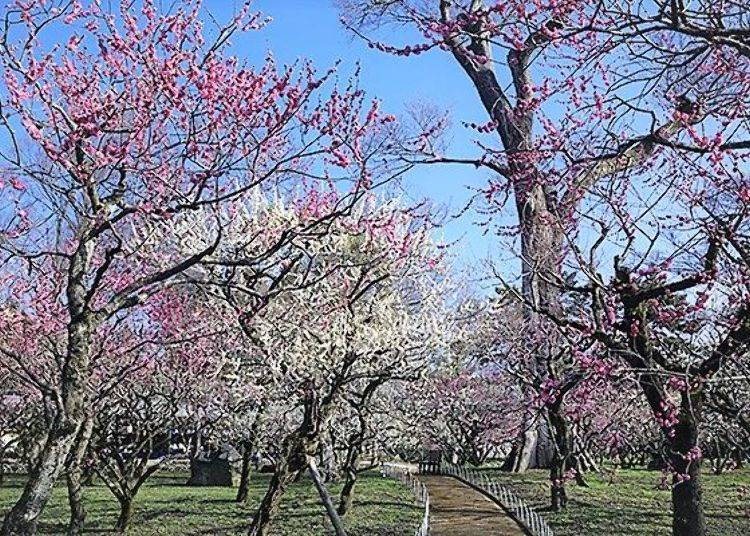 So many different varieties of pink and white plum tree blossoms line the path, stretched out in patterns. The plum trees around the Main Hall are gorgeous, but the trees in the Plum Garden are just magnificent. There is an admission fee for the garden but it really is worth a look, so please do make the effort to visit! 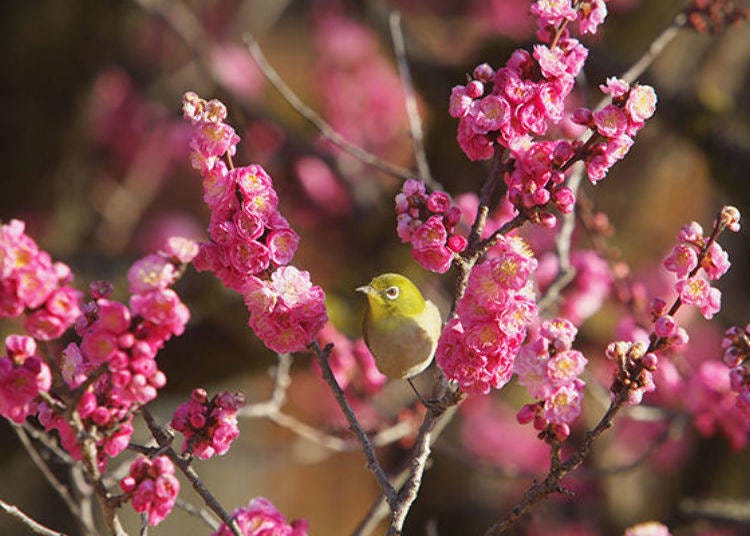 ▲ Colorful plum blossoms. You might even get a glimpse of the classic Japanese motif, “The Bush Warbler in the Plum Tree.” 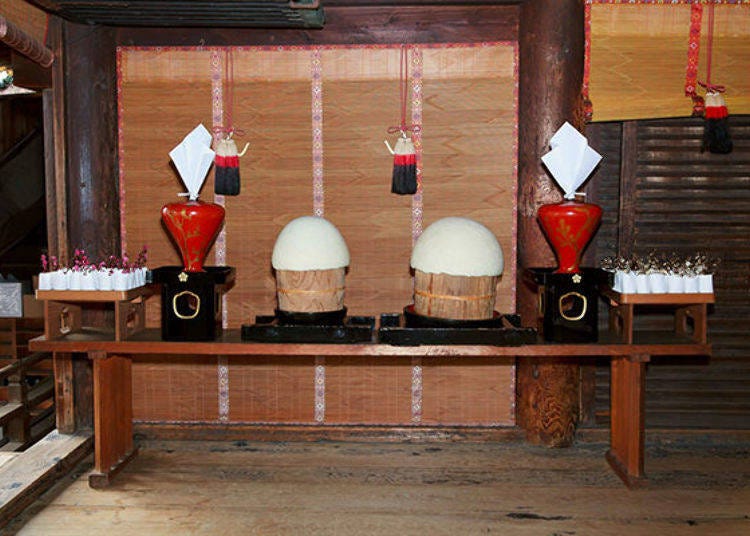 ▲A scene from the Baikasai (Plum Blossom Festival) The Baikasai is held to mark the anniversary of Sugawara no Michizane’s death, and has 900 years of history behind it.

A teahouse serving Japanese tea and cakes is set up for the Baikasai and the Baikasai Nodate Ochanoyu (Plum Blossom Tea Ceremony) is held on February 25. 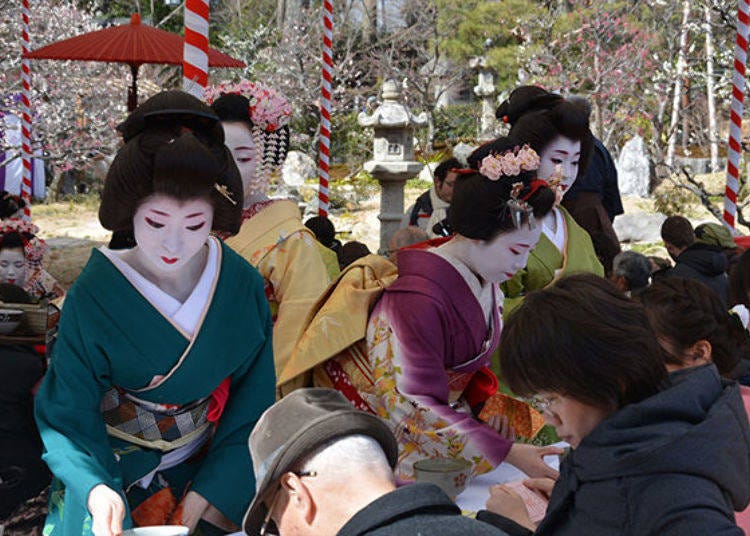 The Plum Blossom Tea Ceremony has its origins in the Kitano Ochanoyu (Grand Kitano Tea Ceremony), the mass tea ceremony held by Toyotomi Hideyoshi at the shrine. It’s an opportunity to drink tea and eat Japanese confectionery in the company of geisha and maiko from the traditional Kamishichiken geisha district. 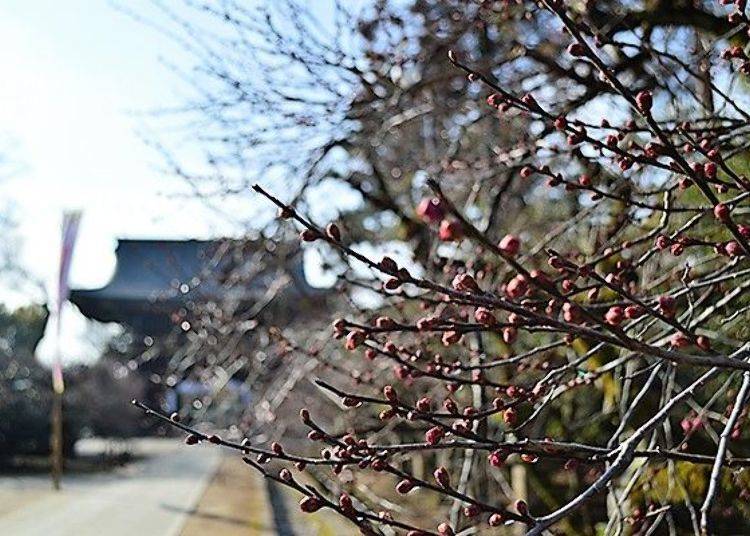 Sounds like fun, don’t you think? We strongly recommend a leisurely stroll in the grounds of the shrine in plum blossom season.

Book an unforgettable experience in Kyoto!

See the morning freshness of Kyoto in an early bird tour
Authentic Tea Ceremony by a master of Urasenke school, Kyoto
Experience Rental Kimono and Yukata in Kyoto
Visit Kyoto's Amazing Zen Gardens in a Private Half Day Tour
*This information is from the time of this article's publication.
*Prices and options mentioned are subject to change.
*Unless stated otherwise, all prices include tax.