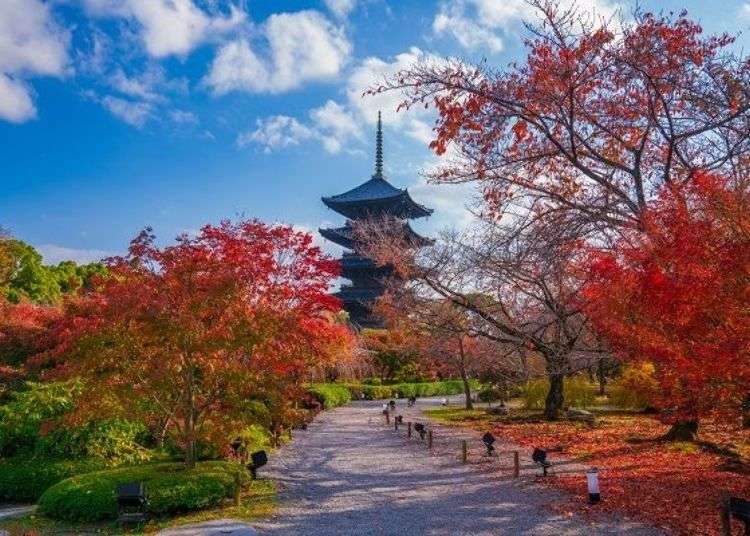 Toji—literally the ‘East Temple’—has a famous five-storied pagoda that’s particularly picturesque in autumn, when surrounded by colored leaves. This is a common image seen in posters and T.V. commercials.

Here, we will explore Toji’s temple grounds, which have been around the Heian period, and cover the special illumination service that occurs in autumn every year. Let’s dive right in! 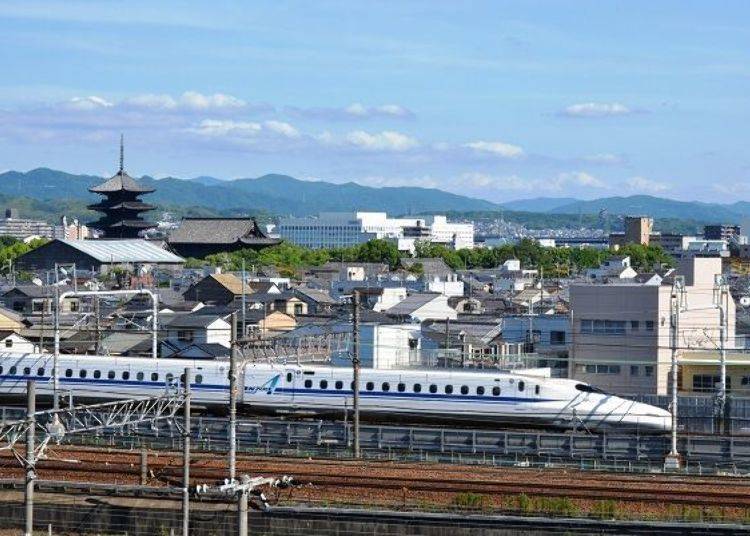 Toji Temple’s five-story pagoda can be seen from the window of the Tokaido Shinkansen, which connects Kyoto Station and Shin-Osaka Station. Both the tower and temple have a large presence in Kyoto, even with all the other temples in the city. Toji, a remnant from the Heian Period, was built some 1,200 years ago; it was registered as a world cultural heritage site in 1994. 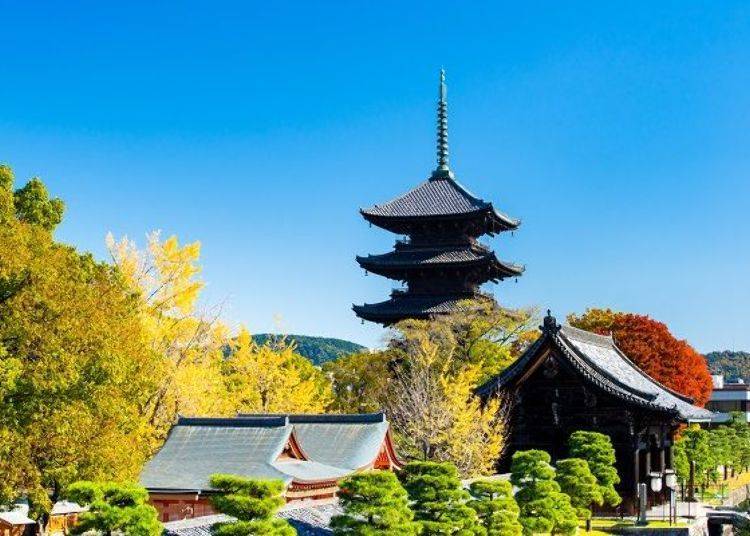 Toji (also known as Kyoogokuji) is the head temple for Toji Shingon sect. It was built two years after the capital was transferred in Enryaku 5 (year 796). The Rajomon gate was constructed to the east to protect the nation through the power of Buddha.

After that, Emperor Saga appointed monk, scholar, and poet Kobo-Daishi Kukai to manage the temple; Kukai then started construction of the Kodo (auditorium) and pagoda. The temple we see today over a millennium later was designed by Kobo-Daishi Kukai. While feeling the grand scale of history and passion, let’s head into the temple grounds. 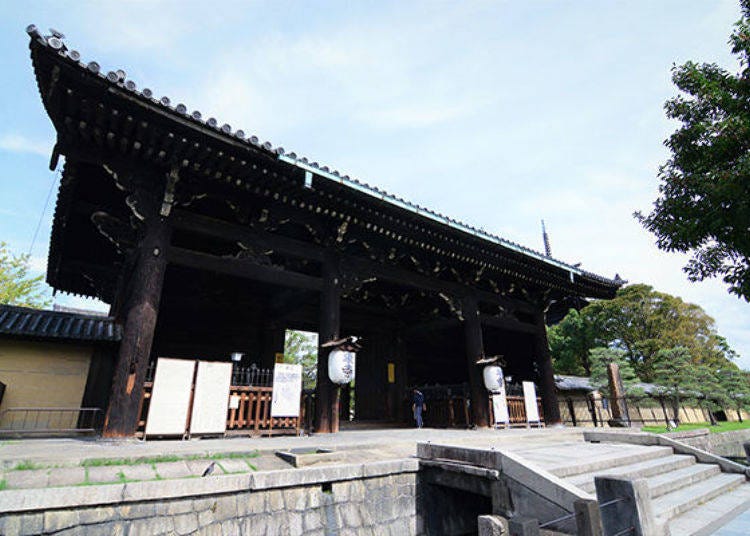 Nandaimon (the ‘big southern gate’), located to the southwest direction from Kyoto Station, is the main entrance to the temple. With the 1,100th anniversary of the capital transfer, in Meiji 29 (1895) it was transferred and reconstructed from Sanjusangendo Temple. It is quite large, with frontage about 18m and with a depth of 10m. Also you can see various architectural styles from the Momoyama period. 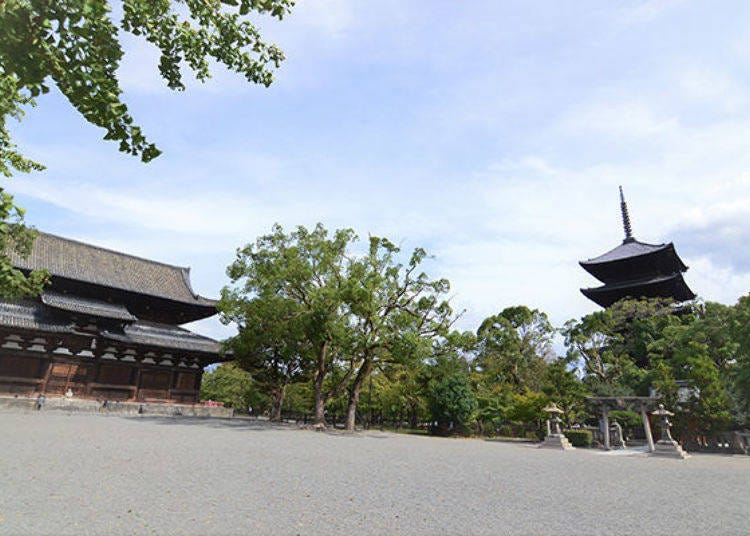 Entering the temple grounds from Nandaimon, Kondo is to the front and the pagoda is to the right. The tower is quite tall and can be seen from a distance. From here walk north so Kondo is to your right and head to the visitor entrance.

This is an open area and free to enter. When we visited there were tourists sightseeing around and locals out for a stroll. 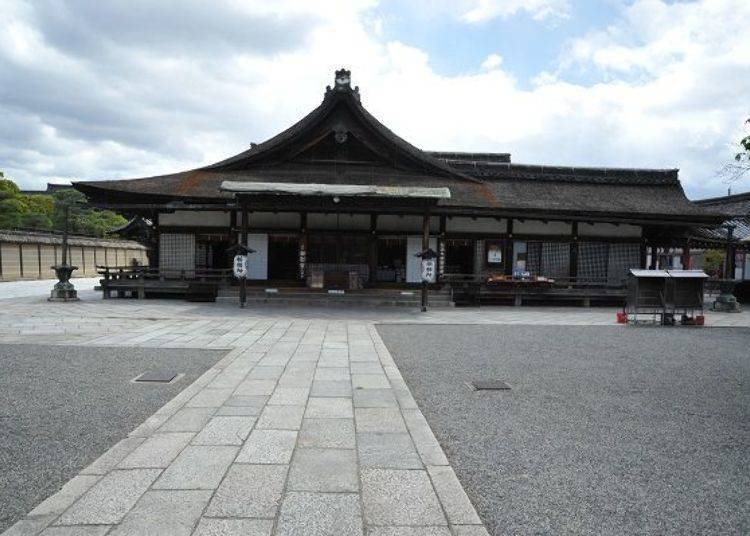 Going north, you will see Miedo in an area surrounded by tile roofed walls. This is where Kobo-Daishi Kukai lived. To this day every morning at 6 they conduct shojinku rituals where they serve tea and food as if he was alive. This area is also open to the public. 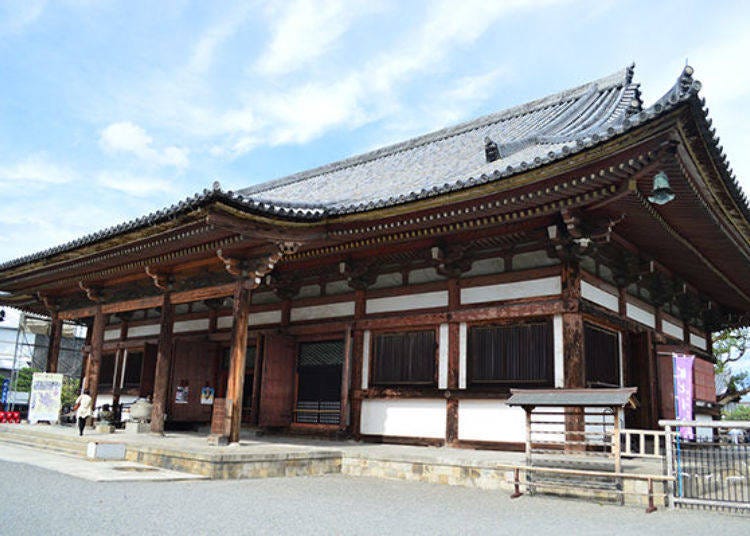 Walking west from Miedo you will come across the Jikido. This is an area where monks would eat and where one would present hand-copied sutras from a pilgrimage, such as the Shikoku 88 temple pilgrimage. This place also holds the Statue of the Eleven-faced Kannon and is also called Kanondo. 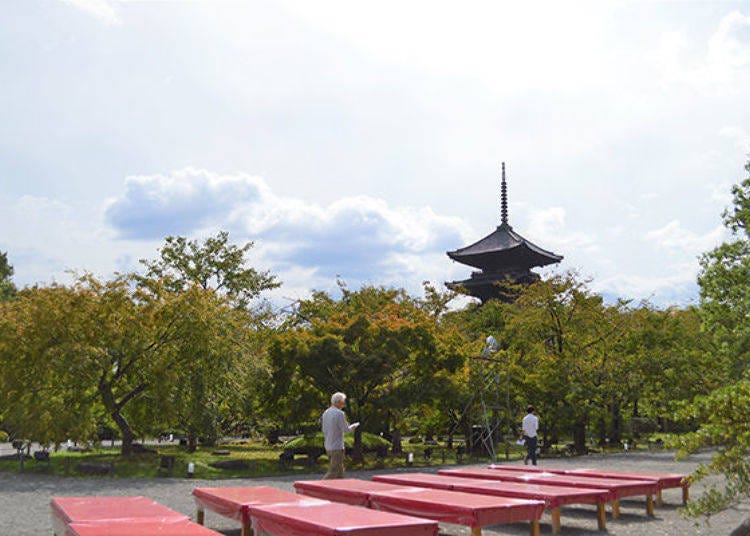 ▲Near the visitor entrance there are gift shops and tea shops

South of the Jikido is the visitors entrance. Here you will pay admission and enter the garden area with Pagoda, Kodo, Hyoutan Ike (Hyoutan Pond) and other locations. 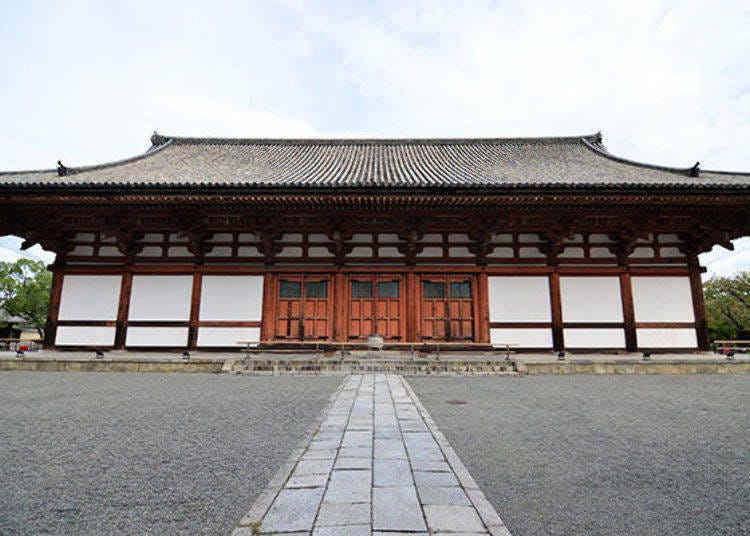 Going through the temple worshiping route first you will see Kodo. It is located in the center of the temple grounds and it is said that Kodo represents the essence of Kobo-Daishi Kukai’s teaching.

In Kodo there is a three-dimensional mandala of Dainichi Nyorai (Vairocana) who is considered to be the center of the universe, surrounded by Gochi Nyorai (Five Tathagatas), Godai Bosatsu (Five Great Bodhisattvas) and Godai Myoo (Five Great Wisdom Kings).
It was established in Jowa 6 (839), however it was lost due to fire in Bunmei 18 (1486), and 5 years later it was rebuilt.

Next we will come across the national treasure Kondo. This is the main hall of Toji and said to be built in Enryaku 15 (796). Like Kodo it was destroyed in Bunmei 18 (1486) and was rebuilt in Keicho 8 (1603). When they rebuilt the temple they used the Momoyama Period construction method, however the bottom roof in the front is one step lowered, which is the Nara Period style of construction. In the hall there is a 2.9m tall statue of Yakunishi Nyorai (Bhaisajyaguru).

You can enter Kodo and Kondo, however taking pictures are not permitted. The interior of the hall with faint sunlight illuminating the various statutes is an unworldly sight. Clear your mind, take in the holy air, face the statues and put your hands together. 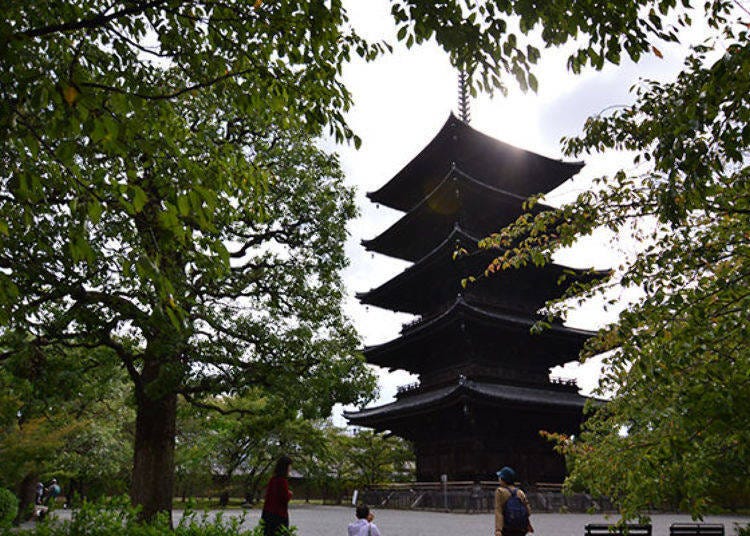 Going past Kondo, you will see the magnificent pagoda between the trees. The pagoda has a height about 55m, equivalent to a 19 story building! It is the tallest wooden building in Japan, and once you get close the presence of the building is overwhelming. 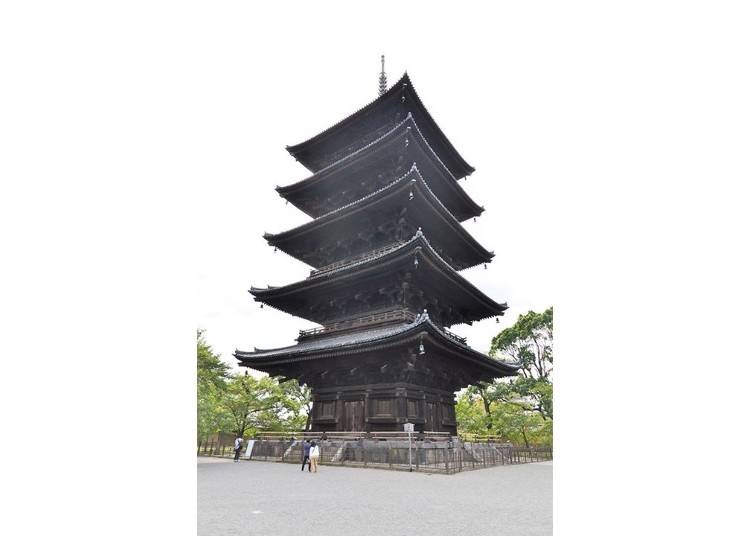 Designated as a national treasure, the five-story pagoda was constructed by Kobo-Daishi Kukai, however it took 50 years to complete. The original structure had been destroyed by fire that was started by lightning and other incidents; the current tower is the 5th generation. The last reconstructions was conducted by the Edo Bakufu third shogun Tokugawa Iemitsu, it is said it has been constructed in the same location, site and image.

The tower has a strong presence in this day and age, however it must have been something extraordinary for people back in the Heian Period. 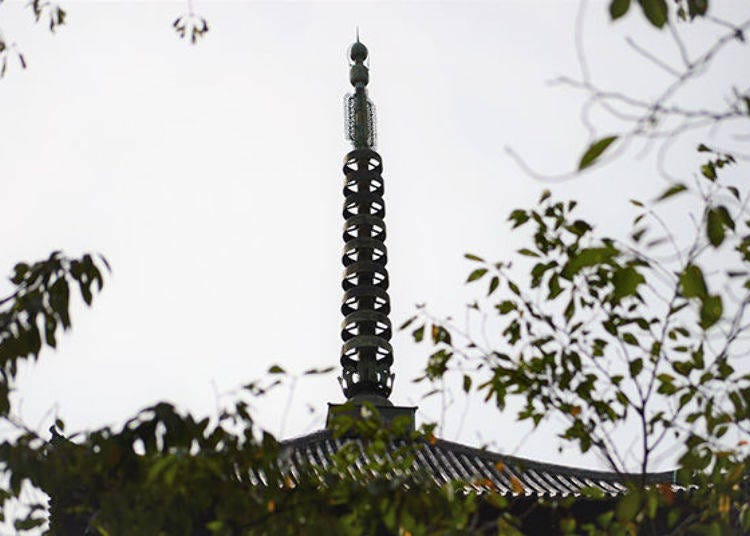 The five-story pagoda originated from the stupa, a building to place the remains of Buddha. The sorin (vertical shaft) on the roof is expressing the umbrella that is layered on top of the stupa. Inside the tower is a brilliantly colored esoteric space with the sarira (remains of Buddha) that Kobo-Daishi Kukai brought back and the center pillar has a statue of Dainichi Nyorai surrounded by other statutes of Nyorai and Bosatsu.

Normally the interior is closed to the public, but during the spring and autumn there are special viewings, which will be a great time to visit. 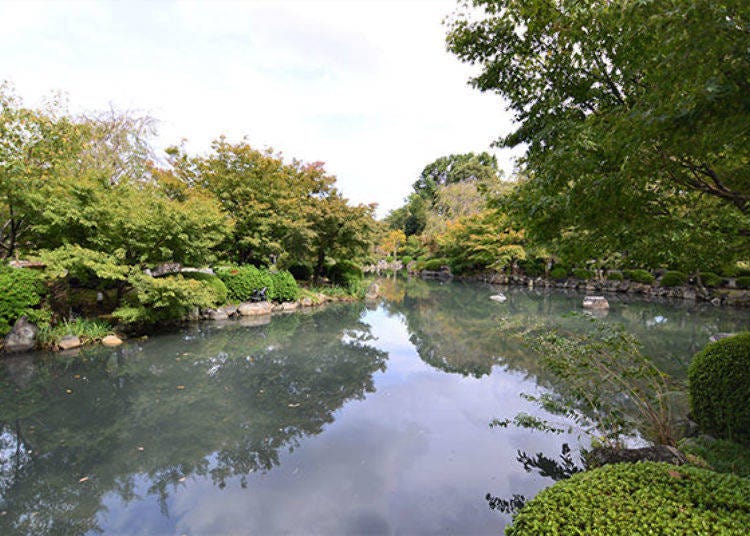 On the temple grounds a beautiful garden surrounds Kondo, Kodo and the pagoda. Around Hyoutan Pond various plants grow throughout the season for enjoyment, such as plum, cherry and Japanese wisteria during spring, crepe-myrtle during the summer, and maple and ginko during the autumn. 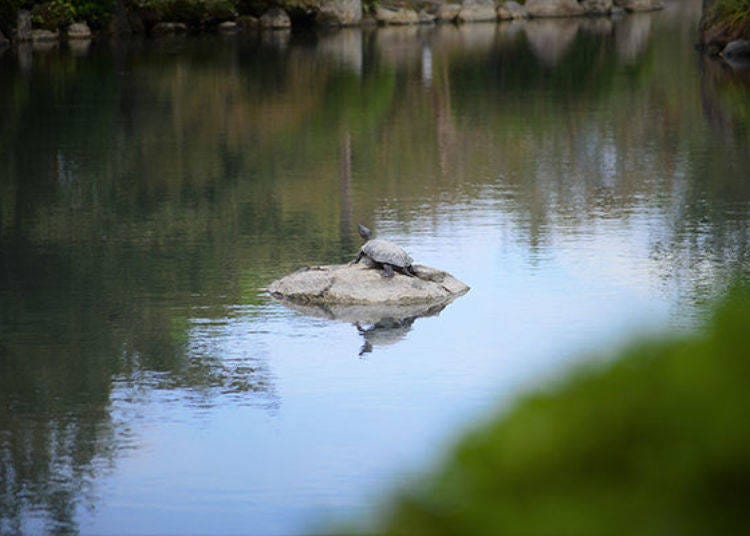 ▲A turtle sunbathing in the pond and beautiful koi swimming 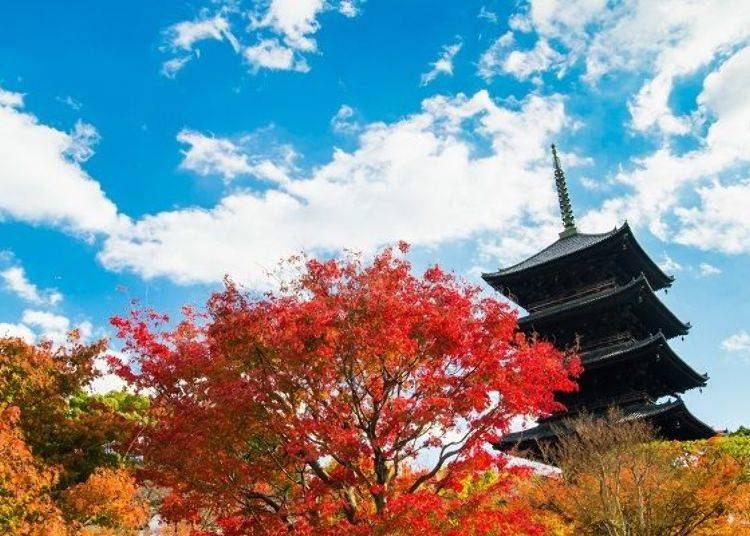 In autumn the 250 maples in the garden start to color. The best time to see the legendary fall foliage here is mid-November to early December. The contrast of the pagoda under the blue sky with colorful leaves is a sight that truly represents Kyoto. 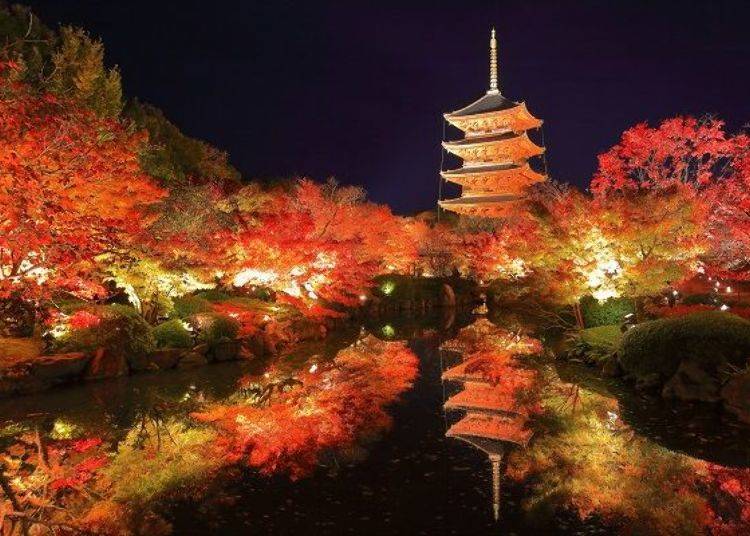 From late October to early December they illuminate the area. The reflection of the tower and colored leaves on the pond is spellbinding. This is a sight that you simply must see when you visit Kyoto. 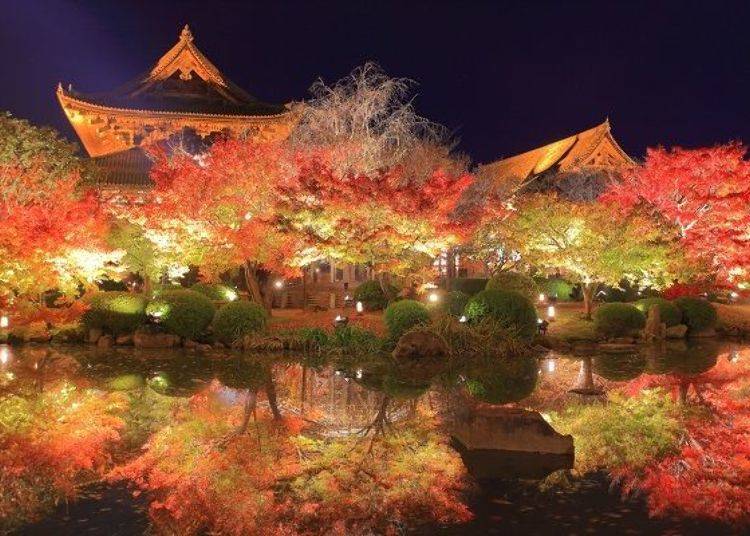 ▲Beautiful view of Kondo and Kodo

Enjoy your peaceful time at Toji, a temple constructed by Kobo-Daishi Kukai with a passion that can be felt today.