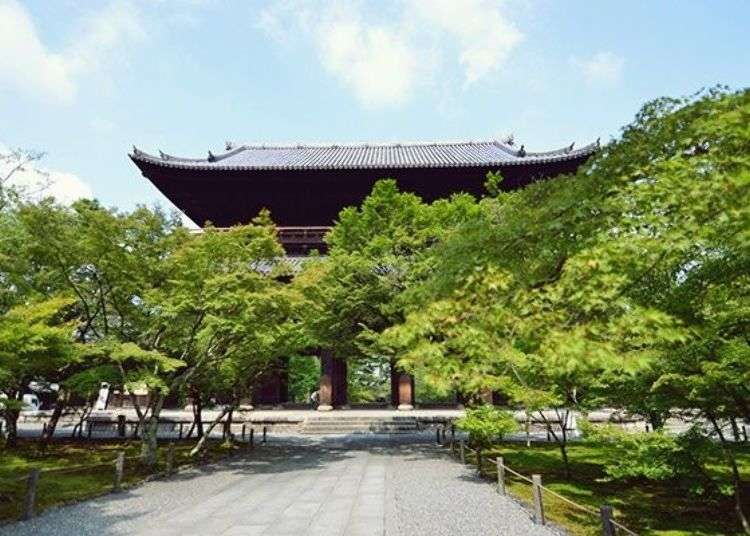 Nanzenji Temple Guide: Visual Walk Through One of Japan's Most Incredible Temples

Kyoto's Nanzenji Temple is extraordinarily beautiful in every season, and it seems a postcard-perfect photo awaits at every turn.

There are many beautiful spots in Nanzenji Temple for snapping photos, such as the Sanmon mentioned in the Kabuki play of the same name, the brick aqueduct, and the garden representing a Zen interpretation of the world. Here we'll take you around the grounds of Kyoto's celebrate temple and share some of the best areas for photos.

Nanzenji Temple, located in Kyoto Rakuto, is the main temple of the Rinzai Sect of Zen. It is proudly one of the most famous temples in Kyoto. It was founded about 710 years ago in 1291. Built in 1264 as a retirement villa for Emperor Kameyama, when he converted to Zen and it then became a Zen temple and he took for himself the title of Great Priest. 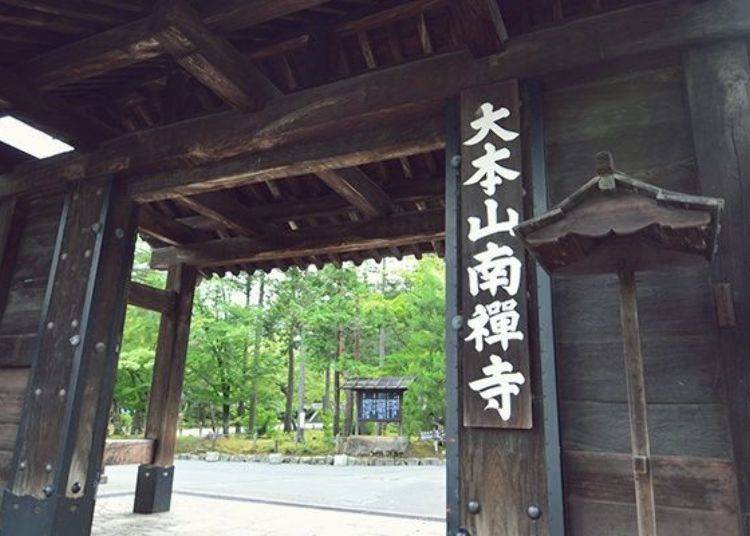 During the Muromachi Period its status was raised to Gosanshijo, which means a status higher than that of Gosan.

Gosan, literally “five mountains”, represented the five major Zen temples in Kyoto. Accordingly, the status of Nanzenji Temple was placed above them. The temple has been destroyed by fire three times, the first occurring during the Muromachi Period. The present structure was built during the first part of the Edo Period. 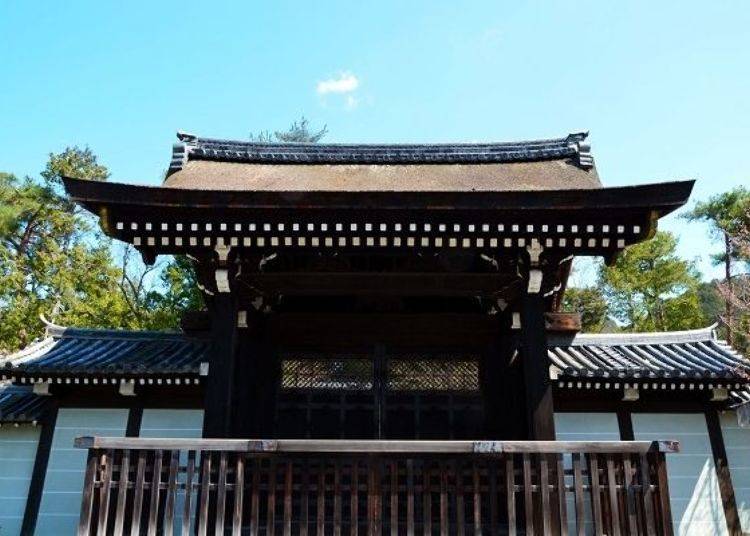 Stroll the grounds of Nanzenji, one of Kyoto's most famous temples 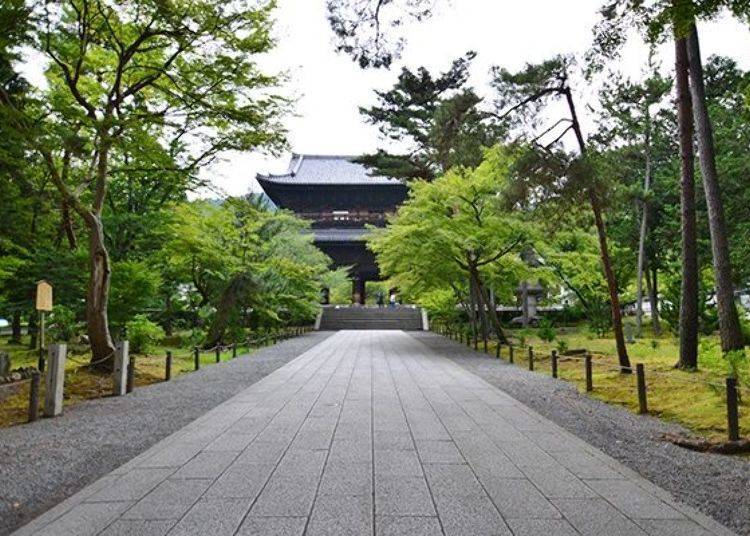 Now let’s take a look inside the temple grounds. After entering through the middle gate proceed to the left. With the Chokushimon to your back, you will see the Sanmon ahead of you 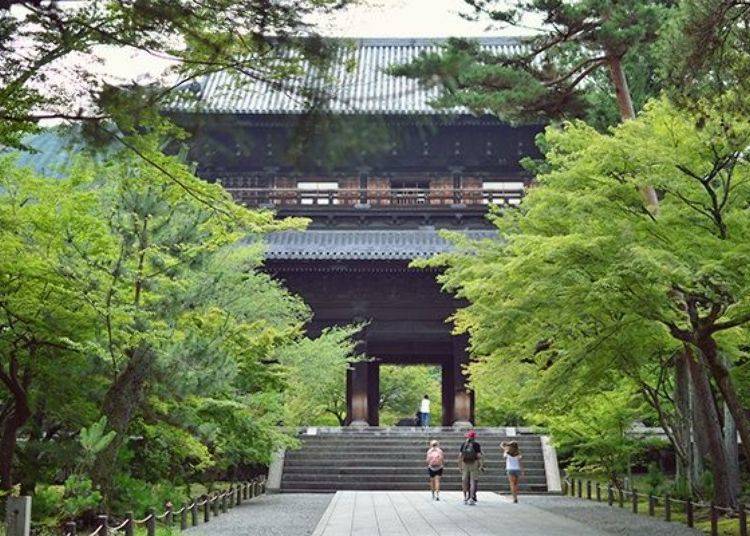 ▲ Its immense size becomes more apparent the closer you get to it. You can get an idea of that by how small the visitors approaching it appear. 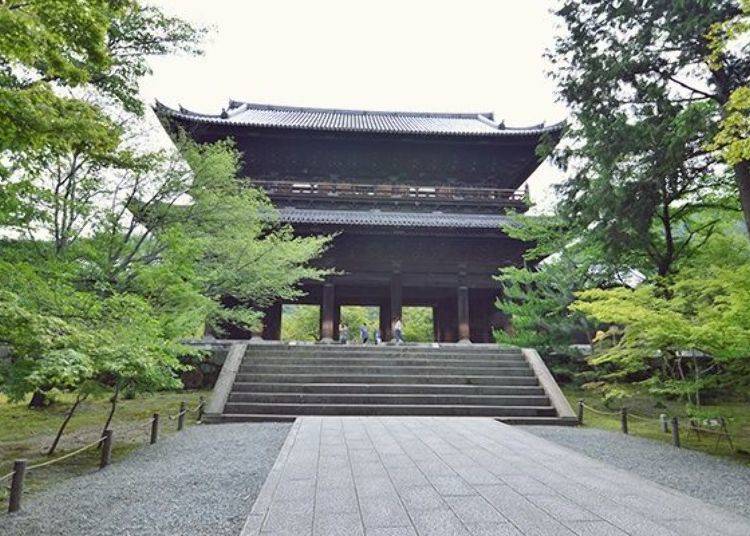 This is a good place to take a photo at Nanzenji Temple. The Sanmon is also called the Tenkaryumon and is one of the three largest temple gates in Japan. It was built and donated in 1628 by Todo Takatora as a memorial to the military commanders and soldiers who fought in the 1615 summer campaign of the siege of Osaka. 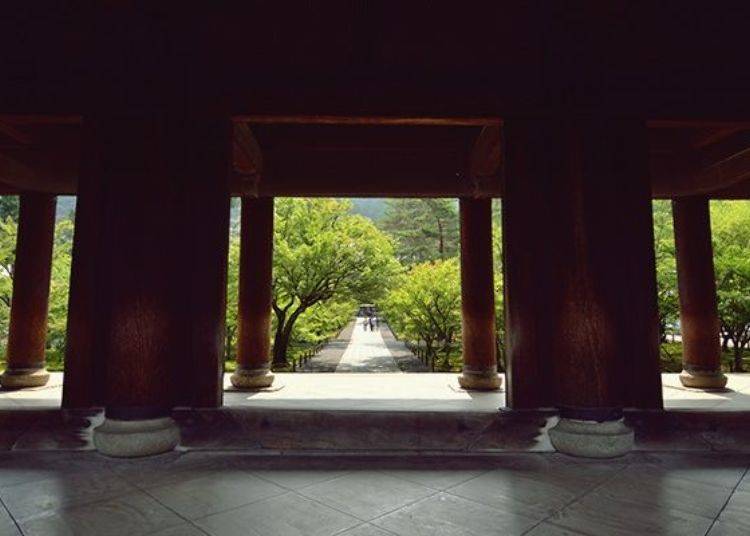 This is the view looking towards the Hatto [sermon hall] through the large columns of the Sanmon. The beautiful view beyond framed by the shaded gate is like a large painting making this an absolute-must photo spot at Nanzenji Temple. The view varies from season to season with cherry blossoms in the spring and autumn leaves resplendent in the fall. 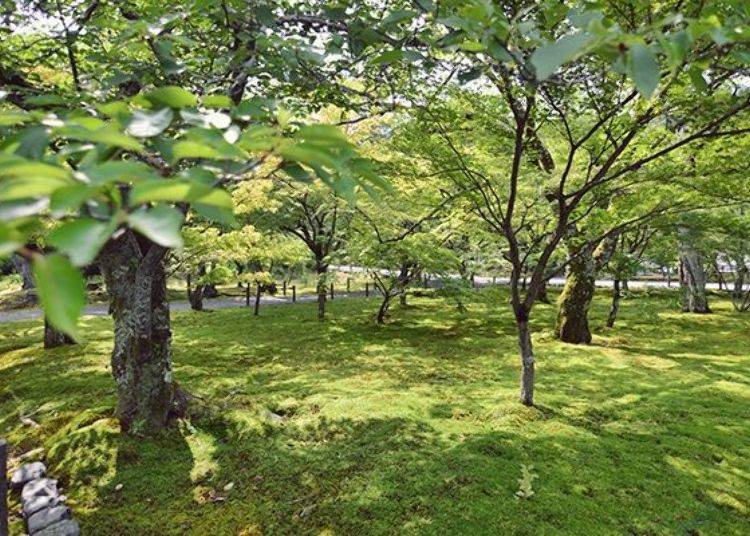 ▲ A spectacular moss garden near Sanmon 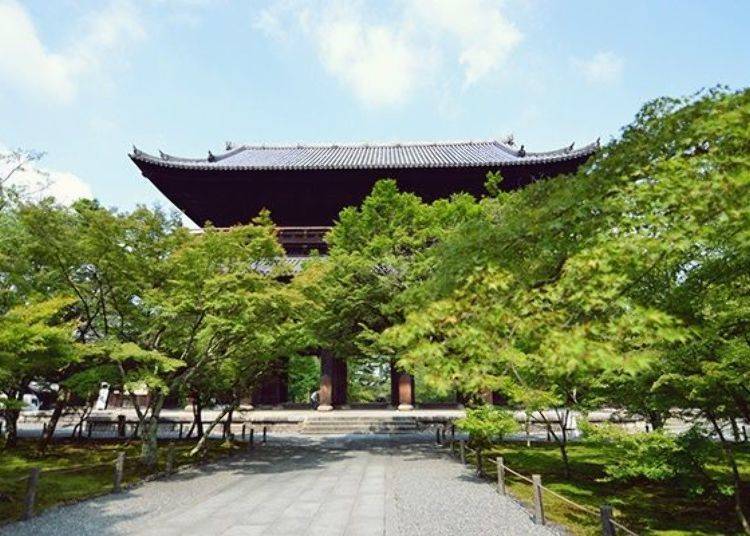 Looking back at Sanmon with Hatto to your back; its stately form rising above the verdant trees. Now let’s go up inside the Sanmon! 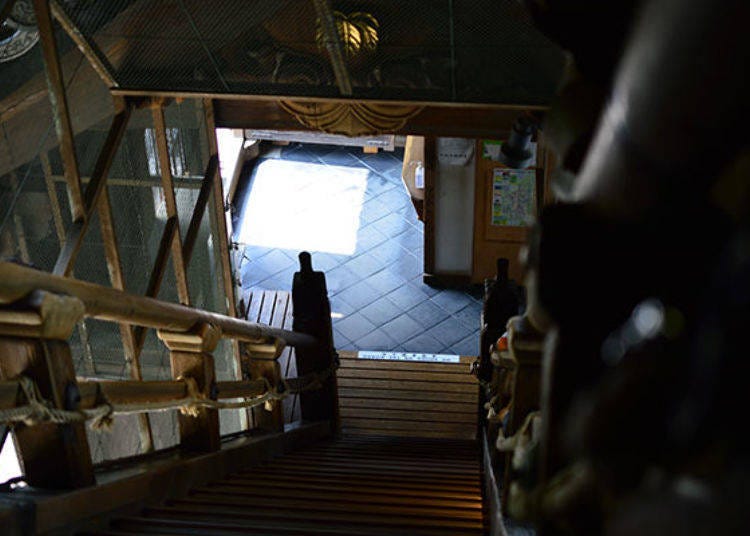 “It’s the view, the view” - 22 meters high! The view of Kyoto from the massive Sanmon 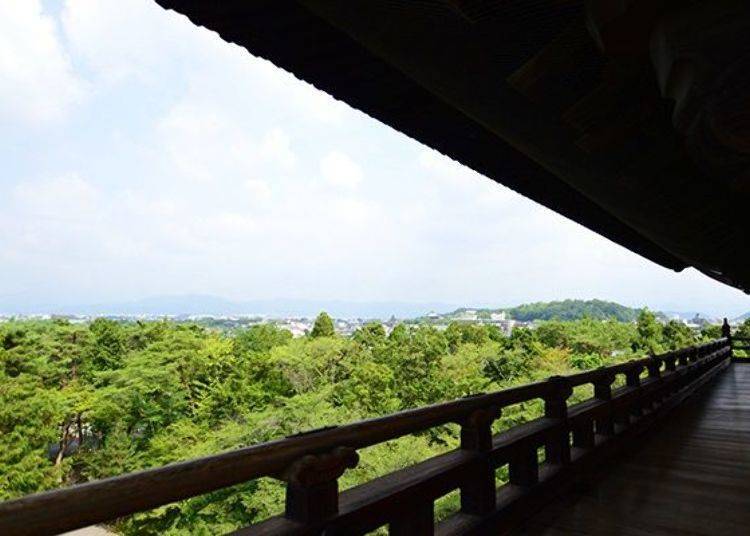 The scene unfolds before your eyes once you reach the top of the steep stairs. There is an exhilarating sense of freedom! The streets of Kyoto lie beyond the trees of the Nanzenji Temple grounds.

In the Kabuki play Sanmon Gosan no Kiri, Ishikawa Goemon utters the memorable lines, “It’s the view, the view” when looking out at the scenery from the top of the Sanmon. You can take some magnificent photos from the center of the Sanmon as well as from the corners of the balcony, too. 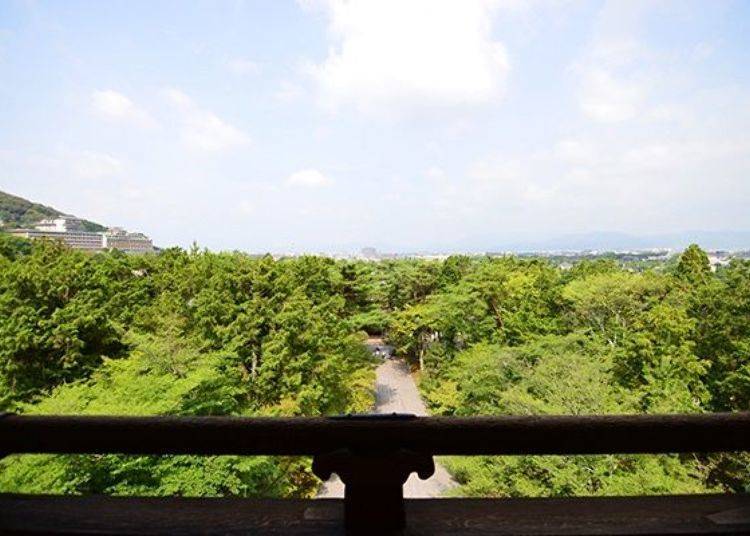 The ceiling, pillars, and beams of the gate tower are painted in scenes of celestial beings and phoenixes in the style of the Kano School, but unfortunately you are not allowed to photograph them. Certainly, though, you will be left with a lasting impression of them. 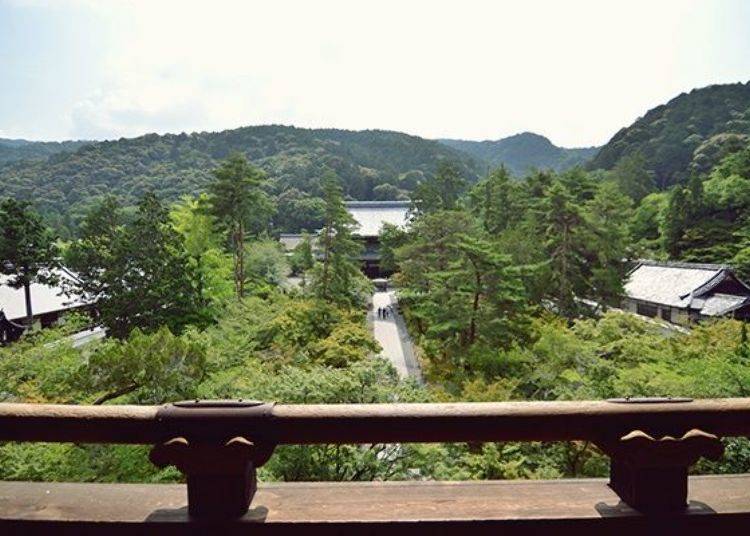 ▲The view looking towards Hatto. The hills in the left of the photo are where the famous ceremonial bonfires of Gozan are lit in the form of Japanese characters. 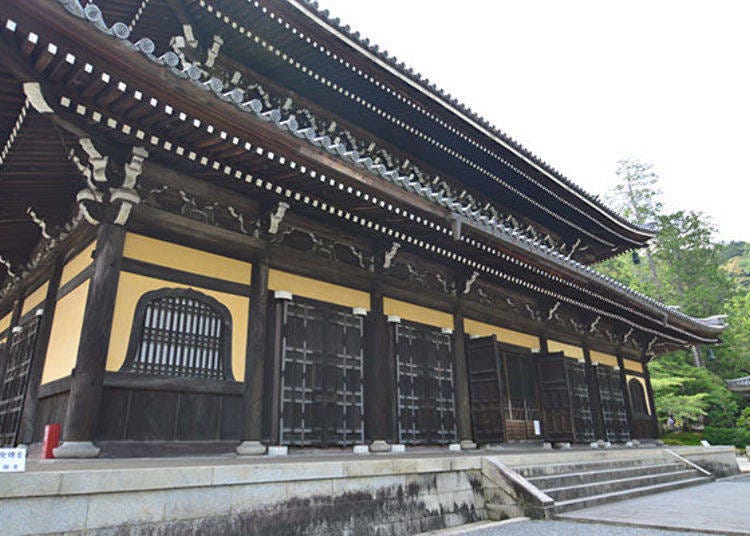 The Hatto is the central structure of the Nanzenji Temple complex and is where formal events and official Buddhist ceremonies are held. The original structure was destroyed by fire and the current building was rebuilt in 1909.

In Hatto, the three statues of the Gautama Buddha, Manjusri Bodhisattva, and Samantabhadra Bodhisattva are enshrined, and on the ceiling there is a painting of a dragon by the artist Imao Keinen who was active during the Meiji and Taisho eras. 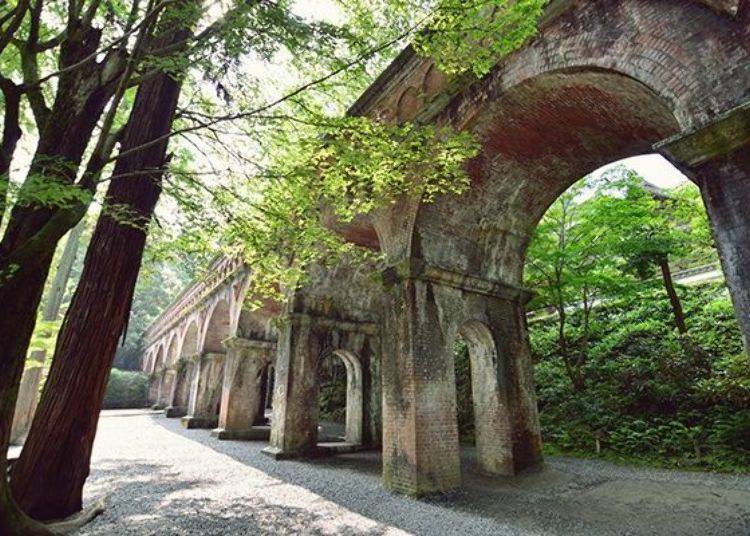 On the south side of Hatto as you go towards Nanzenin you will see a structure made of bricks. This is the Suirokaku Aqueduct, a location used in many TV programs and movies. It was constructed in 1890 in order to bring water from Lake Biwa to Kyoto. 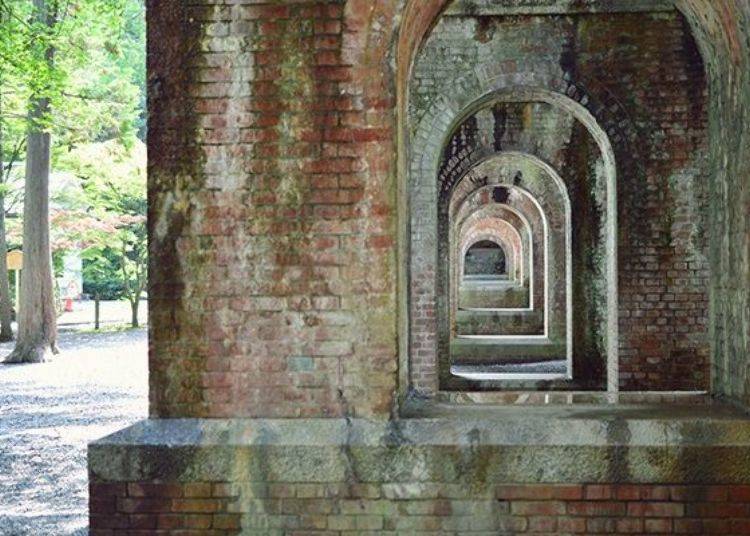 ▲ A photograph taken from this angle looking between the support columns rather resembles an image created by mirrors facing each other.

The arched supports produce this view. The old brick construction has a lovely retro feel. This large, Western structure sitting amidst these old, famous temples seems incongruous, but it nevertheless is very popular with tourists from overseas and young people who find it an interesting spot for taking pictures. 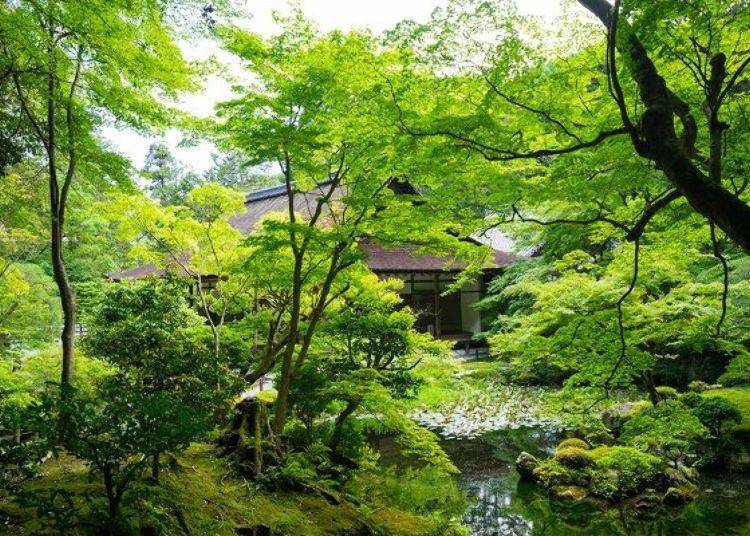 Turning away from the Suirokaku Aqueduct and going up the stairs you will come to the Nanzenin that is famous for its garden that features a path around a pond. This is where the palace that was donated by Emperor Kameyama when he became a high priest once stood and is also the place where Nanzenji got its start.

The garden is a vestige from that time and is typical of the ponds with paths around them that were popular at the end of the Kamakura Period; enveloped in lush vegetation, a subtle and profound atmosphere is produced. It is said that High Priest Kameyama created the garden himself and today is considered one of the three most scenic historical gardens in Kyoto. 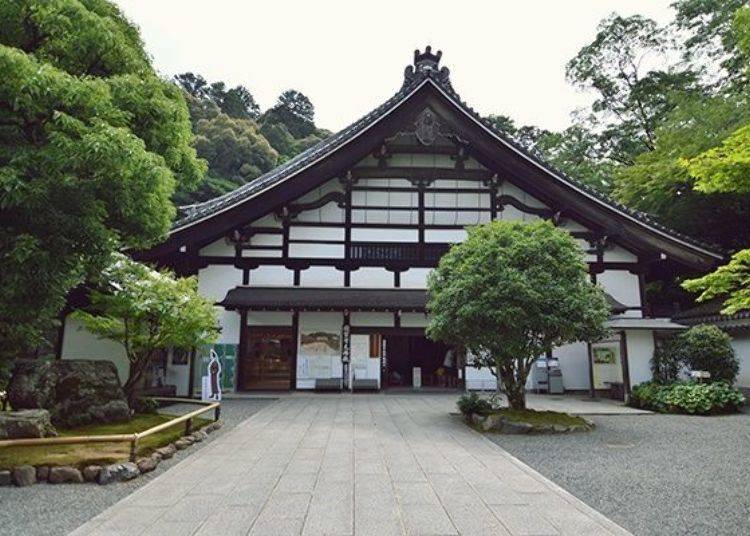 The Hojo Garden, designated a national treasure, is the last place we will introduce.

Hojo is another word meaning Main Hall of a temple and corresponds to Kondo and Hondo which are normally used and also have that meaning. The buildings of the Kyoto Imperial Palace were relocated and rebuilt in 1611. After paying an admission fee (500 yen for adults, 400 yen for high school students, 300 yen for elementary and junior high school students) you can enter after removing your shoes. 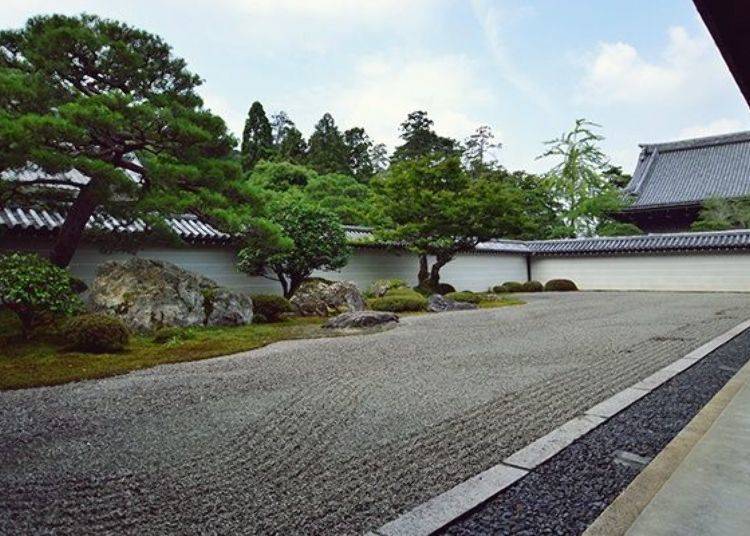 As you walk through the dim corridors, the Hojo Garden, a dry landscape garden typical of the early Edo period, comes into view. It is said to be the work of the gardener Kobori Enshu and is called the Toranoko Watashi no Niwa [Garden of Tiger Cubs Crossing] symbolizing a tiger taking its cubs across a river. 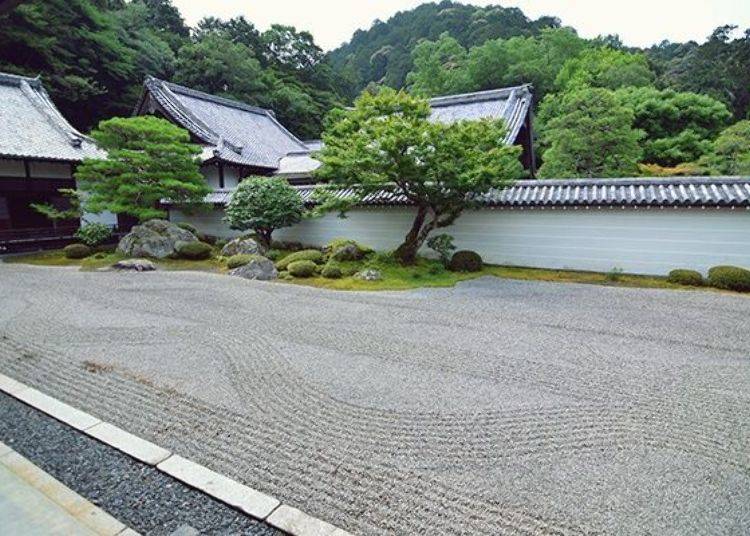 The light-colored gravel represents the river, the large rock the mother tiger, and the smaller rocks the tiger cubs. If you point the camera from the diagonal side of the rock, you will be able to take stunning pictures including a view of Dainichisan in the background. 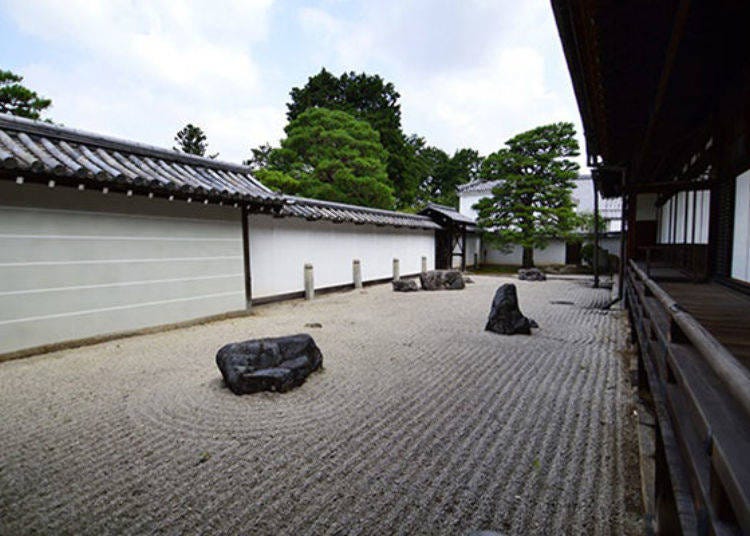 This is the Small Hojo Garden also known as Nyoshintei. The stones in this dry landscape garden are arranged in the shape of the letter kokoro [heart, mind] to convey a sense of calm, enlightenment. Walking around inside the Hojo Gardens you can view either of the gardens. I felt strangely at peace just looking at the gardens in this Head Temple of Zen. 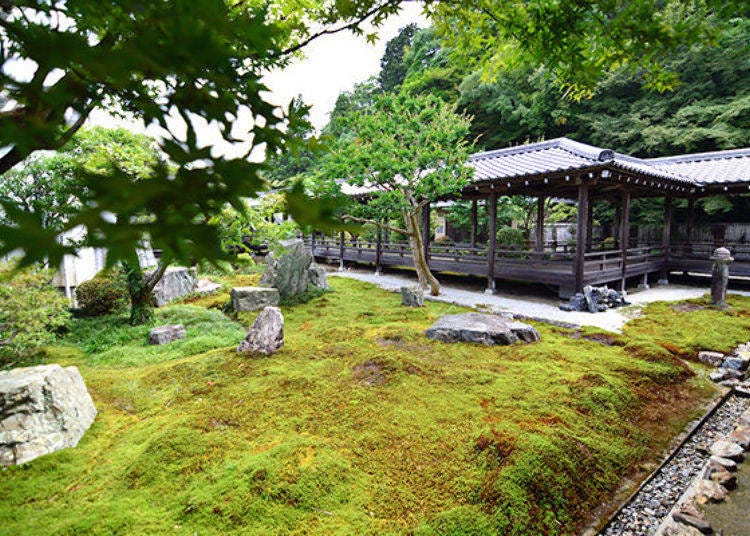 ▲ Following the course you can also see the Rokudo Garden, which represents the six worlds of heaven, human realm, Asura realm, purgatory of animal passion, purgatory of hunger, and hell.

Nanzenji Temple has many photogenic spots such as the dynamic views from the Sanmon, the unusual view through the arches of the old aqueduct, and the peaceful Zen gardens. This is a temple we highly recommend for those wishing to take spectacular photographs.