HOME 5 Unique Japanese Foods that are a Big Hit with Foreigners! 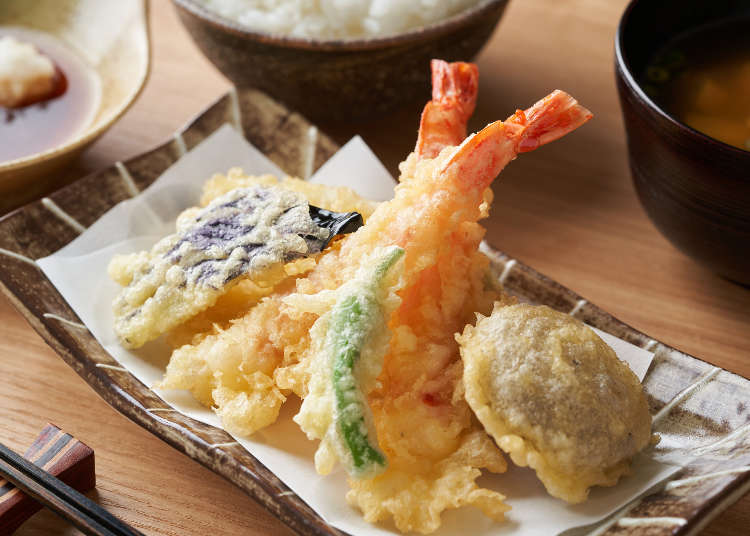 5 Unique Japanese Foods that are a Big Hit with Foreigners!

Japanese delicacies approved by the world. Overseas development of Japanese food such as sushi and sukiyaki is actively conducted, and now there are specialty shops overseas. The cooking method that uses seasonal ingredients and makes the most of the delicate craftsmanship and attractiveness of the ingredients, is a symbol of Cool Japan’s culture. Also washoku (Japanese food) being selected for the Intangible Cultural Heritage by UNESCO in 2015 is probably fresh to memory for many people.

However replicating Japanese flavor overseas is not an easy task. Like the California Roll, a sushi loved in the U.S., it has incorporated local food culture and has been dynamically rearranged.

We conducted a survey with foreigners living in Japan currently to find “What food was beyond expectations that you ate in Japan.” Let’s find out what aspect of the food captivated them.

What Have I Been Eating All This Time!? Amazing Japanese Food 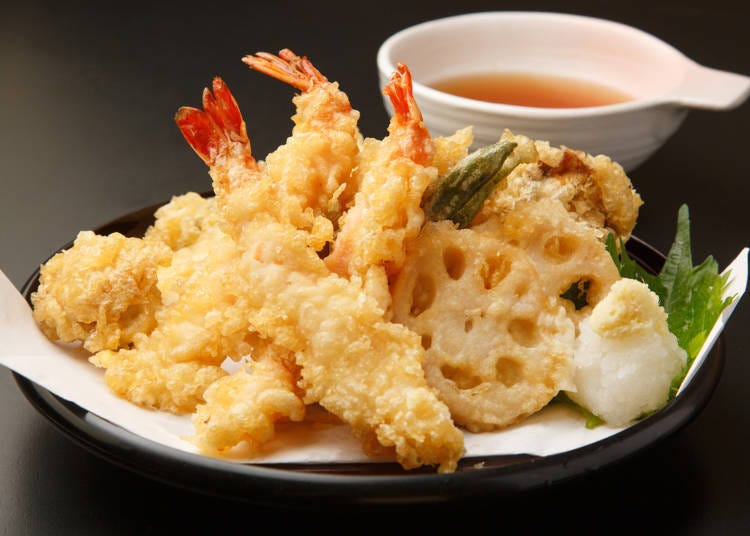 Tempura is usually a seafood or vegetable that has been battered and deep fried.

“A gourmet I met in Japan said that he will take me to his favorite restaurants in Japan and took me to a famous tempura restaurant. The moment I took a bite, I was amazed by how delicious it was. What really surprised me was the texture. The tempura I had in America had a thick exterior and was like a fritter, but the one I had here the exterior was nice and crisp. I enjoyed the vegetables, especially the eggplant and squash tempura. Eating tempura with tentsuyu (tempura dipping sauce) and grated daikon radish felt really Japanese and the colorful dishes was beautiful.” (America/20’s/Male)

The tempura that the American man ate in his home country didn’t taste so good. However his impression towards tempura changed after eating at a famous restaurant in Japan. He told us that it wasn’t just the taste, but the way the tempura looked and the method of eating it was part of the charm.

As a Japanese person most fried food overseas seems dynamic and tasteless. The way Japanese chefs select their ingredients and put a thin exterior to create a crispy exterior requires a delicate technique. It’s understandable that this was ranked in first place as a food that symbolizes Japanese food culture. 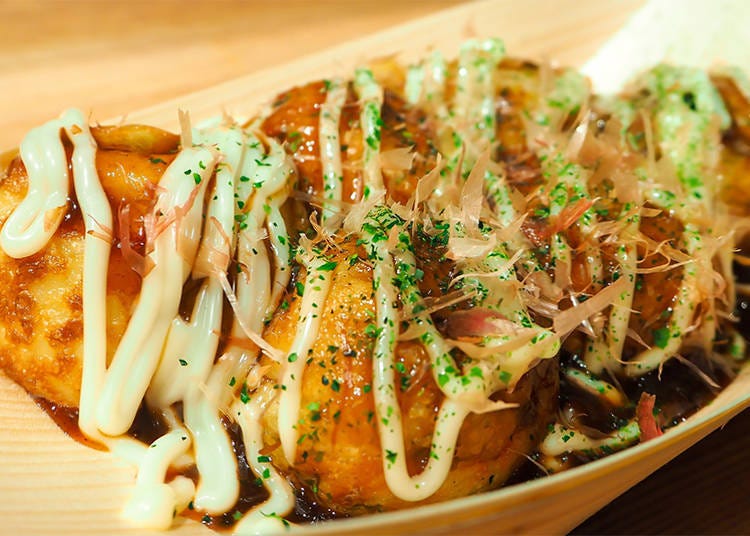 Takoyaki is a ball shaped snack made from flour based batter and filled with diced octopus and other ingredients.

“Japanese takoyaki is really delicious! There are shops in Taiwan that cook and look like the Japanese style, but it is nothing compared to the takoyaki in Japan. The takoyaki itself is flavored well, the exterior is nice and crispy and the inside is gooey. The combination of sauce and mayonnaise is also wonderful. For me takoyaki is the best food in Japan and also the hottest food in (lol).” (Taiwan/20’s/Female)

Konamon (flour based food) such as okonomiyaki, negiyaki, and imagawayaki are loved in Japan, but one of the most popular dishes of all is the takoyaki that originated from Osaka. The takoyaki that the Taiwanese lady had was from the famous chain store ‘Gindaco.’

It seems as though she was charmed by the Japanese takoyaki with the crispy exterior and gooey inside texture, flavored perfectly, compared to the fully cooked takoyaki she had in Taiwan. Not only do we have the Gindaco style crispy & gooey type takoyaki, but there are shops that have fried fluffy & gooey type too. 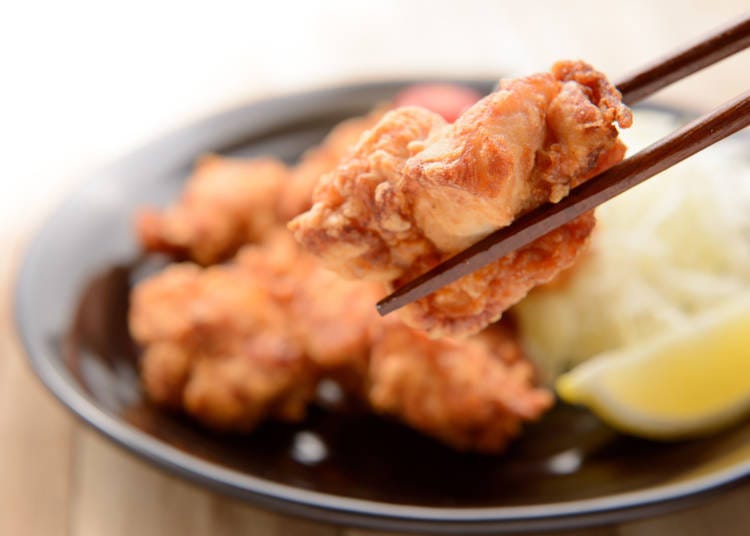 “When I ate karaage for the first time in Japan, I was shocked that it was so delicious! In England I eat fish and chips frequently and used to fried food, but most of the time it’s too greasy and heavy. However Japanese karaage has a crispy exterior and not too greasy and the meat is plump. It feels healthy and I can keep eating them! It’s good as is, but I like to add a little mayonnaise. When eating karaage with rice and miso soup, I think I can understand how Japanese people feel. Karaage is Japanese soul food right?” (England/20’s/Female)

Karaage is the most familiar fried food for Japanese people, and also popular overseas. It looks simple, but many people become hooked to its taste. Probably the seasoning of shoyu soy sauce and garlic must feel “foreign” to the tongues of foreigners. 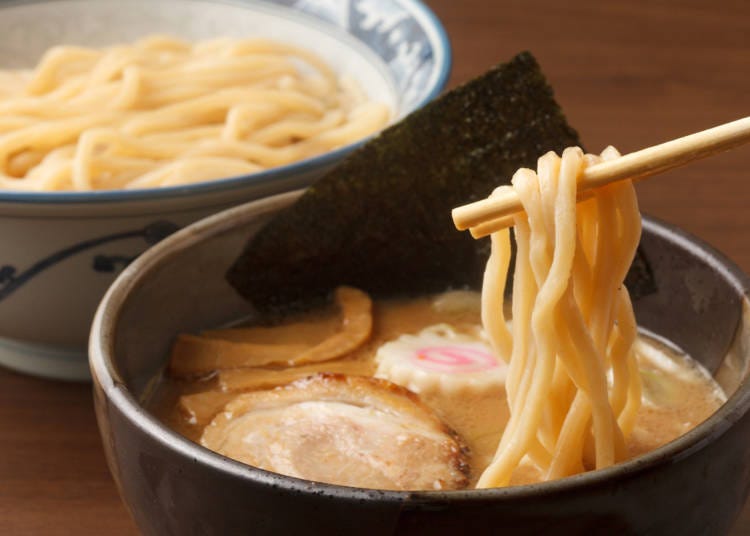 Tsukemen is a Japanese ramen dish where the noodles are dipped separate bowl with soup in it.

“Japanese tsukemen is very popular in Korea and it was a dish I had to try when I came to Japan. The noodles in tsukemen are delicious in Japan! They are thick and chewy, and I love the texture, it is uniquely different from ramen, udon and pasta. My friend that came to Japan with me from Korea loves the tsukemen noodles so much that they won’t dip the noodles in the soup, but eat the noodles and soup separately (lol).” (Korea/30’s/Female)

Tsukemen has become popular and is listed in many Japanese guide books that introduce tourist locations and food. The Korean lady said that she enjoyed the noodles. Unlike ramen the noodles aren’t in the soup, so you can enjoy the flavor of the noodles directly.

In Japan they have unique service to provide extra hospitality such as ordering noodles as atsumori (warm noodles) so the soup doesn’t get cold, or add soup to the tsukejiru (dipping sauce).

Also many restaurants offer large portions for free, which is very welcoming for foreign guests who want larger portions. Also eating the soup and noodles separately is quite unique... I think I have to give it a try. 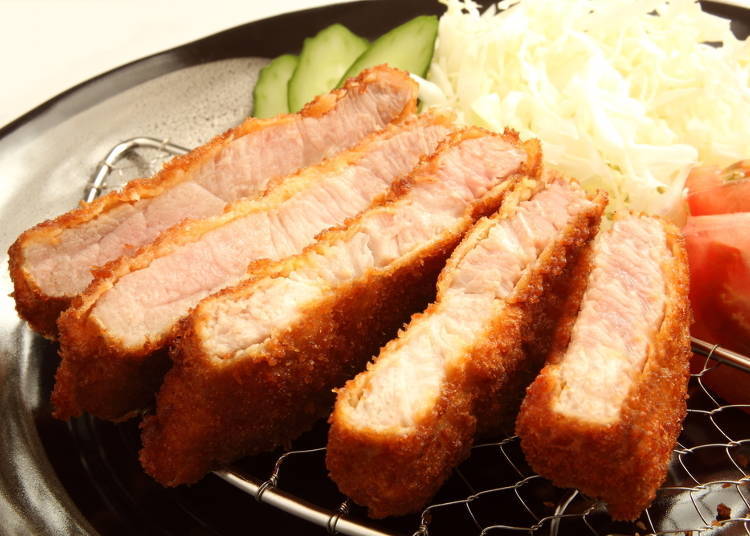 “When I was living in the U.S., a restaurant that serves Japanese tonkatsu opened and our family decided to try it out. After a few hour drive we arrived at the restaurant and the tonkatsu that was served was so greasy that it would slide on the plate and the meat was dry. It wasn’t good at all, however tonkatsu in Japan is amazing! The biggest difference is the exterior. The panko sold in the U.S. is much finer and I think it’s not suited for tonkatsu. Also in Japan you can select different meat types such as rosu (chuck) or hire (filet), unlike the store in the U.S.” (America/30’s/Male)

Like tsukemen, tonkatsu is introduced in various media as a dish that represents Japan. Things that make tonkatsu delicious, like the rough panko that makes the crisp texture and being able to select what type of meat are normal to Japanese people.

The American man who answered the survey said that if he was asked “what is something delicious in Japan?” by a foreign visitor, he would recommend tonkatsu.

According to the survey three fried foods, tempura, karaage and tonkatsu made the list! The crisp batter and frying it so the meat is juicy might be a specialty of Japan.

Also we asked “how about sukiyaki?” and most people answered “I haven’t tried it in Japan.” To think about it, it is understandable, as a Japanese person we don’t have much of an opportunity to eat sukiyaki at a specialty shop.

Japanese fried food praised by people who are used to their own countries fried food. With an unexpected result, we were able to see the charm of Japanese food from a different angle.