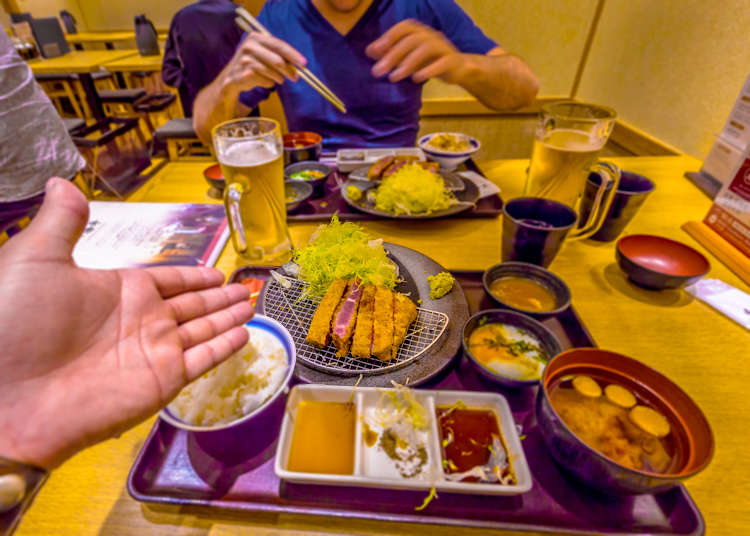 In stark contrast to Japanese cuisine’s image of being all healthy, there is a bad boy side too.

It might seem like Japan is a country which is all sushi and small dishes, but during both night and day it zips on its leather jacket, slips on a pair of sunglasses and gets up to mischief.

I am of course talking about Japanese fried foods, in other countries the worst thing you might come across is fried chicken, but in Japan you can come across fried anything – literally anything apart from a fried chocolate bar. 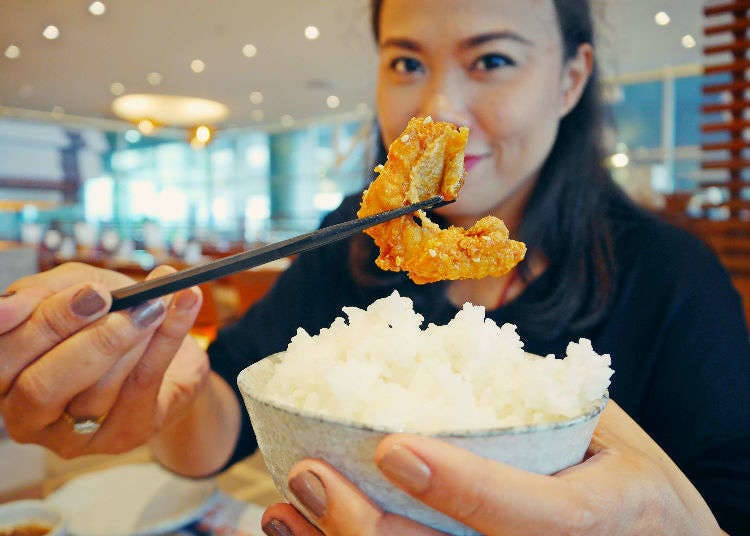 Though it is perfectly possible there is something similar somewhere in Japan! Fried food is to Japanese people as a certain hamburger chain is to American people: it is everywhere and is enjoyed morning, day and night.

It is a major plank in the Japanese diet, and characteristically for Japanese food the cooking process is very careful and perhaps lighter than elsewhere in the world. To a certain extent it is less greasy than fried foods in other countries, but saying that, cheap fried chicken in a Japanese convenience store can still be pretty oily!

Traditionally speaking, Japanese cuisine was centered on ingredients like fish (raw and pickled), vegetables and tofu. However when Europeans landed in the 16th century, in the form of missionaries and traders, they also brought with them some of their own food culture such as fried vegetables.

Being Christians they would abstain from meat during Lent, and would deep fry vegetables for their meals – by that point they had been deep frying food for hundreds of years already – and they taught this method of cooking to Japanese people.

Over time they perfected their frying techniques, as well as applied it to other foods, until today it has become part of lunch, dinner and casual snacking. So many different ingredients are fried now; it is sometimes a little bit hard to know what you are actually looking at! 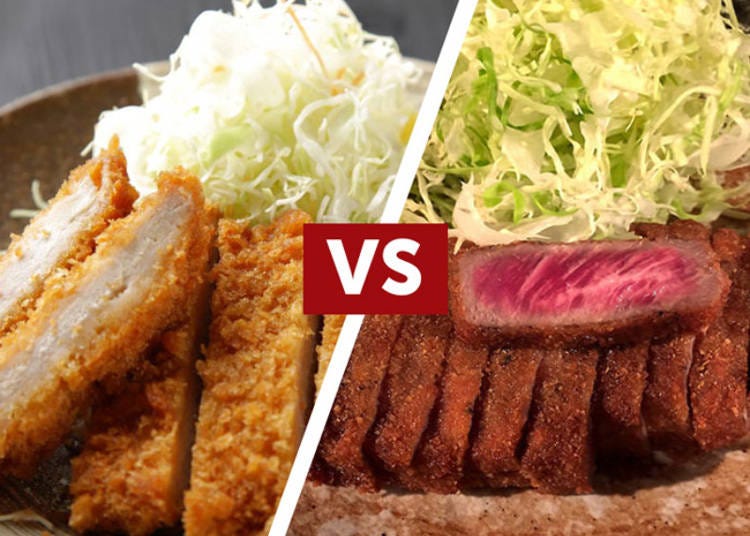 Gyukatsu, crumbed and fried beef cutlets, is a newer kind of cooking as this kind of cuisine (from the Kansai region) usually uses pork, called tonkatsu.

So on the surface they can sound like the same thing, just using different meat, both are covered in a breadcrumb coating and deep-fried, but the pork version is cooked thoroughly while the beef version is crisp on the outside but medium rare inside.

This cooking method appeals to the Japanese love for a variety of textures in their food, with the soft and juicy texture of the beef contrasting with its crispy coating.

At some restaurants you can have your gyukatsu cooked just the way you want it, an experience you can’t enjoy with tonkatsu.

Condiments also differ between the two–where tonkatsu comes with a Worcestershire-like sauce or Japanese mustard, its beefy cousin is usually eaten with wasabi, rock salt and soy sauce. 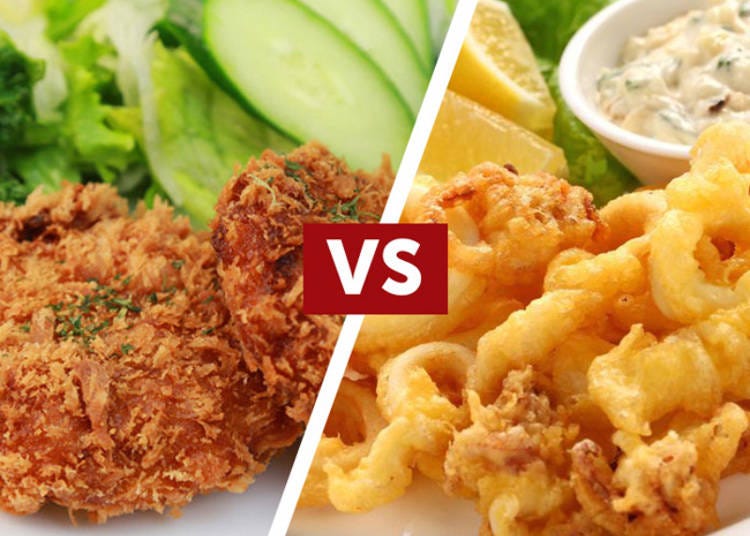 Ika menchi is a close cousin of the satsuma-age, as it is made of fried fish paste with bits of squid inside it for added chewiness and taste. Ika tempura on the other hand, tempura-battered and deep-fried cuts of the squid.

Ika tempura is served with salt or tsuyu (a light soy dipping sauce). The ika menchi is usually eaten on its own or with soy sauce, wasabi or Japanese mustard for a bit of heat. 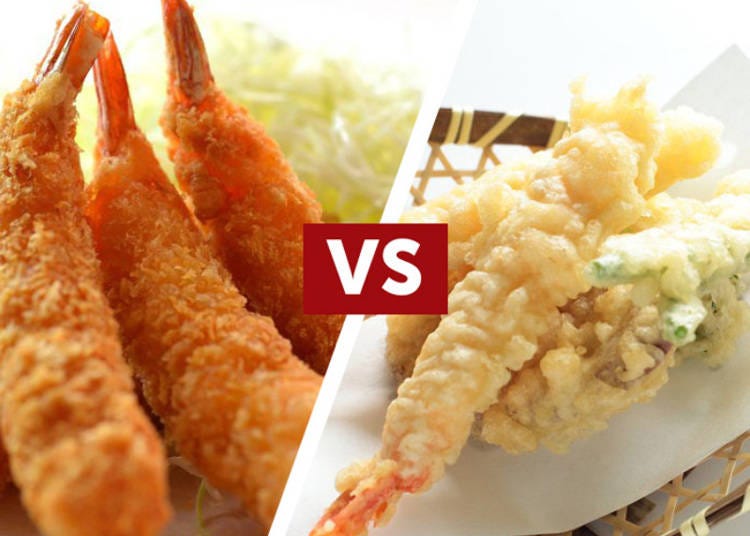 Ebi means shrimp, and you will be forgiven for thinking fried (furai) ebi and tempura ebi is the same, but actually they are cooked differently which means they taste different too.

Generally speaking one main difference is the coating, Ebi furai is lightly dusted with flour, dipped into a beaten egg mixture, then finally coated in breadcrumbs and deep-fried until it forms a crunchy, golden brown shell.

In contrast tempura has a light batter made using water and flour, the ebi is dipped in the batter then deep-fried until it is a delicate light yellow-gold color. Its coating is usually thinner than that of an ebi furai. 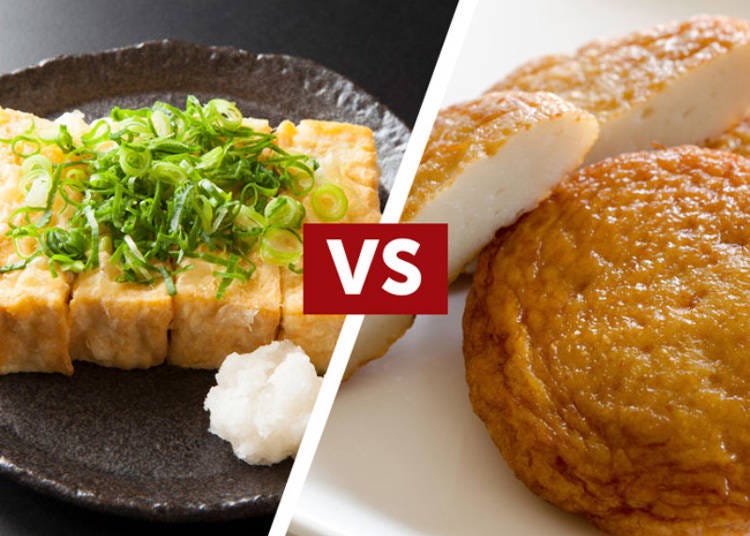 These two look pretty much the same until you bite into them! They are very different deep-fried dishes, agedashi tofu is made from tofu that has been coated in a thin layer of cornstarch and deep-fried to create a crispy, chewy texture on the outside and soft inside, while the satsuma-age is a patty of minced fish and flour that has been pounded into a paste, shaped and then fried.

Furthermore, satsuma-age can incorporate different ingredients like vegetables and octopus, while the agedashi tofu is kept plain, and served in a simple dashi broth. 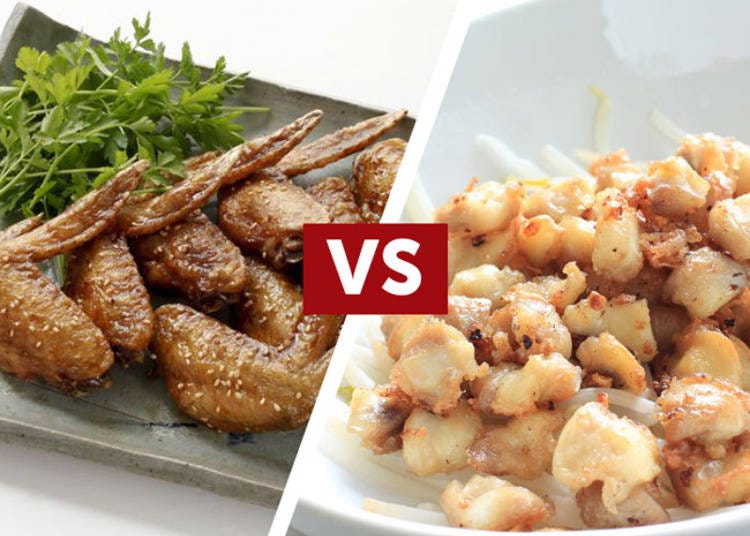 Fried chicken wings are enjoyed the world over, they are easy to eat as a small bite and very popular as a side-dish, there aren’t that many people who don’t like them, and the Japanese are no different.

Tebasaki refers to a kind of Japanese fried chicken wings, these are cooked in a variety of flavors depending on the region, from simple salt and pepper to a mix of spices and sauces. Some areas are particularly famous for tebasaki, such as Aichi Prefecture where it is a recommended dish, and souvenir gift.

Nankotsu can look pretty similar sometimes to tebasaki, depending on the ingredients and how it is cooked, but it is actually a dish of fried chicken cartilage, which is popular for its crunchy texture. Nankotsu is usually fried in a batter and flavored with some salt and pepper, with a less variety of flavors than the chicken wings. 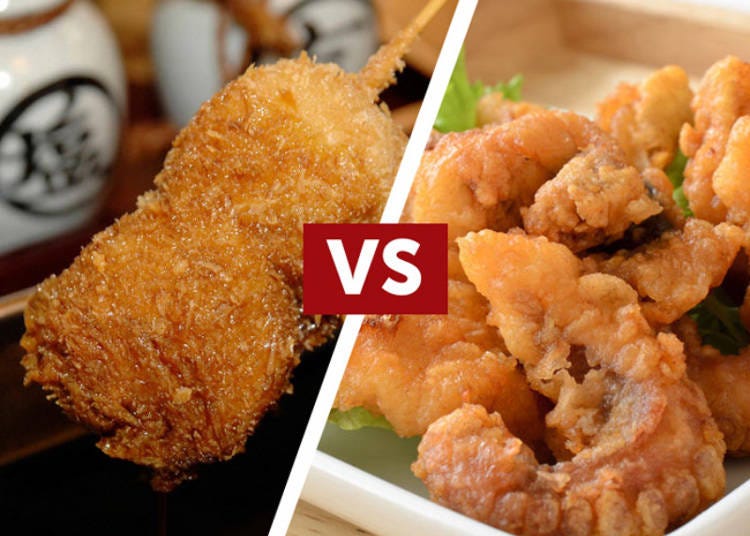 In Osaka, in Japan's Kansai region, the locals decided that grilling food, like yakitori, takes way too long, so these ever-practical and ever-food obsessed chefs realized it would be much faster to fry their dishes rather than waste time grilling their skewered food. So kushiage was born out of a wish to quickly cook food.

Aside from the main difference of tako (octopus) kushikatsu being served on a stick and tako karaage consisting of chopped bits of octopus, is the coating.

Where tako kushikatsu is covered in breadcrumbs for a crunchier texture that is designed to soak up as much Worcestershire dipping sauce as possible, the tako in a flour batter and served with mayonnaise for extra creaminess. 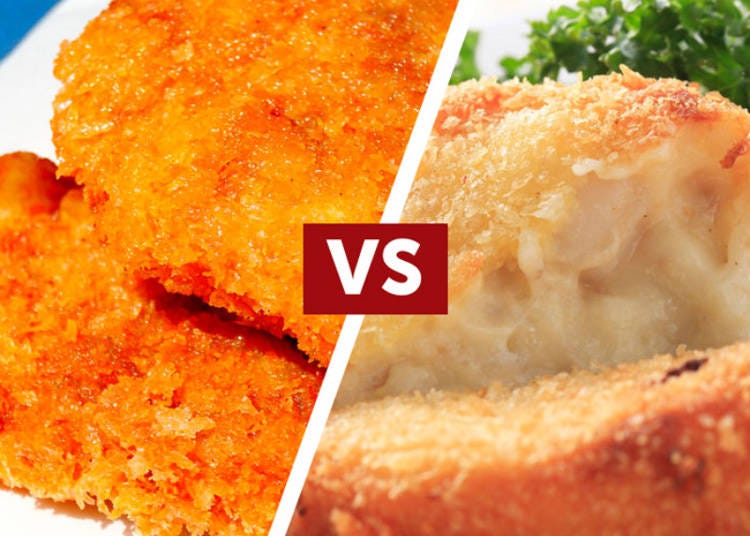 Menchi is the Japanese term for mince, and a menchi katsu is refers to a mince patty–either pork or beef or a combination–inside a fried breadcrumb coating. Korokke is a derivative of the French original, a potato-based “croquette”.

Korokke in Japan is also mainly potato-based, and includes small bits of beef, pork, cheese and other ingredients in the mixture, before being crumbed and deep fried. It’s one of the most popular Japanese fried foods at convenience stores, street food stands and izakayas. Both are commonly eaten with Worcestershire sauce or karashi. 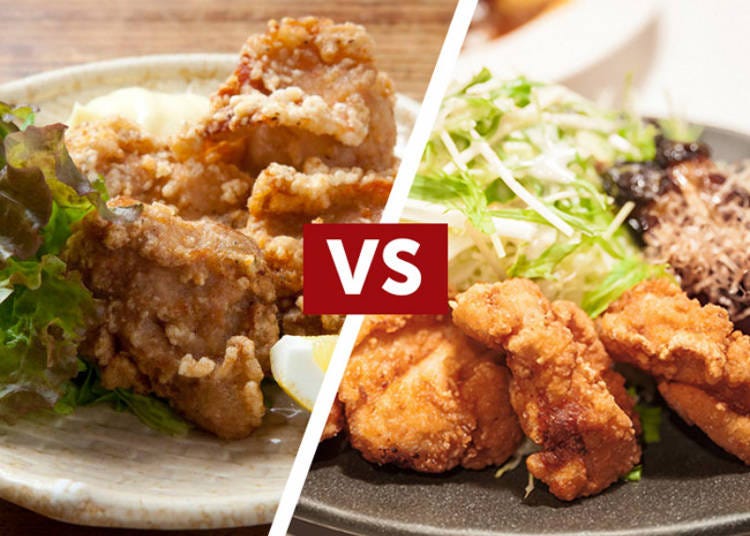 To a certain extent it is easy to assume that all fried chicken pieces in Japan are karaage, so it may be hard at first glance to tell the difference between tori karaage and tatsuta-age.

However the differences come from both the coating, and the condiments, which are used for these deep-fried chicken dishes. Where tatsuta-age is powdered with only potato starch, so it has a thinner coating, tori karaage is also dipped in wheat flour for a deeper color when it is fried.

Finally, there is fried chicken such as that sold at convenience stores, often served up as flattish pieces of fried chicken; there is usually a spicy version and a regular version. Comparatively speaking the taste is juicier, greasy, and therefore it is more fatty.

It might seem like Japan has not only a lot of fried food, but a lot of similar looking fried foods! You are probably now thinking that Japan isn’t such a healthy country after all, but as in all things Japanese people eat in moderation – it certainly isn’t recommended that you make a habit out of eating karaage or tempura every day.

In a bento box you might find a couple of pieces of fried food, unless you go all in on a lunch that consists of just fried chicken and rice, while in the evening in an izakaya there might be just one small dish of fried food amongst a number of different plates.

So you don’t have to panic just yet, wondering if you are facing tako kushikatsu vs tako karaage, the best thing to do is make a game of it! See if you can guess what your friend has ordered, or what you have ordered by guessing.