HOME Must Do In Tokyo: Top 8 Places To Visit in Tokyo (1-Day Plan) 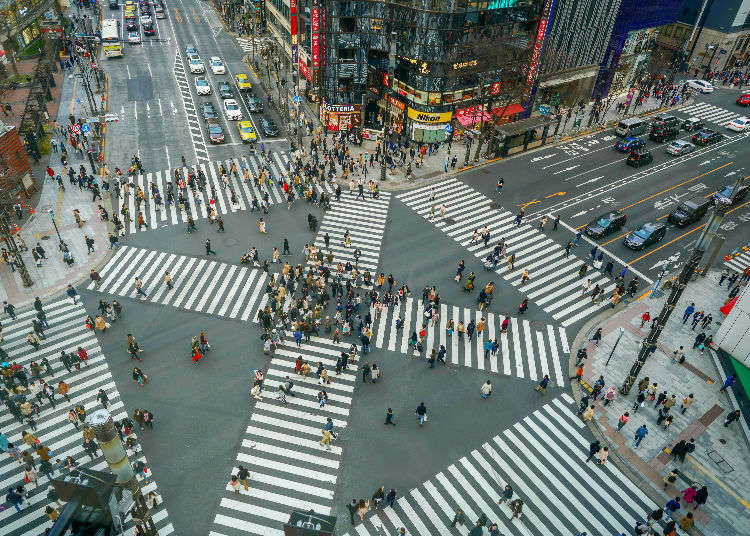 Must Do In Tokyo: Top 8 Places To Visit in Tokyo (1-Day Plan)

Chances are that your journey to Japan will begin and end with Tokyo! This one day plan is filled with perfect places to visit in Tokyo. Whether it's your first time or you're a seasoned traveler, you'll find your perfect fit with this list!

Tokyo is one of the biggest tourist attractions in Japan. Formerly known as Edo, it was a small fishing village that became the center of Tokugawa Ieyasu’s government in the 16th century.

In 1868 it became the official capital of Japan and renamed as Tokyo, and since then it has been rebuilt after being hit by disasters as well as devastated by war.

In 1964 the summer Olympics were held in Tokyo, and in 2020 the Olympics are coming back once again to one of the greatest and most prominent cities in the world. By the late 1970s, the metropolitan area population reached eleven million, and today nearly forty million people live here.

As Tokyo has such a long history and covers a lot of ground, it means that there is a huge amount to see and do – but as Tokyo is so well connected even if you only have one day in this city, because of a layover or a connecting flight, you can really pack in a lot.

To help you even more, you can get a Tokyo 1-Day Ticket, which allows unlimited use of all the subway lines and JR lines for just 1,590 yen, or a Suica or PASMO card, which can be recharged and enable easy use of the subway.

If you are staying longer or visiting again, then the possibilities are almost unlimited: Tokyo Disneyland can take a whole day or two days, there are many recommended area tours such as going to Yokohama, or spend your time walking around and see what you can discover! 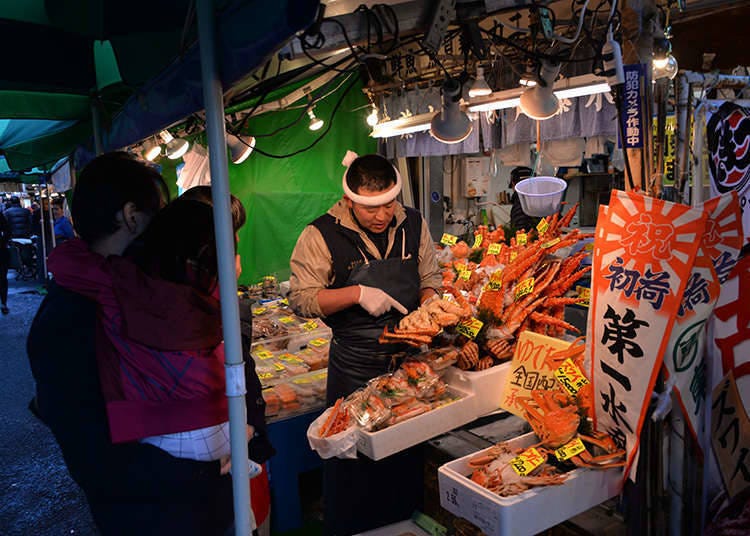 Once the most famous fish market in the world, Tsukiji is still almost a pilgrimage-like site in Tokyo for both sushi lovers and the curious.

While the morning tuna auctions have moved to Toyosu Market, it's still a sensational spot to walk around early in the morning. (But you can come anytime just to walk around the area and it is never too early to eat sushi at one of the amazing eateries!)

As such, this is a good place to start your day in Tokyo, of course, no one likes getting up early but by being in Tsukiji in the morning you are in a perfect position to see a lot in one day! 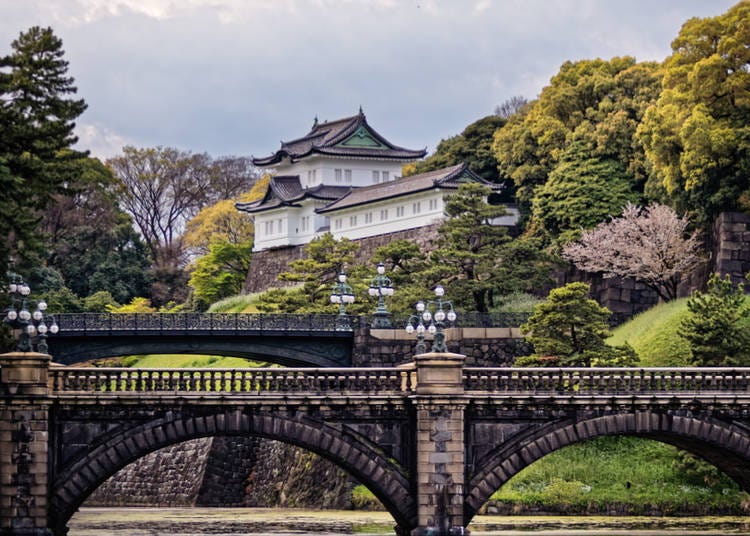 From Tsukiji you can take a bus, or walk through, the Ginza area towards Tokyo Station. This shopping area is very popular with many department stores as well as lovely cafes which are perfect for people watching.

So, be careful as you might be tempted to stay in Ginza for a while! At Tokyo Station, you can enjoy the old twentieth-century building within which it is based and also buy some Tokyo Station sweets as a souvenir while you are there.

It is then a fairly easy walk to Tokyo Imperial Palace. Built on the site of the old Edo castle, the current palace was built in the 1960s and is the home of the Japanese royal family.

The palace and gardens are surrounded by a moat, which along with the bridges that cross the moat, creates a lovely place for one to take a stroll as well as lends itself to photos for your Instagram account. 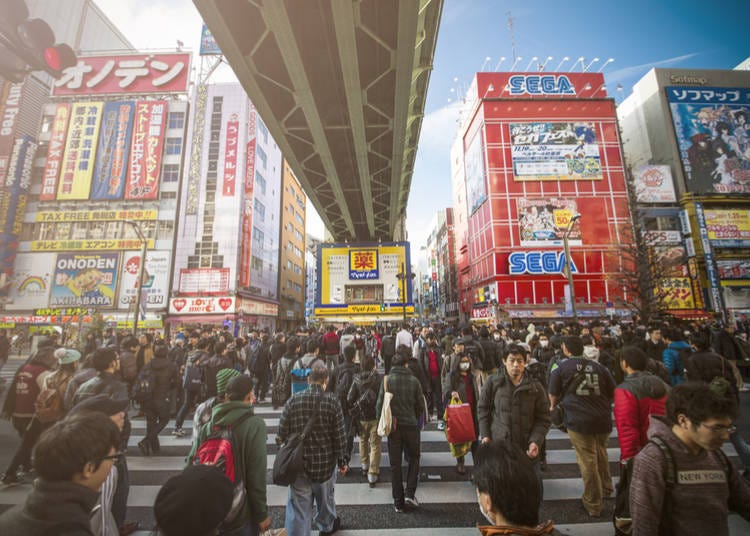 Where the palace and surrounding grounds are a reminder of the history and traditions of Japanese culture, Akihabara consists of the bright lights of the future.

Also known as Electric Town, this is the place to go to for anything anime or manga related, as well as idol fans and more. Whether you are familiar with this sub-culture or not, it is worth taking a look around the shops to see some of the amazing things on for sale which ranges from old videogames to countless anime figurines.

Finally, it isn’t quite a trip to Japan without visiting a maid café, and playing a game with a maid (who may or may not place a magic spell on your food or drink). 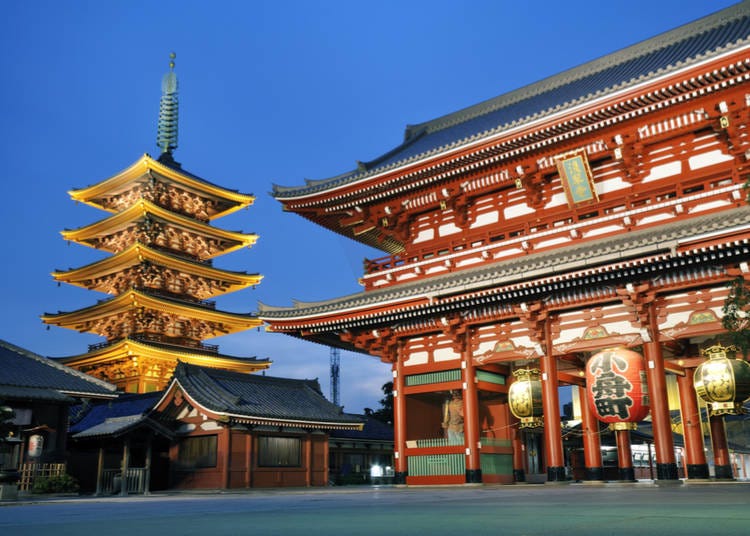 Akihabara is well connected to Asakusa via the Tsukuba Express train line.

Again here you will find a massive contrast between the electric town you just left and the more traditionally looking, yet busy, area of Asakusa.

There is a lot to explore in this fascinating area, including Sensoji Temple; there is also the Nakamise shopping street which leads from the Kaminarimon entrance gate to the temple.

This street, and the surrounding streets, is often filled with people wearing traditional kimono, while on the main roads it is possible to go on a rickshaw tour pulled by people wearing old-fashioned clothing.

A local food to try is Kaminari-okoshi while just across the river from Asakusa you can see the incredibly tall Tokyo Sky Tree and the unusually shaped golden flame atop Asahi Beer Hall. Asakusa is also a good choice for lunch with many different restaurants, such as tempura at Daikokuya Tempura Honten. 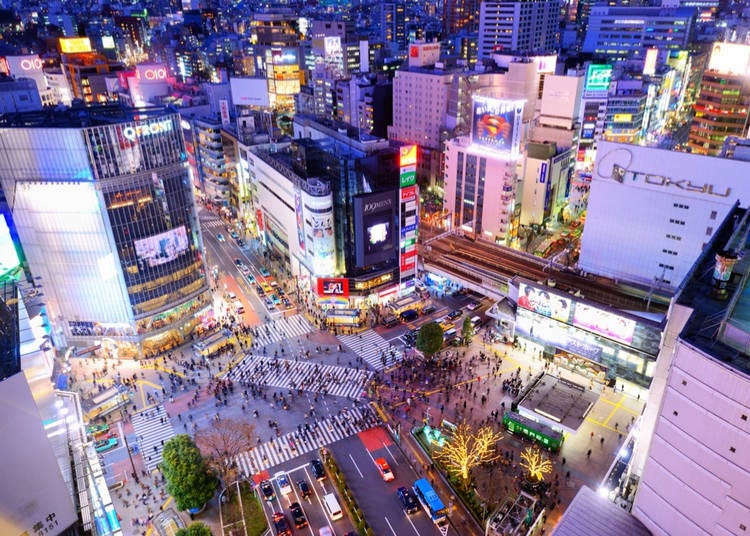 From Asakusa, you can jump onto the Tokyo Metro Ginza Line and 30 minutes later find yourself in one of the most iconic places in Tokyo.

It isn’t often that a crossing becomes famous, after all, it is just a method to get from one side of the road to the other, but after being featured in such films as Lost in Translation and The Fast and the Furious: Tokyo Drift, the intersection at Shibuya has entered international consciousness.

Shibuya Crossing has in some ways become representative of Japan, and for many tourists, a visit to Tokyo isn’t complete without crossing this road.

In addition, those people familiar with the story of Hachiko – the dog which came to Shibuya Station every day loyally awaiting its deceased master – won’t want to miss Hachiko’s statue in front of the station. 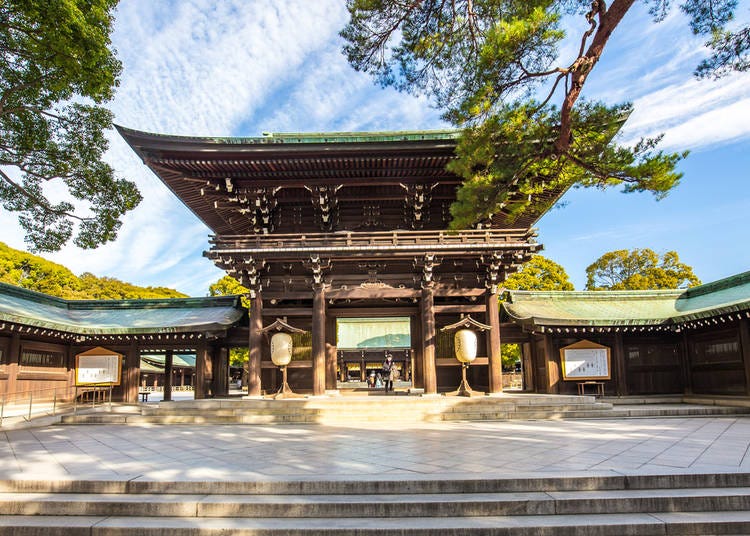 Just one stop away from Shibuya on the Yamanote Line will land you in Harajuku; near here you will find the Meiji Jingu Shrine.

This shrine is located next to Yoyogi Park and is dedicated to Emperor Meiji and the Empress Shoken who passed away at the beginning of the 20th century.

The forested area of the shrine and the park itself include tens of thousands of trees, and regardless of the time of the year it is a very nice area to walk around, but it is especially popular during cherry blossom season in the spring.

The shrine itself is very famous, and normally millions of people visit in the beginning days of each New Year, in addition, there is the Meiji Jingu Treasure House which displays many items related to Emperor Meiji. 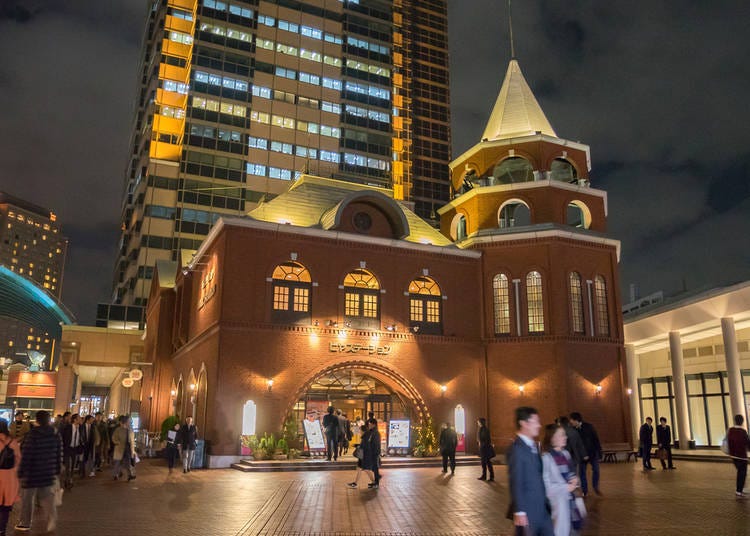 You would have to go pretty far afield to go see a sake brewery in Tokyo as they are all quite far away, but going on a tour of a beer brewery is quite easy!

After you have paid your respects at the Meiji Jingu Shrine you can get back on the Yamanote line for just two stops south to Ebisu.

Here, at the Yebisu Beer Brewery you can learn about the history of Yebisu beer brewing in Japan, including finding out about the interesting fact that a bottle of beer once cost more than the price of dinner, and you can also taste some beer (which is never boring!).

If the beer tasting doesn’t sate your thirst then there is a bar as well where you can drink some more. The museum is situated in Yebisu Garden Place – a very pleasant area which has restaurants, shops and department stores. 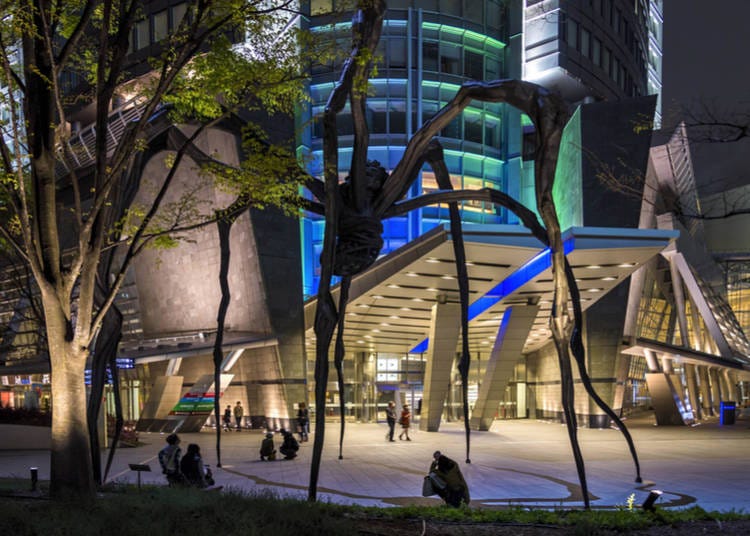 Finally, at the end of what has been a very long day – and if you are able to tear yourself away from the beer brewery – it is nice to end the day at Roppongi Hills.

From Ebisu Station, you just need to get on the Tokyo Metro Hibiya Line for two stops to Roppongi Station.

Roppongi Hills was built along the concept of it being a city within a city, a place where people can live, shop and work without having to travel far, as such it is quite a fascinating area to visit.

It was completed in 2003 and incorporates gardens, museums, luxury shopping, restaurants and more. It can be a bit confusing to walk around so definitely get a map before you start exploring!

Another must-do for Japan is going to an izakaya, a kind of Japanese pub, so check out somewhere like the izakaya Gonpachi as the sun goes down and enjoy some real Japanese food. 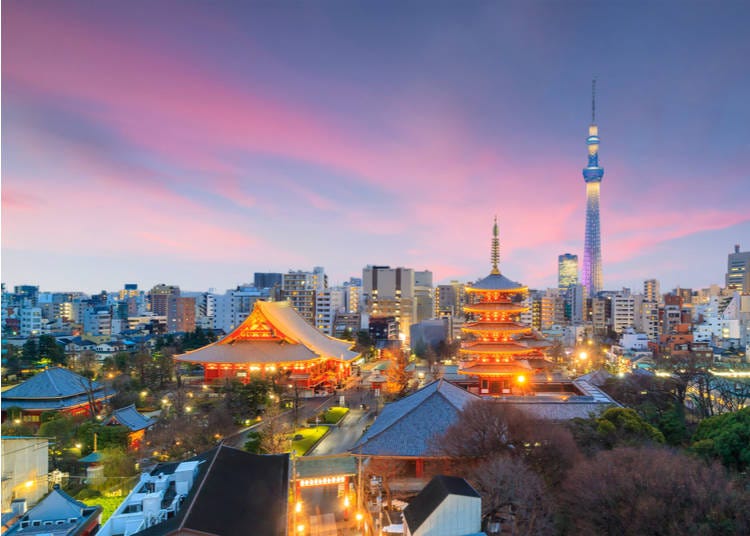 Tokyo is so large that one day is not nearly enough to see everything that this great city has to offer, while people who live here are still discovering new things all the time, however, with a little planning, it is possible to see a great deal in just a little time.

Special tickets like the Tokyo 1 Day Ticket really enable visitors to whizz across this great city in no time, and as most stations are quite well connected you can really see a lot! It can be a bit intimidating using the subway for the first time, but there are usually stations and line names in English, and station staff is generally very helpful and kind.

Another tip is to get a Japanese SIM card or pocket wifi router when you arrive in Japan so that when you are out and about you can use a map app like Google Maps – that way you can easily find your way around. Especially, when you are trying to see a lot in one day being able to use a map which shows your location is a lifesaver and will really be a great help in seeing as much as you possibly can.

The only problem with doing so much in one day is that you will end up taking so many photos you won’t know what to share with your friends online!

Hop On the Sky Bus and Explore Tokyo From Up Above!
Venture on to Kamakura - "Enoden Tour Part I: Around Kamakura Station"
How to Save Money with Japan's Amazing Rail Passes!
What to Pack for Japan: 8 Essential Things You’ll Want To Bring on Your Japan Trip

The following budget-friendly hotels are in excellent locations for this itinerary.