HOME Become a True Gundam Pilot - Stepping into the P.O.D. at a Tokyo Arcade! (Video) 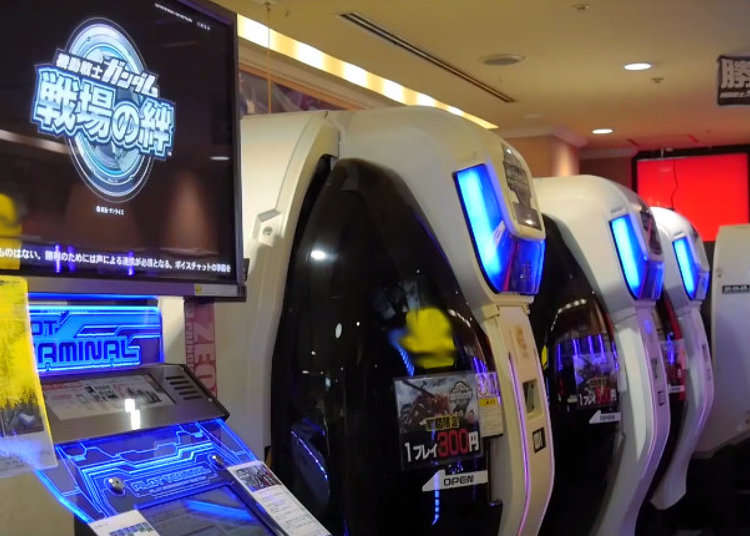 Become a True Gundam Pilot - Stepping into the P.O.D. at a Tokyo Arcade! (Video)

Japan and robots go together like a hotdog and mustard. One of the nation’s most famous robot exports is known worldwide simply as “Gundam.”

What started out as an anime has become a huge franchise with its own games, movies, and even a life-sized statue in Tokyo’s Odaiba.

What many people don’t know, however, is that there is a way to pilot your very own Gundam robot!

Step in the P.O.D. and Start Your Engines 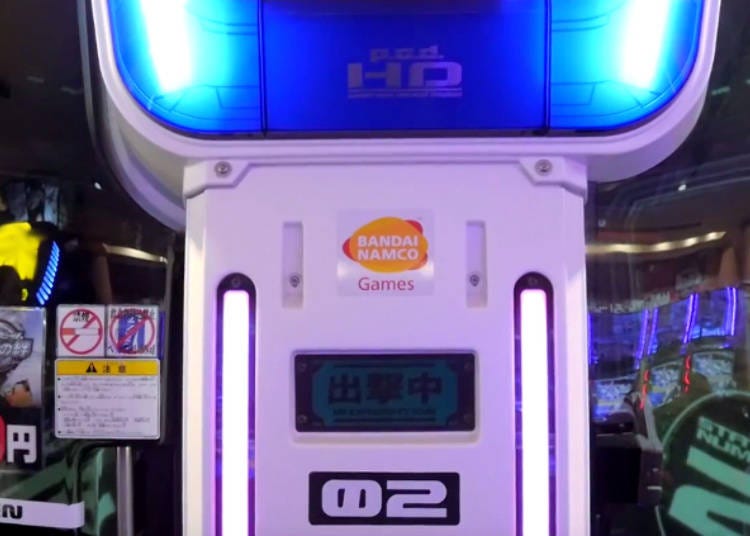 You may be wondering how this is possible. Let me introduce you to the ultimate Gundam experience: “Kido Senshi Gundam: Senjo no Kizuna” (Mobile Suit Gundam: Bonds of the Battlefield). This game, originally released in November 2006, involves taking a seat inside a P.O.D. (Panoramic Optical Display), otherwise known as a pod, to simulate the experience of being a Gundam pilot! Bonds of the Battlefield can be found in pretty much every big arcade and game center in Japan, but the one I played was right in Shinjuku, at the TAITO Game Center. Did I survive the battle? You’ll just have to keep reading to find out! 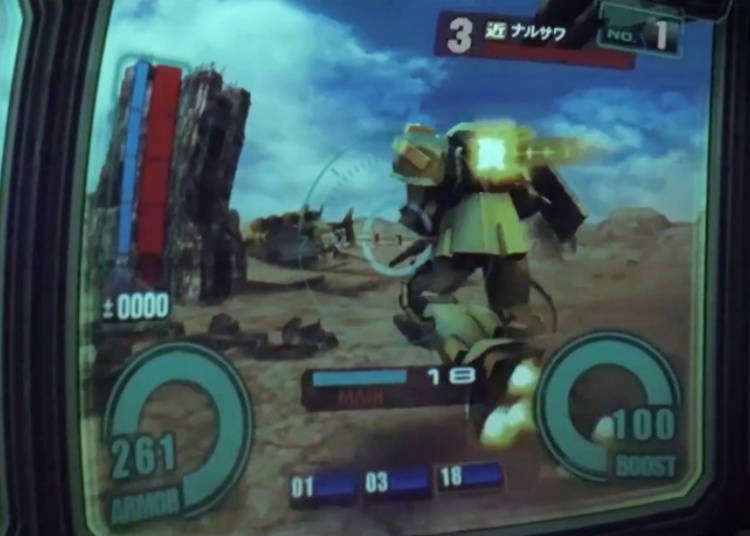 For 300 yen per round, you get to pilot your very own Gundam and choose different battle options. The most popular one is the 4 vs 4 multiplayer game (the maximum is eight versus eight), where you'll be fighting along with three companions against four players of the enemy faction. Each game lasts roughly 10-15 minutes, depending on how long the battle takes. 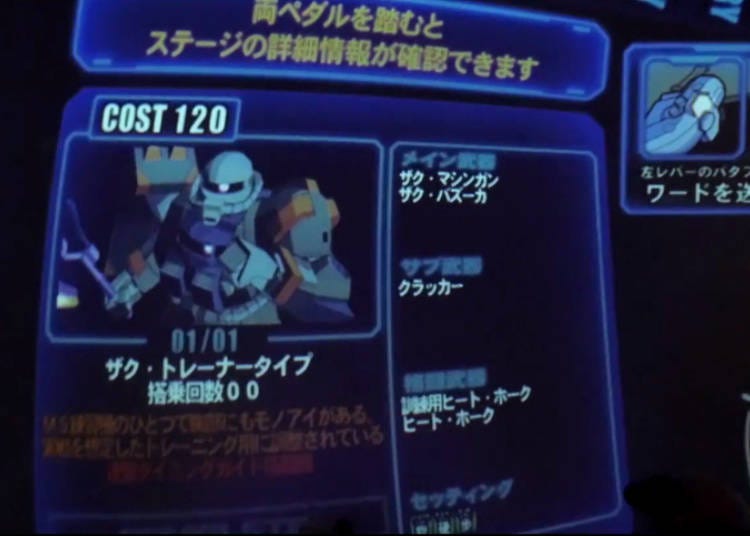 Before entering the battlefield, you will have to make some difficult decisions. First, you must choose which team you want to align yourself with, either Earth Federation or Principality of Zeon. I chose the latter for no other reason than I like the color red. You’ll also have to choose the type of mobile suit and weaponry to use in battle. If you’re not sure which to choose, you can always pick one at random, like I did, or try a variety if you play a few times. 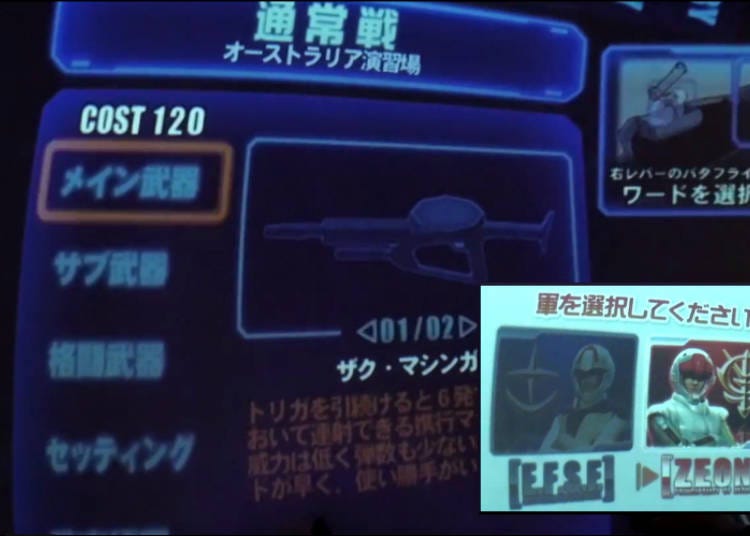 Hardcore gamers will most likely want to create a “Pilot Card” for 300 yen each. When players create their own card they choose a pilot name, clothes, and even a voice. The card will contain various information about your gameplay including your platoon, ranking, points, and kill number. Beginner players can indicate whether they would like to start fighting alone, or with other beginners. Once a pilot is promoted to Private Second Class rank, they are able to battle on the main map. After each gaming session is finished, players visit the pilot terminal and collect points earned, as well as new mobile suits, and other upgrades. Because it was my first time, I didn’t create a card, but I had so much fun that I just might consider creating one in the future. No matter how you play, you’re sure to have a good time!

How to Pilot the Gundam 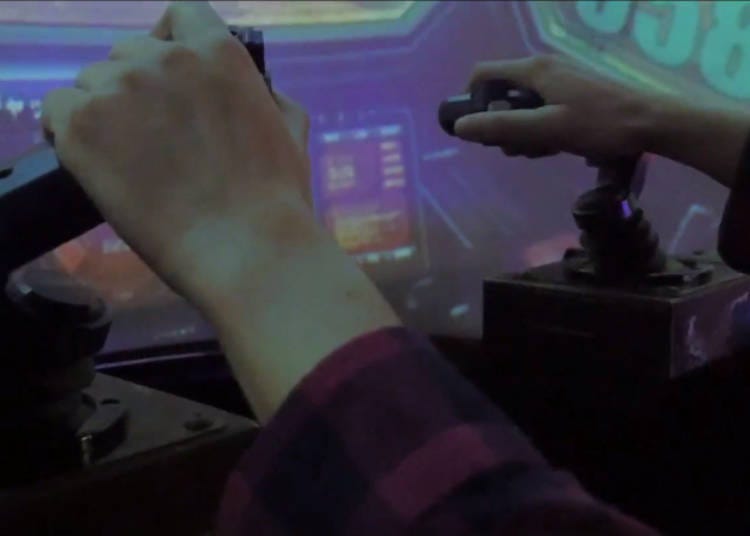 Inside the cockpit, you’ll find two joysticks, pedals at the bottom, and a headset right next to the seat. Piloting your Gundam with your hands and feet is as close to the actual thing as it gets – and so much fun! To make the most of this game, you are going to want to use teamwork. For this reason, players are encouraged to use a microphone headset, either the one provided or their own. (However, the voice chat only works between team members within the same arcade.) One of the most popular features of this game is that you are playing as part of a team. If you visit the game center with friends you can all play together. Otherwise, you will be matched up randomly with other players in the arcade, in the country, or internationally. As it was pretty early in the morning when I arrived at the game center, it was not peak gaming time, and I ended up joining forces with computer players. 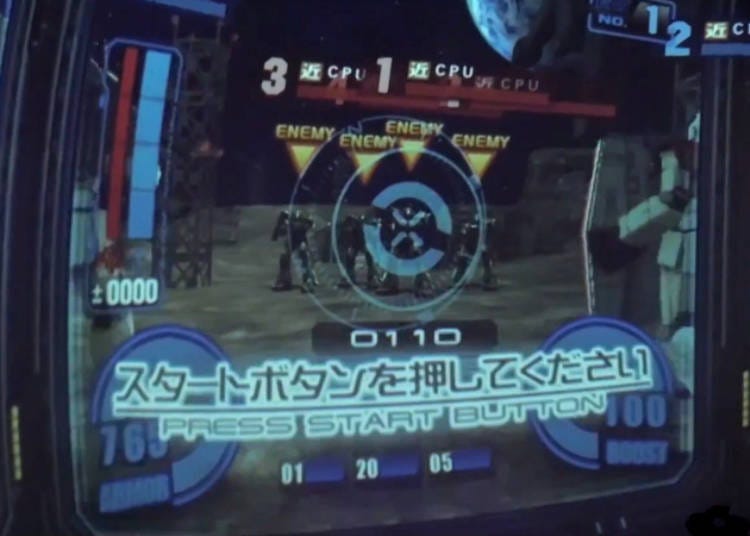 Completely different from any console game, the pod really does an amazing job of making players feel like they’re sitting in an actual Gundam. The massive, concave screen, combined with surround sound, makes the illusion perfect.

The two hand-operated levers control the mobile suit’s legs. If you push them both forward, you will advance. Pull them back, and you will reverse your movement. Holding the levers in alternate directions will allow you to turn, and most fun of all, by pulling the levers apart, you can grapple enemies! The two pedals by the floor allow you to jump and dash, movements that are limited by a “boost gauge,” which can be replenished over time if used up. 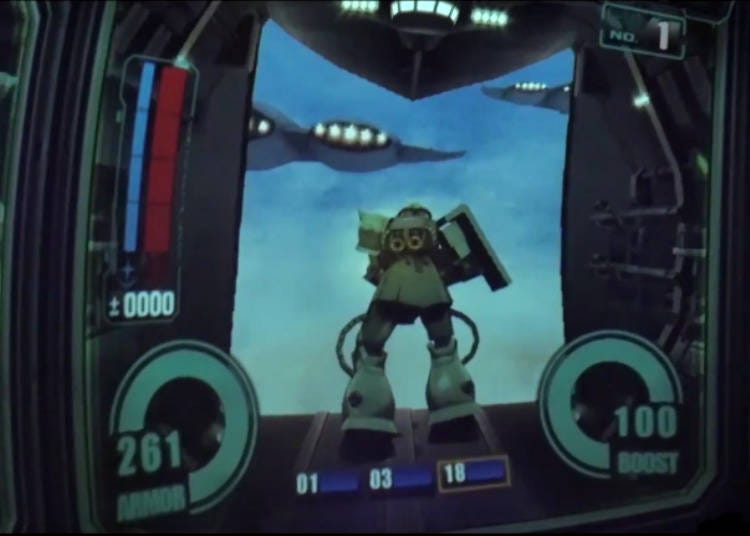 I promise you this: Once you’ve drawn virtual first blood, you won’t be able to stop!
I am by no means a professional mobile suit pilot, but it really didn’t take long before I had started to get a hang of the controls. If all else fails, target the enemies (you will know this because they are clearly labeled as “ENEMY”) and use one of your weapons to bring them down. 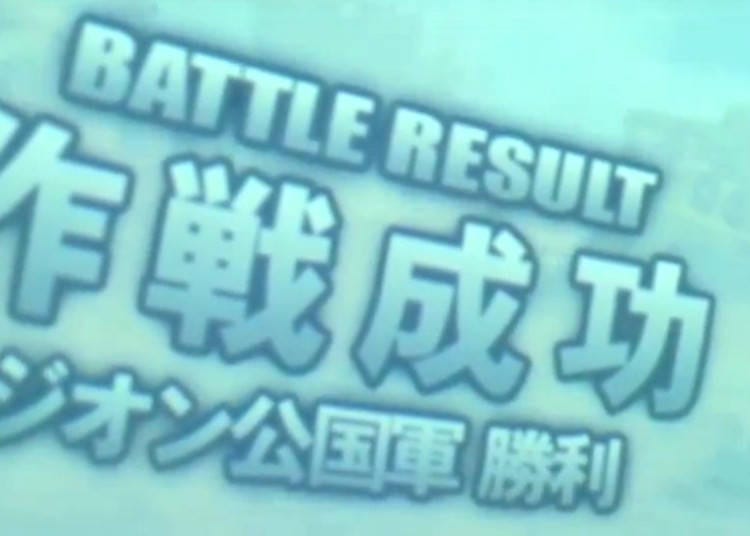 I’m not exactly sure how I did it, but I managed to clear the battle on my first try! I’m sure If I continued playing the more advanced stages, it wouldn’t be so easy, but for the time being, I was satisfied.

Become a Gundam Pilot and Live Out Your Anime Fantasies! 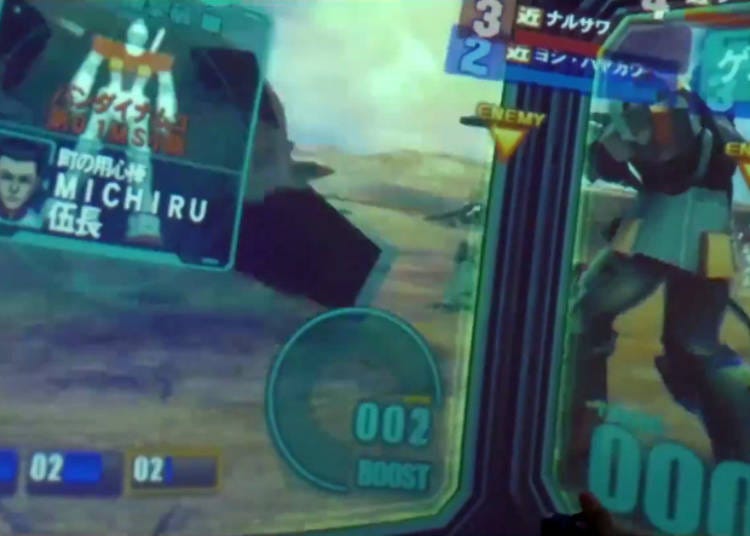 I may never be in the cockpit of an actual Gundam, but sitting in the pod felt close to the real thing! Fans of the series will get a nostalgic kick out of becoming one of their childhood heroes, and gamers will appreciate the cooperative gameplay. Even if you're not a huge fan of the Gundam installments, you should try this unique experience nonetheless. But be careful, you might just get addicted to piloting!