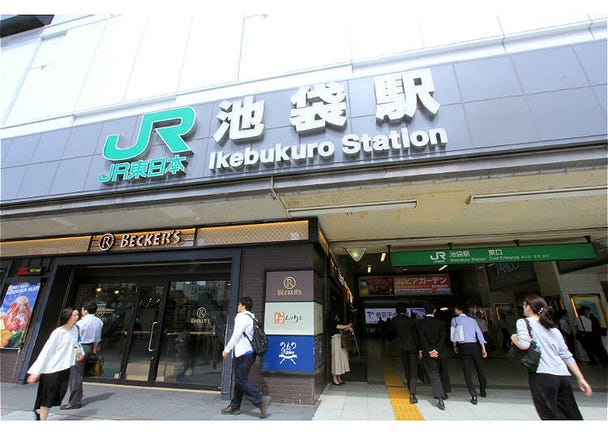 Ikebukuro is one of Tokyo’s three major sub-centers and the central hub of the northern JR Yamanote Line. Thus, the gigantic Ikebukuro Station acts as an important hub that connects 2.62 million passengers on average each day (as of 2015, with 4 railway companies combined) - this makes Ikebukuro Station the third-largest station in the world.

The Ikebukuro area itself has a lot to offer in terms of amusement and sightseeing, so knowing the station, its exits, and its lines are crucial for both tourists and Tokyoites. We compiled a complete guide to Ikebukuro Station that will ensure that you won’t get lost! 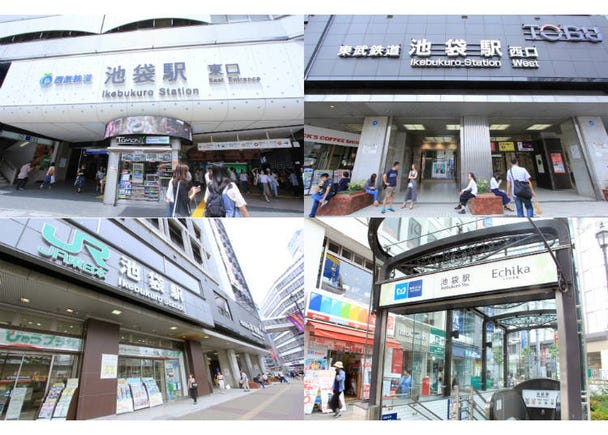 4) Passageways offer easy access to and from the station premises
Ikebukuro Station has three main connecting passages and those that link the north to the south. The passages that connect the North Passage to the Central Passage from the east side are called Cherry Road and Apple Road, while Azalea Road and Orange Road link the Central Passage to the South Passage from the east side.

――About the Exits
5) Don’t confuse “Seibu East Exit” with JR’s “East Exit”
Ikebukuro Station has two exits on its east side: the Seibu East Exit and the East Exit. The Seibu East Exit is on the east side of the Central Passage and you have to go up some stairs to reach it. If you’re coming from the Seibu Line and the Tobu-Tojo Line, it is right in front their respective central ticket gates.
JR’s East Exit, on the other hand, is on the east side of the North Passage, leading up a staircase as well. Access the East Exit from the northern ticket gate of JR and Tobu-Tojo Lines – simply look for the sign that says “JR Ikebukuro east Exit.” A lot of people confuse these two exits, so keep this in mind!

6) There is a South Exit on the east and west side
Ikebukuro Station also has two south Exits. Follow the South Passage from the West exit side and go up some stairs to reach the west side’s South Exit. It is close to the Seibu Line’s south ticket gates, and from the outside, it is marked as “Tobu Ikebukuro Station South Exit.”
The Seibu South Exit, on the other hand, can be found a bit south from the East Exit. 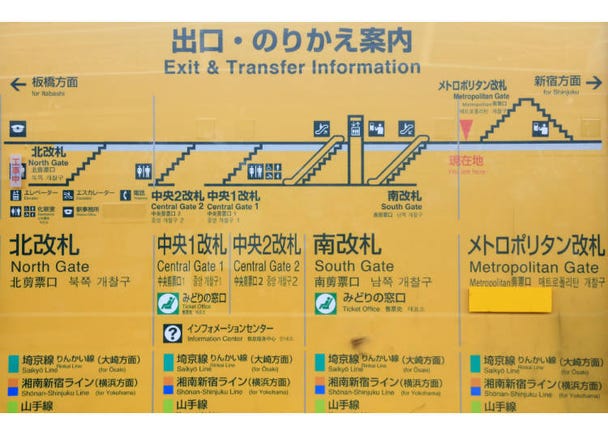 The exit and transfer information at JR’s platforms.

2）The Structure of Ikebukuro Station 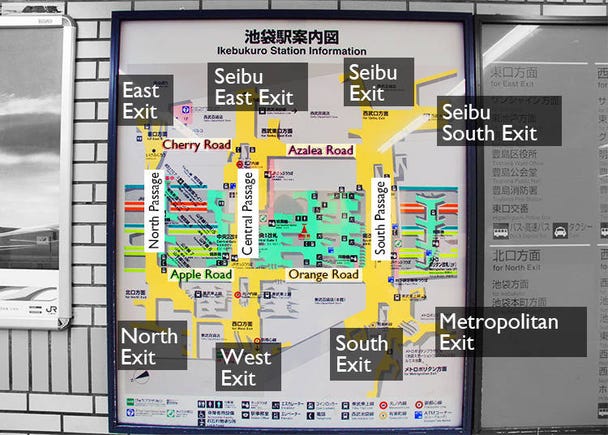 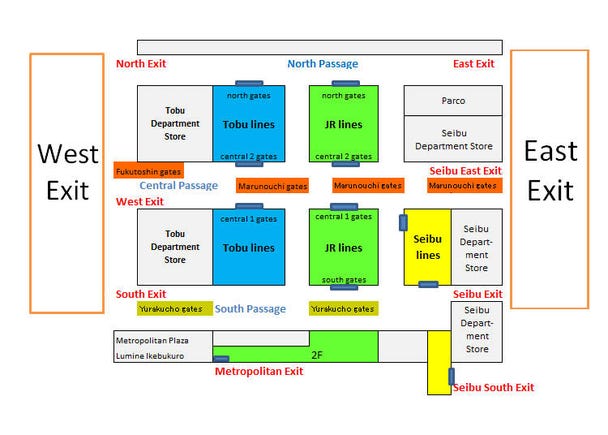 3) The Main Lines of Ikebukuro Station and Their Destinations 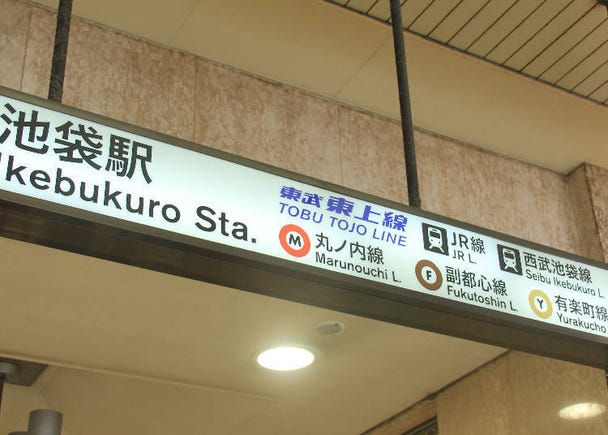 Ikebukuro Station is served by four railway companies in total. Next to the JR lines, there is also the Seibu Ikebukuro Line of Seibu Railways, the Tobu-Tojo Line of Tobu Railways, and the Marunouchi Line, Fukutoshin Line, and Yurakucho Line of Tokyo Metro.
Especially JR’s Yamanote Line and Tokyo Metro’s Marunouchi Line offer convenient access to various sightseeing spots, while the Seibu Ikebukuro Line and the Tobu-Tojo Line will carry you to Saitama and Tokyo’s north.

■The platforms of the four companies serving Ikebukuro Station ↓■ 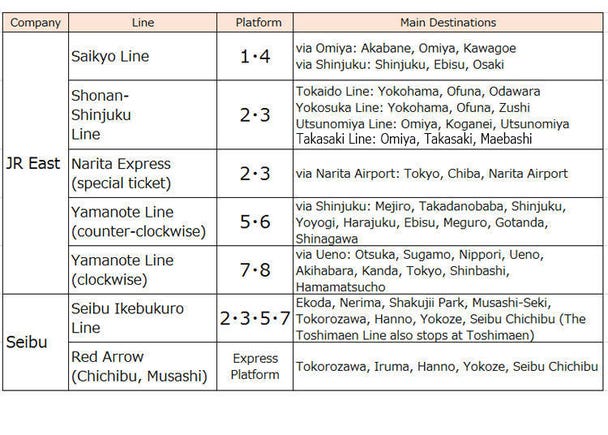 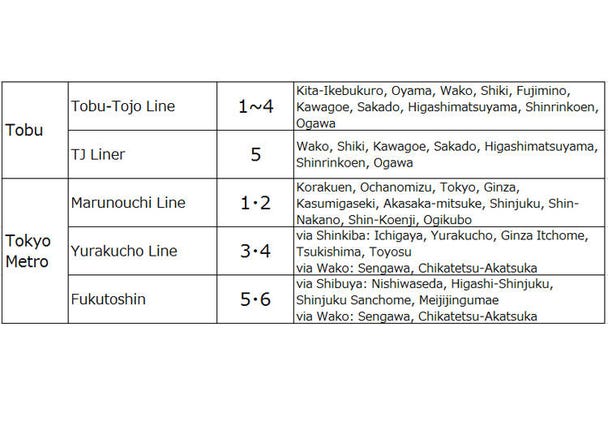 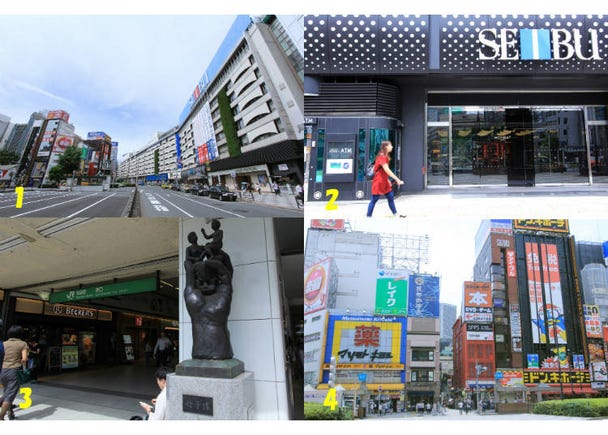 The Ikebukuro Station East Exit area is a busy place home to large electronic stores, restaurants, izakaya, and all sorts of other leisure and entertainment facilities. The street right in front of the station furthermore leads to Sunshine City, a massive complex that doesn’t only house numerous shops, but also an aquarium, an observatory, a theater, a hotel, restaurants, and more. 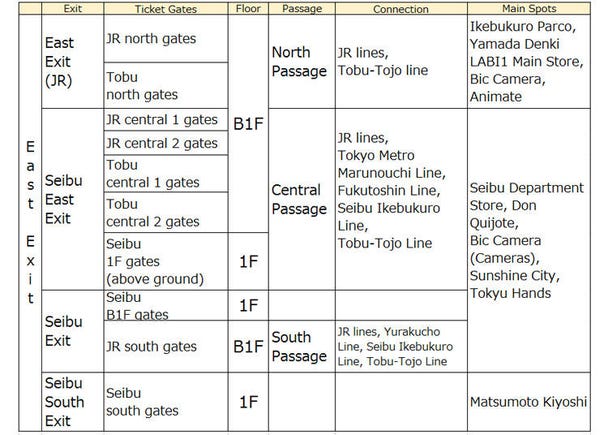 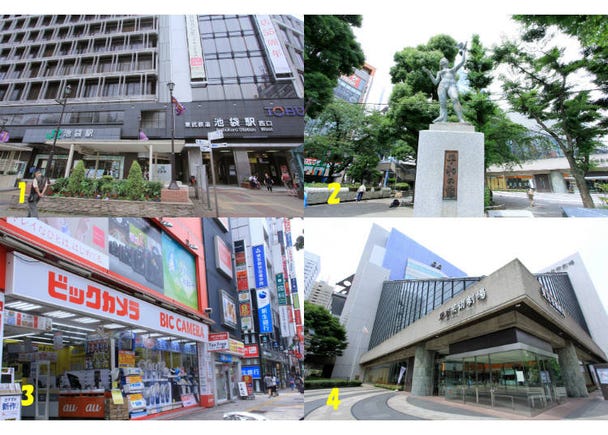 The atmosphere of Ikebukuro Station’s West Exit is entirely different from its south and north side. The south is quiet and calm, home to the Tokyo Metropolitan Theatre, a park, and the Rikyo University. The north, on the other hand, is called Ikebukuro Chinatown and boasts a large number of Chinese shops and restaurants with a fun and lively atmosphere. 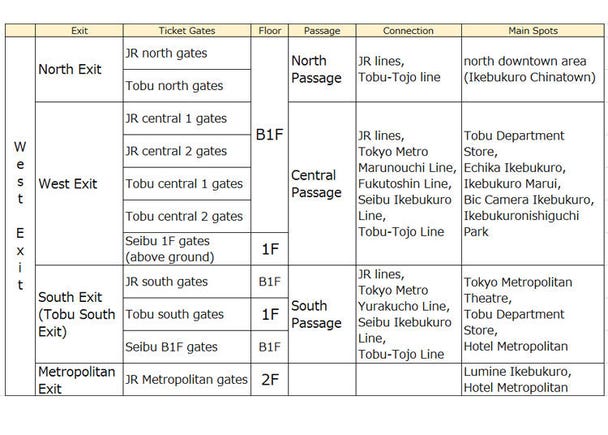 6) Exits and Directions of the Ikebukuro Station East Exit

■Towards East Exit
1: Pass JR’s north ticket gates (1), or exit via the Tobu north ticket gates, and turn right.
2: Continue through the North Passage (2) towards the east.
3: Pass by the Ikefukuro Statue that looks like an owl (3), and ascend the stairs.
4: Continue to the East Exit on the ground level (4). A statue called the Mother and Child serves as a point of orientation! 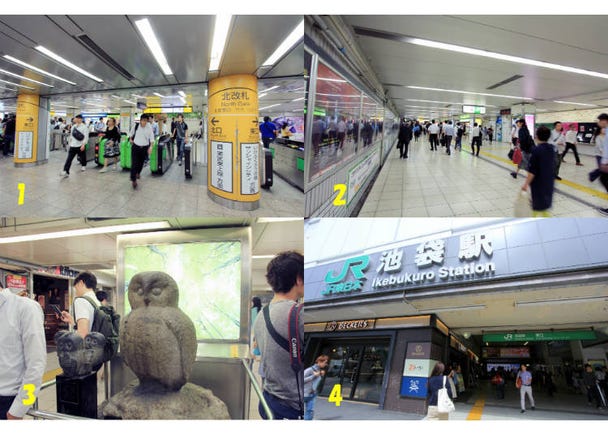 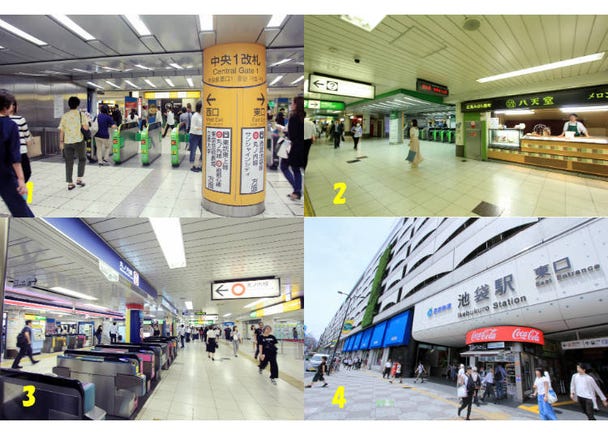 ■Towards Seibu Exit
1: Head left if you exit via the JR south ticket gates (1).
2: Follow the South Passage towards east. Pass the east ticket gates of the Yurakucho Line (2).
3: You will arrive at the Seibu Department Store. At its entrance along the South Passage, you can see the “Light Clock” (3).
4: If you go up the stairs without entering the department store, you’ll find yourself in front of the Seibu Exit (4).
※If you come from a Tobu line, exit via the south ticket gate, descend to the first basement level, and follow the South Passage towards east. Then go up the stairs again. 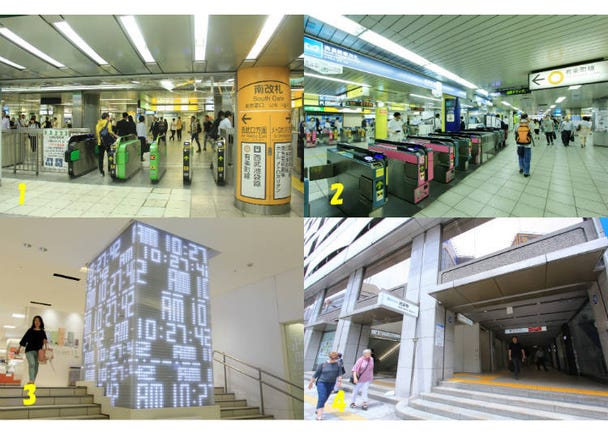 The exits on the west side of Ikebukuro Station are, from the north, the North Exit, the West Exit, the South Exit, and the Metropolitan Exit. 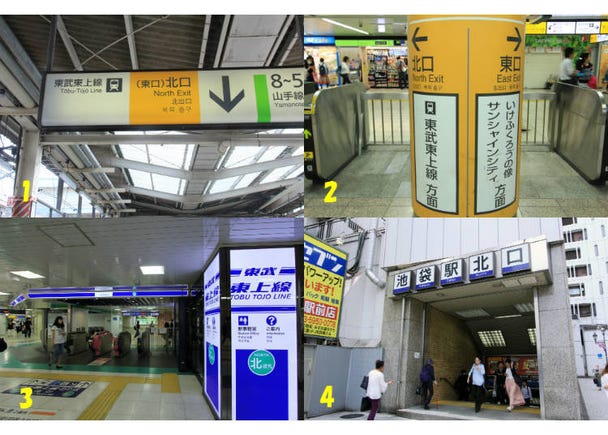 ■Towards West Exit
1: If you arrive via JR or Tobu lines, descend the stairs (1) on the respective platforms to the first basement level.
2: Turn left after passing through the central 1 ticket gate (1, depicts JR), or right if you pass through the central 2 ticket gate.
3: Follow the Central Passage westwards (in the direction of the Tobu Department Store; 3). Ascend the stairs in the center of the passage (Exit 19).
4: You’ll arrive at the West Entrance, the main entrance of that side of Ikebukuro Station. It is marked by a sign saying “Tobu Ikebukuro Station West Entrance” (4).
※If you arrive via Seibu lines, exit via the ticket gate on the first basement level and turn left to follow the Central passage westwards. Then ascend the stairs of Exit 19. 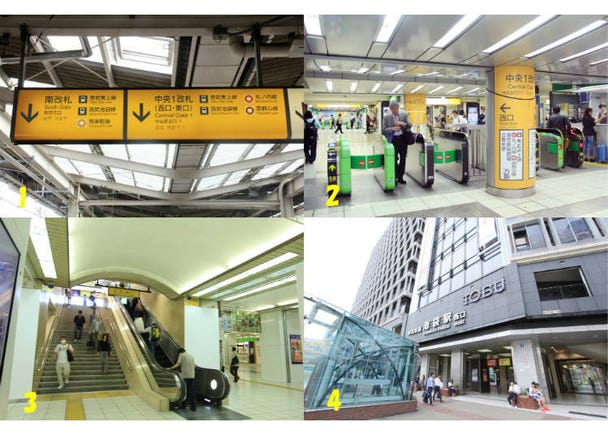 ■Towards South Exit
1: As for the JR lines, head down the stairs at the southern end of the platform, pass through the south ticket gate (1) and turn right.
2: Follow the South Passage westward. After passing the Yurakucho line’s ticket gates, you will arrive at the basement floor of the Metropolitan Plaza (1).
3: If you arrive with a Tobu line, pass the south ticket gate (3) at the southern end of the platforms and head right towards the South Exit (4).
※For the Seibu lines, exit via the B1 ticket gate, and follow the South Passage westward. 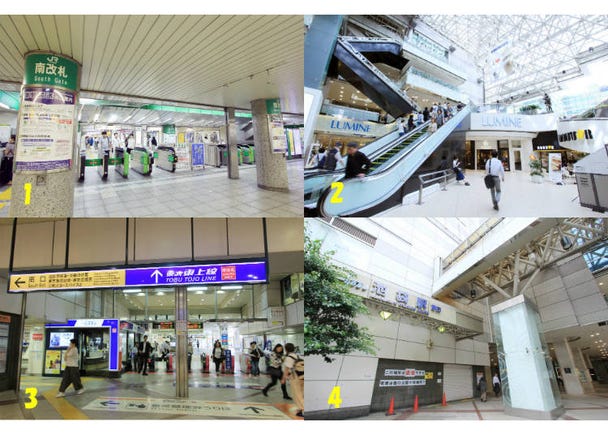 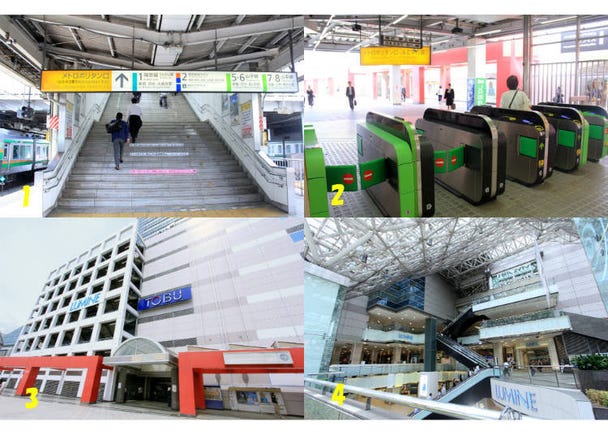 ↑1. Take the stairs at the southern end of the JR platform. 2. Leave via JR's Metropolitan ticket gate. 3. Lumine Ikebukuro in front of the ticket gate 4. Metropolitan Plaza

■To Kawagoe
Kawagoe is a city in the southwestern part of Saitama Prefecture and is known for its beautiful historic streets, warehouses, and shrines – for this reason, it boasts the nickname of “Little Edo.” This beautiful sightseeing spot can best be visited via the Tobu-Tojo Line from Ikebukuro station – the express train will get you to Kawagoe in 32 minutes and for a mere 470 yen. 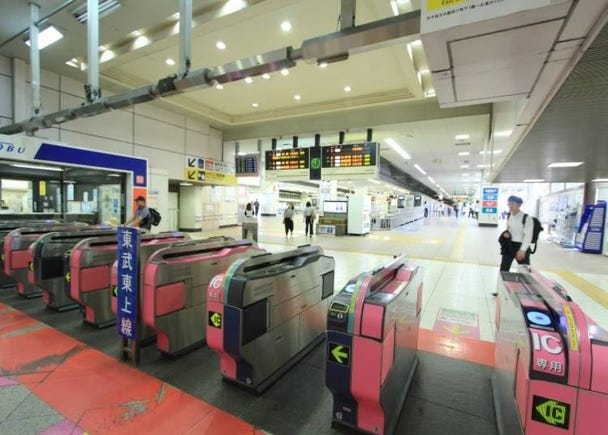 ↑The south ticket gate of the Tobu lines and the Tobu-Tojo platform. 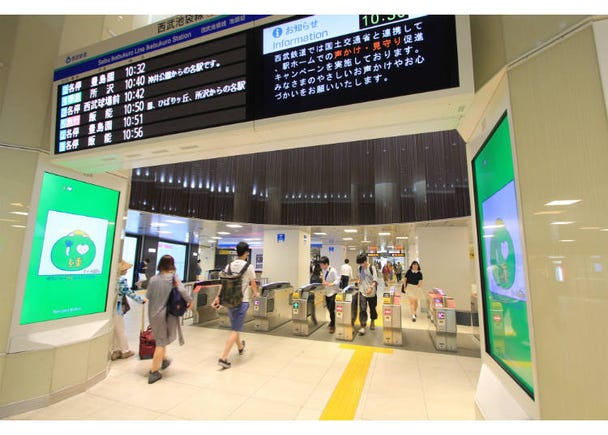 ↑The Seibu ticket gates on the ground floor

■To Iruma
Also located in Saitama, Iruma is famous for mainly two things: the Mitsui Outlet Park Iruma, a large factory outlet with around 210 shops, and Johnson Town, a little neighborhood that looks like 1950s America. With the Seibu Ikebukuro express train, it’ll take about 50 minutes and 440 yen to get to Iruma. (The Mitsui Outlet Park Iruma is another 15-minute bus ride via Seibu Bus away from Iruma Station.)
You can also use the Red Arrow express train from Ikebukuro Station. Board it via the special platform next to platform 7. We recommend entering through the ticket gates on the ground floor, close to Ikebukuro Station’s Seibu East Exit or Seibu Exit.

Tokyo Ikebukuro｜Ikebukuro Station Area Map & Sightseeing
Visiting Ikebukuro, Tokyo's Other Anime Town! 10 Quirky & Unique Spots You'll Want to Add to Your Tokyo Bucket List!
*This information is from the time of this article's publication.
*Prices and options mentioned are subject to change.
*Unless stated otherwise, all prices include tax.