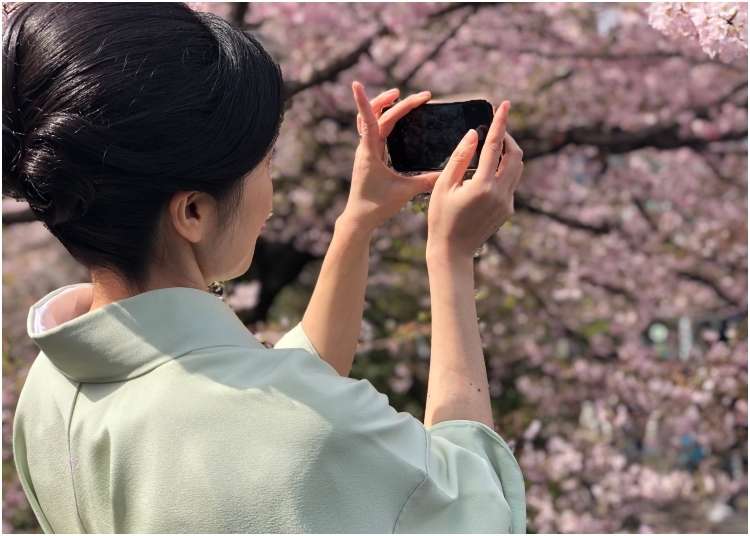 Tokyo's 2019 cherry blossom season officially kicked off on March 21! Follow along as we share how the bloom is progressing around Tokyo, plus give updates on when and where to see cherry blossoms in Japan.

When does the Tokyo cherry blossom festival season start? 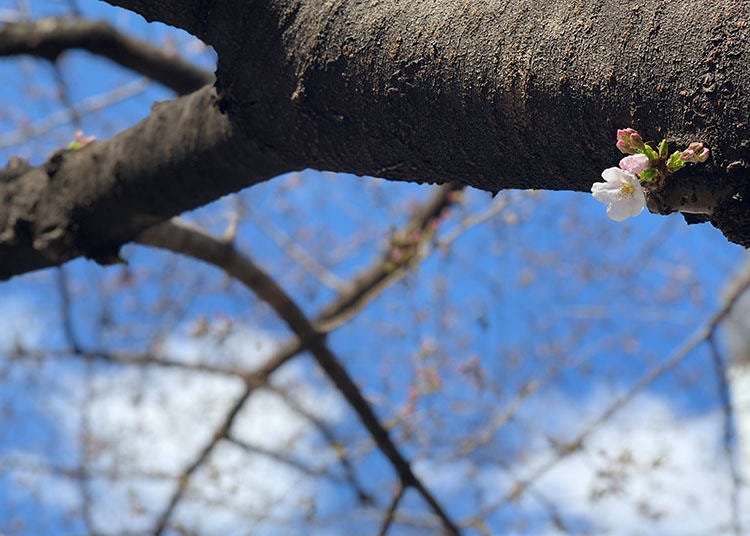 Tokyo's cherry blossom festival season officially starts around March 21! This is after an official from the Meteorological Agency confirmed that at least five blossoms had opened on a sample Somei Yoshino cherry tree at Tokyo's Yasukuni Shrine - the standard for determining when Tokyo's blossom season starts.

After this, blossoms are expected to continue opening around the greater Tokyo area, with peak bloom in about seven days later. 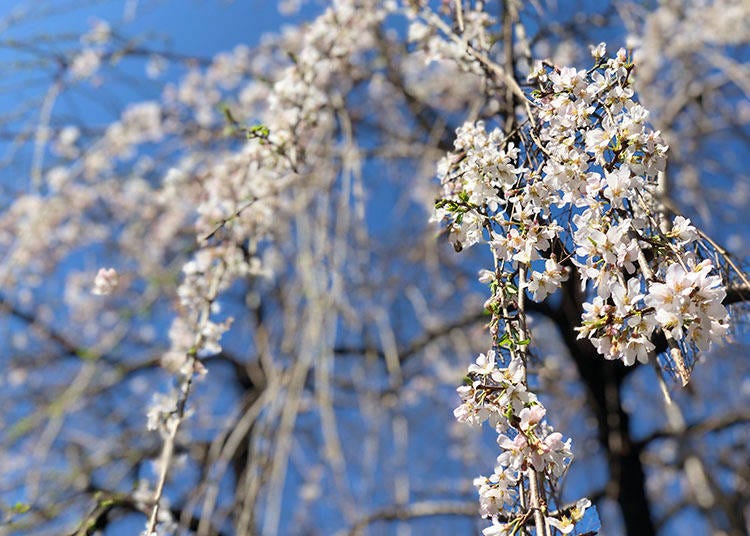 In other areas around Tokyo, budding blossoms could be seen in several neighborhoods, including in Nihonbashi, Asakusa, and Shibuya. 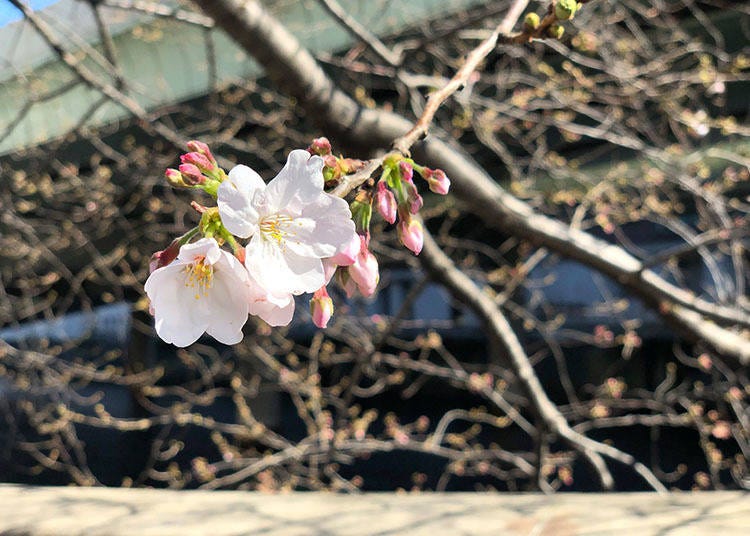 Live Japan will be bringing you updates from some of Tokyo's most popular cherry blossom areas as well as showing off some of the other trees in bloom. 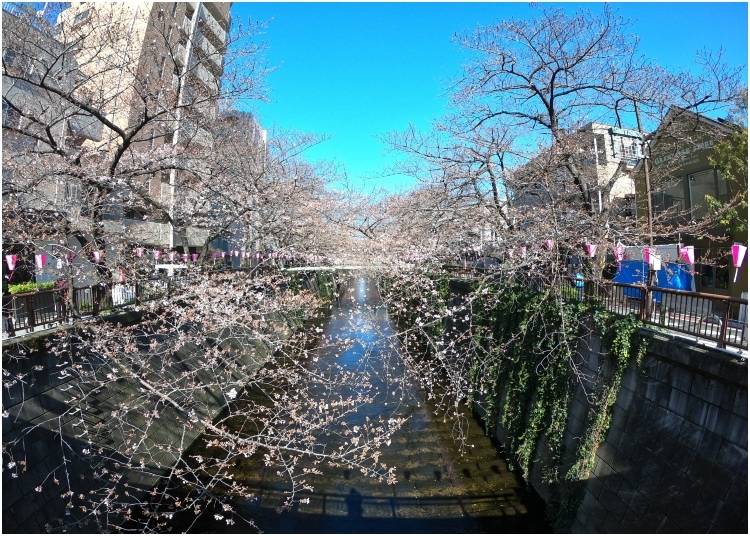 Just three days after the Tokyo cherry blossom festival season officially started, trees around the city have been speckled with pink buds. The Meguro River is very famous for its sakura, particularly at night when they are illuminated. At this time, crowds converge to snap photos and stroll beside the river, picking up a drink or some light snacks at stalls set up along the streets. This is such a fun way to celebrate the cherry blossom festival in Japan! 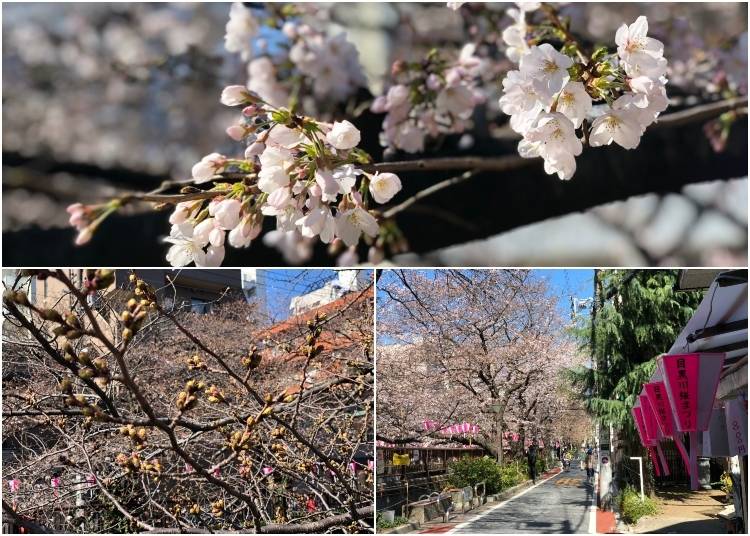 As of March 24, while some trees are already decorated in pale pink blossoms, many of the buds are still waiting to open.

Just two days later, however, the scene was completely changed! Check out the video below.

2. Yoyogi Park: Open area to celebrate your own cherry blossom festivals in Japan! 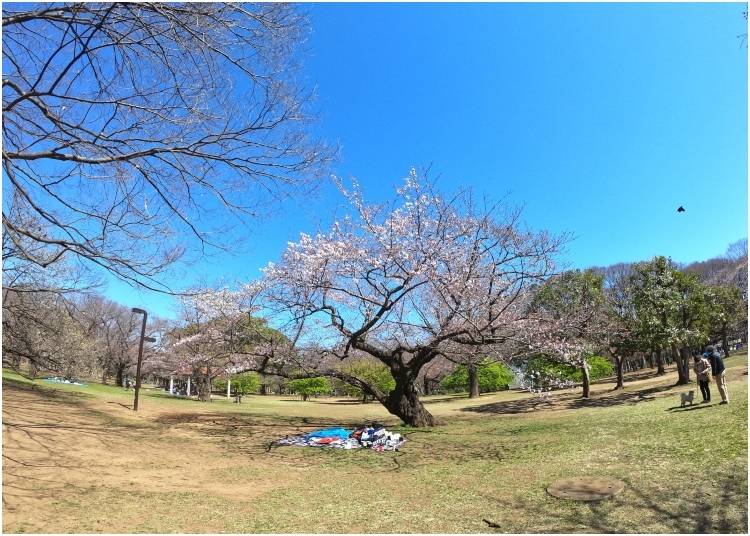 As with Nakameguro, the blossoms in Yoyogi Park are still on their way to opening. Clear blue skies and cool air created an inviting space for hanami flower viewing picnics and shutterbugs. And the perfect spot to spread out a goundcloth and celebrate your very own Tokyo cherry blossom festival! 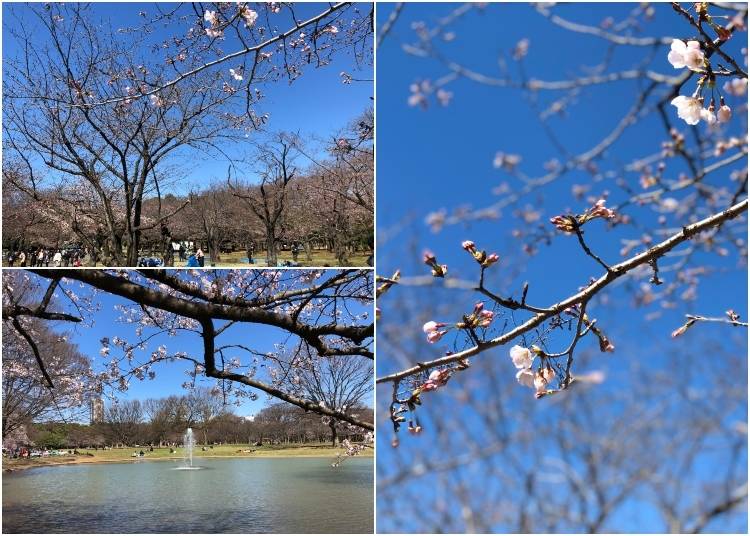 People congregated underneath the trees partially in bloom, merilly chatting away while enjoying cans of beer and chuhai. Although the real crowds have yet to descend on the park, this will undoubtedly change over the coming week! 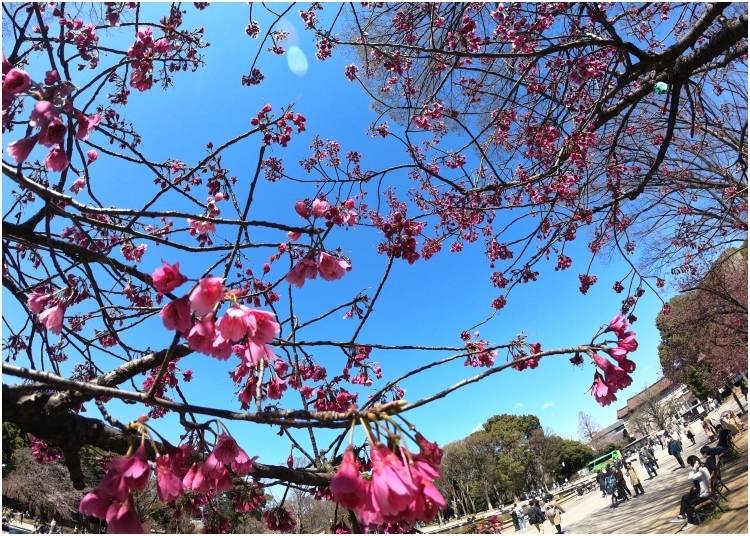 Ueno Park is an extremely popular destination for its cherry blossom festival in Tokyo. Despite only a few trees in bloom, while the majority are still budding, crowds of people circled around the area. 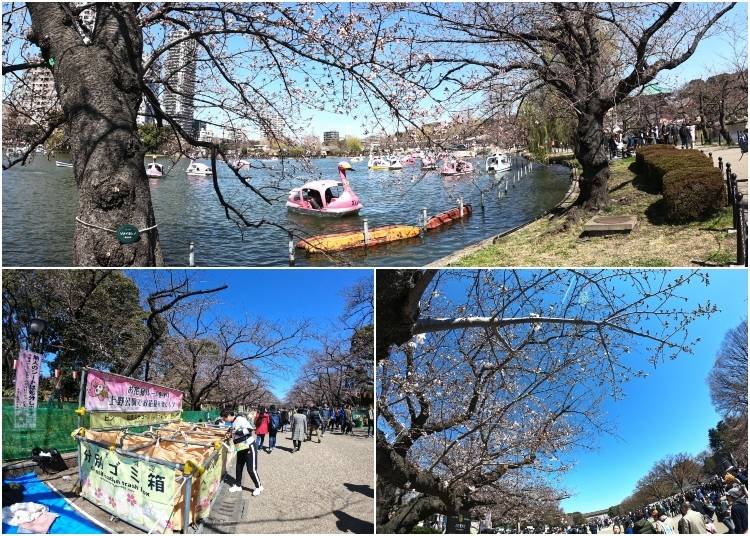 Many more were crowded along the park's main avenue: groups of friends relaxing on blue tarps and enjoying a picnic underneath the buds and blossoms. As is common on weekends, street performers playing drums, accordions and other instruments beckoned onlookers. 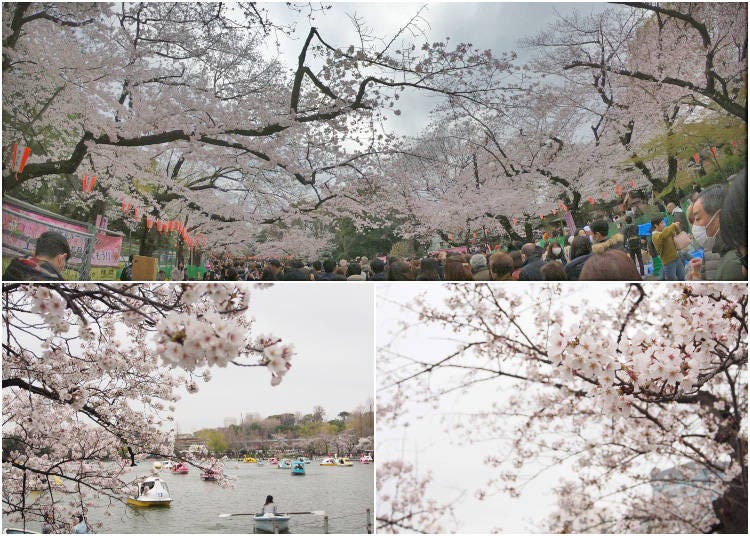 As the bloom progressed, blossoms began opening around the Shinobazu Pond area as well, treating all to a magnificent view. 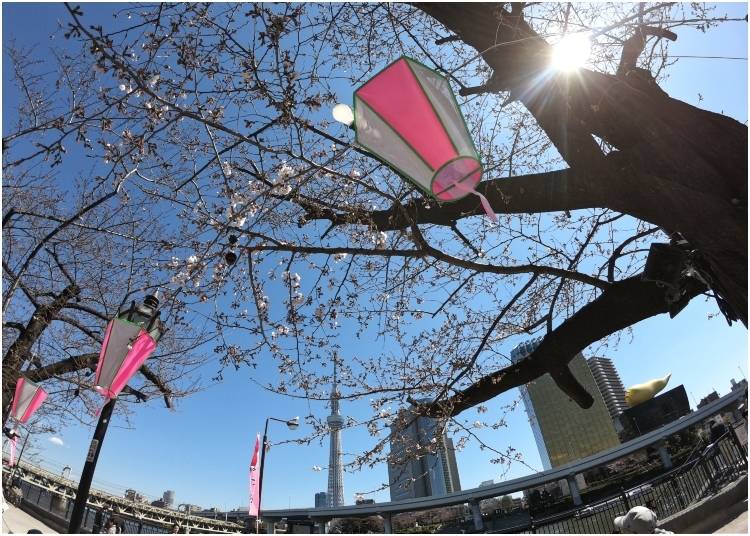 One of Tokyo's popular old neighborhoods and home to the city's oldest temple, Asakusa is also famous for its cherry blossoms. While cherry trees grow in several areas around Asakusa, the area beside the Sumida River is particularly popular in this season. This area is called Sumida Park, located in Taito Ward. 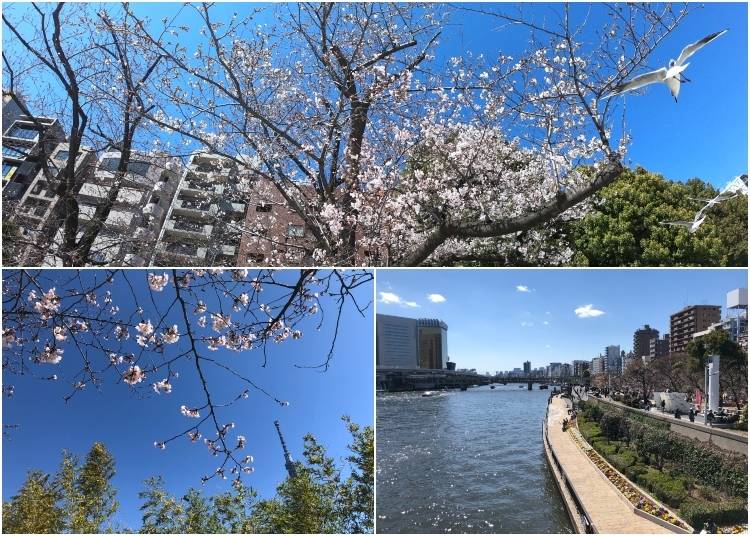 Although the cherry trees are budding, most have not really begun to open in bloom. This didn't dissuade crowds of visitors from enjoying a relaxing stroll on a beautiful spring day, in search of the perfect sakura snapshot! 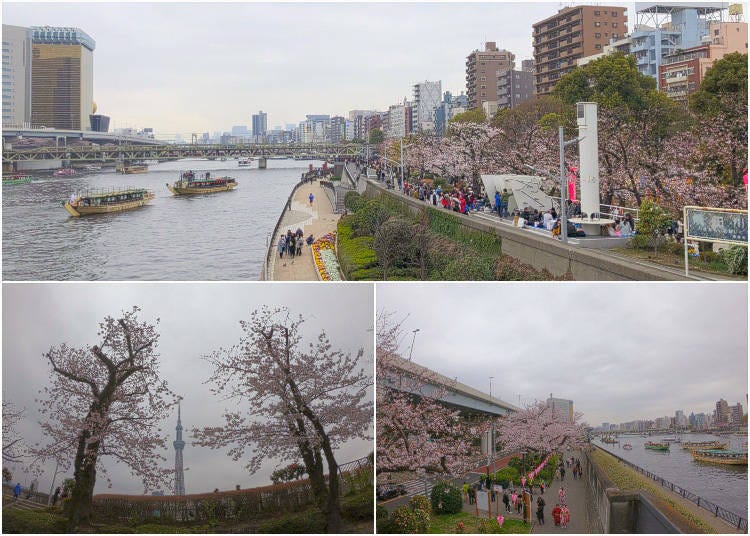 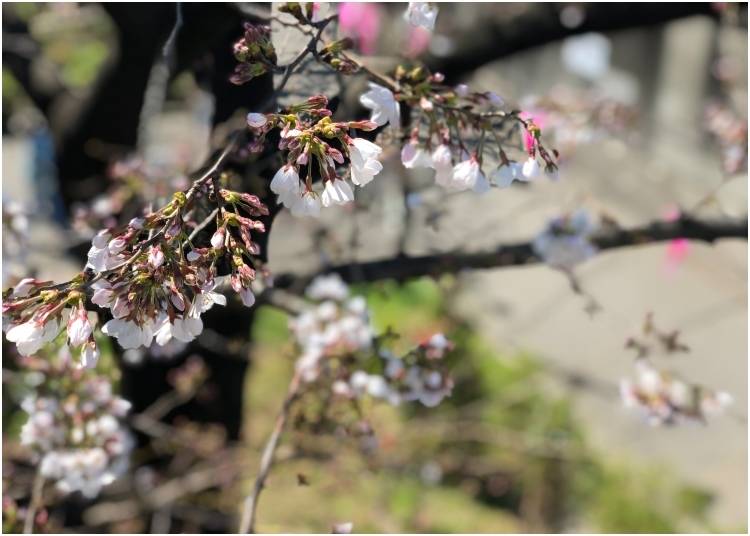 Across the Sumida River from Asakusa is a continuation of Sumida Park - this one in Sumida Ward. Here the blossoms along the river are also still budding but not quite in bloom, but they do make for very pretty scenery nevertheless and will be opening up over the next few days. 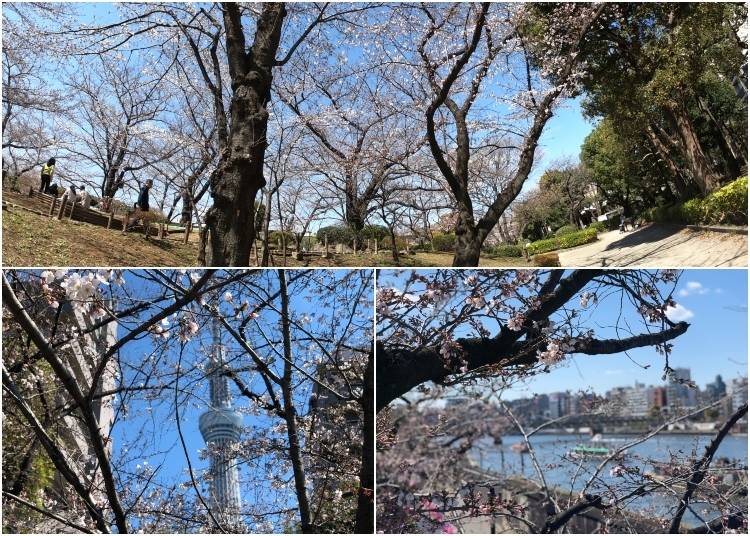 A sizable portion of Sumida Park (Sumida Ward) is under construction. However this hadn't dissuaded people from setting picnic sheets down under the cherry trees. Cherry blossoms here are still a few days from opening in earnest as well. Generally this park is much quieter than other blossom areas, given it is a 15 minute walk from Asakusa Station. It nevertheless offers a space for picturesque photos! 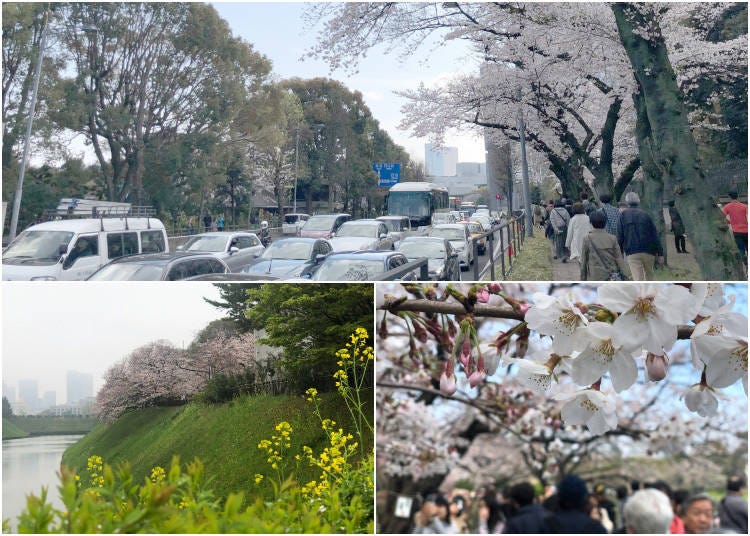 Chidorigafuchi Park is another of Tokyo's most famous spots for cherry blossoms. When we visited on March 31 (10 days after first bloom; 4 days after peak bloom) many of the flowers were still open, but with green leaves growing through. Still, its gorgeous blossom canopies still brought crowds of shutterbugs and people looking to enjoy a picnic under the sakura petals. 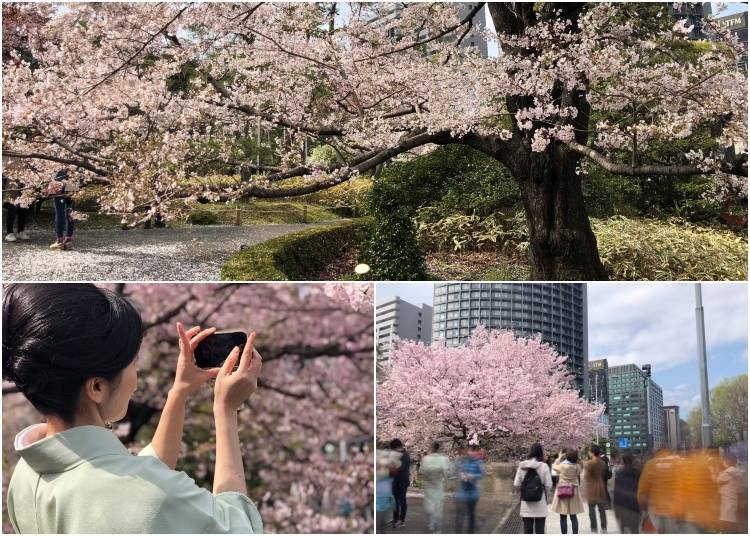 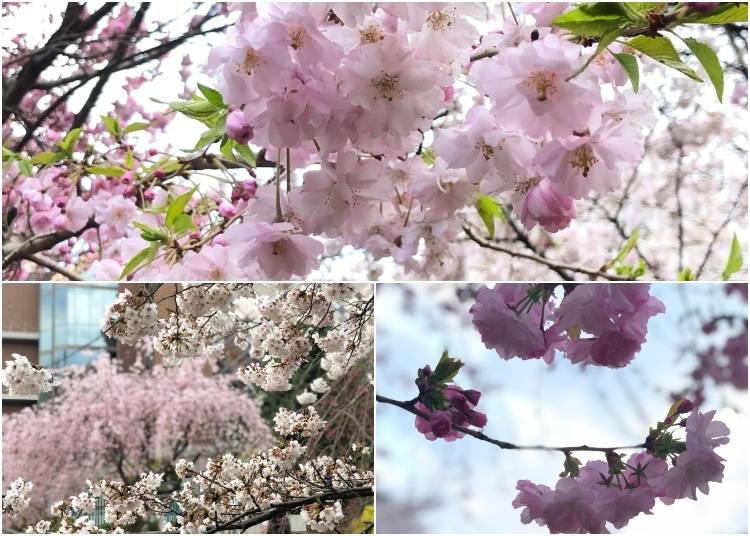 Weeping cherry blossoms and yaezakura at Hamacho Park in Ningyocho on March 31, 2019

March 31, 2019 (10 days after first bloom; 4 days after peak bloom): As the Somei Yoshino blossom variety begins to fade, other varieties, such as the pom-pom-shaped yaezakura, are coming into bloom around the area. If you are flying in to Tokyo soon, don't worry: you can still find plenty of spots still in bloom!