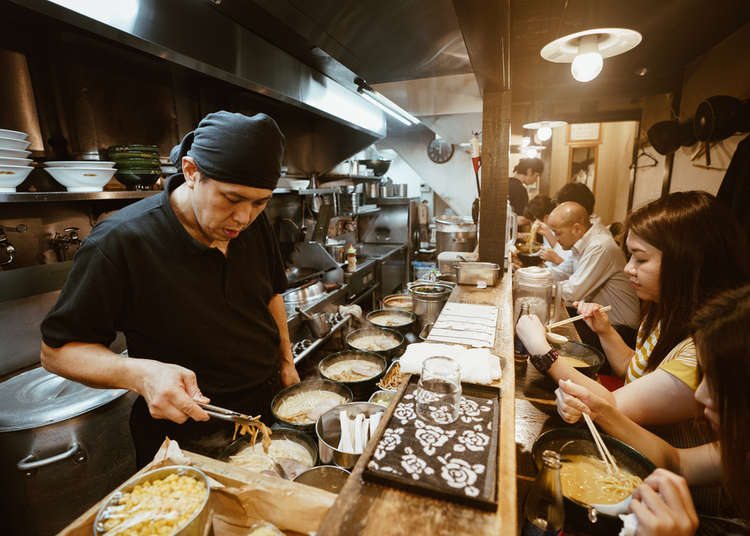 8 Weird Mistakes Tourists Make When Eating Out in Japan

Since Japan is home to some of the richest, tastiest, most unique dishes in the world, eating out over here can be an amazing experience.

Japan’s restaurants come with their own set of rules and customs that you won’t find in any other country, from removing your shoes to understanding what otoshi is, so it can be very easy for tourists to make a few mistakes.

In this guide, we’re going to look at 8 common mistakes tourists make when eating out in Japan. 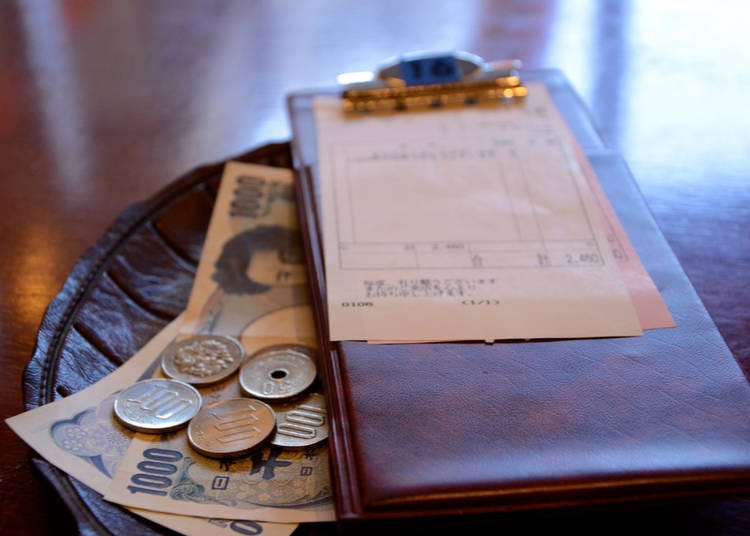 “Tipping culture over here is unlike anywhere else. Basically, we don’t tip. I work in a restaurant and a lot of tourists add a gratuity whenever they pay in cash, but most of the time we refuse any extra money. If we can, we give the money back, but if the customer has left then we put the money in the register. We don’t keep it for ourselves. There are some exceptions out there, but for the most part it’s the same all over Japan.”
- Lin, Tokyo.

This one goes for a lot of services in Japan, not just eating out, but it’s most common in restaurants and bars. Leaving a tip for a waitress or bartender isn’t necessary because Japanese culture emphasizes hard work, respect and fairness, so giving them additional money can sometimes make things a little awkward! It may come across as rude since you’re implying that the service workers don’t make a fair wage. Most tips are politely refused, but some workers might grin and accept the tip to avoid embarrassment.

In some restaurants, a service charge might be added to your bill, somewhere around 10-15 percent of the total value. This is the closest thing you’ll find to tipping Japanese service workers. If there isn’t a service charge, then it’s advised to still not add a gratuity. 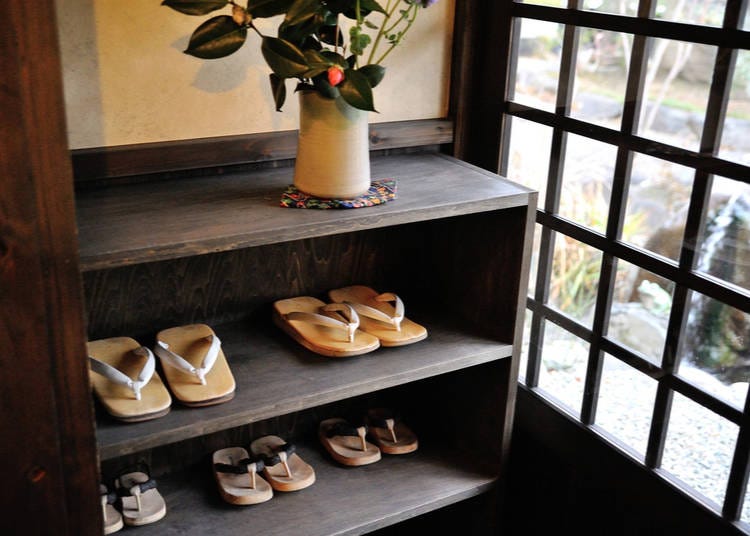 "Different izakayas will have different footwear rules. Some will let you keep your shoes on, but most will expect you to remove them at the door and store them in a locker. Be careful not to just walk straight in without checking the rules first!"
- Harry, Osaka

Izakayas are hotspots for Japanese workers to have a few drinks and food after a long day at the office. While they're officially labelled as taverns, the variety of food available at most izakayas rivals most restaurants.

As izakayas have a longstanding traditional history, most of them impose traditional footwear rules. In some izakayas, you’ll have to take your shoes off before you enter the building (common in the traditional family izakayas and not the chain taverns), in others you’ll be asked to remove them in the entranceway.

In the more traditional pubs, the staff will take your shoes and put them in a storage locker for you pick up when you exit. In more casual izakayas, you might be prompted to put them in a locker yourself (don’t forget to take the key!). 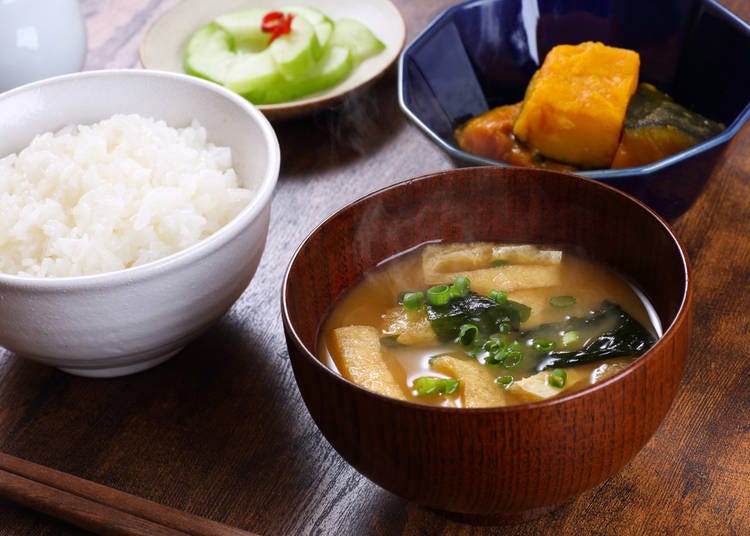 “When eating in groups, don’t expect everyone’s dish to come out at the same time. On our first night in Tokyo, me and my wife went to a traditional Japanese restaurant somewhere in the backstreets of Shibuya. She ordered a noodle dish and I had chicken and rice. Her food came out first, then we both sat waiting around for mine to come out. ‘It can’t be long now,’ we kept saying, but ten minutes passed and I still had nothing. I thought they might have forgotten about me so I asked the waiter. Unfortunately the language barrier prevented me from getting a proper answer, but another patron in the restaurant told me that it’s normal for dishes to come out 10-20 minutes apart.”
- Simon, Canada

This one can be quite confusing. In fact, I had the exact same problem myself the first time I ate out in Japan. After years of dining out in the UK, it’s rooted in me that everyone’s dish should arrive at the same time.

But in Japanese restaurants, you’ll get your food the second it’s cooked. That means if someone’s ordered a light dish, or something which can be cooked quickly, that person will get theirs first. Meanwhile, you might be sitting around twiddling your thumbs and waiting for your garlic chicken or your tempura. But don’t worry, the chef or the waitress hasn’t forgotten you.

If you’re in a large group, it’s quite common for people to finish their meals before others have even started. You might feel a little rude doing so, but this cook-and-serve immediately approach ensures that cooked dishes aren’t left over artificial heat, which can over-cook food and reduce nutrients. It means you’re getting the freshest possible food every time.

4. Don’t expect otoshi to be free! 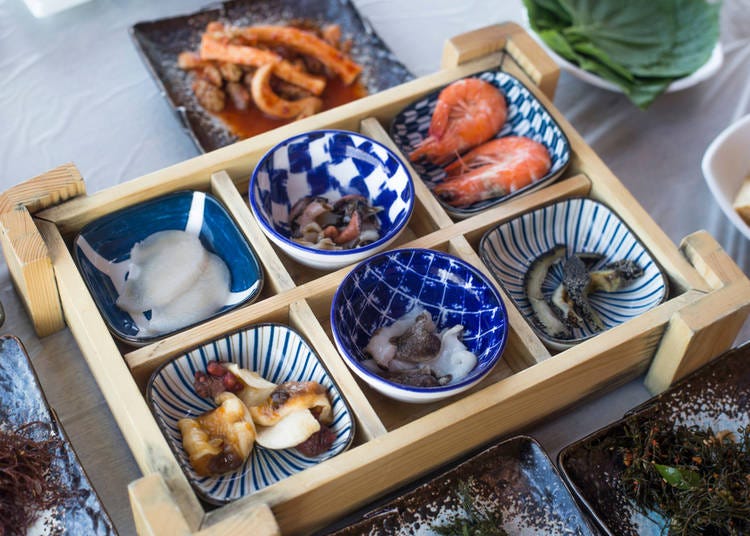 “Otoshi will be added to your bill whenever you order alcohol. These are little snacks you can munch while you wait for your food to arrive at your table. They’re not free, but they’re not expensive either.”
- Bryan, Australia

In true Japanese style, for every problem, there’s a solution. When it comes to the above problem of food arriving at different times, this problem is addressed with otoshi, which is a table or seating charge, but comes in the form of an appetizer.

Otoshi, also known as tsukidashi (literally meaning ‘pushed out’) in Western Kansai, are small nibbles which are placed on your table as soon as any of your party orders alcohol in an izakaya (sometimes with soft drinks too, but not often). You might think these nibbles are a gesture of good faith, but you’ll actually be charged somewhere between 400-700 yen (around $3-$6) for the privilege.

Why? Well, it comes back to Japanese traditions. The Japanese believe it customary to enjoy food and drink together, and with the waiting time between dishes arriving, otoshi allows you to enjoy food along with your drinks.

The custom of otoshi has a number of advantages. If you’re absolutely ravenous by the time you arrive at the izakaya, you can start eating immediately. It also gives you something to chomp on if your food is the last to arrive.

But the best part? You never quite know what you’re getting with the appetizer. Some typical otoshi dishes include steamed meat or vegetables, pickled cucumber, traditional salads, grilled fish pieces, and noodles. And for what you get, 400-700 yen is a small price to pay for such a delicious opener. 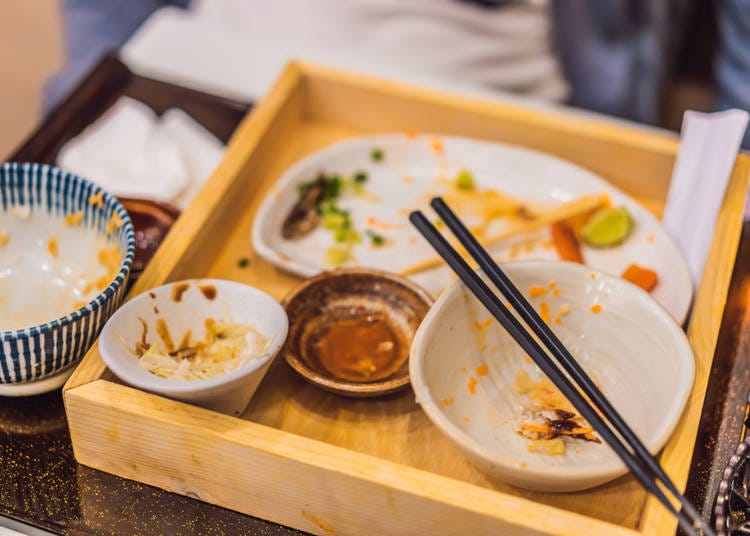 "Finishing what you eat is a big deal over here. I see a lot of tourists order large portions and leave leftovers. But then they'll go on to order dessert or extra food."
- Erika, Tokyo

In some countries, restaurants might be happy for you to order more than you can handle, but it's a big mistake to do that in Japanese restaurants.

The Japanese consider it rude to leave food on your plate, and even more so to order more food when you haven't finished everything you've already got. This is related to one of the fundamental concepts in Japanese culture, mottainai, which is a feeling of regret at having wasted something.

This is one of the reasons why Japanese food portions are quite small, so as not to risk overloading you and leading to waste. Of course, there might be genuine reasons why you can’t finish everything on a plate, such as allergies, but in this case simply tell your waitress beforehand.

6. Prepare for a surprise with fast food! 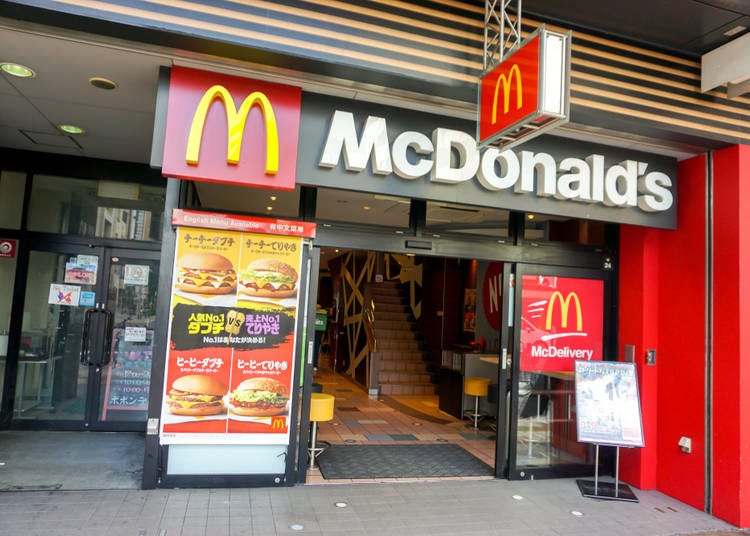 “Don’t expect American-style portions from places like McDonald’s in Japan. Over there, a large drink from McDonald’s is smaller than a medium one in most other countries. But with that said, Japanese fast food places get a lot more specialty items.”
- Geert, Netherlands

If you’re starving and you need something right now, or you’re looking for a cheap meal out, one of the many fast food stores in Japan will gladly provide.

As Geert says, portion sizes over here are a little on the smaller side, which comes back to the concept of mottainai again. But what Japan lacks in size it more than makes up for in creativity.

For example, McDonalds’s has a lot of Japanese-only items on their menu, including teriyaki burgers, chocolate fries, cheesecake McFlurries, and even a shrimp fillet burger.

7. Buffets and tabehoudai are totally different 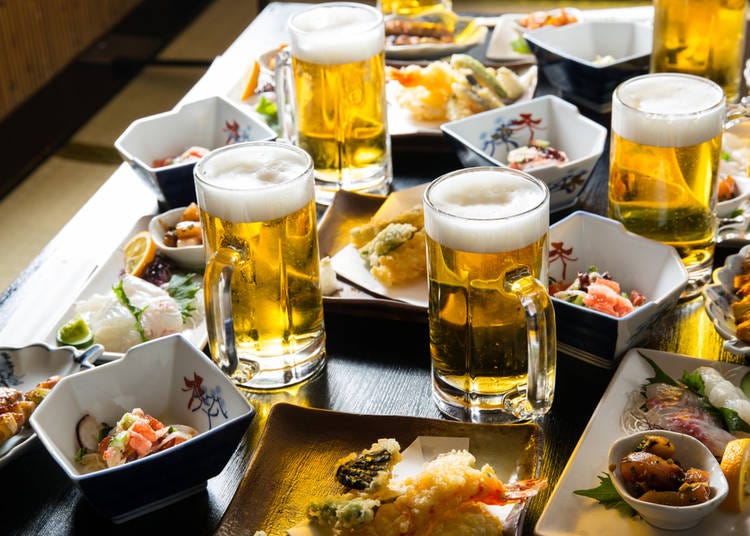 “The first time I came to Japan I had no idea what tabehoudai was, and when someone described it, it sounded like a buffet, which I usually avoid at home. When I tried it though, it's more like just paying a set price and ordering as much as you want! Amazing! I love it with a nomihoudai (all-you-can-drink) too!
- Cassandra, Tokyo

For those with big appetites, you’ll find that the many tabehoudais (‘eat as much as you can’) around Japan will see you right. Unlike traditional buffets, a tabehoudai gives you a set amount of time to stuff yourself, usually around 90-120 minutes. Most tabehoudais serve a particular type of food, from salad, meat, sushi and international cuisines. Depending on the restaurant in question, you’ll either serve yourself or order food to your table.

Interestingly, quite a few regular restaurants around Japan offer all-you-can-eat options in addition to regular dining, so try asking ‘tabehoudai ga arimasu ka?’ if you’re feeling particularly hungry. In some places, they’ll even give you a mini-barbecue to roast your own meat!

8. Don't eat and walk at the same time 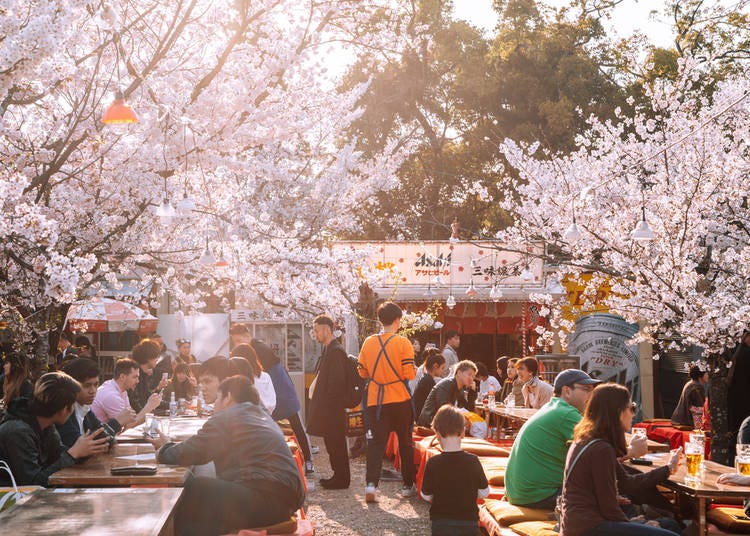 “So you’ve just picked up some fast food before you headed home, where are you going to eat it? The best place would be inside the store, because walking around and eating is considered rude in most parts of Japan. There are a few exceptions, but as a general rule, try to eat your food in the same place you ordered it!”
- Joe, United Kingdom

Eating and drinking in public, including on public transport, is heavily frowned upon. This is particularly true for places of worship like shrines or temples, so avoid eating or drinking around them at all costs. One of the main reasons for this is Japan prides itself on having some of the cleanest streets in the world, and encouraging outdoor eating might leave a lot more trash.

The exceptions to this rule are public benches in quiet spots, near large groups of vending machines and in some parks. Of course, during food festivals and on tables at yatai stalls are also permissible.

Now you’ve read this guide, you’ll know exactly how to conduct yourself in a restaurant in Japan. Of course, don’t be worried about making a few mistakes along the way – it happens to all of us! The Japanese people understand that tourists won’t be familiar with their customs, so don’t feel bad if you overlook a few things.