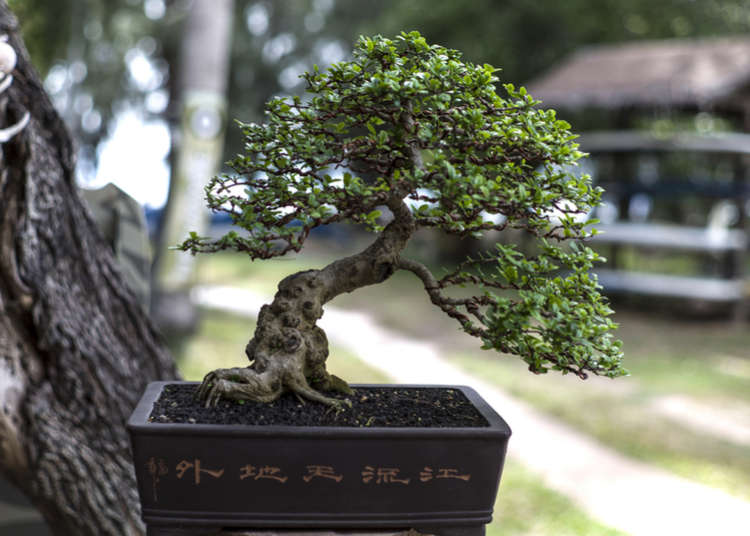 Culture of Japanese Bonsai: The Beauty and Mystique of Miniature Trees

Have you ever wondered what a Bonsai tree actually is? Probably your first answer would be that it is a small tree – yet it is so much more than that! A rather telling point is that you can’t plant them in your garden, and they require a lot of attention. They are in truth a form of art as every Bonsai tree is carefully cared for in order to achieve a desired image.

What are bonsai trees?

A lot of people became aware of Bonsai trees because of the Karate Kid, that is the sequence of movies that were released in the 1980s rather than the more recent 2010 reboot version, and in these movies there was a strong visual connection with inner peace.

However, you don’t have to be a martial arts master to appreciate Bonsai!

The word Bonsai (盆栽) literally means "tray planting," and it finds its origins in China over 1,300 years ago along with the concept of creating miniature plants, landscapes, etc. From 1,000 to 800 years ago the Japanese version of Bonsai took root in Japan.

You may wonder what it is about Bonsai trees that has caused people over hundreds of years to devote their time to them, this is a hard question to answer as there are many reasons, but one simple explanation is simply that they are beautiful. It takes a lot of time and effort to shape a Bonsai tree into an individual’s desired shape, so when you see a beautiful Bonsai tree you have to keep in mind the countless hours of work that it took to create it – just like art.

The Long History of Bonsai in Japan 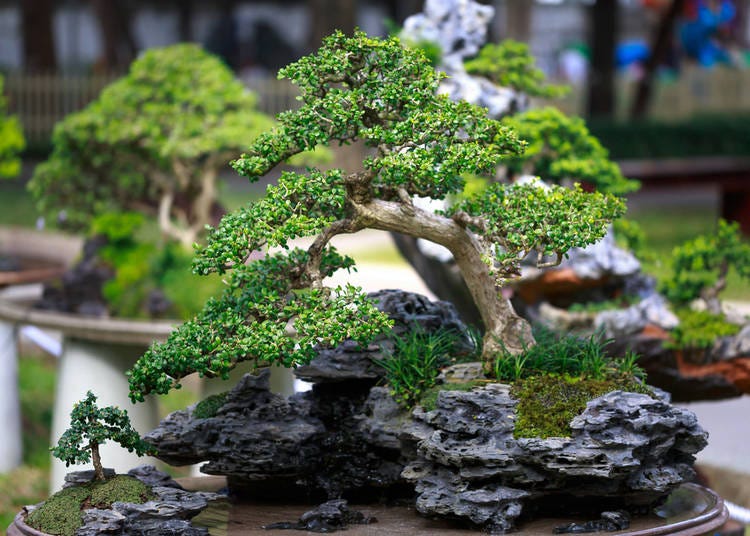 The basic concept behind Bonsai trees is derived from Chinese Penjing, an ideal of creating miniature versions of landscapes which itself is thought to be nearly two thousand years old. It is believed that the branches of this art form had reached Japan by the 7th and 8th centuries, and by the 13th century it is possible to see Bonsai in paintings. Kokan Shiren, a celebrated Buddhist and poet, (1278–1346) wrote an essay called Bonseki no Fu (Tribute to Bonseki) which described the aesthetic principles for art forms such as Bonsai. Around this time there was also a popular folktale about a samurai who burned three Bonsai trees in order to provide warmth for a monk on a cold night, however in reality the monk was an official in disguise, and he subsequently rewards the samurai. This story is popularly represented in woodblock prints and Noh theatre plays.

An Old Bonsai Personally Looked after by a Shogun 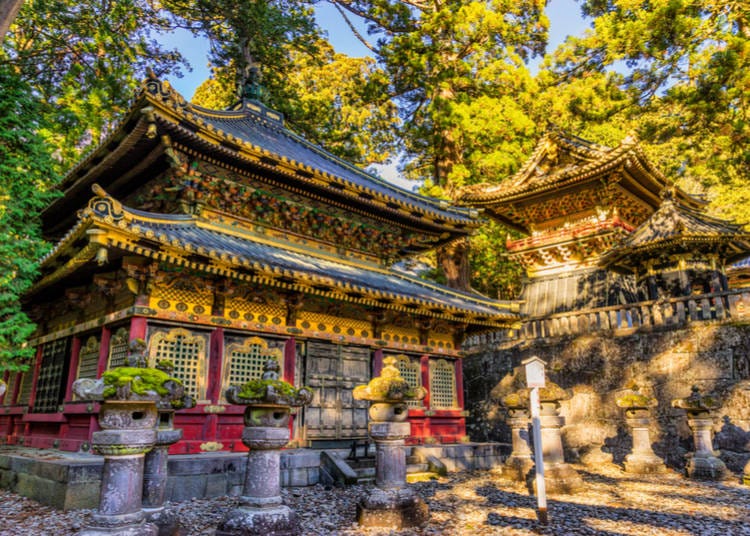 In Japan one of the oldest, and most famous, Bonsai Trees is the 500 year old ‘Sandai Shogun no Matsu’, which has been designated as a National Treasure. In Japan a National Treasure must show either outstanding workmanship, or a high value for world cultural history, or an exceptional value for scholarship. It has been documented that this Bonsai tree was personally cared for by the Third Tokugawa Shogun, Iemitsu, who is probably most well-known for closing the borders of Japan in the 17th century.

There are a number of other famous Bonsai trees, some which are reportedly 800 to 1000 years old, examples of which can be found at the Omiya Bonsai Art Museum in Saitama, near Tokyo. A really famous example is the 400 year old Japanese White Pine Bonsai tree which survived the nuclear bombing of Hiroshima, it had only been two miles from where the bomb exploded but was luckily protected by a wall.

[MOVIE] Character, Harmony, and Elegance: The Art of Bonsai 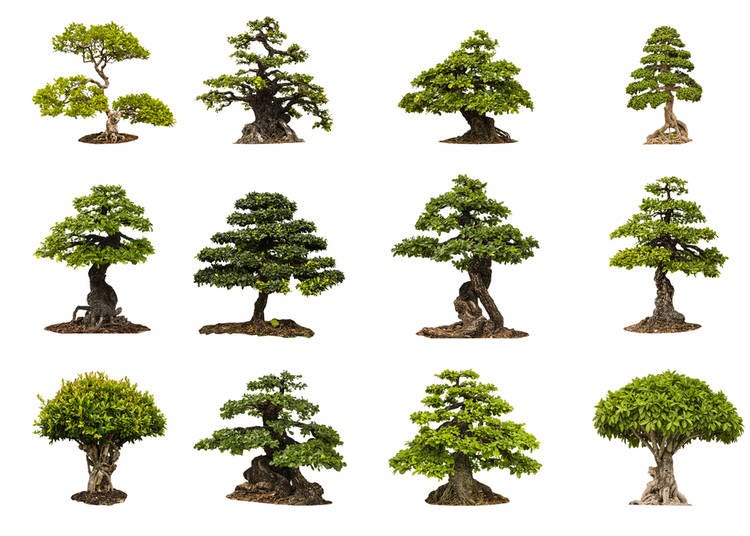 It is difficult to go into detail about what actually makes a Bonsai tree a Bonsai tree, obviously not every small potted plant is a Bonsai – a simplified explanation would be that a Bonsai tree looks like a normal tree, but in a miniature form. There are different styles of Bonsai tree which define what the finished Bonsai looks like, but in general the idea is that it is miniaturized, and that there are no obvious indications that the Bonsai’s creator has shaped it.

In addition, a Bonsai tree should be shaped in accordance with a number of set designs, for example, the Formal Upright style which means that the Bonsai tree is in agreement with the basic concept of a tree; trunk points upwards with thick broad branches at the bottom, and smaller thinner branches at the top.

Other styles include Informal Upright, which is similar but incorporates more natural looking curves in the trunk, Slant-style, where the tree leans in one direction and Cascade-style where the tree grows downward and reaches beyond the bottom of the pot. Other designs make use of roots growing over rocks, Bonsai being planted together and even one style, Windswept, makes the Bonsai tree appear as if it is has been shaped by a strong wind. 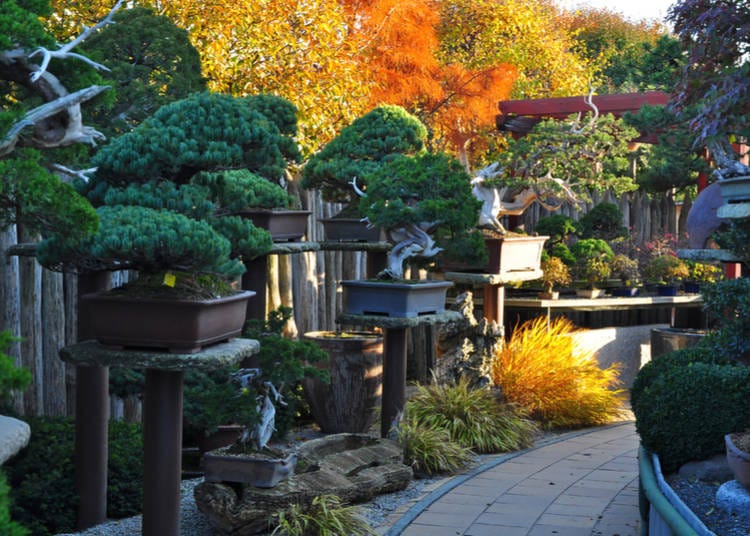 You don’t have to go very far to see a Bonsai tree in Japan, in more suburban or rural areas you can often see them outside of older homes, and in the Tokyo area you have the Omiya Bonsai Art Museum in Saitama as well as Shunkaen Bonsai Museum in the East of Tokyo. Even in Ginza you can see Bonsai trees at a shop called Morimae Ginza!

If that is not enough there are also frequent exhibitions throughout the year, such as the Japanese Suiseki exhibition held in June at Meiji Shrine in Tokyo and Kokufu-ten held in Kyoto every February.

While a Bonsai tree just looks like a small tree, it really is a type of art, and the Bonsai masters who care for these trees are no different to a painter or a sculptor. The beautiful trees they create are the culmination of extensive time and effort. In movies like the Karate Kid we can see their connection with inner peace, while in the oldest living specimens we are reminded of history and the generations of hands that have touched them. No matter how you look at it, Bonsai trees are very special and are really deserving of our appreciation.

[Video] Experiencing the Art of Bonsai in Japan
*This information is from the time of this article's publication.
*Prices and options mentioned are subject to change.
*Unless stated otherwise, all prices include tax.