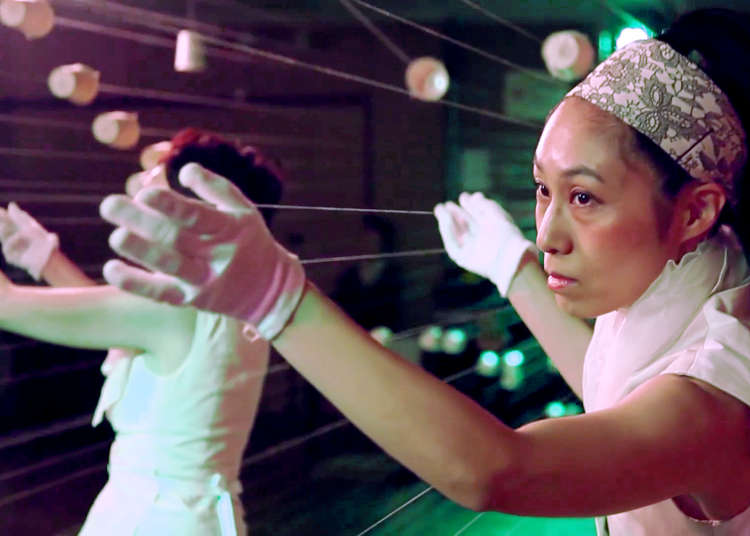 Stringraphy at Studio EVE: A Striking and Unique Musical Experience

Have you ever imagined being right inside a musical instrument, surrounded by song? I visited Studio EVE in Tokyo’s Daitabashi neighborhood and was able to experience this very feeling by attending a Stringraphy workshop. A beautiful melting of music, art, and movement, Stringraphy is an original concept that while born in Japan, has already made waves across the globe in its 25 years of existence. During the workshop, I had the chance to meet the members of the world-renowned Stringraphy Ensemble, enjoy a performance, and even try my hand at making my own string music. 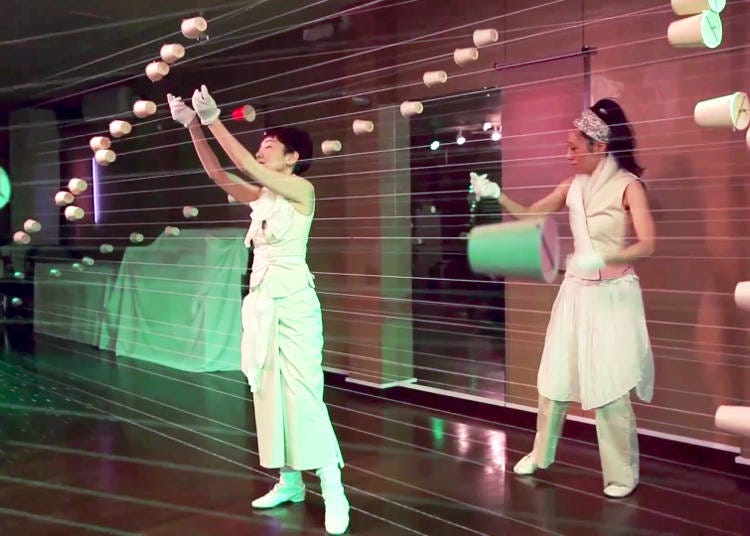 The word itself is a combination of “strings” and “graphics,” but, simply put, Stringraphy is a unique, modern Japanese musical instrument. However, to end its description there would be severely lacking. Stringraphy can be called a sound installation, in which an entire area is transformed into an acoustic harp-like instrument using paper cups and strings. The musicians, whose movements are reminiscent of modern dancers, rub strings, which amplify sound through the cups.

The Stringraphy is a contemporary instrument, but it has a strong tie with a long history of Japanese silk.
They had concerts at the World Heritage site Tomioka Silk Mill in Gunma twice. They are planning to collaborate with the Silk Science Research Institute to create the best silk string made of Japanese silk. The cups, however, though made from paper, last an incredible average of around 10 years! (Some have even lasted up to 15!) In fact, it is said that the older the cups are, the better the resulting sound.

Kazue Mizushima and the Creation of “Stringraphy” 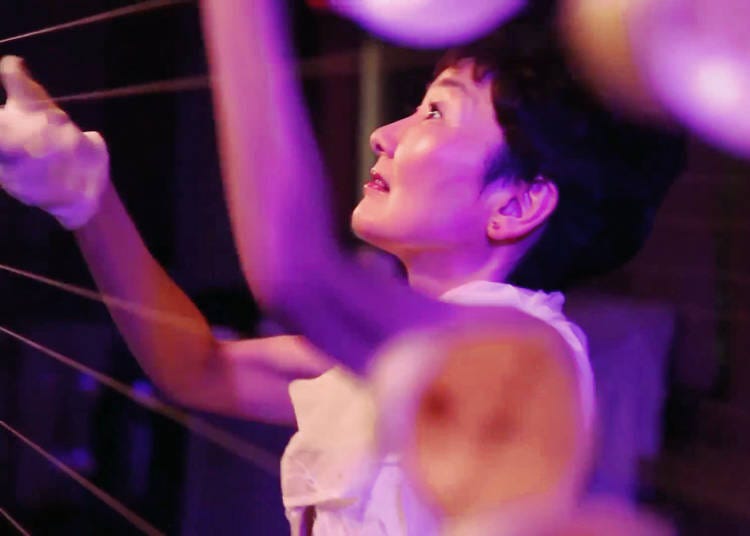 The Stringraphy Ensemble and Studio EVE was created in 1992 by composer Kazue Mizushima, along with fellow musician and the current Executive Producer Midori Yaegashi. However, it seems that the birth of this new instrument was a long-time coming. Before coming up with the idea for Stringraphy, Mizushima had already been part of the music world for quite some time. The Tokyo native earned both a BA in composition from Toho School of Music and an MA in composition from the University of California at San Diego.

Not satisfied with using traditional and established instruments, Mizushima sought to create a completely original musical art form. Her drive sparked the birth of Stringraphy, which made its first appearance as part of an outdoor performance at a Yamagata art festival. The theme of the festival was a collaboration with nature, and an inspired Mizushima transformed a forest into a giant harp-like instrument. It was an avant-garde fusion of nature and a novel sound. This was the beginning of Stringraphy. 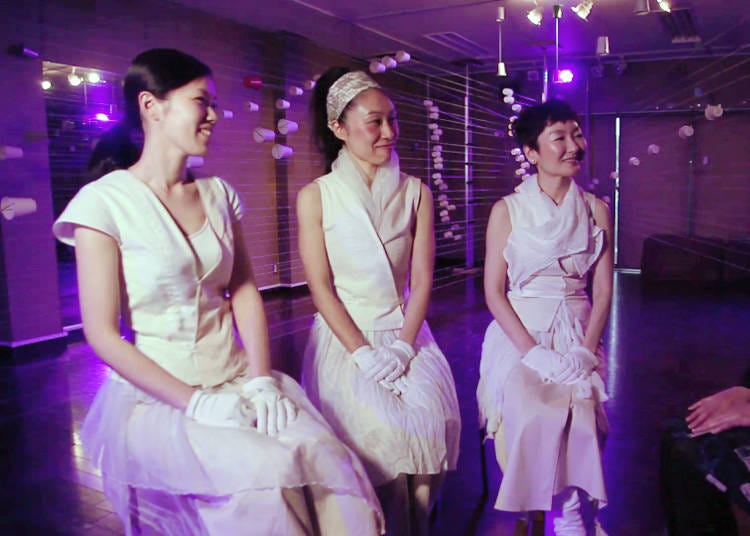 Following the new instrument’s debut, the Stringraphy Ensemble was formed. A small group of gloved performers (typically between 3 to 5, depending on the piece being performed) manipulate the many rows of silk strings to make music that is unlike any other instrument before. The musicians’ movements are so graceful and at times even athletic, that the audience may feel as though they are watching not only concert but something similar to a modern dance performance.

The ensemble has given over 1,000 performances worldwide, in venues and festivals in Asia, Europe, and North America to audiences eager to experience their experimental music expressions. They, of course, perform across Japan for a variety of events, and have even appeared in front of audiences as large as a thousand. Stringraphy Ensemble also regularly reaches out to the community by offering their workshops and performances at schools, hospitals, welfare facilities, and concerts. Workshops are an interactive experience that consists of a performance and a chance for the audience to play and create their own Stringraphy instrument. Several members of the ensemble speak English as well as their native language of Japanese, and are more than happy to explain the art form in whichever language audience members feel most comfortable with.

A Visit to Studio EVE 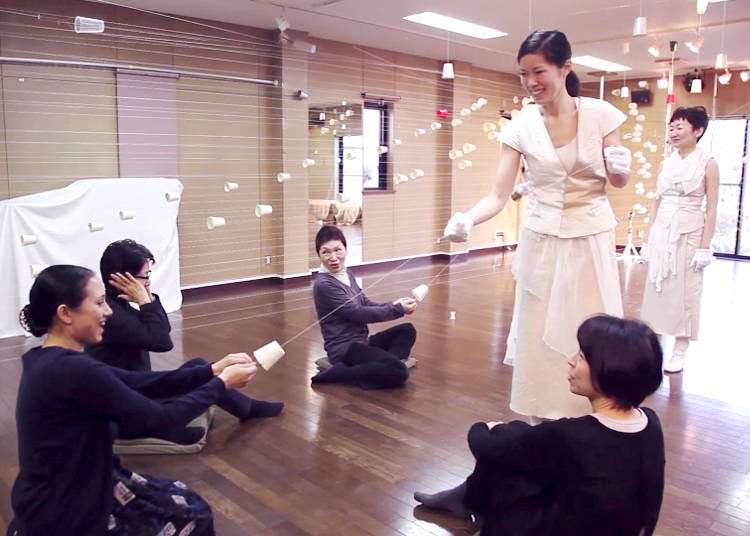 I took a visit to Studio EVE in Daitabashi to experience Stringraphy with my own ears, eyes, and hands. I entered the bright, modern-feeling studio to find strings stretched across the entire length of the room. I was instructed to make myself comfortable, seated on a cushion on the center of the floor. The silk strings were arranged in three distinct rows: two to my left, and one to my right, making up the bass, soprano, and alto sections of the instrument.

I soon realized that this was going to be unlike any performance I had witnessed before, as I was literally within the instrument itself! During my visit, I was treated to two stirring performances by Stringraphy Ensemble: It began with the familiar strains of Mozart’s “Eine kleine Nachtmusik,” followed by Kazue Mizushima’s hauntingly beautiful original work, “A Memory of Forest.” I was taken aback by the volume and power of the sound produced by nothing more than string and paper cups. The physicality and graceful movements further enhanced this unique musical experience, and I felt like I had become almost hypnotized, so to speak. 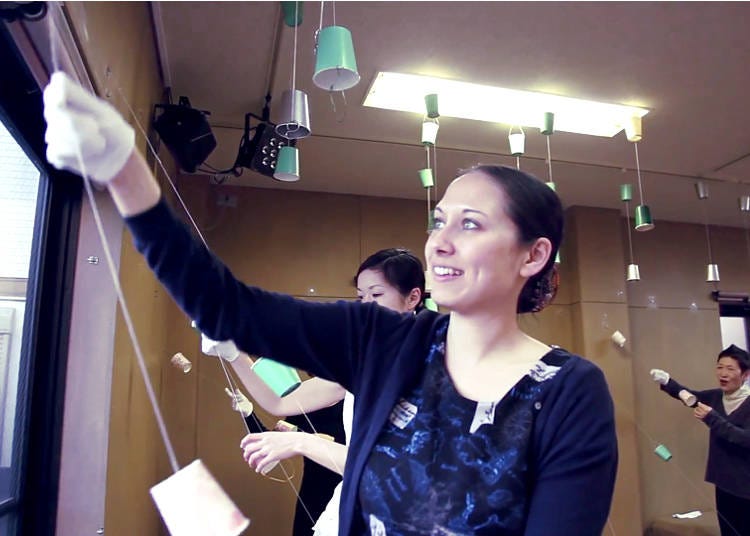 After the performance was finished, we moved on to the interactive portion of the workshop. Ms. Mizushima explained the mechanics of the Stringraphy instrument: how the mere vibrations of the string, amplified by paper cups, could create such a magnificent sound. She and the other members demonstrated how different ways of touching the string could produce a number of various sounds, from pleasant and dreamy to downright jarring.

I was then allowed to try making sounds with my own hands. During the workshop, each of the participants creates a mini-stringraphy instrument by making what looks like a paper cup telephone. Even this small and simply made craft can produce a surprisingly powerful sound. Once we had created our own instruments, we headed to the studio walls where various strings and cups were attached and fastened ours to hooks on the wall and floor. We were then given freedom to experiment with the various strings, using any of the methods shown earlier. The finale of the workshop was an encore of “Memory of Forest”–except that this time, the audience was invited to participate with the rest of the Stringraphy Ensemble for an improvisational version of the group’s signature piece. This was an unforgettable moment and for most people, a once in a lifetime chance to be part of such a unique musical art performance.

Want a Unique, Artistic Memory in Tokyo? Try Studio EVE’s workshop for yourself! 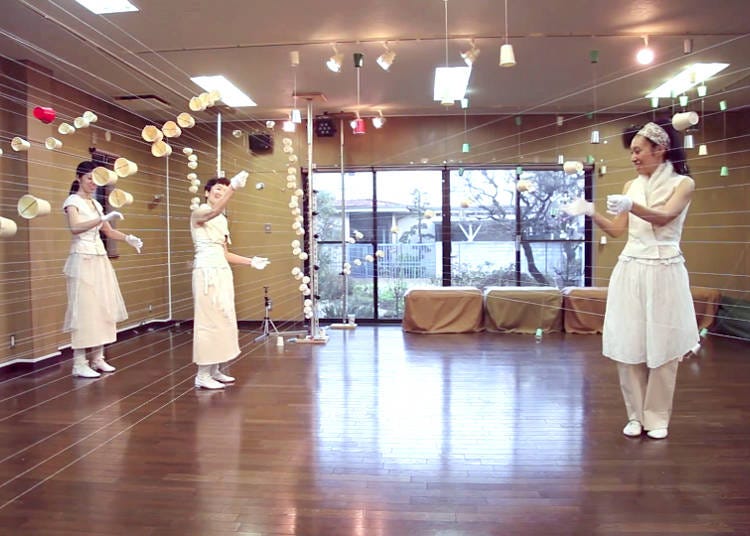 Even after 25 years, Stringraphy Ensemble shows no signs of slowing down. The Stringraphy vision is as strong as it has ever been, with performances and workshops given regularly. The group hopes to further share Stringraphy with people from around the world through their interactive workshops at Studio EVE, and encourage curious visitors to take advantage of their exquisite installation sound art. So, why not make a unique musical memory during your visit to Tokyo?