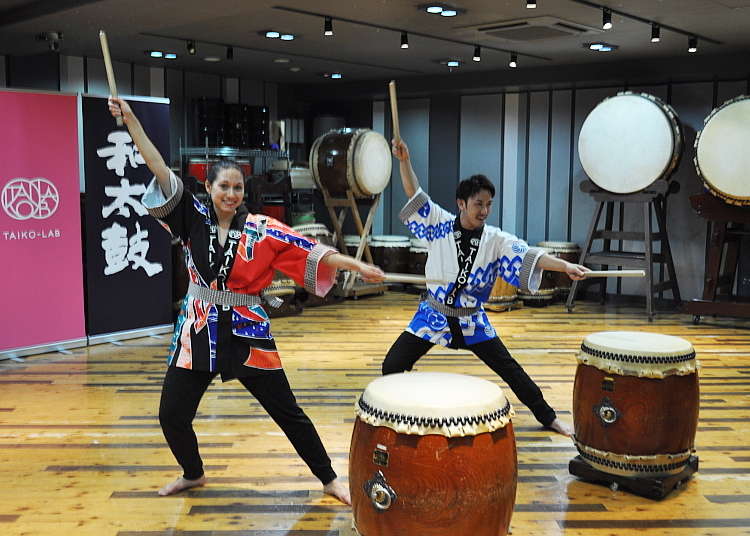 Have you always wanted to learn a traditional Japanese instrument? How about one that makes you exercise in the process? If the deep sound and rhythms of the traditional Japanese taiko drums have always spoken to you, why not try your hand at taiko drumming with a dynamic class? As I learned at TAIKO-LAB in Aoyama, taiko is more than just making sound; it’s about feeling the rhythm through your entire being!

Listen to the Taiko, Feel the Taiko... Play the Taiko? 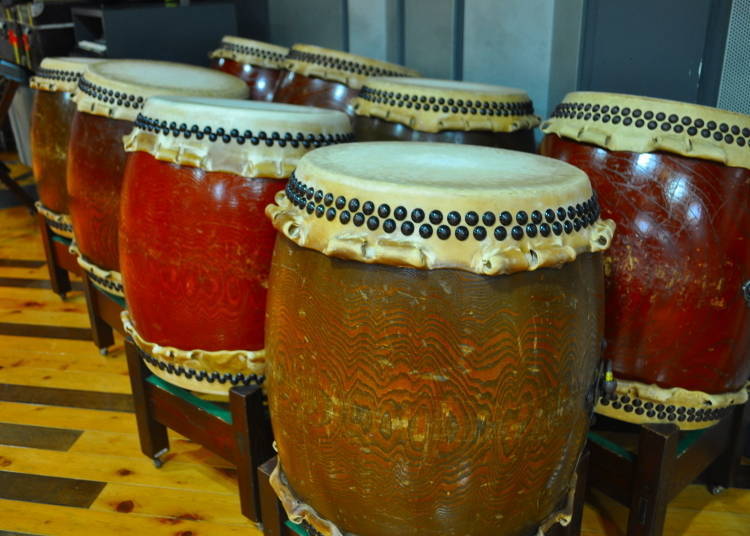 I’ve long admired the both the musicality and physicality involved in the traditional Japanese drums known as taiko. Often featured in traditional Japanese festivals, parades, and performances, the echoing boom of these large, percussive instruments is unmistakable. Taiko is so ingrained in Japanese culture that it has even been made into a wildly popular arcade game that incorporates the drumming into modern day pop songs. But, despite seeing the taiko performed countless times, dancing along to them at festivals, and playing the arcade game quite a few times, I had never before touched a genuine taiko drum, let alone attempt to play one! The good news is, if you’re in Tokyo you can try taiko, even if you completely lack any prior musical experience! I visited TAIKO-LAB to finally try genuine taiko drumming for myself. 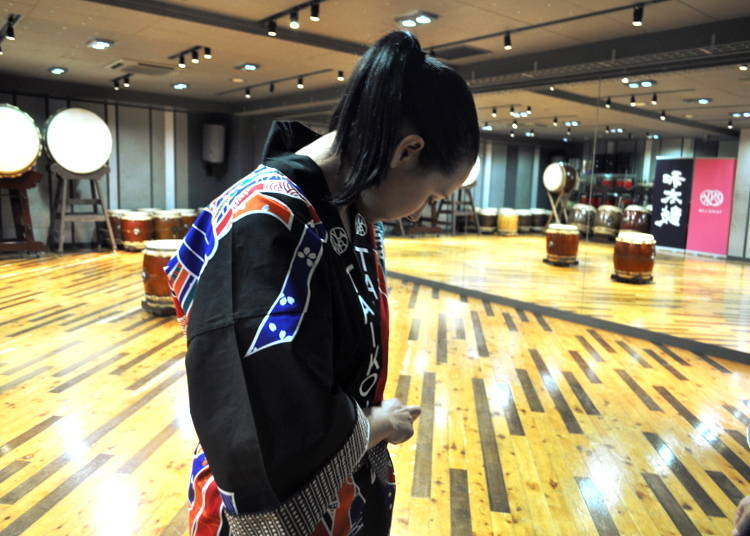 TAIKO-LAB is made up of three spacious studios, in addition to a locker room and a stretch-room that students can use before lessons. I came prepared with a spare change of comfortable clothes, which I could move easily in. I also brought a small towel, since I had heard there was a good chance of working up a sweat. Upon arrival, I removed my shoes at the front, and changed into my clothes in the locker room. I’m used to the Japanese practice of bringing a spare pair of “indoor shoes” in gyms, but in this case, there was no need, as I was told that students perform the lessons barefoot. There was just one more piece of clothing needed before beginning taiko: traditional Japanese coat known as the “happi.”

The Taiko Lesson Begins: Picking Up the “Bachi” and Warming Up 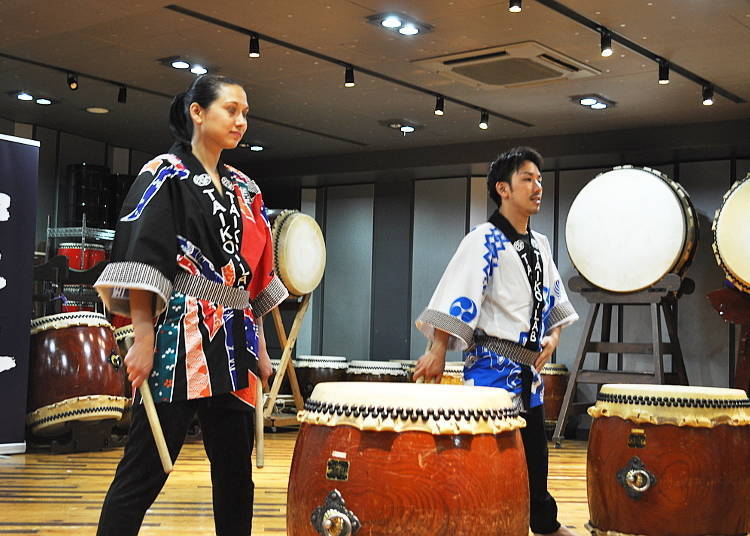 Now that I looked the part, it was time to begin taiko! As with most physical or musical activity, warming up is an important part of the process. I was given a pair of drumsticks, called “bachi,” which are both thicker and heavier than the typical drumsticks you’d see used in a rock band. Before I even approached the taiko drum itself, my instructor for the afternoon demonstrated the proper technique for holding the bachi. The key is to hold it firmly, but also loose enough so that it can move somewhat freely between your fingers. I practiced the moving the bachi, warming up my hands and wrists in the process. Finally, it was time for bachi to meet taiko! 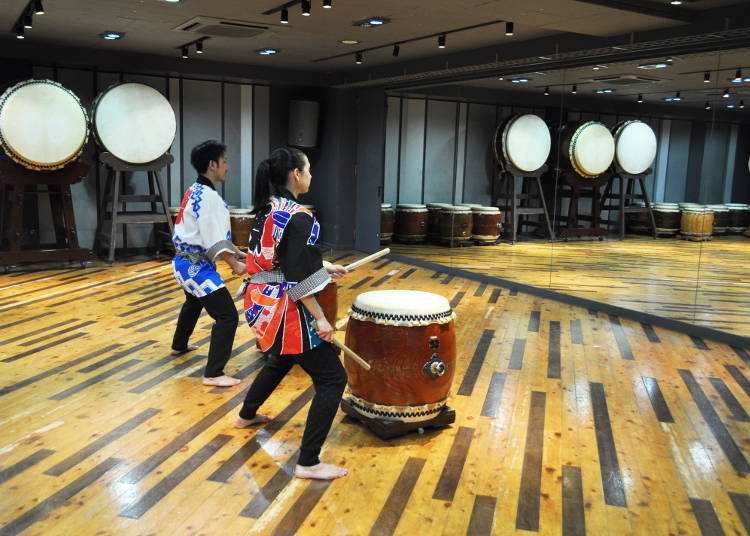 We walked to the center of the taiko studio, facing a mirror that covered the entirety of the wall. That, along with spotless floors, made it resemble a dance studio more than my image of a music rehearsal room. In fact, my teacher explained, taiko is as much about the performance as it is about the music being created. The way you stand and move is an integral part of the Japanese taiko experience. We each stood behind a drum, which stood from the floor up to just below waist-height. The basic stance is with legs open about shoulder-length apart. Legs should not be too stiff, and a slight bend of the knees is preferable. As far as I could gather, you should have a natural bounce to your knees as you play. However, it is important to keep your core muscles strong while playing taiko. I never even considered taiko as an abdominal workout, but it wasn’t long before I was starting to feel the burn! The taiko drums we used for the lesson were made from wood and cowhide, although different materials may be used as well. 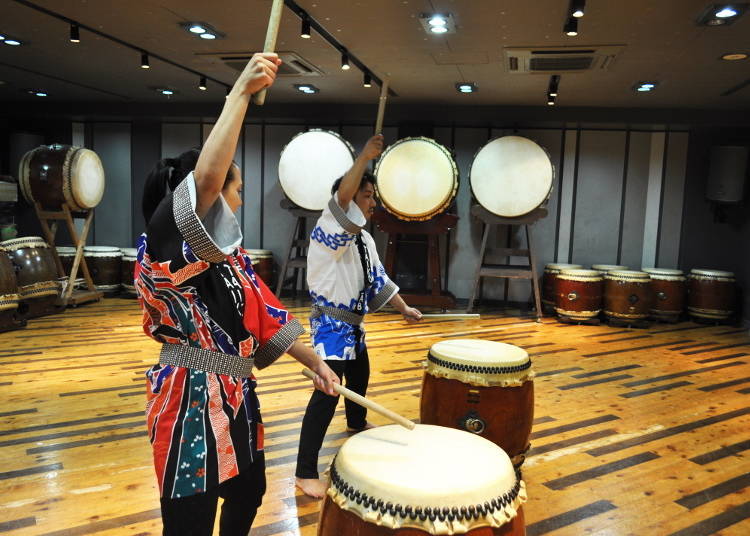 For the actual drumming, we began slowly. Thankfully, the instructor seemed fully understanding that I was a complete novice, and guided me each step of the way, stopping to explain further when I seemed to be having trouble. I practiced bringing each bachi all the way above my head and bringing it down to strike the taiko directly in the center. Despite making what I thought had been a pretty loud “DON,” I was told that I was being too gentle with it! It’s not often in Japan that you’re given the go-ahead to be as loud as you want, so I decided to take advantage of it and give it my all. 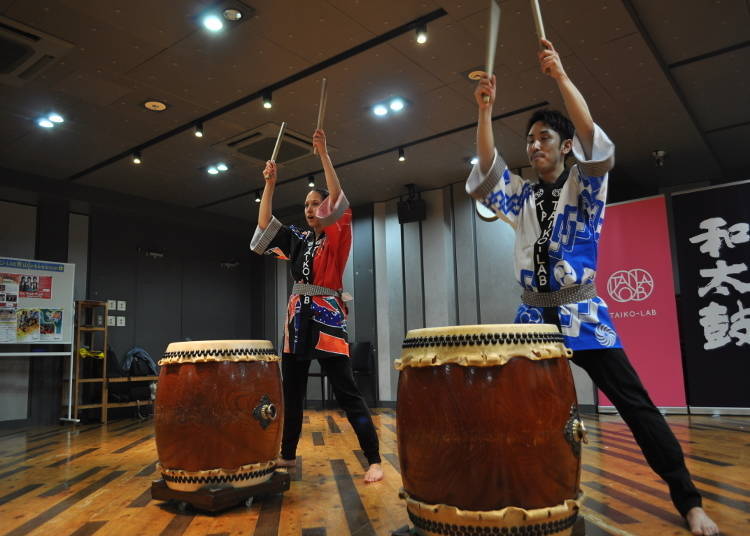 Once I mastered the basics (ok, I wasn’t anywhere near mastering them, but I had the gist of it), it was time to get really get into the rhythm of Japanese taiko. The instructor demonstrated a simple pattern: Three hits of the taiko, alternating hands, followed by both hands up. It turns out, that in addition to moving your body with the strike of the bachi, you should also shout to the rhythm. After I had gained a bit more confidence with that initial pattern, he added on to it, so it became three hits and hands up, three hits and hands up, finishing with seven faster hits with hands up once more. I continued doing this pattern as instructed, increasing the speed each time, and in the end we were moving so fast I really couldn’t bring my arms all the way up in time! 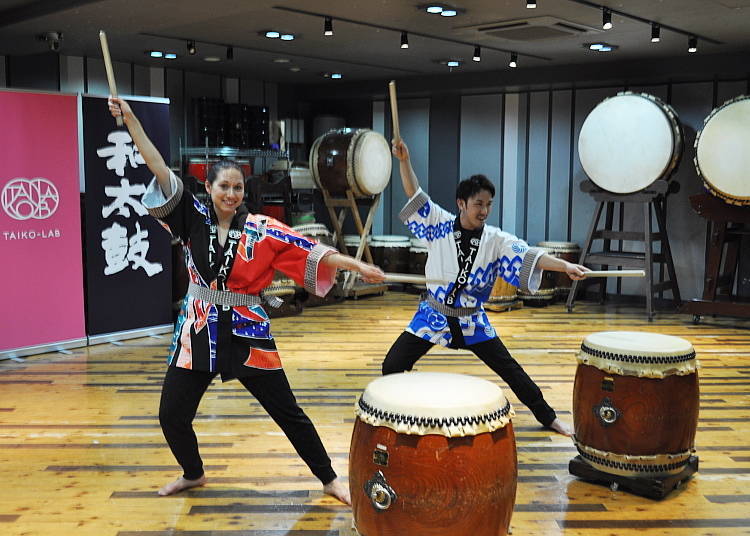 As mentioned earlier, Japanese taiko is not just about the music, it’s about the visual performance as well. Once finished with a routine, it is brought to a close with a final pose. The teacher explained that the final pose is a chance to shine, so we should ‘make it cool, make it beautiful.’ After a bit of practice I was really starting to get into it–the drumming, shouting, and posing! Just before striking the final pose, we both went into a freestyle during which we drummed in a variety of ways, including using the entire bachi, and even dragging the bashing around the studded outer area. I can’t say I did everything perfectly, but what I lacked in technique I like to think I made up for in enthusiasm and fun! 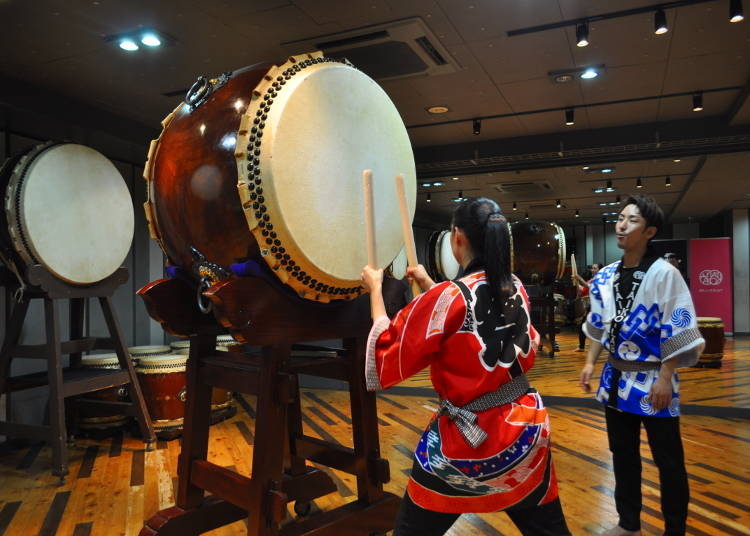 After the lesson was finished, I was shown some of the other taiko drums, including some that were specific to the Okinawa region. One of my favorites had to be the large taiko, called “odaiko” that is mounted on its side, so that it must be played with the drummer striking it straight ahead, slightly above their face–it’s an entirely different position of playing.

Although the main language of TAIKO-LAB is of course, Japanese, basic English support is offered on their website and in the class itself. On the day of my lesson, I went to the Aoyama studio, but there is also an Asakusa studio as well. Each location includes three studios, with odaiko equipped in the biggest one. The Asakusa studio can hold up to 60 people total at a time, and the Aoyama studio can hold a maximum of 100 people. Each class lasts 60 minutes, and prices vary depending on what kind of class you are interested in. Reservations for a TAIKO-LAB class can be made easily via their English website.