HOME Tokyo and Surroundings Tokyo Shibuya Over 5 Million Vending Machines in Japan?! Revealing the Reasons Behind the Obsession 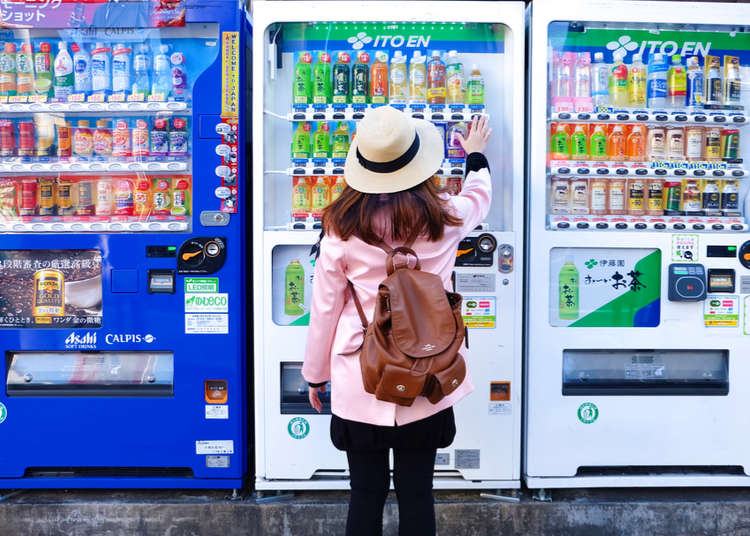 One thing that basically every tourist immediately notices is the large number of vending machines in Japan. They’re at every station, in every building, and you’ll practically stumble upon a vending machine no matter where you’re going, even in the countryside.

There are genuine reasons for the abundance of these vending machines. We asked Hachiyoh, a Tokyo-based company responsible for vending machine maintenance: why are there so many in Japan?

1) Because Japan is Safe! 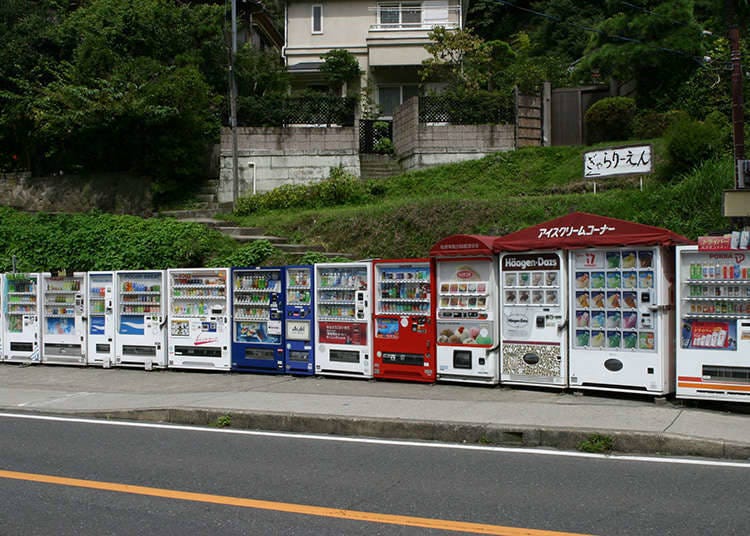 There is very little vandalism in Japan, so even if a vending machine is installed in a public space such as a park or on the sidewalk, it rarely gets broken.

2) Because Busy People Love the Convenience! 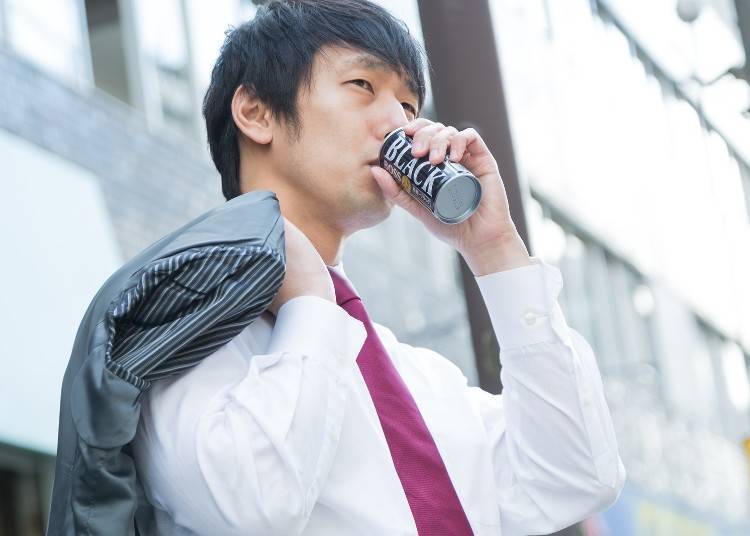 Japan is (in)famous for its long work hours and a lot of working Tokyoites are used to doing plenty of overtime. The result of that is less time, of course, and sometimes, people are even too busy to hit up the nearest convenience store. Then, there’s nothing more convenient than grabbing a quick and tasty drink from a vending machine on the way!

3) Because Everyone Can Become a Vending Machine Owner! 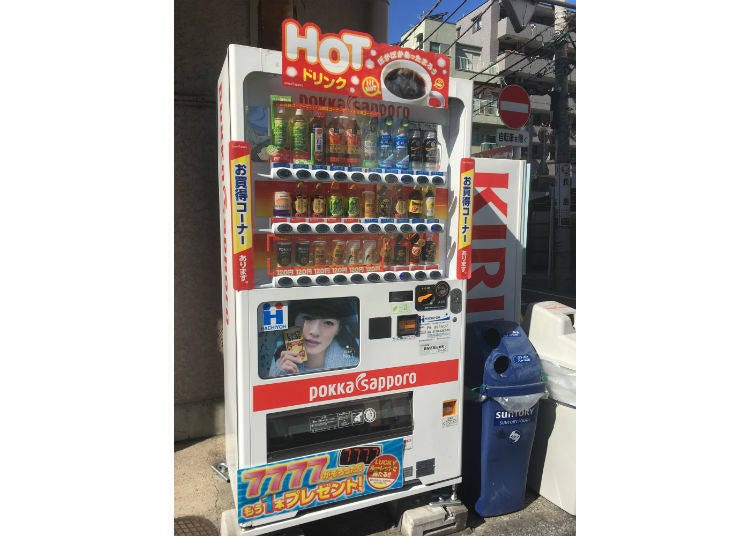 This reason isn’t widely known but basically, each and everyone can apply to set up their own vending machine. After the application is approved by the management company, you’ll pay an installation fee of tens of thousands of yen (a few hundred dollars). If the spot you chose for your vending machine is good, however, it’s a lucrative business and quite a few people have done this as a kind of side job. As of 2017, all vending machine slots in Japan are taken.

4) Because the Maintenance is Flawless! 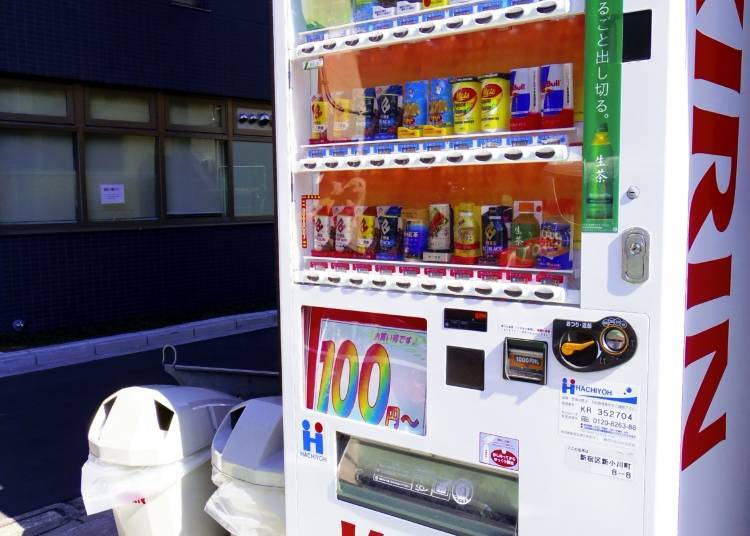 Trash cans for PET bottles and cans are either installed directly in the vending machine or right next to it, providing people a place to throw away their empty drinks in an otherwise rather trashcan-lacking country. The more vending machines there are, however, the more trashcans need to be emptied. Specialized maintenance companies make sure that there’s no litter, restock the machines regularly, and perform all sorts of other maintenance-related tasks. It’s a system that works so flawlessly, you’ll be hard-pressed to find an overflowing trashcan or malfunctioning machine, making vending machines almost ridiculously reliable.

5) Because Even Now, The Prices Stay Low! 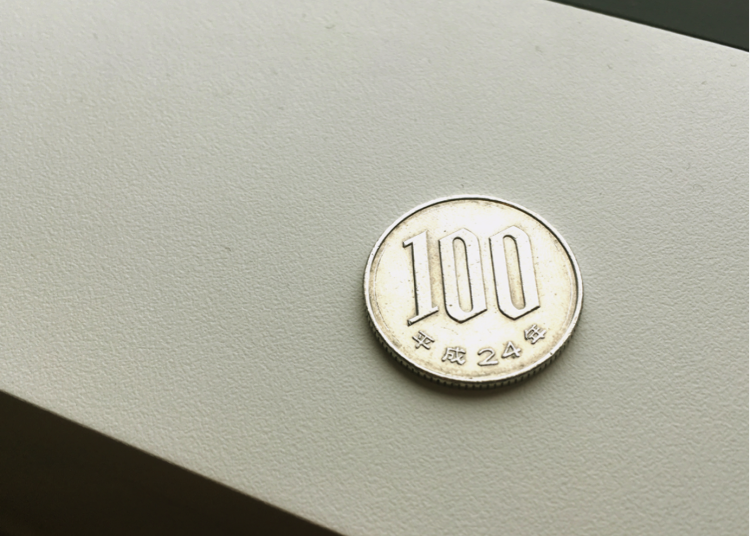 As of 2017, the prices for drinks sold in vending machines in Japan still are surprisingly low, even while Tokyo has a reputation for being expensive. Coffee costs 130 yen, while 500ml of juice or green tea are a mere 160 yen, generally speaking. Some decades ago, every drink could be had for one single coin, but the raising consumption tax has caused vending machine drink prices to rise with it. One thing that has stayed steady is the convenience, though. Without the need to line at a cashier and even offering to pay with electronic money, vending machines definitely have surpassed the test of time.

How to Use a Vending Machine 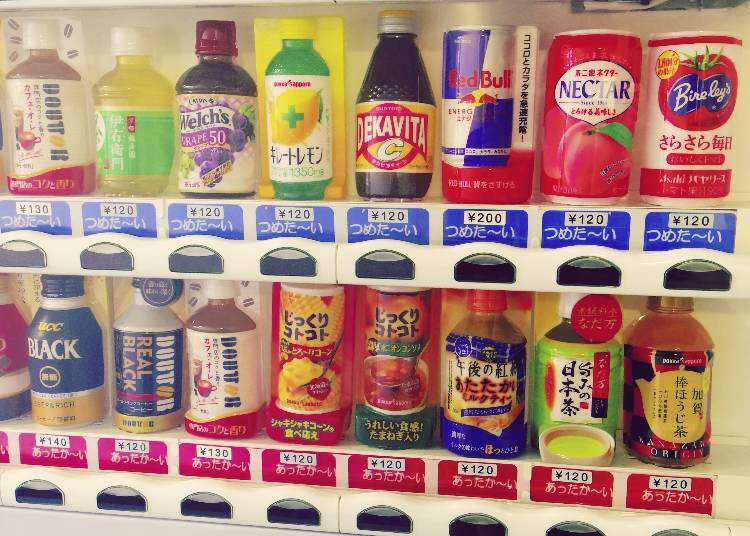 In summer, most of the vending machines in Japan only offer cold drinks but as soon as the temperatures start to drop at the beginning of winter, warm beverages will be part of almost every machine’s selection. Even if you can’t read Japanese, it’s easy to understand: cold drinks have a blue label, hot drinks have a red label.

Generally, vending machines accept coins between 10 yen and 500 yen and even 1000-yen bills. Recently, a lot of vending machines also accept electronic payment in the form of prepaid cards – simply touch the little panel with the card, it even works through your wallet!

These 7 Drinks Perfectly Capture the Taste of Winter in Japan 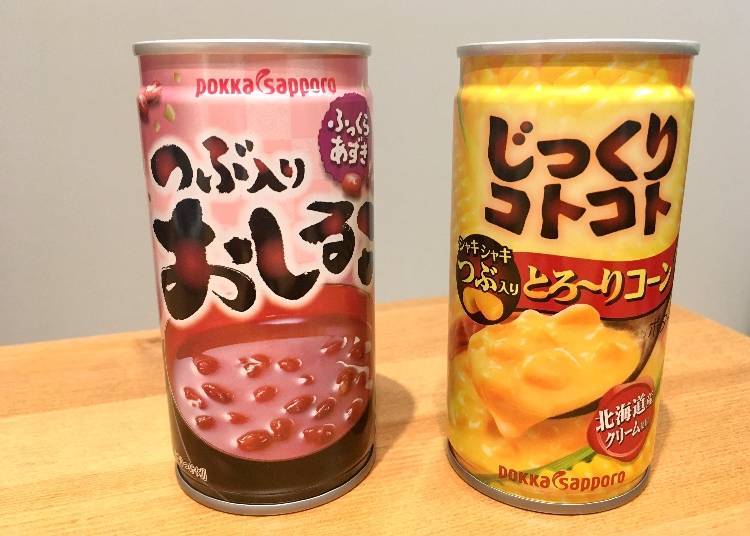 When winter is just around the corner, vending machines don’t just offer hot coffee and tea but also corn soup and oshiruko, a traditional sweet soup made out of red azuki beans. Those two are rather hard to come by in convenience stores but are a staple drink in vending machines! Here’s how they taste like. 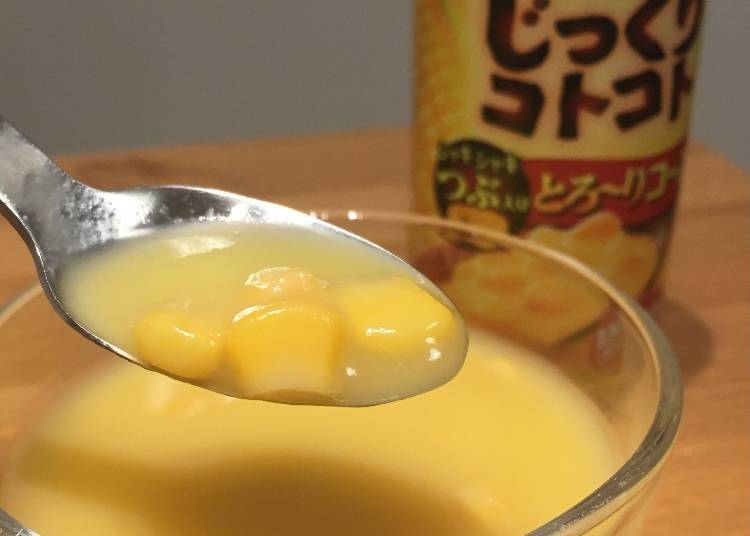 While the thought of corn soup probably doesn’t knock you off your socks, Japan’s “corn potage” is surprisingly delicious! The can is a bit smaller than regular, holding 190ml of soup, but the little warm snack contained 10 whole corns. Don’t be discouraged by the thought of drinking soup from a can, it’ll warm you up right to the bone and recharge your energies! 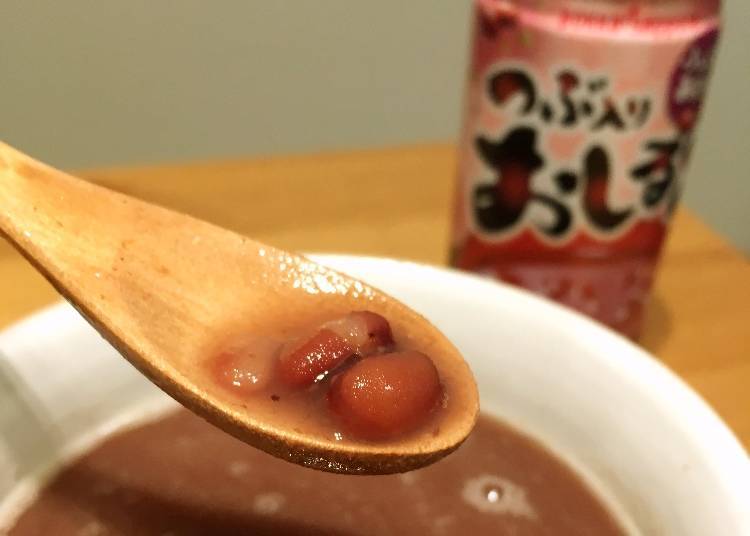 The oshiruko can has fewer beans than the corn soup has corn, but it is equally delicious. We especially recommend pouring it into a bowl and mixing it with a dash of milk. Japanese milk tends to be thick and creamy, harmonizing excellently well with the gentle sweetness of the beans! 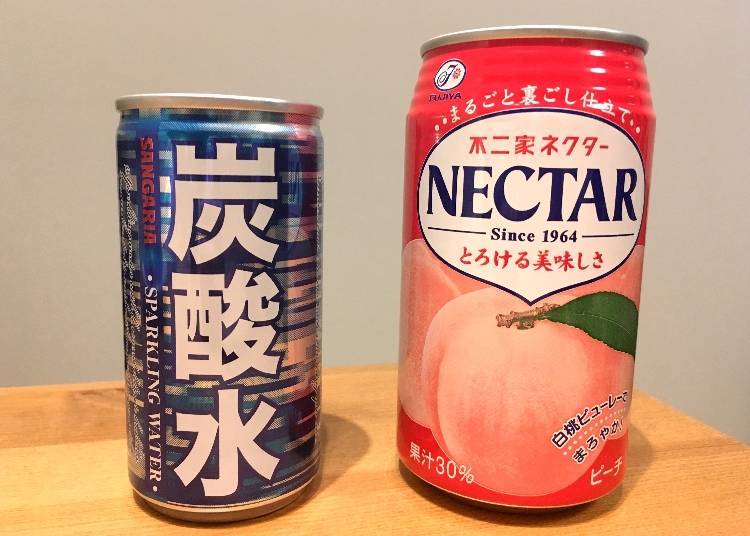 Fujiya’s “Nectar” peach juice boasts 30% of actual juice, making for a sweetness that is just right and not overwhelming or artificially tasting. To fancy it up, get carbonated water and make yourself a fizzy peach drink!

Try ALL the Vending Machine Drinks! 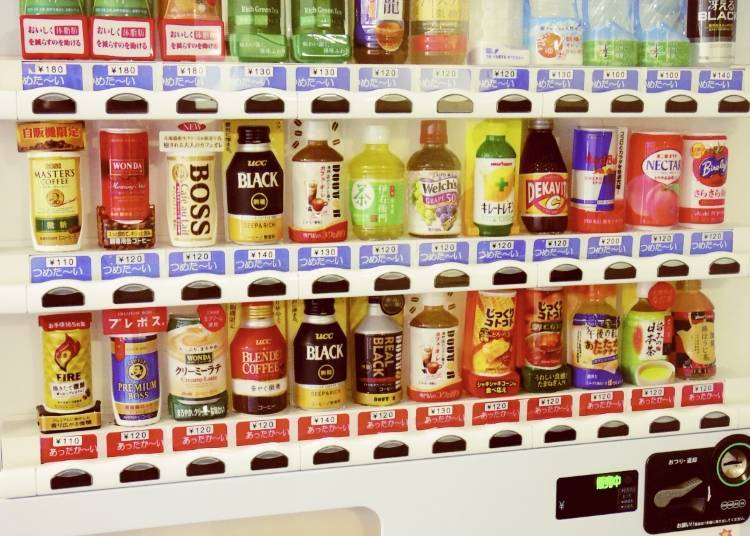 Vending machines in Japan offer lots of drink varieties that you won’t find anywhere else, neither in convenience stores, nor in supermarkets. Keeping an eye out for these limited editions is a fun thing to do as you explore Japan and if you find something that piques your curiosity, don’t hesitate on spending a coin or two! It’ll spice up your trip with flavors that are delicious, crazy, and unique!