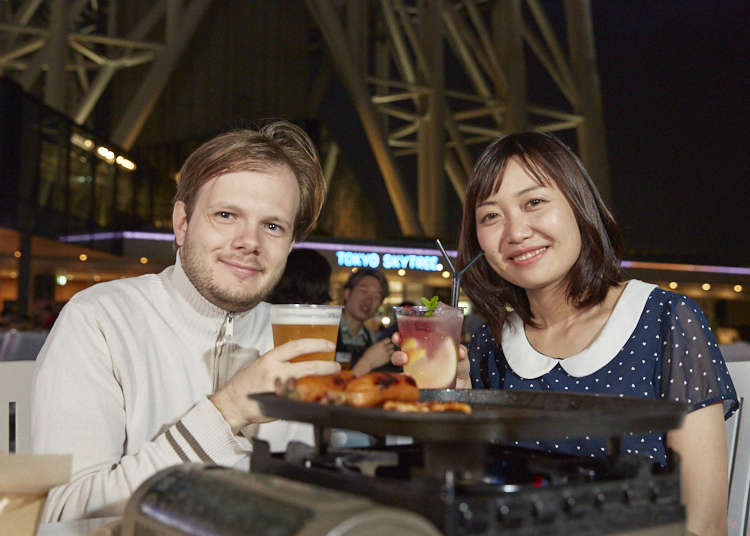 Summer means beer garden season because there’s nothing better than a frosty beer to cool down in the summer heat! In Tokyo, beer gardens open one after another once the temperatures rise, drawing in the thirsty crowds.

Japanese beer gardens aren’t just a favorite of the locals, but more and more tourists discover them as a great way to end an exciting day of sightseeing with cold drinks, good food, and a fun atmosphere. This time, we asked a beer-loving Frenchman and a Chinese woman who swears by Japanese hot sake to check out one of Tokyo’s most intriguing beer gardens: the one right at the foot of the famous Tokyo Skytree! 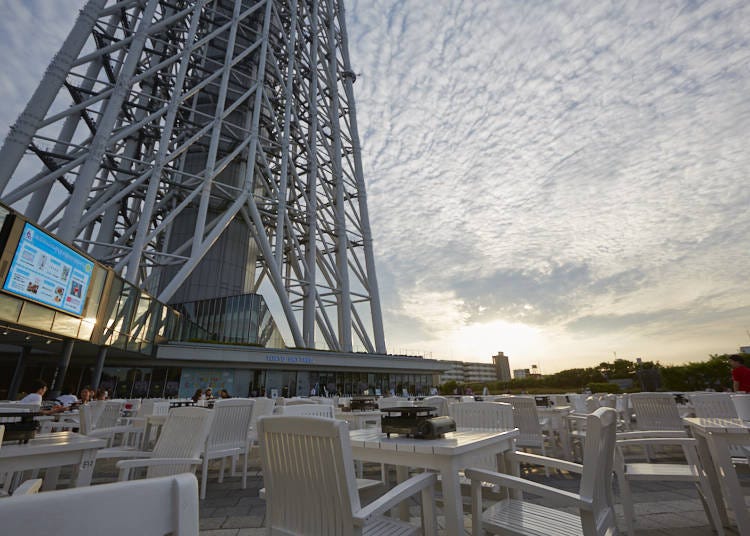 The “Let’s Look Up! Beer Garden” is located at the Sky Arena on the 4th floor of Tokyo Skytree Town. As the name suggests, the big feature of this beer garden is that the magnificent Tokyo Skytree is towering right over you as you enjoy a nice drink.

To give you an authentic impression of what this place is like, we’ve asked Quentin from France’s Bretagne and Shin from China. 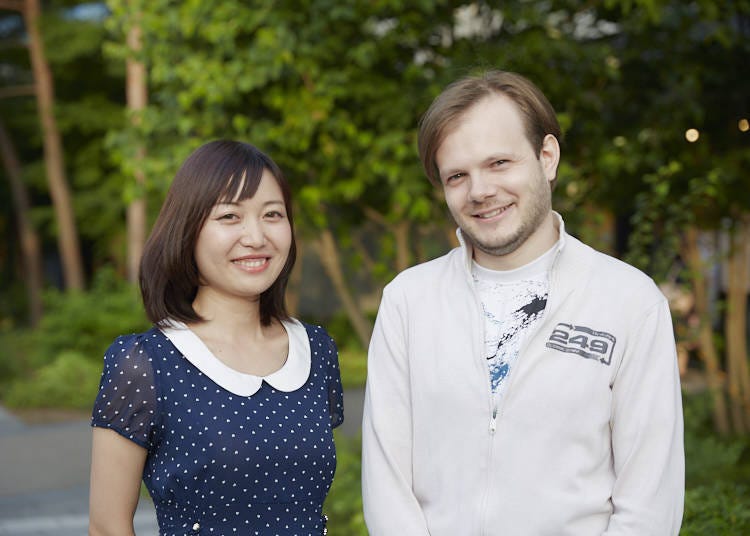 Is this the first time you’re going to a Japanese beer garden?

Quentin: “Not at all, I’ve been to various Japanese beer gardens. Of course, I’m a fan of beer.”
Shin: “Yes, it’s my first time, actually. I’m excited because I love beer as well!”

Are there beer gardens in France and China?

Quentin: ”I don’t think there are beer gardens in France, no. But that’s because France has a strong terrace culture. It’s common to enjoy beer and wine on an open-air terrace.”
Shin: “Hm, it’s not like there are no beer gardens in China, but there are few major ones attached to sightseeing spots or famous locations like this one. It’s awesome that you can connect sightseeing with drinking beer, though!”

This is the “Let’s Look Up! Beer Garden.” This year, the theme is “meat bar” and we can look forward to a delicious feast with plenty of meat! 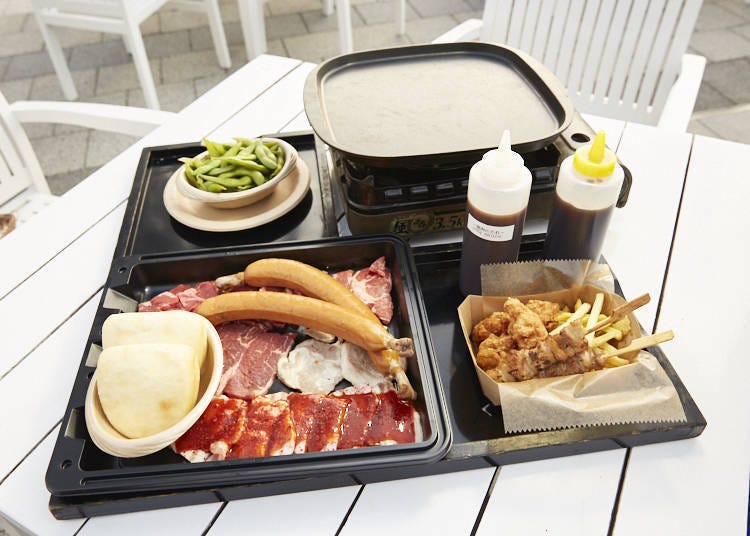 Today we’re having the 120-minute all-you-can-drink and all-you-can-eat dinner plan for 6,000 yen (tax included). It comes with an extensive barbecue set that comes with meat delicacies such as Japanese beef, Angus beef, pork Boston butt, 5-inch sausages, and more! Of course, there’s also a nice variety of side dishes, including fried potatoes, fried chicken, charcoal-grilled spicy pork, edamame (green soybeans), steamed buns, and so on. The best part is that ordering more meat is free of charge, so dig in to your heart’s desire,

Our two beer garden testers first get themselves a drink. Beer and other beverages are served at the drink booth by the staff. 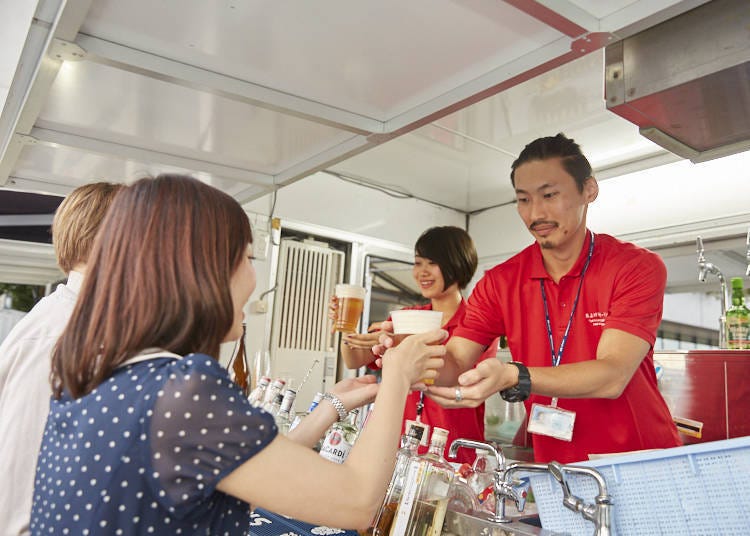 The beer is Asahi Super Dry. On top of that, this beer garden boasts a nice selection of cocktails and long drinks, such as highball, shōchū, ume liquor, and wine. Of course, there’s also a variety of soft drinks on tap.

It’s 6 p.m. in the evening. The sky is still bright and our two testers raise their glasses to a fun night with the iconic Tokyo Skytree in their back. 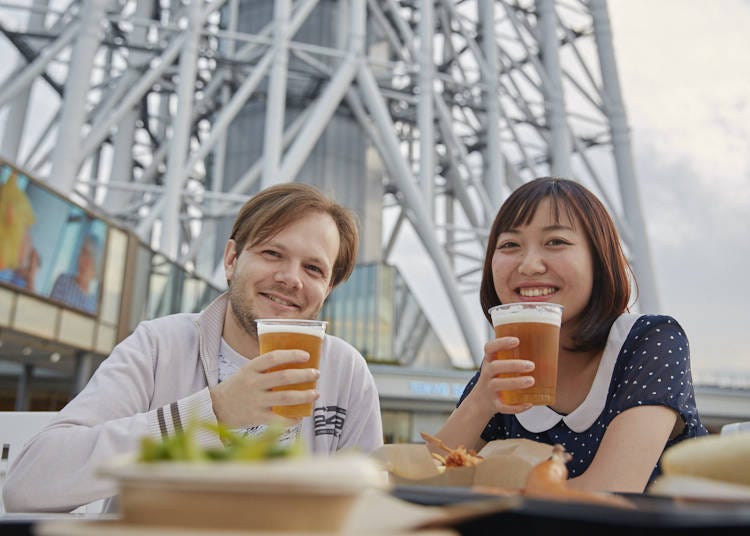 Quentin: “Ah yes, this is nice. I generally like Belgian beer, but this one’s refreshing and delicious as well, isn’t it?”

Shin: “I’m used to drinking Tsingtao Beer, so I like the deep flavor of Japanese beer. It has a richness that Chinese beer doesn’t have, I think. Mmh, drinking beer on a sunny day is the best! My favorite drink is Japanese hot sake after all, but for a barbecue, nothing beats beer.

Quentin: “There are few buildings around and the breeze feels nice. Look, the meat is done, so let’s start eating!” 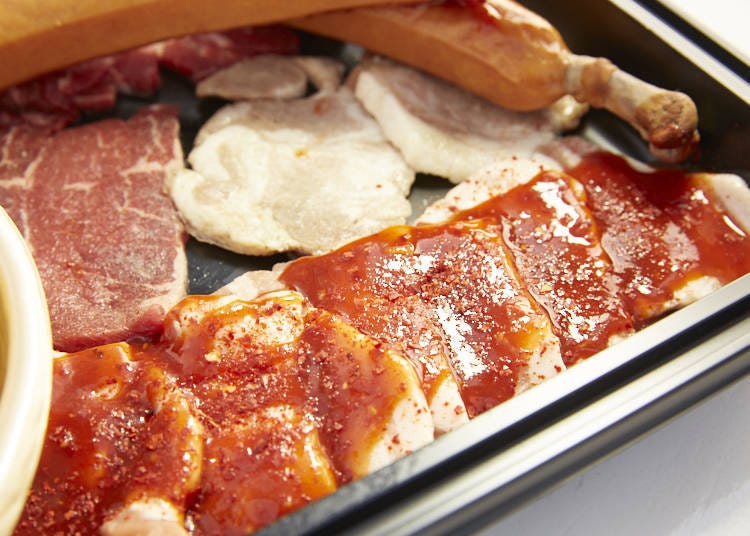 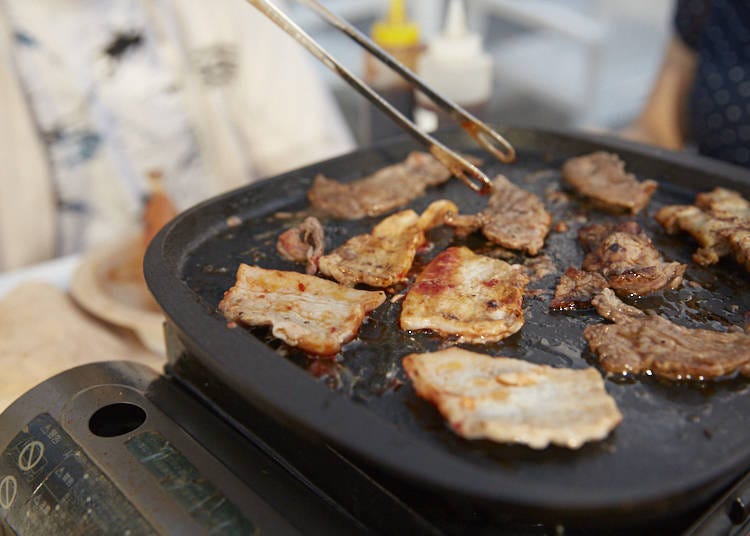 Shin: “In China, it’s usually the men grilling the meat at a party. What about France?”
Quentin: “It’s pretty much equal between men and women. In those cases, it’s best to be just eating, right? (laughs)”
Shin: “I like how well the Japanese beef goes with the pleasantly sweet barbecue sauce. I could keep eating this nonstop. Let’s grill more of it!” 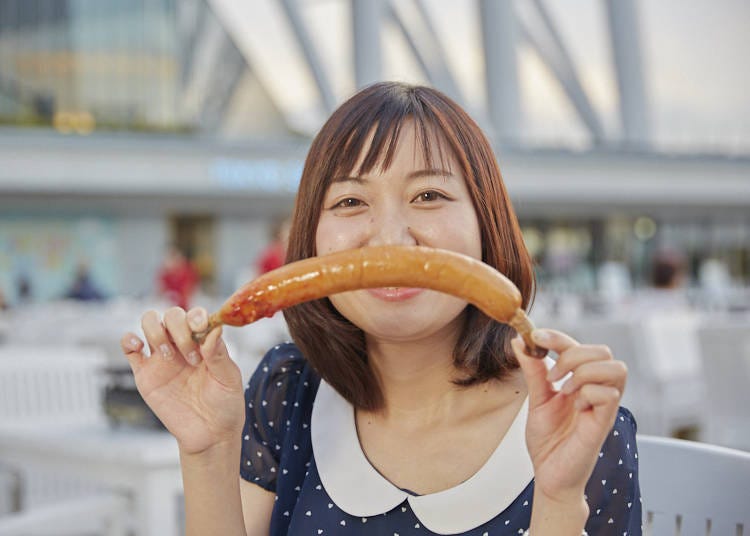 Shin: “Wow, look at that massive sausage on the bone! It looks super yummy!” 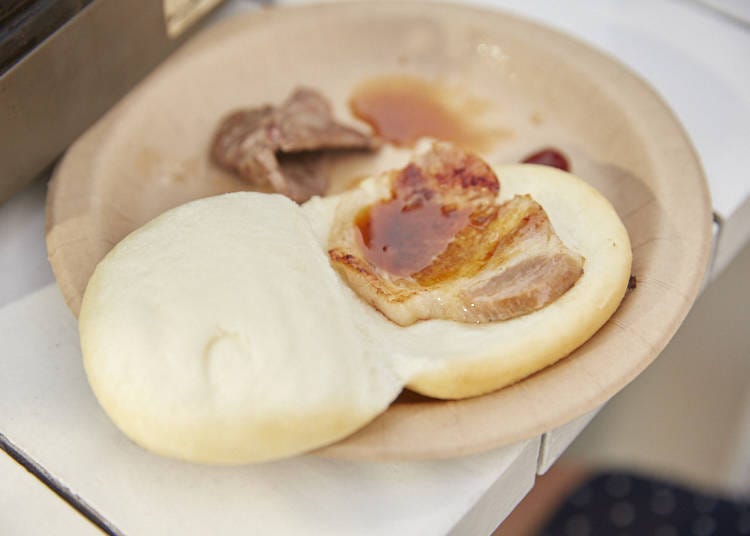 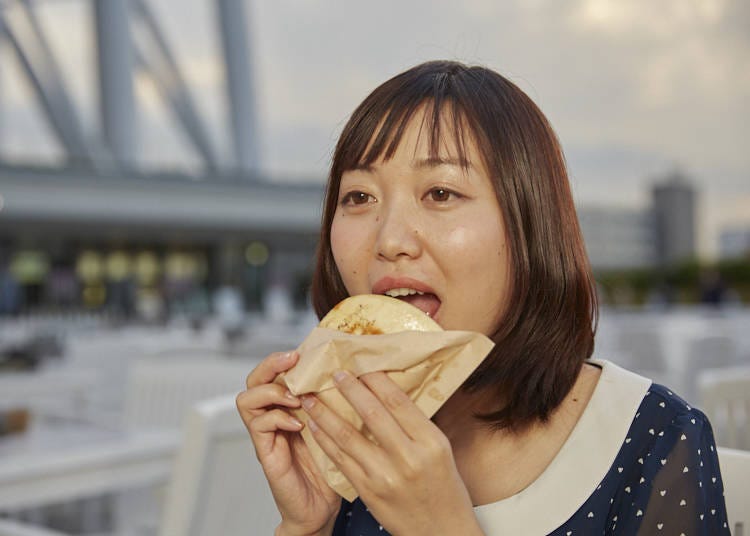 Shin: “The steamed buns are nice as well! Try putting a piece of pork Boston butt between them – it’s the best. I basically don’t need anything but that!”

Quentin: “Huh, that is pretty good! Let’s get more of that! (laughs)” 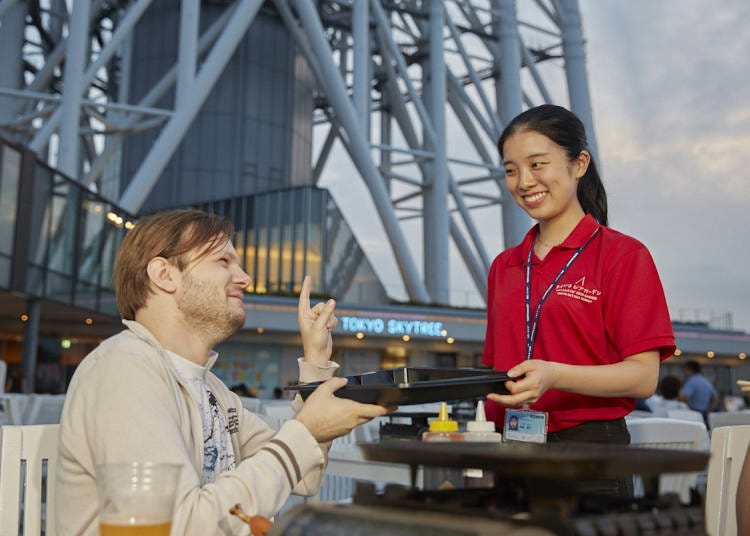 Because this beer garden is directly at the foot of Tokyo Skytree, it’s not uncommon to see half of the guests being tourists from overseas. The menu is available in English, Chinese, and Korean and the staff is equally multilingual. Quentin asked for an additional dish in English, for example.

We started our beer garden experience at around 6:00 p.m. and after an hour, the sky starts to fade to night. That’s when the illumination of Tokyo Skytree is lit up and the atmosphere becomes quite romantic.

Coming in the evening means getting to experience the sunset over Tokyo, followed by the elegant light-up of the city’s iconic tower. It’s a scenery like no other, that’s for sure. 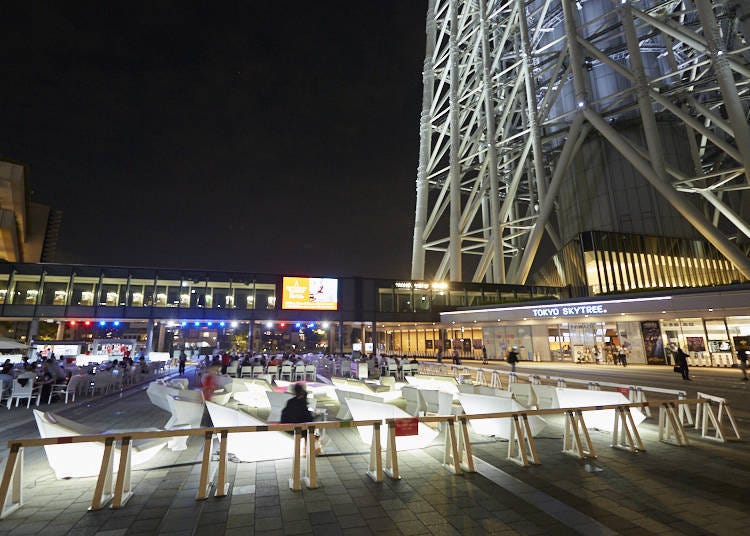 The “Let’s Look Up! Beer Garden” offers more than all-you-can-drink sets, however. There’s also casual plans that feature beer and a variety of side dishes, but what we’d especially like o recommend is the “special seat plan.”
As the name suggests, you’ll get to relax in specially designed seats that almost look like beds and let you gaze up at Tokyo Skytree in a comfortable and enchanting way. It usually costs 1,500 yen per person, but Quentin and Shin got to try it out for us. 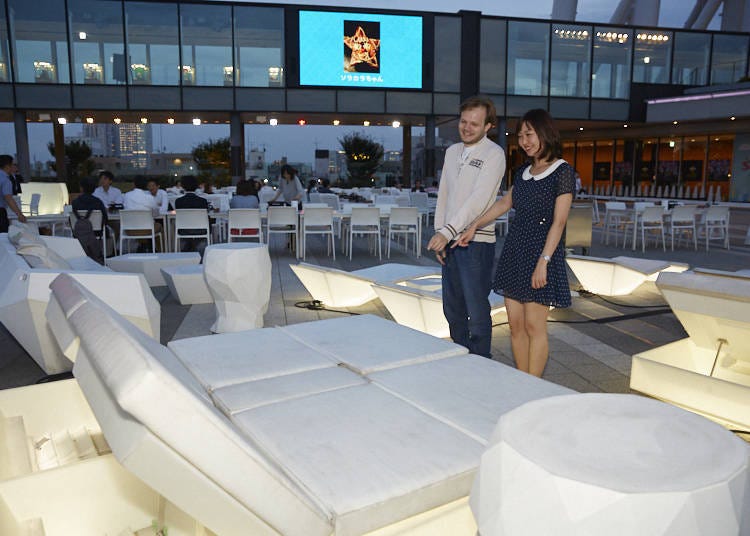 Shin: “Do you think we can try sitting on this special seat? It looks wide and really relaxing, I definitely want to try that while on a date!”
Quentin: “Welp, today you have to make do with me, I’m afraid. Although it’s a little bit embarrassing... (laughs)” 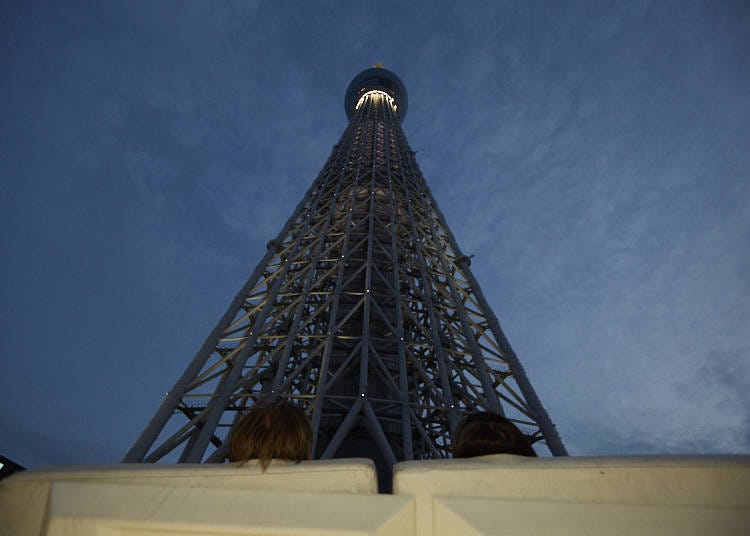 Shin: “Wow, the tower looks really close. I don’t think you get a view like that anywhere else. Ah, this feels nice! For 1,500 yen per hour, I’m sure it’s fun to bring fried potatoes, fried chicken, and char-grilled spicy pork to snack on!”
Quentin: “Yeah. I think you have to ask for drinks separately, but sipping slowly on a drink and enjoying a light snack should be rather fun.” 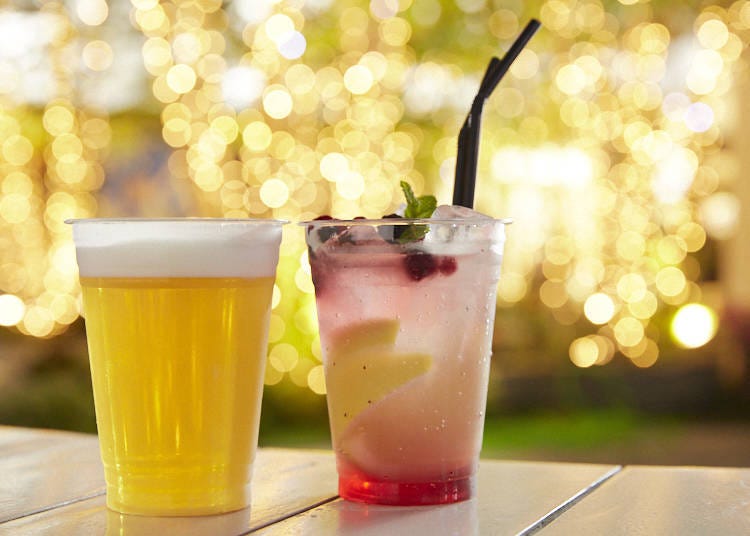 After enjoying a plethora of barbecue delicacies, plenty of beer, and a marvelous view from the special seats, our two beer garden testers toast to their successful evening with a last beer and a raspberry-grapefruit sour. 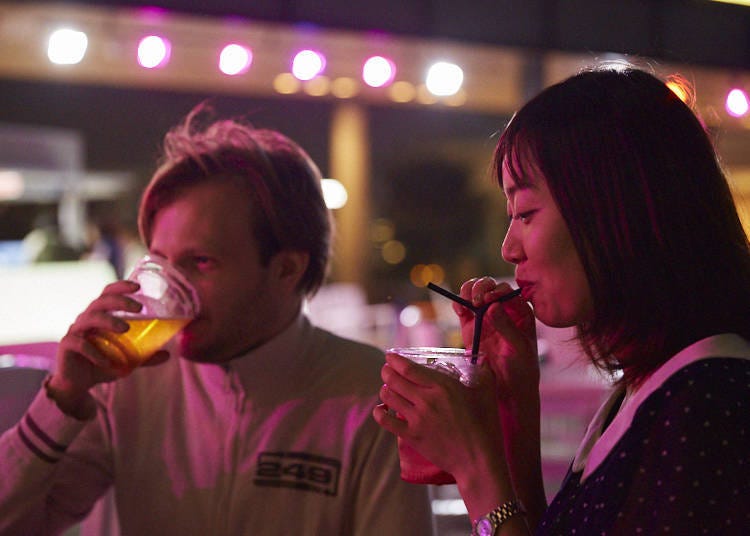 Quentin: “I like Japanese beer gardens because they boast various fun features that vary by location. The atmosphere is fun, they’re spacious, and it’s nice to drink under the open sky. This one felt more relaxing and I could drink leisurely than at other beer gardens. Once the sun has set, the atmosphere is genuinely romantic.”

Shin: “Really, the gentle breeze was very pleasant! We even got to do some sightseeing while feasting on tasty beer and food, it’s a great deal for sure. As far as my first Japanese beer garden experience goes, this was really fun! It seems like a great spot for a date, and the next time my Chinese friends visit me in Japan, I’ll show them this place as well. Those steamed buns were super good, I’d like to take some home. (laughs)” 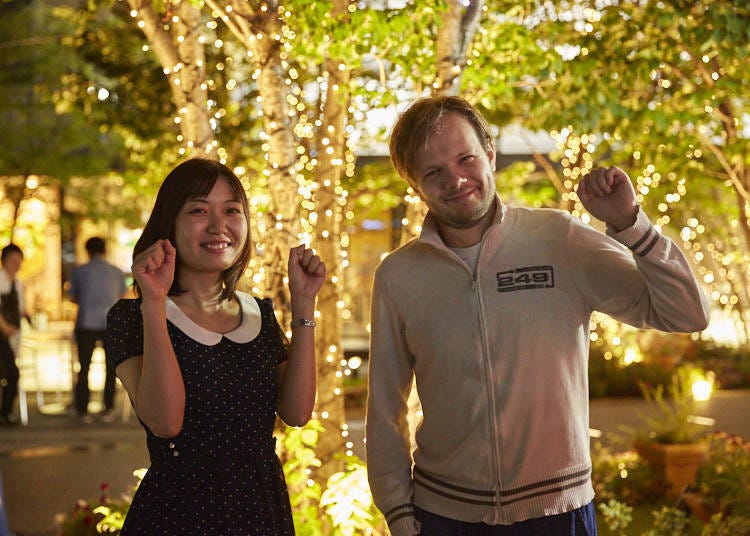 Both Quentin and Shin seemed to have a great time at this Japanese beer garden. While this one boasted a stunning scenery of Tokyo Skytree, other places have their own unique charms. In any case, drinking a cold beer on a sunny day is just amazing, isn’t it? Now, which beer garden should we check out next?