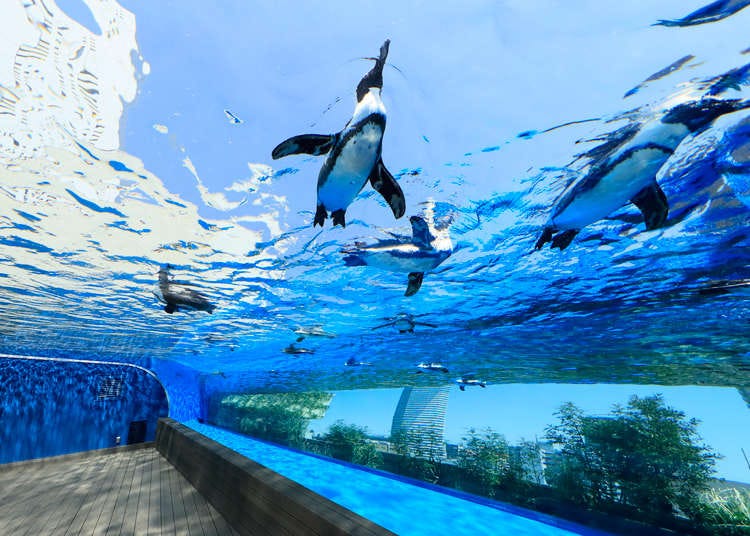 Sunshine City in Ikebukuro, one of Tokyo's main shopping districts, is a popular spot offering a variety of amusements, such as an aquarium, planetarium, observation deck, an indoor theme park called Namjatown, shopping facilities, and even a hotel.

Sunshine City is popular among tourists and especially couples on dates because you can spend days here enjoying yourself to the fullest. 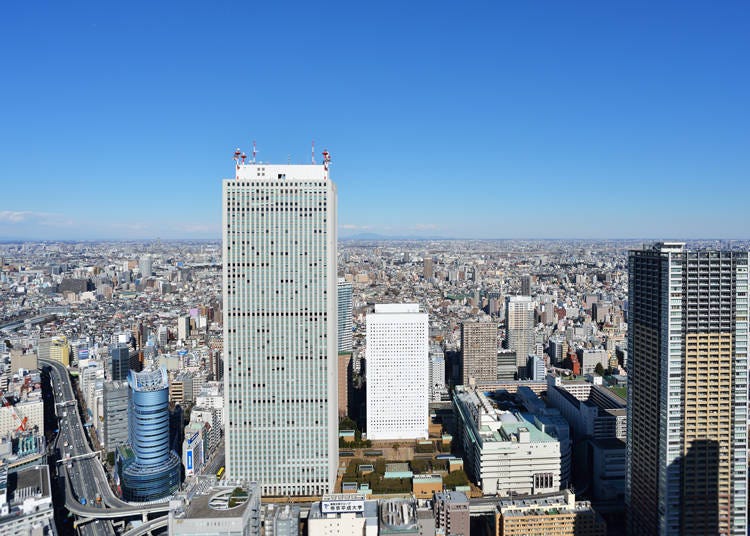 Great spot for a fun day out! 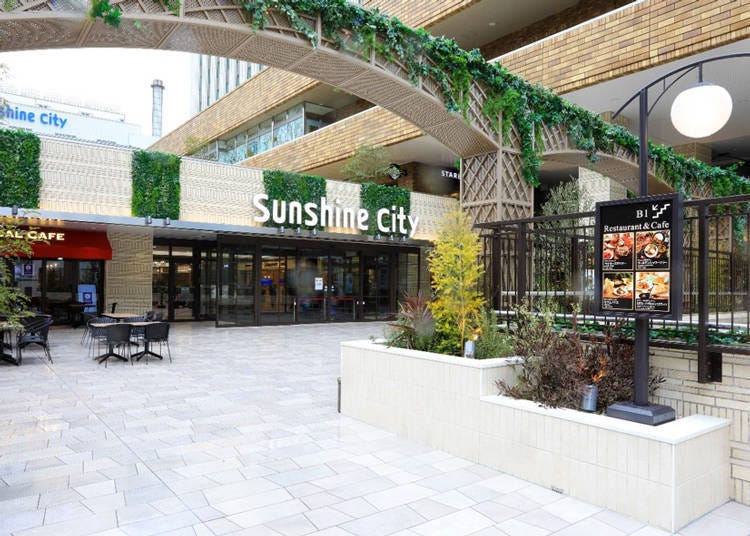 Points of interest include the view of Tokyo from the Sky Circus Sunshine 60 Observatory that is 251 meters above sea level (220.9 meters above ground), the Sunshine Aquarium located 40 meters above ground on the roof of the World Import Mart Bldg., the Konica Minolta Planetarium Manten in Sunshine City, a character greeting original show at Namjatown, anime and games in Mazaria, and Pokemon Center Mega Tokyo.

Let's first go directly to the Sky Circus Sunshine 60 Observatory on the 60th floor of the Sunshine 60 Bldg. The observation deck is designed to provide "an experience you can feel". Not only can you enjoy a 360-degree panoramic view from 251 meters above sea level, but you can also enjoy a completely new view experience that stimulates the sensations of touch, feeling, and surprise. 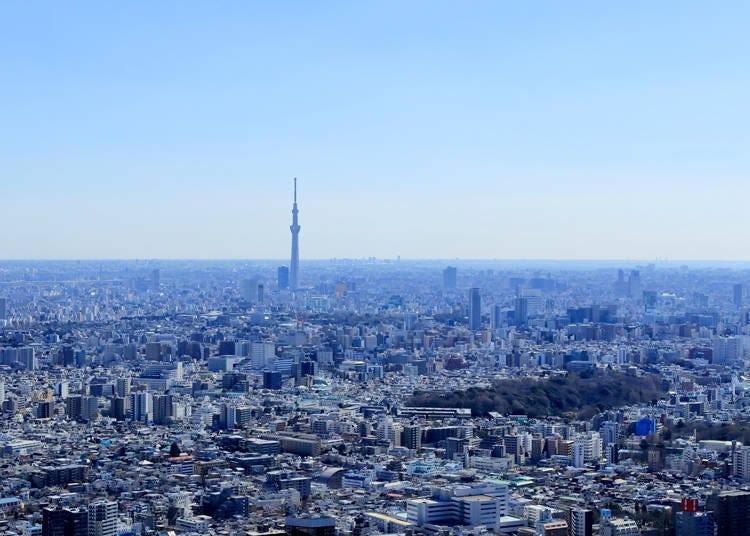 This is more than just your run-of-the-mill observatory. In the Sky Hall there are giant monitors embedded in the floor that make it seem they are glass sections enabling views of what lies below the floor. Other highlights are the Sky Trampoline that enables you to jump around famous locations in Japan, optical illusions in Wonder Mirrors, the kaleidoscopic world of Infinitescape, and Fortune Window that holds unexpected surprises when it becomes night. 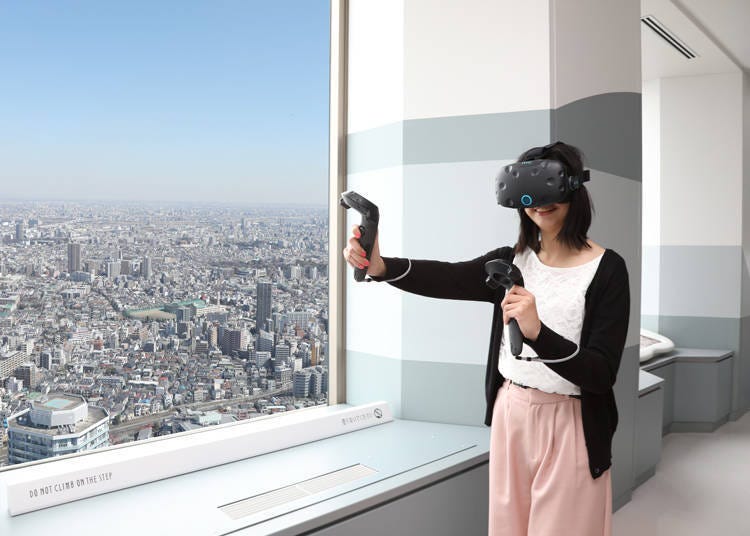 When you are here you really must try the Virtual Reality experiences. There's one crazy activity in particular that I recommend, and that's the Human Cannon! It gives you the sensation of being shot like a human cannonball across the sky giving you a view of what Tokyo might look like in the future.

There's also a Swing Coaster that gives you a bird's-eye view of Ikebukuro as you swing. In Sky Escape hostiles attack the roof of a tall building from the sky. The Ultra Reverse Bungee Jump simulates a lunge from a giant steel tower, while Tyrannosaurus Rex and other dinosaurs emerge from land, sea, and air before your very eyes.

Welcome to the future! 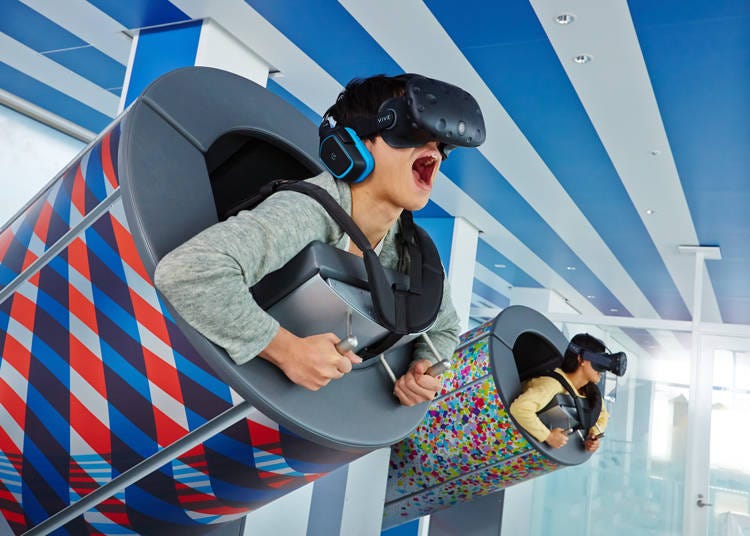 Sunshine Aquarium: Where penguins swim in the urban sky

The Sunshine Aquarium is one of the major attractions of Sunshine City. This consists of the Ocean Journey on the first floor that houses ocean animals, the Waterfront Journey on the second floor that exhibits animals that live in lakes and rivers, while outside there is the Sky Journey marine garden that features aquatic animals. 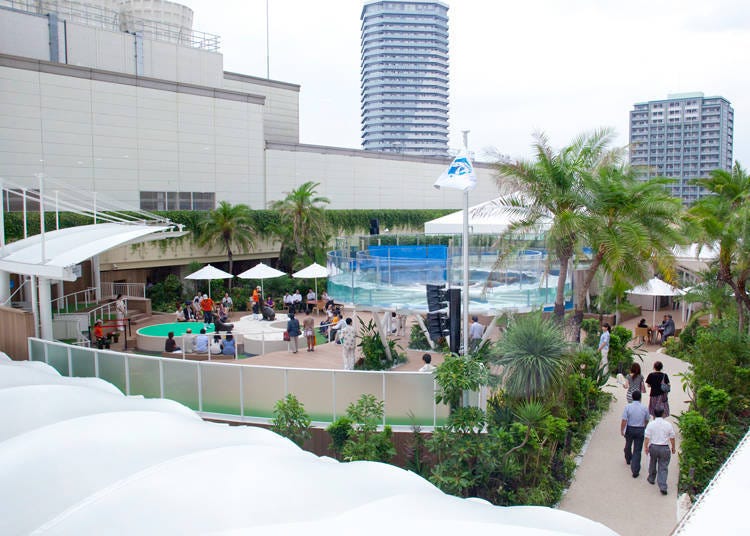 In the Sunshine Lagoon, a large aquarium holding about 240 tons of water on the first floor, you can see all types of fish living in habitat designed to resemble a shallow-water coral reef. Also, depending on the time, divers will swim with the fish and using underwater microphones explain the ecology of the fish. 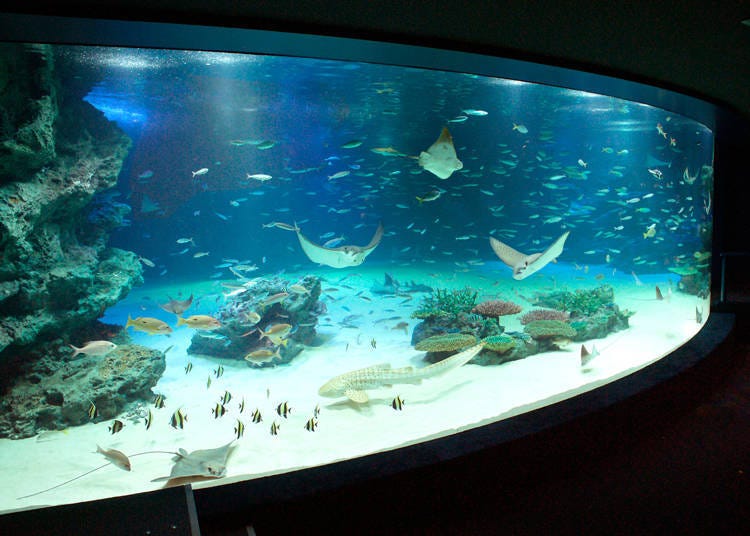 The outdoor marine garden is the most popular part of the aquarium. As you enter you will see overhead Penguins in the Sky, a 12-meter wide tank with a transparent bottom in which the animals swim freely.

Outside is the Sunshine Aqua Ring, a donut-shaped pool about 8 meters in diameter that houses playful seals and other animals. Seeing penguins as though they are swimming in the sky above you is indeed an impressive sight. Great white pelicans also swim in the Sky Penguin tank during performance time, so be sure not to miss it. 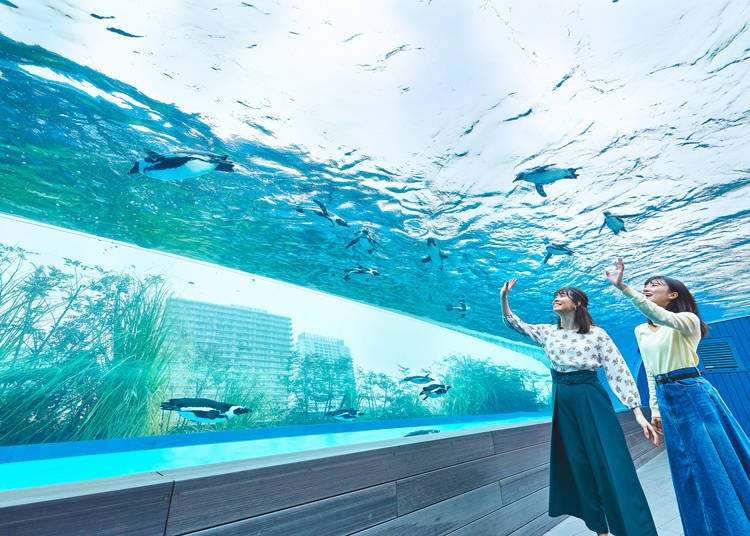 Namjatown consists of three “towns”. These are the Dokkingham Plaza, a fantasy-like cityscape straight out of a storybook, Fukubukuro 7-chome Shopping Street that is modeled on a Japanese town as it looked in the 1950s, and the Mononoke Unnumbered Plot, an area haunted by ghosts.

Other attractions are the Bluebird of Happiness in which you raise your own bluebird; the Namja Detective Team in which you are a detective trying to solve mysterious incidents in the town; and Mononoke Hunters in which you try to capture unidentified ghosts.

MAZARIA: immerse yourself in the world of animation and games

In MAZARIA you can interact with humans and game and anime characters in a world between the three-dimensional with the two-dimensional.

Here there are 19 different activities that allow you to enter the various anime and game worlds where you can play in another dimension. VR activities include Mario Kart Arcade Grand Prix VR, Gundam VR Diva Assault, and Evangelion VR The Soul's Seat: Runaway.

Konica Minolta Planetarium Manten, on the roof of the World Import Mart Building, is a popular spot where you can enjoy the starry sky in the middle of this sprawling metropolis.

A new screen dome was added when the planetarium was renovated in 2015 and at that time Infinium Σ, the most advanced planetarium of that time, was introduced. These add such detailed realism to the views that you would think you were actually sitting underneath the bright starry sky.

The theme here is “Liberation of the Senses”. There are two relaxing ways to enjoy the views of the heavens, either lying on a Lawn Seat or on a soft, fluffy Cloud Seat. 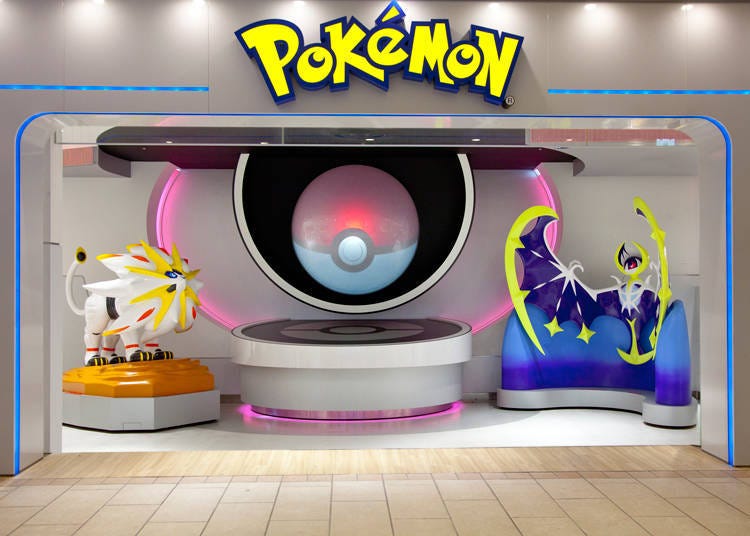 Regardless of whether it is a weekday or holiday, Pokemon fans, young and old alike, flock to the Pokemon Center Mega Tokyo located on the 2nd floor of Sunshine City to come face to face with Pokemon monsters that are popular all over the world.

In the official shop you'll find a large selection of original products, game software and card games, as well as services and campaigns to delight Pokemon fans.

For Pokemon fans, this place is like a dream come true with all the goods, toys, food, games, and other unique items available.

So much more to explore!

What we have introduced so far is but a fraction of the many things to see in Ikebukuro and Sunshine City. All the essential functions needed for life in a large metropolis are gathered here in one place and include, among others, two shopping malls, the Specialty Store Alpa and Sunshine City Alta; the Sunshine City Prince Hotel; cultural facilities such as the Sunshine Geikijo and Ancient Orient Museum in the Bunka Kaikan Building; and public facilities such as parking areas and a bus terminal. 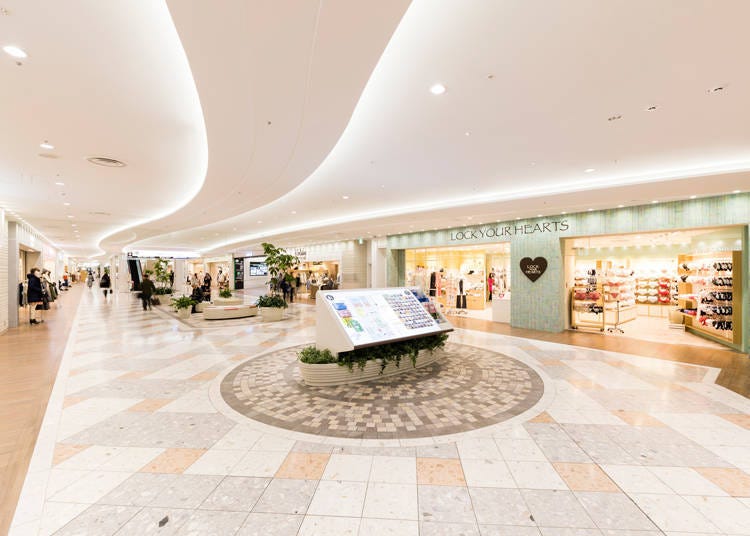 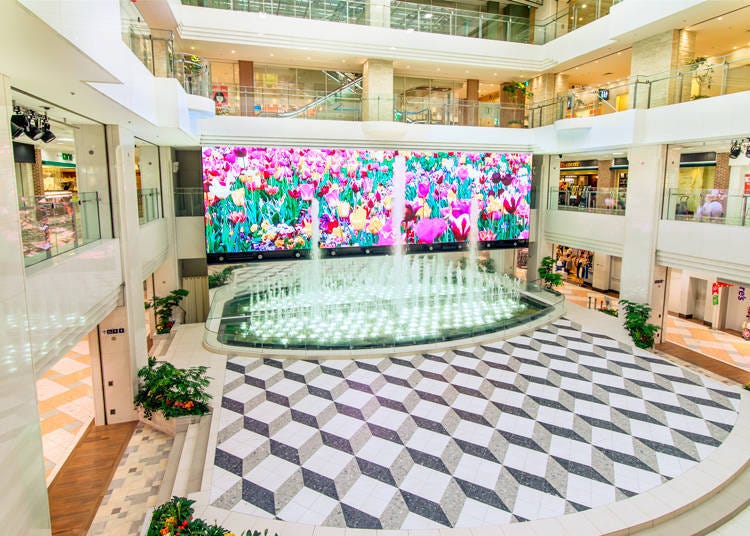 All of these are to be found in the Sunshine City amusement center. You’ll probably need more than one day to see everything, so plan on coming more than once.