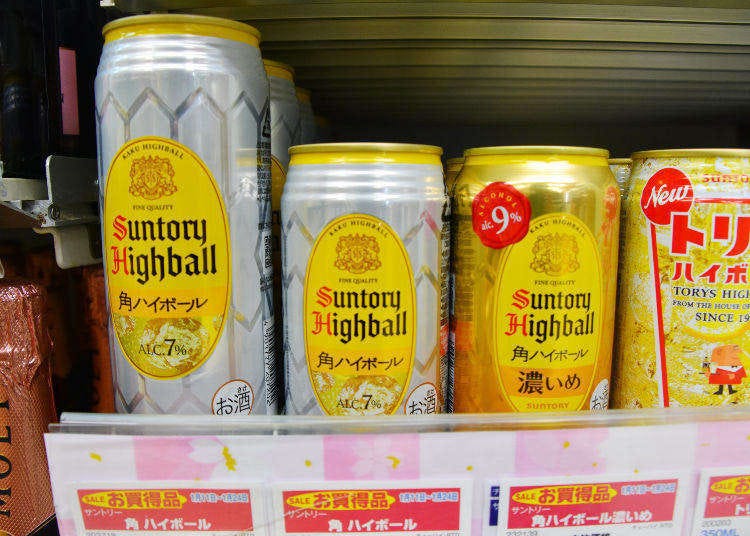 Founded in 1921, Kakuyasu liquor store is known domestically as the place for all your alcohol needs. Its most striking feature is that it has a wide selection of liquor (beer, wine, shochu, etc.) and snacks, all offered at affordable prices.

In addition to direct sale stores in approximately 180 locations, Kakuyasu also has commercial distribution centers, distribution specialized bases, and wholesale sales to small-scale restaurants and individuals. While it is positioned like a convenience store specializing in alcohol, the ability to purchase alcohol at a cheaper price than a convenience store is probably a major reason that the people in the town love this store.

This time, LIVE JAPAN interviewed the company as they selected 12 popular Japanese alcohols to take home as unique Japanese souvenirs! 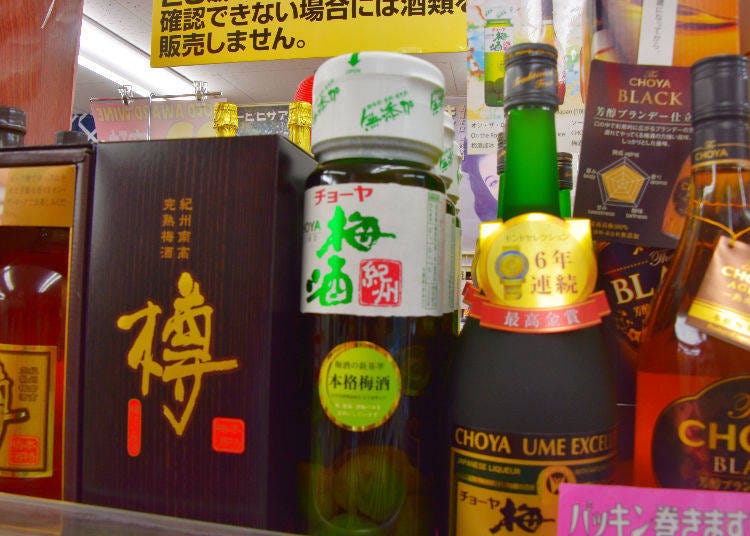 Umeshu is a traditional Japanese liquor. It is a fruit liquor made by using "ume" (plums), a fruit which has long been associated with Japanese food culture. Choya Umeshu Kishu (720 ml) is the representative drink for the Choya brand, the first major one to begin manufacturing and selling plum liquor in Japan. The acidity and sweetness of the fruit harmonize well in this liquor. Umeshu is characterized as being easy to drink, whether you drink it chilled, straight, on the rocks, or parted with soda. This selection is a gem that attracts popularity from a wide range of people from Japanese men and women in their 20s as well as foreigners and is our recommendation to people who want to give plum wine a try. Currently, in Japan, there is a rule for plum liquor that is based on the traditional manufacturing method* (a.k.a. "Authentic plum wine") and Choya Umeshu Kishu (720 ml) has more than cleared this standard as it is not plum-flavored but uses real plums in its product.


(* Process using only plums, sugars and liquors as ingredients, without acidulants, colorings and fragrances) 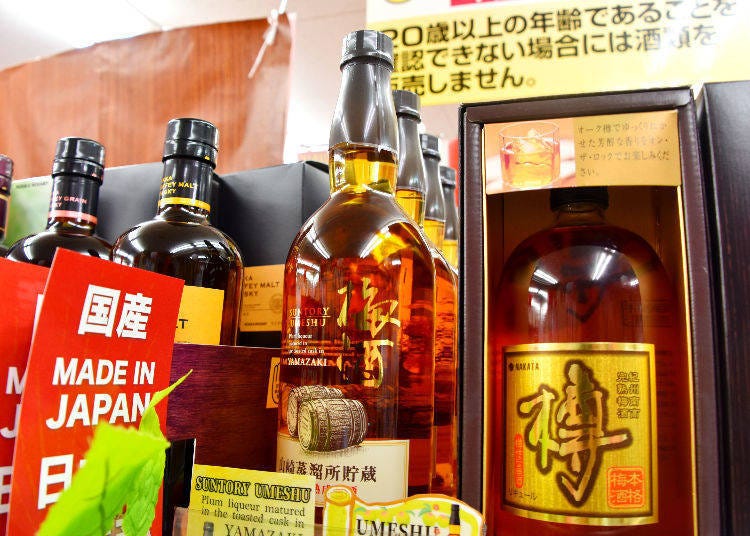 Suntory Umeshu (aged in Yamazaki cask) 750ml, comes from Suntory, one of Japan's leading soft drink and brewery brands. The biggest feature of this drink is in the manufacturing method. Here aged barrels from Yamazaki distillery – which had been used for storing whisky - are toasted and used to ripen plum wine slowly in the barrel. This produces a fragrant aftertaste. If you take a sip, the deep taste and fragrant aroma of vanilla spread throughout your senses. This product is recommended for those who like whiskey and those who like plum wine. In particular, there is strong support from men in their 30s or older. 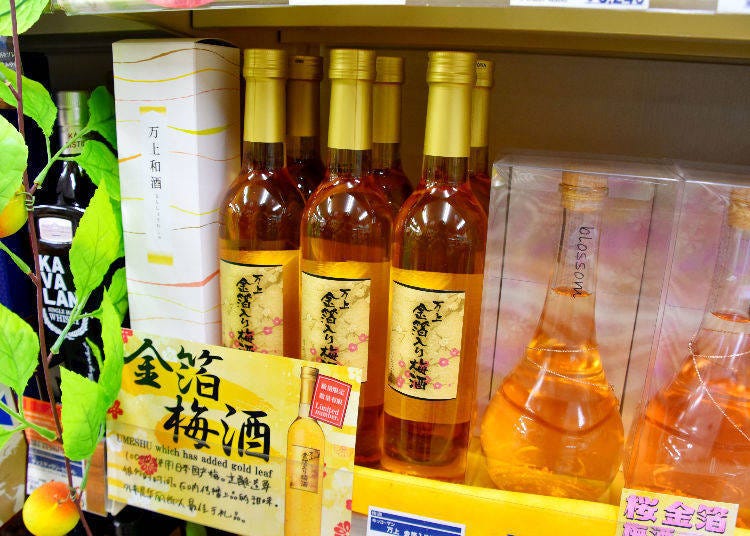 Kikkoman, a major manufacturer of seasonings, namely soy sauce, also produces the plum liquor Banjo Gold Leaf Plum Wine (500 ml). It uses 100% domestic plums and its distinguishing feature is its detailed process of creation. When poured into a glass, the gold leaves give the color of this drink a sense of luxury. On every sip, you can enjoy a refreshing flavor that is both sweet and elegant. Because of its use of extravagant gold leaves, it looks gorgeous, and fresh when poured into a glass. This product brings you the best of Japan and is suitable as a gift or souvenir. It is especially popular among men and women in their 20s. 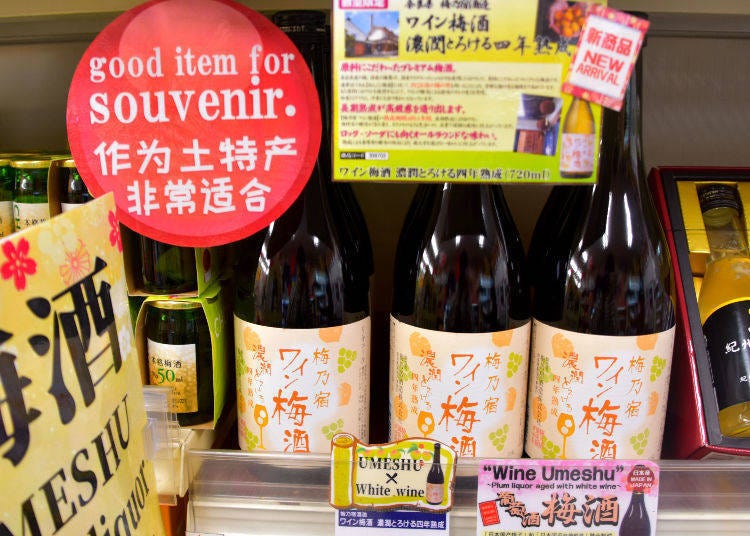 Umenoyado is a sake brewery with a history of over 120 years. Among the company's plum wine brands, one of the most popular is Umenoyado aged plum wine (720ml). It uses plums from Wakayama and Nara Prefectures. It is surprising how much of the actual plum is used. Compared with other products of the company, it uses approximately three times the amount of plums, creating a rich plum flavor. The fruit juice of such a plum is combined with Chardonnay from a Japanese winery, and then aged for four years. This time it takes to age allows this product to achieve a profound and premium taste. 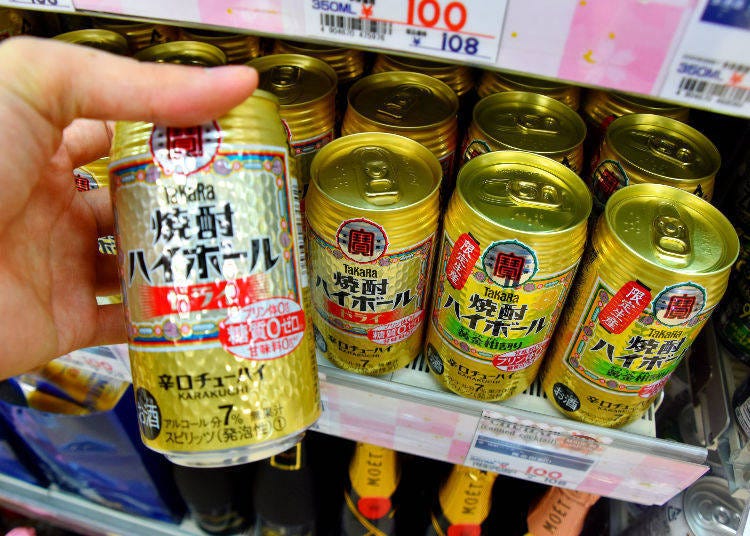 Takara Shochu Highball Dry (350 ml) is a standard product from Japanese brewer Takara Shuzo. In Japan, a cocktail based on shochu (distilled liquor made from ingredients such as rice, wheat and sweet potato) or vodka is called shochu highball (Chu-hi). This product resembles “a whiskey soda”, which is popular in Japanese izakaya pubs. It is achieved by parting liquor with soda water (the liquor for this drink is shochu) and has an alcohol content of 7% and is characterized as being carbonated, crispy, and refreshing, with a dry aftertaste. This choice is particularly popular among Japanese men in their 40s and above. 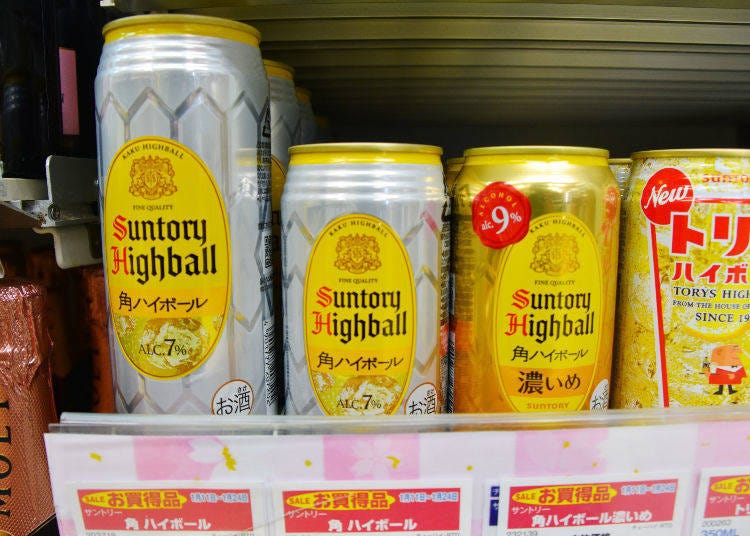 A highball is a drink made by parting whiskey with soda water. The whisky that is used for this product is based with this company's long-time seller whisky brand, Suntory Kaku. Canned Kaku Highball (350 ml) is where the Kaku whisky is parted with soda water; it is characterized by its thick and a dry finish. It is one of the most famous highballs in Japan and is highly popular regardless of age or gender. 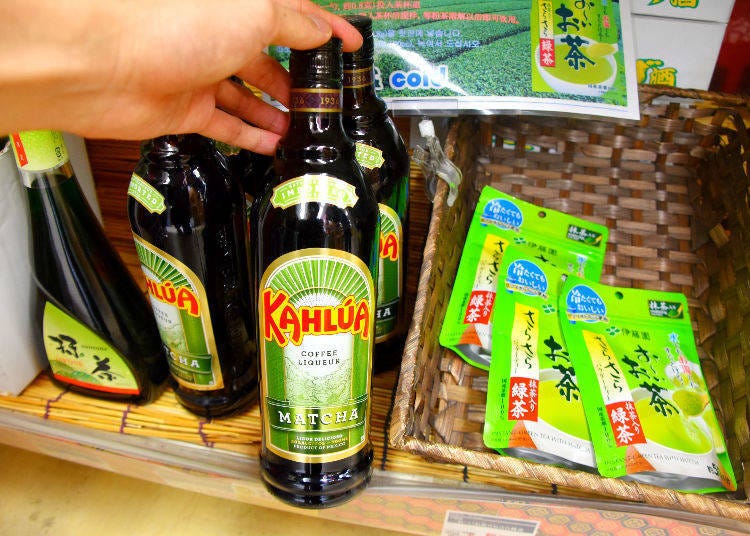 Kahlua Matcha (700ml) is a combination of Kahlua, a mixture of coffee and sugar cane, and matcha, Japanese green tea, making this product a mixed drink (liqueur). It is good to mix this with cold milk for a nice cocktail. This can also be enjoyed with brandy and milk. It is a product that brings out the deep aroma of matcha with the sweet and rich taste unique to Kahlua. 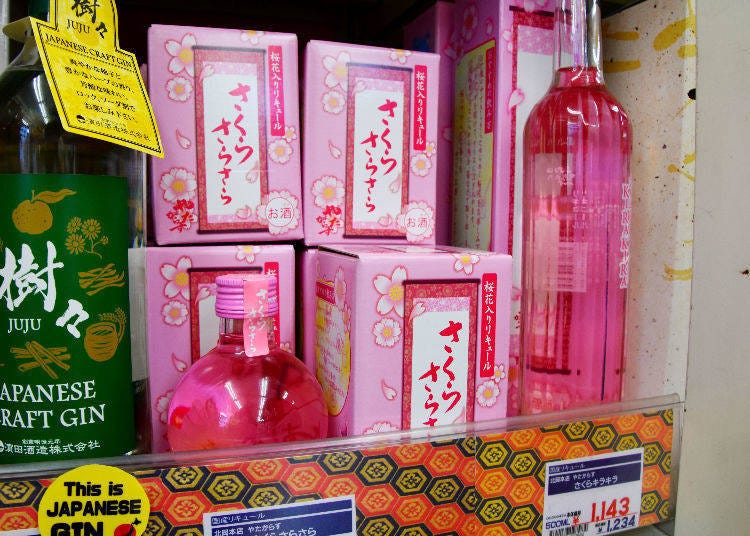 Sakura Sara Sara Liqueur (180 ml) from Nara Prefecture brewery Kitaoka-Honten is a sweet and sour cherry liqueur packed with "Sakura" symbolizing Japan's spring. There is a light cherry aroma that can be enjoyed in a variety of drinks, such as straight, on the rocks, or parted with soda. The cherry blossoms are edible, so consuming the leaves are okay, and the bottle with its cute design and perfume-like style can also serve as a pleasing wedding gift. 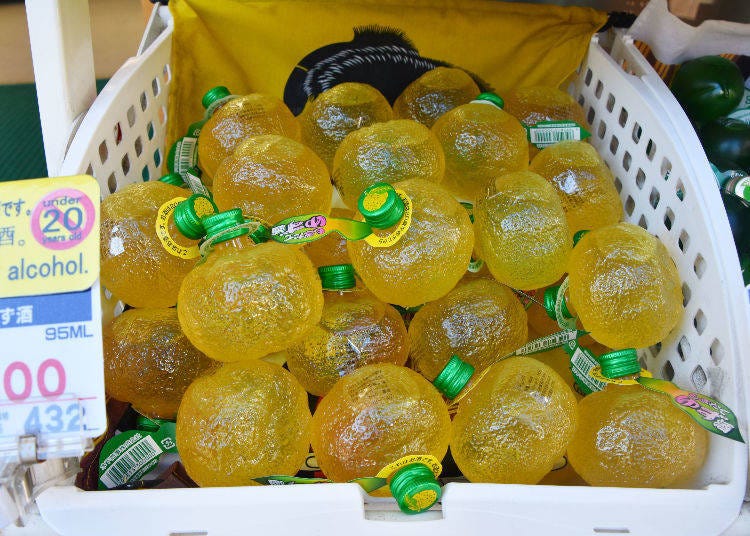 Chateau Sakaori is a company that owns a winery in Yamanashi Prefecture, an area known as one of Japan’s key wine producing regions. One of the company's products in its Hitokuchi Series line of liqueur called Mogitate Yuzushu (95 ml). The containers are in the shape of the yuzu citrus fruit and make for perfect souvenirs. This is a cute liqueur that is easy to drink at 14% alcohol, using fresh, rich, and original sake. 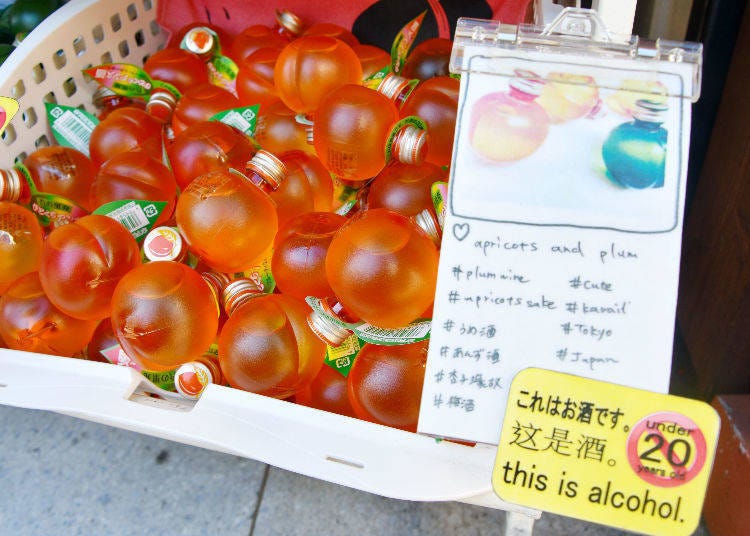 In Japan, apricots and plums are used as a raw ingredient for jams, as well as for creating liqueur. The full-blown fruity aroma and sweetness of the fruit entice the senses immediately after drinking it which may be contrary to its cute palm-sized appearance. The alcohol content is 12%, and can be enjoyed on the rocks, parted with soda or straight. It is also a nice decoration for any room even after drinking. 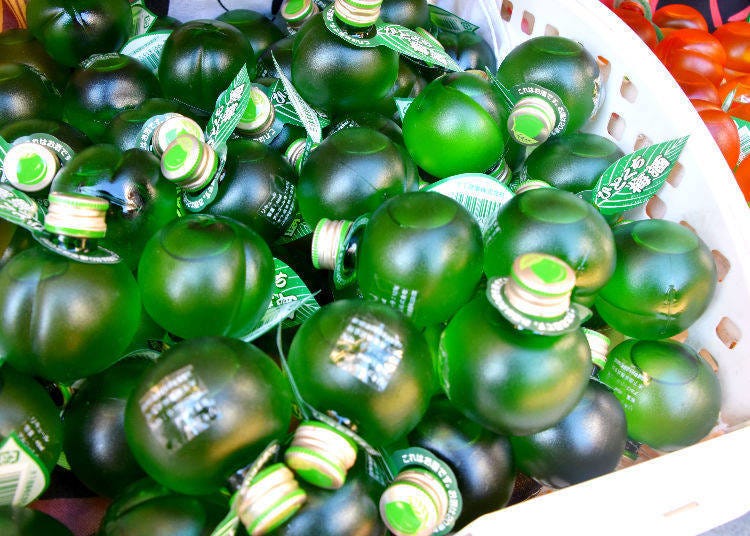 “A traditional Chinese herbal medicine is their plum wine.” A product that passed down from ancient times to making plum wine made by Chateau Sakaori Winery. The alcohol content is 12%. It is easy to drink because of the acidity and clean taste that spreads through the mouth and is a pleasant product as it can be preserved even after it is opened. Furthermore, because of its plastic container it is safe to carry and can be a transferable item. The Hitokuchi series is particularly popular among women in their 20s. 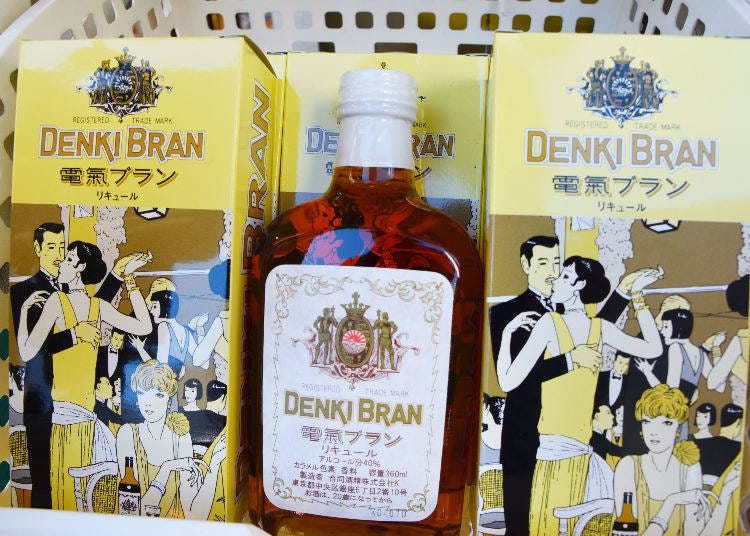 Denki Bran 40° (360 ml) is a hit product by the Oenon Group, which develops products for alcoholic beverages plus pharmaceutical companies. Denki Bran is a cocktail that is based with brandy and is mixed with gin, wine, and medicinal herbs based with a history of over 100 years in Asakusa, Tokyo. The secret blend that has been handed down from 1826 is also called "the cocktail of dreams" and is characterized by a sharp bite (it’s 40% alcohol) and texture that can be felt with a faint sweetness. It can be enjoyed many ways such as chilled, straight, or by parting with soda water. 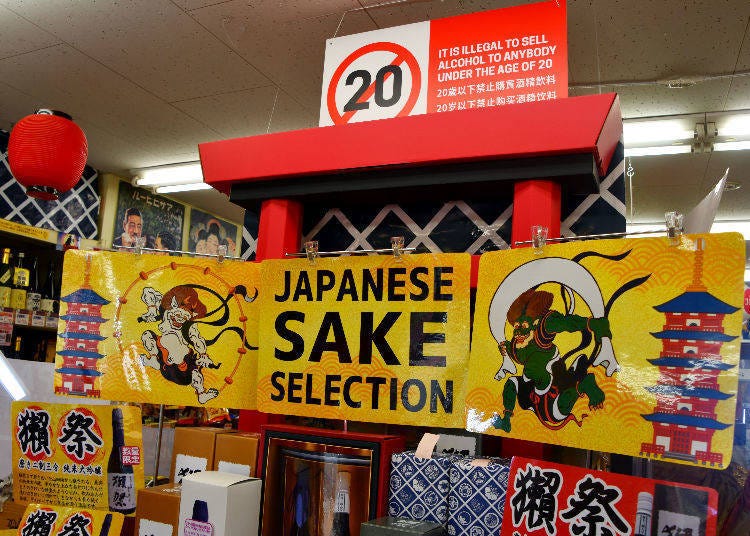 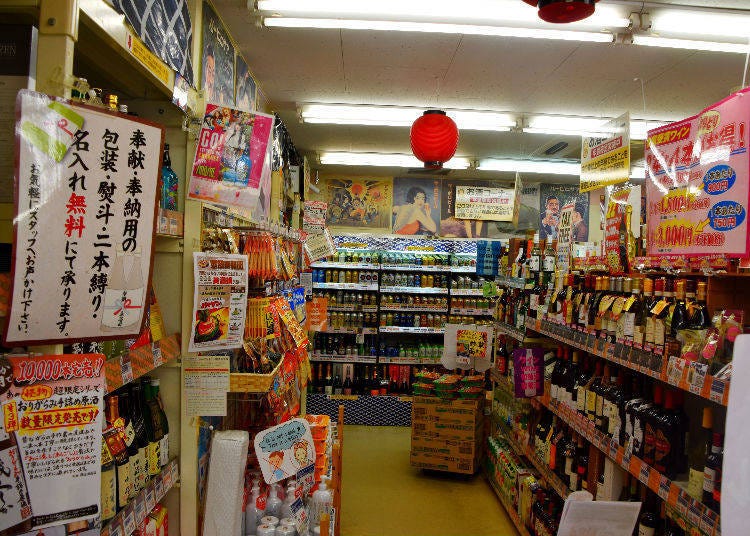 *In Japan, drinking is prohibited under the age of 20 by law. When purchasing alcohol, present a valid ID.
*All the products introduced in this article are from the time of coverage at Kakuyasu Liquor Store, Asakusa branch. Prices may vary.
*Item availability may vary by store