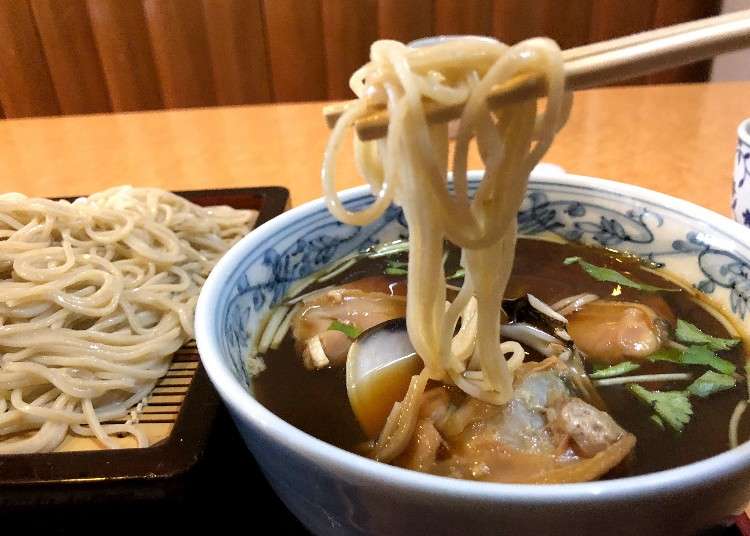 Soba is a noodle dish in which the noodles are made with the flour of the ground seeds of buckwheat, an annual plant. Since ancient times in Japan buckwheat flour was kneaded and eaten uncut, but after time the custom of slicing the dough into thin noodles came about.

Eventually they took the forms as we know them today. It is also considered to be an auspicious food, and in Japan the custom of eating it at certain junctures in life, such as when moving or at the end of the year, is well-known. Soba is imbued with symbolic meanings. Compared to other noodles, it is easy to cut and as such it symbolizes the "severing" of misfortune while the long, thin noodles symbolize longevity.

So it's fitting to enjoy such a delicious, auspicious dish in Tokyo's historical district of Asakusa!

Why was soba so highly prized in Asakusa, the home territory of the Edo Shogunate?

Above all, the soba culture developed greatly during the Edo period of Japan (1603-1868). Soba that was eaten on the streets of Edo by busy merchants hungry for a quick, filling meal was called “Edo Soba”. The soba that was made from buckwheat seeds gathered between summer and autumn was called “new soba” and was highly prized among Edo merchants.

To this day there are still many soba restaurants in Tokyo’s Asakusa district attesting to this rich vestige of Edo culture. Not only are there long-established shops reminding us of that Edo culture, but there are also many shops offering soba in ways uniquely adapted newer times. Join as we introduce three stellar shops! 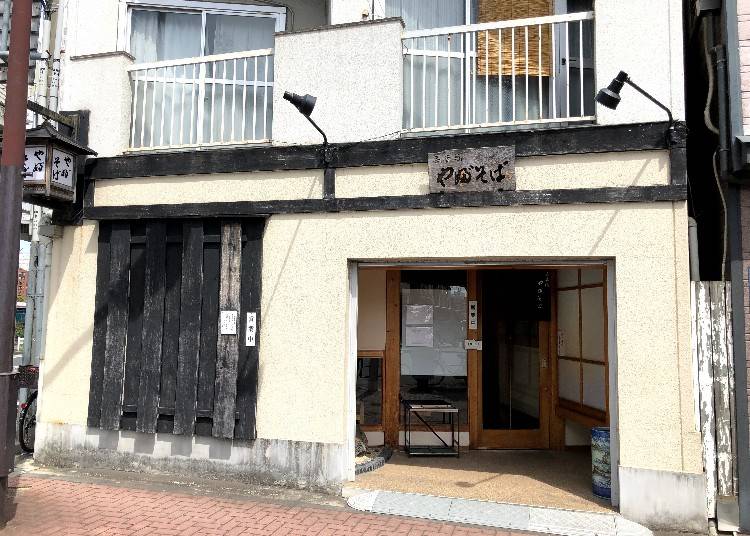 There are three branches of Japanese soba extending from the Edo period. The "three major branches" are called Yabu Soba, Sarashina Soba, and Sunaba Soba, and the Azumabashi Yabu Soba, as its name implies, traces its roots back to Yabu Soba. The shopkeepers are trained at Kanda Yabu Soba, a famous Japanese soba restaurant established in 1880. 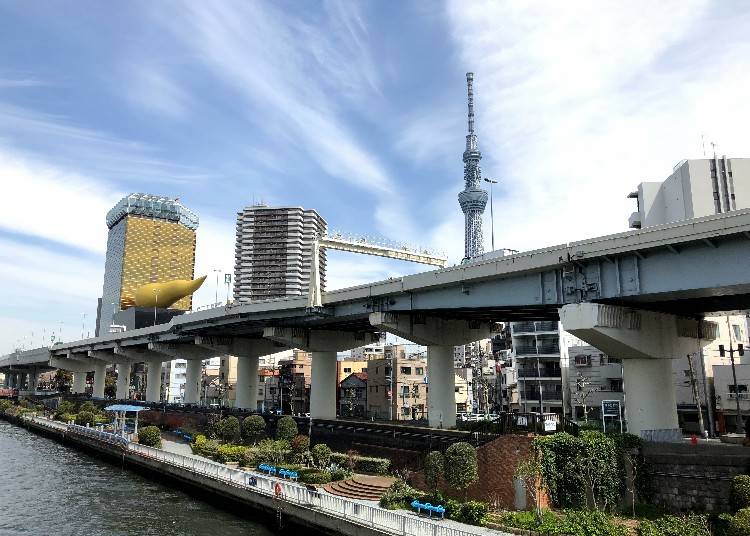 Caption: You can see Tokyo Sky Tree when you walk along Komagata Bridge. The gold-colored object you see in the distance is the symbol on the Asahi Beer Building symbolizing the “Flame of the Sacred Stand”. 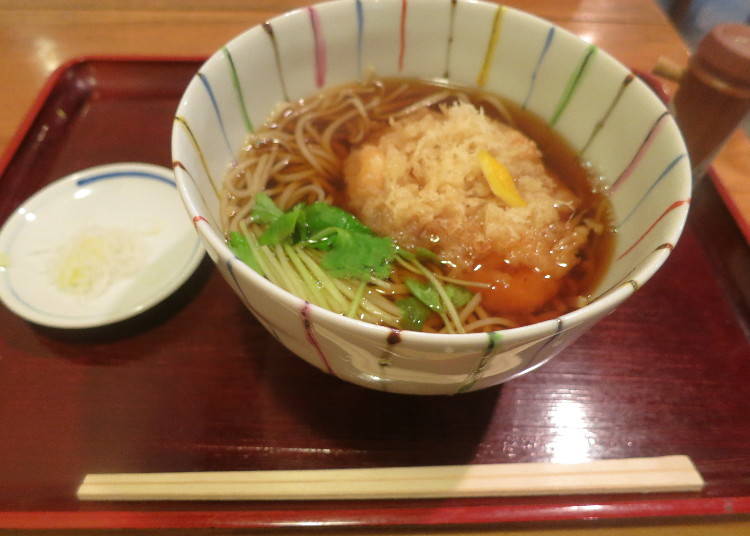 We tried the Tempura Soba with the kakiage. Normally it is served in hot soup, but it is also possible to order a chilled version. The kakiage is kept simple with just Shiba shrimp and the deep-fried batter exterior is light and crisp. When the kakiage, hot out of the fryer, is placed on the dish it makes a sizzling sound as it absorbs the soup. The name Shiba Ebi is named after the shrimp that in Edo times was caught in Shibaura, the name of the inlet near Shiba, and which is known for being a main ingredient in Edo-style tempura. Shiba shrimp are small and plump so when several are dipped in batter and fried together when making kakiage.

Soba is made by the shopkeeper every morning in a room for that purpose in the shop. The soba has an excellent and pleasant texture. The fried kakiage is not at all greasy and goes deliciously well with the slightly sweet soy sauce based tsuyu. It is also accented with a bit of yuzu shavings on top. 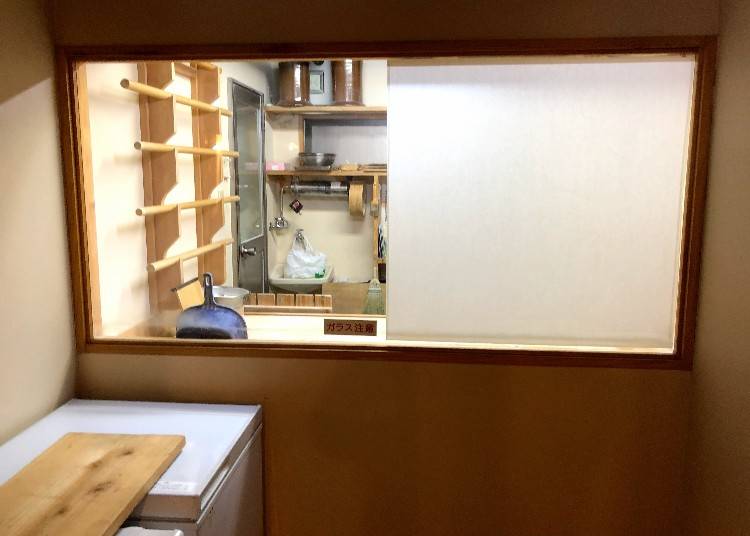 Caption: The room beyond the glass partition is where the soba is made.

This shop is noted for its rich menu offering 15 different types of soba. It is especially noted for its dishes that contain sticky ingredients, which many foreign visitors often find difficult to eat, such as cold Natto Soba (1,100 yen), Nameko Soba (2,200 yen), and Yamakake [grated Japanese yam] Soba in addition to hot soba dishes. The shop also has a wide selection of snacks that go well with sake, which is also available from noon.

2. Benten: Enjoy soba in a long-established restaurant that retains the atmosphere of the Asakusa Geisha quarter 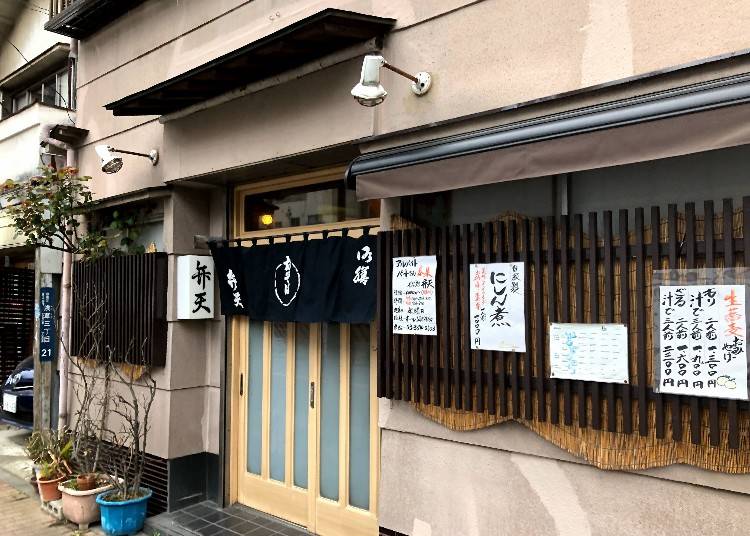 Benten, its shop located in a back street of Asakusa, was established in 1950. This area is called "Asakusa Hanamachi [Flower Town]", a euphemism for the red-light district, and it has prospered as an entertainment district where "Geisha houses" and restaurants have lined the streets since the middle of the Edo period. A Geisha house is an establishment that dispatches "Geisha" who dance and play musical instruments at drinking parties. One such establishment, Asakusa Kenban, across the street, still continues to dispatch Geisha. 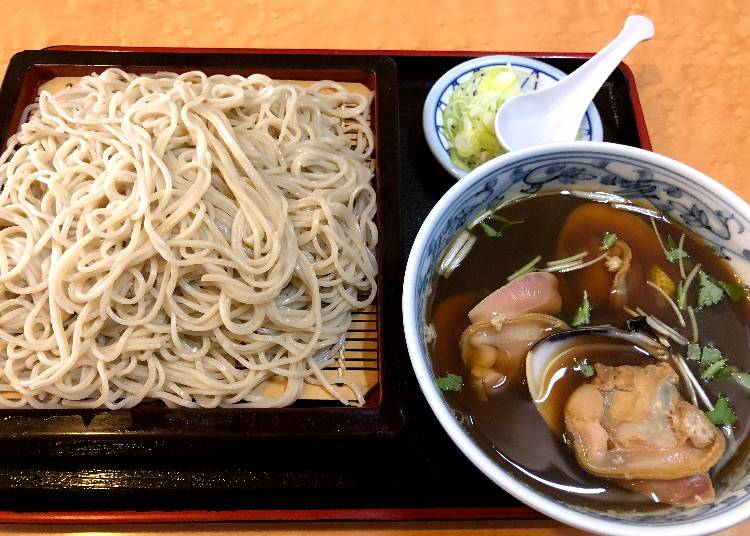 Benten has a seasonal menus offering a wide selection for each season. This is a tradition that has been handed down through generations. Among them, the Hamaguri Seiro, a spring specialty containing large, plump clams served tsukesoba-style in a hot broth, is famous here. This had been a dish only offered in spring during the long clam season, however, because it is so popular it is now served year-round. By the way, other dishes limited to the seasons are Matsutake Soba, using domestic matsutake mushrooms in autumn and Kaki Nanban Soba, containing oysters, in winter. 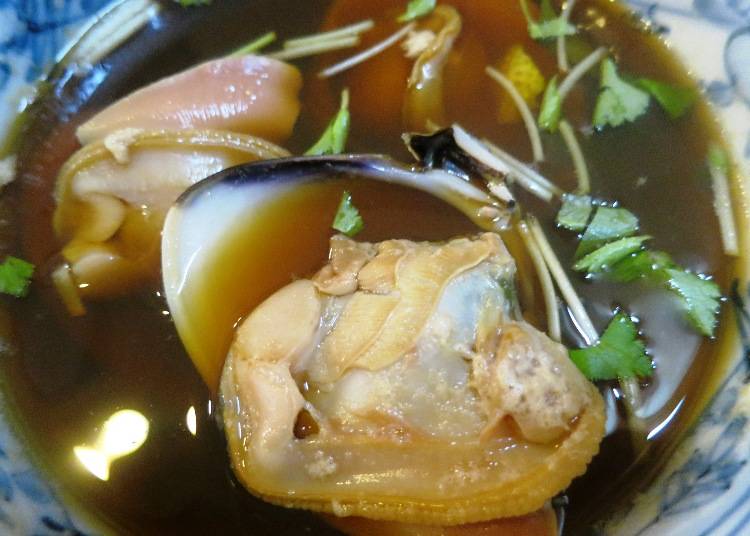 The Hamaguri Seiro contains four large clams. The clams are a product of Chiba. They are easy to eat because the meat has already been removed from the shell. The broth from the clams perfectly fits the tsuyu [noodle soup base] giving the noodles dipped in it a clam flavor. Soba noodles that mix well with the tsuyu are made with 3 parts wheat flour and 7 parts buckwheat flour. The shop uses domestic buckwheat flour. Incidentally, the dried bonito shavings used for the tsuyu are freshly made at the shop.

Another major feature here is that the tsuyu used for mori soba and zaru soba are different. Both are chilled soba served on bamboo-latticed trays. Many soba shops in Japan serve both chilled types of soba without the same ingredients. Although there are various theories, in most soba shops, usually zaru is topped with nori, whereas that without any topping is called mori. The tsuyu for mori has a straight bonito flavor, and at Benten, kaeshi, which is a blend of soy sauce, mirin [sweet sake], and sugar, is added to the mori tsuyu to make the zaru tsuyu which has a bolder flavor. You might enjoy comparing the difference. 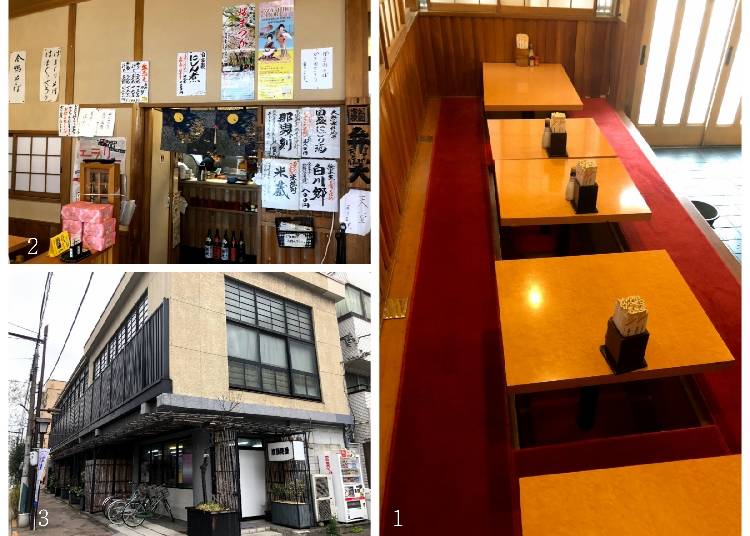 Caption: 1. The interior is not that spacious, but there is seating for 14 in a tatami section with recessed areas for feet. 2. The paper on which the recommended menu is written is very tasteful. 3. This is the Asakusa Kenban on the other side of the street. Please note that the general public is not allowed to enter it. 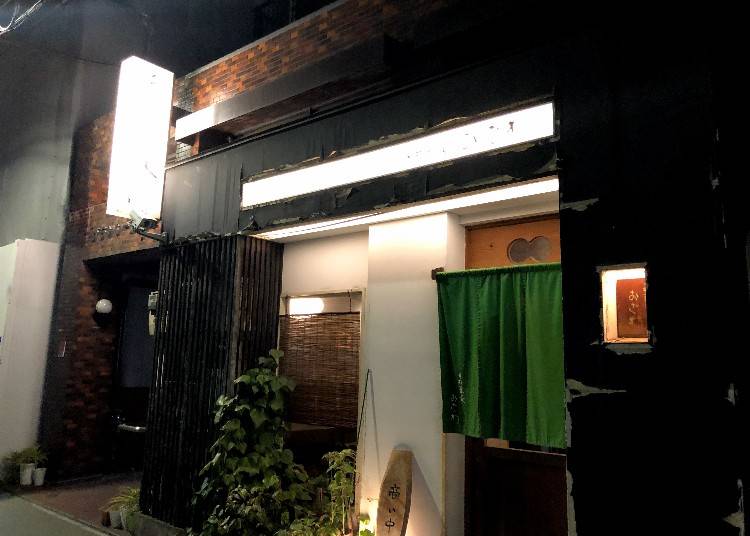 Ozawa is the third shop offering handmade soba noodles on our list. Established in 1999 in Inaricho near Asakusa, it moved to its current location on the road behind Kokusai-dori in Asakusa. This shop is famous for its Futouchi Zaru, which probably surprises Japanese accustomed to normal-sized noodles more than it does foreigners. These noodles are many times thicker than standard-sized noodles and are chewier. 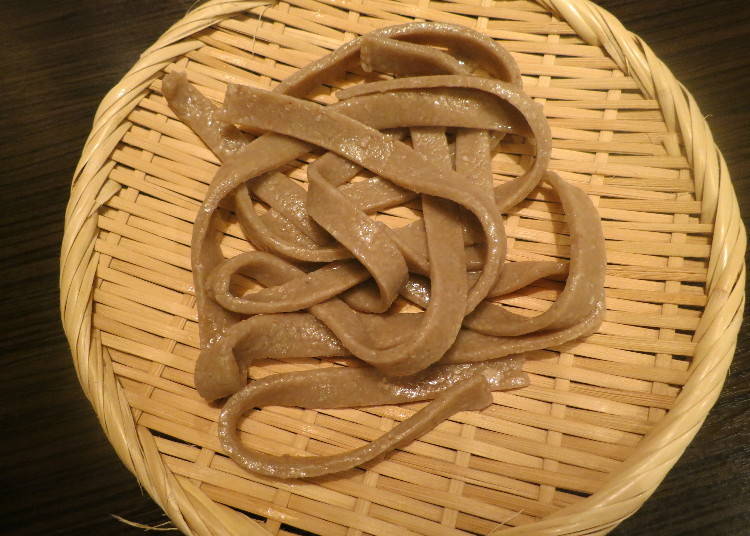 Caption: Futouchi Zaru at Ozawa. It seems that in the old days, soba consisted of just one, long noodle strand. 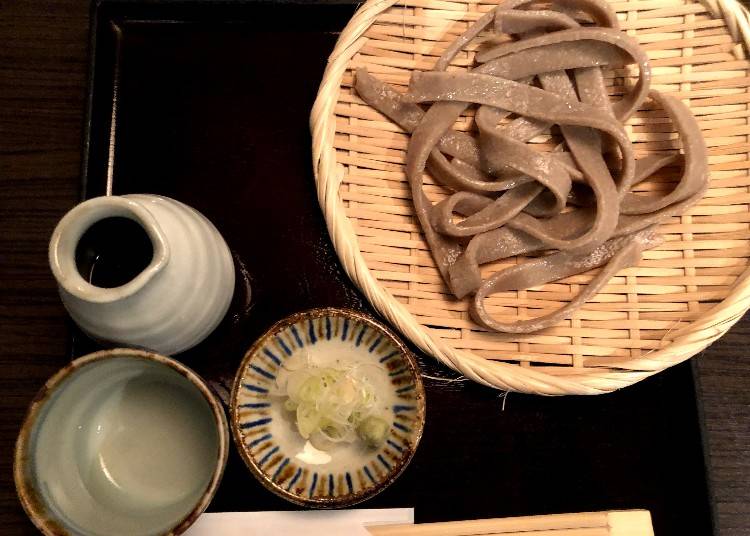 So how did these thick soba noodles come about? According to the shopkeeper, when the shop was located in Inaricho, there was a regular customer who preferred thick noodles and always requested “fatter” noodles. It was in compliance with his request that this size was created. Both the flavor and the sound of slurping the noodles are essential to the way soba is normally eaten and natural to Japanese. These thick noodles have a springy texture and are chewed one at a time. Eating them in this way delivers the full flavor of the buckwheat and gives the satisfying sensation of “eating soba”. It may not look like a large portion, but it is equivalent to an extra-large portion of normal soba. 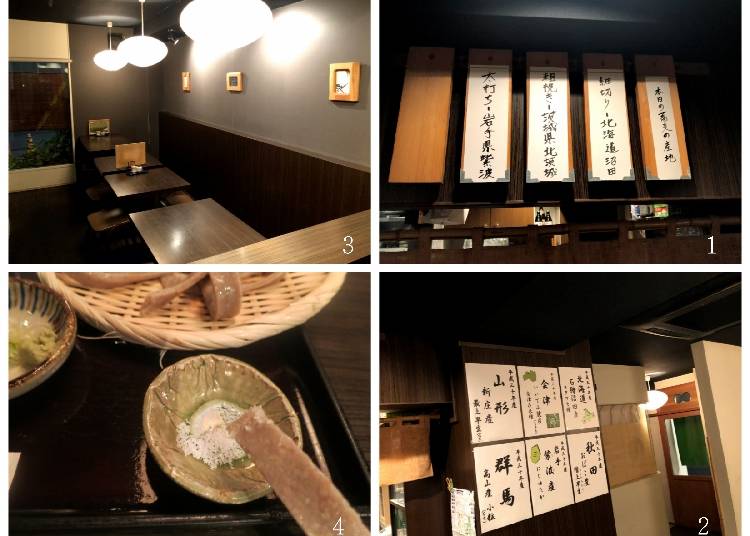 Caption: 1. Notices advertising the three different types of buckwheat production areas. 2. These areas also produce buckwheat flour for Ozawa. The wall is plastered with notices. 3. There is no counter seating, but only tables where you can leisurely enjoy meals. 4. If you request salt the waiter will gladly provide it. Dipping the noodles in salt instead of tsuyu is also good. 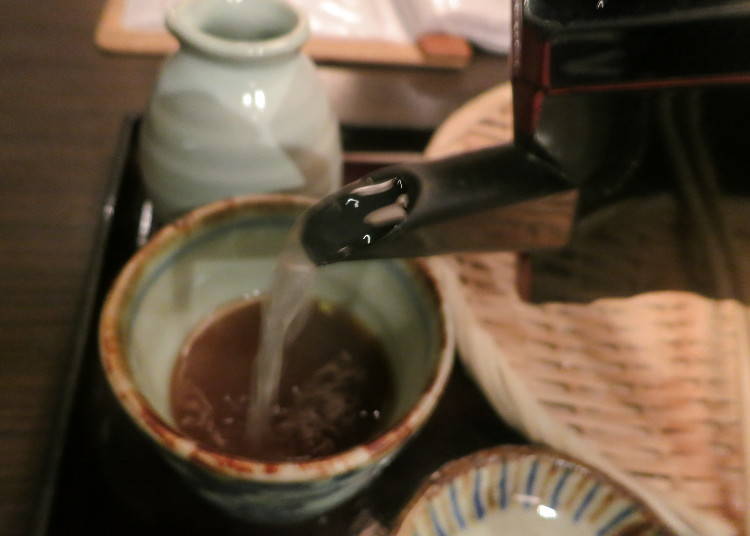 One more thing: the tsuyu that comes with chilled soba is too salty to drink straight. So normally sobayu [hot water in which the soba was boiled] is added to it. This is something you should definitely try after you have eaten the soba. Almost all soba shops in Japan proffer sobayu after you have eaten the noodles. This is provided at no extra charge as a service, so be sure to try it.