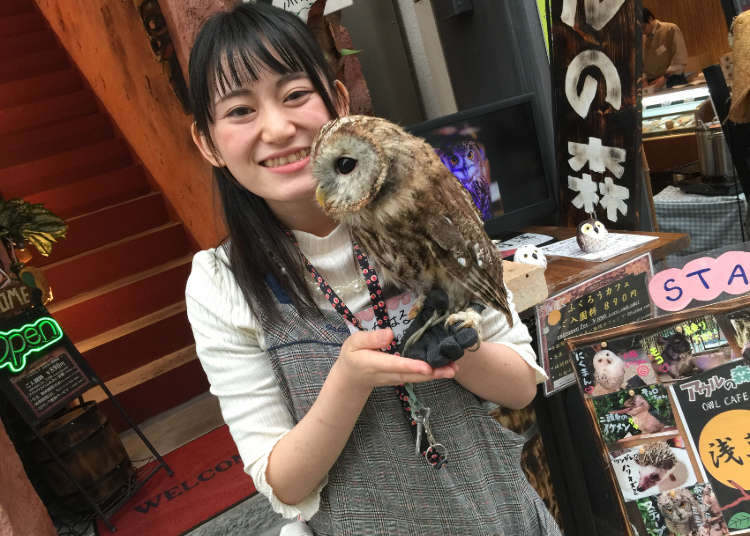 How would you like to visit unique cafe in the heart of Asakusa? A charming jungle forest full of feathery friends await you at Owl no Mori! This “Forest of Owls” is home to 30 owls of 17 different breeds, both big and small, as well as a few other animals. LIVE JAPAN stopped by the cafe for a visit with creatures, both feathery and furry! 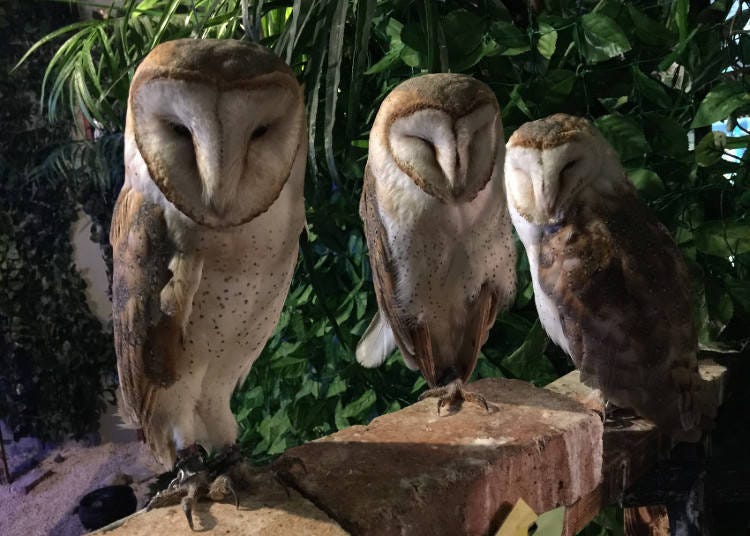 If the idea of an owl cafe leaves you scratching your head, you have to consider the concept of the "animal cafe." Animal cafes have been a trend for some time now in Japan. Tokyo in particular is home to a number of cat cafes, and others such as bunny, or even snake cafes, have sprung up in recent years. Why is this? Well, I can’t say for certain, but I suspect it has a lot to do with the limited space in the city. 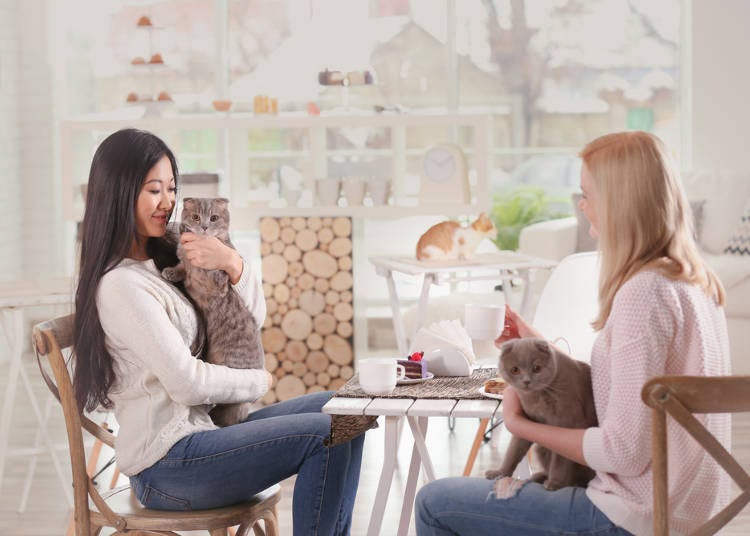 Unlike living in the countryside, or even the suburbs, relatively few people dwelling in large cities live in a detached house of their own. Instead, many people live in apartments or places similar to condominiums (confusingly, these are called ‘mansion’ in Japanese!). In these types of living quarters, pets are usually prohibited. However, there are still plenty of people who long for a pet of their own. Thus, the concept of the cat cafe was born. And while the first cat cafe is credited as opening in Taiwan, many would say that it was Japan that took the concept and ran with it. As of 2016, over 50 cat cafes can be found in Tokyo alone.

Along Come the Owl Cafes...Visiting Owl no Mori 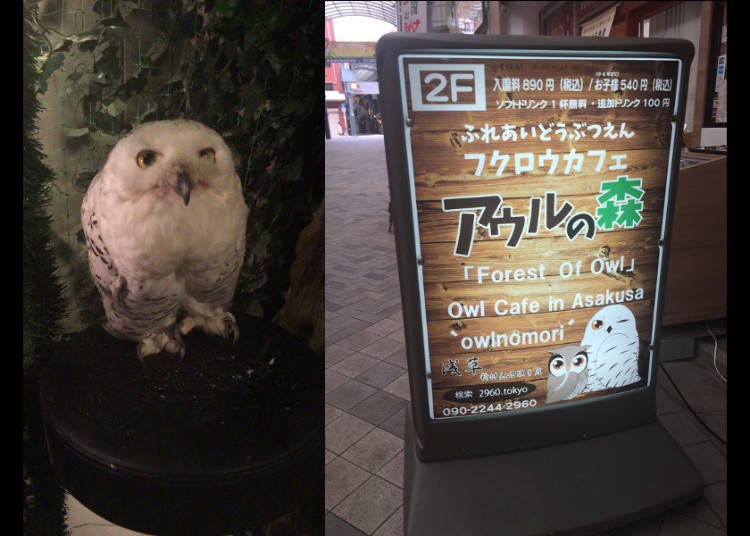 The proliferation of cat cafes in Tokyo paved the way for more exotic types of animal cafes, including mammals, birds, and reptiles. In 2015, the first Owl no Mori cafe opened its doors in Tokyo’s so-called “Electric Town,” and otaku-paradise, Akihabara. The cafe was so successful, the business spread its wings, opening a second location in Asakusa in June of 2016.

All of the owls living in Owl no Mori are captive bred, which means they have been raised among humans since hatching. Owl no Mori does not carry any wild-capture owls. I visited the Asakusa location, just a five minute walk from the station, a couple of minutes from the famous Senso-ji Temple. It can easily be spotted along the shopping street where it is located by its owl-themed decor, leading all the way to the second floor entrance.

Welcome to the Jungle! The System and Rules. 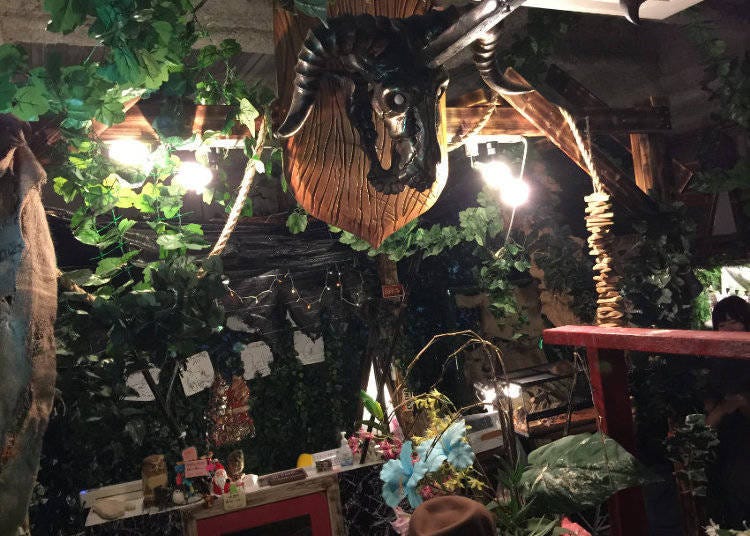 The nickname of Owl no Mori is “Jungle Cafe” for good reason; the entire cafe is covered in plants from floor to ceiling. Even if they aren’t all real, the green, jungly atmosphere certainly is a far cry from Tokyo’s urban metropolis. The dimmed lighting, accented with fairy lights on the ceiling, set the scene for a relaxing visit. From the very moment I entered the cafe, I knew it was going to be a completely different experience from other animal cafes. As I approached the reception desk I was pleasantly surprised by a tiny owl sitting right on top of a cage, completely out in the open! A staff member pointed to a spot by the door, where a much larger owl, by the name of Sushiroll, was nonchalantly perched. Somehow we had completely walked past this bird! The staff then explained the rules of Owl no Mori:

1. You can take pictures, but without flash.
2. You cannot touch owls behind placards labelled “Don’t touch.”
3. When you touch owls, use the back of your hand. Owls will be happy if you touch the tops of their head and their backs. 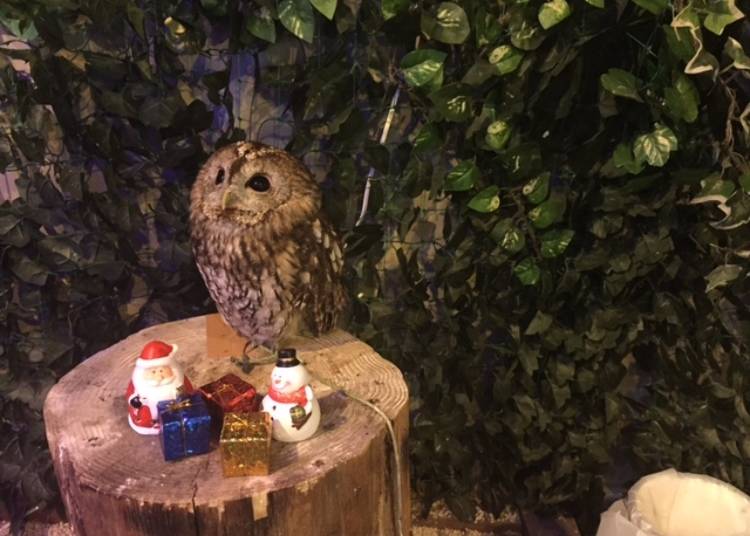 Also, before you touch any owls, you will be asked to use the provided disinfectant on your hands.
The entry fee to Owl no Mori costs just 890 yen (540 yen for kids), which includes one free drink (refills are an extra 100 yen).

After paying, the tiny owl that had been sitting on the desk spread his wings and flew a few inches to the money tray, causing a pile of business cards to fly our way! It was then that I realized that anything could happen in Owl no Mori and I knew we were in for a wild experience! 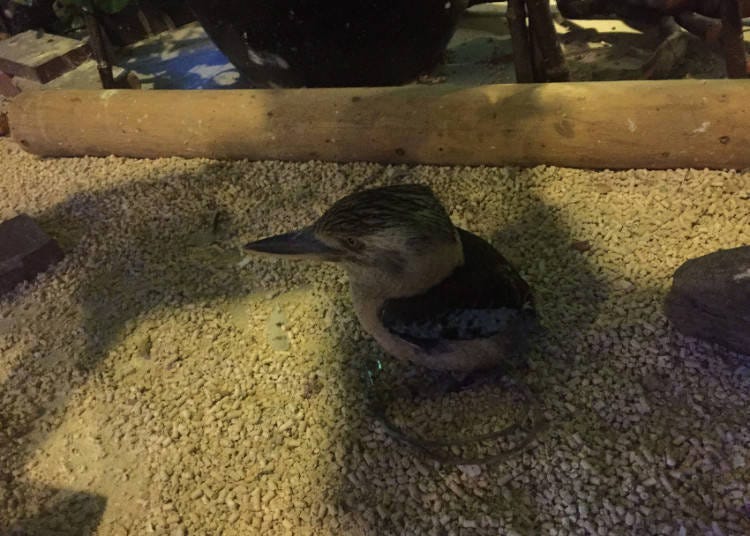 Owls weren’t the only birds I found in Owl no Mori. I was also able to see a grey parrot and a kingfisher in the mix. I was shown a leopard gecko and the staff member asked if I’d like to hold him. Of course, my answer was yes, and I was instructed on the best way to hold the lizard. There were also a few chinchillas, and even a couple of meerkats, one of which I had the chance to hold later in the visit. She was surprisingly affectionate, which made it really hard to put her back! 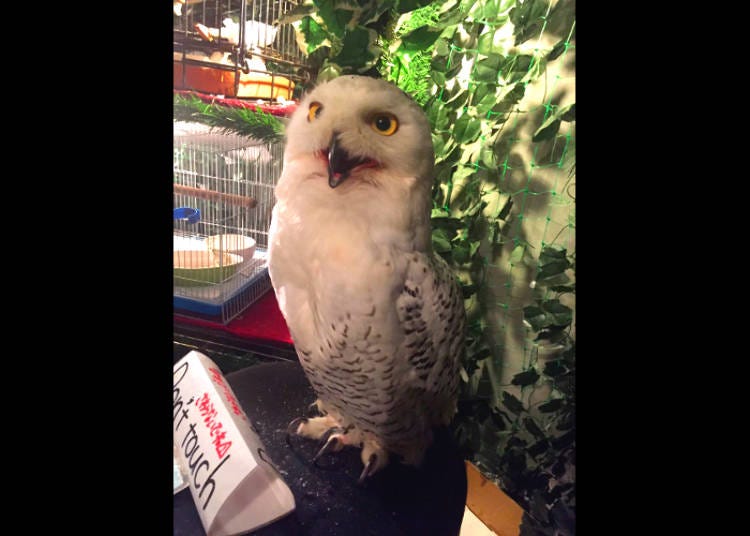 As we walked a bit more we saw what appeared to be a very opinionated snowy owl, named Nikuman (pork bun). Why opinionated? Not being an owl expert myself, I can’t say for sure, but the way she moved her head and opened her beak, it seemed like she had something to say! We couldn’t touch Nikuman, but she was interesting just to look at. It turns out that it’s easy to determine whether a snowy owl is male or female. Typically, males are completely white, while females have some kind spots or markings on their body.

Further into the Forest 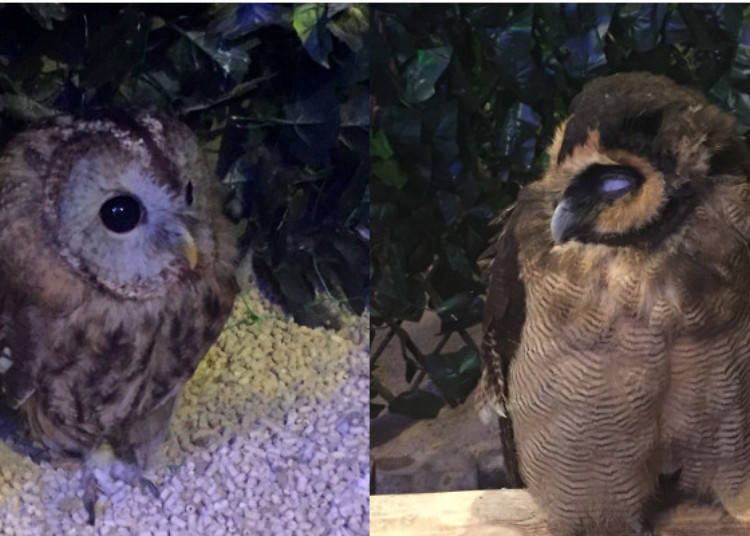 I went deeper into Owl no Mori, seeing several owls perched on what looked to be a wooden fence. The diversity among the different breeds of owls was fascinating. Variations in size, color, shape, and more can be seen, even after seeing just a few owls. For example, I was surprised to learn that larger owl named Hoppe was still just a baby, while one of the smallest owls was a fully-grown adult.

In between some wing flapping, and photo-bombing, I was able to get some quality owl-petting time in with the cafe’s most popular bird, Penpen! His feathers were as soft you could imagine, and like many of the other owls I encountered there, appeared to be completely used to human touch. 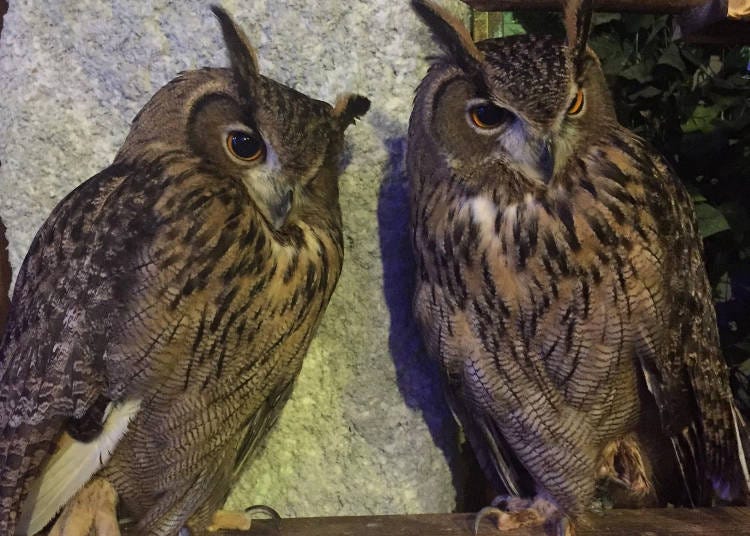 We met two particularly majestic-looking Great Horned Owls that went by the Japanese names of Taro and Jiro. The characteristic feathers sticking up above both eyes gave them a serious and stern appearance, as if they were deep in thought. 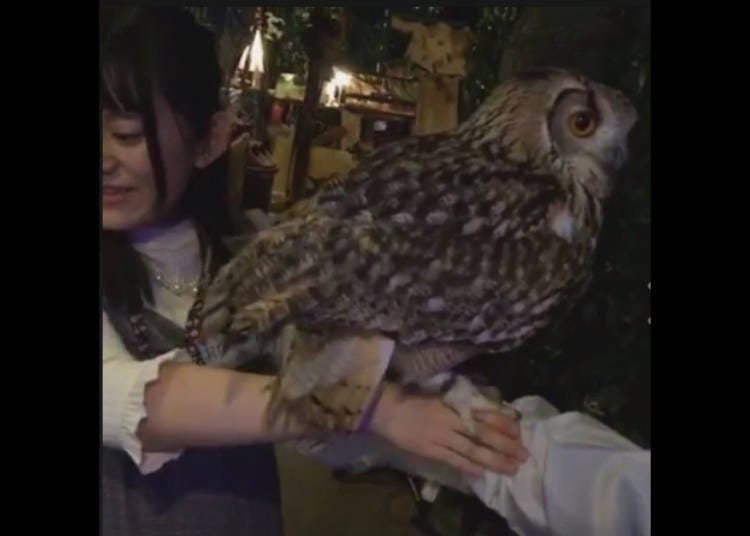 I was so happy simply looking at and petting the owls, it hadn't occurred to me that I might be able to hold one. Of course, I took advantage of the opportunity when it was offered, and was given a thick mitt to wear, onto which a charming Bengal Eagle Owl named Hanako was placed. 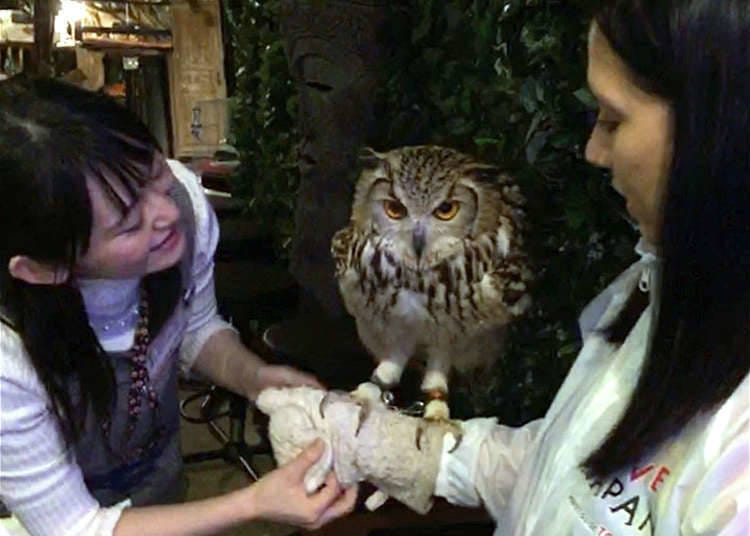 Hanako had beautifully patterned feathers that reminded me of a tiger. Even though she was heavier than I had anticipated, she balanced expertly on my arm, and it was less about “holding” and more about becoming a perch! 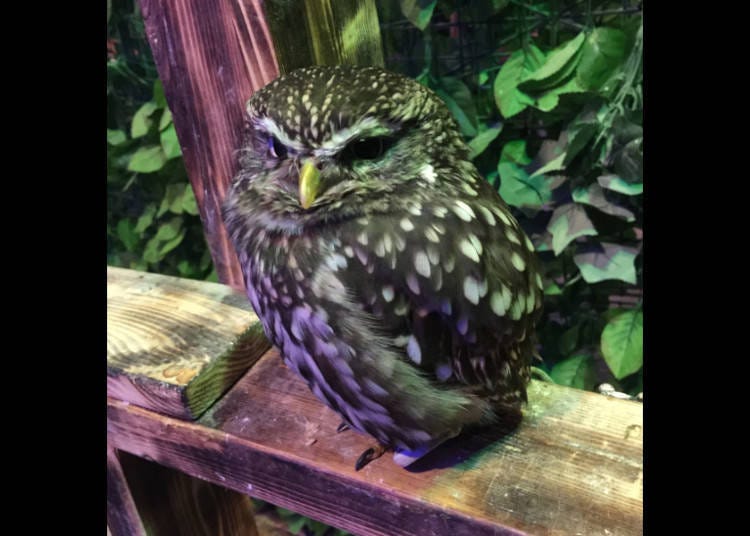 Throughout my visit, owl-related questions kept popping into my head, that the staff happily answered, as well as providing bits of trivia. For example, one staff member pointed out an owl named Kachikachi Yama, whose breed is known for being particularly nervous. When these owls become startled, they stretch their bodies, becoming incredibly long and thin, which we could see demonstrated on a nearby photo. I asked why some sleepy owls were standing on just one leg, and I was informed that it is a pose that they will take when they are feeling very relaxed, as well as when they sleep. And the reason why owls are known to turn their heads around so frequently? Well, it’s out of necessity as they cannot physically move their eyes as other animals can.

However, staff at Owl no Mori weren’t just knowledgeable, it was clear that they really cared for the animals and seemed to know the personality and temperament of each individual owl. They even warned us of a couple of owls with less amicable tendencies, so as not to ruffle any feathers. 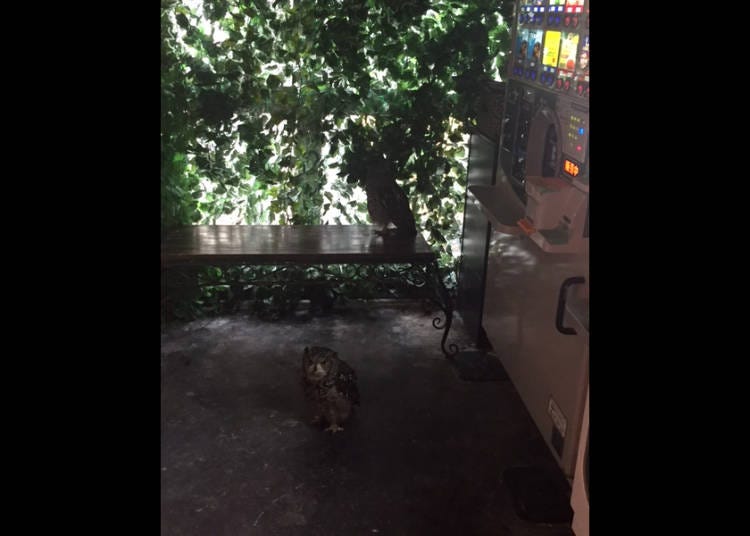 Included in the price of admission is one drink of your choice from one of the in-house vending machines serving up various coffees, mochas, tea, juice, and soft drinks. Refills are 100 yen. Look closely and you may find that you have some company with your coffee as I did, seeing two owls on top of the vending machines, and later one strolling in front of them!

It was in this area that I also encountered the resident iguana, which the staff also allowed me to pet. 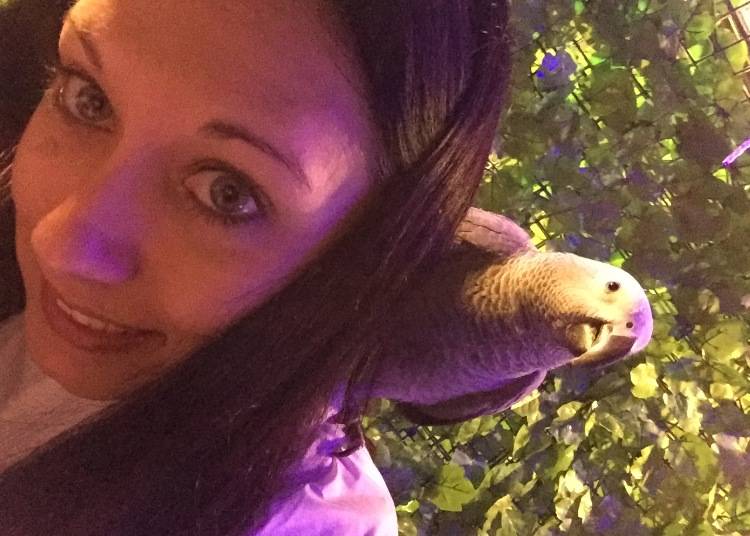 Visiting Owl no Mori was not only a unique experience, but also has a very relaxing vibe that makes it the perfect chill out spot while in the midst of sightseeing in Tokyo. Should you find yourself with some extra time while visiting Asakusa, why not take a visit to this miniature forest of owls?