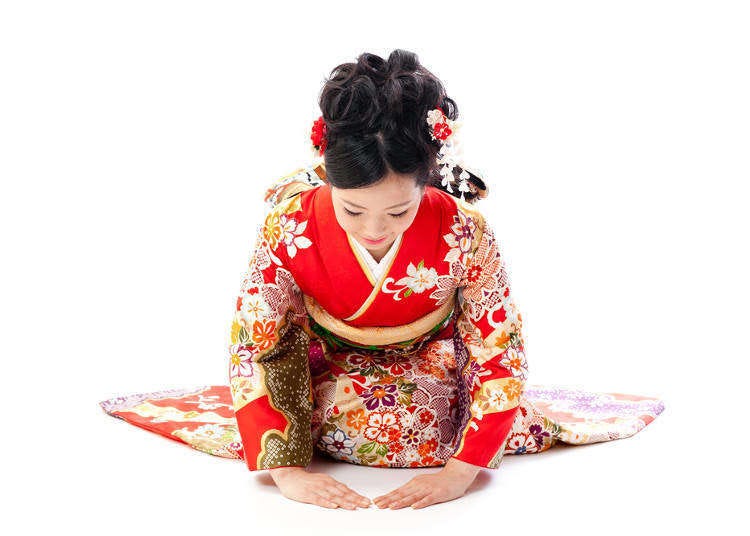 While walking through Tokyo in the evening, you are more than likely to spot several groups of businessmen and businesswomen bowing among themselves as they say goodbye for the night.

The concept bowing in Japan, like when and how to bow can be at times confusing. When learning Japanese, you learn about different degrees of politeness and things that imply it. Bowing is also an act of respect and politeness and it may be tough to tell the difference between one bow from another but it is good to learn about etiquette in Japan. Let’s go over the basics of how to bow in Japan.

Why do Japanese bow? 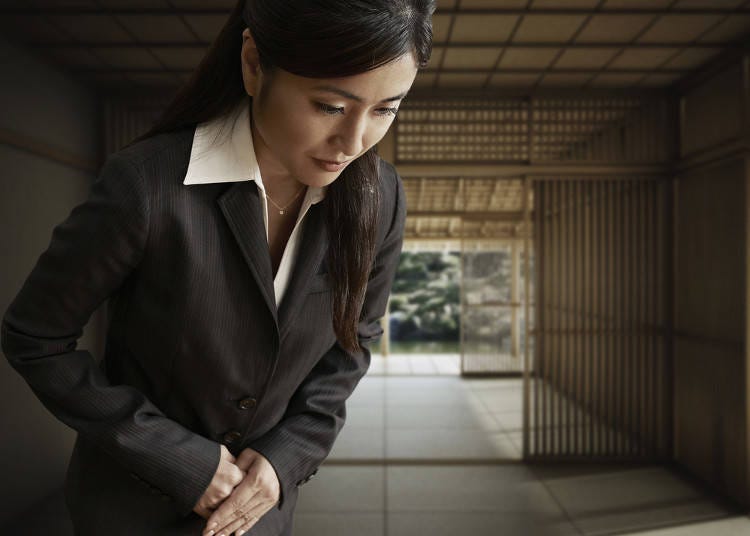 The act of bowing in Japan is thought to have begun around 500 to 800 AD, when Chinese Buddhism was introduced to Japan. Back then bowing was used to portray status, such as when greeting people of higher social status people would lower their heads to show an inferior position to signify that they are not a threat. You can see this in many films and plays set in the past. Just about everyone is expected to bow or kneel to the highest authority like kings and queens.

In modern day Japan, bowing has several different uses. Bowing in Japan is now used to thank, request, congratulate, and apologize to others. It’s become an essential cultural tool that everyone in Japan is taught to execute properly, from children to company workers.

How Japanese bow - and how to bow in Japan 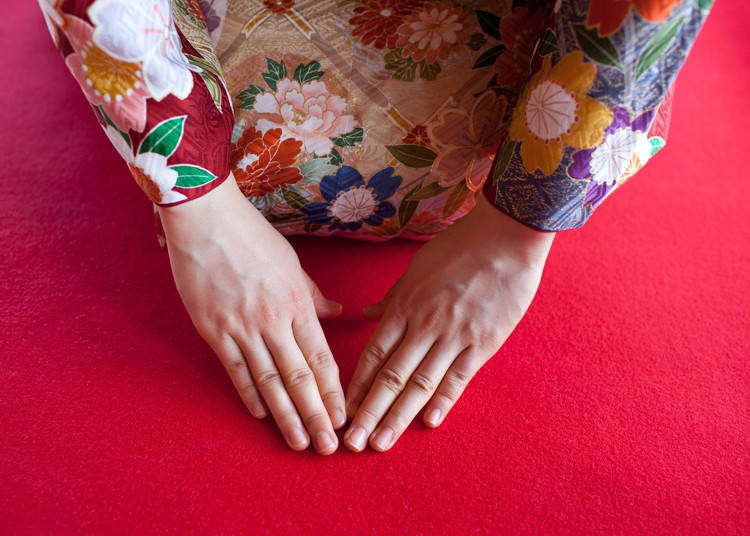 Bowing generally has two stances, sitting and standing. Every bow has three key points – the person’s back should be kept straight and not curved, the person’s legs and hips should remain in the same position when standing, and when bowing one should inhale when bowing and exhale when straightening back up.

Types of bows in Japan

While the essence of a bow generally stays the same, there are all kinds of different kinds of Japanese bows - let’s take a look at them. 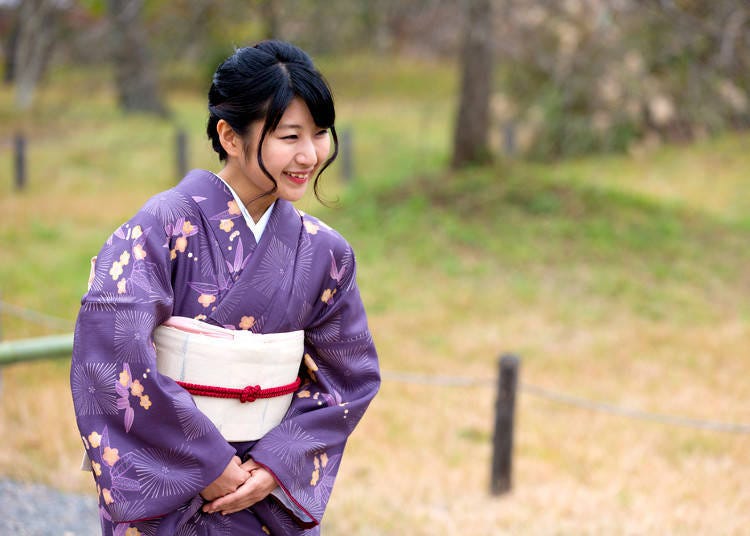 The most casual bow, used among friends or relative, is simply done by by nodding your head slightly. A more formal Japanese bow also called the “greeting bow,” the eshaku is used between people of equal status, like coworkers or friends of friends. It is usually paired with a greeting like "good morning" (ohayo gozaimasu) or after work (otsukaresama desu). This bow is done at an angle of 15 degrees. 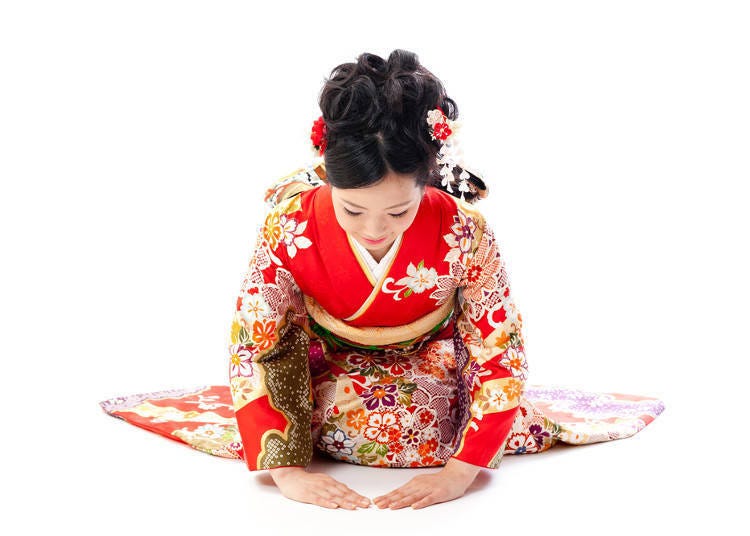 The “polite bow” called senrei is done while sitting and requires a 30 degree bow. It is used in formal and semi-formal occasions. The entire bow should last between two and three seconds, so do not get up again right away.

Keirei is the most common type of proper Japanese bow, it is done at a 30 degree angle while standing up. Usually used to thank or greet people, such as customers, it is also used when meeting people for the first time. 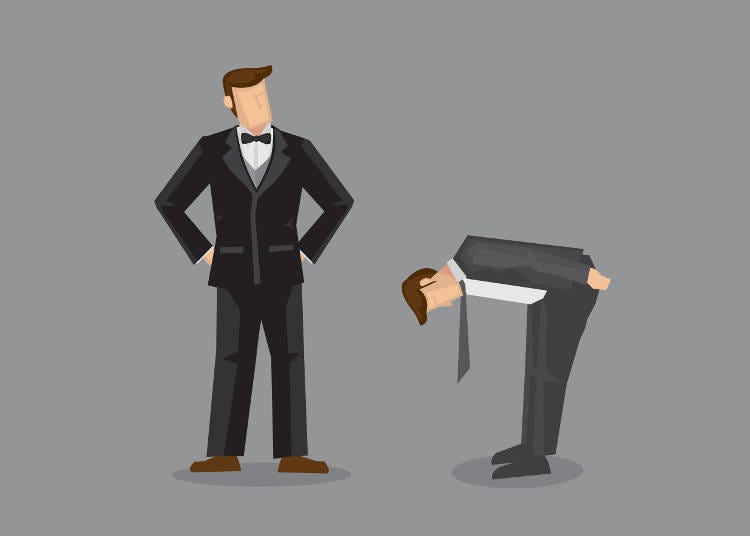 This is a more rare type of bow, reserved for special people like managers, in-laws, or important customers. A bow at a 45 degree angle, saikeirei is used to display profound respect or sincere apologies, held for around 3 seconds.

Finally, the highest and rarest form of bowing, shazai. In this bow, the person bowing bends forward 70 degrees and holds this position for 4 seconds. This bow is usually only seen when companies have to publicly apologize for their errors after having caused trouble to their customers and others.

Mastering the Art of Bowing in Japan 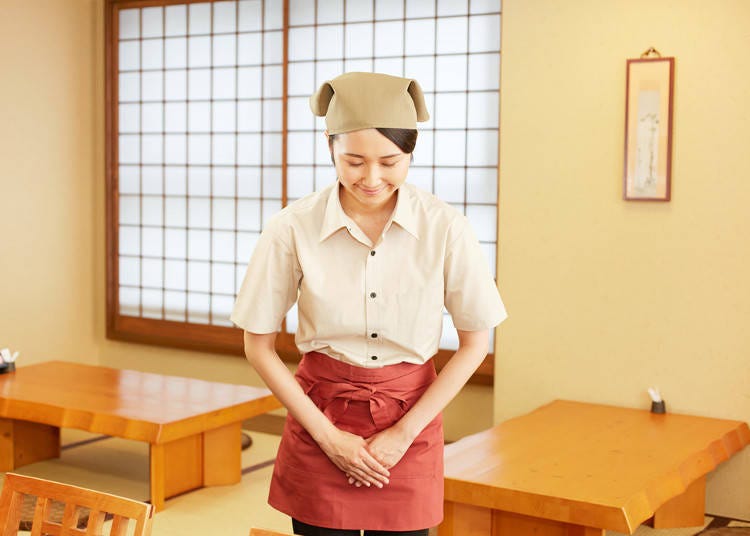 While there are some other forms of bowing, they are mostly reserved for specific religious events. All of these rules may be a lot to take in at once, but the general rule of thumb is: the more formal an event or higher the authority, the lower and longer the bow should be.

Also a side note: Putting your hands in front of your chest when bowing is a common mistake, it’s not used in modern day Japan except in worship.

Bowing is an intrinsic and fundamental part of Japanese society. It’s ingrained to the point where people even bow while on the phone. Politeness and respect is a quality that Japan has expressed throughout its long history.

Visiting a Japanese Home: 10 Tips You Should Know!
(VIDEO) All About Japanese Body Language and Hand Gestures
*This information is from the time of this article's publication.
*Prices and options mentioned are subject to change.
*Unless stated otherwise, all prices include tax.