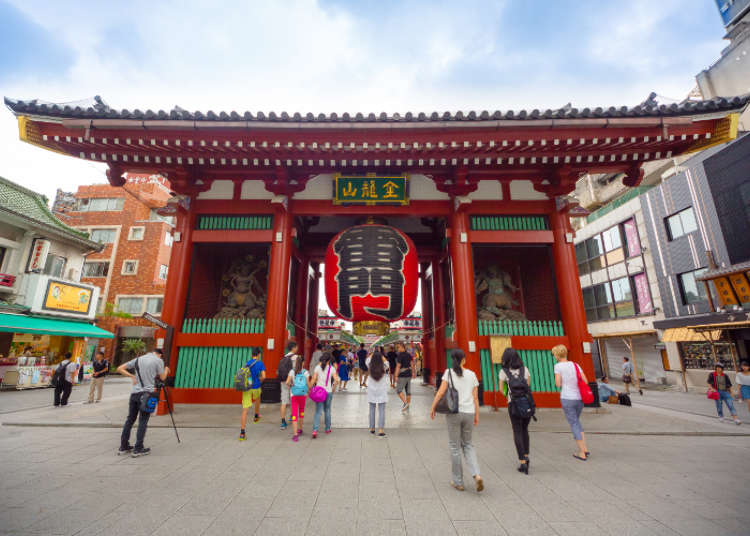 Asakusa is a treasury of shrines and temples! Let's go around collecting goshuin on Shichi Fukujin Meguri, a tour to visit seven temples of seven deities. A goshuin is proof of pilgrimage that is composed of words (some are written in sumi Indian ink) and red stamps. You can get them when you visit a temple or shrine for 300 to 500 yen. Each temple has its own unique goshuin design. Like a piece of art, each goshuin is written by hand as a one-of-a-kind item.

Senso-ji Temple, the Symbol of Asakusa

A large lantern weighing 500 kg, rising above a five-storied pagoda, and the main temple building with Kannon (goddess of mercy) resting peacefully. All such must-see places are inside Senso-ji temple, the main spot of the Asakusa tour. Daikokuten (god of wealth), one of the seven deities, is enshrined in Yougou-dou. Three kinds of goshuin are obtainable inside Senso-ji temple, and all of them are available at goshuin-jo for collection.

Asakusa Shrine is Known for an Edokko's (Tokyoites') Chic Festival. 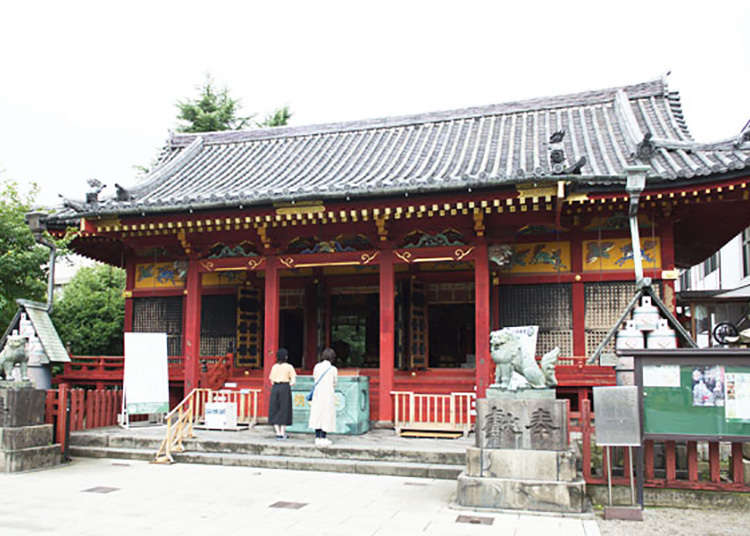 Asakusa Shrine, standing next to the main road to Senso-ji temple, celebrates the three gods who were the start of the temple. The nickname "Sansha-sama" (san means three, sha means shrine) originates from these gods. Asakusa Shrine is also famous for the Sansha Festival with it's wild parade of mikoshi (portable shrine) which vividly demonstrates the traditional Edo style, depicted in the old saying “fights and fireworks are Edo's flowers”.

The Goshuin of Asakusa Shrine 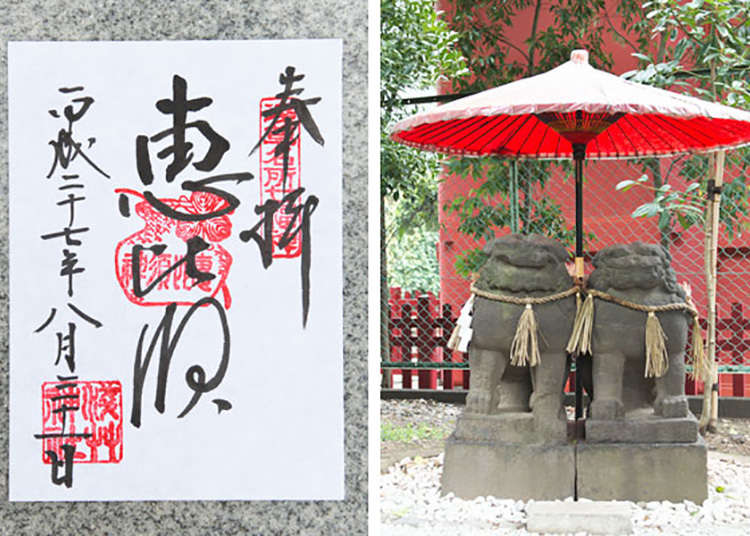 Left: The goshuin took the word of the thriving business of "Ebisu" and put it into characters, and used a creel to put caught fish in as its motif. Right: A pair of divine messengers lined up and sitting, Meoto Komainu offer good luck in matchmaking, romantic relationships, and harmony in marriage.

Matsuchiyama Shoden, a Temple of Serenity

Matsuchiyama Shoden is a temple paced on a hill along the Sumida River. Surrounded by woods, the precinct is an urban oasis, which will help you forget the bustle of the city. Bishamon (god of war) is one of the seven deities and is a protector of the principal god of this temple, Shoden-sama (god of wisdom and prophecy). The figure of Bishamon is courageous and worthy of being a guardian god and is said to ward off evil spirits and bring good luck. You can enter the main building and obtain the goshuin there.

Imado Shrine, the Birthplace of Maneki-neko

With his gentle face Fukurokuju is a deity of fortune that grants happiness, stability, and longevity. Since the temple also enshrines the first married coupe in Japanese mythology, Izanagi-no-mikoto and Izanami-no-mikoto, it is famous for and offers good luck in marriage. Imado ware is found in the Imado district of Asakusa, and is the birthplace of Maneki-neko, ornaments shaped like cats that beckon people with a raised paw. Reflecting these characteristics, the goshuin design has stamps of Fukurokuju with gentle smile and a pair of Maneki-neko that show a fulfillment of love. 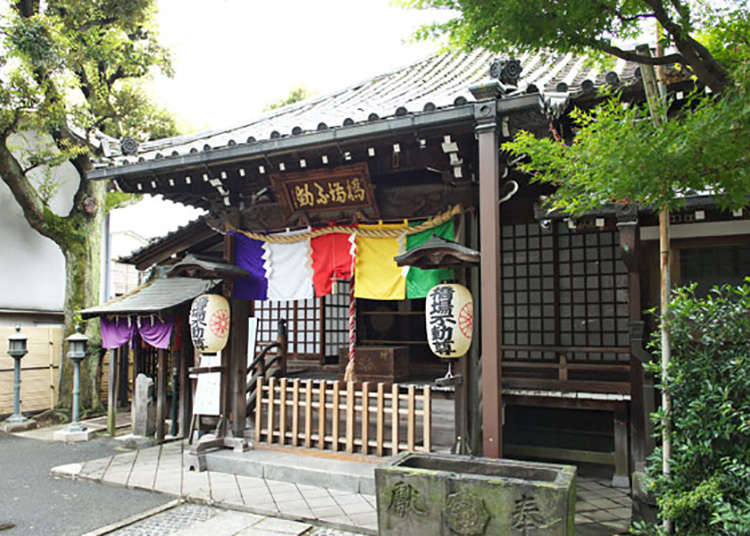 The temple is standing still at the end of narrow, antique-looking walking path nearby the Shirahige Bridge, with a distant view of TOKYO SKYTREE(R). Built in the Edo period, the current main temple building has a 700 year old ginkgo tree on the grounds. Many of the visitors even hug the large tree to gain divine blessings. 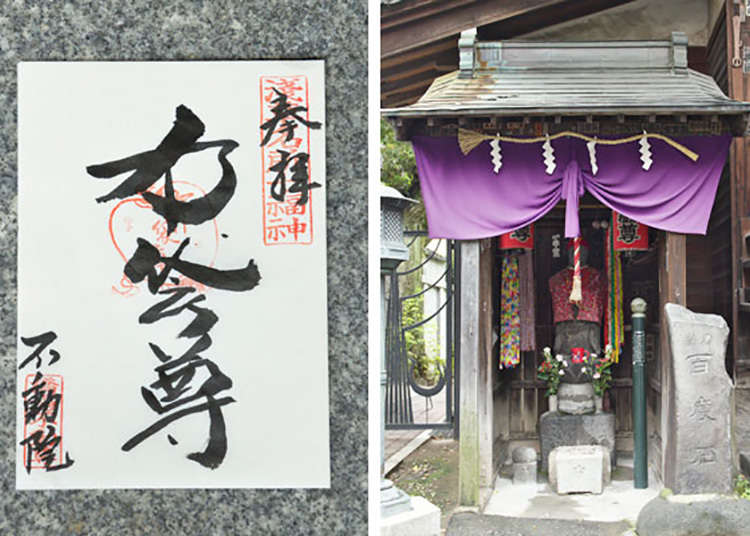 Left: Hotei-son (god of happiness) is usually depicted having a plump figure. The kanji character for “cloth” (pronounced “ho”, the first word of Hotei-son) looks round, too. Right: On the left of the main temple building, you can find Osazuke-jizo-son and Hyakudo-ishi. Osazuke-jizo-son is said to have a blessing for childbirth, and Hyakudo-ishi is placed for Ohyakudo-mairi, a Japanese folk belief of visiting the same temple or shrine for 100 times to make a wish.

Inside the grounds are 6 shrines and Jurojin (god of longevity) of the seven deities and a white fox that brings about prosperous businesses are enshrined there. Ishihama shrine is the general term for all of them. They were built more than 1200 years ago, and is known as the most famous spot among the numerous shrines in Tokyo. For the goshuin a figure of deer, a companion animal of Jurojin, is stamped.

This shrine is a combination of five shrines dedicated in the yukaku of Yoshiwara and Benzaiten (goddess of music) enshrined next to the yukaku. A yukaku is an area surrounded by walls or ditches, and in the Edo period, licensed quarters were gathered inside such areas. On the wall of okumiya (rear shrine) of the shrine, which was restored in 2012, the fascinating figure of Benzaiten is vividly painted. In the spring, Aizome-zakura (indigo cherry blossoms) in the precinct splendidly bloom, which were planted for the blessing of a good match for those who visited the yukaku.

The Goshuin of Yoshiwara Shrine 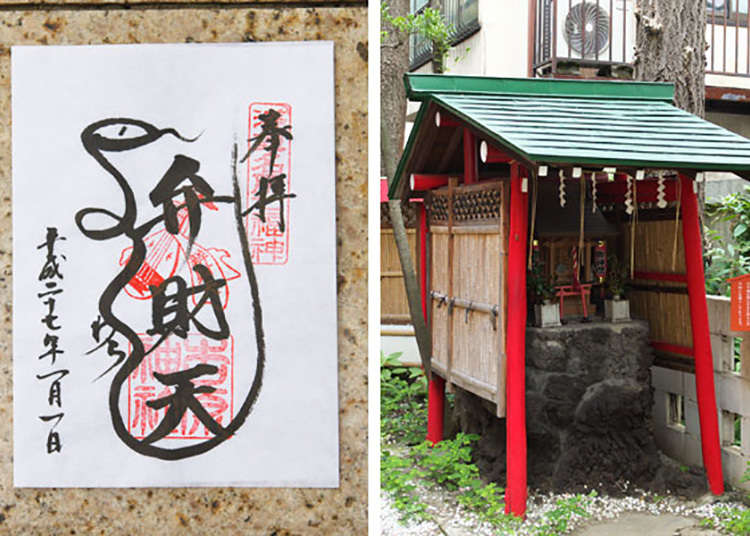 Left: The goshuin design expresses the head and body of a snake through Japanese characters. Right: Oana-sama protects the land from the underground. The legend says, if you wish something from the bottom of your heart to this god the wish will always come true.

Ootori Shrine and its Tori-no-Ichi Festival in November

The Tori-no-Ichi Festival, which is held every November at shrines in Tokyo, originated at Ootori Shrine. Together with Imado Shrine, this shrine is counted as one of the temples and shrines for Shitamachi Hassya Fukumairi (visiting eight temples/shrines to be blessed). The goshuin here has stamps of a rake, the symbol of Tori-no-Ichi, and Nade-okame (woman’s mask), which was handed down in the shrine from generation to generation.

Yasaki-inari Shrine with an Emerald Roof 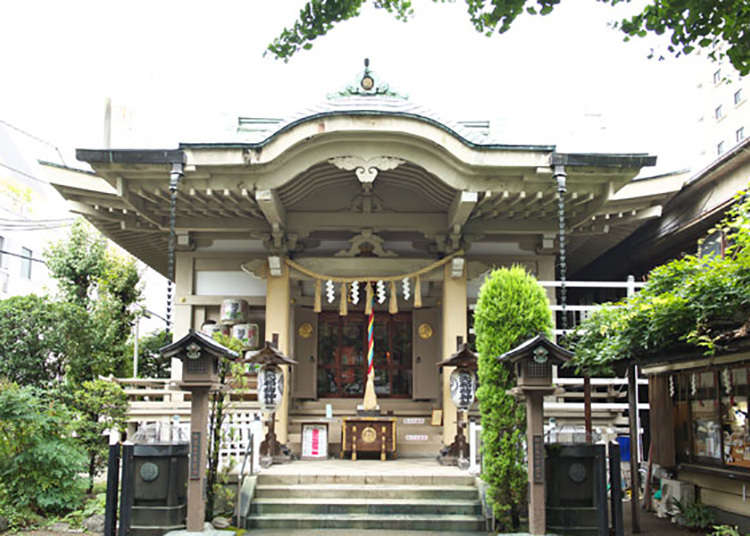 Tokugawa Iemitsu, the third shogun of the Tokugawa family in the Edo period, established Sanjusangen-do for the peace in the country, national security, and tempering martial arts. The hall built after the manner of ones in Kyoto became the beginning of Yasaki-inari. The name Yasaki also came from "yumi" (a bow) and "ya" (an arrow). Fukurokuju (god of happiness, wealth, and long life) of the seven deities is placed at the right side of the worship hall in front of the main building. 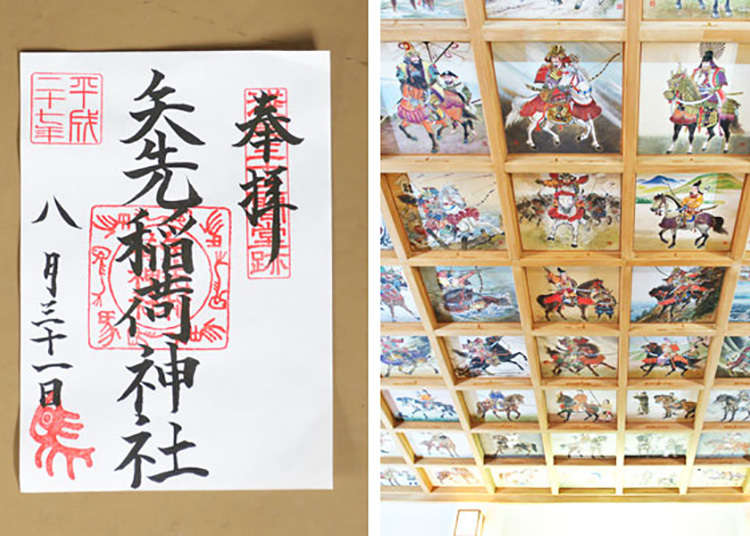 Left: Stamps of kanji characters meaning horse in the center and on the lower right. Both are in ancient forms and are impressive. Right: Since ancient times horses were together with martial arts. On the ceiling of the worship hall, more than 100 pieces of Nihon-jobashi (pictures of ancient warriors on horseback) are set as an offering.