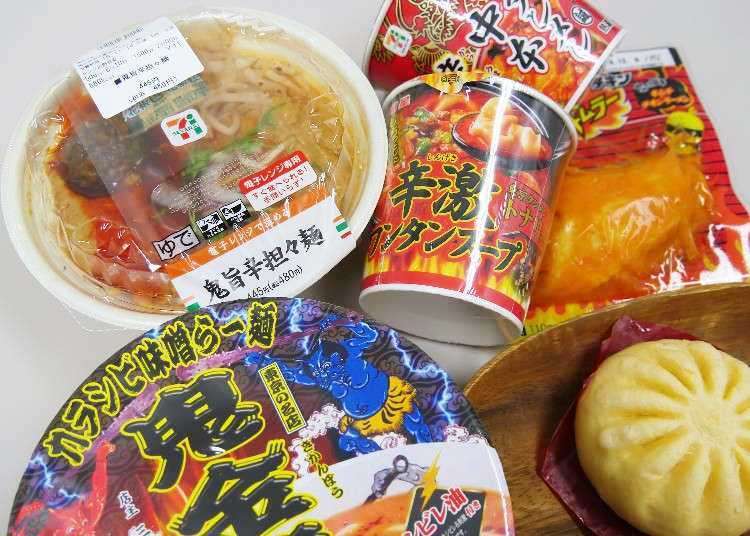 Japanese convenience stores have a constant lineup of amazing products. They have many delicious items from hot snacks in front of the register to boxed bento meals, chilled daily dishes, and cup ramen. Stopping by the convenience store when you are hungry, it is hard to pick something to eat with so many options. 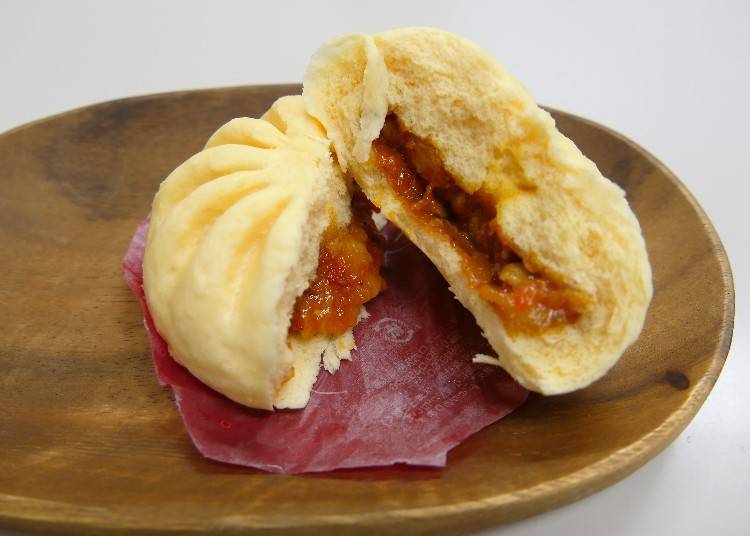 It’s hard to beat the temptation to buy a steaming chūka man (pork bun) in the hot case next to the register in winter.

The Uma Kara Cheese Dak-galbi Man is a chūka man filled with cheese and chicken thighs seasoned with sweet and spicy sauce made with doubanjiang and gochujang. It is a chuka man that allows you to enjoy the popular dish of Shin-Okubo, cheese dak-galbi. 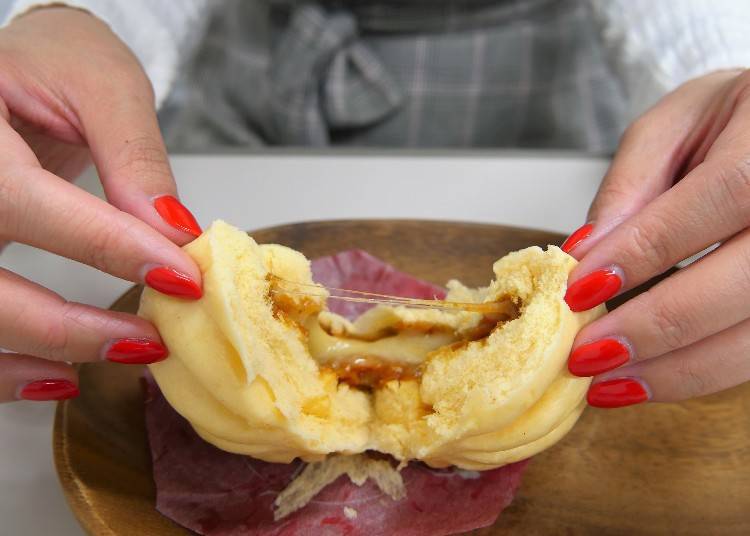 Ms. Qin: Wow it’s so cheesy! As a Chinese person the idea of putting cheese in a chūkaman is very surprising. It doesn’t feel like a traditional chūkaman. 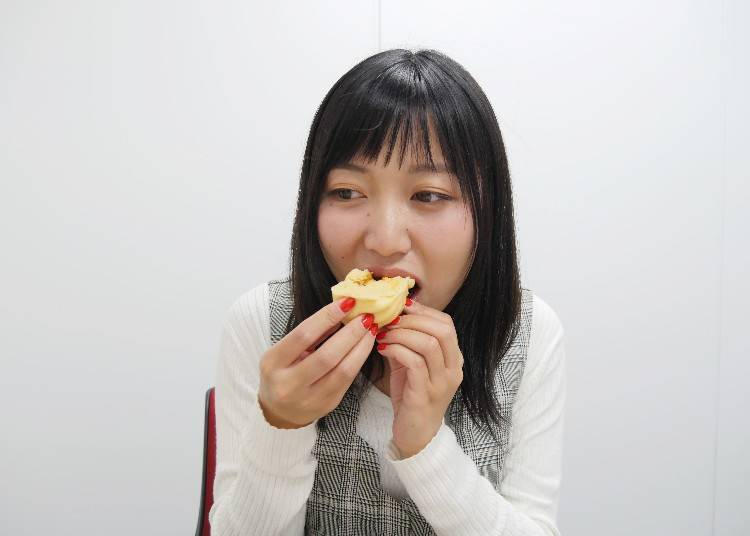 Ms. Qin: Hmmm, it isn’t that spicy. Actually it’s sweeter, I wonder if it’s because of the cheese? If the ingredients were on pizza it might be good, but it doesn’t match a chūkaman. Although the bun is soft and good.

It seems as though it wasn’t spicy enough. I guess this level of spiciness can’t satisfy a Chinese lady.

For the Japanese staff it seemed spicy enough. The thick meat inside gave it a nice texture. For Japanese people who are used to unique variations of chūkaman, this chūkaman is satisfying. 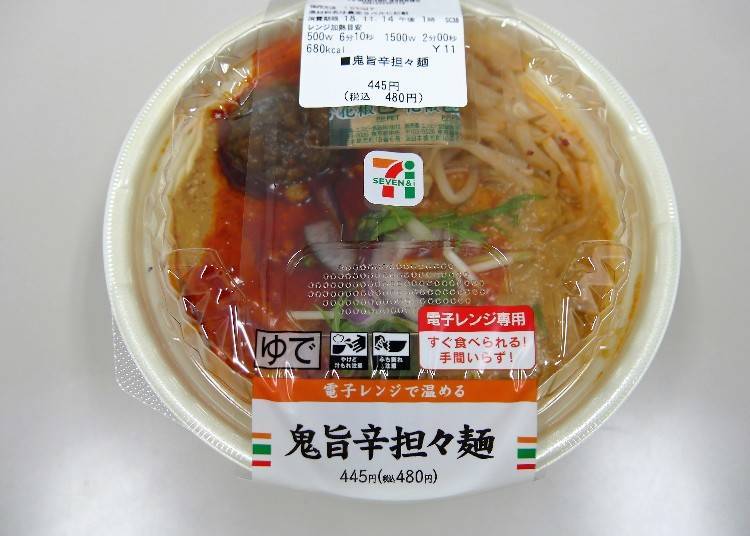 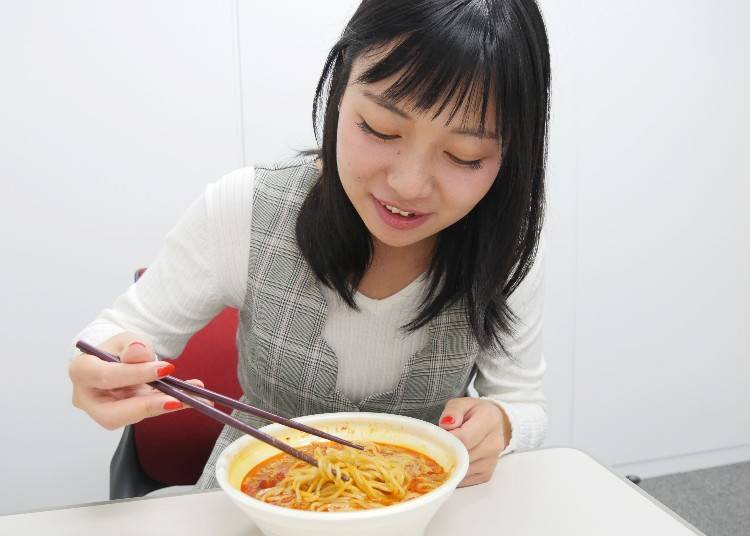 Ms. Qin: It smells good! It looks good and the side of Chinese pepper is nice. Let’s try it without the Chinese pepper first. Hmmm, normal spiciness. The sesame sauce counters the spiciness. Although you can taste the umami of the soup.

Add in the Chinese pepper... 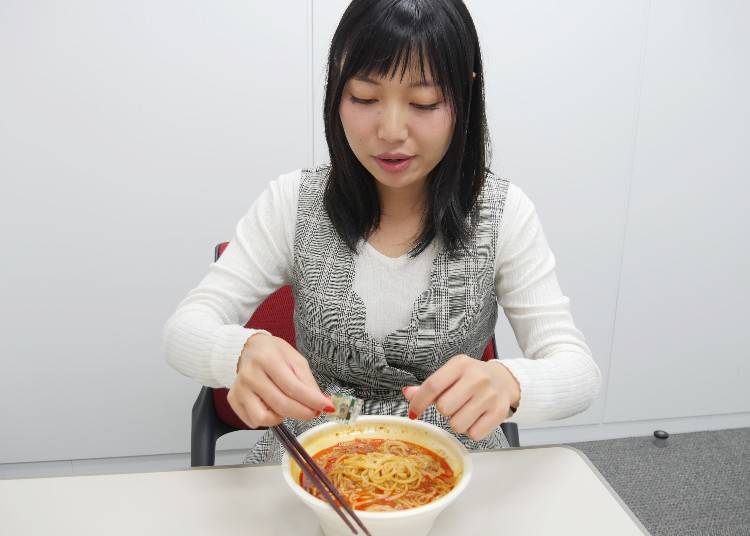 Ms. Qin: Yup, it tastes much better with the Chinese pepper. It has a tingly flavor and the spiciness got milder. I think the noodles became softer, and I think it’s perfect this way because Chinese people prefer softer noodles.

Ms. Qin: I wish there was more ingredients, but it taste goods. However it would be much better if it was spicier and had more tingly taste (lol). In China we put in a lot of coriander and scallions, without these two ingredients it’s just not satisfying.

Our Japanese staff tried the tan tan men and could taste the umami and Chinese pepper. By mixing the ingredients it makes it milder and easier to eat.

Also it sure is a nice being alive in a time where you are able to eat authentic tan tan men with Chinese pepper at home. 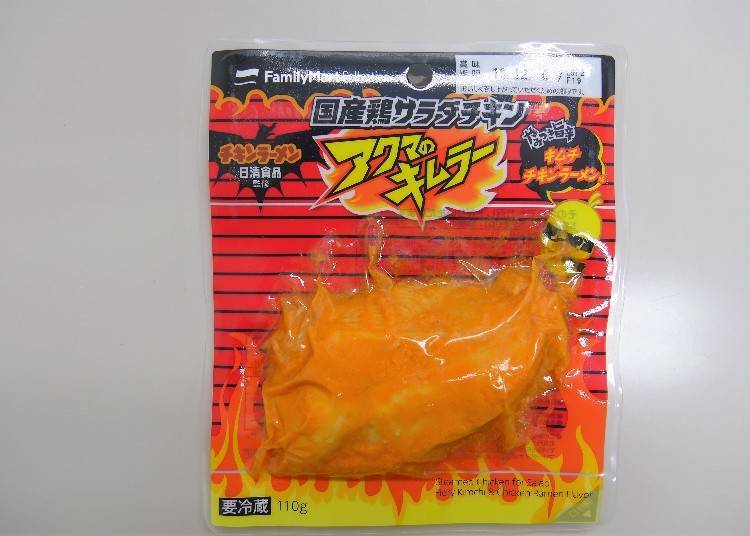 Next up is the spiced chicken breast from Family Mart, Kokusan Tori Salad Chicken – Akuma-no-Kimura. There are many types of ‘salad chicken’s in convenience stores, but this one sounds spicy.

This is a product collaboration with Nissin Foods ‘Chicken Ramen Akuma no Kimura.’ The chicken has a roasted shoyu soy sauce flavor base, with spiciness and sourness of the kimchi, and a hint of sesame oil.

These kinds of chicken are popular in Japan for use as salad toppings; lets see if Ms. Qin has tried it before?

Ms. Qin: I haven’t had salad chicken, having cold meat is just odd...

I see, so this will be her first time trying ‘salad chicken’. Ms. Qin first smells the chicken. 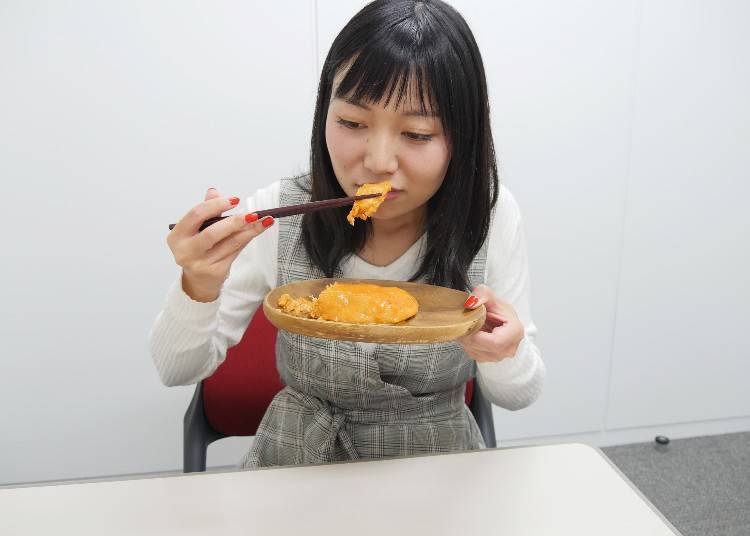 Ms. Qin: Hmm it has a sour smell, like it is fermented. 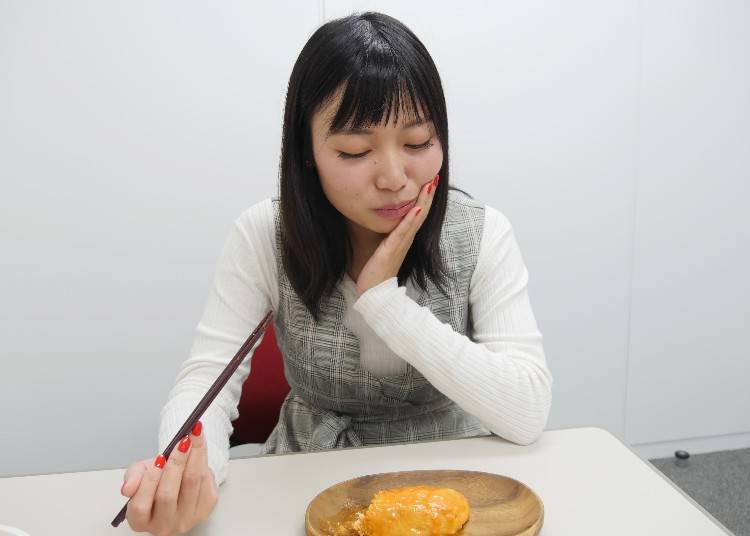 Ms. Qin: It tastes... it’s delicious but, it doesn’t taste spicy at all. It reminds me of Chinese fermented bean curd. I think the sour and fermented flavor is stronger. I think it will be good warm too. Chop it up and put it on rice porridge.

Our Japanese staff tried it too, and it was delicious, but wasn’t that spicy. It has the unique fermented sourness of kimchi. We got the impression that they kept the ease to eat of a ‘salad chicken’ and just added a new flavor. 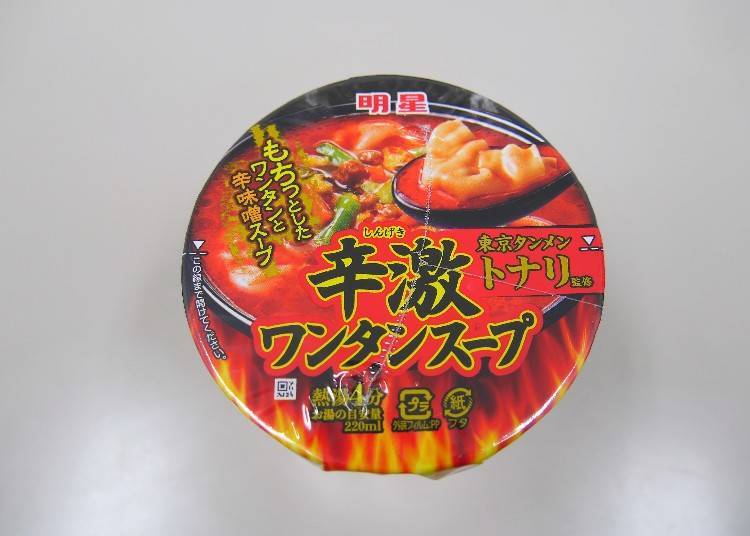 When we mixed the Kara-Geki Wonton Soup’s powder soup base, it didn’t look so spicy, however once we added the liquid soup that came in a separate bag, the soup color changed! The Japanese staff who was preparing the soup was surprised how their eyes started to burn and their nose started to itch even though they didn’t eat it. 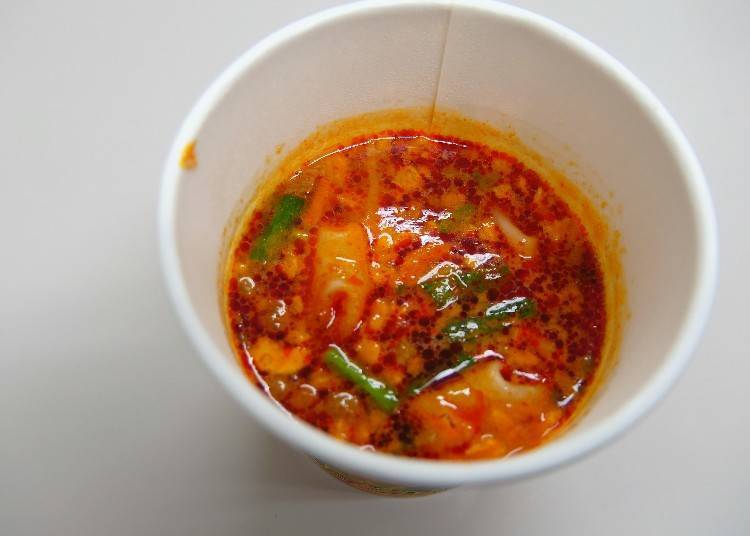 Let’s see how this soup that KO’d the Japanese staff does against Ms. Qin. 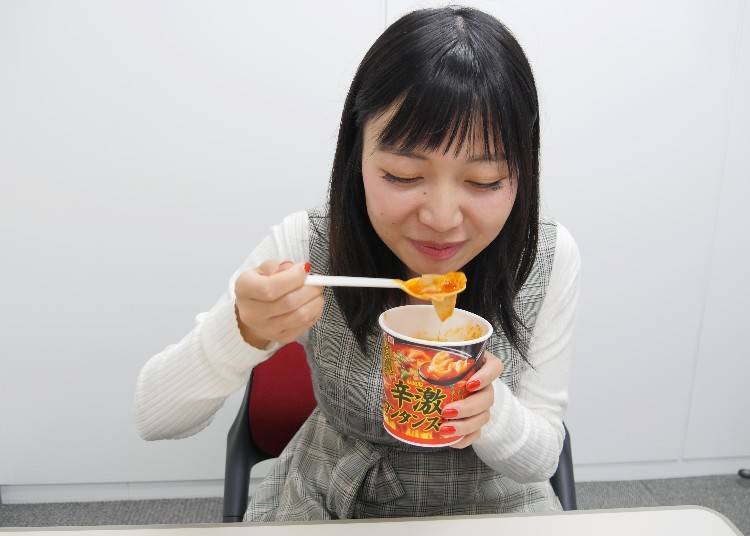 Ms. Qin: Wow look at that color, it looks like a punishment (lol). Hmm, it has a shoyu smell and a nostalgic smell.

After taking a bite... 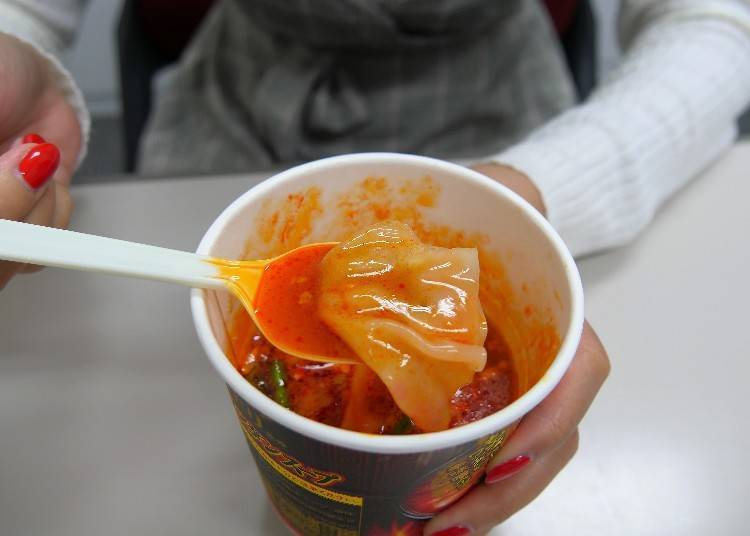 Ms. Qin: It tastes good, but it’s not that spicy. It reminds me of the Chinese instant ramen ‘Laotan Sancai,’ it’s spicy, sour and good. You can really taste the doubanjiang in it, but it isn’t as spicy as it looks.

Ms. Qin: Chinese wonton only has meat in it and its quite filling, however the wonton in Japanese soups are smaller and you can really taste the umami of the soup.

Even though the soup looked very spicy, it didn’t have that much effect on Ms. Qin. However it was more than enough for our Japanese staff… The soup made with seafood and pork, with garlic, ginger, chili pepper, miso and doubanjian has a complex umami within the spiciness that makes you want more. 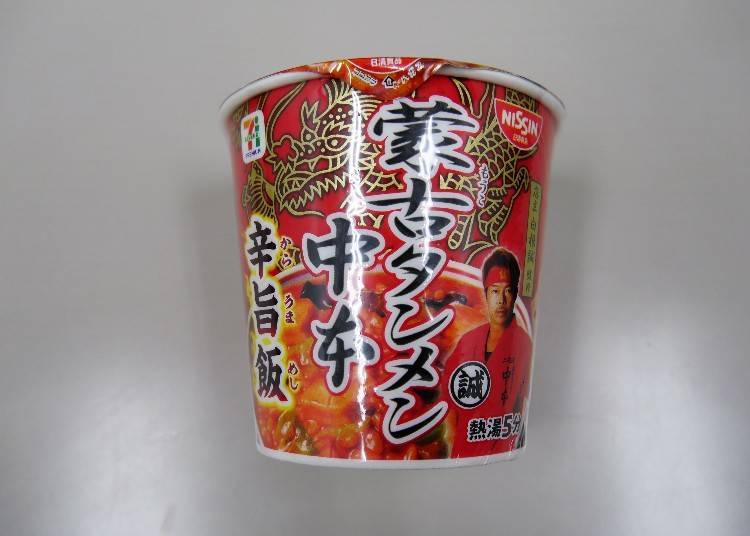 Next up is Mokotanmen Nakamoto Umakara Meshi made under the supervision of Shirone Makoto the owner of the popular ramen chain shop Mokotanmen Nakamoto lead by the main store in Kami-Itabashi. Waiting 5 minutes after pouring hot water in the cup, the Mokotanmen sytle rice soup is complete. 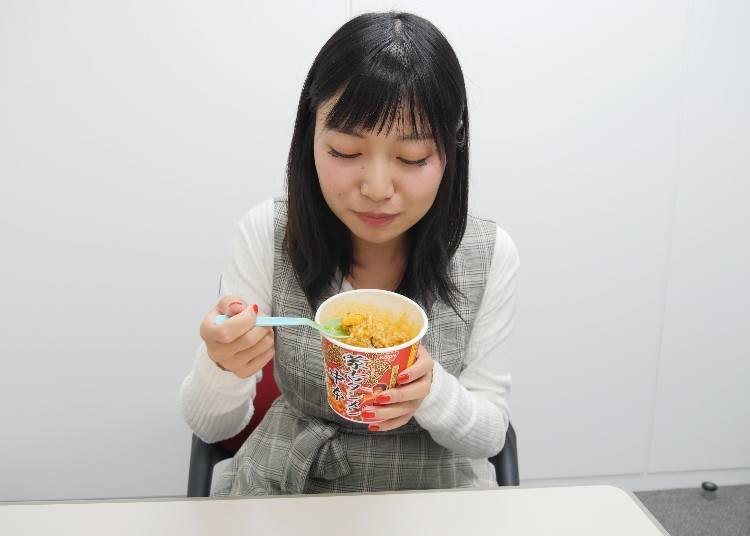 Ms. Qin: So a rice dish this time, kind of rare. It doesn’t look too spicy but, hmm it’s actually spicy. Not very spicy but, more sweet and spicy, I think the sweetness is stronger than the spiciness. 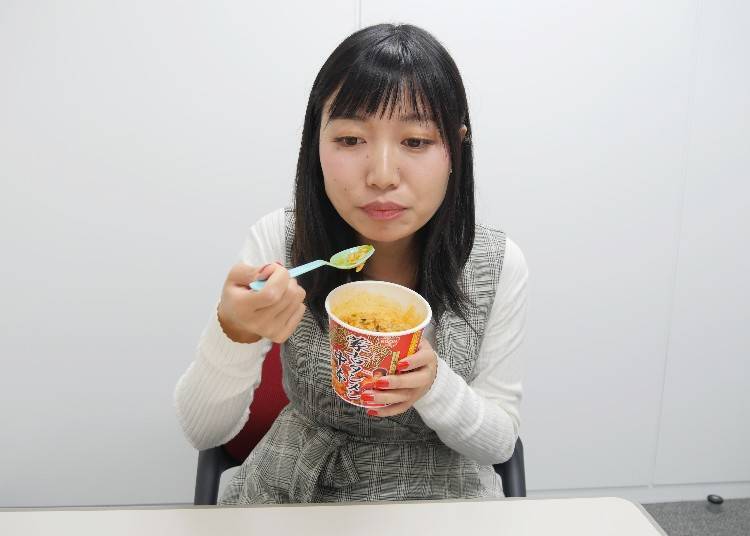 At this point Ms. Qin slows down a bit, it seems that the complicated flavor of sweetness and spiciness didn’t match her.

This product is spicy but, the flavor of the vegetables and miso outweighs the chili pepper flavor. It has a unique flavor that you either like it or dislike it. 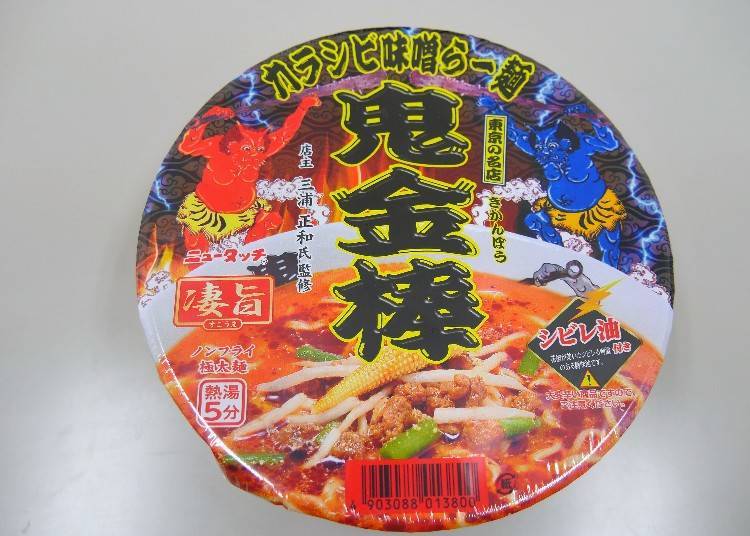 The final dish on the list is Kikanbo Karashibi Miso Ramen made under the supervision of Kikanbo, a popular ramen shop in Tokyo. The ramen is made with liquid soup and karashibi spice. The karashibi spice is made from chili peppers (kara) and sansho (shibi). 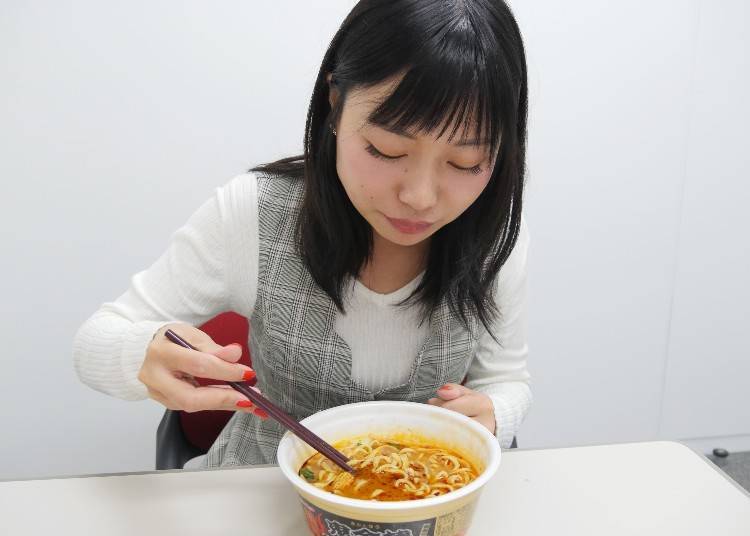 The color of the soup has a unique brown color instead of red, let’s see if this dish can satisfy Ms. Qin. 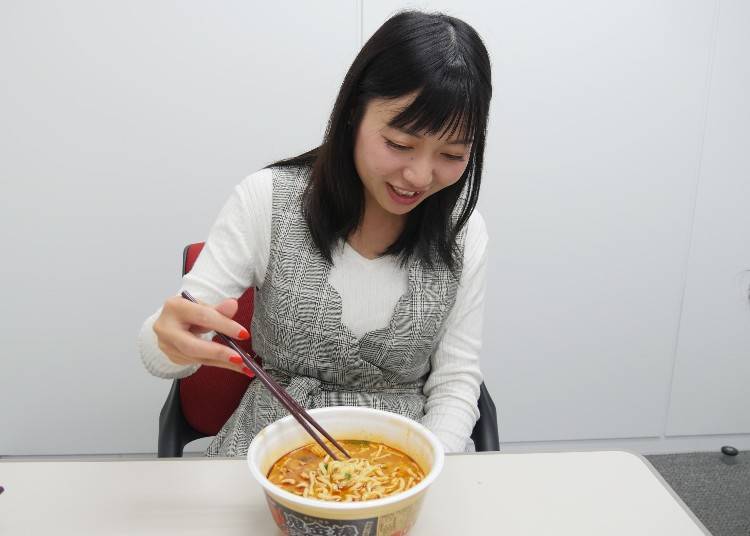 Ms. Qin: I can taste shoyu, or is it miso. It’s not as spicy or tingly as I thought. I wonder if they are using green chili peppers. The soup tastes good but it’s not super spicy. Although I like the flavor and the noodles are great. It’s like raw noodles.

It seems as though she enjoyed the soup flavor and noodles, but it wasn’t spicy enough for her. Compared to the other dishes, it doesn’t have the direct spiciness like the other red soups. As a Japanese person we were able to taste, the strong original flavor of umami from the miso and tingly feeling from the sansho.

■Which Convenience Store Spicy Food was the Best According to Ms. Qin?

After eating all 6 convenience store dishes, which did Ms. Qin enjoy the most?

Ms. Qin: I have to say that Tokyo Tanmen Tonari Kanshu Kara-Geki Wonton Soup is the best! 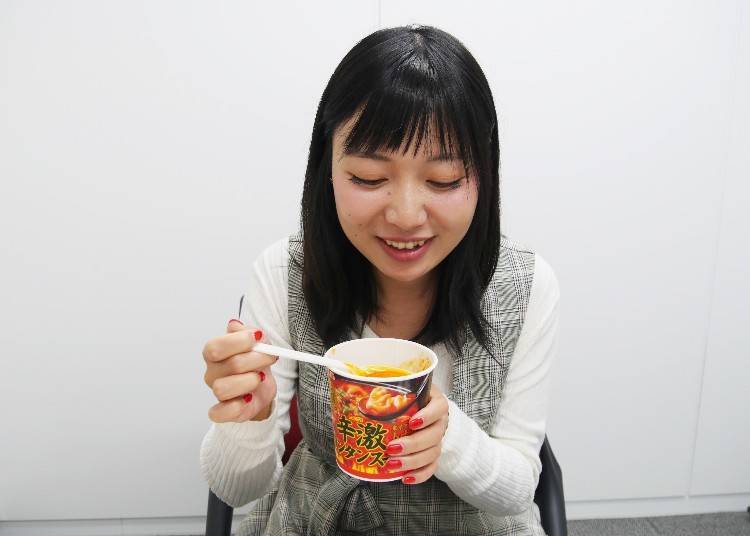 Ms. Qin: The wonton is delicious and the soup had a nostalgic flavor. As a Chinese I sometimes crave for the ‘Laotan Sancai’ flavor. I think this wonton soup will gain popularity from Chinese people with its spicy and sour flavor. I definitely need to get more of this and have to stop by the convenience store on my way home. If they made it spicier, I’ll probably buy it in bulk (lol).

The nostalgic flavor and the delicious wonton hit Ms. Qin’s spot. I guess if we were living abroad, we would stock up on food that reminds us of what we used to eat since we were young.

I was surprised that food that feels spicy to Japanese people didn’t affect a Chinese person who has been eating spicy food since they were young. I’m sure it also depends on the person too.

Seeing our Japanese staff drinking water with tears in their eyes, and looking at Ms. Qin not even sweating, it made me realize the difference in the sensitivity of the tongues towards spiciness at this tasting.