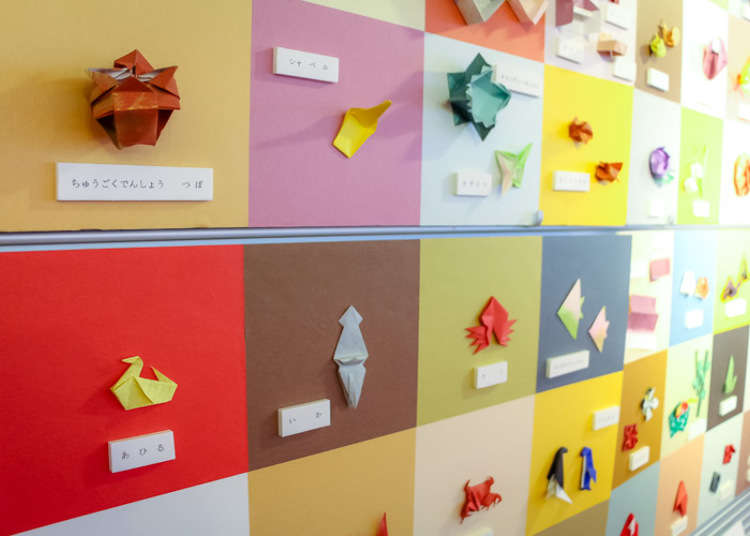 For origami fans in the Tokyo area, there is one spot that simply cannot be missed: Ochanomizu Origami Kaikan, also known as the International Origami Center. Not just a place to view countless works or origami, visitors also have the chance to participate in workshops, shop for origami-related goods, and even see traditional Japanese paper being made right before their eyes! This is not only the first origami center in Japan, but the first in the world. I visited Origami Kaikan to learn more about Japan’s famous paper-folding art form. 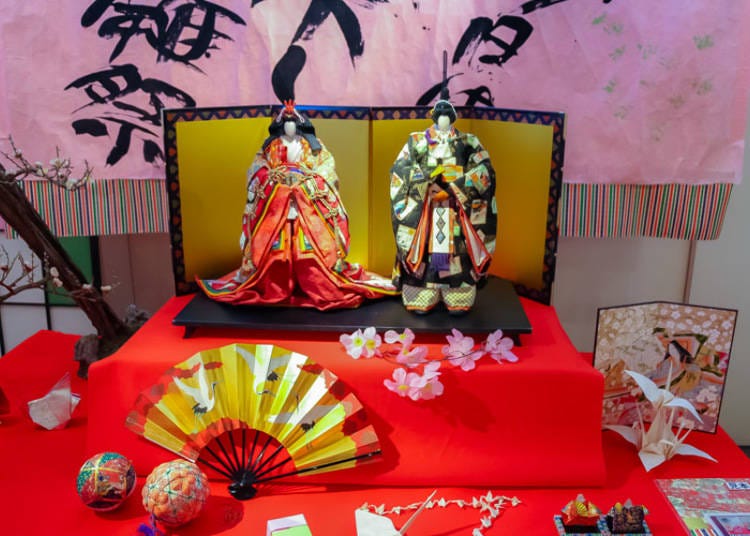 Origami, the traditional Japanese art of paper-folding, has become known worldwide. From intricately folded flowers to frogs that can literally jump, Japan seems to have perfected the art of the paper craft. Origami can be found in many areas of Japanese culture. The origami crane, for example, is a symbol of hope and healing. It is said that 1,000 paper cranes bring all kinds of luck–such as happiness and prosperity to a newly-wedded couple, or long life when given to a newborn baby. Another tradition that incorporates origami is the Girls’ Day custom of Nagashi-bina, which involves setting dolls, many of which are made with origami, afloat on a river. At the International Origami Center, I was able to see these types of origami, along with many others on display. 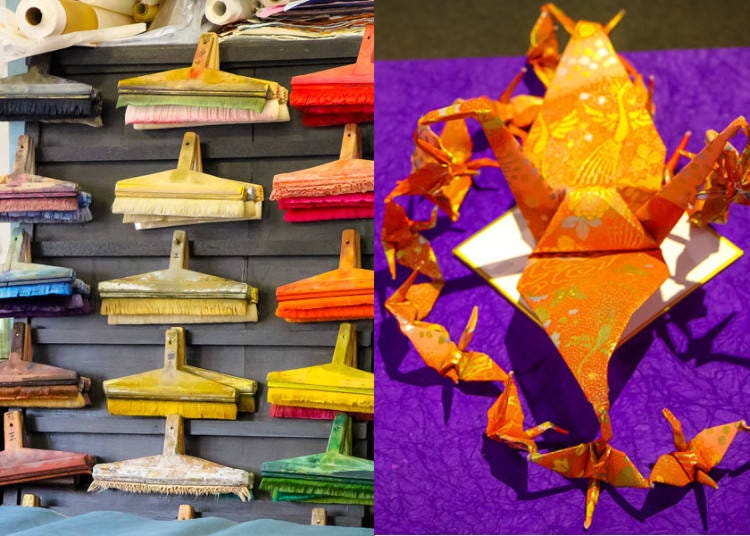 The company that manages Ochanomizu Origami Kaikan, Yushima No Kobayashi Co. Ltd., has been in the business of traditional Japanese paper, known as ‘washi,’ since 1858. The company introduced the world’s first educational origami paper (the colorful square sheets found in stationery shops across Japan).

This tradition of producing high quality washi has continued for over 150 years. Even today, the paper is produced in the factory located within Origami Kaikan, which visitors have the chance to see firsthand. Origami Kaikan has been recognized as one of the ”Cultural Treasures” of Bunkyo Ward in Tokyo. Incredibly, admission to the center is free of charge.

The Origami Gallery and Shop 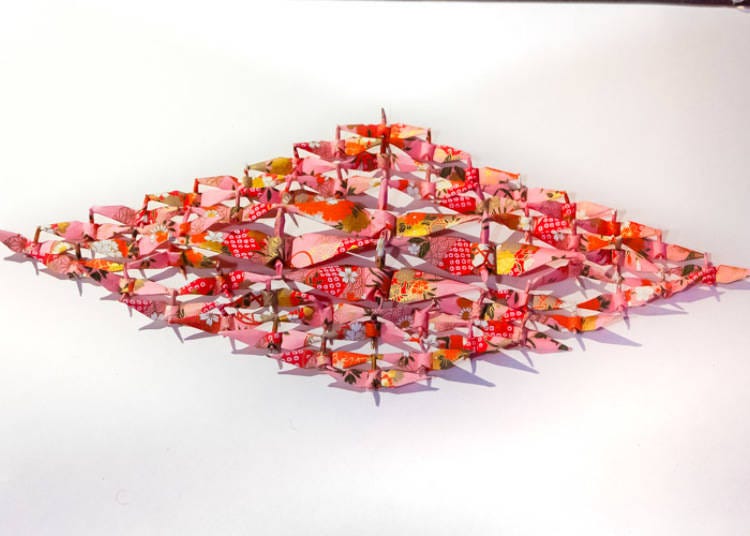 Immediately after entering the International Origami Center, you will be met with a gallery full of washi origami dolls and paper cranes. One of my favorite exhibits was a piece called ‘renzuru,’ a diamond-shaped origami made up of 52 small cranes that are all connected and made from a single piece of paper. At the shop, various types of origami paper are on sale, such as washi and chiyogami, perfect to make your very own origami creations. 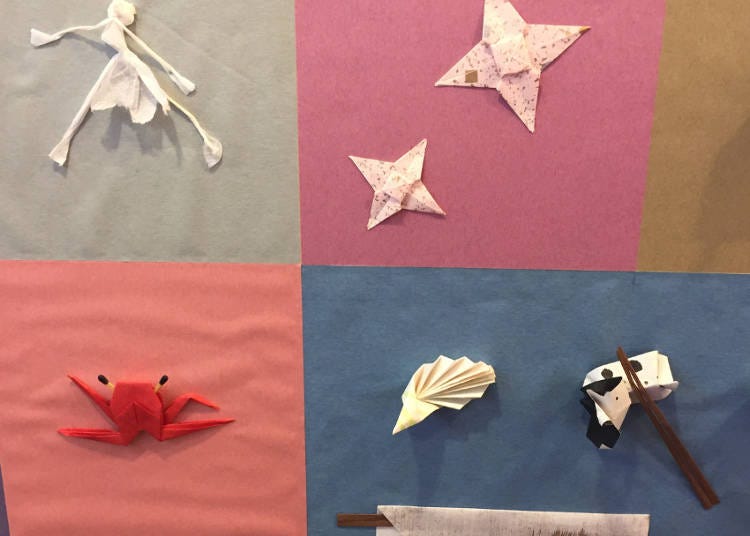 The gallery is located on the second floor. This is where you can see hundreds of different origami. One wall is dedicated exclusively to some of the most standard, traditional origami–by viewing these crafts you can really begin to get a sense of the roots of origami. I was surprised by how innovative some of the origami were. Many appeared to be quite modern, using materials I had never before associated with the art form: a crab with matchstick eyes, a ballerina created from a twisted napkin. It seems that there was a lot more to origami than I had ever imagined. 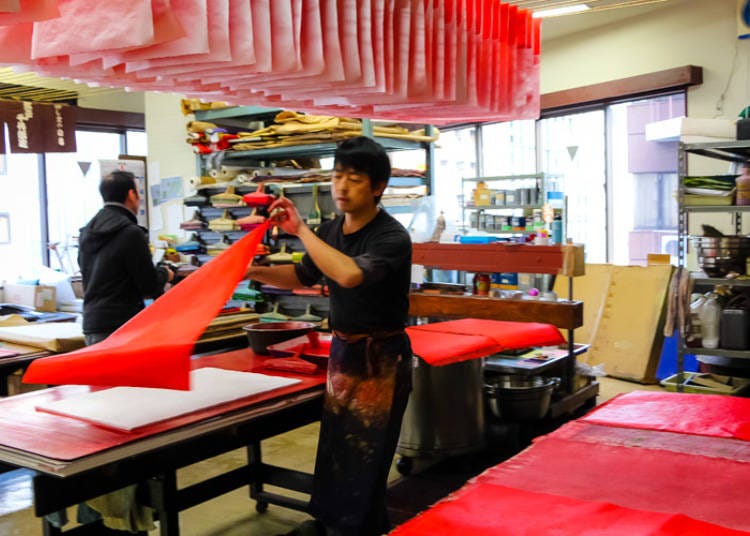 The fourth floor is where the washi dyeing takes place. This traditional Japanese paper is dyed by hand, a process which visitors are welcome to observe right up close. I watched as a craftsman went through the process of dyeing paper, brushing red ink smoothly over each piece, before hanging them up to dry. This factory also produces ‘chiyogami,’ a type of washi features a Japanese design or pattern printed on it. 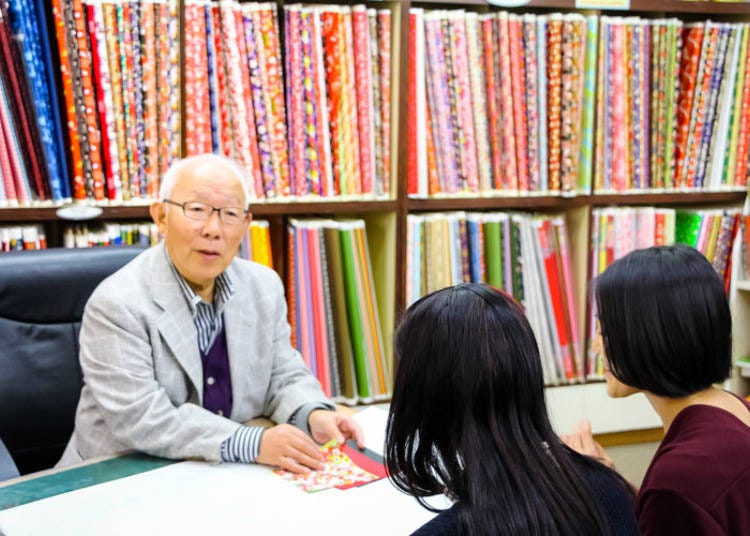 By far, the highlight of the day was being able to watch a demonstration by Origami Kaikan director Kazuo Kobayashi. Mr. Kobayashi has had over 40 years of experience in the origami world. In fact, origami is a tradition that has been passed down through generations of the the Kobayashi family, beginning with the center’s founder Kosuke Kobayashi.

Whether due to something in the Kobayashi genes, decades of practice, or perhaps both, the current director demonstrates skill of a true origami master. Without even looking at the paper, he was able to create the most intricate origami, quickly and effortlessly folding as he chatted about his craft. In just a short time he made rings, flowers, and animals, which he gifted to audience members gathered around his work table. 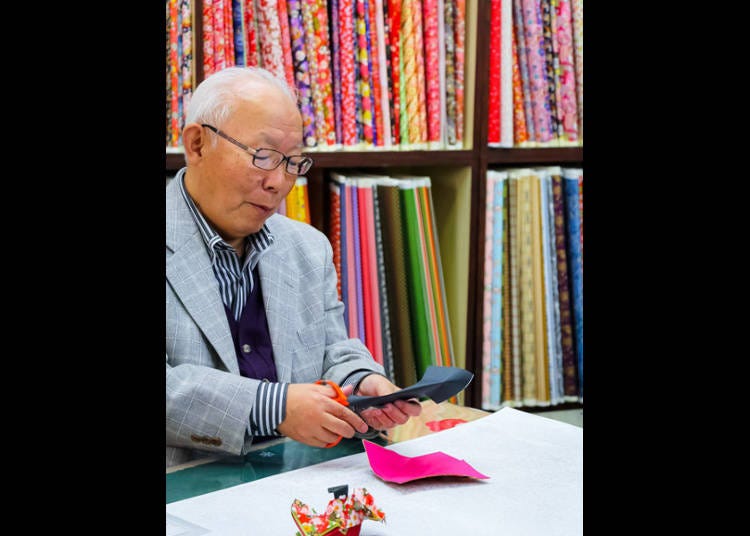 During this demonstration, I had a chance to have a mini-lesson from the origami master himself! As spring was just around the corner, he showed us how to make a pair of dolls in honor of the upcoming Hina Matsuri (Girls’ Day) festival in March. Using different colors of paper, we made a kimono-clad noble couple resembling traditional Japanese dolls. 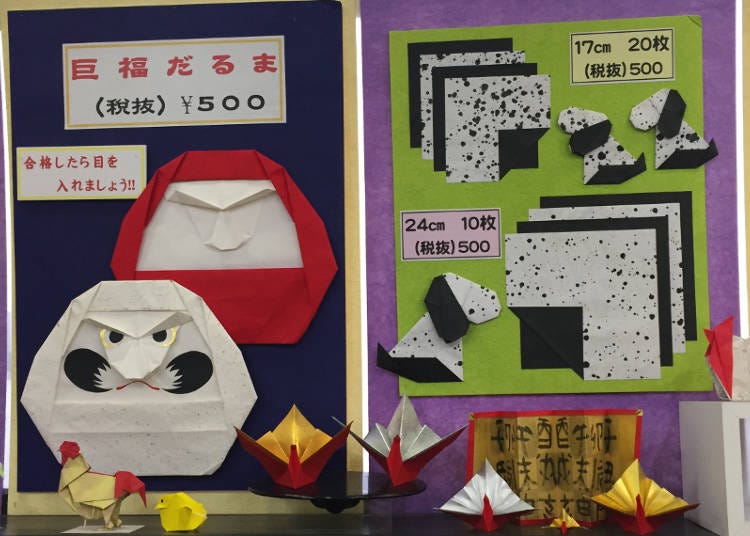 Kobayashi has written many books on the topic of origami, and throughout the demonstration, he did not hesitate to take a moment to autograph a book purchased by many an awestruck fan, even including a small personally-made origami as a present. And if you’re wondering what his favorite origami is– well, he couldn't name a particular shape, but he really liked a certain washi that debuted a few years ago that is black on one side and white with black specks on the other. The perfect paper for folding a dalmatian! 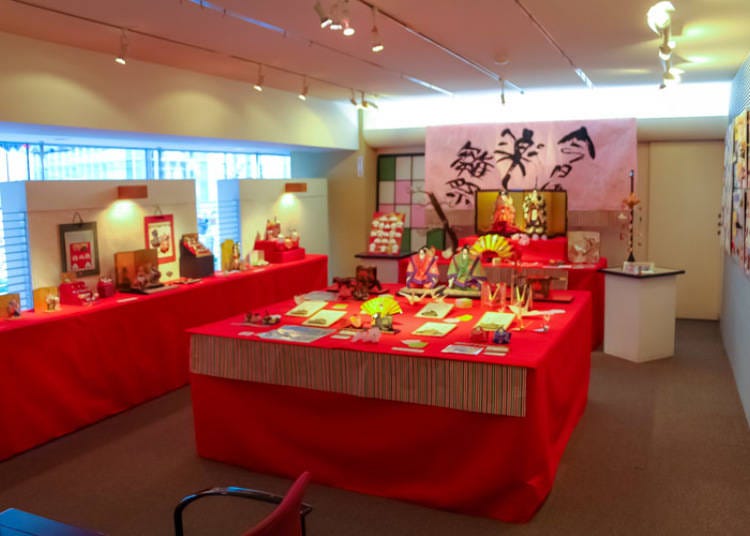 Not every activity has the ability to appeal to both locals and tourists, old and young, but the International Origami Center does just that. In addition to the gallery, factory, and shop, there are also special events and classes held regularly. 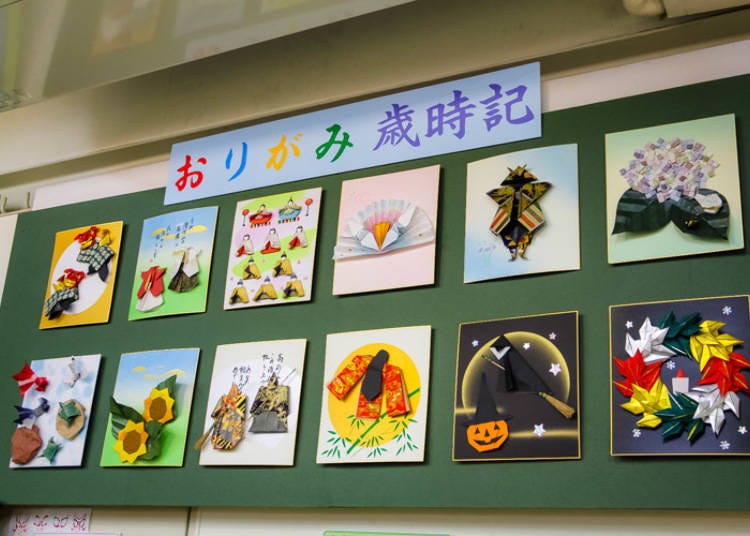 During my time there, I noticed quite a diversity among visitors: there were international tourists, senior citizens, and families. It really seems that origami has the power to bring together people from all walks of life! Don’t hesitate to stop by and see Origami Kaikan for yourself!