HOME Tohoku Miyagi Sendai And Matsushima Akiu Onsen: 5 Onsen Ryokan You Have to Stay in at Least Once in Your Life! 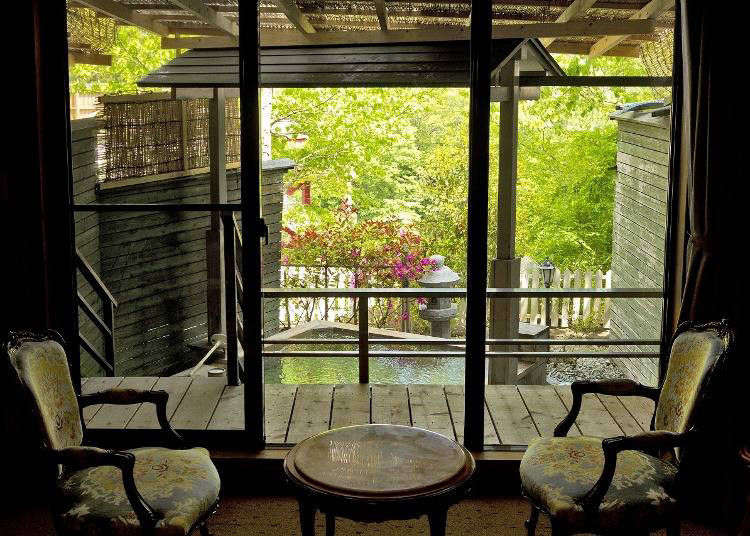 Akiu Onsen: 5 Onsen Ryokan You Have to Stay in at Least Once in Your Life!

The quality of the spring waters is of course superb, and with well-acclaimed cuisine and rooms with private open-air baths, any ryokan you choose will be bursting with personality. It’s conveniently located for a day trip from JR Sendai Station, which is a real draw too. Out of the numerous onsen hotels sequestered away, our local writer from Miyagi will be introducing their top five picks. 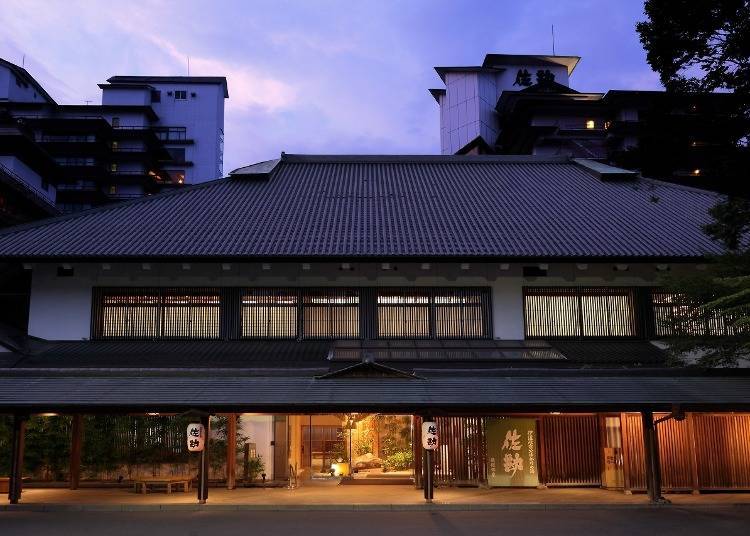 Sendai Akiu Hot Spring HOTEL SAKAN’s claim to fame is as the bath palace of Date Masamune, the Sendai feudal lord. With the concept of “service from the heart that touches the core of yours”, it’s a hotel with unparalleled service. 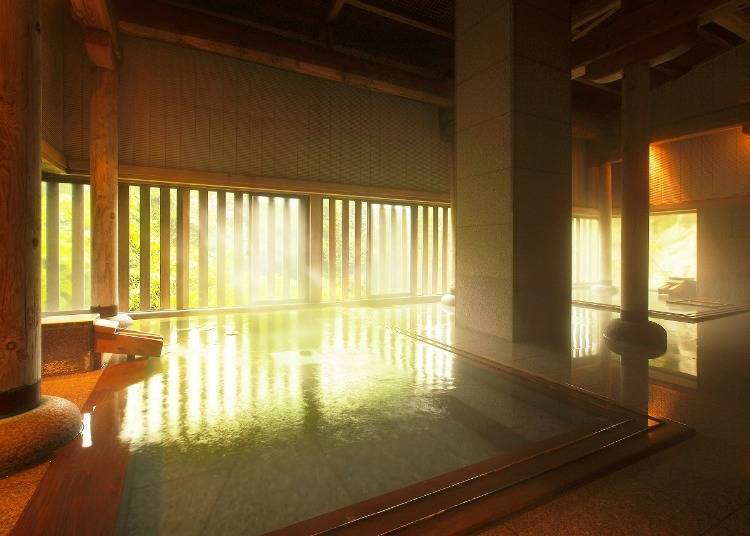 Including reservation-only baths, there are a total of five hot springs available. As we leave the corridor surrounded by an abundance of nature, we head towards one of the hot springs, the “Natori-no-Miyu.” Inside the bathing area, the latticework lets in natural sunlight, so that despite being an indoor bath, it has an open-air atmosphere. 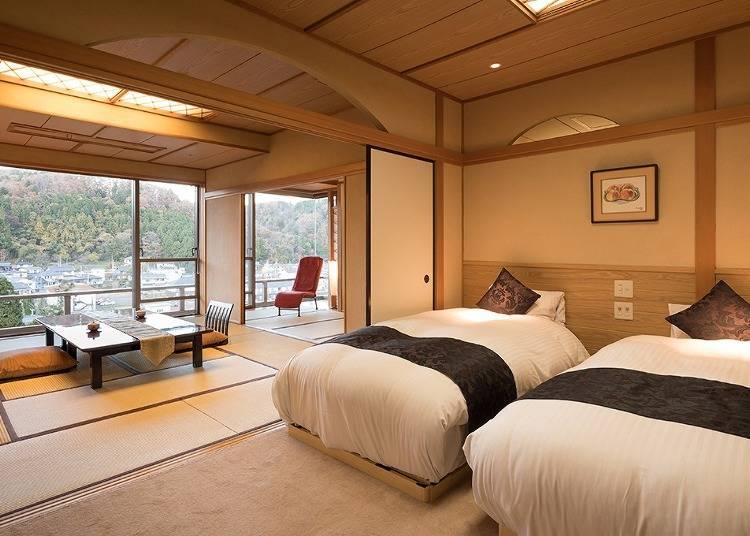 Guest rooms are available in Japanese and Western styles. There’s a wide variety available, including some with attached open-air baths. Amongst these, there are rooms with their own rooftop gardens and terraces and even a high-grade room with its own viewing path made of cypress! For guest rooms that come with beds, besides the business type rooms, they are furnished with 120-centimeter-long twin beds, so that you can rest and relax completely. 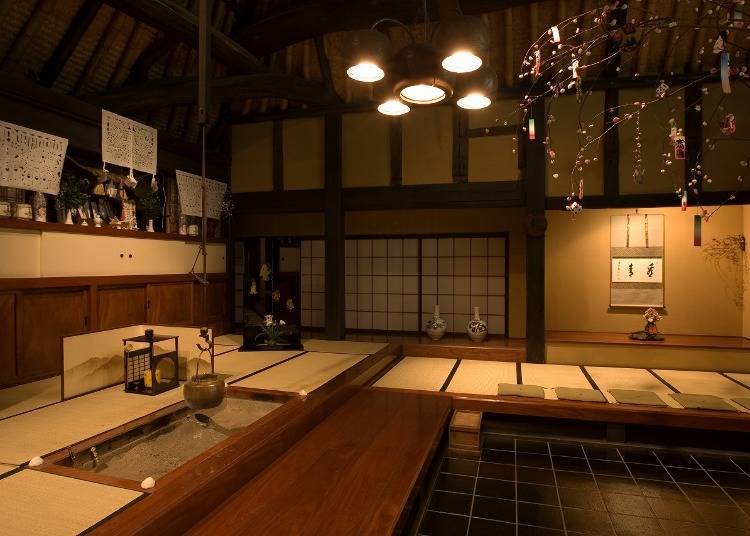 Sakan is outfitted with measures to prevent the spread of Covid-19, including temperature-taking at the ryokan’s entrance and alcohol dispensers placed throughout the hotel, as well as limits on the number of people in elevators.
The homepage is also available in Japanese, English, Chinese, and Thai. Reservations can be made via the home page. 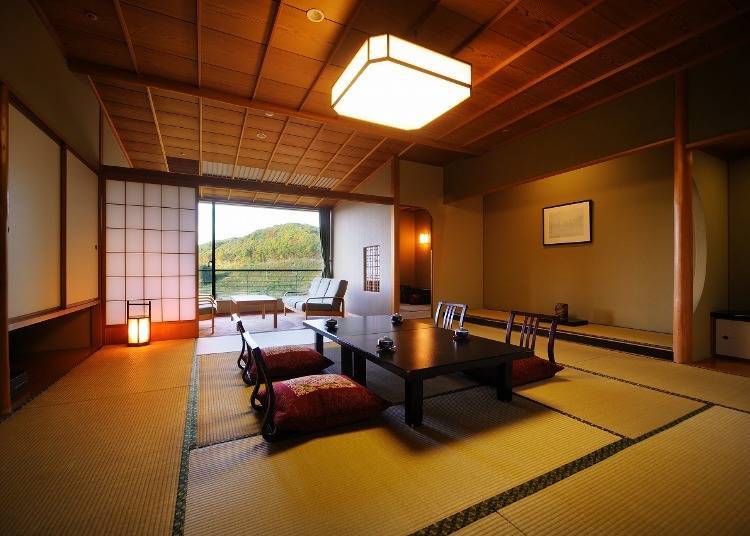 Sendai Akiu Onsen Hotel Zuiho is an onsen hotel built to overlook the river flowing at one of Akiu Onsen’s famous sightseeing spots, the Rairaikyō gorge. From the coffee lounge in the lobby, which faces a lush green bamboo forest, to the waterfall feature with koi fish in front of the bathhouse, this is one hotel with many sights to see. This place is recommended for those looking for a luxurious atmosphere during their stay.

A wide variety of guest rooms are available, ranging from simple and elegant designs, to sprawling Japanese-style rooms and Western-style rooms furnished with Simmons beds, and hybrid Japanese and Western rooms. There are also rooms which oversee Rairaikyō gorge directly, and other rooms which overlook the streets of Akiu, and the choice of rooms available is another draw of this place. 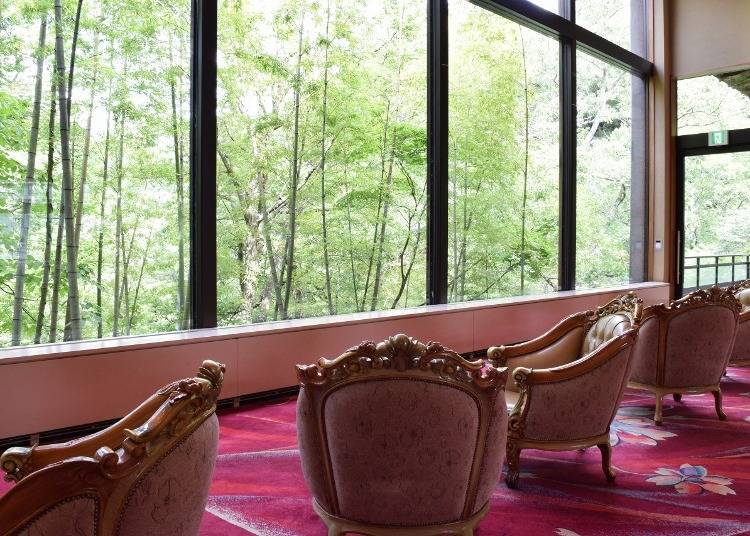 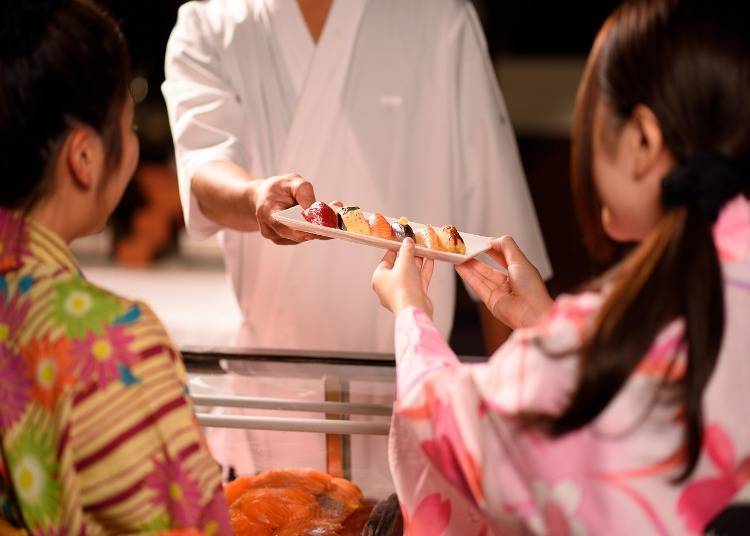 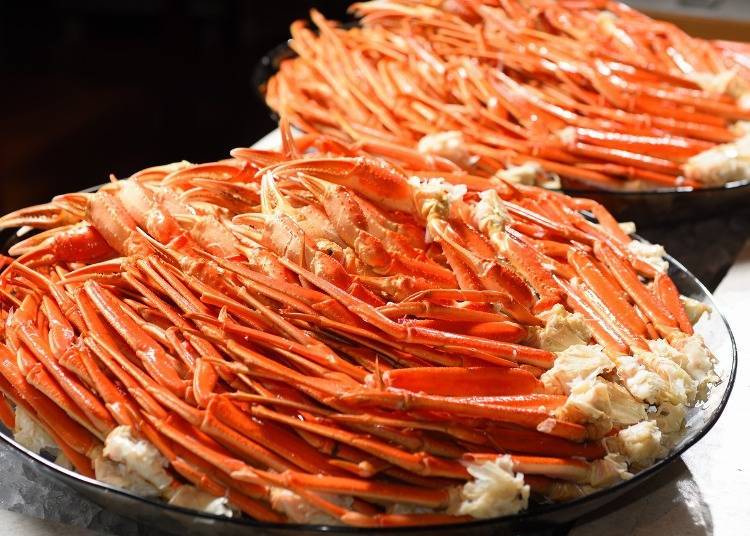 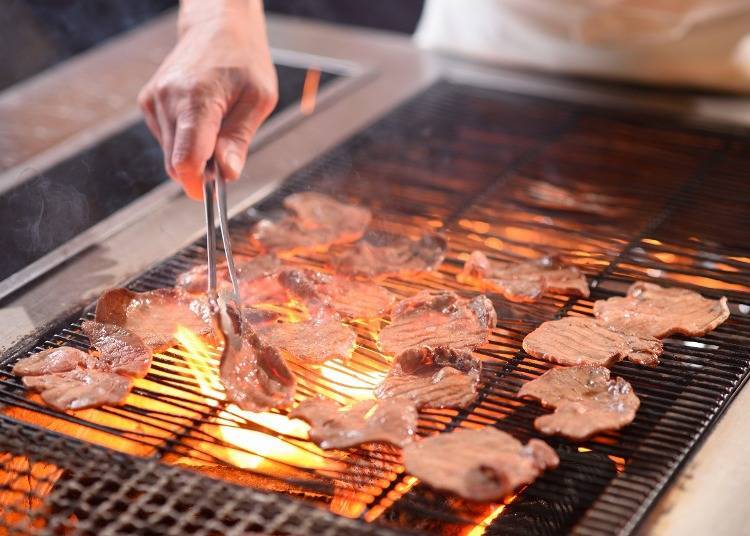 From plump crabs to one of Sendai’s specialty dishes, beef tongue, to fresh sushi from off the Sanriku coast of Miyagi Prefecture, the resplendent menu caters to those who are uneasy with eating Japanese food as well. Savor the delicious dishes that the chefs prepare right before your eyes. 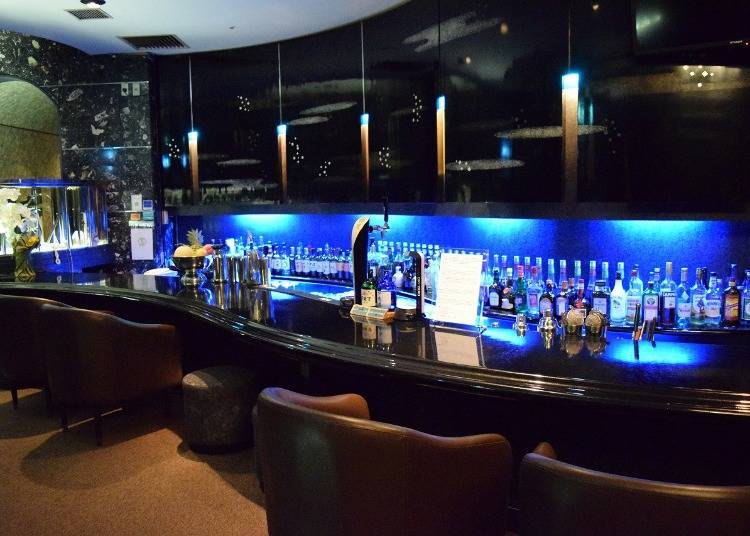 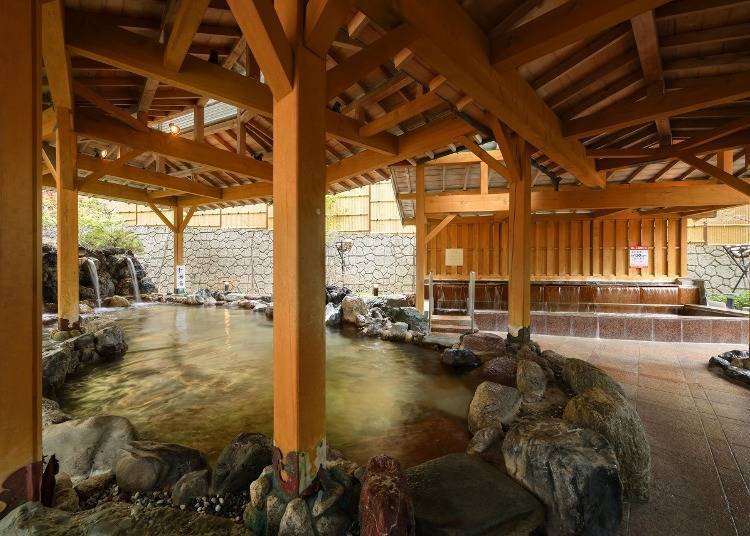 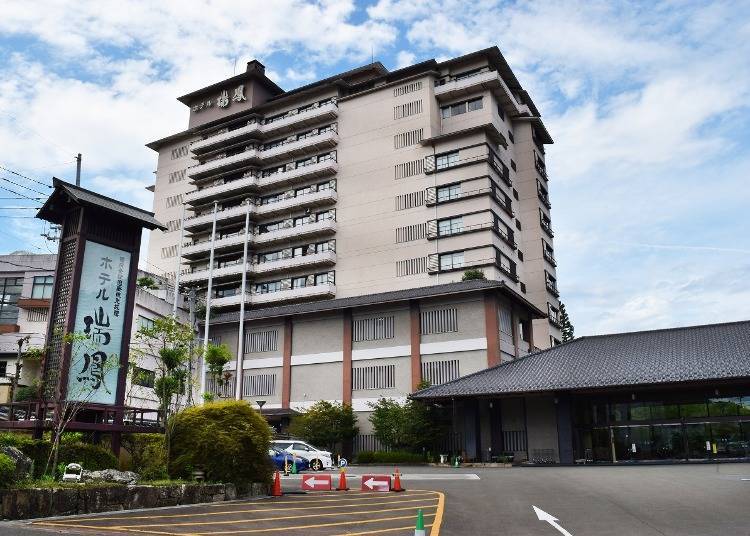 One of the strong points of this hotel is that there are staff available who can speak both English and Chinese. On top of this, the hotel has taken measures to prevent the spread of Covid-19, including providing alcohol disinfectant throughout the hotel and mandating the use of masks while in the hotel. Some of the facilities have also had their operating hours changed, so do check the details beforehand. 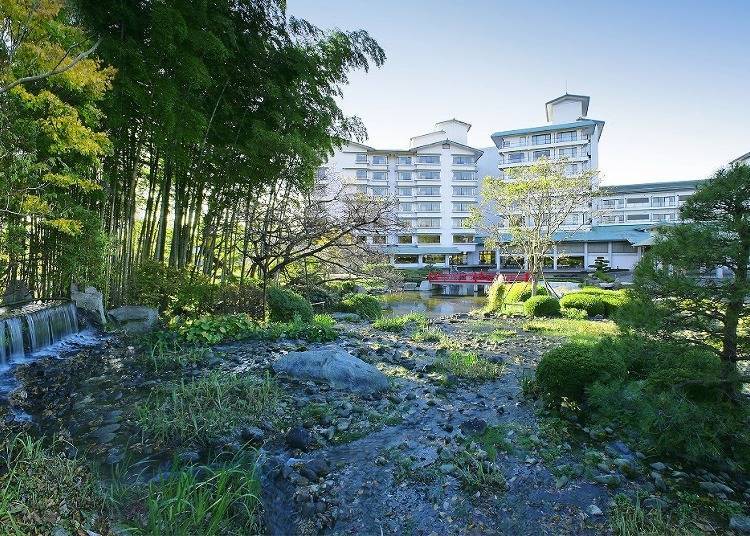 Kagaribi-no-Yu Ryokusuitei has a highly acclaimed Japanese garden and an open-air bath. It’s 50 minutes by bus from JR Sendai Station. There is a free shuttle bus service (reservations required) that runs from the east exit of JR Sendai Station too. As a shuttle bus for guests on day trips is available, feel free to visit the place at your leisure. 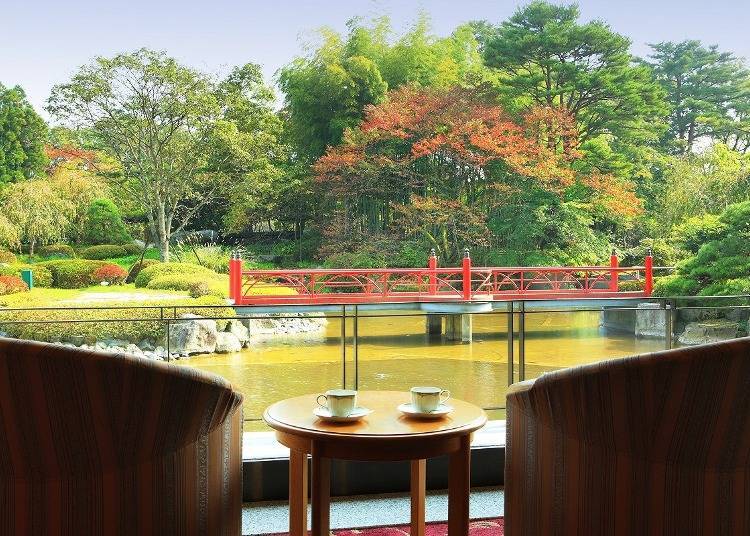 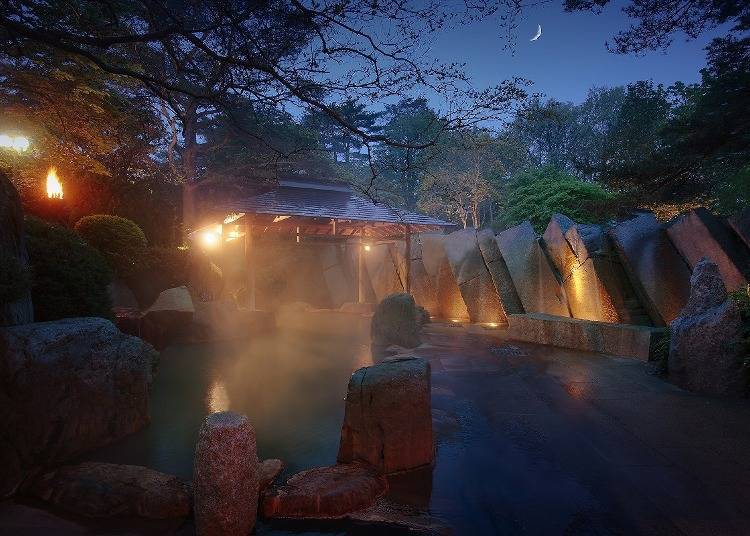 The open-air bath, the “Kagaribi-no-Yu”, is made of a dynamic setup of stones. Though it looks stunning even during the day, going at night is highly recommended. With the moonlight shining down on the bath lit by torches, the elegant space seems to expand in size. The fires are lit from sundown until midnight. In the open-air bath that changes character throughout the day, you can relax both your body and soul. 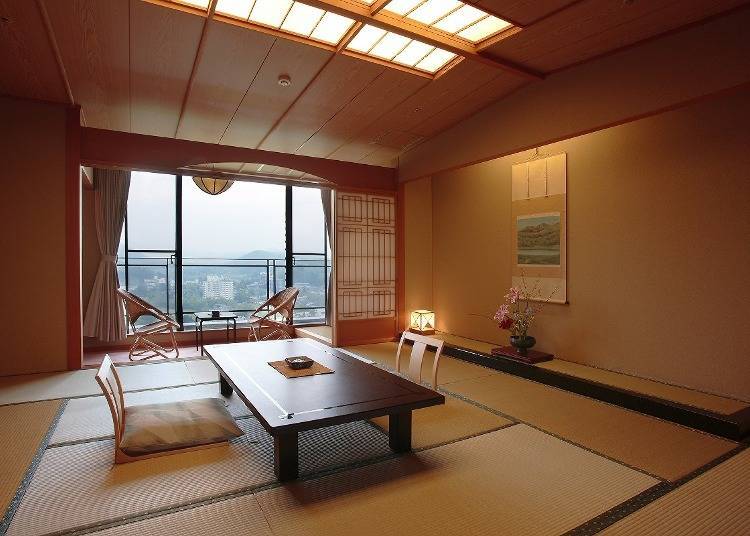 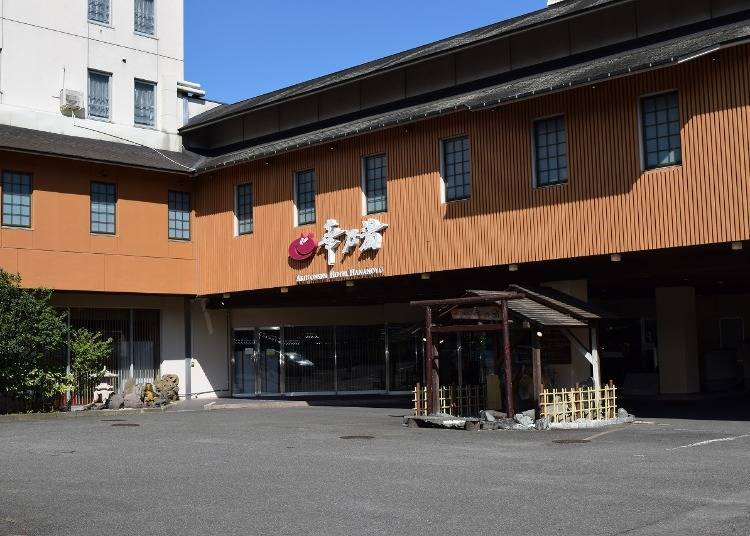 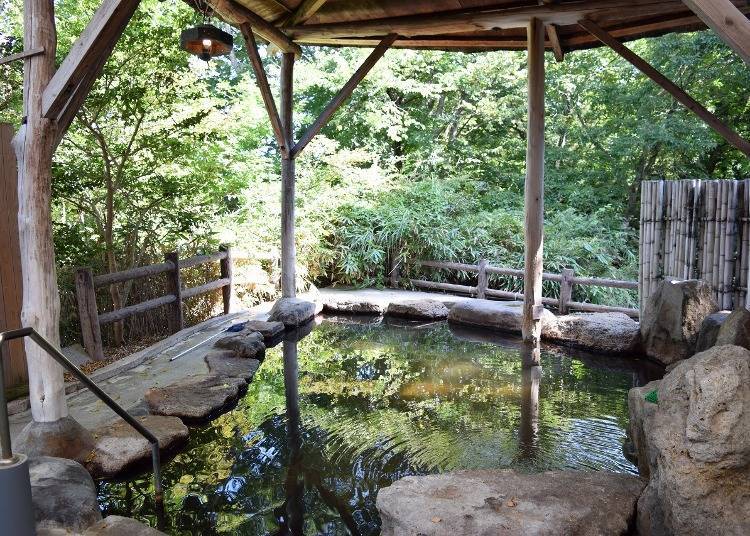 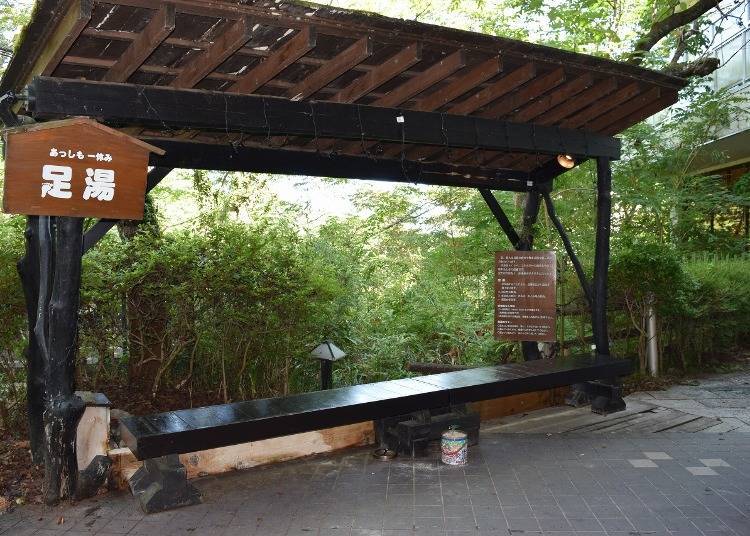 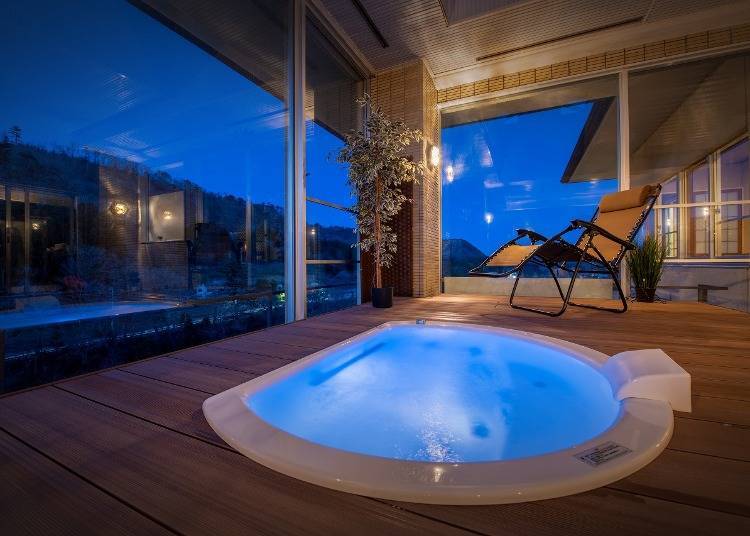 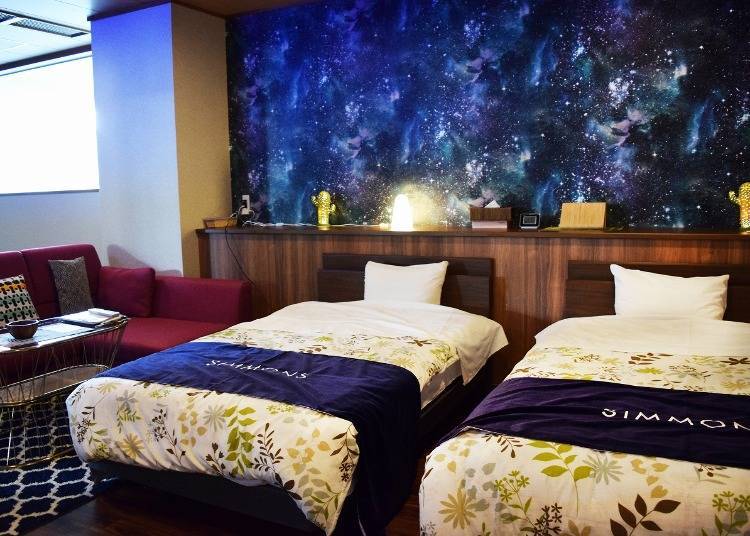 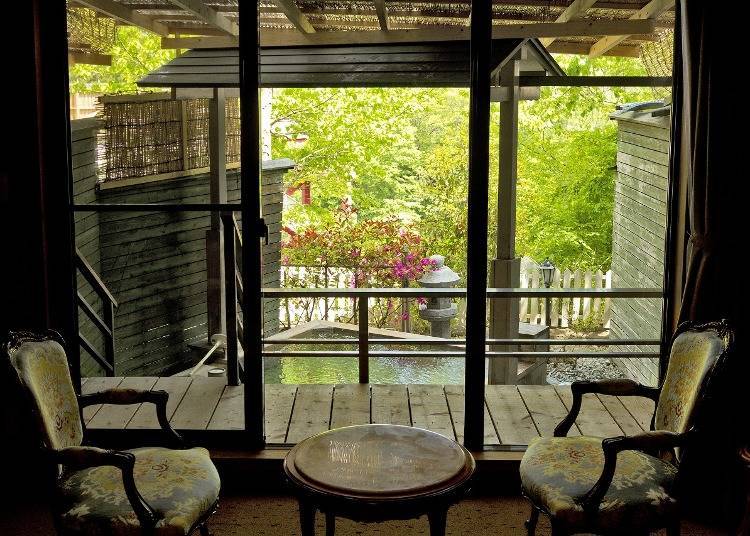 To prevent the spread of Covid-19, masks are required to be worn and your temperature taken before entering the hotel, and alcohol disinfectant is provided as well. Besides this, for those who wish to have their dinner and breakfast buffet in their own rooms, special crockery and containers are provided. If you would like to use it, feel free to check with the staff. 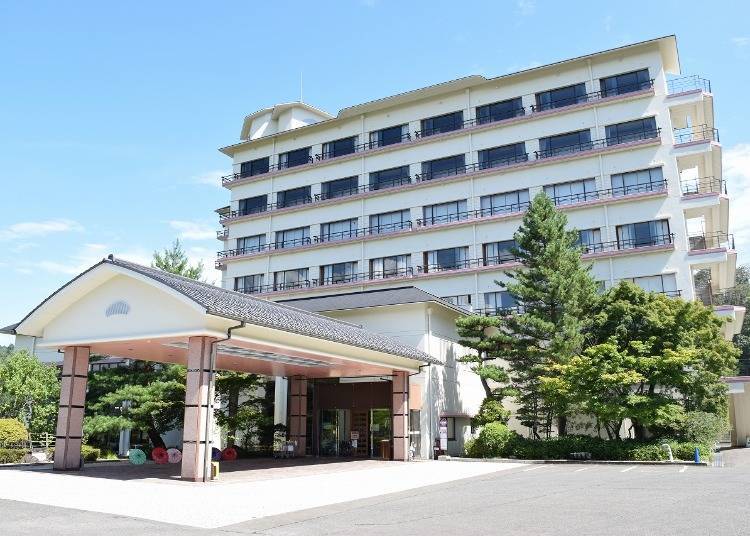 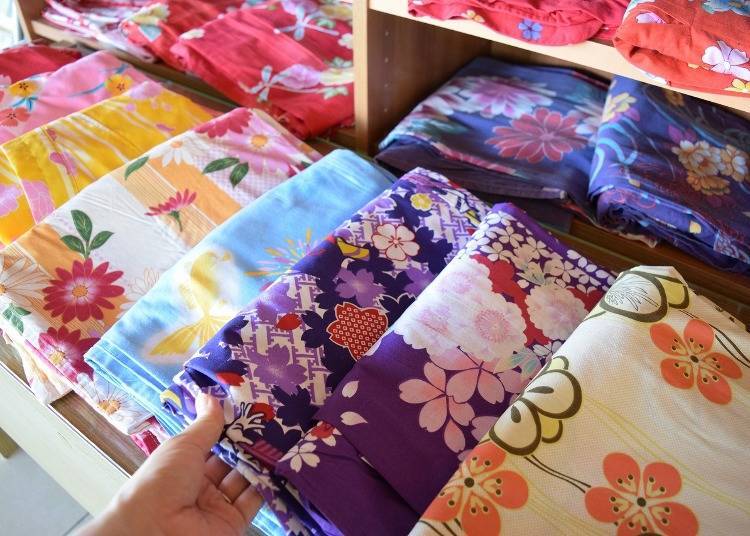 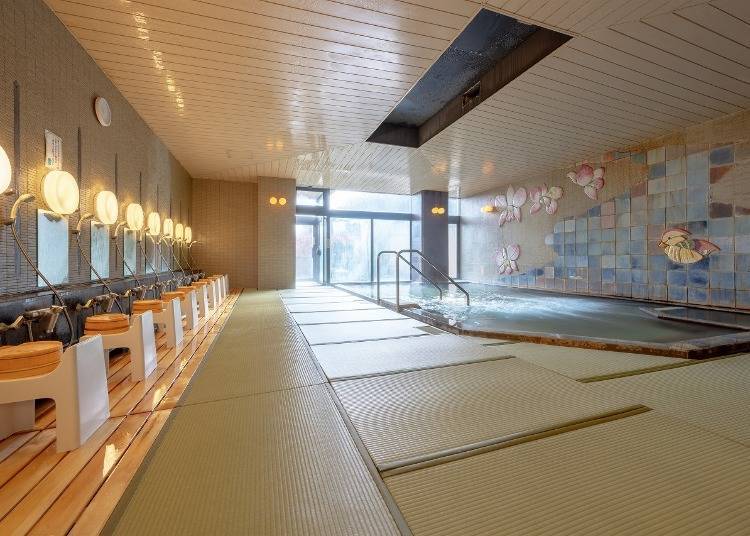 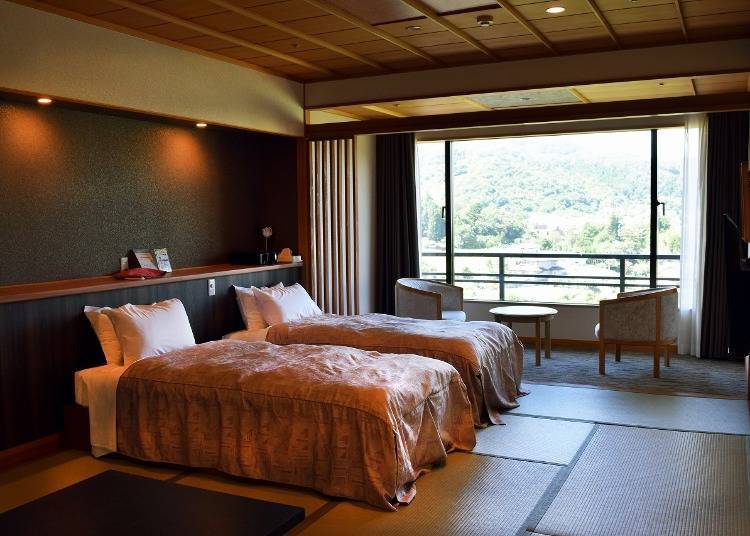 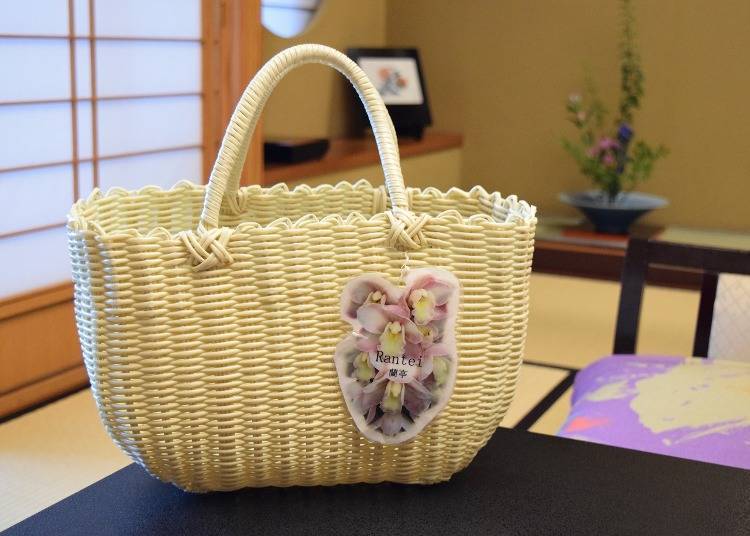 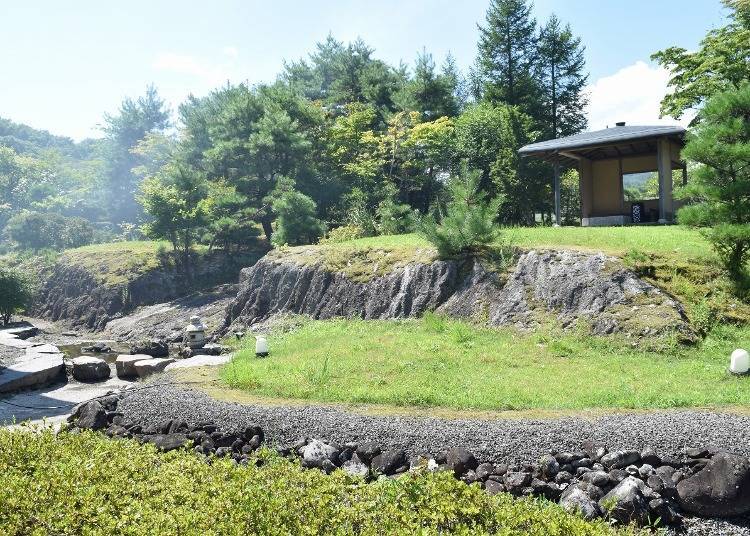 Akiu Onsen Adventure: ‘Terroage’ Will Redefine Tourism to Miyagi and Beyond
*This information is from the time of this article's publication.
*Prices and options mentioned are subject to change.
*Unless stated otherwise, all prices include tax.