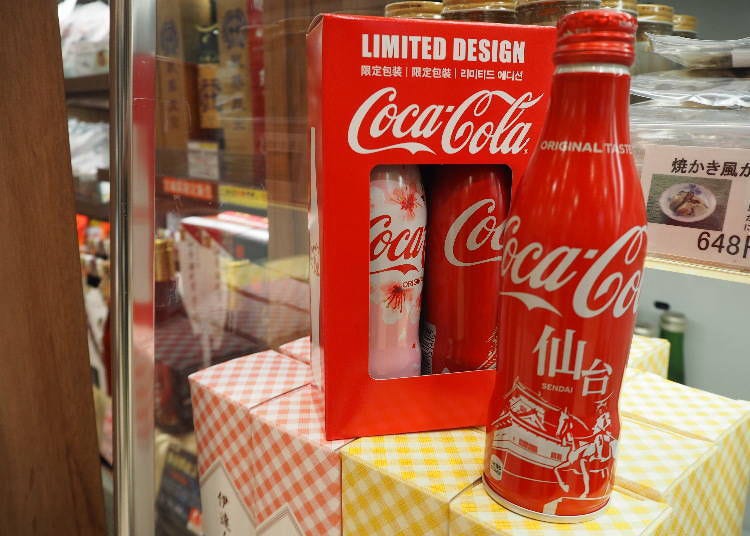 Many of the best Sendai souvenirs can be found right at the JR Sendai Station gift shop! Omiyage Dokoro No. 3 curates a collection of the finest souvenirs from around the greater Sendai area.

There are all sorts of souvenirs in Sendai Station just perfect as gifts for family and friends, not to mention as memories of one’s trip. But as there are so many different types to be found, deciding which ones to get can be a challenge.

To help us with that we asked Omiyage Dokoro No. 3 staff what have been their most popular Sendai souvenirs. 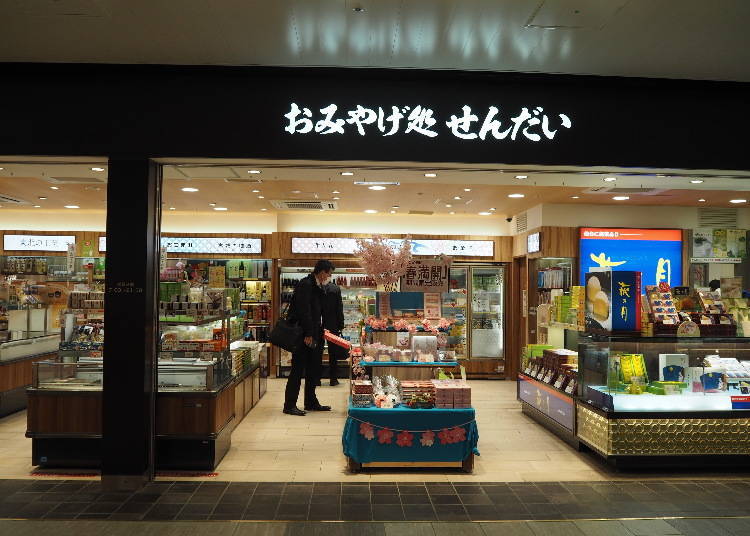 Omiyage Dokoro No. 3 is located on the second floor of Sendai Station, just outside the central ticket gates of the JR lines and the Sendai City Tourist Information Center is nearby. The staff are incredibly friendly and happy to help when you're looking for a particular item. Without further ado, let's see what those 20 most popular items are ranked in reverse order. 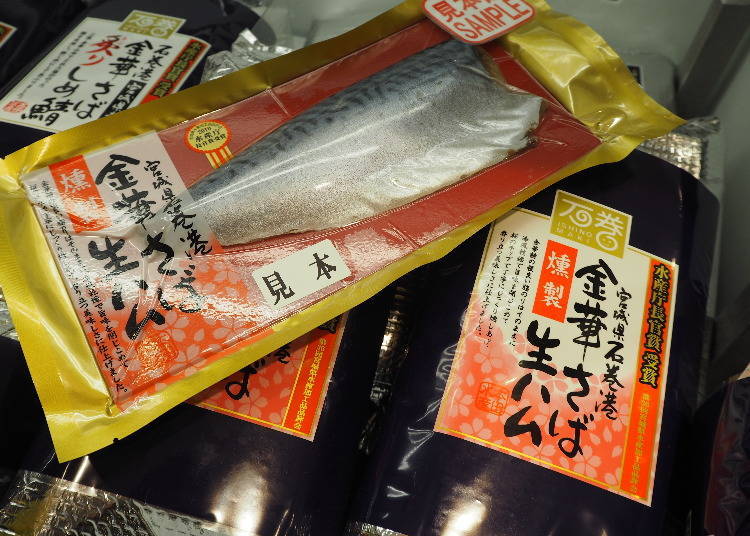 Kinka mackerel dry-cured ham caught at Ishinomaki Port, Miyagi Prefecture. The flavor and aroma of the Kinka mackerel is brought out by smoking it with chips of cherry wood. In 2010 it also received the Fisheries Agency Commissioner Award. The best way to enjoy it is to cut it into thin slices like dry-cured ham. 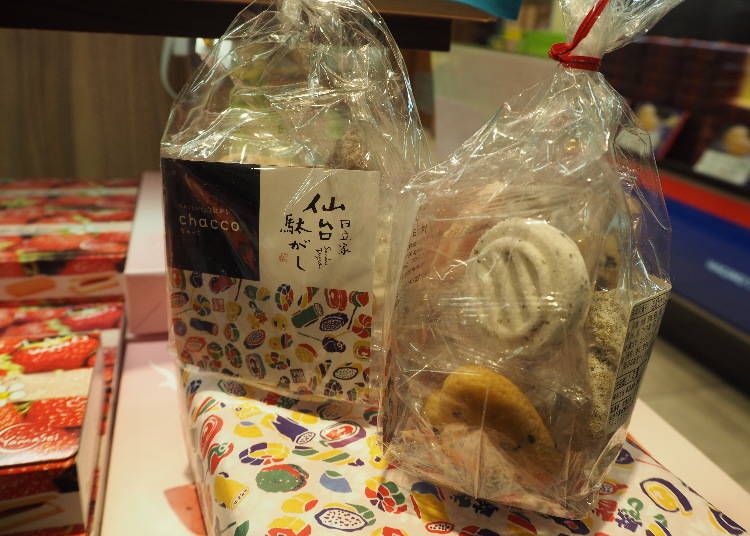 This traditional Sendai candy is packed in a slightly smaller size than usual. The assortment of candy consists of the 10 types described below. These cute candies are delicious and remind one of the good old days. In addition to the bag containing 12, there is also a large one containing 24 Chacco Balls (1,500 yen).

The 10 types of candy
・ Kuropan: candy having a slightly solid texture and mild sweetness of brown sugar
・ Tsukinowa: mysterious moon-shaped sweets made from glutinous rice and brown sugar having a sticky texture
・ Shiogama: pressed candies made from glutinous rice with a delicious shiso [Japanese basil] flavor
・ Ankodama: a mildly sweet candy made from red bean paste rolled into a ball
・ Umeboshi: cute plum-flavored sweets in the shape of umeboshi [salted plum]
・ Hakkato: candy with a refreshing mint flavor
・ Wakakusa Nejiri: confectionery with a delicious mugwort flavor and crispy texture
・ Mugikogashi: a not-too-sweet fragrant candy made with flour
・ Kinako Nejiri: "twisted" sweets made from kinako [roasted soybean flour], glucose syrup, and sugar
・ Misopan: fragrant baked sweets made with Sendai miso 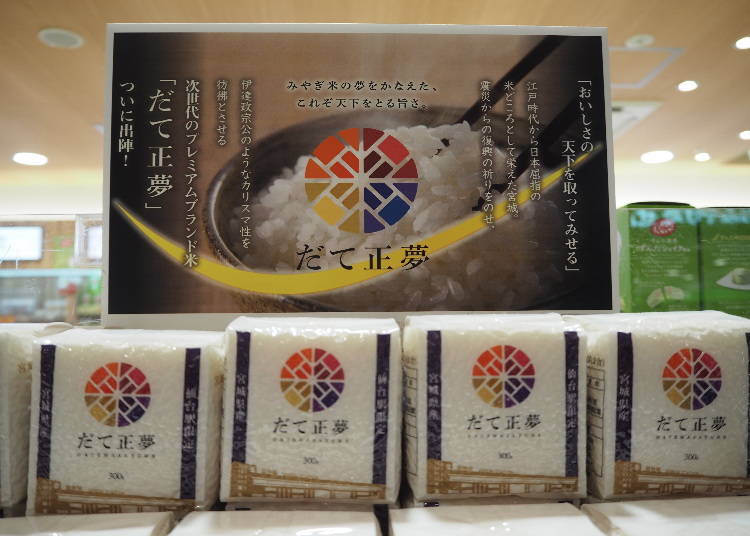 Date Masayume is the newest premium rice brand and the pride of Sendai, made available in this convenient 300-gram package. The handsome, square package makes this the perfect size for a souvenir. This rice is noted for its outstanding sweet flavor and chewy texture and is one that you really should try. 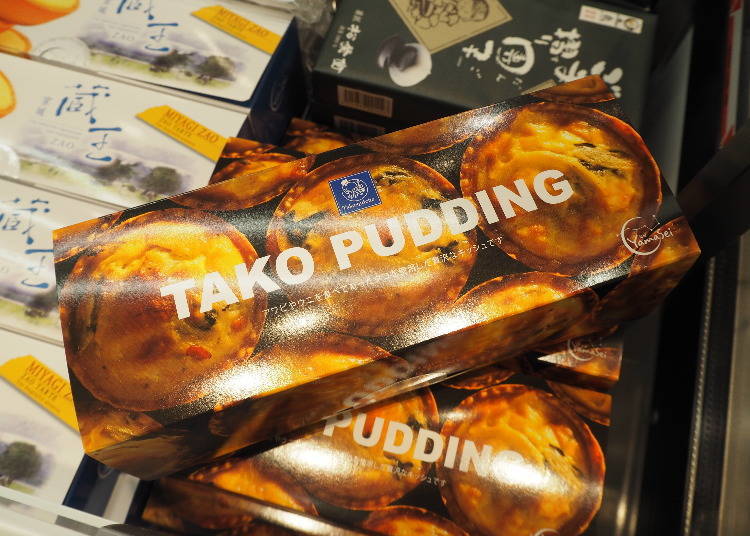 A quiche (pudding) made from delicious seafood and pride of the Sanriku region in Miyagi Prefecture. This delicacy is comprised of Minami Sanriku octopus that has been fattened up on abalone and sea urchin, seasonal vegetables, milk, and yukishio - literally "snow salt” - which is a powdered form of salt full of minerals. 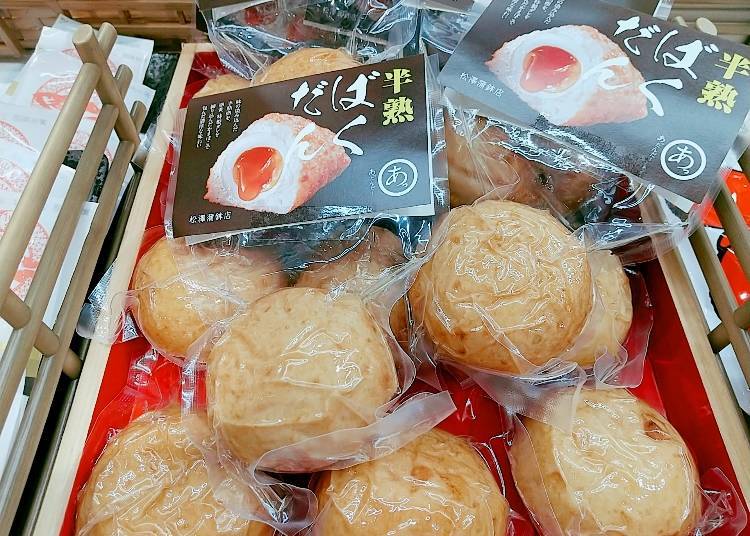 This Sendai souvenir is made by Matsuzawa, a long-established Sendai kamaboko [processed fish paste] shop founded 109 years ago. It is uniquely different from other similar products in Japan in that there is a soft-boiled egg inside it. The soft egg yolk oozes out when you bite into the kamaboko. The specially made sauce that comes with it is of course very delicious. 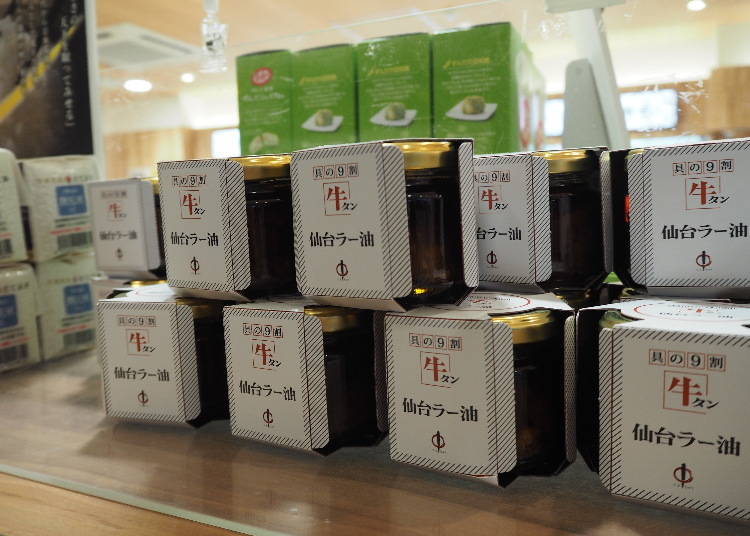 This is a very popular Sendai souvenir that has often been mentioned in the media. When Sendai is mentioned naturally gyutan beef tongue comes to mind! That’s the image most people have. The spiciness of the chili oil is infused with the savory flavor of beef tongue and when put on freshly steamed rice you won't be able to put down your chopsticks. 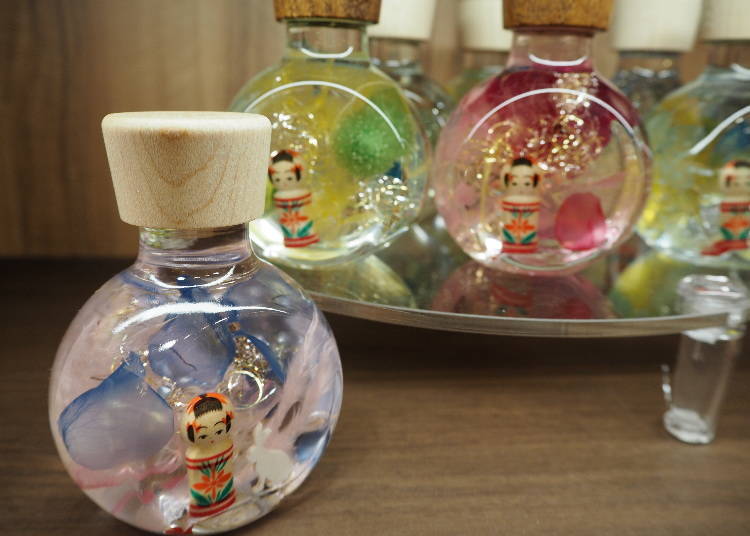 A traditional Miyagi kokeshi doll is enclosed in a "Herbarium", dry flowers preserved in a bottle of oil, that is a popular interior decor item. The herbarium comes in a wide variety of colors, such as blue, red, and yellow. These are made by a woman from Naruko, which is famous for kokeshi, and embody that spirit. 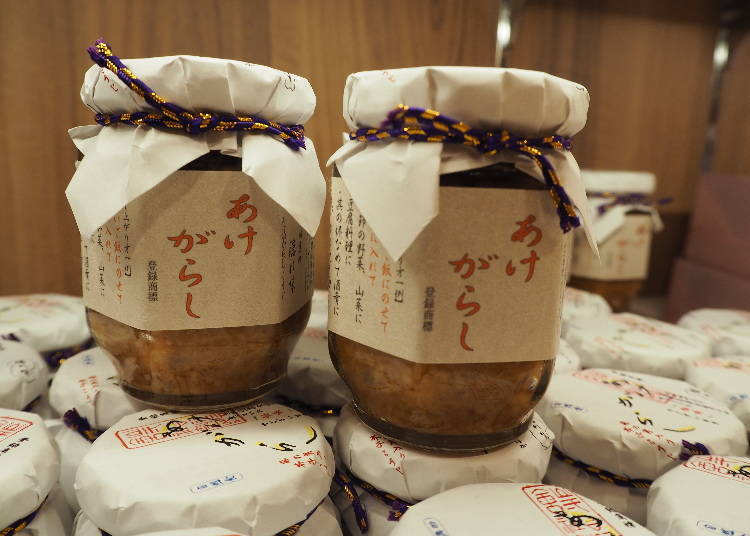 An excellent Yamagata dish that can be purchased only at this store in Sendai Station. Made from rice malt, mustard, soy sauce, chili peppers, hemp seeds, and brown sugar, akegarashi is perfect for hot steamed rice, fish, meat, vegetables, natto, and the like. The red pepper gives a spicy kick to the savory flavor of the soy sauce and rice. Many people say that once you try it you will always be coming back for more! 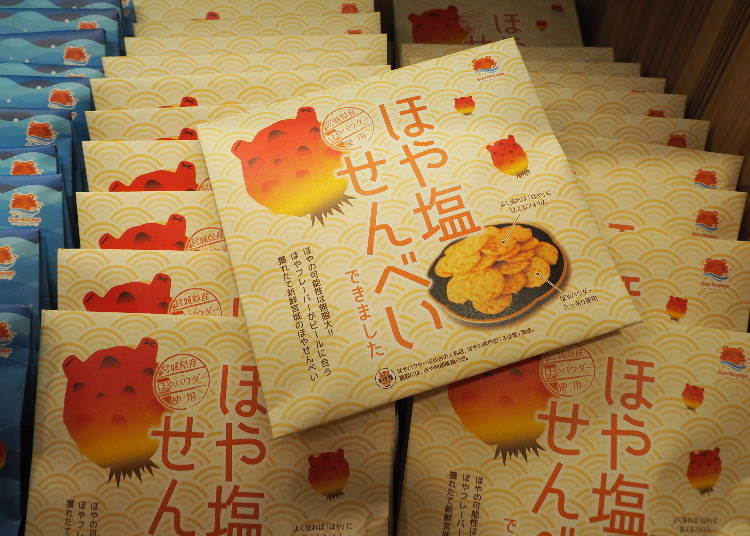 Hoya [sea squirt] is popular among locals as a side dish for sake in Miyagi Prefecture, especially in the Sanriku region. Sea squirt, which is not often found outside the prefecture, have been transformed into salty rice crackers. These go really well with beer! They may look like typical rice crackers, but in a way, they also resemble sea squirts. 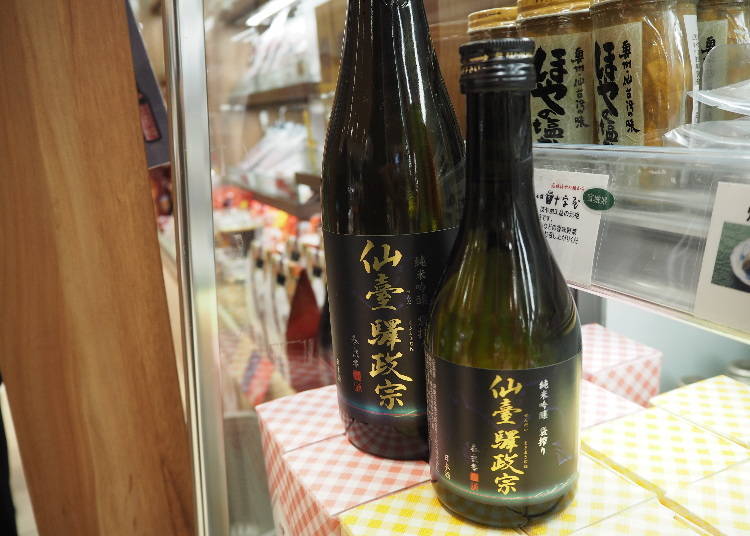 If you like sake then you will definitely like this high-quality sake with no added alcohol. This Sendai junmaiginjo Japanese sake is only available here in Sendai Station. In addition to the 720 ml size it also comes in a 300 ml bottle (865 yen) which is perfect for one person. This dry Japanese sake is made with Hitomebore rice grown in Sendai and has a rich bouquet. 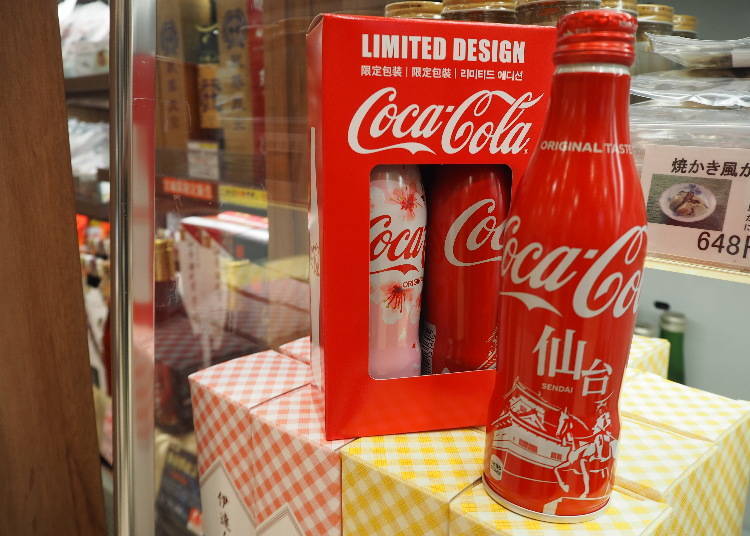 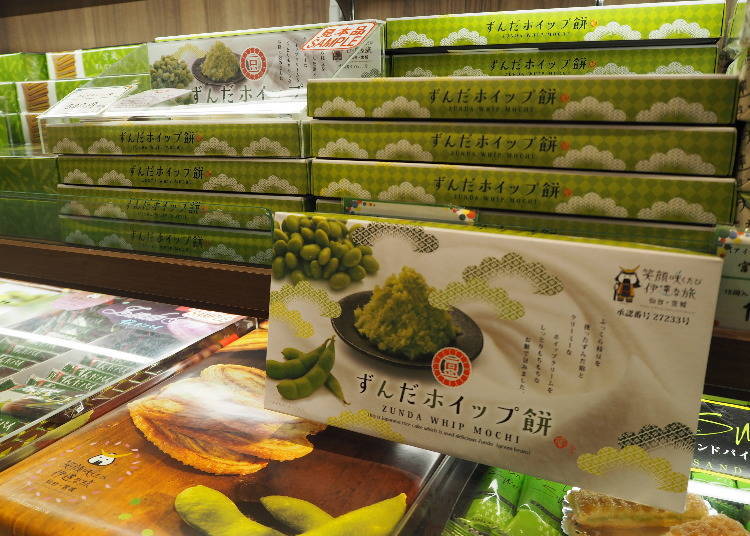 This confection is an exquisite combination of zunda-an [sweet soybean paste] and whipped cream wrapped in chewy rice cake. Zunda mochi is a popular local sweet in Miyagi prefecture, but in this Sendai souvenir, you can discover what makes this zunda unlike any other. 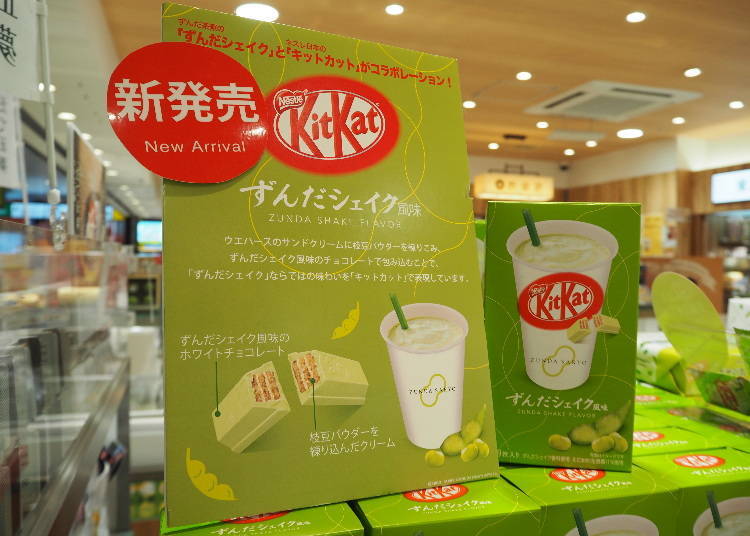 Zunda Saryo's original Zunda Shake is made in collaboration with Nestlé Japan's KitKat! Not only the Zunda Shake flavored chocolate, but also the crisp texture of the delicious wafers are thoroughly mixed with edamame powder. Those who like KitKat and zunda will especially like this product. 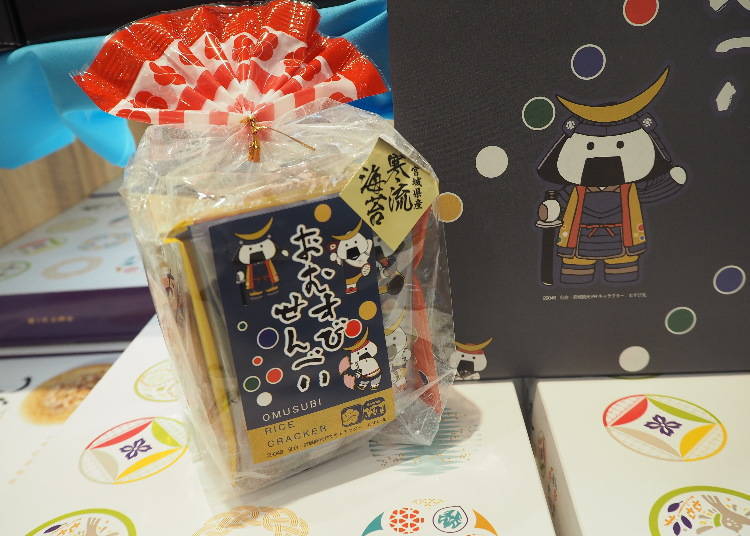 The package showing the Sendai mascot Musubi Maru is very popular! Using cold-current seaweed from Miyagi prefecture, the rice crackers look like rice balls. A box of 27 pieces (994 yen) that can be shared by many people is also available, and the wrapping paper with the Musubi Maru drawn on it is also cute. 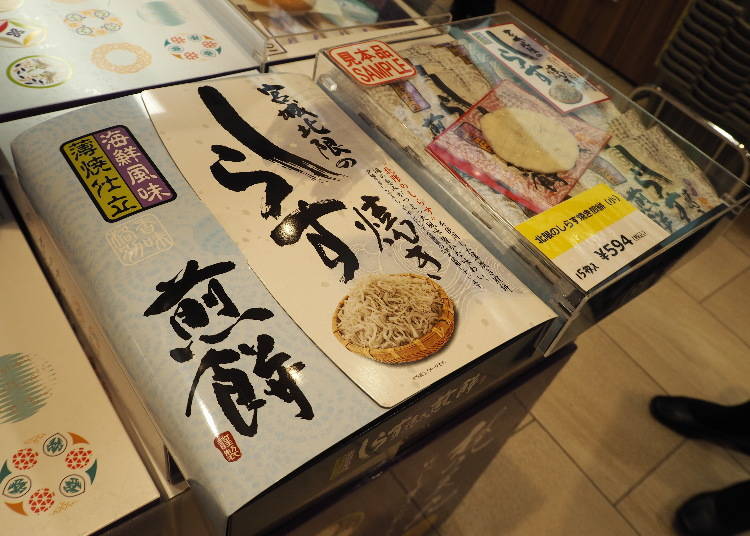 Thin grilled rice crackers using Northern Whitebait, which is a special product of Natori City, Miyagi Prefecture. These savory rice crackers are chock-full of the flavor of seafood. This is a good Sendai souvenir to give to fellow workers and friends because they are individually packaged. 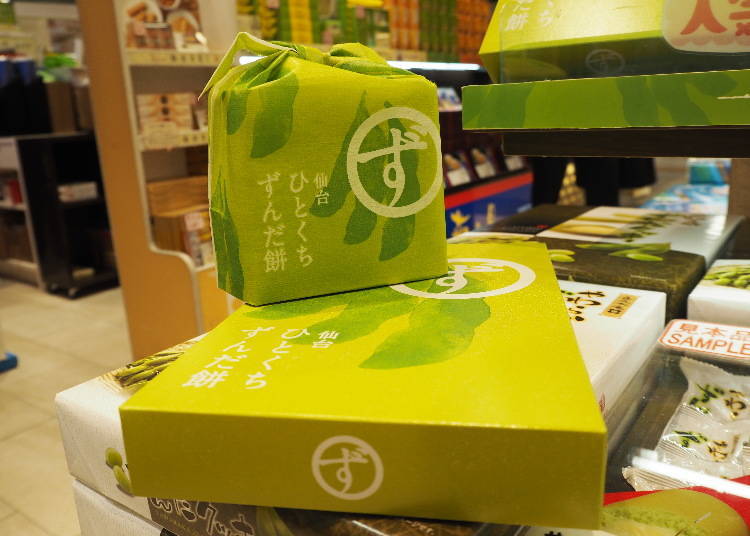 Zunda Mochi is a local Miyagi dish in which sweet soybean paste is wrapped in rice cake. These bite-sized portions are perfect for easily enjoying the delicious flavor of this product. These delightful zunda-colored packages come in compact bags of 4 or boxes of 8 (1,080 yen). 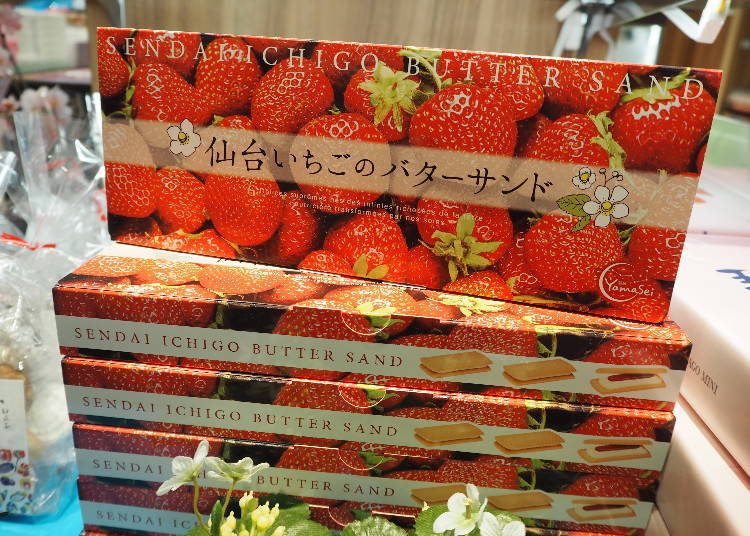 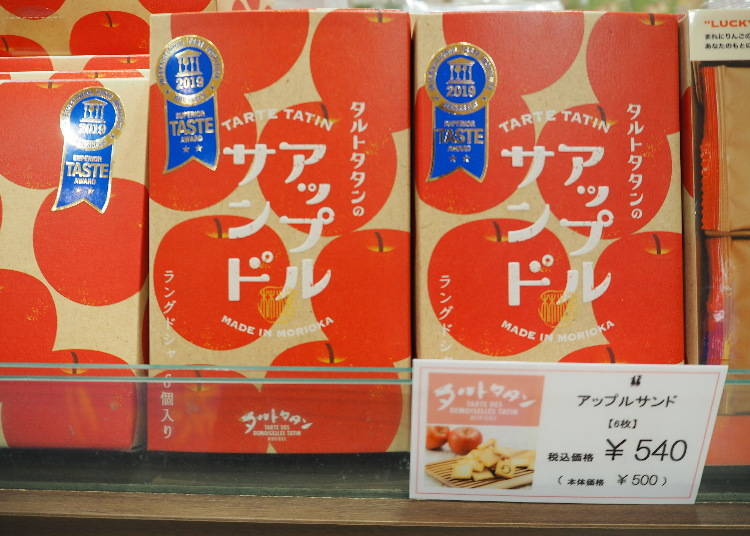 This delightful and delicious confection has a crisp texture. In 2019 it also won the iTQi (International Taste Institute) Superior Taste Award. Ground salt from Miyagi Prefecture gives it a subtle flavor. We recommend the box of 12 (1,080 yen) so that you can share it with several friends. 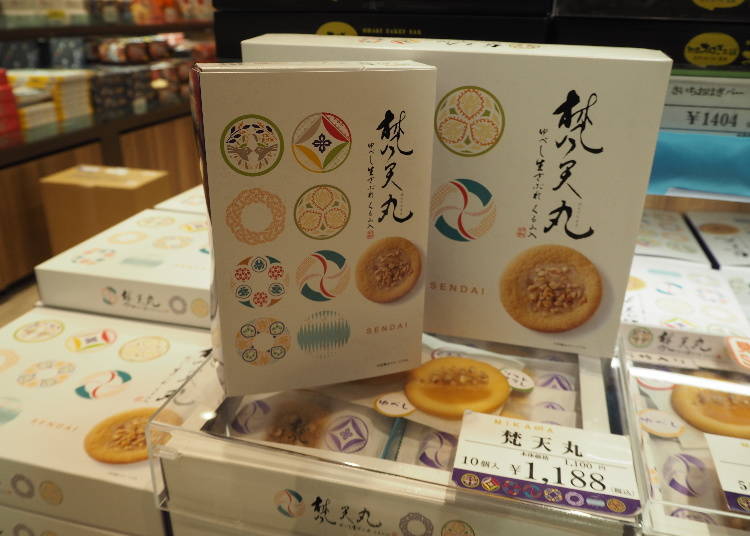 Sweet yuzu-flavored steamed dumpling sablé with walnuts. Sweet yuzu-flavored steamed dumplings are one of the famous confections of Sendai. The product name Bontenmaru is derived from the childhood name of Date Masamune, the first feudal lord of the Sendai clan. This is one of the ultimate Sendai souvenirs. They can be bought individually or in boxes of 5 (594 yen) and boxes of 10 (1,188 yen). 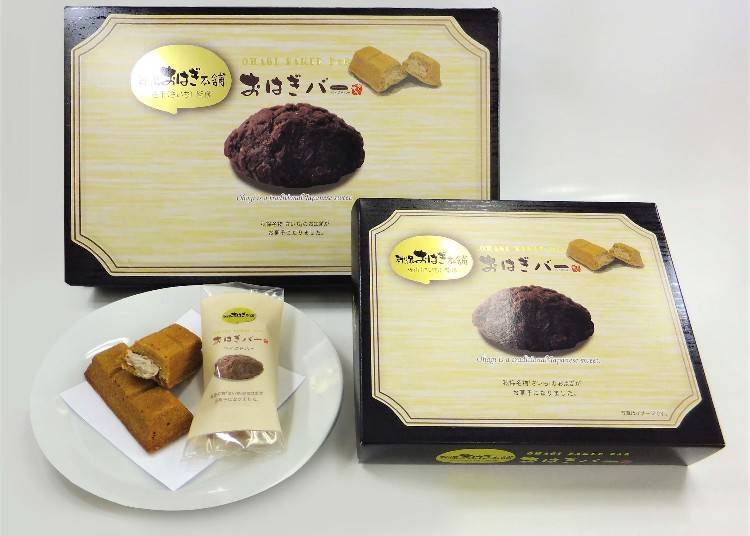 This confection made with ohagi, pounded rice covered with bean paste, is the most popular of all. The flavor of ohagi, the famous product of Akiu, noted for its hot springs, is found in this confection. This baked confection is inspired by Saichi Ohagi and is noted for the crisp texture of the dough. The inside contains chocolate bean jam. There is also a box of 10 selling for 1,404 yen.

You can buy many kinds of Sendai souvenirs at JR Sendai Station!

Not only confectionery, but also sake, drinks, and even interior and many other kinds of items make great Sendai souvenirs. You can actually buy a wide variety of gifts in Sendai Station. Whether for friends, family, or yourself, there are so many products from which to choose, deciding what to buy can be a challenge.

If you find that to be the case, then hopefully the above list of popularly ranked Sendai souvenirs will be of help. Even after you have left Sendai, looking at and eating the souvenirs you brought back will remind you of your trip.