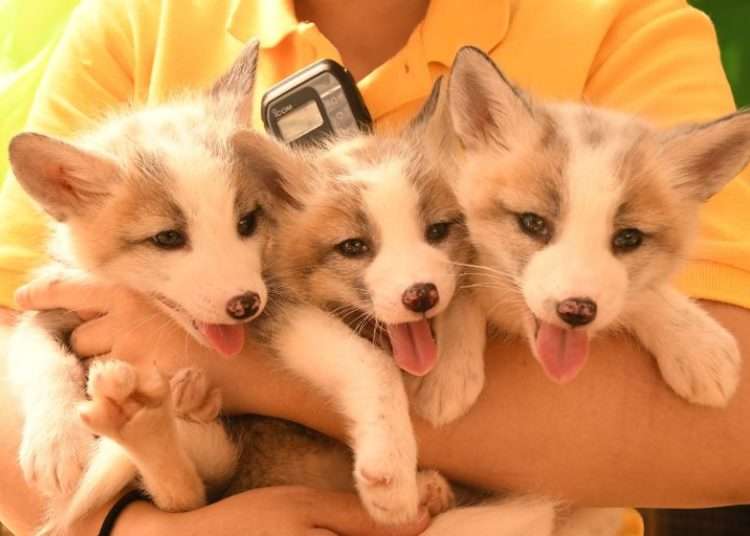 Zao Fox Village is a place surrounded by nature with more than 100 roaming foxes waiting to welcome you.

In the last couple of years, the number of foreigners visiting this place has been increasing. It all started from a picture from a Social Network. From autumn to winter, the foxes’ fur becomes fluffy making it into the best time for visiting the place and taking pictures of them.

Where is Zao Fox Village? 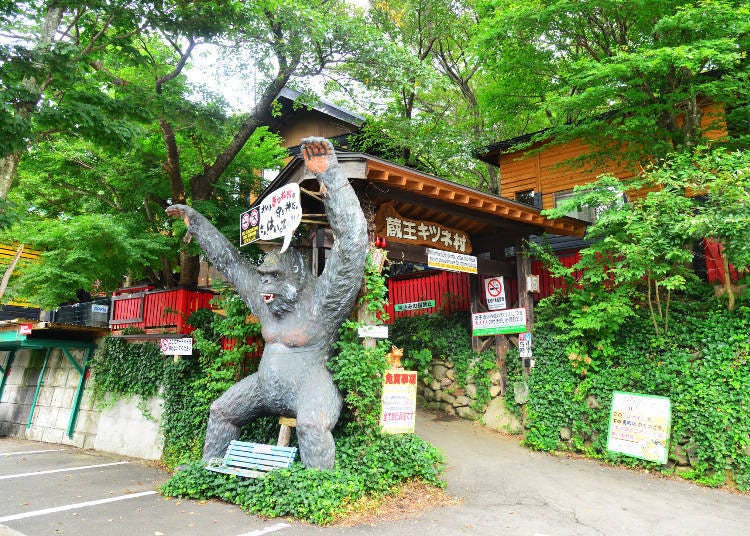 Zao Fox Village is located in Zao Sanroku, Shiroishi City, Miyagi Prefecture. The city is in the southern part of Tohoku, and it takes about 1 hour and 50 minutes by Tohoku Shinkansen from Tokyo Station to Shiroishizao Station.

From the station to the village it takes 20 minutes and about 4,000 yen by taxi. Nonetheless, it is recommended to visit the fox village by car, from the Joban Expressway the Shiroishi IC exit is the most convenient one to reach it.

The number of visitors from abroad has been increasing rapidly in recent years and has become a sightseeing spot. A lot of visitors take many pictures touching or holding the cute Japanese foxes and spread throughout the world through Facebook, Twitter, and Instagram.

It makes more and more people, especially from abroad, to want to visit the place. According to statistics from 2015, about 10% of the 100,000 visitors that year were from abroad, and this number has been rising.

If you are going from Sendai, we recommend taking the JR Tohoku Sightseeing bus with the "Miyagi Zao Fox Village" route. It is very convenient as it departs from the east exit of JR Sendai Station and goes straight to Zao Fox Village. Operates on specific days from Saturday, January 11 to Sunday, March 22, 2020.

Additional details (in Japanese only) are also provided at https://www.jrbustohoku.co.jp/teikikanko20191201.

First read the cautions, and then let’s meet the foxes! 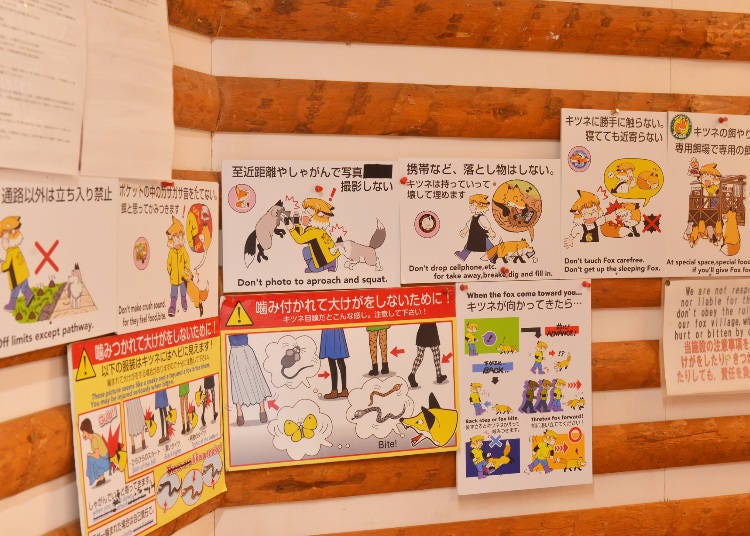 There is a hallway between the reception and the gate. In the hallway, some cautionary statements are hanging on the wall which say, “Off limits except pathway”, ”Do not make a sound inside the pockets”, ”Do not take photos crouching down”, ”Do not drop anything”, ”Do not touch the fox on your own”, and ”Do not feed the fox anywhere”.

Other than that, there is much more on the walls. Those statements are following the habits of foxes. Therefore, make sure you read the statements well not to get bitten nor scratched by them. It is also written in English to makes you feel safe.

Japanese foxes are relaxing around the park 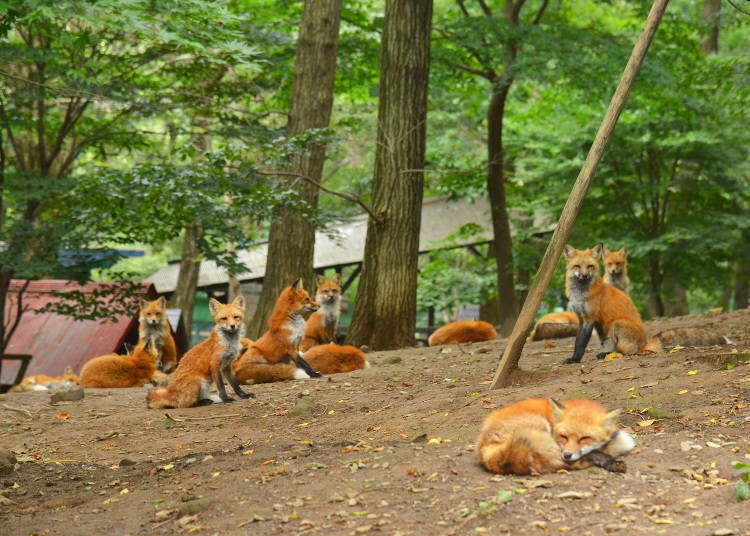 When you pass through the gate, the foxes’ paradise spreads out before you. In the little square using the slopes of the hills, you could see that some foxes are sleeping, and other ones are playing with each other.

Usually, visitors are only available to pass through the maintained pathway, but not where the foxes are sleeping or playing.

Some foxes are sleeping in the pathway or cross the path. But if you take pictures crouching down or touch them, they might run up and go on the defensive—this a key caution to mind when enjoying seeing and taking pictures of them. For an extra charge, visitors could pet one of the foxes, and hold them on their laps. 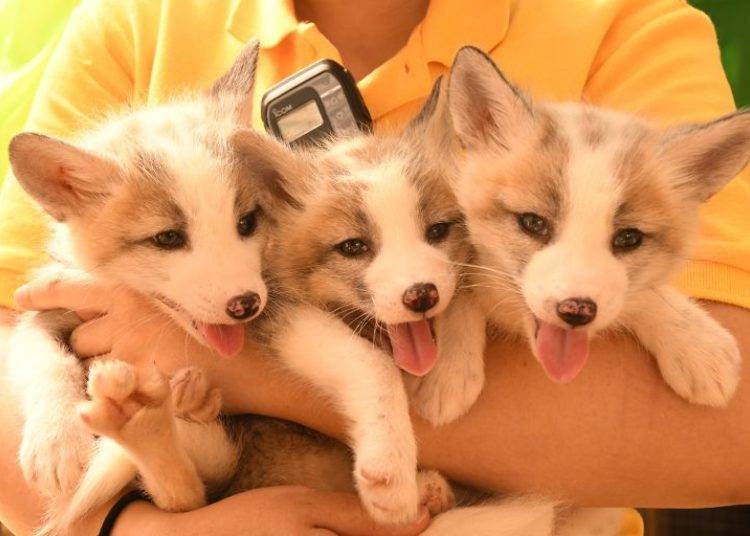 Japanese foxes usually give birth from March to May. Some fox babies can be seen in the reception area after this season.

From May to July, you can pet or hold little grown-up fox babies for an extra fee (600 yen). This event is top-rated among the visitors.

There is a feeding area in the middle of the park, and a lot of foxes gather there. The fox food is sold in the reception for 200 yen. Visitors can enjoy interacting with the foxes. 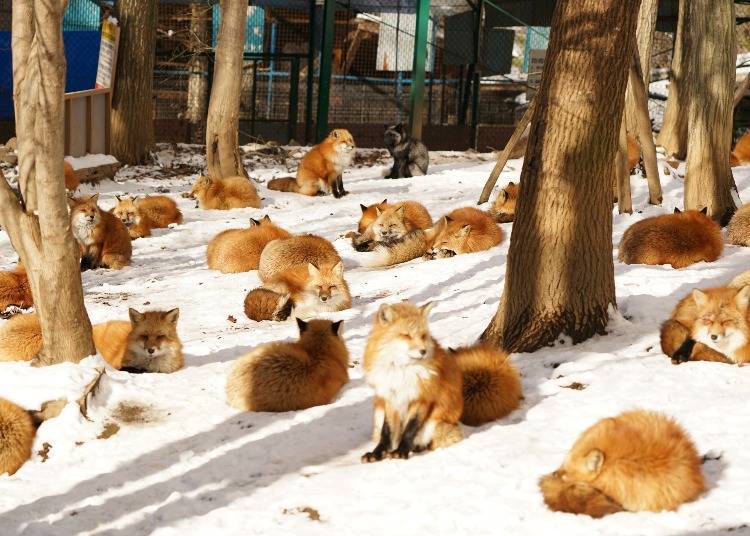 The coat of the Japanese foxes looks a little thin and loose in summer. However, when the temperature is getting colder, especially from late autumn to winter, it will turn fluffy.

The foxes start wearing their warm fur during this time, and likely to be even more adorable. Many people visit the park for this period. Although Zao is a snowy place, it’s open as usual in winter.

There are 6 types of foxes in the Zao Fox Village 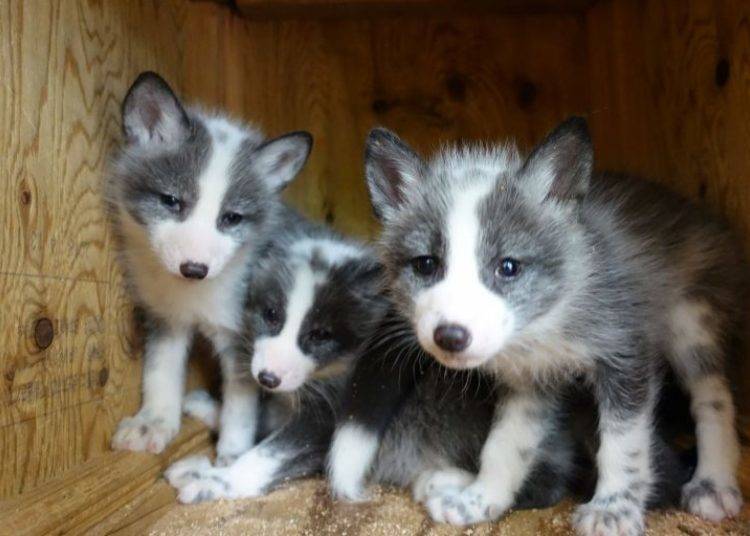 Six types of foxes roam in the village, including red foxes, silver foxes, blue arctic foxes, white arctic foxes, platinum foxes, and cross foxes. It is fun to walk around the park, looking for the foxes of various fur colors.

The foxes tend to react to black tights, fluttering skirts, and the straps of coats or bags.

Wild foxes have a habit of hunting small animals such as mice, and their instinct works reflexively to small moving objects. When visiting the park, please pay attention to your clothes and belongings.

Foxes are nocturnal... Are they sleeping during the day then? 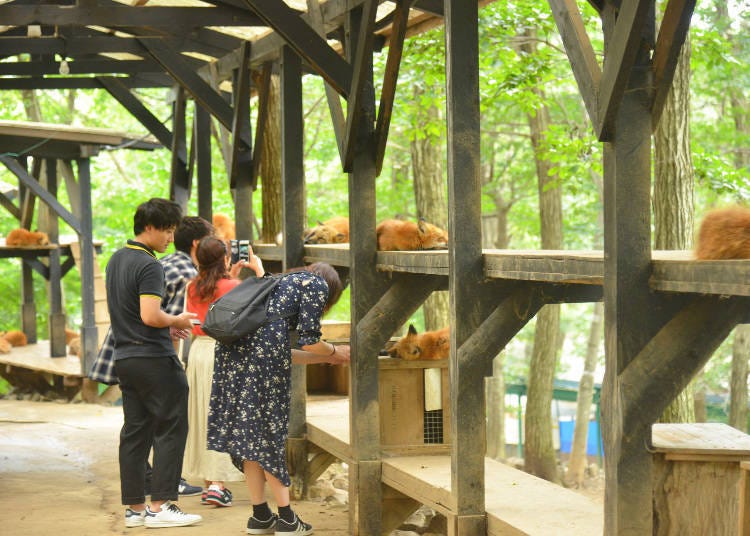 Also, the slopes with the red torii gates are also recommended places for taking pictures.

The combination of the red torii gates and the foxes will be perfect for a Japanese-style scene picture.

After mid-October, the autumn season is coming to the park and surrounding areas too. There are many broadleaf trees in the park, and they usually turn red and yellow. It is the magnificent part of this park that visitors can interact with foxes while enjoying the autumn leaves. 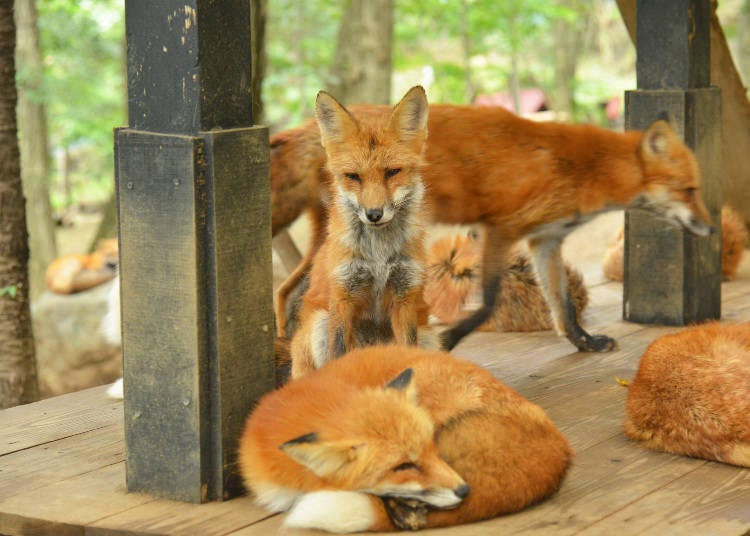 Echinococcus is a parasite of wild foxes that can be found in the foxes from Hokkaido.

The foxes in the village have gone through all possible measures to prevent infection with echinococcus since it opened, and all the foxes are artificially bred in the park. For that reason, no fox has ever been infected by echinococcus in the park.

Other than that, infection control measures such as periodic insect control are always made so that visitors can interact with the foxes safely.

You can also interact with goats and rabbits! 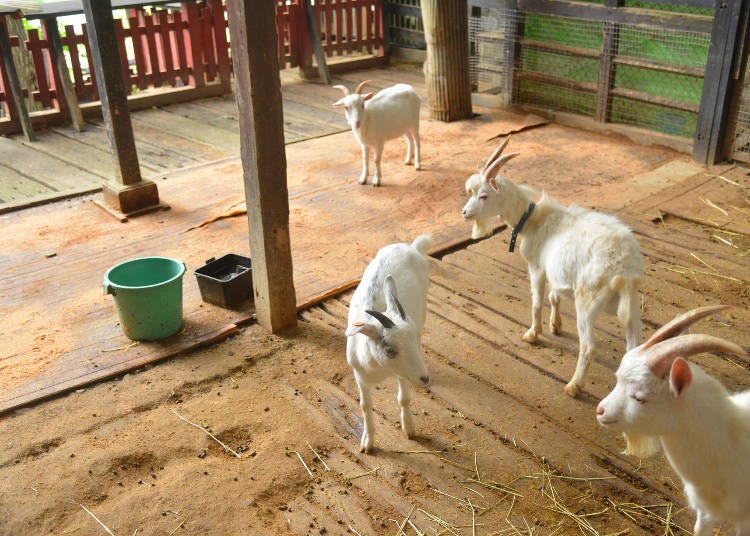 If you have had enough interacting with foxes, there is a place where goats, ponies and rabbits dwell. Their food is sold for 200 yen at the contact section dividing each animal and you can experience feeding animals. It depends on the time, but it is also possible to pet and hold the rabbits. 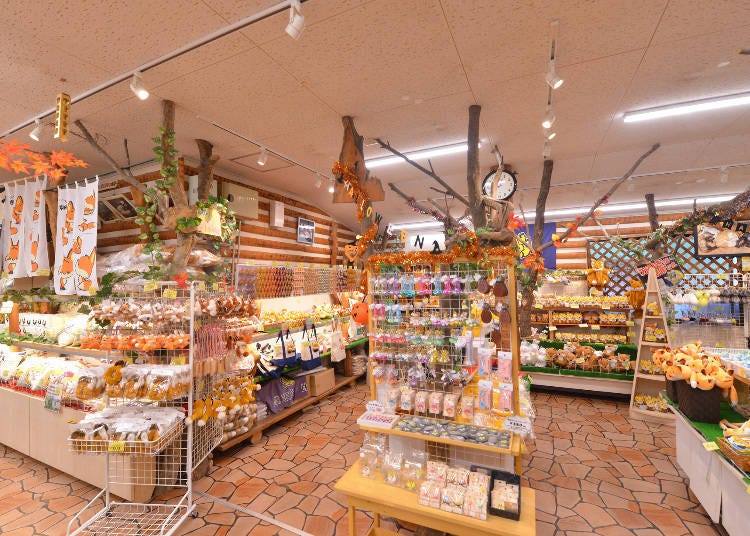 After interacting enough with foxes and the other animals, enjoy shopping for fox goods at a store near the reception. They have fox-themed food and items such as sweets, stationeries, and stuffed animals.

The famous souvenir sweets are the rice crackers and chocolate crunch. For the goods, various designs or material fox keychains, woodworks, fox-shaped magnet, and towels are popular.

Zao Fox Village is most popular during the autumn and winter season. The foxes grow in their winter “fluffy” fur and become round, turning into the cutest time in the year to visit. Interacting with the adorable foxes closely, take pictures of them, and feed them... Why not visit Zao Fox Village where you can spend a valuable and precious time?

Attractions of Miyagi & Sendai: Sendai Castle Ruins, Beef Tongue Shops, and More!
*This information is from the time of this article's publication.
*Prices and options mentioned are subject to change.
*Unless stated otherwise, all prices include tax.