HOME Tohoku Fukushima Aizu-wakamatsu Fukushima's Akabeko Dolls Will Steal Your Heart - Why is This Red Bull so Important in Japan?!

Fukushima's Akabeko Dolls Will Steal Your Heart - Why is This Red Bull so Important in Japan?!

With its adorable red round body, Akabeko dolls are a red bull-shaped papier mâché figure. “Beko” is the word for “bull” or “cow” in a Tohoku dialect, and the Akabeko is closely associated with traditional folk crafts from the Aizu region of Fukushima prefecture.

In Yanaizu-cho, where the Akabeko was born, you can see the adorable figure of the Akabeko all throughout the town. It’s no wonder that Yanaizu-cho pops up regularly under “#癒しキャラ” on Instagram, a tag for posting cute characters. 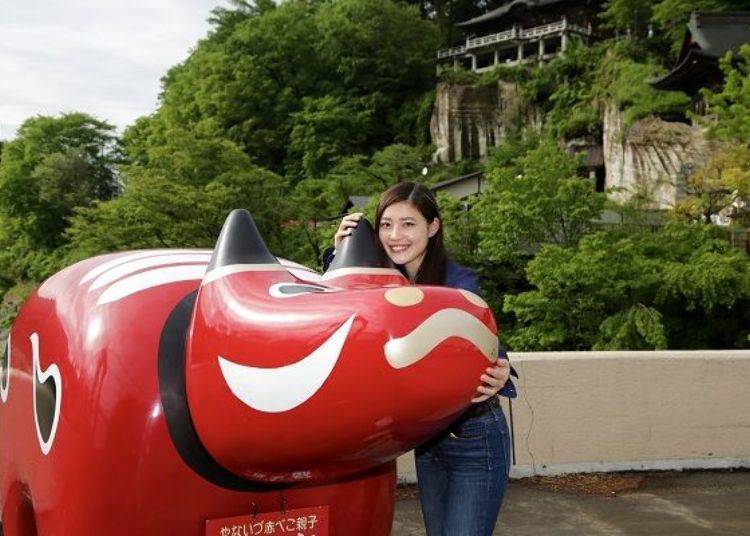 To get to Yanaizu-cho, take the Tohoku shinkansen for 1 hour and 20 minutes to JR Kōriyama Station, where you change to a west-bound train for 40 minutes. Yanaizu-cho is right in the heart in the large Aizu region in the west of Fukushima prefecture. 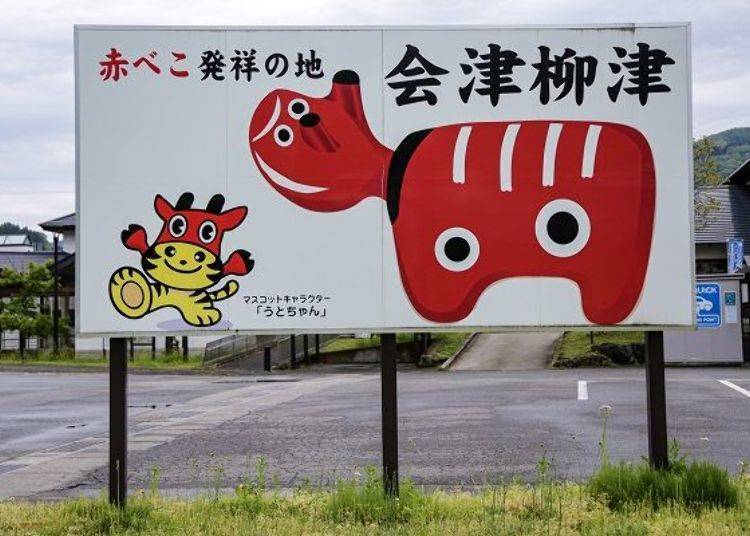 A large signboard in the carpark at the rest stop “Aizu Yanaizu”, for the tourist and sightseeing center, Seiryuen. The Akabeko is waiting to greet you all throughout the town.

On the day we visited, it was cloudy with a chance of rain. The Tadami River, which flows through the town, had swelled up to higher levels than usual, and the mountains in the distance were obscured by curtains of rain. 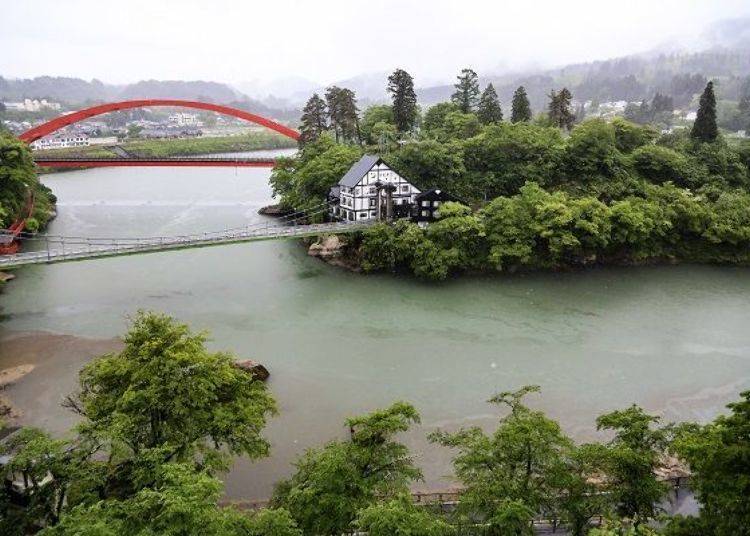 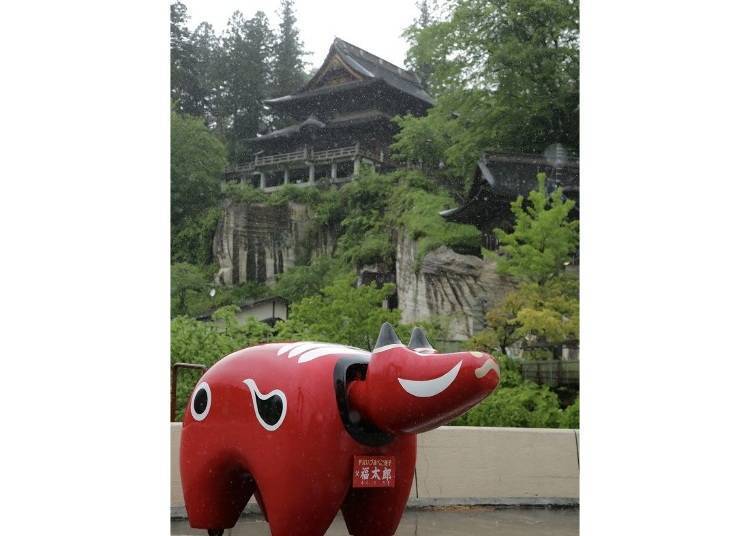 The legend goes back over 1200 years ago. Enzoji Temple was built by the high monk Tokuitsu, from the Nara period to the Heian period.

However, the 1611 Keicho Sanriku earthquake caused the temple to collapse. Since then, the temple has been rebuilt six times, and the current structure standing is the seventh one built. 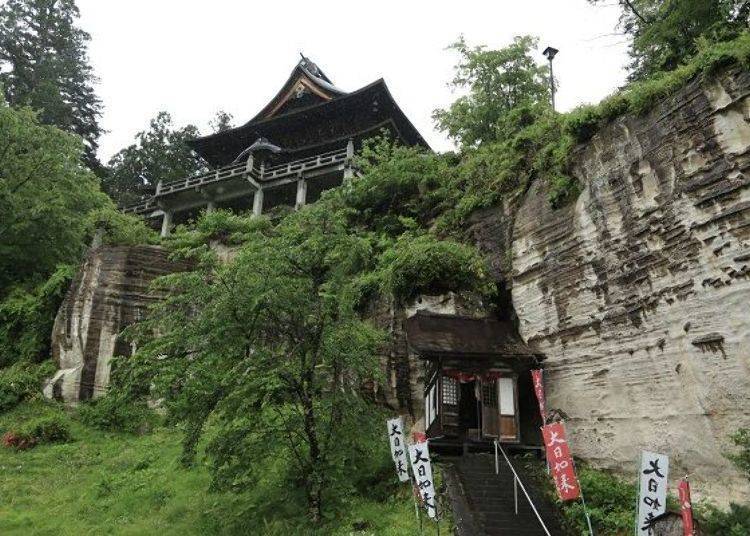 The view of Enzoji Temple from the old road. Right in front is the hall where Vairocana, one of the Buddhas of Sino-Japanese Buddhism, can be worshipped.

However, the temple is built on a cliff. In order to transport wooden building materials sent down the Tadami River up the cliff, a lot of human labor is needed.

And it is here, that the red-haired bulls appeared. These red bulls helped to transport the building materials to complete the stunning temple hall, and this is how the legend of the Akabeko began.

Besides this, a statue of a sitting bull, a “Nadeushi”, was also erected at the site where the red bulls offered their help, and is a sacred ground that continues to be protected by the people of Aizu to this day. 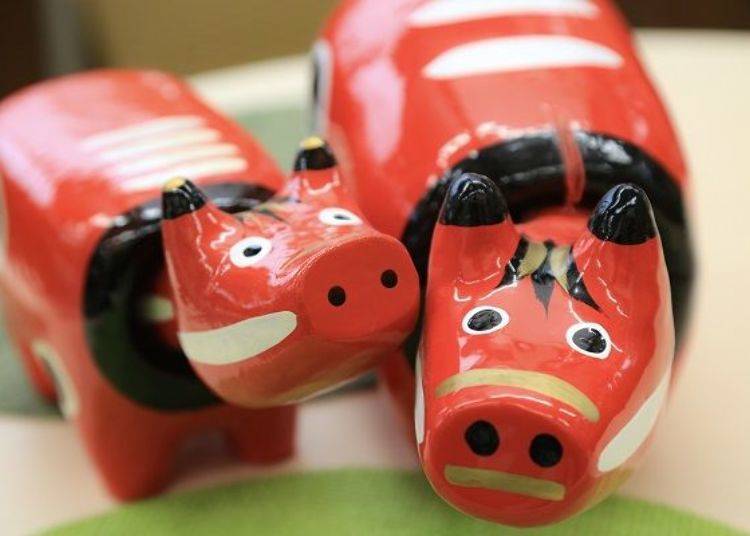 The Akabeko folk craft come with different expressions. To the people of Aizu, these crafts are symbols and amulets of fortune.

The chairman of the Volunteer Sightseeing Association, Takeda Mikio, says, “In the birthplace of the Akabeko, Yanaizu-cho, you can see the Akabeko all throughout the town.” Mr. Takeda took us on a tour of the town to find the Akabeko! 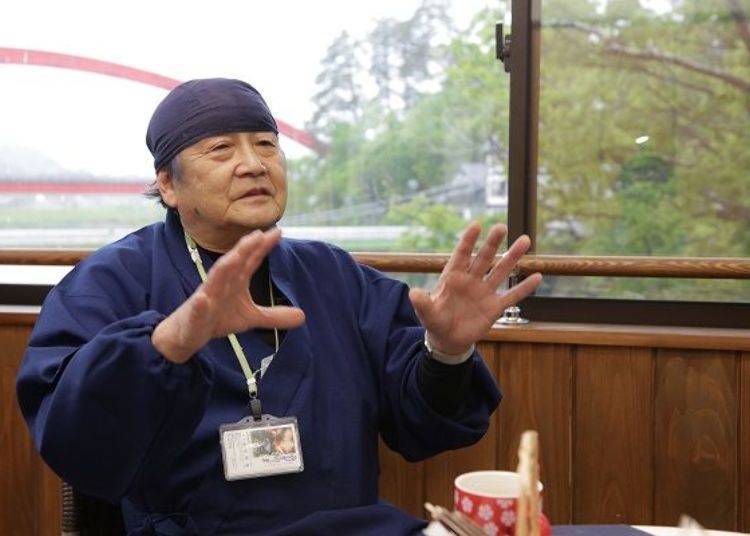 Mr Takeda, with his vast knowledge of the history of Yanaizu-cho, can answer any question about the town and its past

Throughout the town, there is a special monument featuring a family of Akabeko: the father, Fukutarō, the mother, Mitsuko, and the two children, Mou-kun and Ai-chan.

We took a photo with the Akabeko doll with its home as the backdrop and moved on to Kiyohime Park, where you can get lovely views of Enzōji Temple. 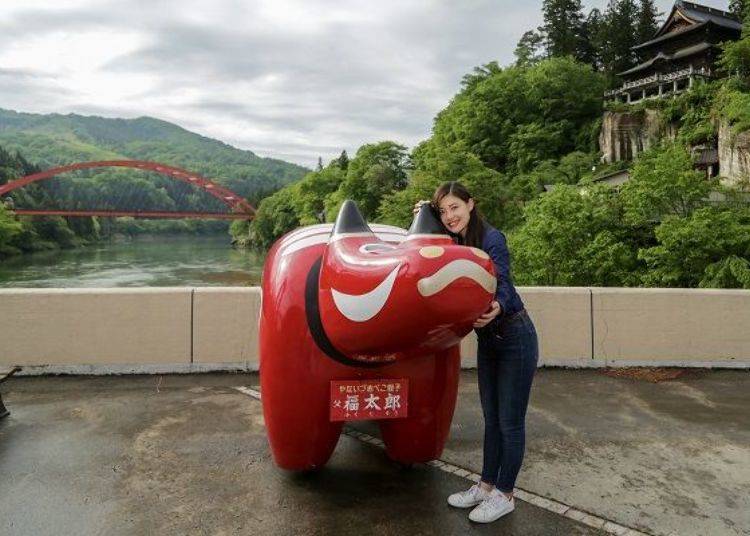 The carpark of Kiyohime Park faces a view of Enzōji temple and Yanaizu-bashi Bridge. This is the father Fukutarō, and the way he cocks his head is so cute! 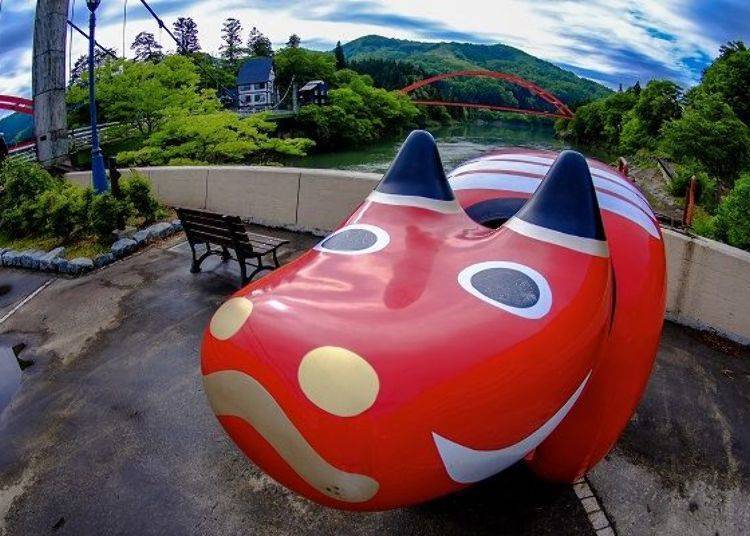 On the grounds of Enzoji Temple, you can find the mother Akabeko, Mitsuko (Featured in the photo is Fukutarō)

Besides the actual Akabeko statues, there are many other objects featuring the image of the Akabeko scattered everywhere. 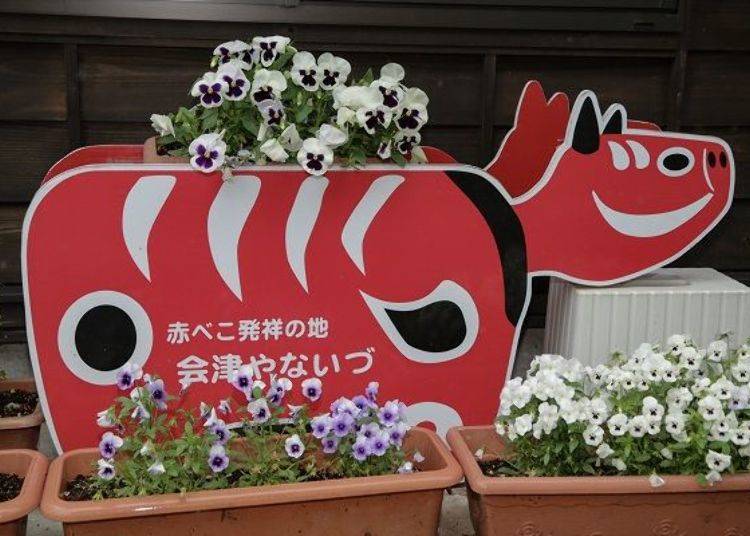 A flower stand in the shaped of an Akabeko, which was found somewhere in town 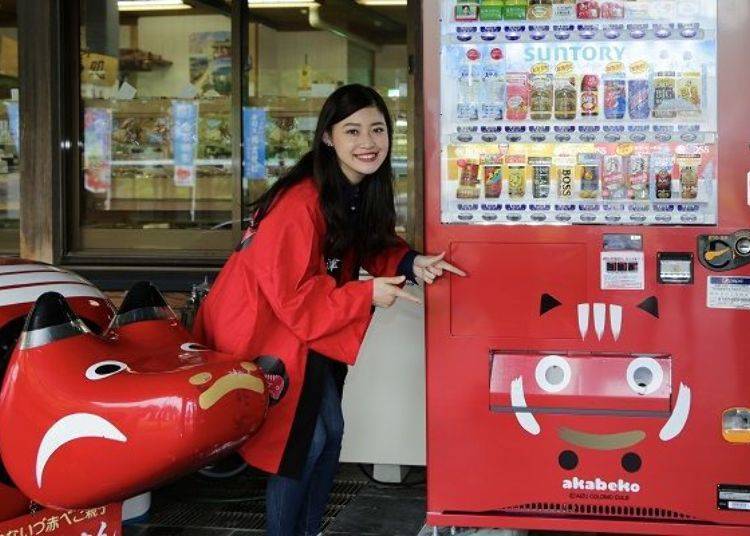 An Akabeko version of a vending machine at the entrance of Seiryuen! On the left is one of the child Akabeko, “Ai-chan”

Mr. Takeda says, “You can find items and objects with motifs of the Akabeko everywhere, and it makes for an enjoyable way to take a walk through the town. Besides the Akabeko, the town has many spots with red as its main color scheme, such as the bridge.” 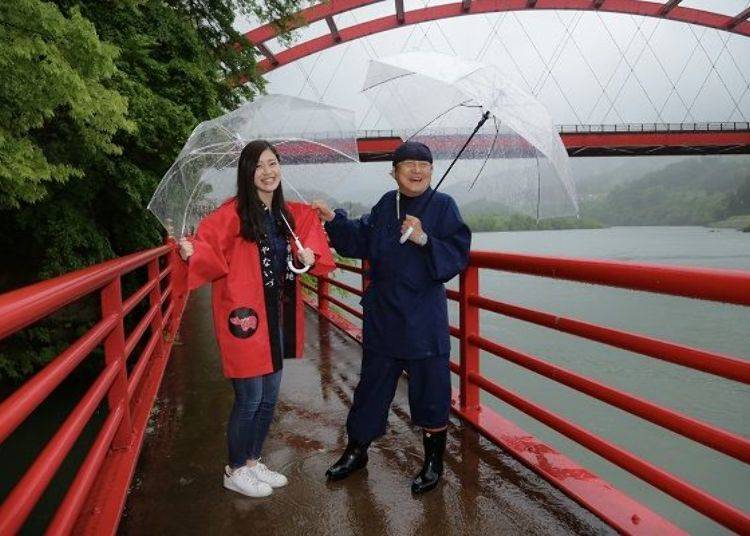 An Akabeko designed happi, a traditional Japanese coat, which was borrowed from Mr Takeda

We parted with Mr. Takeda at Kiyohime Park, after he introduced us to the spots where you can find the four members of the Akabeko family. The still atmosphere of the temple town and nostalgic streets, along with the adorable Akabeko dolls everywhere, make for a calming and refreshing time.

Anyway, though we had a special tour this time, the Volunteer Sightseeing Association normally offers three walking tours: the Yanaizu Walking Tour, the Historical Walking Tour, and the Gourmet Walking Tour, each of which takes 55 minutes. In this small and quaint town, you can take a stroll or walking tour with ease.

When we asked Mr Takeda for recommendations for places which offer craft or cultural experiences, we headed to “Ikoi-no-Kan Hotto in Yanaizu” on his recommendation.

Here, there are sales of local goods and specialties, as well as a food court. There are also free foot spas available, with both open air and sheltered concepts, making it this place a hot favorite amongst tourists. 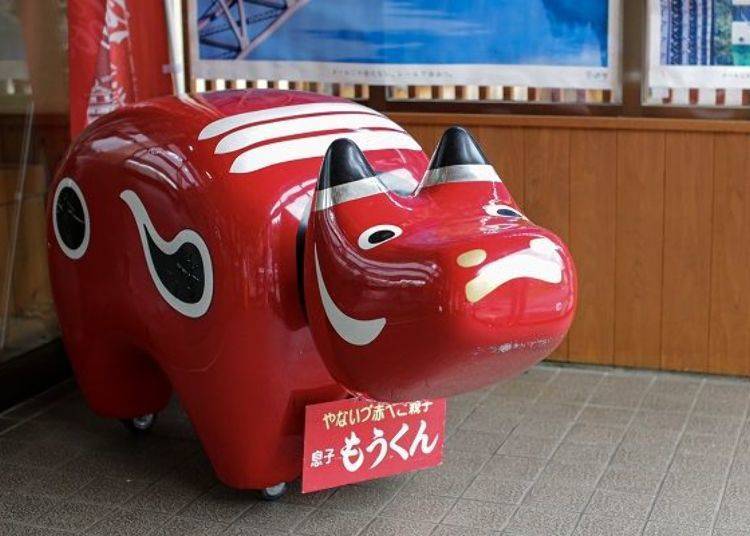 At the entrance, one of the child Akabeko, Mou-kun, welcomes you

Besides the Akabeko doll painting experience, there are other workshops as well, such as making Yanaizu Awa-manju buns, made of rice flour and millet, and a pizza-making workshop. As a keepsake of the fond memories from this trip, we challenged ourselves to create our own Akabeko figure. 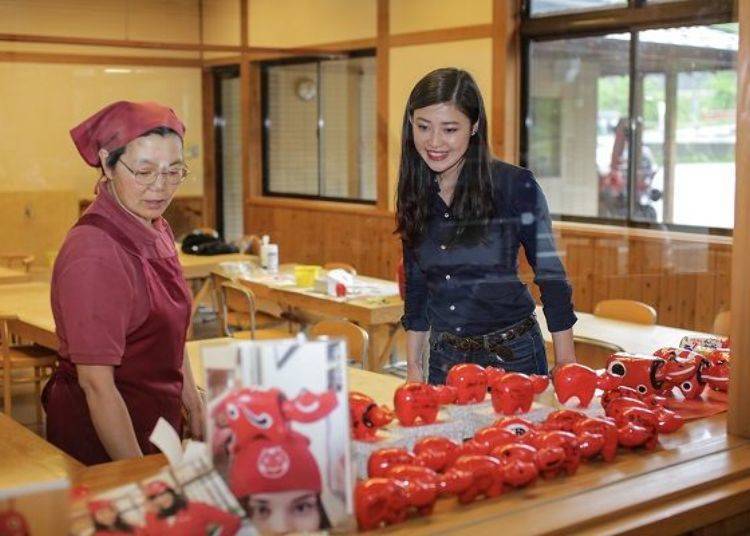 The Akabeko are full of personality. “Depending on the person drawing, the expression on their face changes”

There is a workshop space in the building dedicated to painting the figures, which costs 800 yen (with tax) per figure. You’ll be provided with a plain, red Akabeko figure, as well as white, black, and yellow acrylic paints.

With a sizeable Akabeko doll as an example of the finished project by our side, we are also accompanied by the staff Shirai Fumiko, who tells us to draw as we like. “Oh? You’ve already started drawing?” she chuckles. With some slight unease with regards to our artistic abilities, let us start painting! 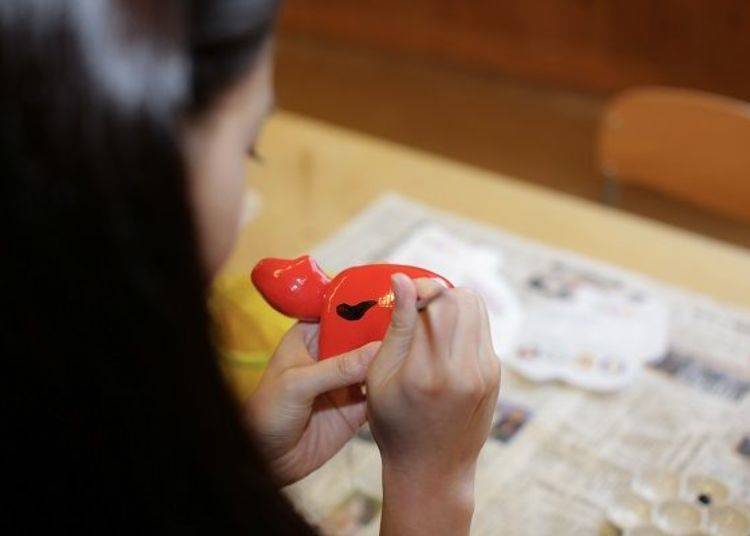 First, start off very very carefully with a thin brush… 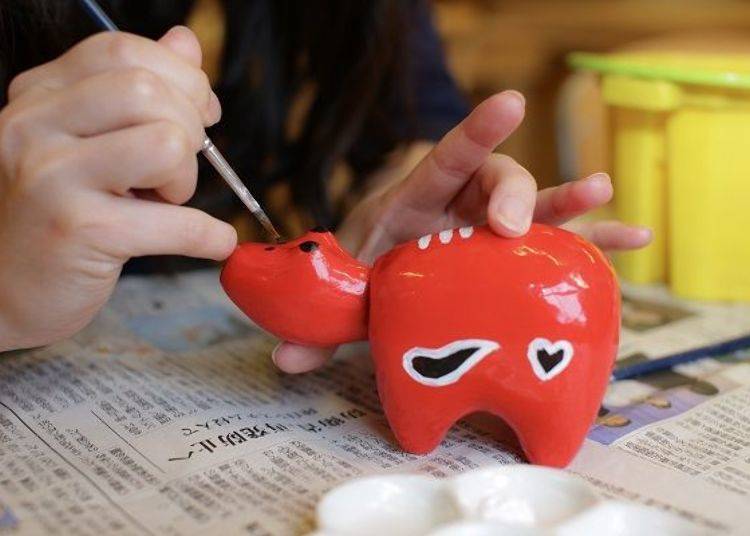 Hold on to its bobbing head for a stable work surface 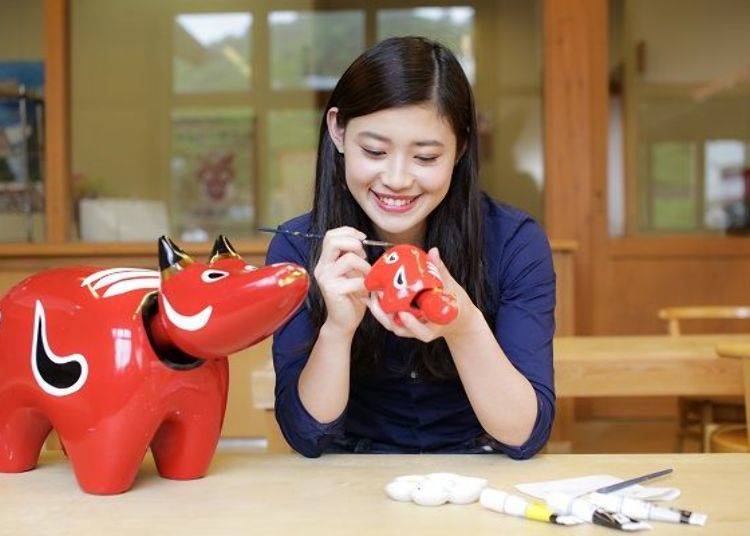 It’s a tough battle to get a perfect balance between the size of the eyes and mouth. “Doesn’t this look like a turtle’s face? Lol!” 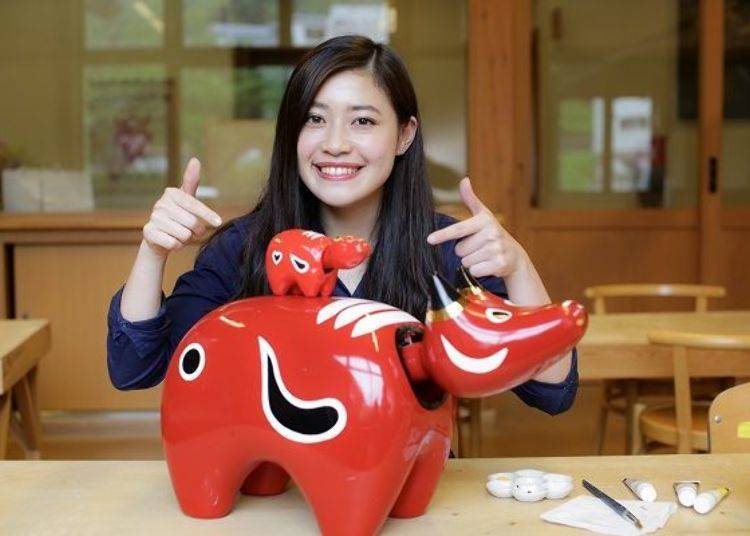 “The Akabeko with a heart accent is completed!"

The Akabeko doll was complete in around 30 minutes. Even if you took your time, it would take at most an hour to complete. As the Akabeko has a simple shape and design, drawing the figure is a fun activity that both adults and children can enjoy.

The Akabeko will be given its own carrying case for you to bring home in, and while waiting for the paint to dry, you can browse the area. At the souvenir corner, sweets, trinkets, and other souvenirs are all decorated with the happy face of the Akabeko. 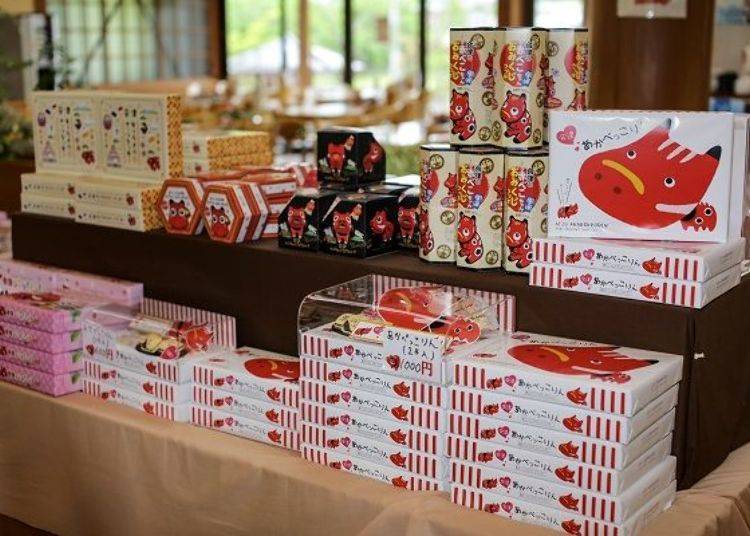 The Akabeko will be given its own carrying case for you to bring home in, and while waiting for the paint to dry, you can browse the area. At the souvenir corner, sweets, trinkets, and other souvenirs are all emblazoned with the happy face of the Akabeko. 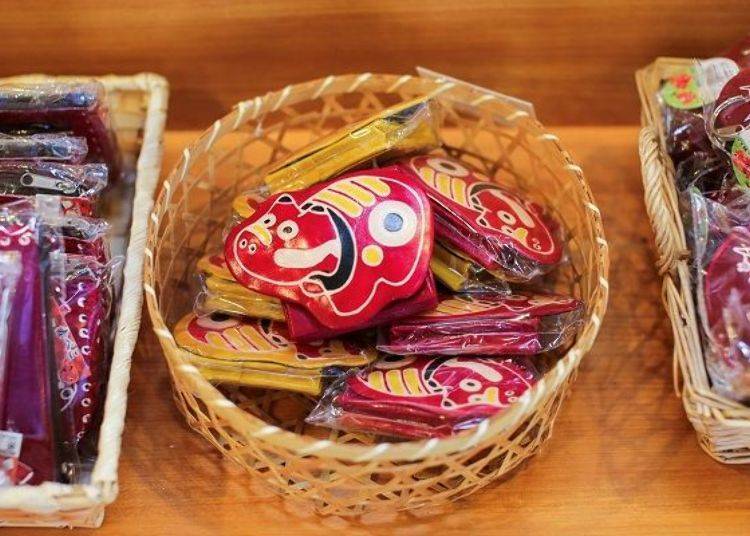 An Akabeko-shaped leather coin pouch at 540 yen (with tax)

Besides souvenirs, the food court also serves food with the motif of the adorable Akabeko.

This is the Akabeko curry, a mildly spicy curry accompanied by an island of ketchup and bacon rice in the shape of an Akabeko. Its charming eyes are made from a thinly sliced piece of pickled leek and seaweed. With such an adorable look, you can’t help but smile when you see it. 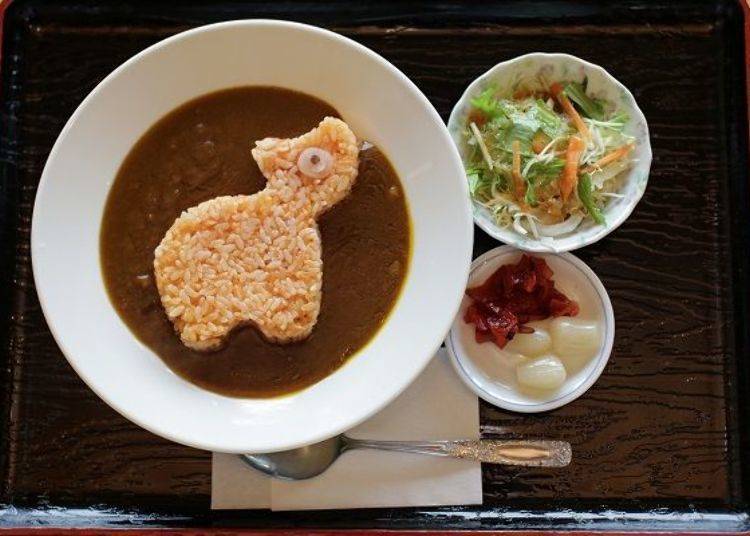 The Akabeko curry (850 yen, with tax), popular with both adults and children.

One part of the enjoyment of this trip is in the unique workshops and experiences, and delicious local delicacies. In Ikoi-no-Kan Hotto in Yanaizu, you can enjoy both!

Bakery Akabeko: An irresistible bakery in the area

Next, we took a stroll throughout the town. About 100 meters away from the Jiōmon-gate of Enzōji Temple, you’ll find a bakery with a bright red signboard.

Once you enter “Bakery Akabeko,” you’ll find bread and other baked goods seared with the symbol of an Akabeko, all lining the shelves. 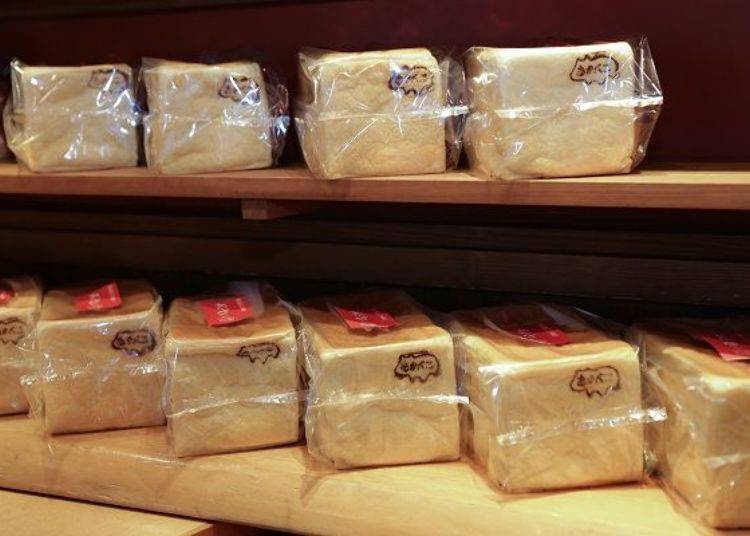 Several loaves of soft bread, made using butter produced in Japan and with no added preservatives. The bread is soft even at the corners, and is branded with an Akabeko. One loaf sells for 320 yen, while you can get two for 600 yen (tax not inclusive). 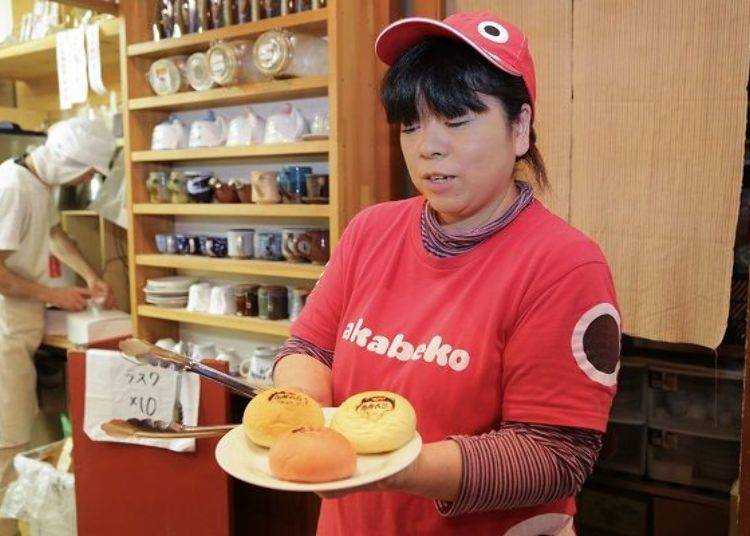 From the cap to the t-shirt, even the staff’s uniform is in the image of an Akabeko! 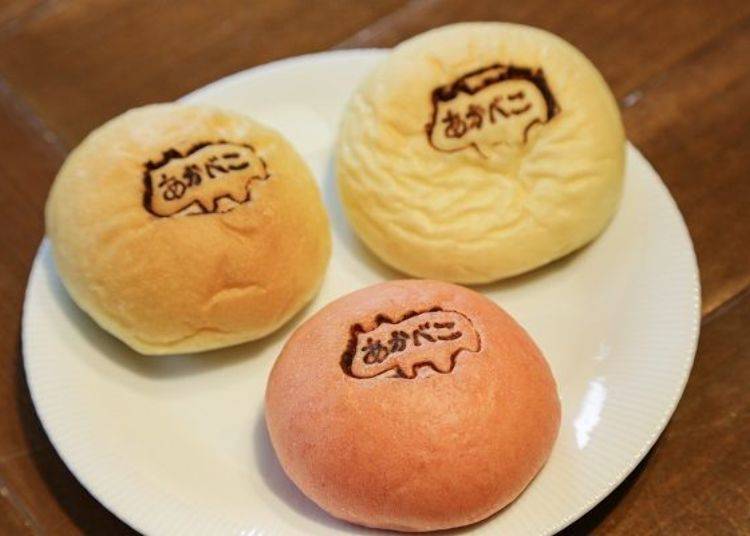 Akabeko buns, which come in three colors (180 yen each, without tax)

The light red-colored buns get their color from red malt flour. In the center is homemade milk cream and cheese. The white buns, on the other hand, have either cream (picture left) or chocolate cream (photo right) centers. The soft buns and gentle sweetness of the cream makes for an unrivaled combination! 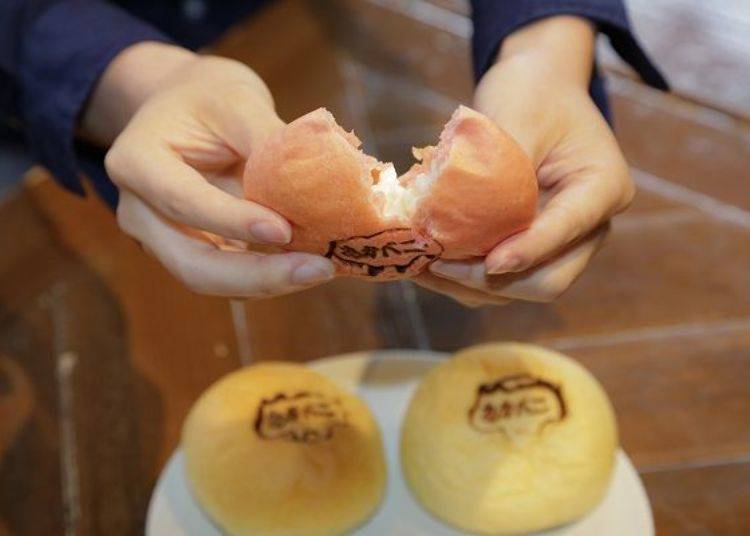 The bun with a milk cream center is made with the image of an Akabeko in mind.

Besides bread, the shop sells sweets and desserts too. 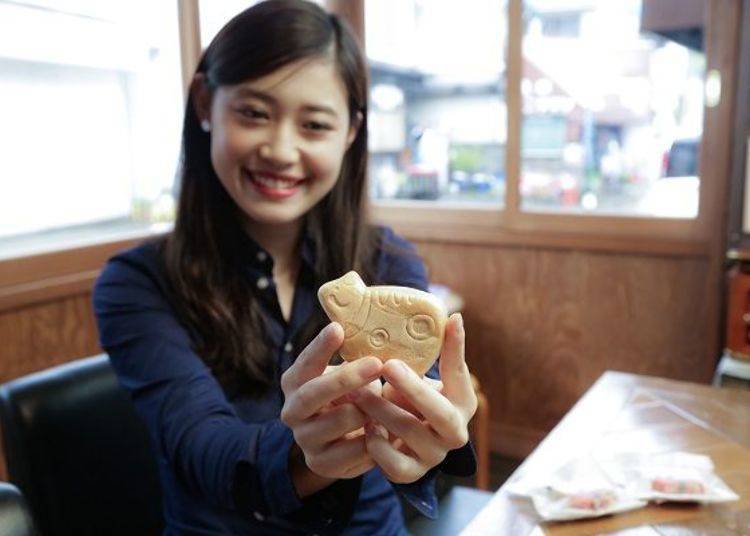 The “Akabeko monaka”, a jam filled wafer cake, is in the shape of an Akabeko, and makes for a great souvenir (160 yen each, without tax) 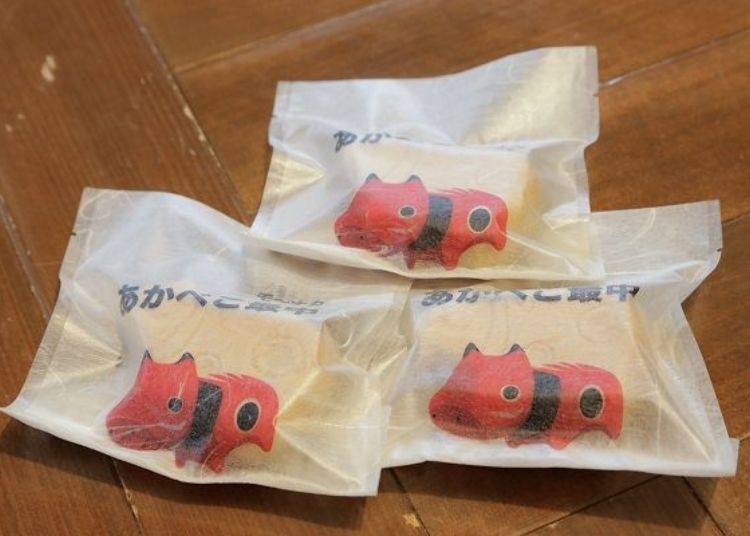 Within the thin layers of the wafer is a center filled with homemade red bean jam! 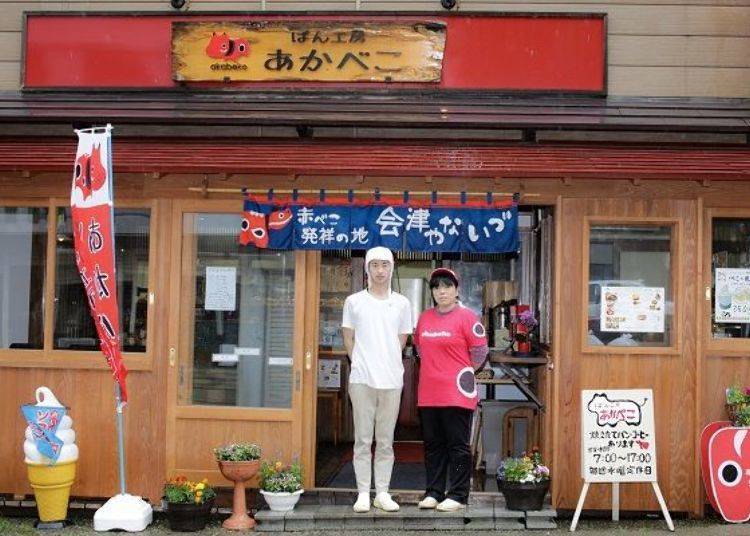 There is an open terrace café space as well, where you can order a cup of coffee to enjoy. It’s a good place to take a break and have some bread after you’ve tired yourself out from your walk.

Aizu Yanaizu Akabeko Matsuri: A local festival where you can see the legend of the Akabeko come to life

Every year in one of the Saturdays in the first half of October, Yanagi-cho holds the “Aizu Yanaizu Akabeko Matsuri.”

In the festival, groups of five people hold a tug of war contest with a round log, in the “Akabeko Maruta Hiki Senshūken.” For those interested in the festival, it will be a great experience to visit Yanaizu-cho on the day of the festival. 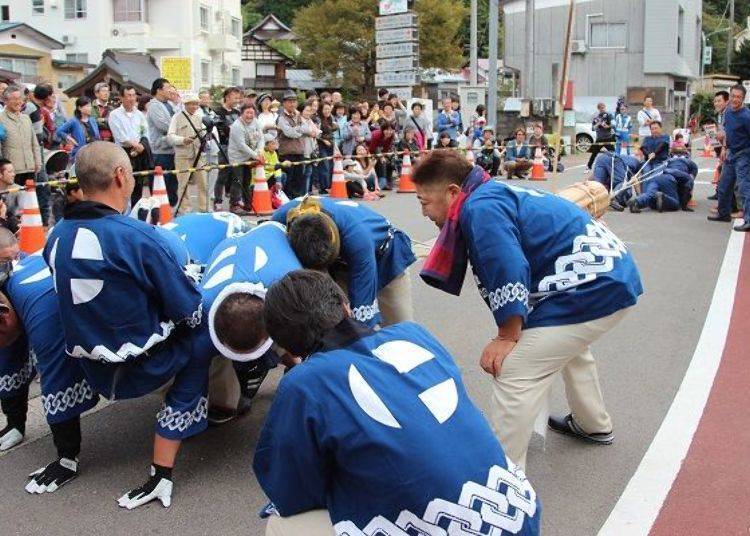 
From seeing and eating to hands-on experiences, this town, the birthplace of the Akabeko’s legend, is where you can feel such charm. With a hot spring nearby, you can enjoy a soak after you’ve finished strolling through the town. The Akabeko of Yanaizu-cho are waiting for you!