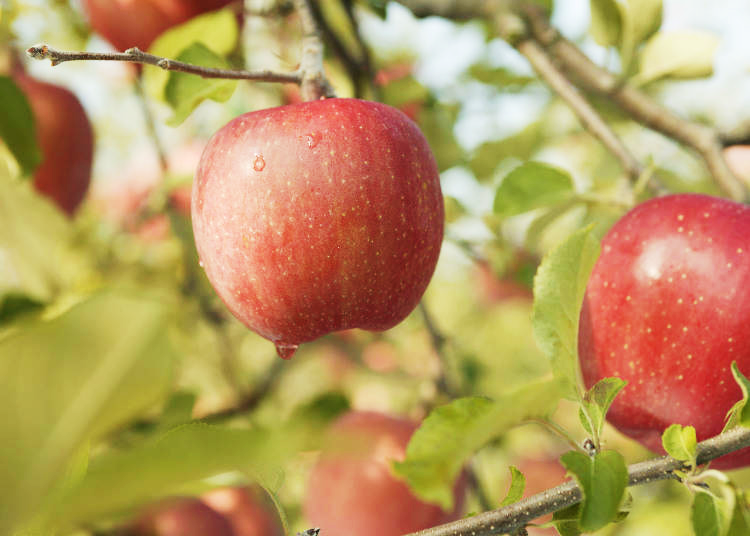 Aomori Prefecture, in northern Japan, is famous within the country for being home to top-class Aomori apples. With the cool climate ideally suited for cultivating them, apple varieties such as the Fuji Apple and Tsugaru Apple were bred and perfected there. With some Aomori apple varieties coming on sale as early as August, Aomori's peak apple season is from October to November.

During this period, you can even visit apple farms directly, for a pick of only the freshest apples. This time, we'll be introducing some notable apple delicacies and gourmet foods from Hirosaki City and Aomori City, both of which are famous as centers of apple cultivation.

Aomori: The famed producer of apples 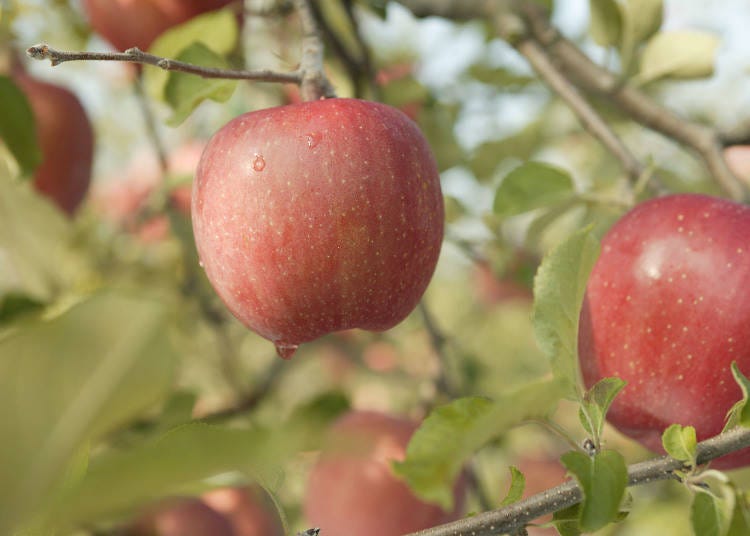 Every year, over 700,000 tons of apples are produced in Japan. Aomori Prefecture, situated in the northernmost point of the Tohoku region, accounts for over 50% of those apples, according to a 2017 survey by the Aomori Prefectural Government’s Apple Agricultural Division, and is a major apple cultivating region.

Even within Aomori prefecture, there are places famous for their extremely high apple produce, such as Hirosaki City, located in the Tsugaru area in the northwestern part of Aomori.

In the surrounding region, restaurants and eateries regularly offer dishes featuring apples, from desserts such as apple pie and tarte Tatin, to even galettes, soups, and other gourmet dishes. 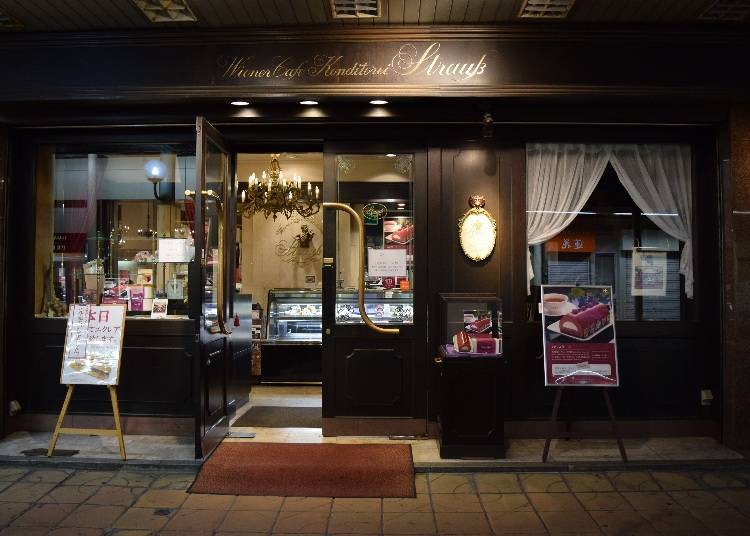 Located 6 minutes away from Aomori Station on foot, Vienna Café Konditorei Strauss is situated at the corner of a side street lined with night shops. The restaurant serves authentic traditional desserts and snacks from Vienna.

The previous owner of the shop spent seven years in Austria learning the art of pastry making and was even awarded the qualifications as a meister of dessert making by the Austrian government. The recipes created by them are still used in the shop today. 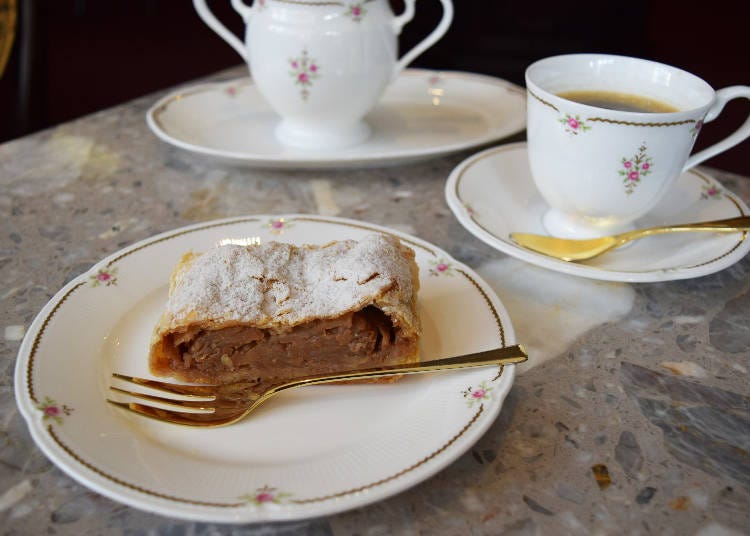 “Apfelstrudel”, one of Vienna’s most famous pastries, are sold at Strauss and are made using apples from Aomori, raisins, and walnuts. The ingredients are wrapped well in the thinly stretched dough, then baked.

The pastry and Aomori apples give this dessert a moist texture, and despite the strong taste of the apples, their sweet and sour flavor complements well with the spicy cinnamon for a fragrant accent. Fresh cream can be added as a topping as well. 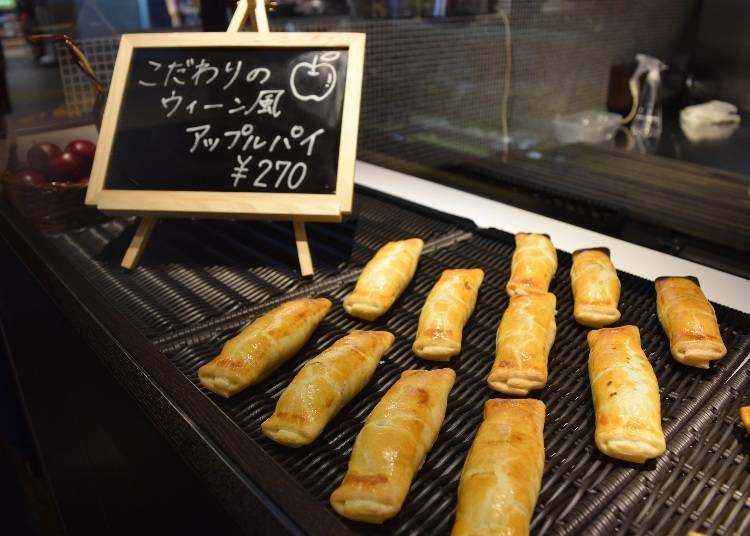 Strauss has a branch in Aomori Junmi Kan, a food court inside Shin-Aomori Station, and you can buy takeout versions of their apfelstrudel. If you are wondering what to buy in Aomori, this is it!

The recipe was altered slightly to make the dish more suitable for takeout, by creating a thicker outer skin, resulting in a slightly crispy texture.

As with the main shop, all apples used are produced in Aomori. As there is a simple kitchen inside the booth, the apfelstrudel is baked on the spot, ready for you to take home! 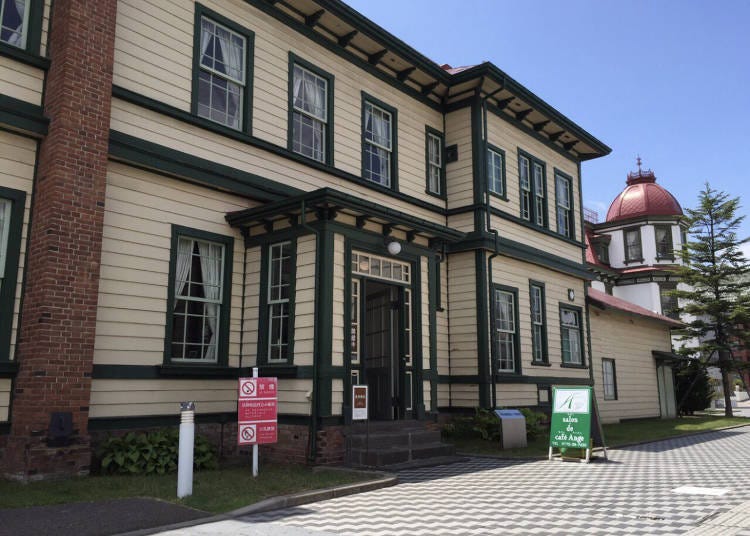 Hirosaki City’s streets are lined with many western-style buildings, and one of them is the Tō Gijuku Gaijin Kyoshikan, the former residence of foreign teachers to Hirosaki City in the 1900s. Today, the place is a museum, with a café on the first floor, Salon de café Ange. 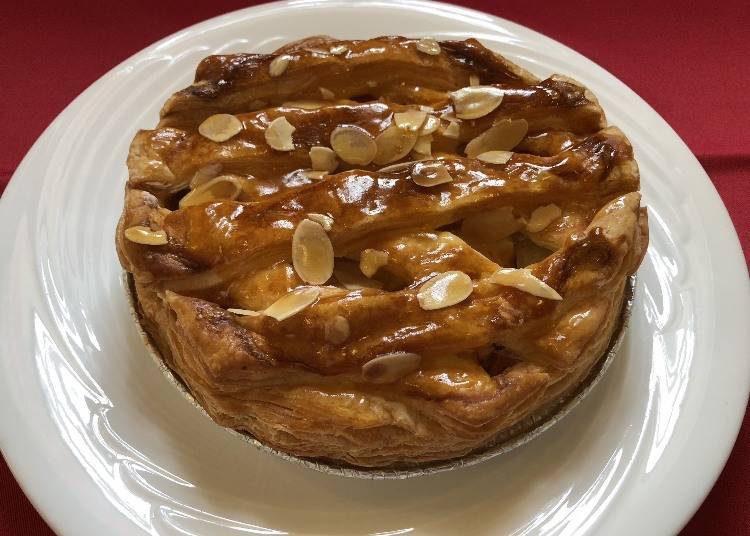 Their popular Aomori apple pie is a rich combination of sweet and sour, and uses the Eikoga variety of apples produced in Hirosaki City.

The pastry is lined with raisins and apples, and their mellow fragrance gently stimulates your appetite. As you bite into the crunchy apple pieces, you can taste its refreshing sourness. The aromatic almonds on the pie crust also add a nice crunch to the overall texture. 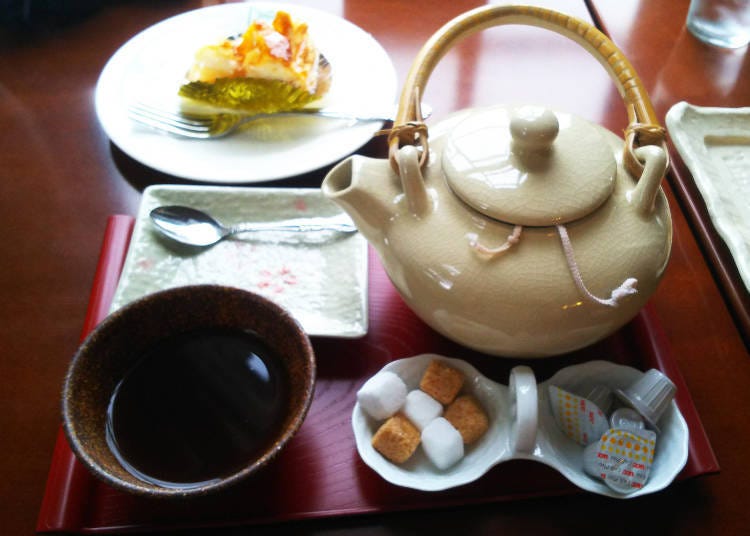 When visiting this café, be sure to try their “Tsurugaru Domain Reproduction Coffee”! The first people in Japan to drink coffee were the warrior-class living in Hirosaki.

From there, foreign visitors brought the art of coffee making to Japan, reproducing the taste and brewing methods of coffee from abroad within the borders of Japan.

The coffee grounds are wrapped in a tea cloth and placed in a clay pot of hot water, and after steeping for a while, the coffee is pressed using the fabric.

Depending on how the grounds are pressed, the taste of the coffee can change, but the coffee itself is neither too bitter nor thick, allowing you to taste the flavor of the beans clearly. 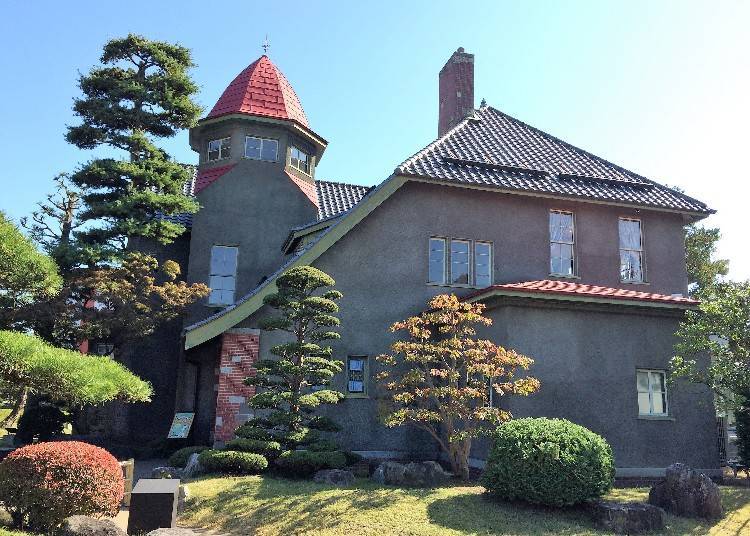 Fujita Memorial Garden is a beautiful Japanese style garden, with a lovely view of Mt. Iwakisan. As you go through this garden, you’ll come across Taisho Romantic Tea Room.

The café is on the first floor, while the rest of the building is a museum dedicated to the original owner of the house, the businessman Fujita Kenichi. 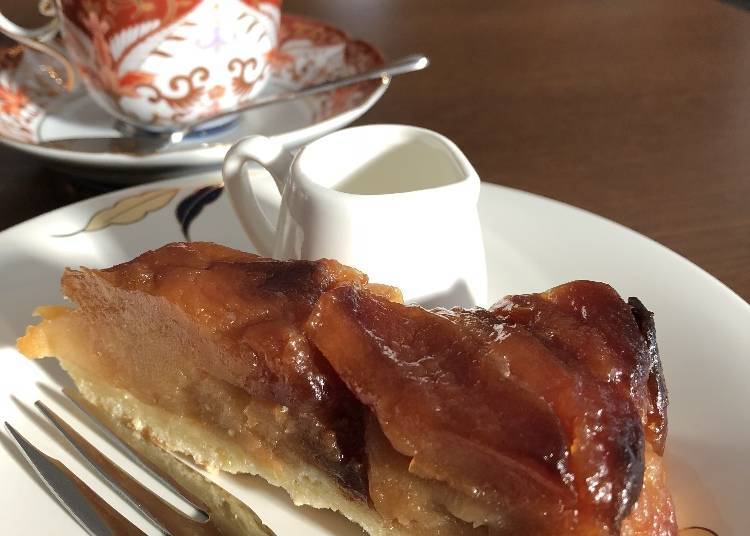 The glossy red Aomori apples are cooked with sugar and water, then baked, as evidenced by its rich umami flavor. As you take a bite, the natural sweet and sour taste of the apple, and the smell of caramel wafts gently throughout your mouth. 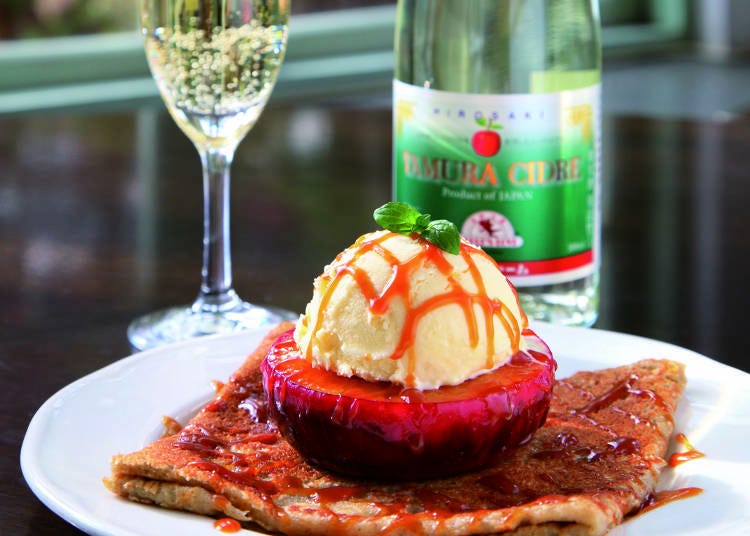 For an item that pairs well with sparkling cider made from Aomori’s apples, the “Apple and Vanilla Ice Cream Galette” is the way to go. The galette is just the perfect sweetness and is topped with a caramelized apple and vanilla ice cream. The chewy galette and crunchy apple make for a very enjoyable mouthfeel.

The Aomori apple cider, with its fresh and sweet taste of apple, is a perfect complement for the aromas of the galette and is a sophisticated and refined flavor that those with a mature taste are sure to enjoy. 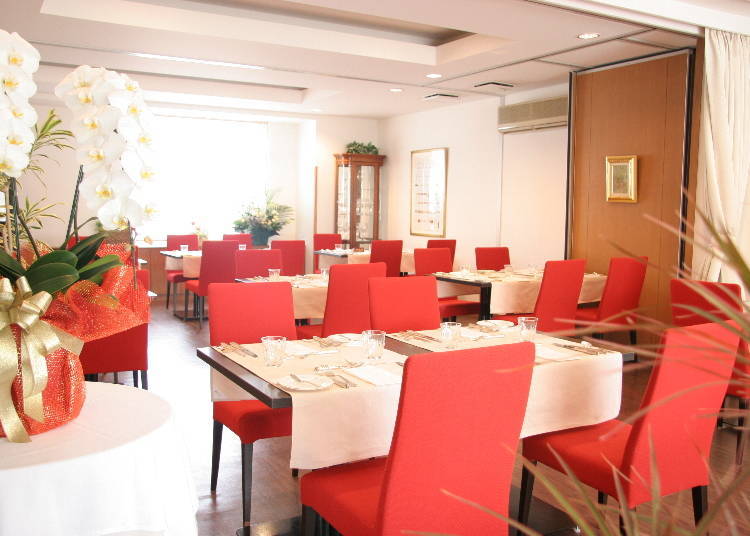 Along the same street and lined side by side are Café Yamazaki and Patisserie Yamazaki too, and they all make use of “miracle apples”, cultivated without any chemical fertilizers or pesticides, to make their delicious desserts and delicacies. 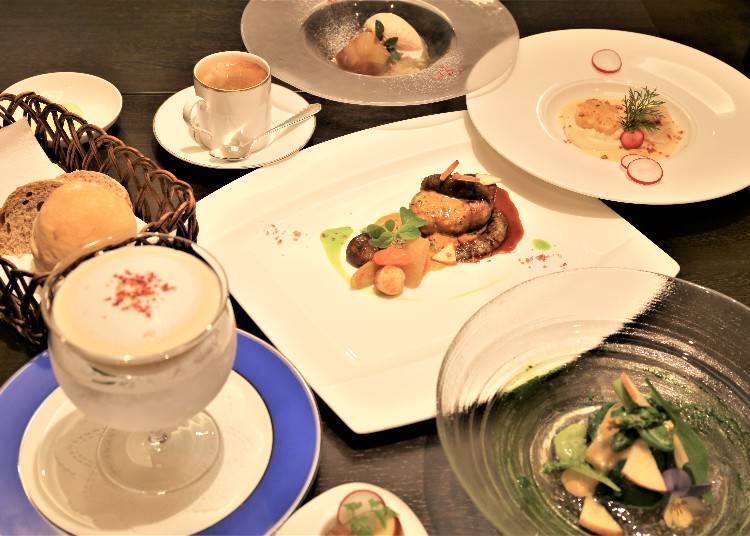 The restaurant offers a “Miracle Apple Full Course”, a collection of gourmet foods made using apples. From salads made using seasonal fish and apples, to scallop poele with apple sauce, a variety of gourmet dishes is served with this course.

Among these dishes, is the “Miracle Apple Cold Soup”, made using all parts of the apple including the skin, to create a smooth and creamy soup. With a faint hint of salt, you can savor the refreshing taste of apple. 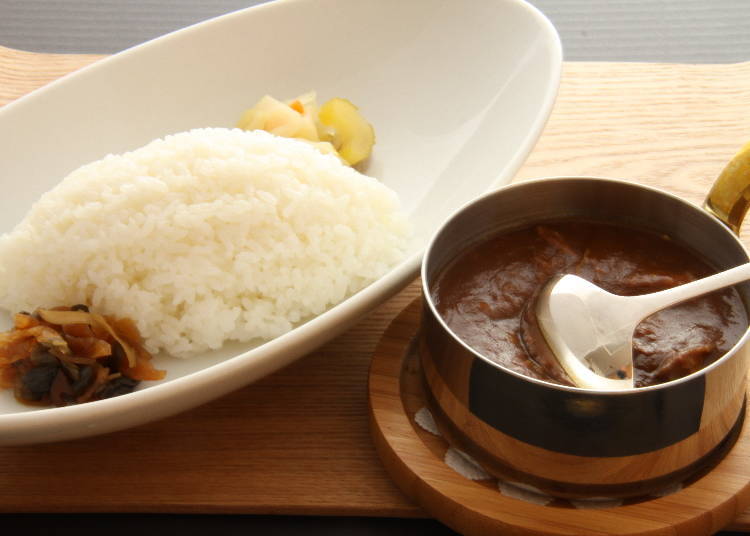 The restaurant also serves individual apple dishes, and one highly recommended item is the “Pork Curry with Grated Miracle Apple”.

The taste is thick and mellow, accented by the aroma of spices. As the curry is available for takeout as well, you can bring it back to enjoy in the comfort of your own home.

A-FACTORY is a goods and trading complex located a three-minute walk away from Aomori Station, along the coastline. With an exterior in the shape of a factory, this uniquely shaped building brews cider using apples produced in Aomori Prefecture. With its convenient location, it’s a treasure trove of Aomori souvenirs. 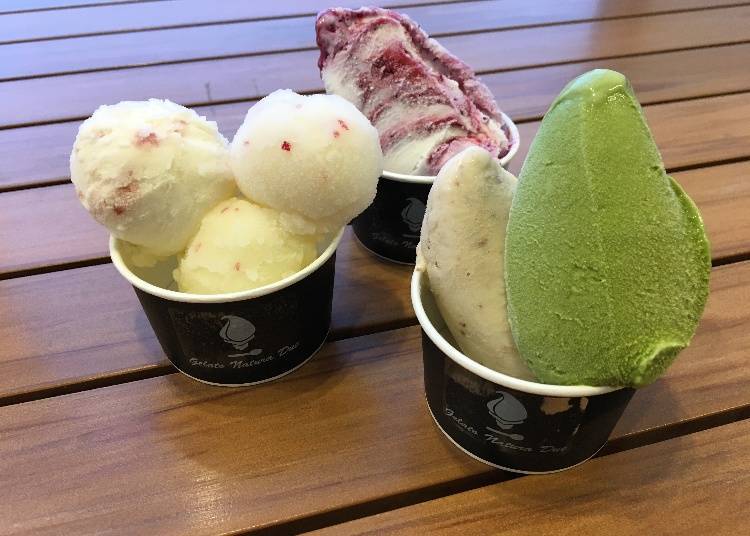 On the first floor is “Gelato Natura Due”, a gelato shop where you can taste six different flavors of apple gelato made from apples produced in the prefecture, including “Akadama” and “Fuji” apples.

There are three sizes available, single, double, and triple. For those who would like to try multiple flavors, get the triple scoop, which allows you to mix and match three flavors to taste and compare.

As the Aomori apples are added straight into the gelato, the freshness of the apple gelato allows you to taste the subtle differences in flavor between the different types.

If you’re absolutely lost about which flavor to choose, the counter has a chart showing the various sweetness and sourness levels of each apple, to aid you in making a more informed choice. 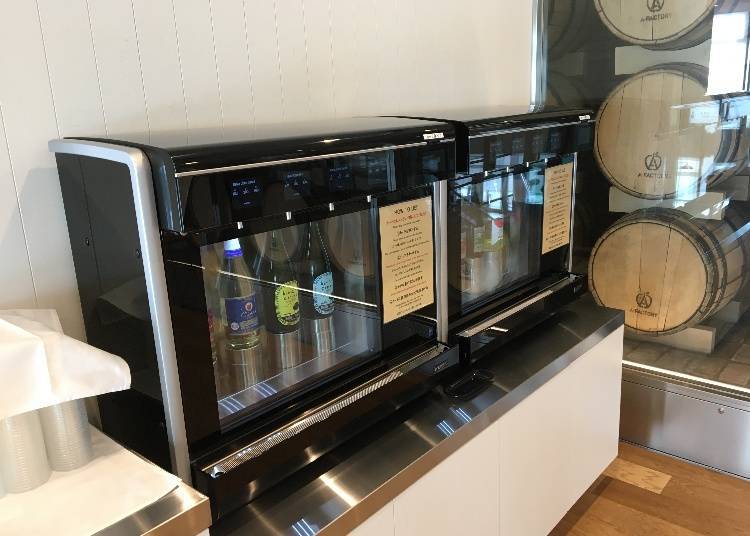 What else to buy in Aomori? The apple alcohols are divine! If you’re in Aomori for alcohol, you definitely have to try its sparkling apple cider. At the tasting machine on the second floor, you can taste different varieties of cider. There are eight different sweet and dry varieties available, including “Aomori Cider” and “Nikka Cider”.

On the same floor is a restaurant that makes use of the prepaid card system, and you can use the card to buy ciders from the cider machine at the push of a button. The ciders sold in the machines can be bought from the Aomori souvenir shop “FoodMarchè” on the first floor too.

Japan Food Guide: Famous Dishes of Tohoku, Japan’s Leading Gourmet Area
Tohoku and Niigata: Videos That Will Make You Want to Book Your Trip to Japan NOW
Fun in Tohoku and Aomori: Sightseeing, Shopping, and More!
*This information is from the time of this article's publication.
*Prices and options mentioned are subject to change.
*Unless stated otherwise, all prices include tax.