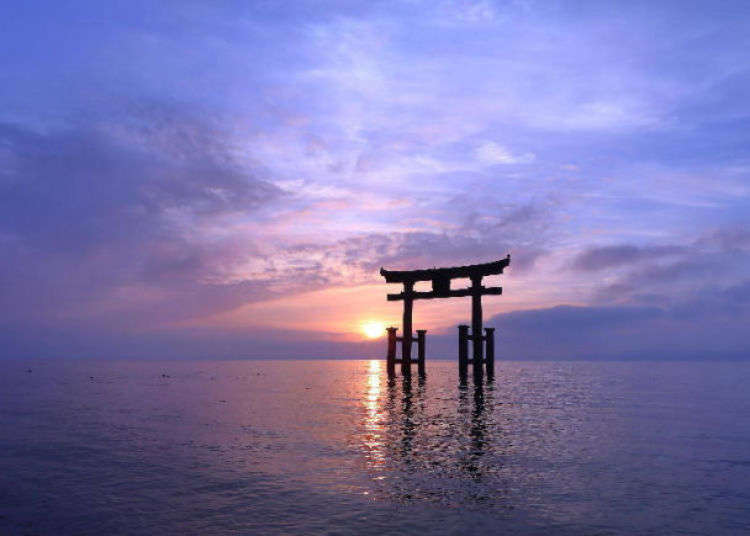 Takashima is a treasure trove of forests, villages, lakes, and other natural sights just northwest of Lake Biwa, in Shiga Prefecture. The area produces about one-third of the water that flows into Lake Biwa annually.

Takashima is also home to many interesting historical sites, such as Shirahige Shrine, the oldest Omi (former name of Shiga) era shrine, the 48 Stone Buddhas, Omizo Castle Ruins, a number of Manyo Monuments, and others.

Start your tour of the area at the Harie district, also known as the Village of Living Water, and slowly make your way downtown. You'll find plenty of natural landscapes and historical buildings co-existing in beautiful harmony, lifting your mood and giving you a good start to your day of activity here. 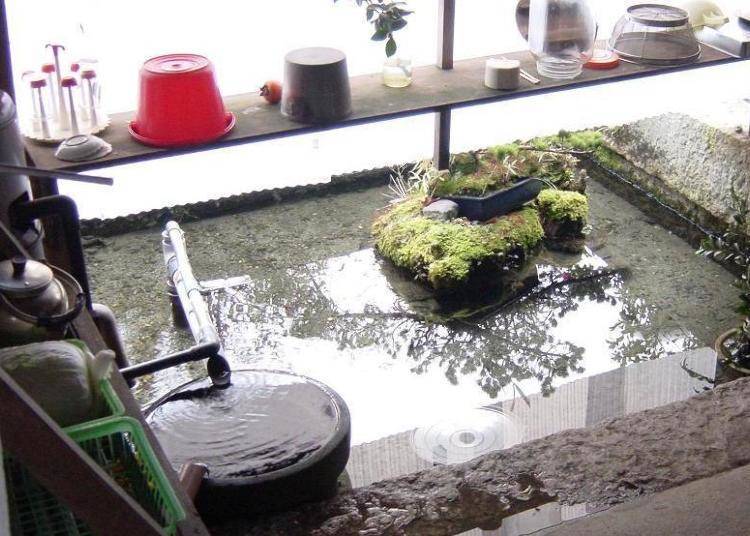 The Harie district is one of the rare few areas in Japan with a settlement that still uses an ancient system of water supply.

When rain or snow falls on the Hira Mountains, it eventually turn into clean and pure underground water sources that bubble up into each household. These spring waters are called shōzu, or living water, and are still being used today in beverages, cooking, and other daily activities. There are currently about 100 houses in Harie's Village of Living Water connected to this kabata system.

How does the kabata work? Basically, the water flows from a underground source called motoike (through metal pipes) to a large basin called tsuboike, then into another basin called hataike.

Water flows out from the motoike and is used carefully as drinking water and for cooking. Next, the tsuboike is for the washing of vegetables or one's face.

Finally, the hataike is where you would wash plates and utensils, letting the food scraps run into the basin where carp is being kept, and it serves as their food.

After the water has thus been filtered by the carp, it returns to the water channel and goes back to nature, completing the cycle of the water's life. This is the system the village has passed down for generations.

Since most kabata are located within private residences, you'll need permission to enter and take a look. If you make a reservation for a tour at least one day in advance, a rural committee guide will take you around.

However, since the guide does not speak foreign languages, it is imperative for you to bring along your own interpreter if you do not know Japanese yourself.

This guided tour will allow you to look around at the various kabata still in active use in this village, drink from them, and examine the setup and carps being used in the system personally.

This high level of eco-lifestyle was designated a national Cultural Landscape for the beautiful scene it creates. Many local and international visitors come here to learn about the village's ways and come into contact with the villagers who practice this lifestyle. 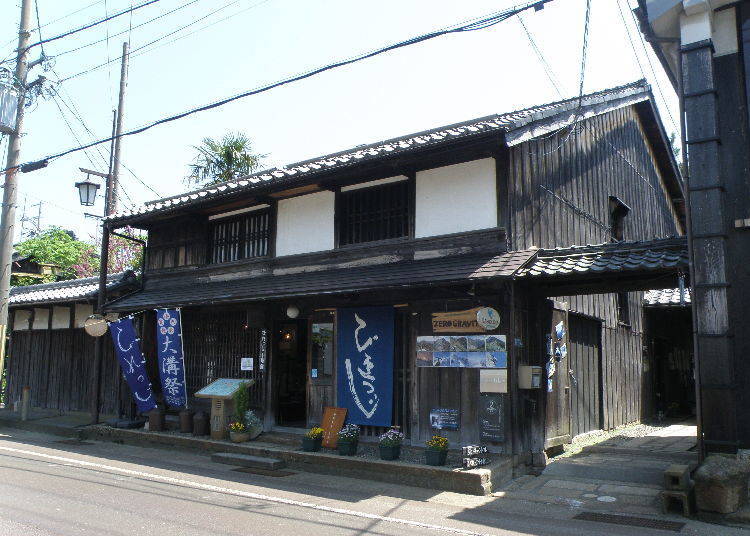 The Katsuno District is an ancient castle town that's full of quaint charm. Relics of its past, such as the olden government outpost known as the jin'ya, grand-looking sōmon gates, and samurai houses can still be seen here.

At a little corner of this district is a 150-years-old merchant house that was refurbished by hand by volunteers from the Chamber of Commerce, gaining a new lease of life as Takashima Village, with a total of eight halls currently.

Although foreign languages are not supported yet, you can still take a walk in the environment of an old-style street while enjoying what it has to offer in terms of food, experiences, and souvenirs. 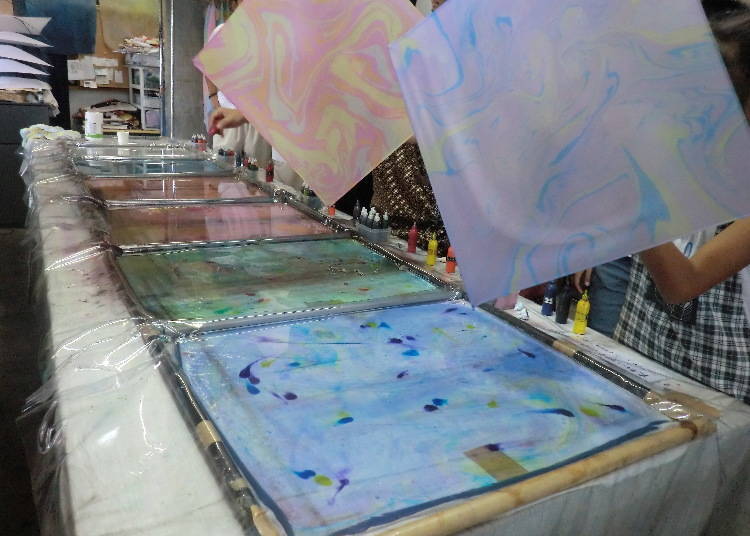 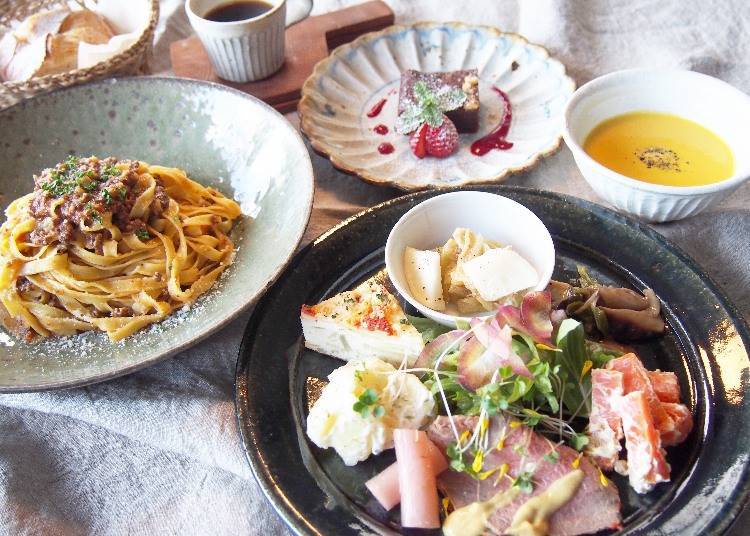 3. Omizo Castle Ruins and Otomega Pond: Seeing the way things used to be 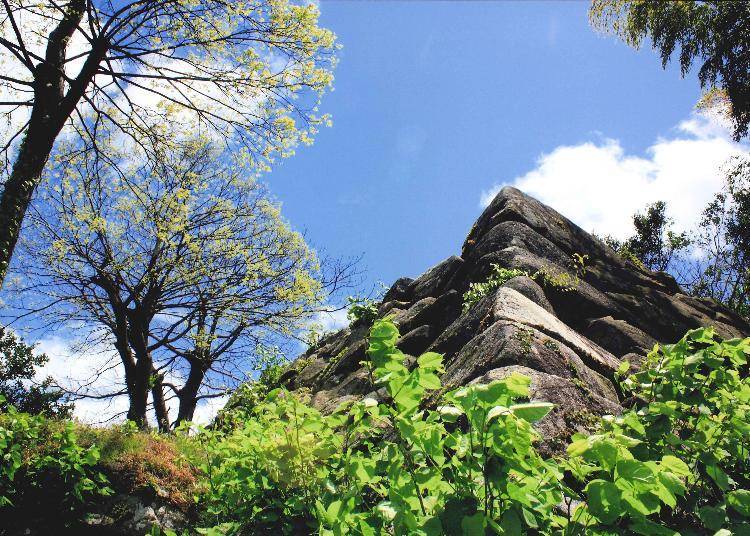 On a hilly forest surrounded by stone walls southeast of Omi-Takashima Station on the JR Lines lies the ruins of Omizo Castle's tower keep. Oda Nobuzumi, who was in Shinjō Castle (the current Shin'ashi Town), fortified it during the Azuchi–Momoyama period (1568 C.E. – 1600 C.E.) and moved merchant houses and shrines into the area to build a castle town. 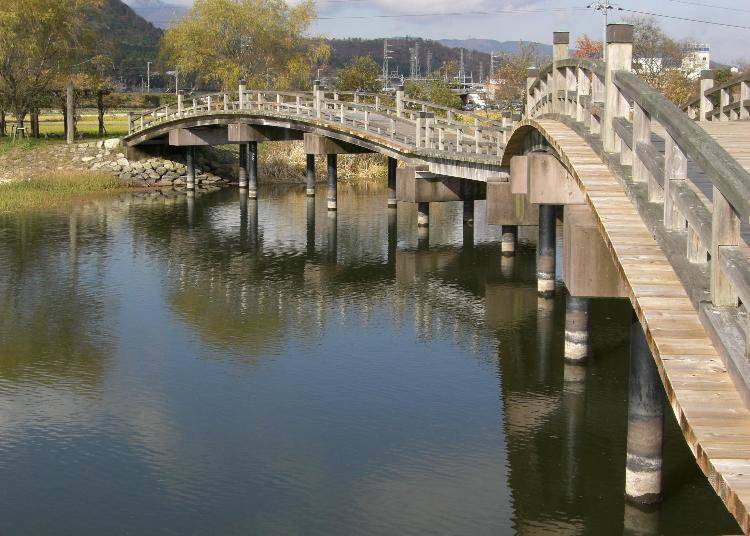 Otomega Pond is an inlet of Lake Biwa that also served as Omizo Castle's outer moat. Nowadays, it's a popular photo spot for tourists.

We highly recommend trying to get the beautiful humpback bridge into the photograph as well!

4. Omizo Festival: A 400-year-long traditional parade float festival held at Kosai every May 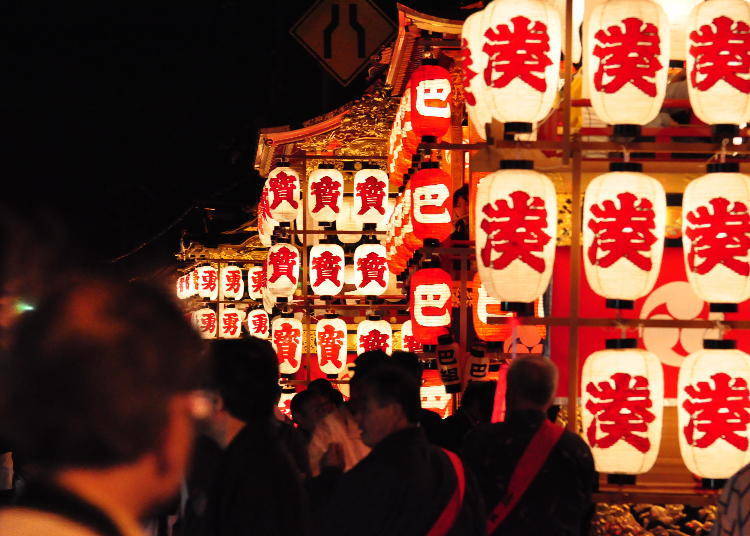 Hiyoshi Shrine, the shrine of Takashima City Katsuno's guardian god, holds the only parade float festival at Kosai every spring called the Omizo Festival. This traditional festival was selected as the prefecture's Intangible Cultural Heritage in 1983, and ushered in its 400th anniversary of merrymaking in the year 2019. 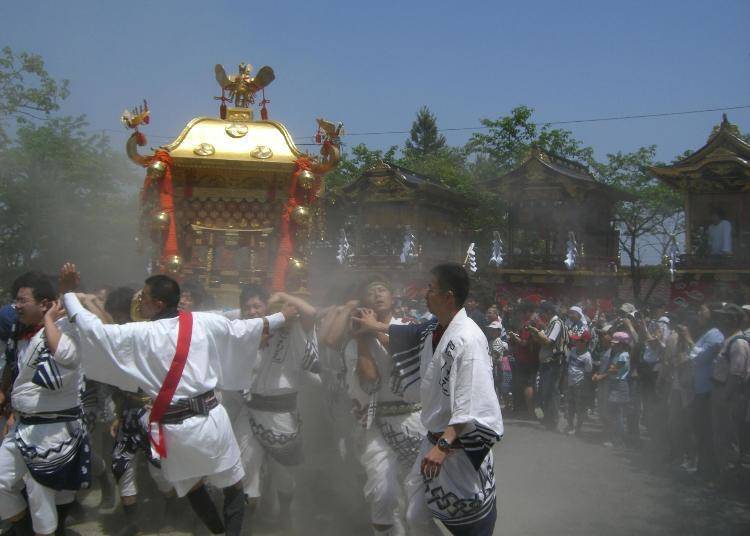 The five basic parade floats are called Minato, Tomoe, Takara, Isamu, and Ryū. These old-style floats are paraded around town to the accompaniment of drums and handbells.

The Yoimiya Festival, or festival eve takes place on May the 3rd, and young participants will manipulate parade floats into different directions with great strength in what is known as the tsuji-mawari. When the sun starts to set, the five basic parade floats are lit up as they gather at Omizo alley. Their illuminations reflecting off the surface of Lake Biwa makes for a surreal and fantastical sight.

On the day of the festival on the 4th, watch out for the parade floats as they change into their extravagant and gorgeous outfits, along with the mikoshi, or portable shrine being carried through the turf.

There's also a mochi-throwing event that anyone can take part in. You might even want to get one of those red-and-white mochi rice cakes used for the event as a lucky charm! 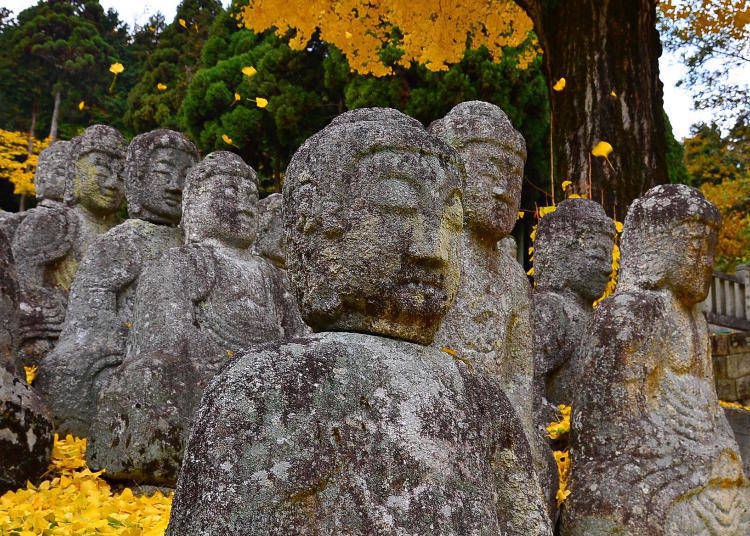 Head north after turning into the old West Omi Road near Shirahigehama along National Route 161 to arrive at a grassy mountain cemetery, where a group of Amitabha Tathagata Buddha statues sit. These statues were carved out from granite rock and stand at 1.6 meters, or 5.2 feet tall.

During the late Muromachi Period (1336 C.E. to 1573 C.E.), the owner of Kannonji Castle, Sasaki Rokkaku Yoshikata built this monument on the shores of Ukawa opposite Lake Biwa as a memorial for his mother's passing.

The aura these rows of silent stone statues give off is quite intense. Each statue has a slightly different size, and their facial expressions range from compassionate to guileless, and there's even one with an amused face! Why not make it your mission to look for the statue that speaks to you the most? 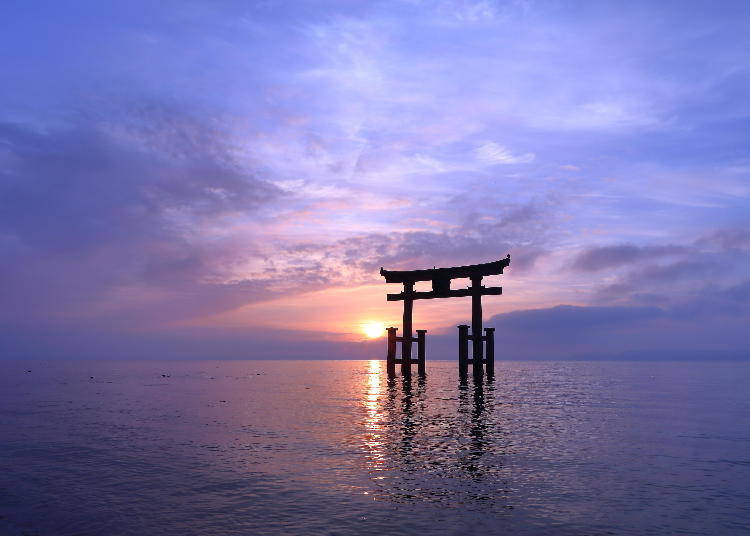 Omi's oldest shrine, Shirahige Shrine has a beautiful large lake torii gate that floats above the water surface of Lake Biwa, making it a popular and scenic place of interest that tourists love to visit no matter the season.

Known affectionately as simply "Shirahige-san" or "Myōjin-san", this is the oldest shrine in Omi's Itsukushima, also known as Miyajima.

Because it's so popular among international visitors, English pamphlets about this tourist hotspot are available for your reading. 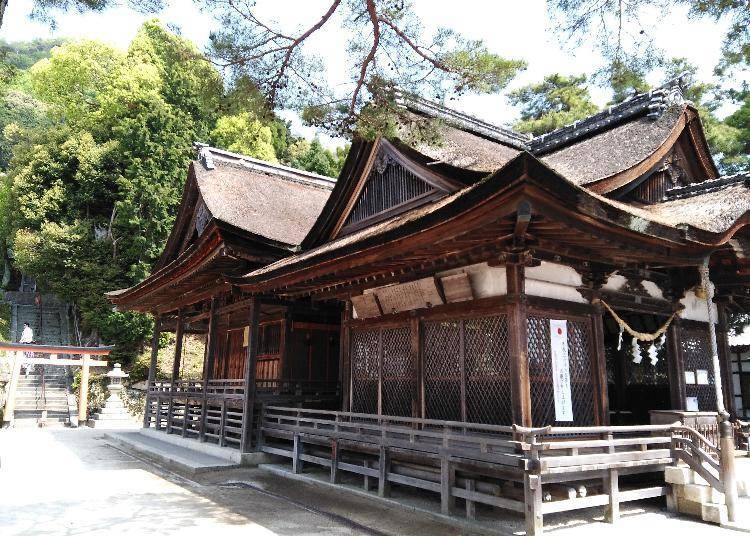 Wedged between the large torii gate and National Route 161 is the shrine itself. The main hall boasts a history of more than 2,000 years and has been designated as an Important Cultural Property of Japan.

The god enshrined here is Sarutahiko-no-Mikoto. He takes on the shape of a hunched old man with white hair and a white beard, and is the god of longevity, as the name of the shrine, Shirahige - which means "white beard" - also suggests. Since he's also seen as the god of livelihoods and guidance for all things, perhaps he may be able to direct you in the right path as well, should you ask nicely!

As you can see, Takashima in Shiga is a great place to visit for leisurely strolls around historical buildings and to bask in an atmosphere that inspired ancient poets.

There are English language websites and pamphlets in some locations introducing some of the more popular places, but you'll also need to invest in an interpreter for locations such as Harie's Village of Living Waters, so your mileage may vary.

Look up as much information as you can about the places of interest you're keen to visit and enjoy the colorful and beautiful scenery of the largest lake in Japan, as well as the historical buildings in the vicinity that co-exist peacefully with the natural environment.

Beginner's Guide to Shiga - Sightseeing Highlights Around Japan's Lake Biwa Region
*This information is from the time of this article's publication.
*Prices and options mentioned are subject to change.
*Unless stated otherwise, all prices include tax.